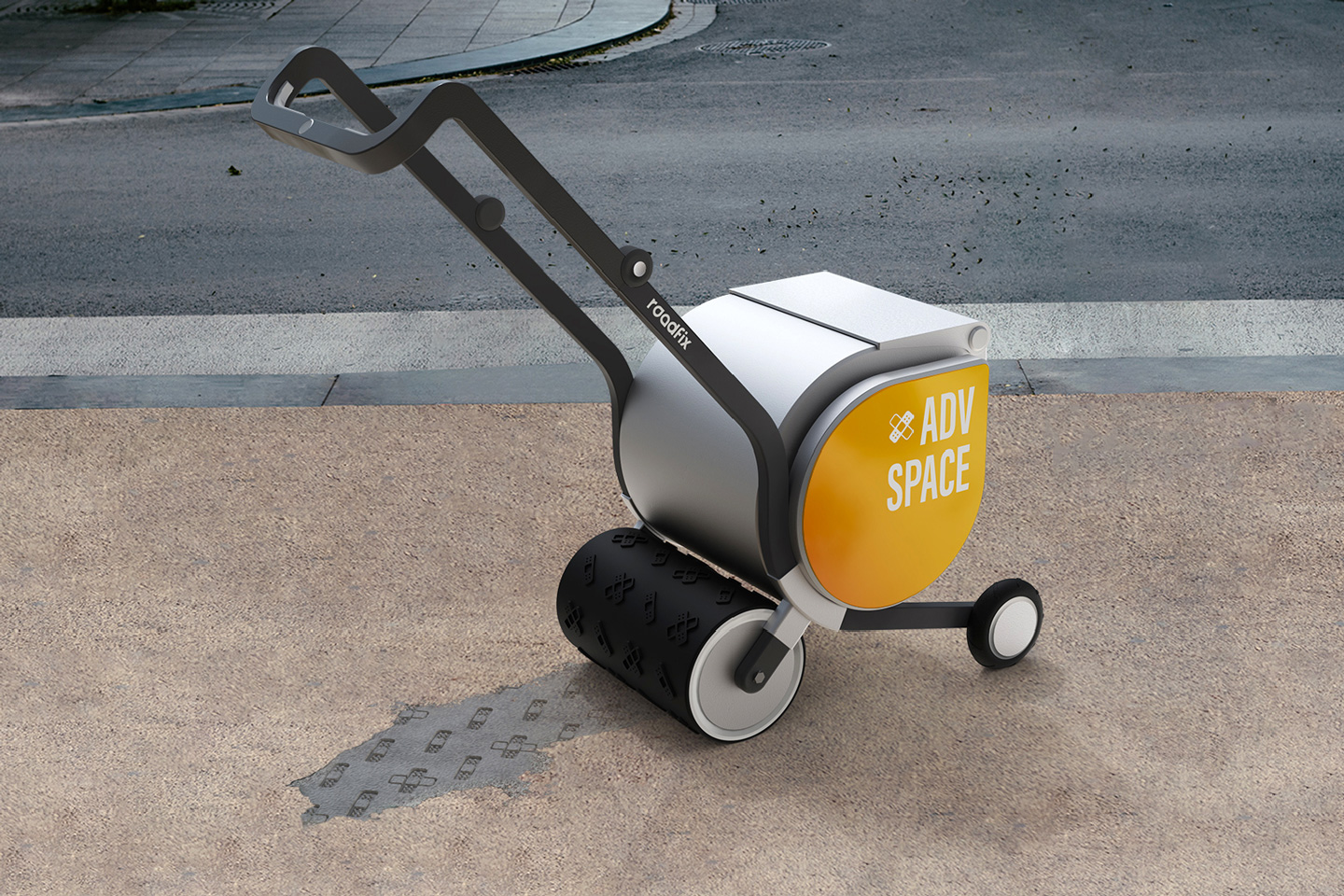 Have you ever looked at a pothole on the road and thought, “Hey, that would be a good place for an ad”? Me neither… but this Dyson Award-winning trolley turns bad roadways into an opportunity for brand marketing.

I can’t really tell if the Roadfix is dystopic or an incredible idea to get brands more involved in civic maintenance. Either way, the device helps fix holes and cracks in old or badly made roads/pavements, and also provides a neat spot for a company to add their logo… let me explain. 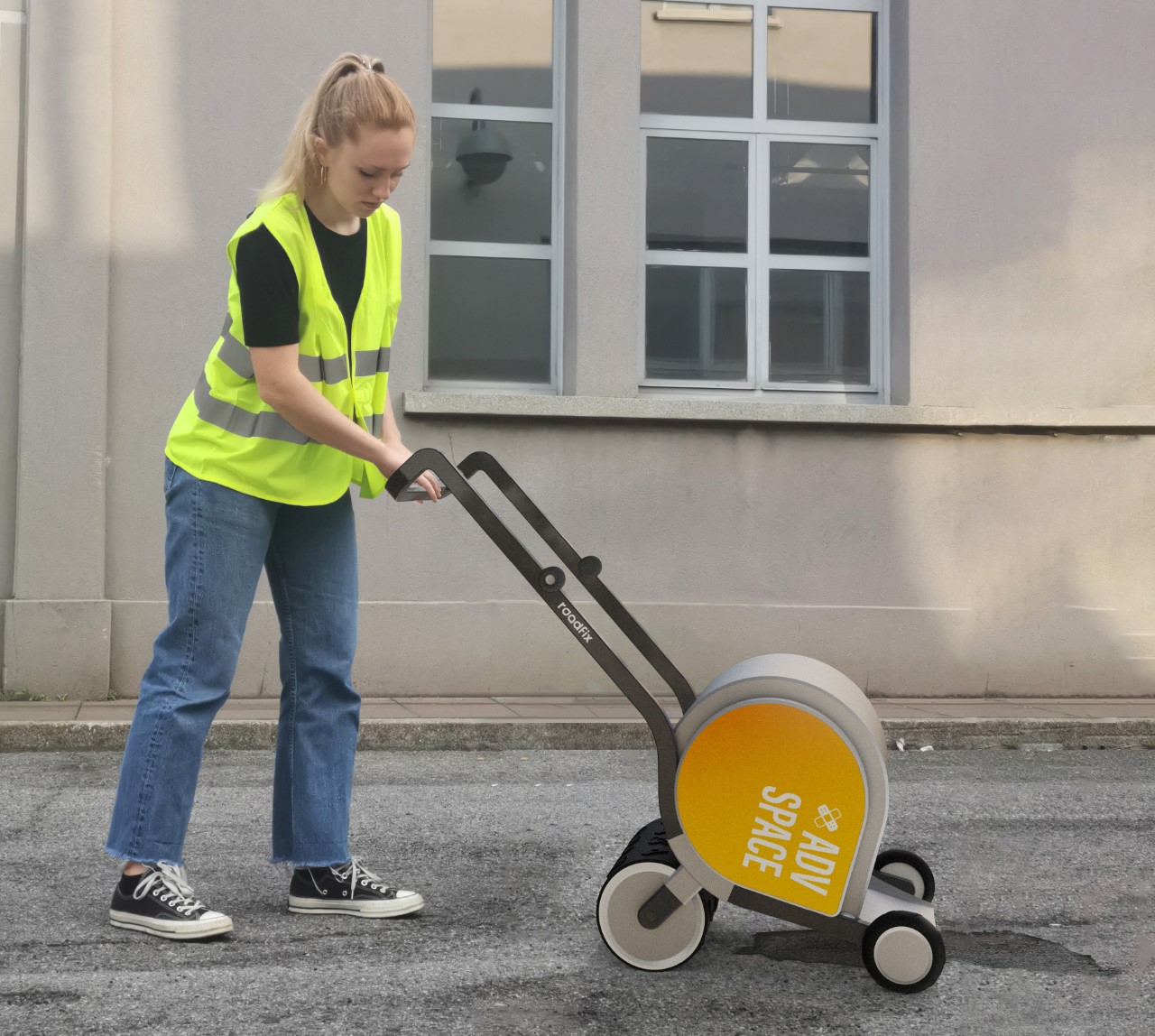 Functioning as a cross between a paint roller and a cookie cutter, the Roadfix is a push-operated trolley-shaped device that easily fills in potholes with concrete. While doing so, it also stamps out a company’s logo on the fresh concrete, acting as a free bit of branding while letting pedestrians know that the brand is involved in maintaining its city.

The way the Roadfix works is simple. Inside the Roadfix’s container, water and cement powder are mixed together using a whisk driven by the electric motor inside the rear wheel. Once the mixture is ready, the operator rotates the box forward using the dedicated button on the handle, while opening the lid with the other button to release the concrete from the bottom effectively filling the pothole. Simultaneously, a custom-made roller with a company’s branding/logo will roll on the wet concrete, compacting it while also leaving behind an impression of the logo, like a stamp. 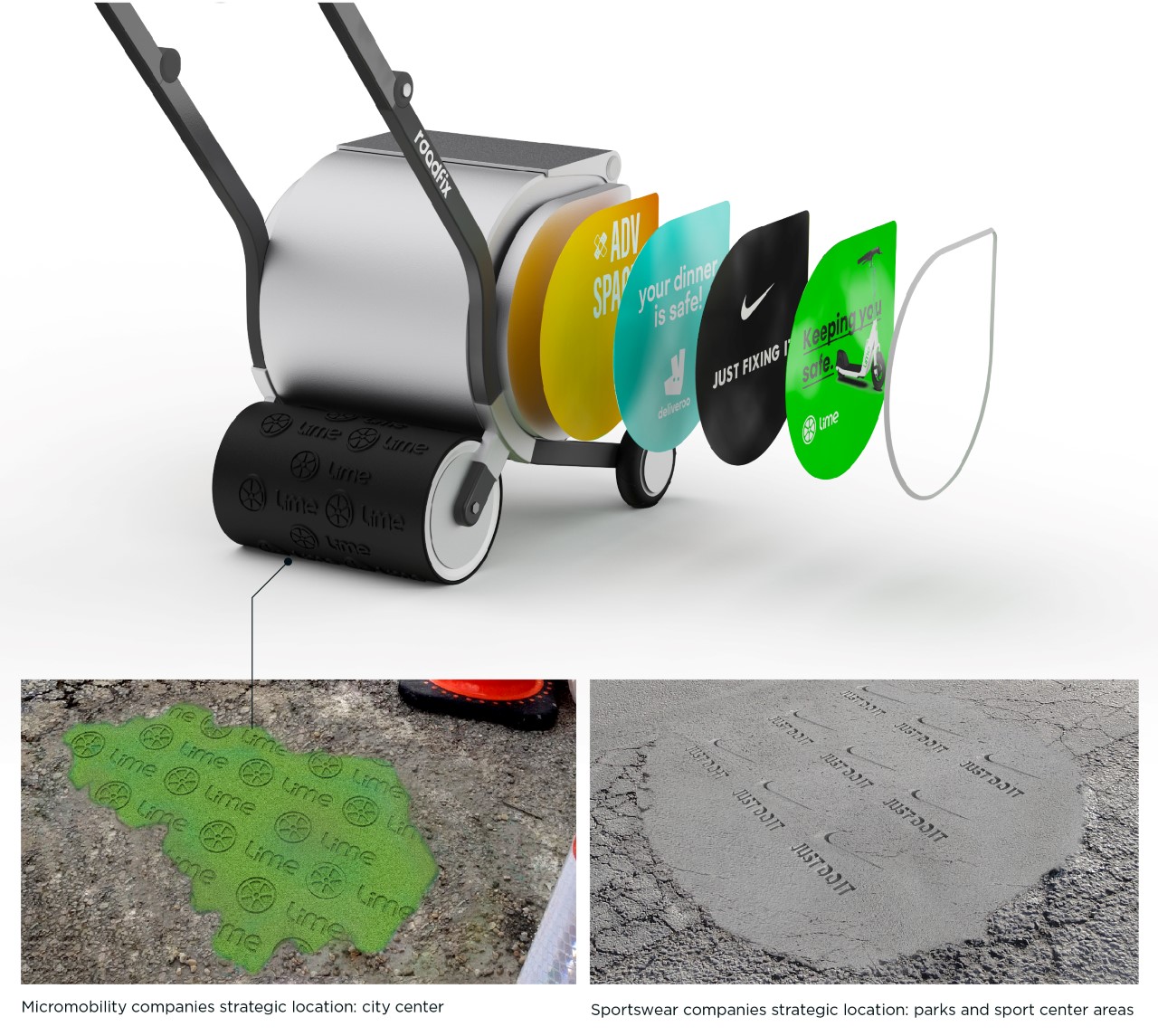 The idea for the Roadfix came to a bunch of Italian designers as the best way to maintain roadways by enticing large companies and institutions with the prospect of free branding. While civic maintenance is usually up to the local municipality, the Roadfix privatizes it in a way, allowing advertising companies and private companies to involve themselves in repairing and maintaining a city’s infrastructure. While this does set a precedent that allows capitalism to literally cement itself into our societies, it really helps private entities maintain their neighborhoods without having to deal with the slow-moving nature of bureaucratic institutions like a city municipality. In this instance, advertising companies will partner with the municipalities and get Roadfix trollies through them. Using this as just one of their many offerings (like billboards, posters, social reach), ad companies can then reach out to businesses to help promote them. 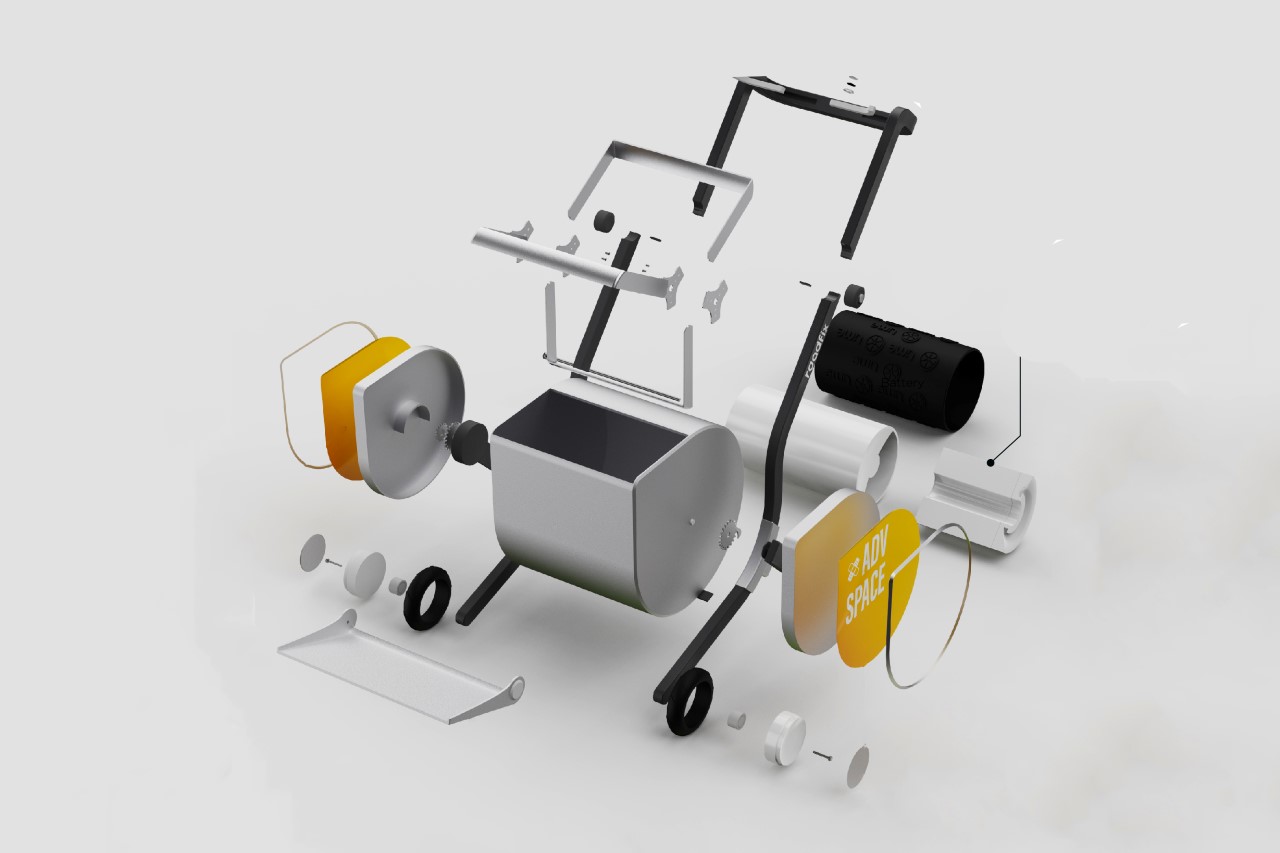 Domino’s Pizza tried something similar in Texas back in 2018, partnering with CP+B (an ad agency) over the campaign. Claiming that bad and bumpy roads were ultimately affecting the quality of their pizza as they were being delivered, Domino’s arranged for a maintenance crew to fill major potholes on roads and even had the filled holes spray-painted with the company’s branding. The Roadfix aims at turning that one-off campaign into a more regular occurrence. This way, private entities, and ad agencies are incentivized to be much more invested in keeping their roads and pavements pothole-free, while the city municipality can rest assured knowing that the city’s infrastructure is being maintained.

A National Winner of the James Dyson Award, Roadfix now progresses to the international leg of the award program, with the results being announced on October 13th. 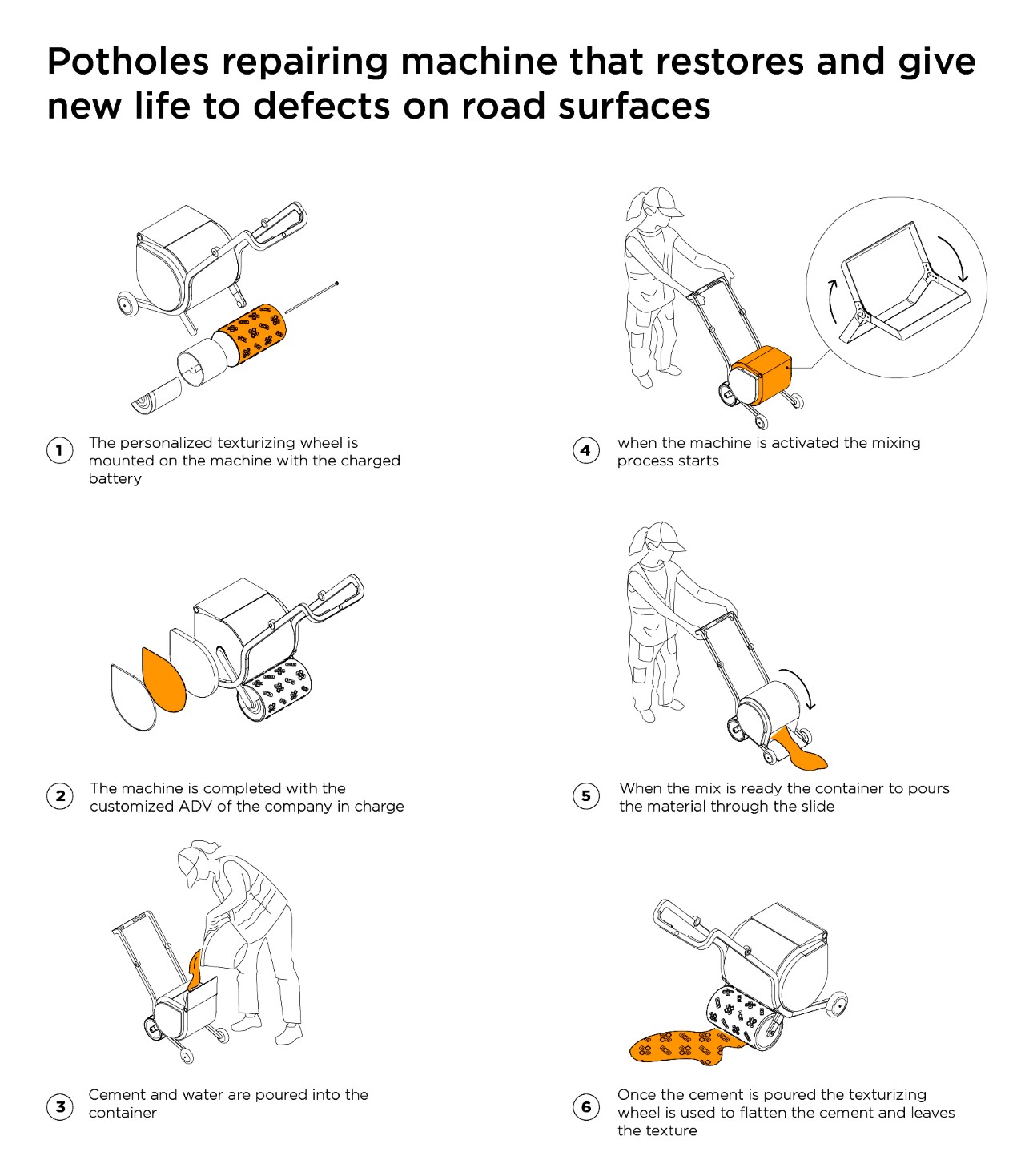 20 A’ Design Award winning buildings that make us drool!

Technically, the Shiny Movie Ticket is a winner of the best idea of the last decade (rather than the decade we’re currently in), since it…

Getting creative with traditional material is the key to making architectural structures truly stand out. This Wall House designed by CTA Creative Architects shows that…

Everything you want in a solar cooker, it’s right here, right now, in this “Solar Ibex.” You can cook whatever you want, too, not just…