I recall the unfortunate story of CNN Analyst Jeffrey Toobin, who went viral in October last year for all the wrong reasons. Toobin was caught exposing himself on a Zoom call at work, although he impassionately claimed that he thought his camera was switched off. While we can spend the entire day justifying or condemning Toobin’s actions, the bigger story remains – video-calling UI sucks. There isn’t a standardized UI template for different apps across different operating systems, and the interface changes so drastically between mobile and web-based video-chats that Toobin’s story is just one among thousands of others… of people who accidentally left their video on, or their mic on, or even the opposite – where Snoop Dogg’s Twitch account has been on mute for the last 3 streams and he probably hasn’t figured it out yet. The ChonkerKeys aim at fixing that problem. 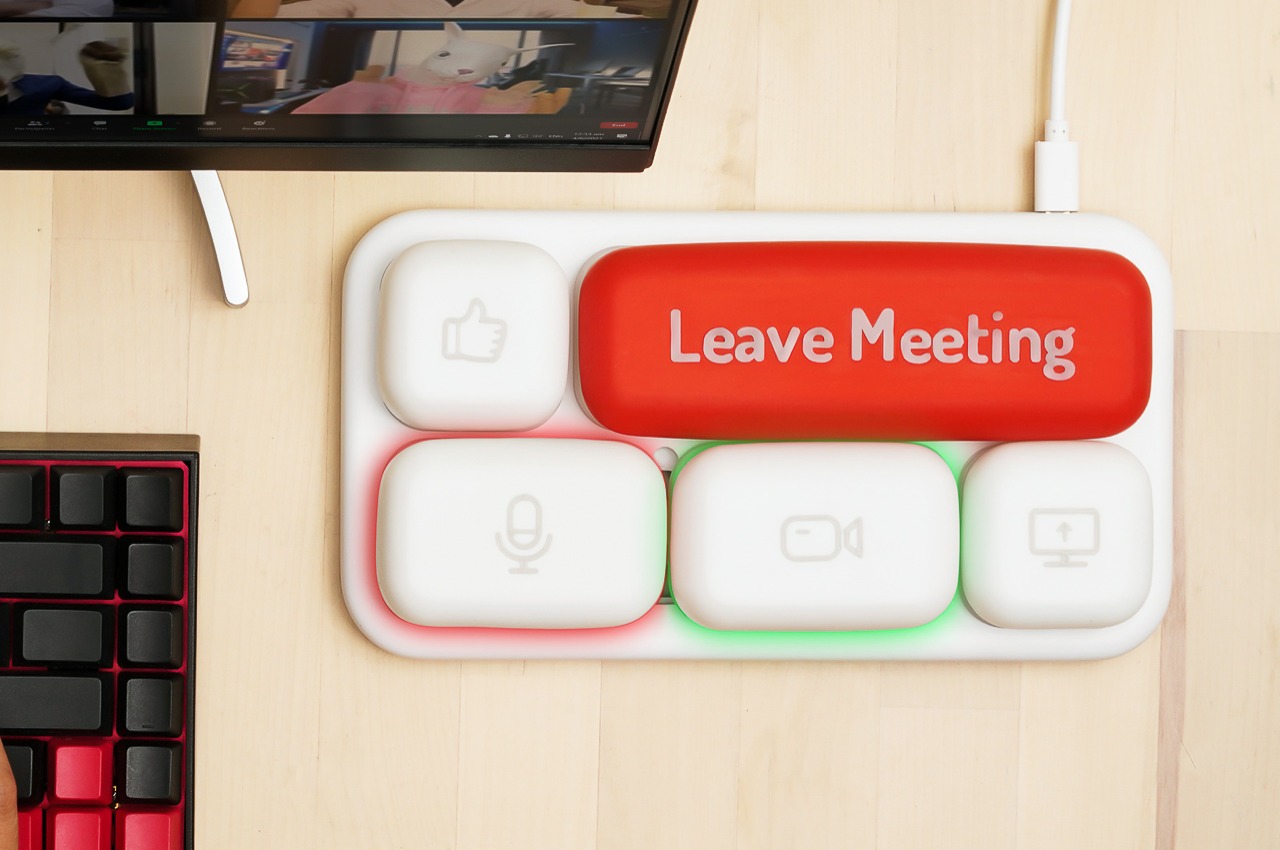 The kind of product to be born out of a meme, the ChonkerKeys are hilarious but they’re also incredibly effective. The keyboard comes with 5 comically oversized keys that let you control your video-calling app’s interface through actual hardware. There are buttons for toggling on and off your camera or your mic, a thumbs-up button, a share-screen button, and a massive Leave Meeting button that lets you make a quick exit without fiddling around on your desktop looking for the right command or control. 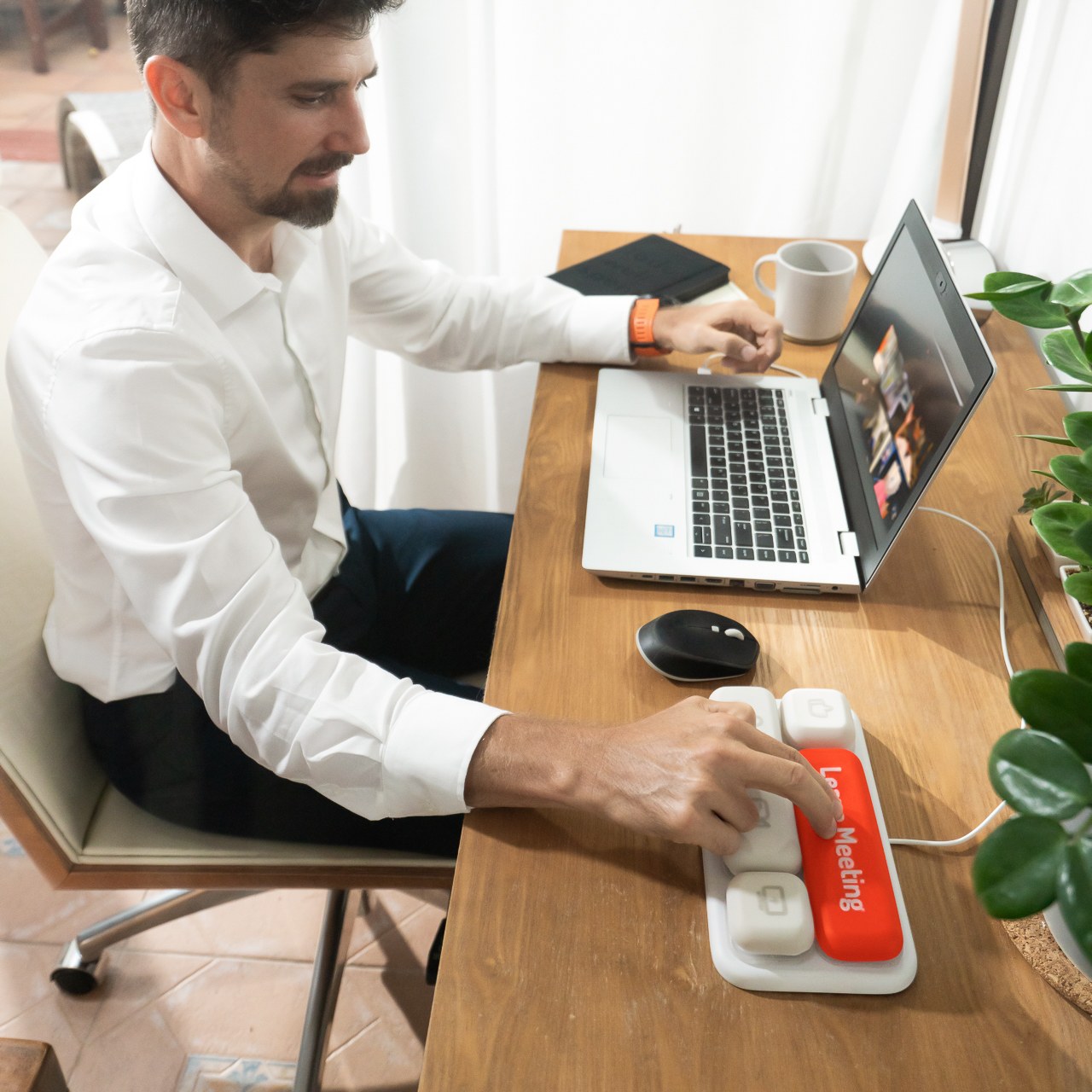 The ChonkerKeys is a wired keyboard that’s built to be compatible with video-chatting/presentation apps. At present, the prototype is reported to work with Zoom, Microsoft Teams, Skype, and FaceTime. More apps such as Google Meet, Cisco Webex will be added as ChonkerKeys software development continues. Plugging in via USB-C, the keyboard works on apps across Windows, MacOS, and even iPadOS devices. 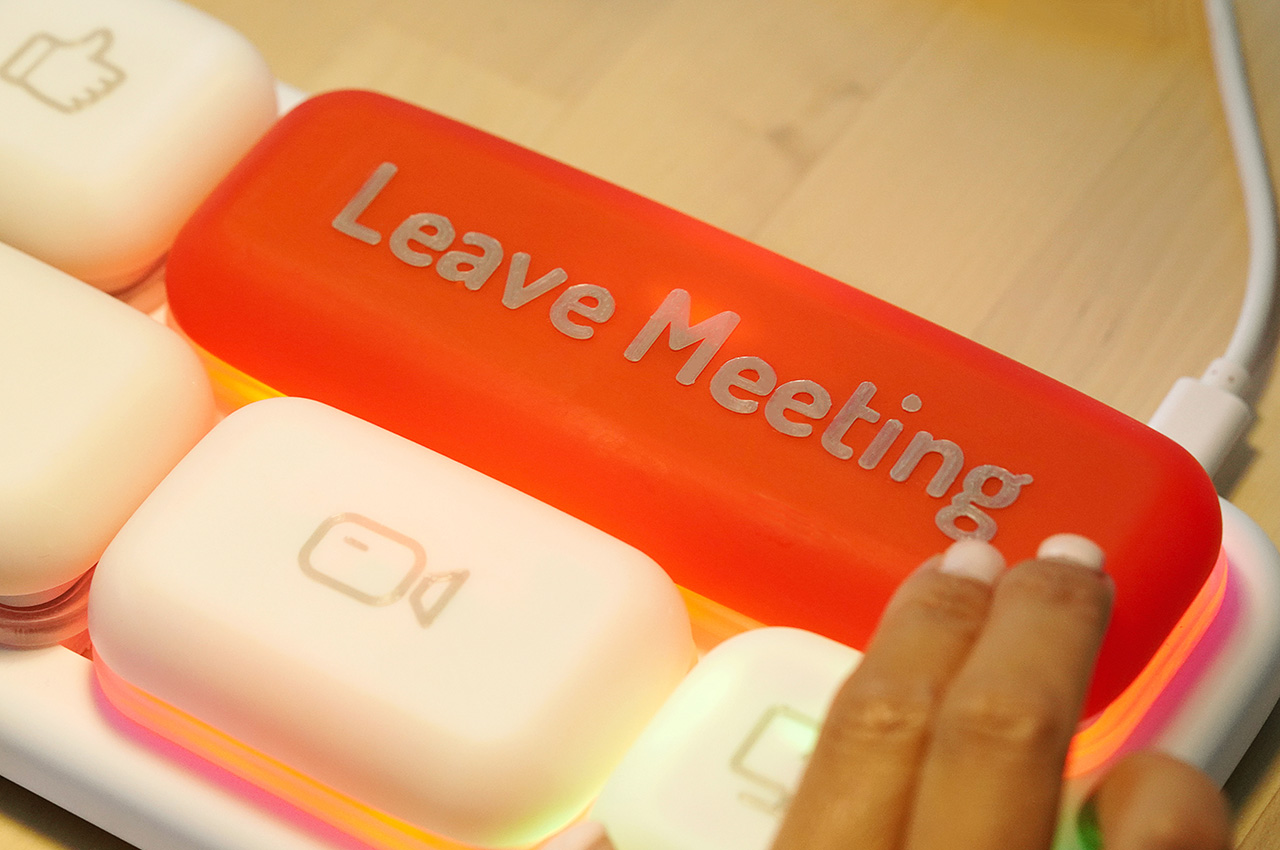 Designed to work as incredibly effective (and intuitive) shortcut keys, the ChonkerKeys are large, making them difficult to miss, and even come with a backlight that lights up in red or green, letting you know if your mic/camera is off or on respectively. In short, it provides that tactile and visual feedback that a desktop application sometimes doesn’t, and makes it easy to follow ‘online etiquette’.

Moreover, the keys aren’t arranged in a fixed layout. Designed solely around YOUR convenience, they can be shifted around, letting you customize the layout to suit your needs, and with the ChonkerKeys app, you can even customize what each button does for other programs, allowing the keyboard to play/pause your Netflix shows and YouTube videos. 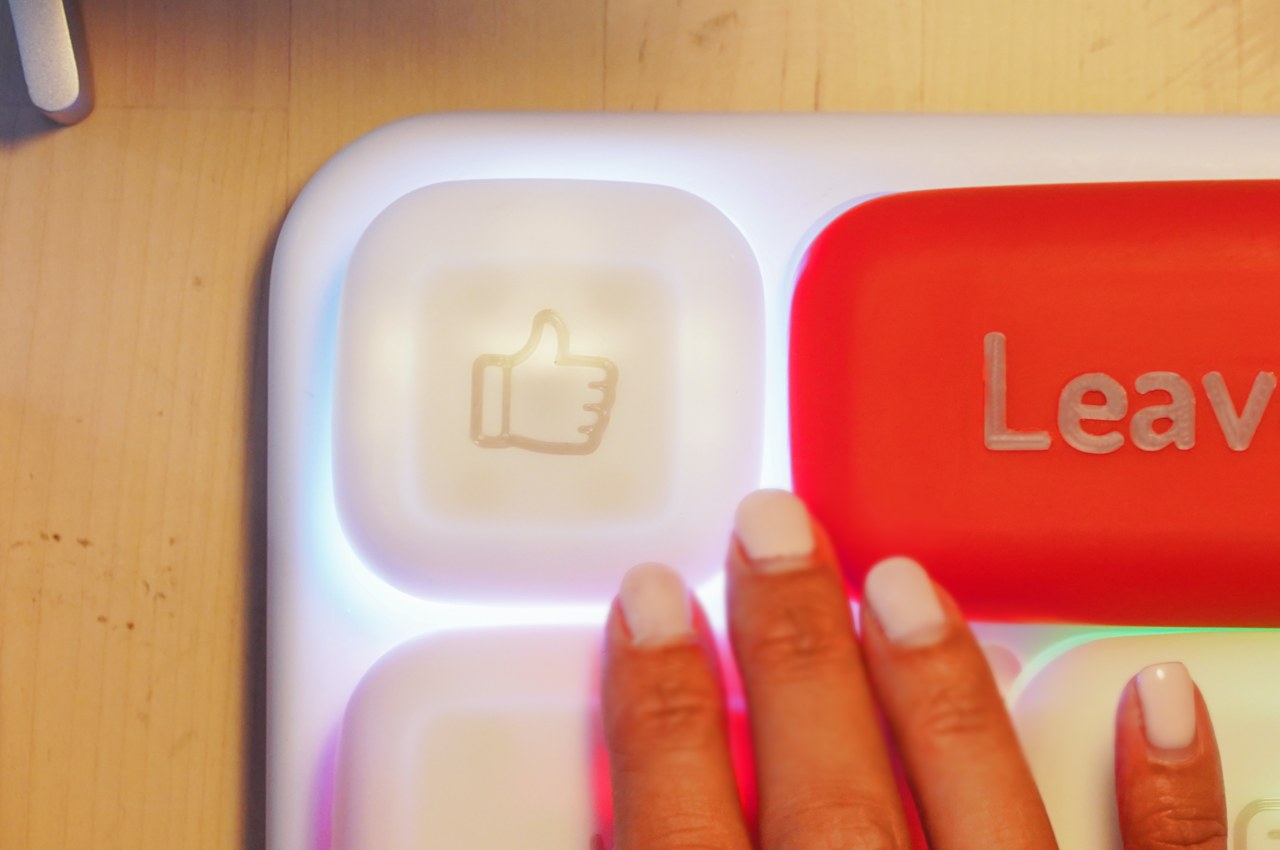 The massive keyboard layout definitely looks comical, but consider it an effective caricature of exactly what’s wrong with apps today. Screens have multiple controls, and buttons are more often than not extremely tiny and difficult to locate. ChonkerKeys’ large mochi-ball-shaped buttons are incredibly tactile and make for quicker, easier control, providing a perfect solution for professionals, teachers, young students, and even as someone on Reddit commented, people with Parkinson’s. 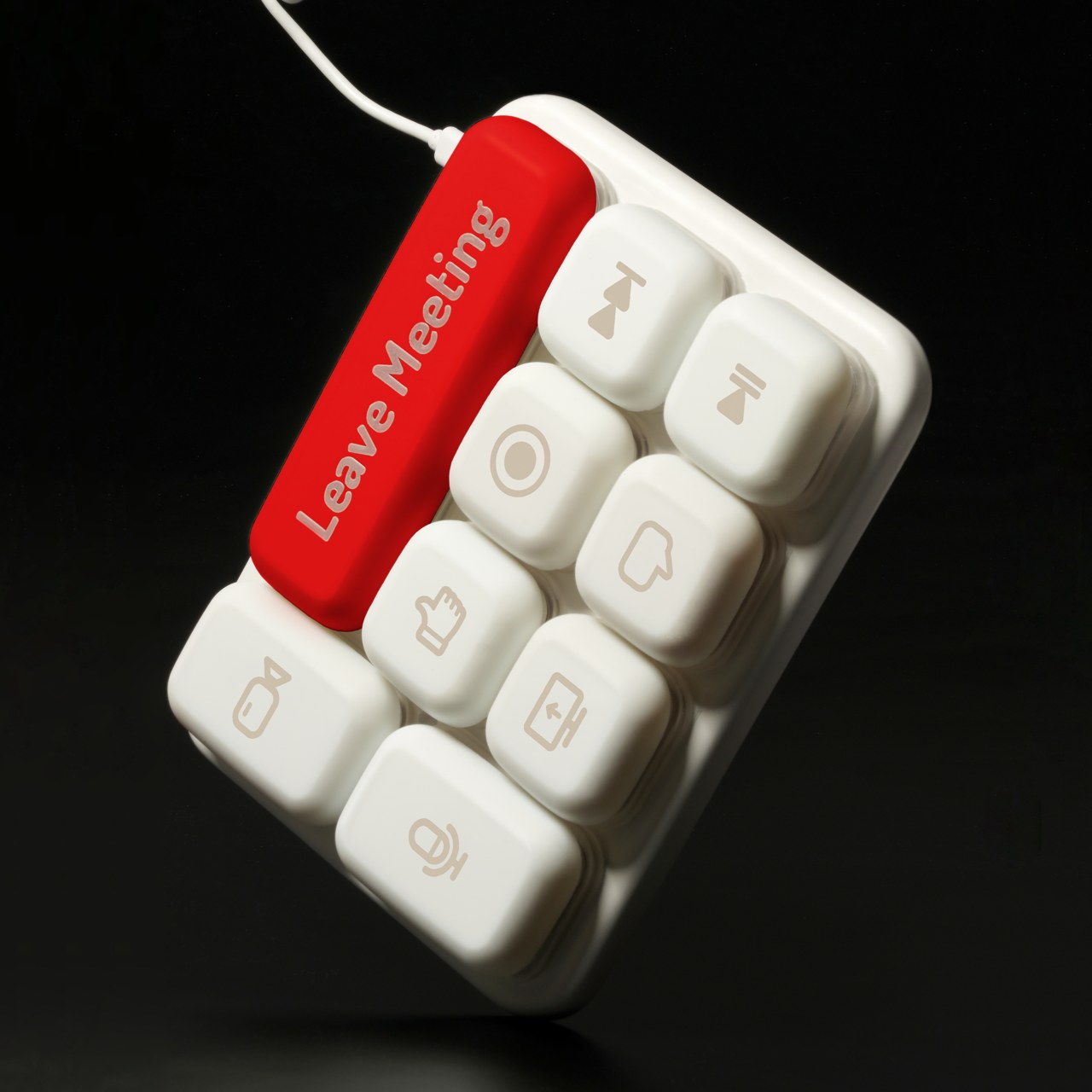 The Max model gives you three extra 1u* keys.

The ChonkerKeys come in two sizes, The Original, with the 5 aforementioned keys, and The Max, with 9 keys (including record, play, pause, etc. for video content creators). The keyboard ships with a coiled USB-C cable to connect it to your devices, a keycap pulling tool to swap out keys, and 3 extra keys that ship along with the Max variant. The ChonkerKeys Original and Max are available for pre-order at $59 and $78 respectively for a limited time and quantity on Kickstarter and come with a standard 1-year warranty that covers any manufacturing and technical issues.

Minimalistic yet extremely versatile, the Aro lamp’s characteristic feature is a sliding ring feature that allows it to be attached to various structures to adapt…

Coz I’m In A Mushy Mood

At YD we are getting all charged up about Valentines, Ah! We are the lovable bunch, how else do you think our multi-cultural team would…

Chances are that in the amount of time it took you to read this sentence, the AIRmini could transfer a single 4K movie without breaking…

MOFT’s latest Smart Desk Mat lets you easily set up and organize a portable, angle-adjustable workspace with all your devices

https://www.kickstarter.com/projects/moft/moft-smart-desk-mat-snap-stand-up-organize-all-your-devices The MOFT Smart Desk Mat turns your entire workspace into a MagSafe productivity dream. The mat’s magnetic surface can be adjusted at any angle,…