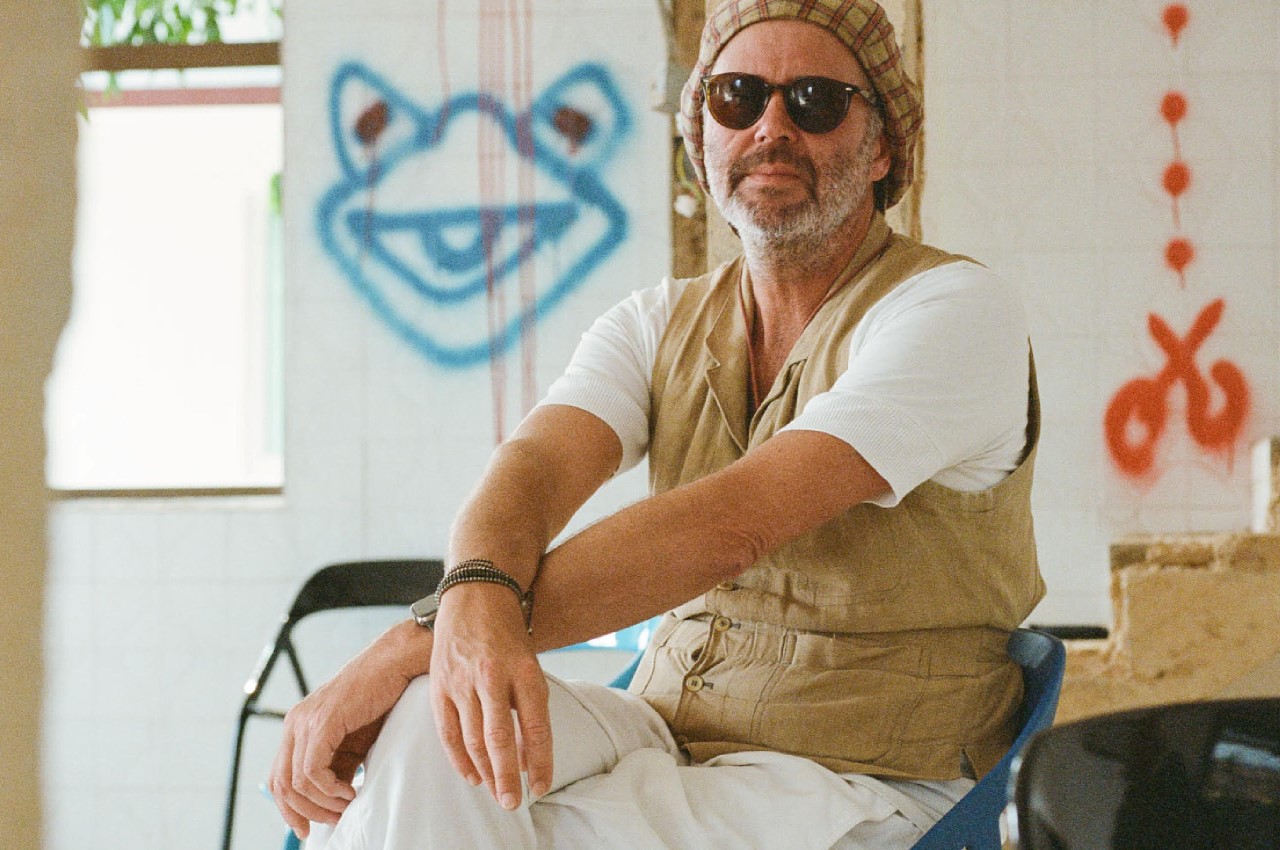 It’s really difficult to pinpoint Michael Young’s style. A lot of designers develop a very recognizable quality that allows you to box their work into a certain category, but that’s far from true in the case of Hong Kong-based Industrial Designer Michael Young. Young’s work is best described as experimental, as he dips into a world of creativity shaped by his life in Britain, Iceland, Taiwan, Brussels, and finally Hong Kong. Young’s studio specializes in creating modern design through exploring the endless possibilities Asia’s technological ingenuity provides, while constantly pushing to experiment with new materials and see how they inform the design of different products within different categories.

Yanko Design had a chance to reach out to Michael and take a closer look at some of his work from the years gone by. Michael graduated from Kingston University in 1992 and set up his design studio the following year. With nearly 3 decades in the industry, he’s made a name for himself as one of the leading international figures in his field, and the Michael Young Studio aims at providing exclusive, quality design services across an eclectic range of markets – from interiors to technology. His minimalist, elegant, and sophisticated style is a trademark in his body of work, which has always attracted the attention of the industry and has been acquired by public institutions such as the Pompidou Center and the Louvre Museum. “It is Design as Industrial Art that interests me, not just as a limited edition, but on a scale of mass production”, Michael says about his approach to creativity and design. 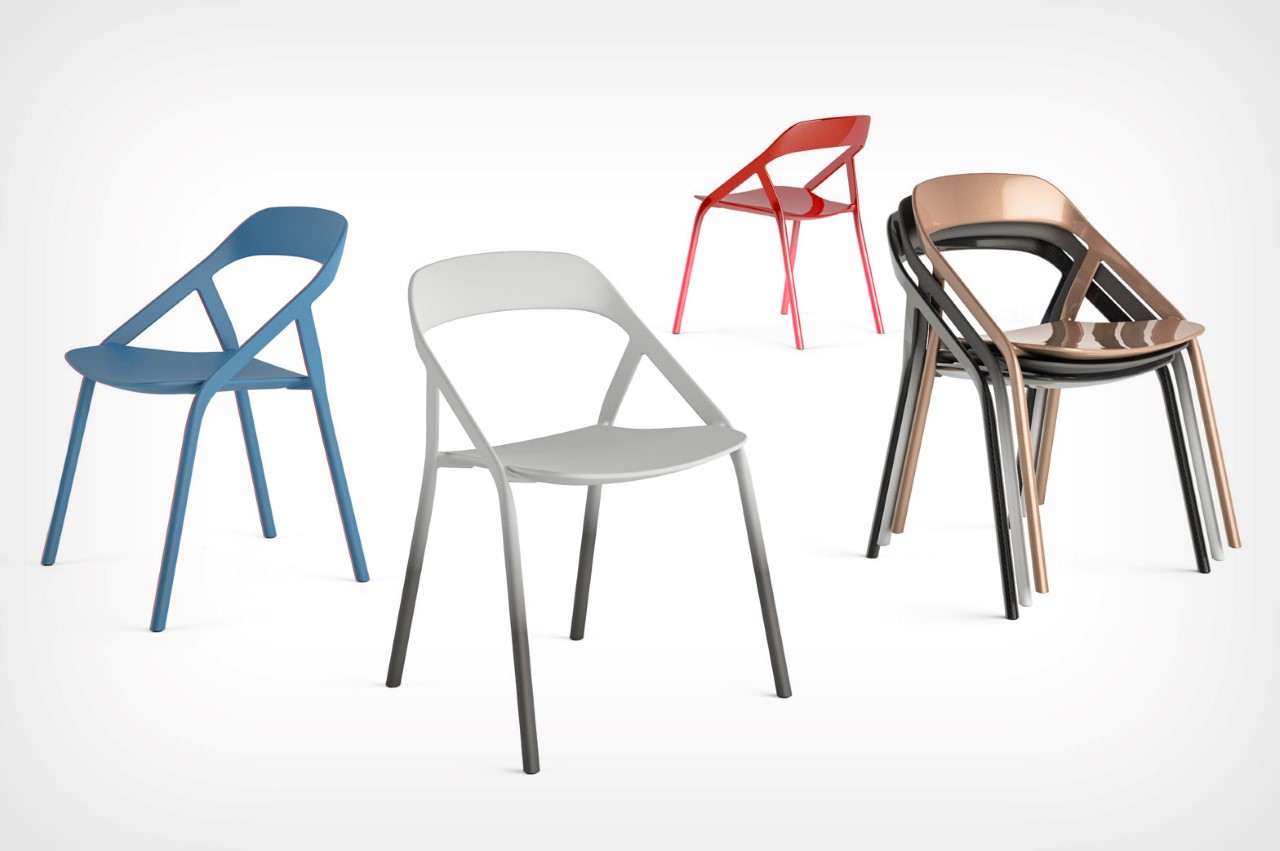 A winner of the iF Gold Award, the LessThanFive chair gets its name from the fact that it weighs less than 5 pounds. Made entirely from carbon-fiber, the chair was a collaborative project between Michael Young and Coalesse, a Steelcase brand. The chair explores carbon fiber as a material for furniture by pushing the boundaries of what the material can do. The chair’s form is so elegantly slim that it can only be made out of carbon fiber (any other material would cause it to buckle), and even though it weighs less than 5 lbs, it can hold a stunning 300lbs of weight! 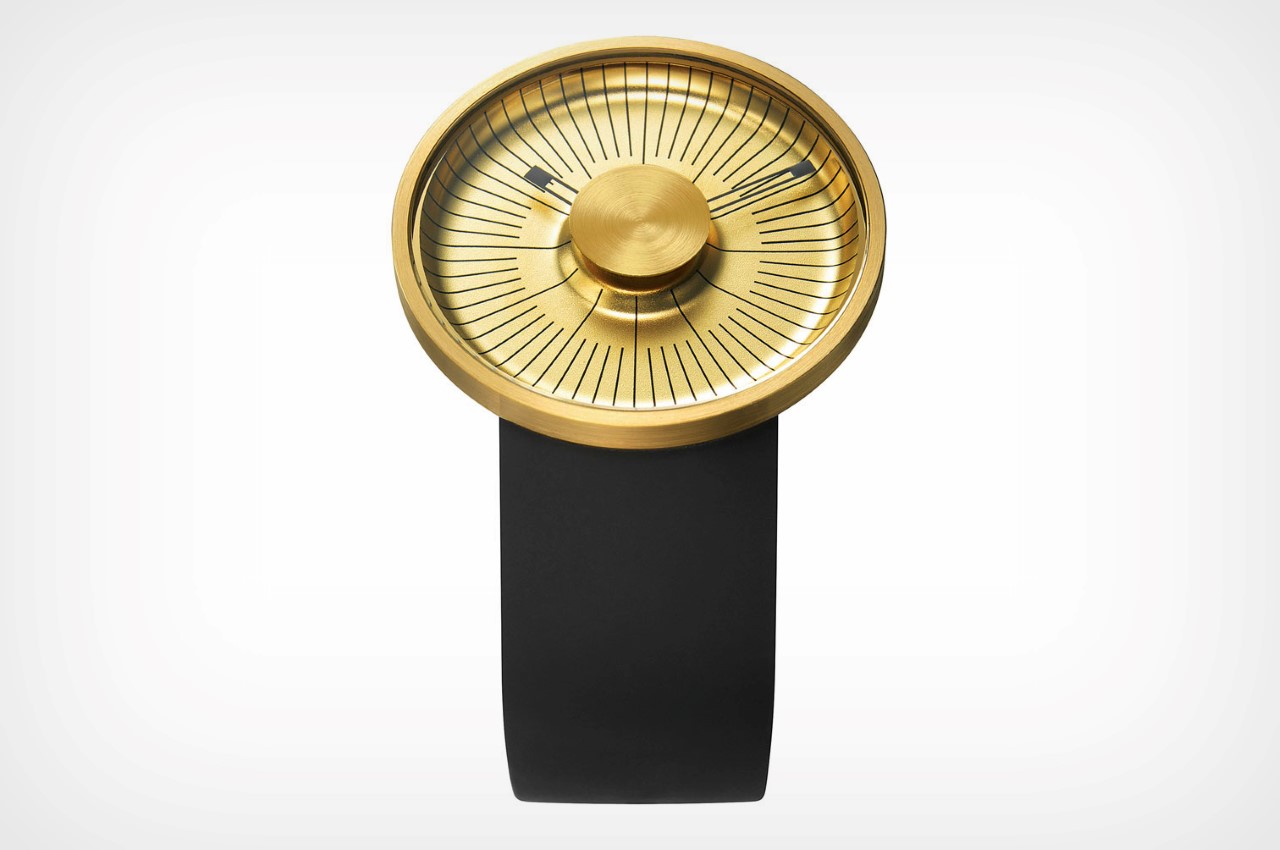 The Hacker Watch encapsulates Young’s east-meets-west approach rather perfectly. “ODM was a local brand and at the time had not worked with an international designer at this level. Paul So, the CEO, is a great thinker and had predicted world timepiece recession, due to smartphones, long before they became household items”, says Young. The watch was designed as a result of this approach, and combined an iconic design along with an affordable price, making the watch instantly desirable, even in an age where people just read the time on their smartphone. The watch was designed and manufactured in 2011, when the smartphone movement had just picked up pace. 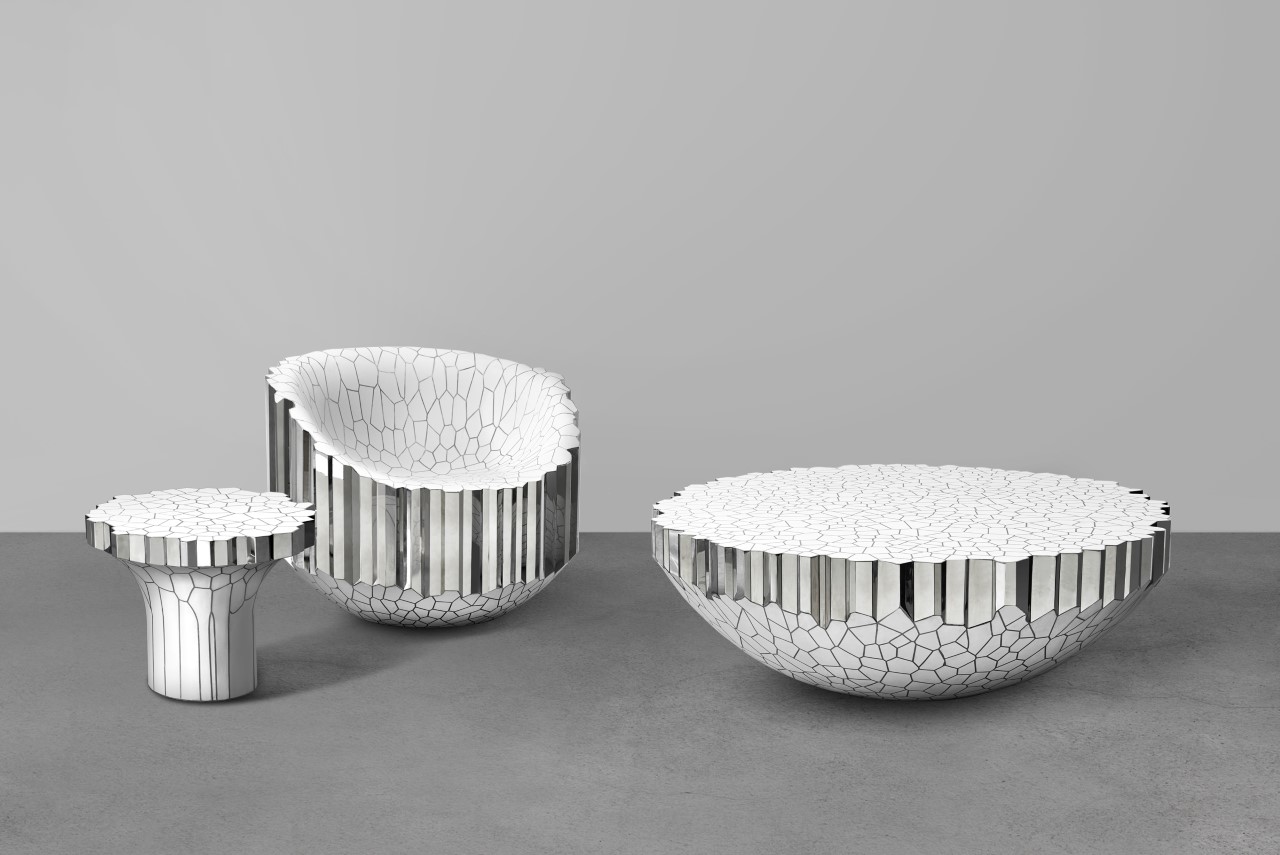 The MY Collection first premiered at Gallery ALL in LA and Beijing, and comprised a chair, a side table, a writing desk, a round coffee table, a console, and a lounge chair. The unusually designed pieces featured polished stainless steel honeycomb frames, inlaid with white enamel surfaces. Each piece consisted of a cluster of hollow metal extrusions capped at each end and covered with enamel, making the furniture look less like conventional home decor and more like eye-catching jewelry. “A while back, I had worked with cloisonné in Northern China and began to look at how patterns and colors came together and how metal could be shaped to create divisions of form”, Michael mentions. “Some of my earlier attempts were inspired by oil on water and the natural patterns generated by this when taken in a snapshot. For Gallery ALL, we looked at these in a new way by self-generating forms created by the computer, and then we extracted the patterns in two-dimensional slices.” 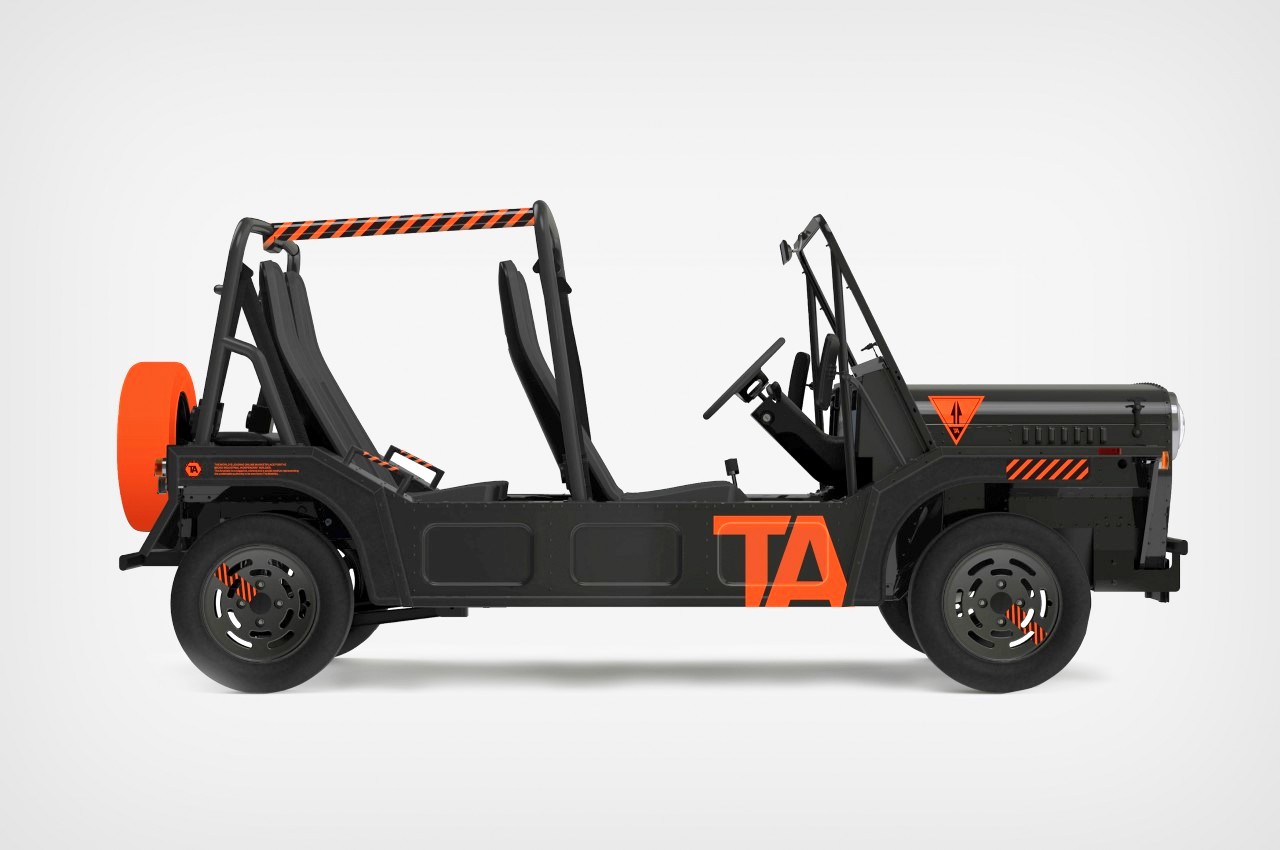 Initially produced to share some of the Mini’s mechanical parts, but with a more rugged body shell to give it a life intended for the beach, the Moke holds its own as a historic and cult car with a rich 50-year history that was sadly put out of production in 1993. However, when Young got an email asking if he would work on redesigning a Moke reissue, he called it a “call of duty as a Moke Enthusiast”. It was essential to strike an equal balance for the old enthusiast and the new generation of Moke drivers, like himself. After redesigning and reengineering more than 160 new parts the MOKE was brought back, better than ever. “It has the same spirit, the same style and is just as suave as the original Moke”, says Young. 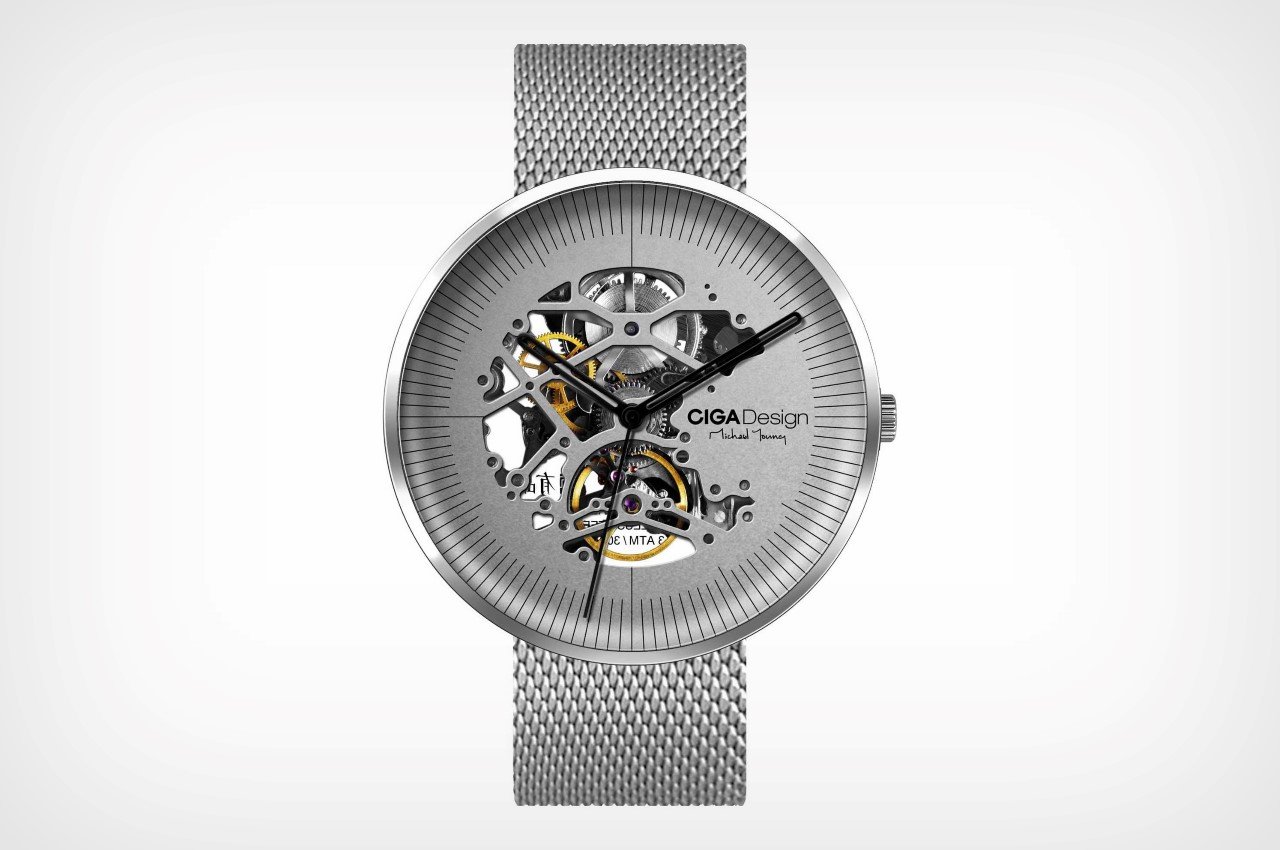 The Template watch hopes to merge the movement and face into one singular piece. It isn’t as much a skeletal watch as it is a work of art that also displays the watch’s fine engineering. Yet another winner of the iF Gold Award, the Template Watch flips the tradition of having a plain watch-face and integrating a transparent exhibition back to showcase the watch’s movement. Instead, the ornately designed watch-face itself lets you peer through and see certain aspects of the watch’s movement. It balances its ‘industrial aesthetic’ with curved edges on the watch-face, that give it a softness to the appearance. 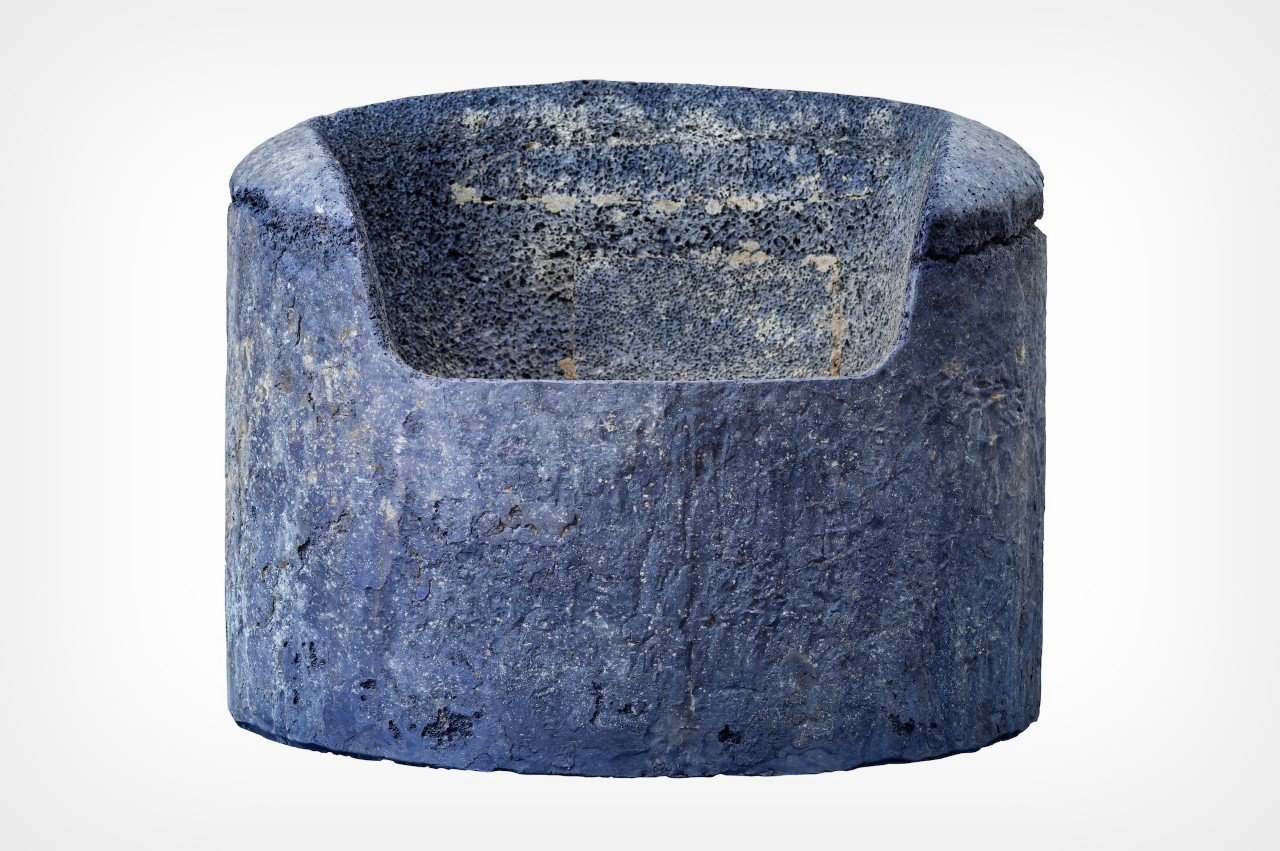 Perhaps one of the most unusual projects in Michael’s body of work, the Oxygen Chair has a strangely relic-esque quality to it… along with an incredibly interesting manufacturing method. The chairs are molded out of aluminum that’s injected into steel casts along with high-temperature gas at immensely high pressures (hence the name Oxygen Chair). The process is somewhat similar to how rocks are formed, and the resulting chair looks less like metal and more like an excavated block of stone with imperfect, porous surfaces that are almost in line with igneous rocks. Finally, to give the furniture its color, it’s coated in a way similar to ceramic glazing, but with absolutely rustic and unusual results. The final chair challenges the archetypes of furniture and craftsmanship, offering a radically experimental manufacturing method that results in chairs fit to be in a museum! 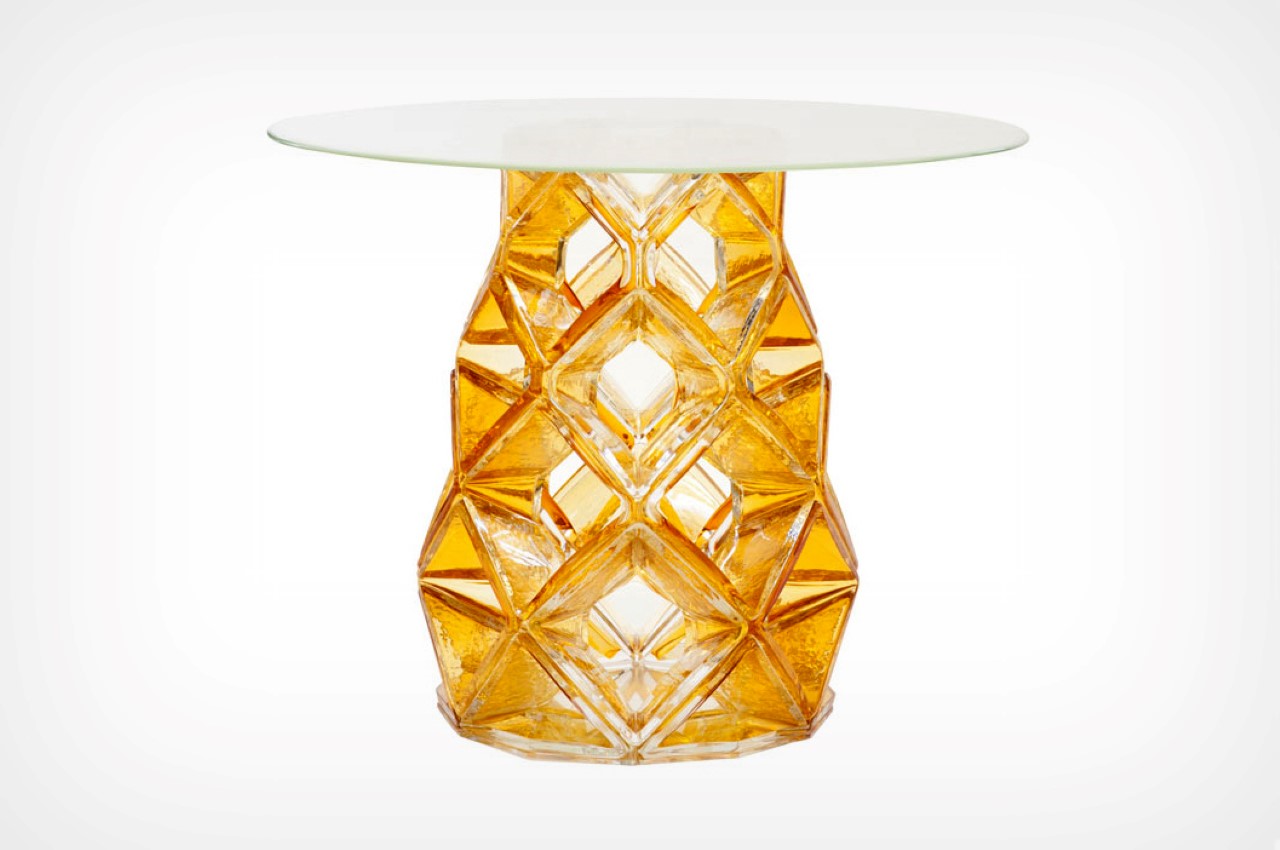 Once again challenging the archetypes of furniture, the Homune Table combines jewelry and furniture design into one absolutely eye-catching final product. The Homune Table’s base comes hand-blown from amber-glass, giving it an almost gem-like appeal that’s accentuated by the geometric design of the base. The honeycomb structure isn’t just an aesthetic detail, but rather gives the table strength too, while the complete glass design really sets it apart as bordering on glass solitaire. 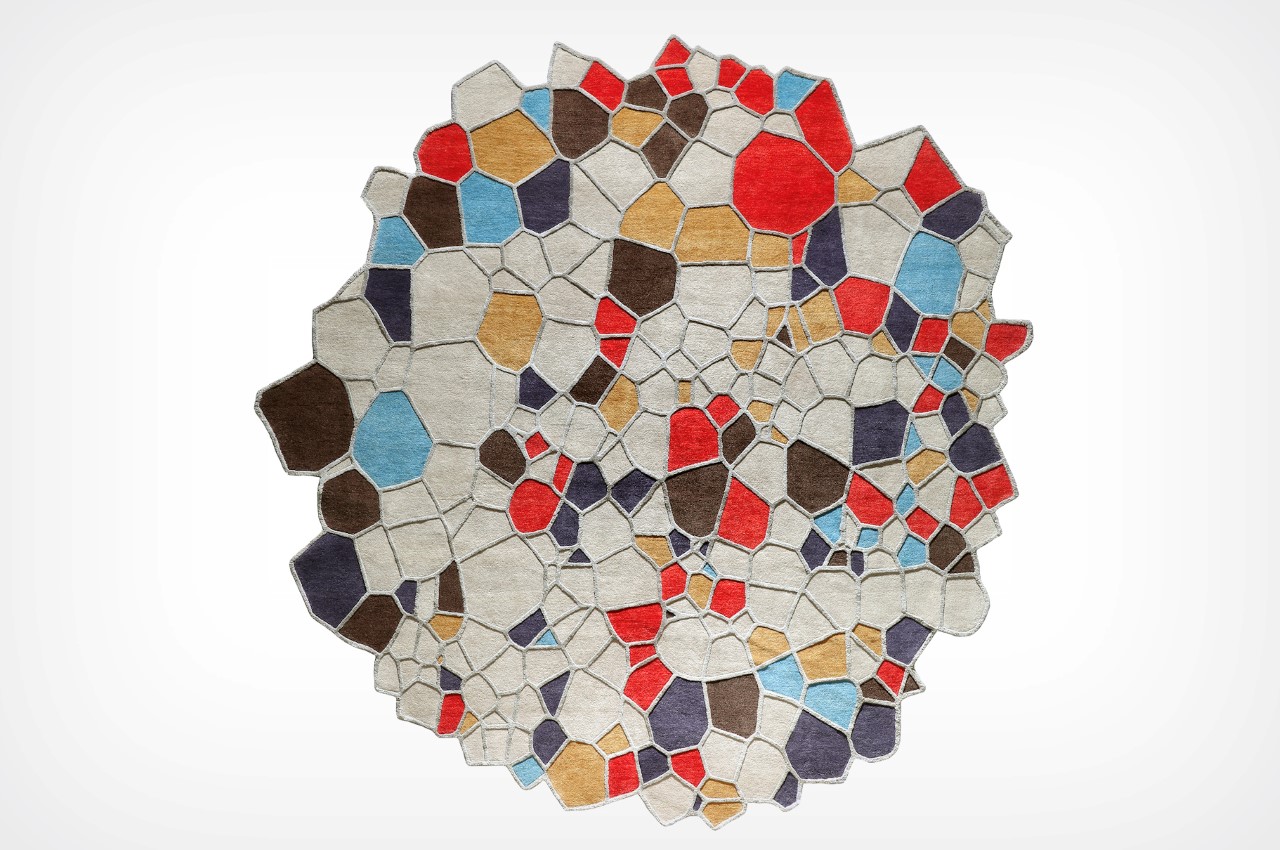 Designed to look less like a fabric rug and more like stained-glass art, the Voronic & Tesselation Rugs is a result of a long-time partnership between Young and rug-company Christopher Farr. The use of voronoi patterns gives the rug an aesthetic that’s a massive deviation from the oriental and occidental rug styles, or even contemporary rugs, that are either rectangular or circular in shape. ‘Voronic’, a hand-knotted rug, and ‘Tessellation’, a hand-tufted version are both designs configured through Young experimenting with a voronoi pattern. This motif is found in nature – where it is perhaps most instantly recognizable as the pattern of a giraffe’s skin, or even in the cellular patterns found on leaves. With various points of shape and color, this rug is infinitely customizable, allowing it to expand as a series, or even be tailor-made to certain spaces/rooms/interior styles.

Young’s work spans nearly three decades, multiple continents, and features clients/brands like Steelcase, Titan, Lacoste, Coca Cola, Absolut, Hair, CIGA Design, Native Union, and many more. He’s been a recipient of multiple awards, including the iF Design Award, Red Dot Design Award, Tokyo Good Design Award, German Design Award, and the Eurobike Awards, among others. Young’s work has even found itself a home in institutions like the Louvre, San Francisco Museum of Modern Art, and The Design Museum. Click here to visit Michael Young’s website and see his other works.

SquareONE’s latest renovation, located in the basement of a residential building in the center of Bucharest, was once home to some of  the most successful…

A perfect example of how generative design can be used to create products that serve their purpose incredibly well, the Voronoi Bike Helmet comes with…