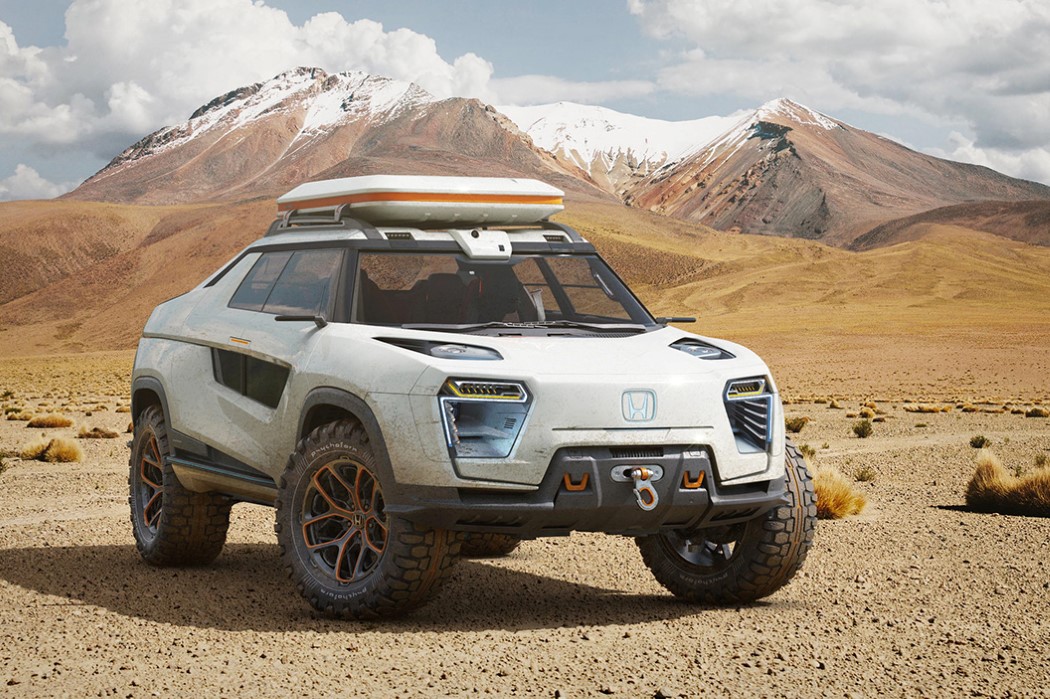 Purpose-built for handling tough tasks with ease, the Honda Ridgeline EV Concept was designed to project power. Its tough, sinewy construction puts other pickup trucks to shame, and makes a case for ‘maximalism’ in automotive design. Sure, minimally designed trucks (yeah, I’m looking at you, Tesla) look alright, but using minimalism to be different feels like a cop-out. The Ridgeline is a great example of how a truck can look different without compromising on an aggressive, muscular, dominating design language.

We featured the Honda Ridgeline EV Concept a week ago (you can click here to read the original piece which got over 90,000 pageviews) and today we look at the concept in its natural habitat – anywhere except the road! 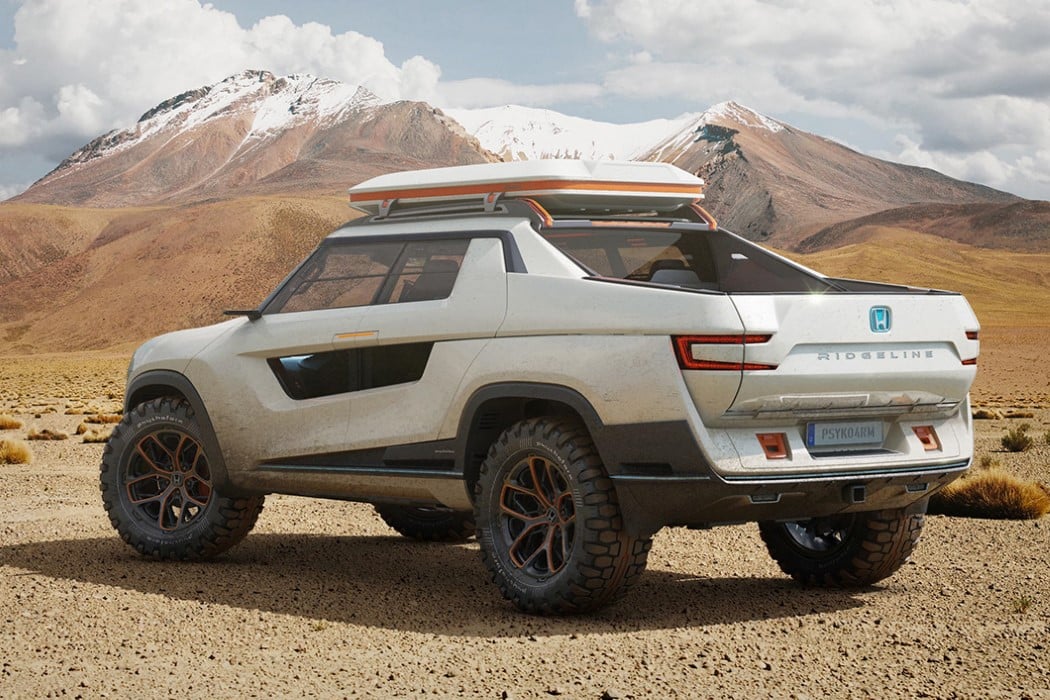 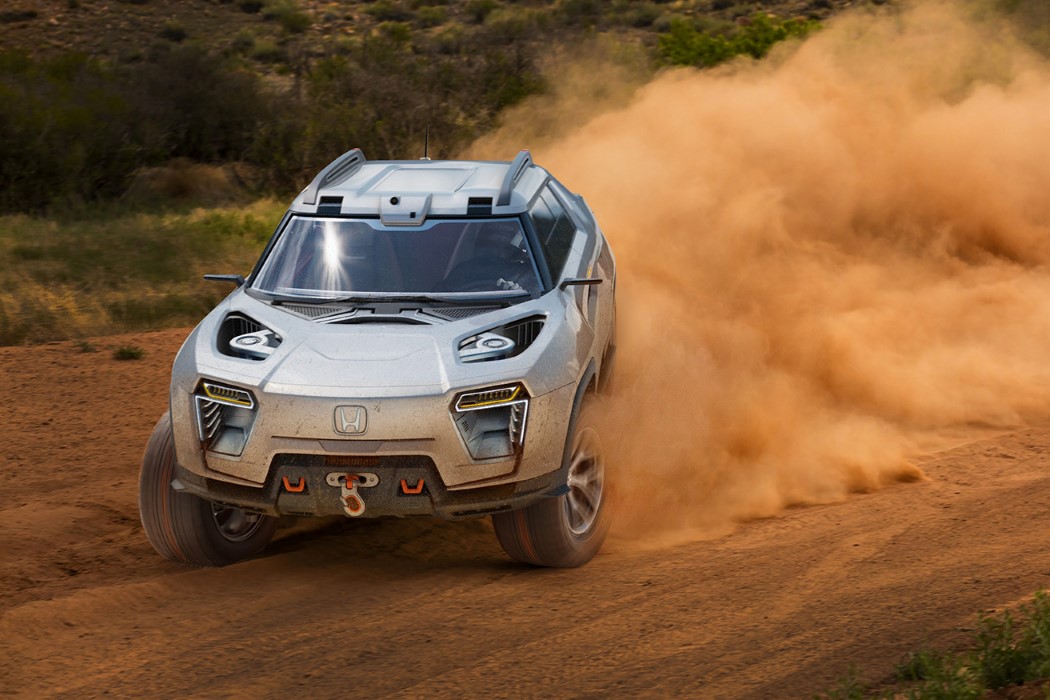 Against rocky terrain, it’s easy to draw parallels between the Ridgeline EV and the Warthog anti-infantry vehicle from the popular game Halo. They come from the same place of wanting to project power and assertion, and were made to operate seamlessly on any surface. The Ridgeline’s ground-clearance and large treads do wonders on rough land, and something about seeing a car leaving a massive dust cloud just gets the adrenaline rushing! 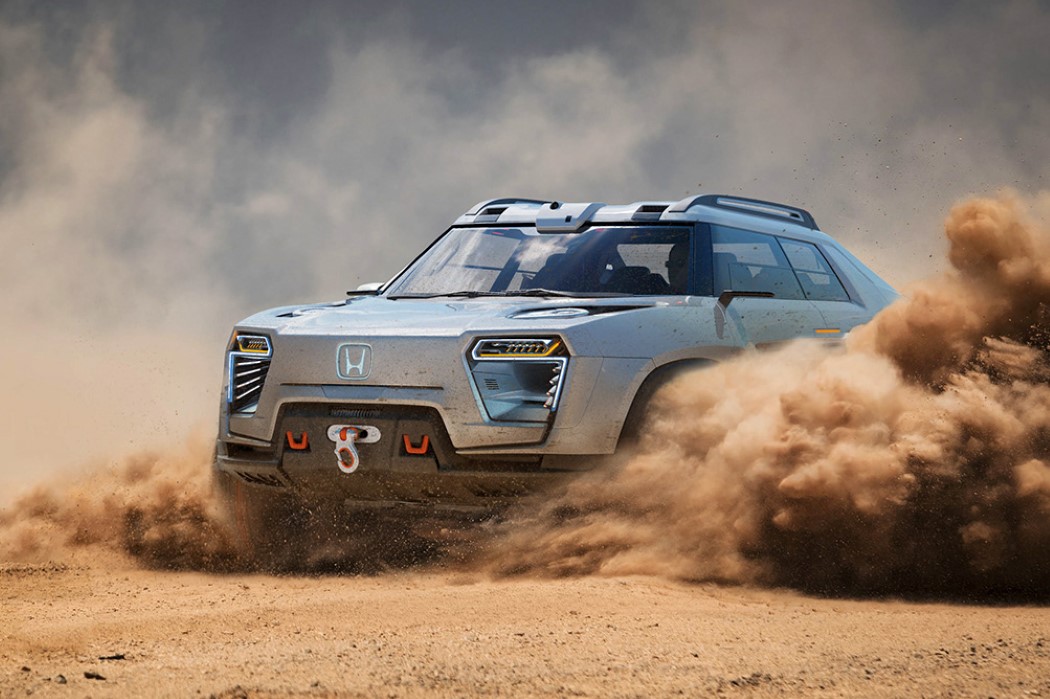 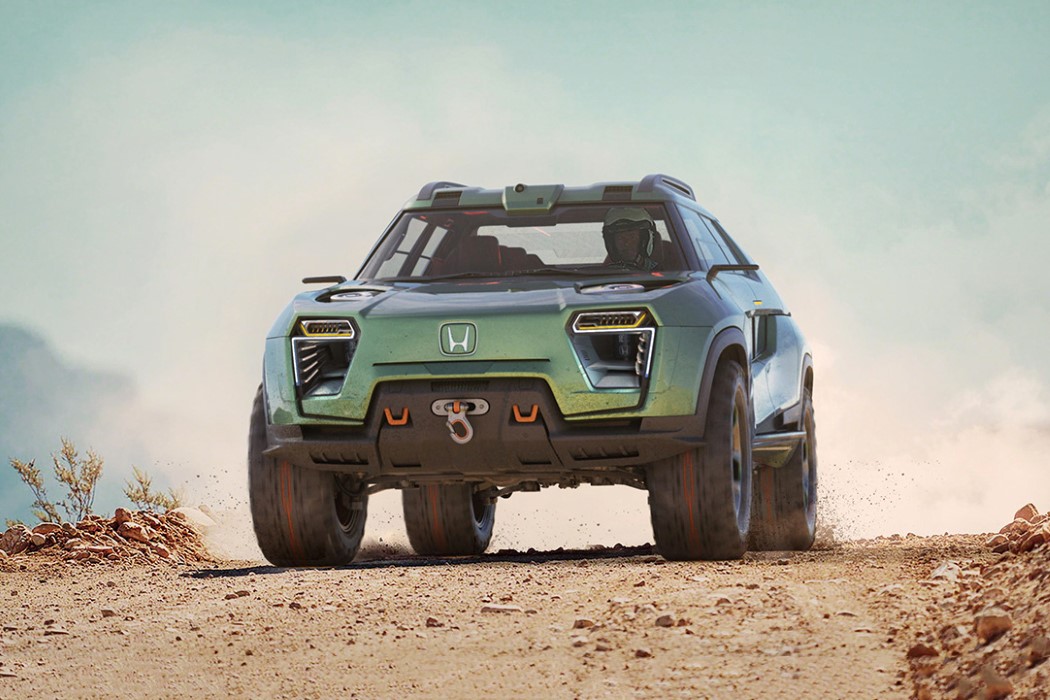 The Ridgeline is bulky to look at, but negative spaces in its design help cut its volume manifold, still making it look like a chiseled, mean machine. Two cutouts in the hood let you look at the top of the car’s shock absorbers, while the doors come with two sets of windows – one on the top as well as fixed windows near the legs, to help sunlight pore in. There’s a skylight built in too, and if at any point of time you need more open space, the back of the car opens up and allows the rear seats to flip 180° and face backward! 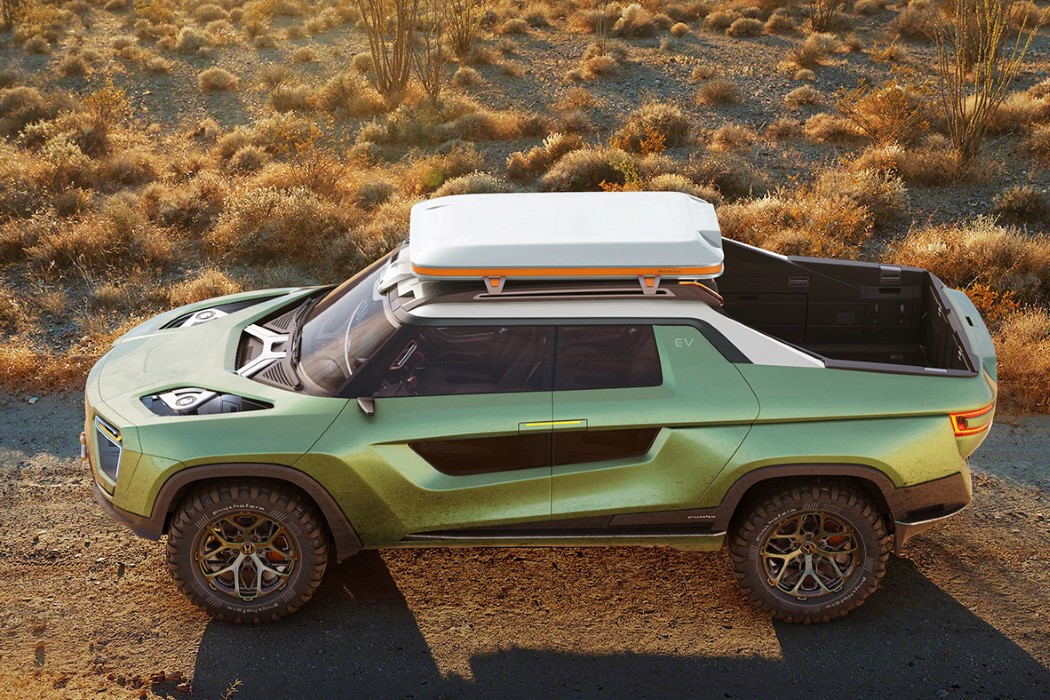 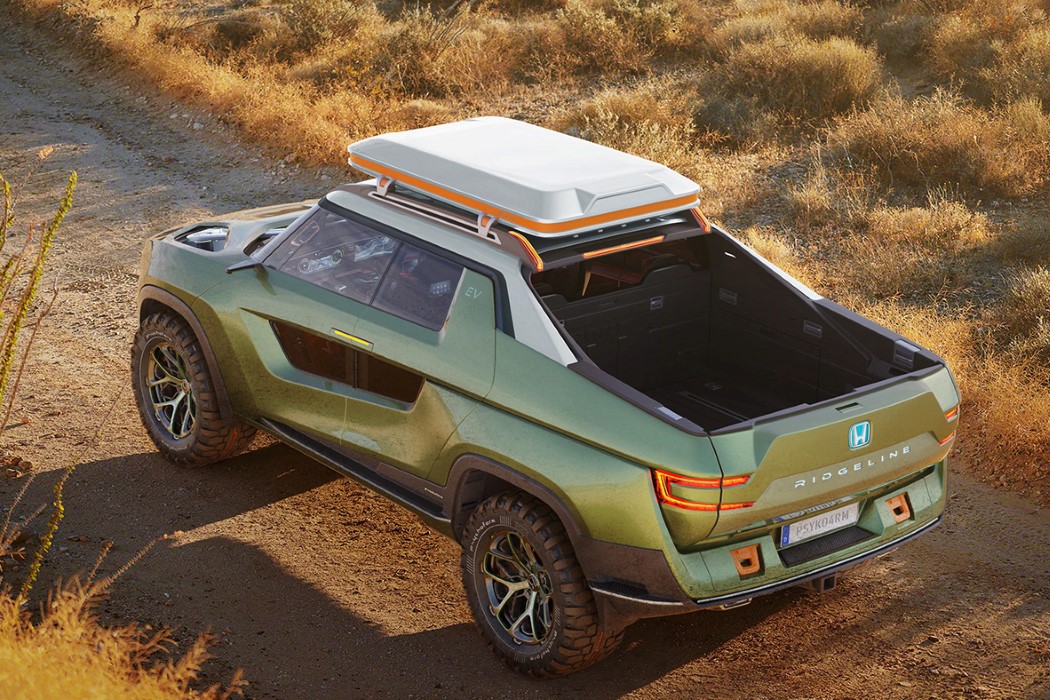 The car comes designed for the great outdoors. Its top allows you to add an aerodynamic roof box for extra storage (if the truck-bed isn’t enough), and the car’s front and back come dotted with lights to keep the road ahead visible, as well as allow you to be seen from a distance. 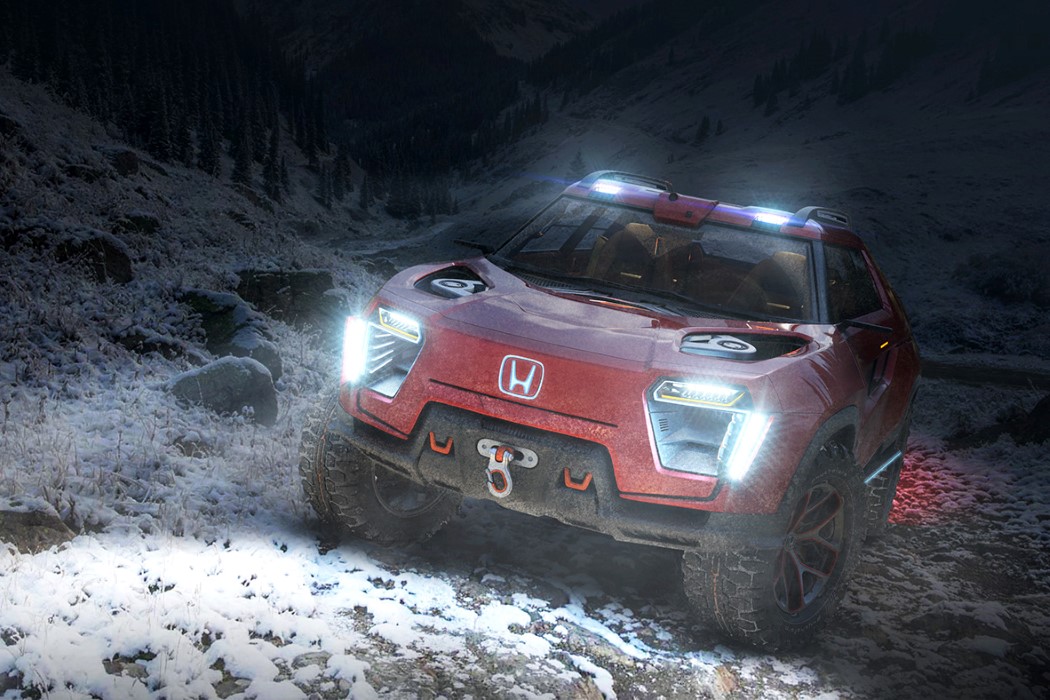 The Honda Ridgeline EV concept’s interiors literally put you in the lap of luxury too, no matter how deserted and inhabitable the immediate outdoors are. The pickup truck comes with immaculate leather surfacing on the seats as well as leather and wood trims on the doors and the dashboard. The dash also comes equipped with a pretty wide single-screen that covers your entire field of view from left to right. Side cameras feed video footage right into this dashboard and a rear-view camera sends its feed to a rear-view display up top. Don’t worry if you’re not in the driver’s seat or if you’re sitting shotgun. The rear seats have their own entertainment systems too, with interactive displays integrated into the backside of the front seats. The skylight in the center is accompanied by ceiling lights on either side, so you’ve got nothing to worry about when you’re driving in pitch darkness. Moreover, the seats recline fully and the back opens up into a really comfy bed if you want to set up camp anywhere. However, if you’ve got yourself a quad-bike, you could easily mount it on the back too! 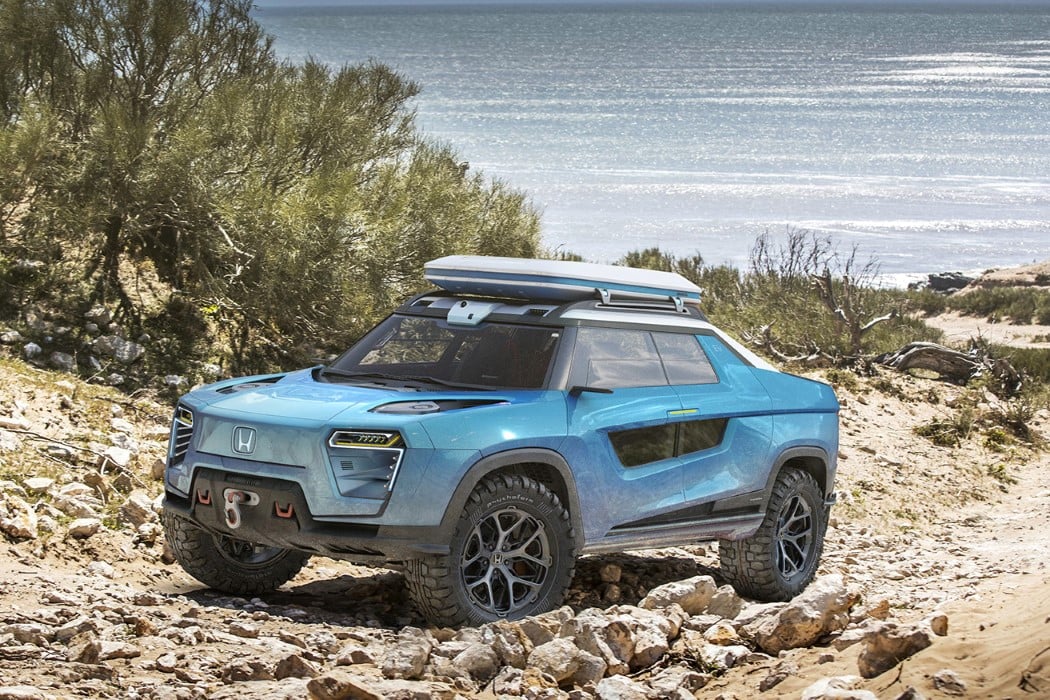 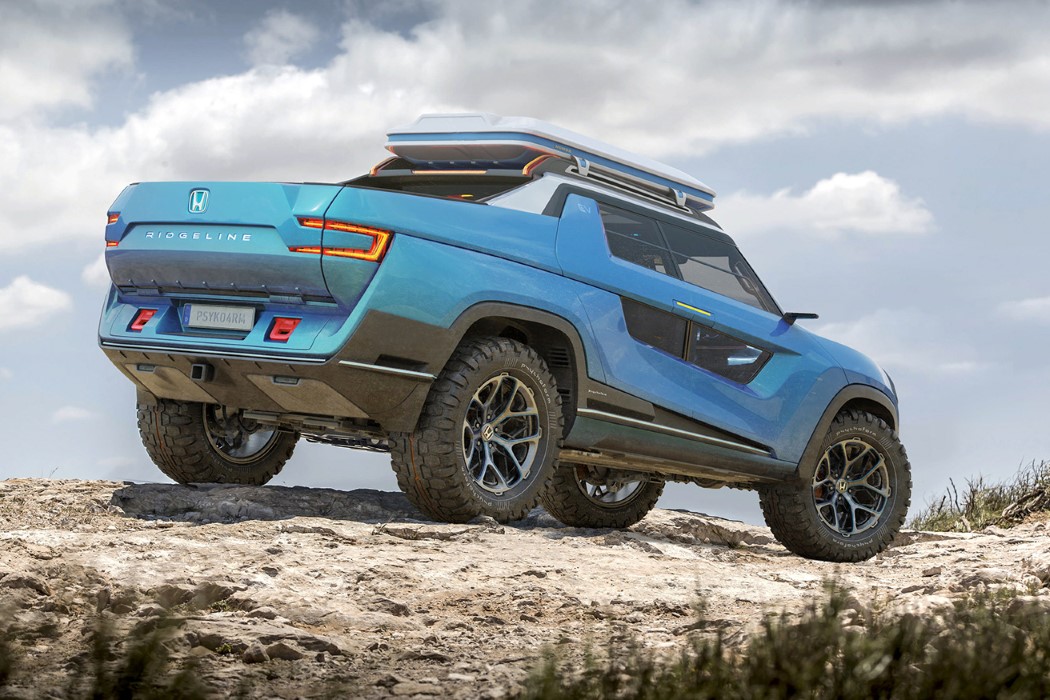 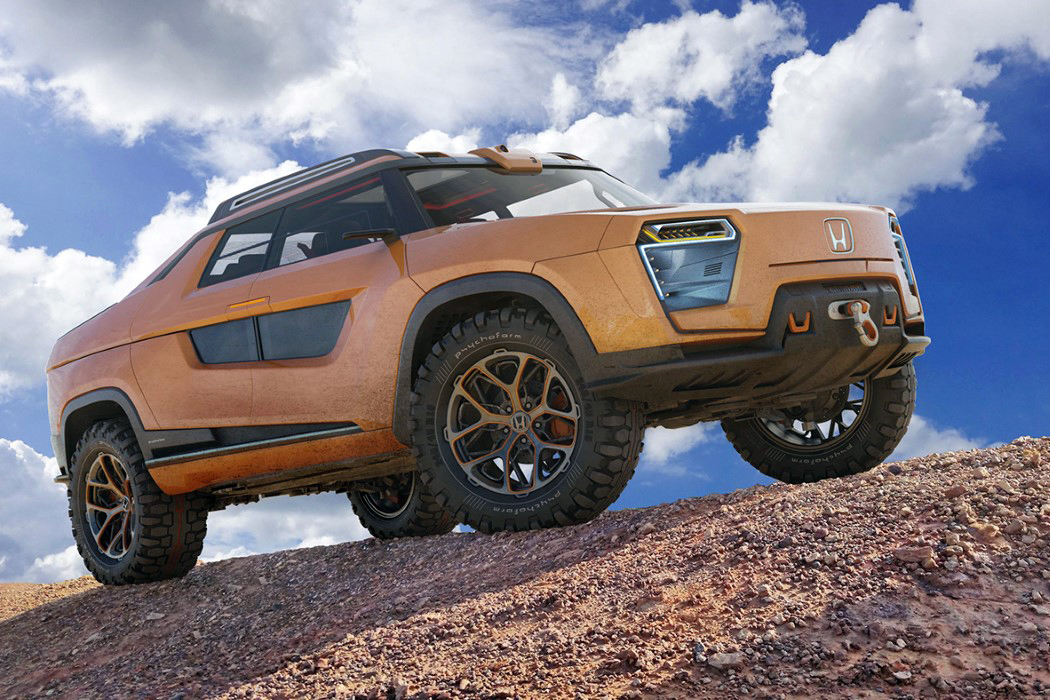 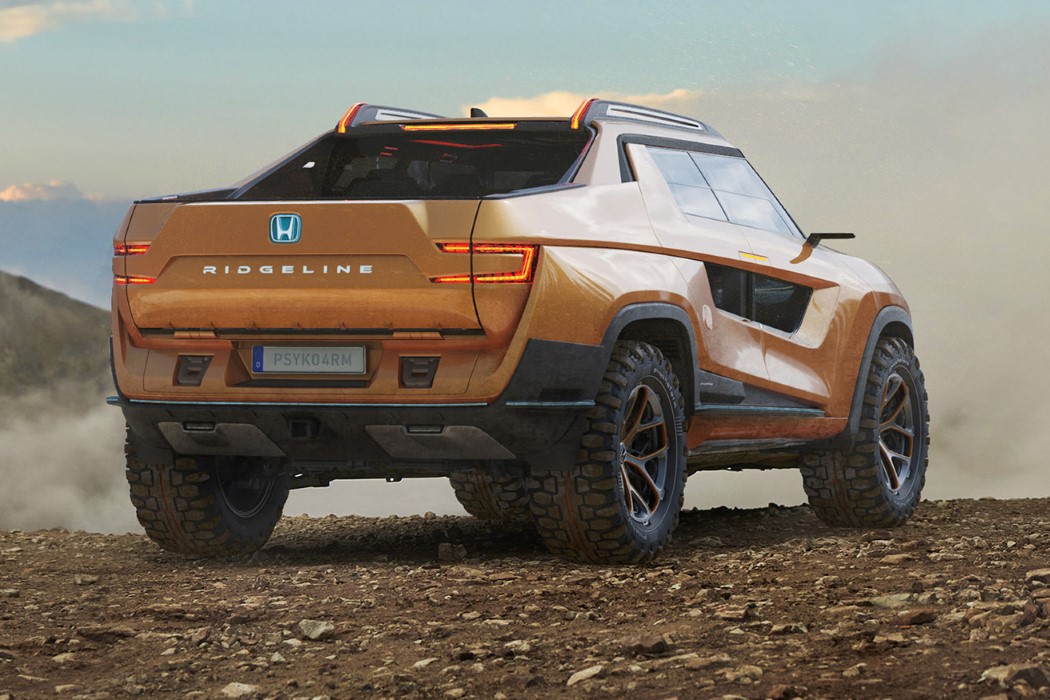 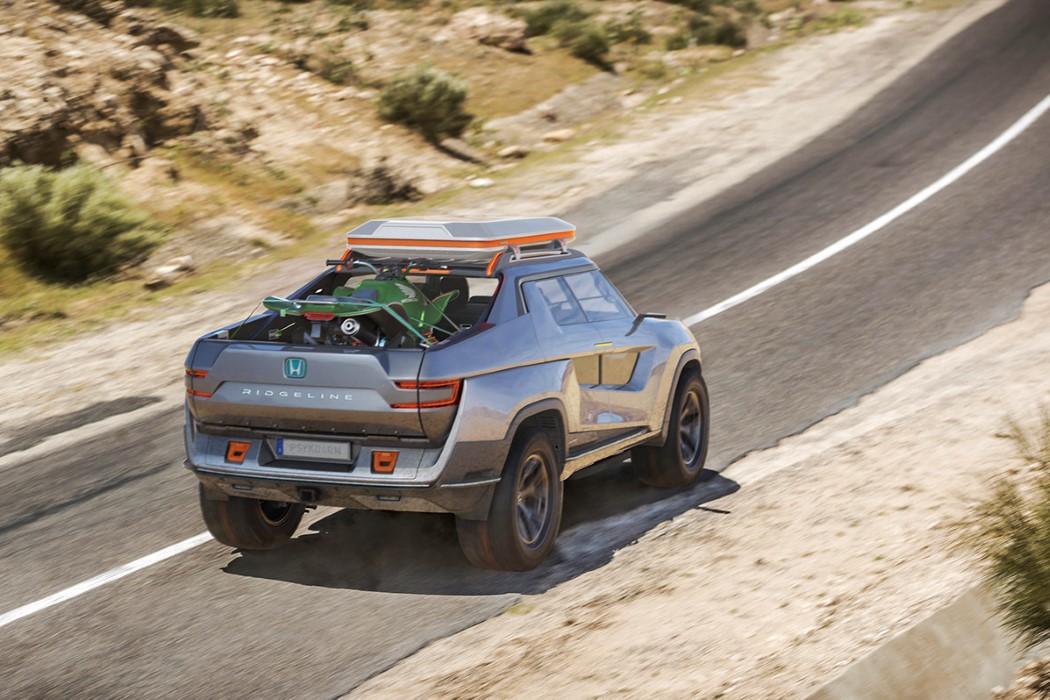 This is an independently-made conceptual design and the Honda logo is used for representational purposes only.

Text in this article is irrelevant because I myself can’t get enough of these images. Rolls Royce isn’t known for presenting outlandishly futuristic concept cars,…

Apparently plastic bags are a resourceful means to collect morning dew and many mountaineers use it to collect water. Needless to say, not all climbers…

Every year starting around March, designers collectively participate in a 36-day endeavor called the ’36 Days of Type’, where each day, designers express their creativity…

Snow chains for your feet

Designed to be snapped on to your trekking shoes when you need every bit of traction you can get, the Yaktrax Summit looks bold, rugged,…