One of the biggest takeaways from this pandemic is that a smaller, more consolidated workplace is a much more efficient one. The minute you have too many moving parts in an office, it becomes a problem trying to remotely coordinate between departments, people, and time-zones. A year ago I predicted that the pandemic would boost in-house prototyping – and the Satori VL2800 hopes to do just that. Designed to be an industrial-grade 3D printer that can sit well in homes, studios, workshops, and even classes, the Satori VL2800 is an MSLA (masked stereolithography) printer that uses a resin bath to make highly accurate 3D models at a rapid pace. With a print-bed that measures 11″ x 6″ and that can print up to 12″ inches high, the Satori VL2800 is capable of printing large parts and models in a single print cycle (without needing you to split the job into multiple parts and then join them together), and thanks to the presence of a 6K curing screen, the VL2800 can print in stunningly accurate detail.

The printer’s proportions make it perfect for most indoor setups. Roughly the size of a mini-fridge, the VL2800 comes with an enclosed printing area and can be placed practically anywhere, turning your home or studio into a state-of-the-art production and prototyping facility. The VL2800’s large print volume allows you to print bigger objects (like an entire bike helmet for instance) in a single print-cycle, making them easier to test for stress, ergonomics, etc. For more intricate prints, the VL2800 comes with a 6K screen that boasts of pixels as small as 51μm (51000 nanometers) in size, which translates to much more detailed and smoother prints that don’t require post-processing, sanding, acetone-treatment, etc. In fact, Satori’s even worked with multiple schools, designers, and agencies to develop wide ranges of prototypes from actual functional prosthetics to jewelry and intricately detailed statues and figurines too.

A London-based startup, Satori partnered with Elegoo to help manufacture the VL2800 at a large scale. The Z-motor that controls the print depth runs on a Hiwin steel rail with a closed-loop drive for rock-solid printing. The printer’s bed comes factory-leveled and the motors calibrate themselves, resulting in remarkable prints every time. Each Satori VL2800 ships with its own kit to help you operate and maintain the printer (spatula for dislodging prints, clipping pliers for cutting out support structures, 16Gb Sandisk SD card, etc) and even comes with 1kg of premium resin to get you started. At a super-early bird price of £2015 ($3047), the Satori VL2800 isn’t cheap, but is much more reasonably priced than most MSLA printers that can often set you back by $10,000 or more. Sure, it doesn’t match up to your $300 filament-based printer, but then again, it’s miles ahead in terms of print-quality, print-speed, and print-size, making it perfect for small-scale companies, studios, design entrepreneurs, schools, and fab-labs. 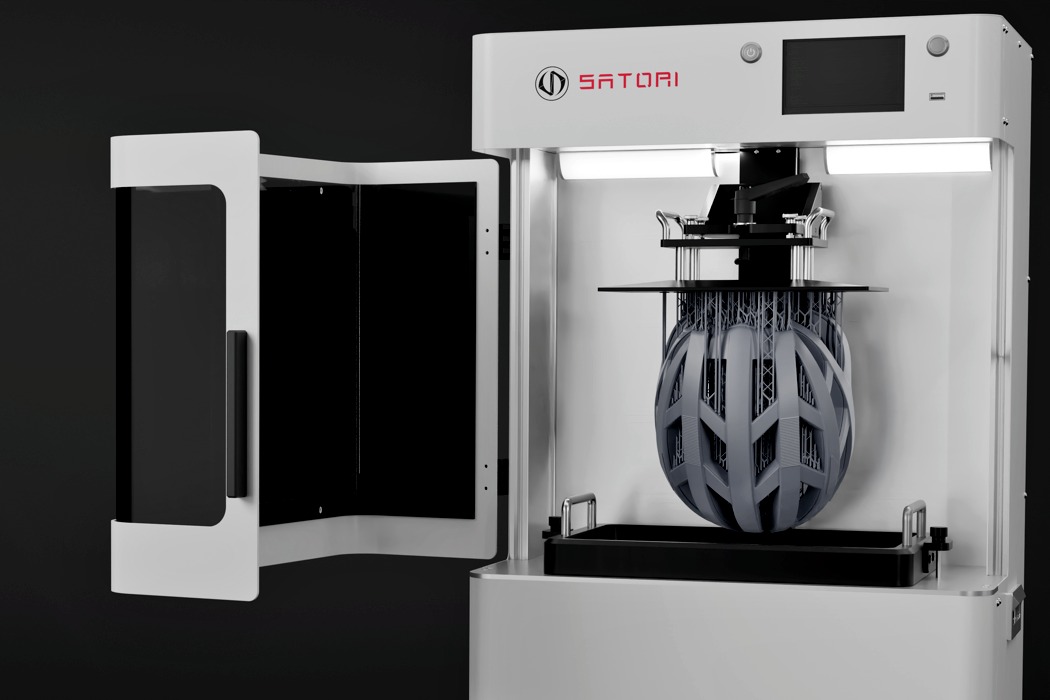 The Satori VL2800 is an industrial grade, large-scale resin 3D printer designed from the ground up for high performance and reliability, with a focus on scale, precision, and speed. 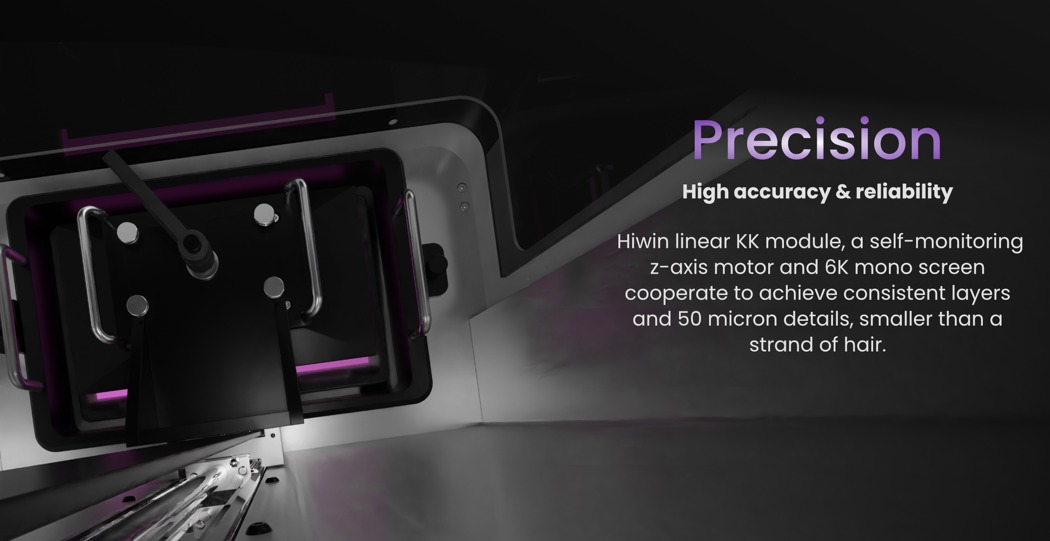 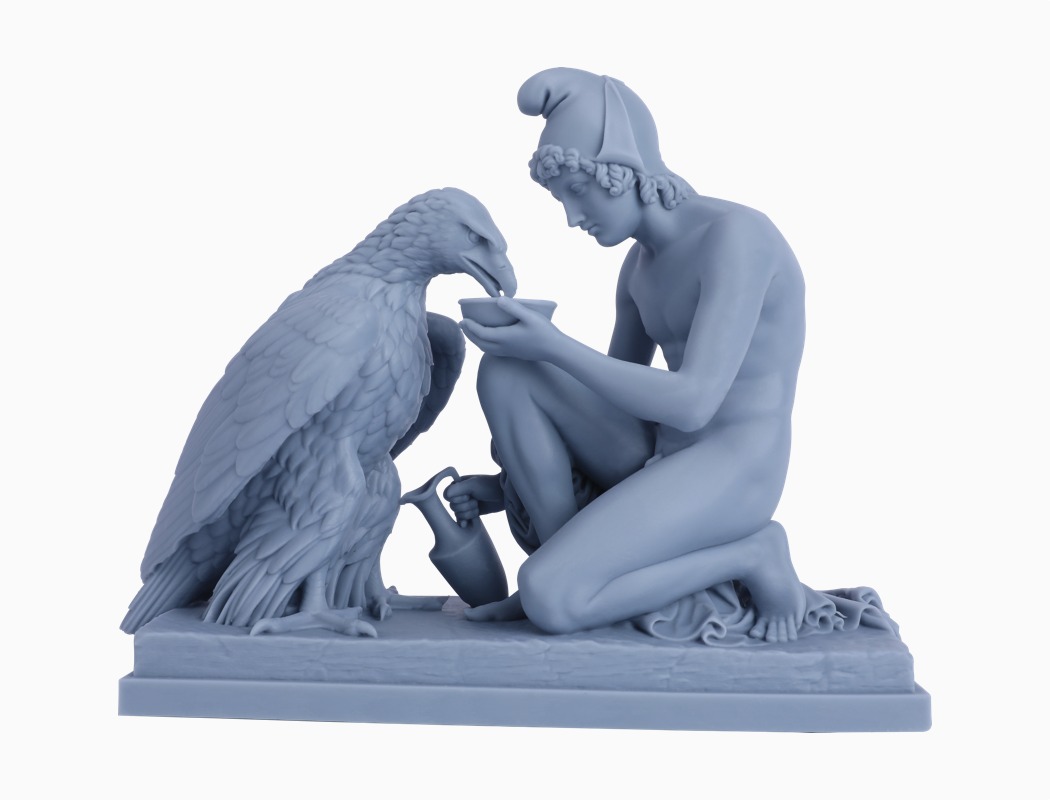 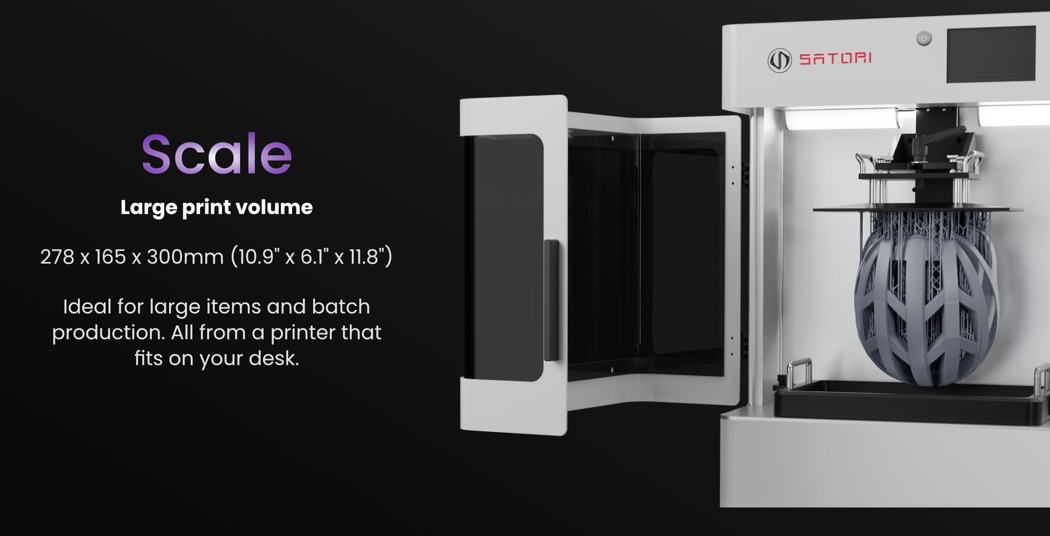 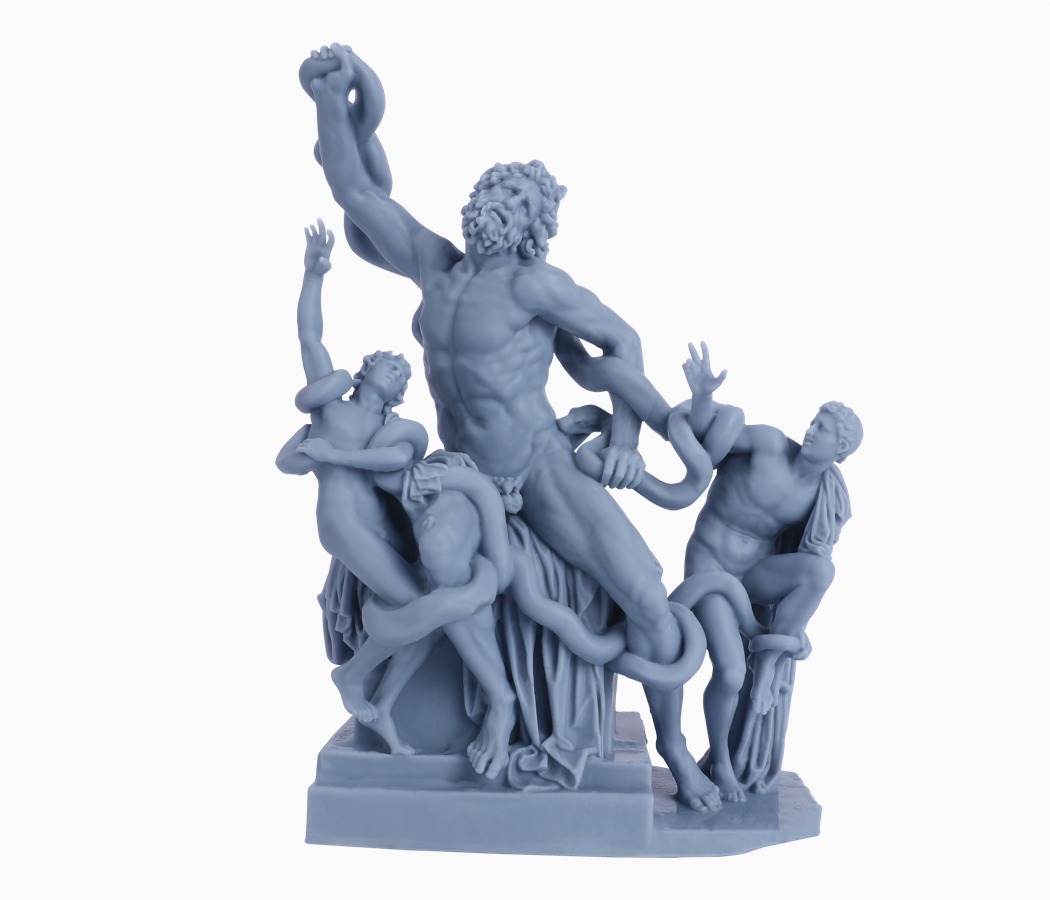 Big projects printed in one go, no need to glue together. 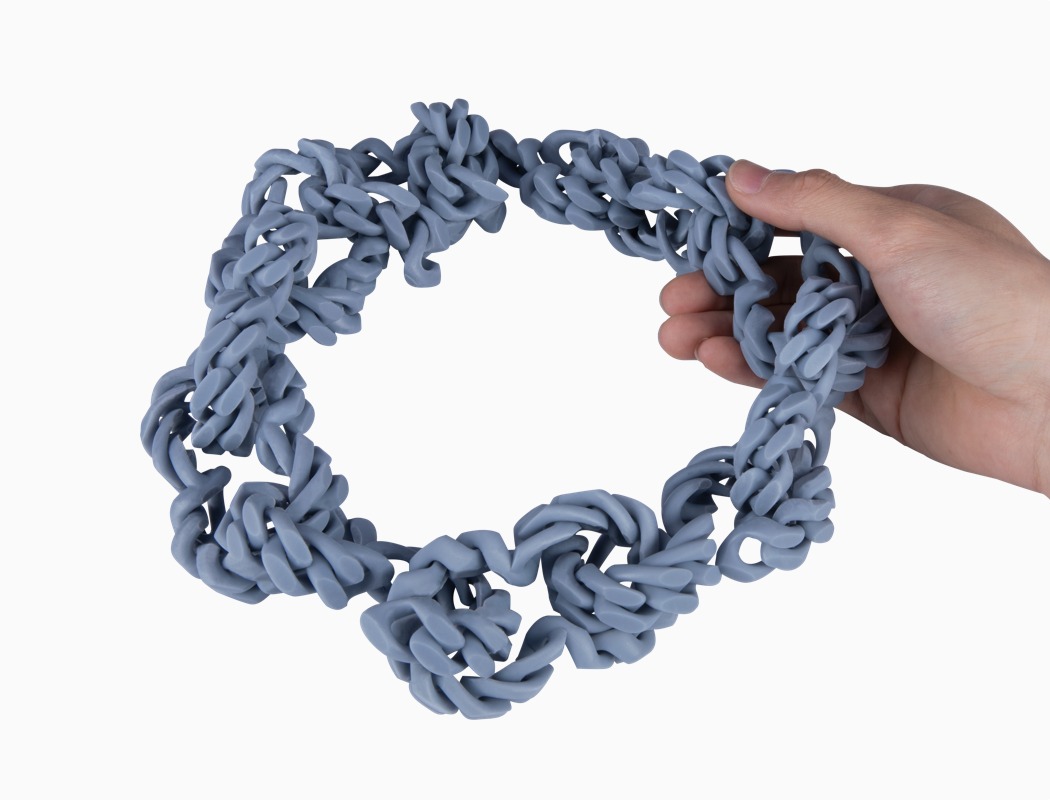 Satori VL2800 is supported by Elegoo’s reliable manufacturing capacity, which has successfully manufactured and shipped over 100,000 units of 3D printers worldwide in 2020. To ensure a streamlined approach, Satori has engineers on-site to supervise quality control. 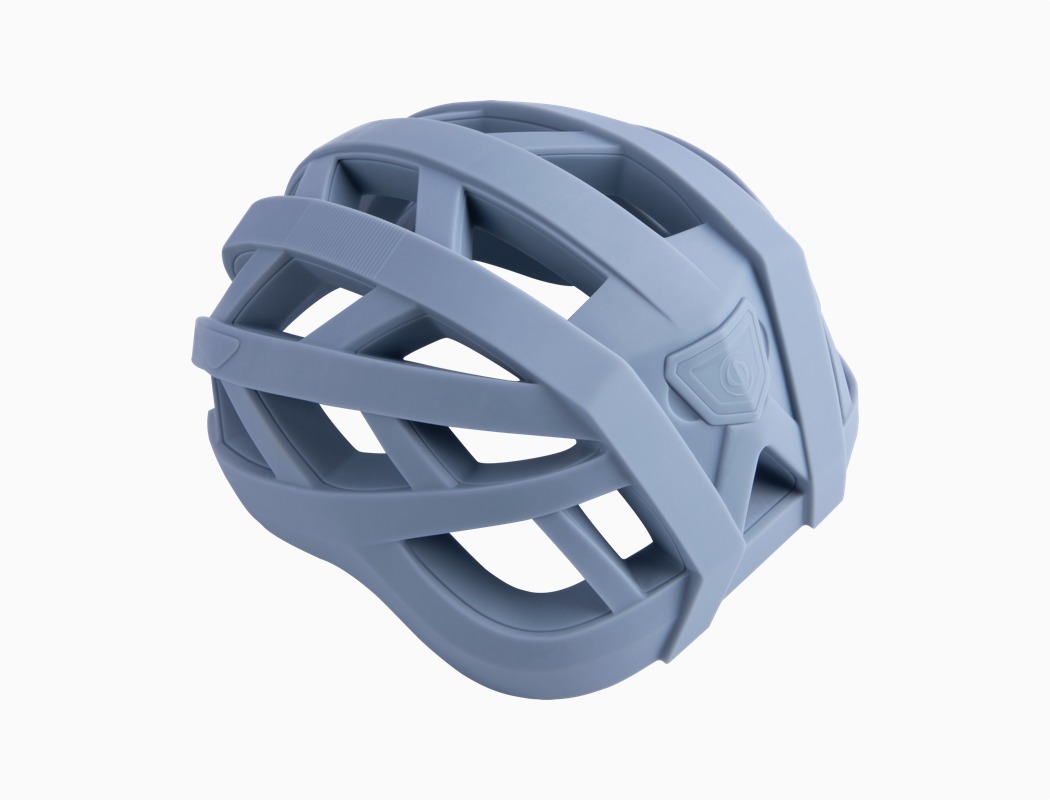 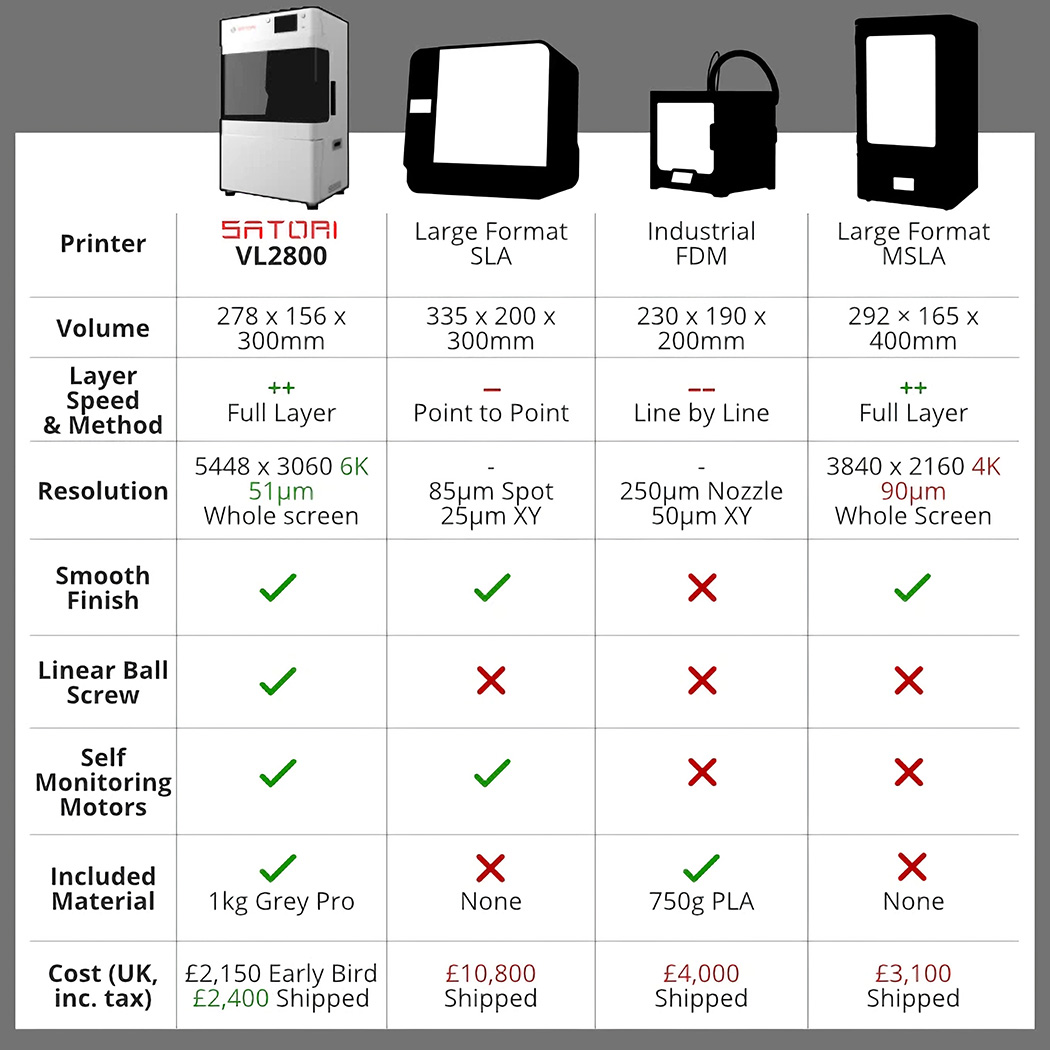 6K Monochrome Panel – Most of the current MSLA 3D printers in the market use a 4K panel. The problem is when the machine’s volume increases, you’d reduce the resolution because those same pixels would be spread over a larger surface area. By using the most advanced 6K monochrome panel, with a 5448 x 3060 array of pixels (51-micron resolution, smaller than a strand of hair), you can expand the machine’s build volume to a massive 278 x 165 x 300 mm without compromising the resolution.

High Precision with Industrial-grade Z-Axis – Satori is reaching into the world of precision robotics to source our z-axis assembly. Using a Hiwin ‘KK module’ with a ball screw means we are able to guarantee consistent layer heights, and print surface quality for tens of thousands of hours of printing.

Smooth Finish with Self-monitoring Z-Axis Motor – Using a closed-loop, self-monitoring z-axis motor means that the printer knows it has moved the correct distance for every layer. If you’ve ever seen layer-by-layer patterns in prints from other machines, it’s often caused by the motor skipping steps and altering the thickness of that layer.

Re-engineered UV Lighting – As printing resolutions get higher, the consistency and uniformity of light become as important as the screen itself. At Satori, we are pushing the lighting solution beyond hobby-level printers. The Satori VL2800 stands apart from other MLSA machines in terms of light parallelism and evenness across the screen.

Factory Levelled – Unlike hobby-level 3D printers, which require users to level the print platform manually before use and adjust from time to time due to instability. Satori VL2800’s print platform is levelled in the factory ready for print right away and no adjustment is needed throughout the usage. As an industrial-grade 3D printer, Satori VL2800 focuses on streamlining the user experience, helping you focus on your creativity and get work done.

Built for Servicing – Satori VL2800 3D printer cures a whole layer at a time, so the time to print one item is the same as to print multiple items on the build platform. With a bigger build volume, we can fit much more items, thus reducing per item production time. For example, batch producing 50 buckles take 3.5 hours, resulting in a per buckle production time of 4.5 minutes. 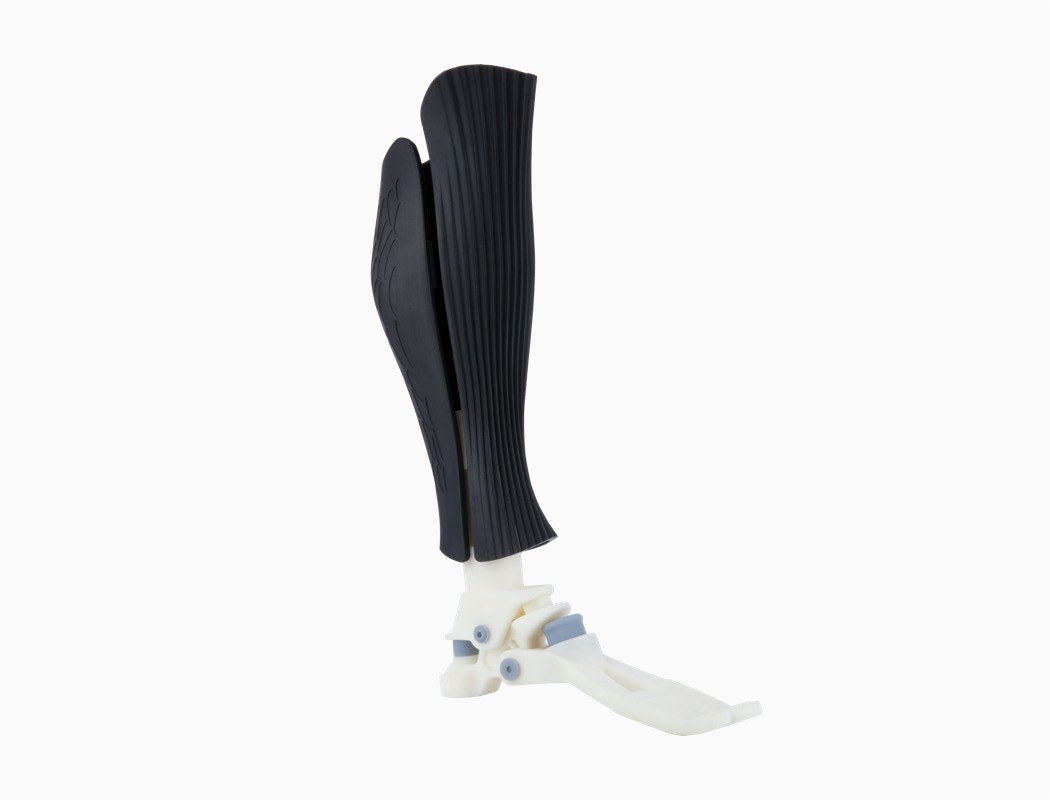 Prosthetic Leg – 3D printed prostheses are revolutionizing the medical field and unlocking it to those who could not afford it. 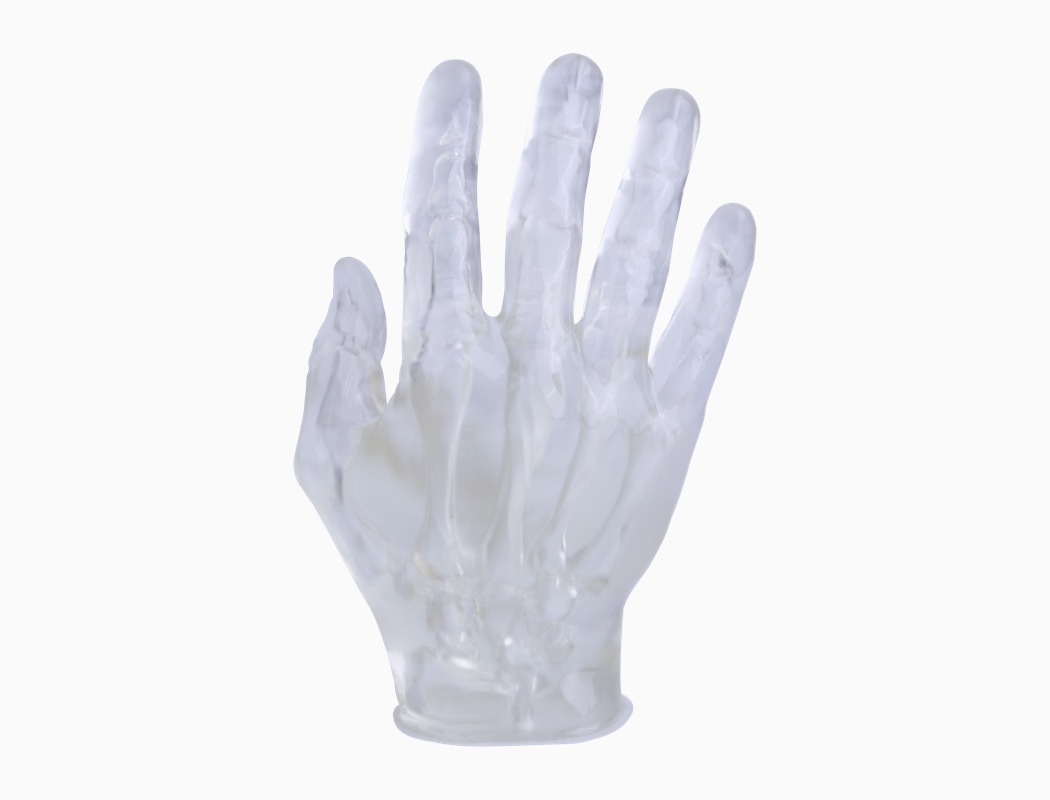 Hands & Bones – The hand was scanned from a real human hand of their engineer’s friend, 3D scanned using over 800 photos. It was printed by a Satori 3D printer with intricate inner bone structures and hollow, which can be injected with dyes to highlight the presentation. Satori’s hyper-detailed 3D printing at a realistic scale allows you to create everyday objects with sentimental value.

The majority of the world population comes from China and I suppose every country in the world has a China Town. Therefore I vote for…

Virtual reality… how could something so cool look so uncool?! Until now, that is. Introducing, Givenchy VR, also known as Ombré. Taking on VR would…