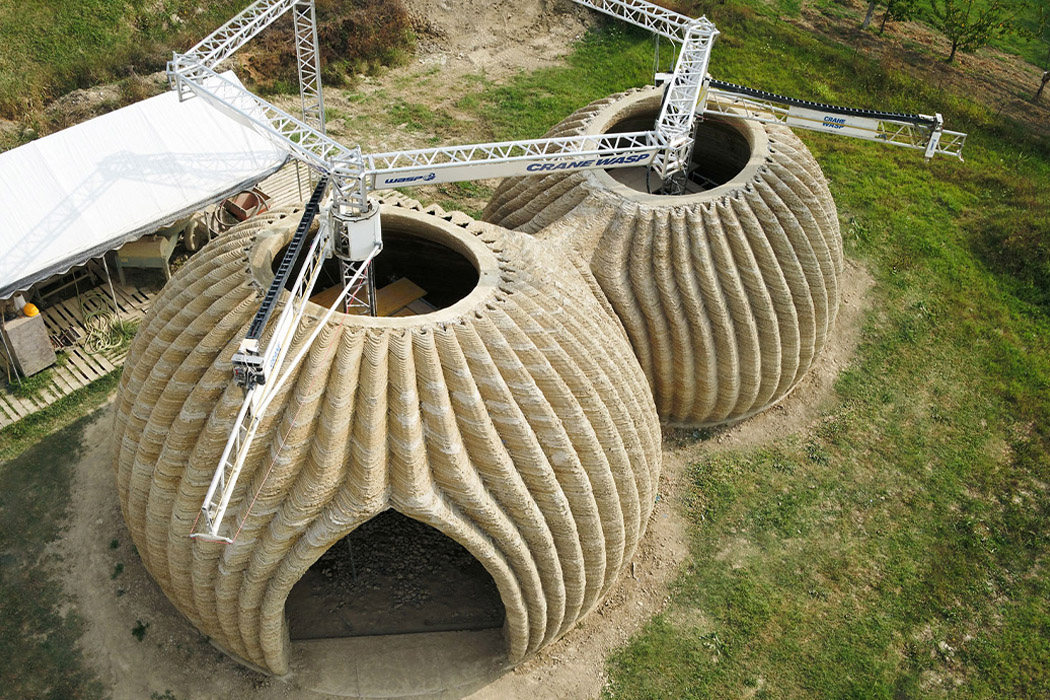 Nowadays almost everything is being 3D printed, so why should architecture be an exception? Many architectural firms are adopting 3D printing as their preferred technique to build structures. It’s a simple, efficient, and innovative technique that lowers the risks of errors, and also manages to save on time! 3D printing eradicates a lot of tedious steps during the construction process and simplifies it. It is being used to build homes, habitats on Mars, and even coral reef islands! The potential and possibilities of 3D printing in architecture are endless and mindblowing. We’ve curated a collection of 3D-printed structures that left us mesmerized – from a sustainable global habitat to a house fit for Mars, we’ve got a little something for all types of arch lovers! 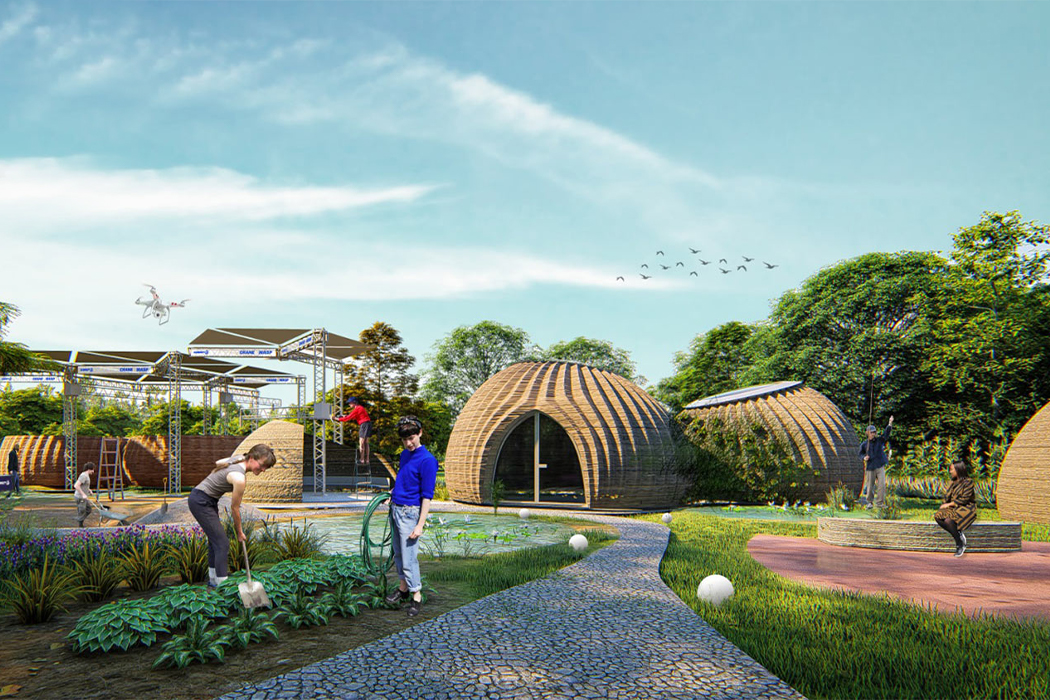 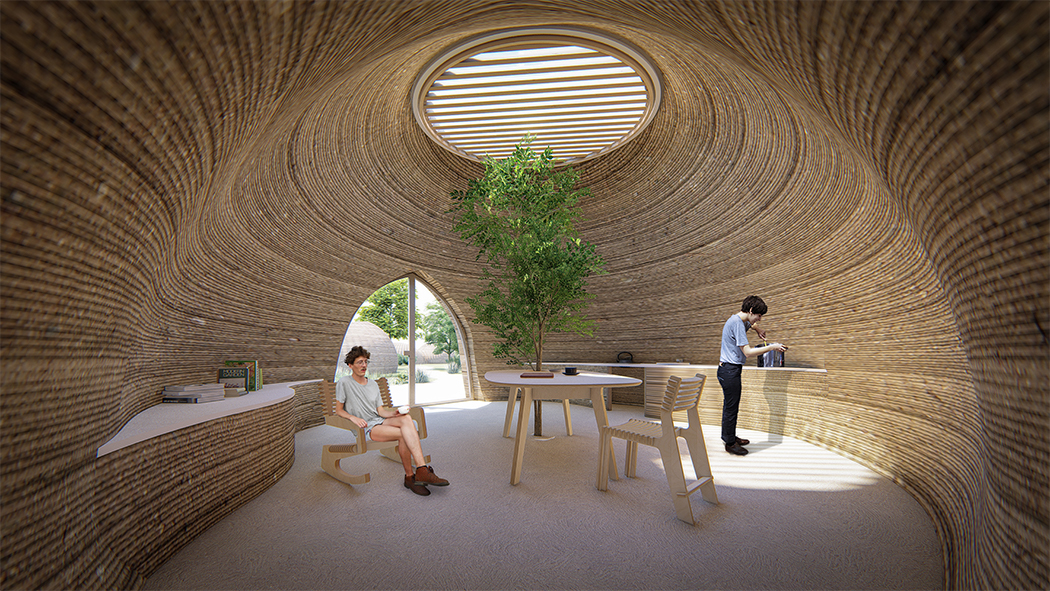 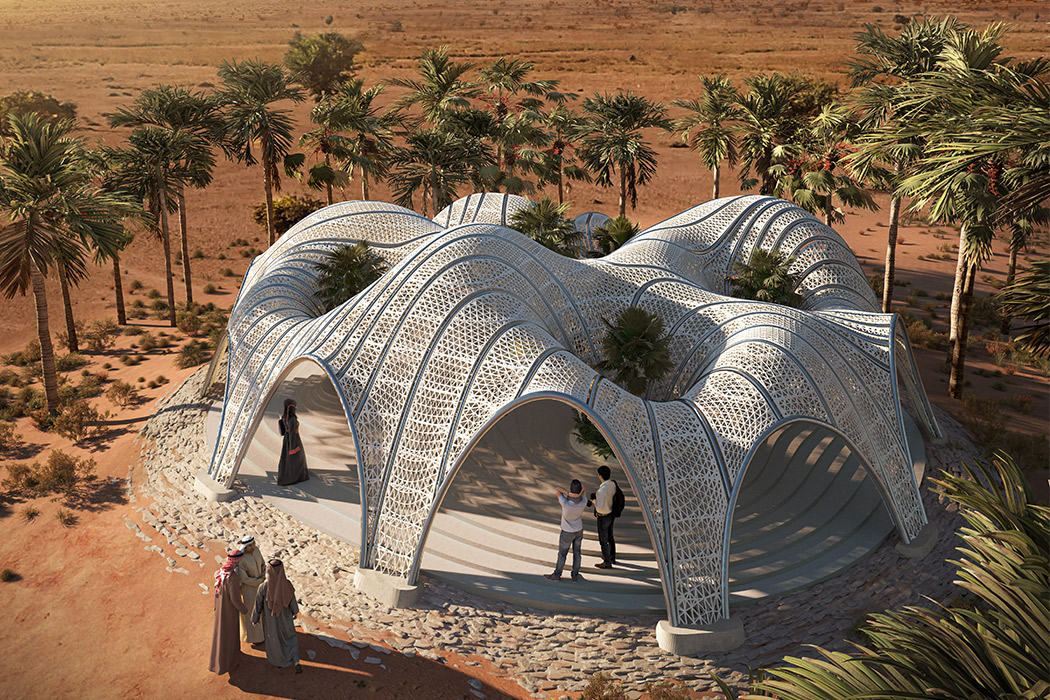 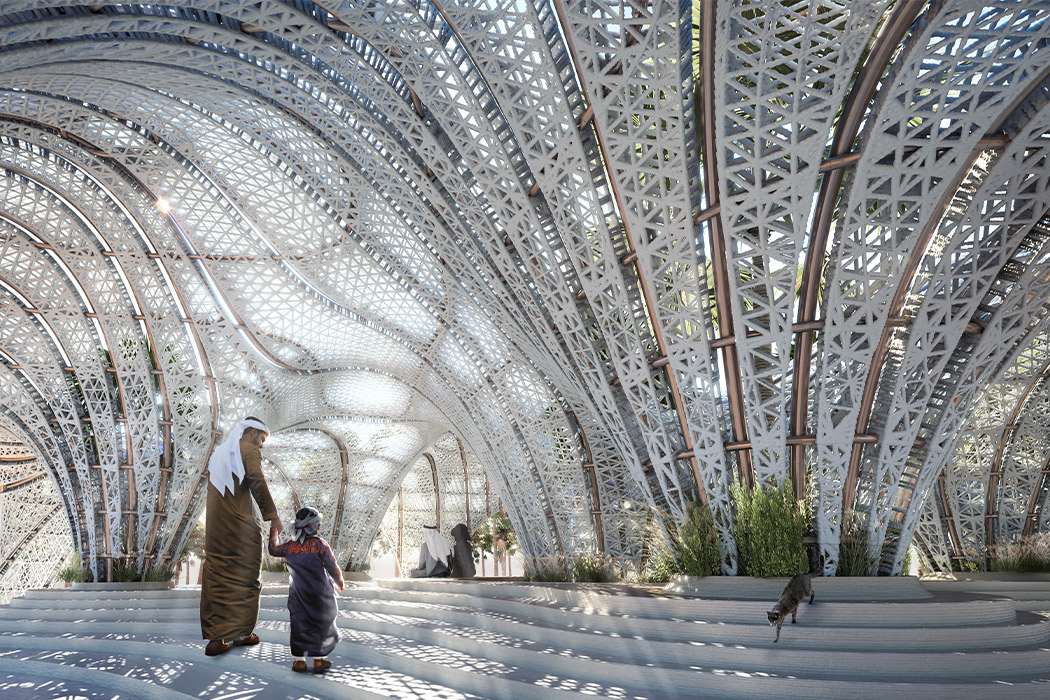 What would you print with free access to a 3D printer and resources? My imagination is running wild between custom accessories and a tiny house! Architecture firm, MEAN* (Middle East Architecture Network), did just that and designed a complete 3D printed pavilion to welcome visitors from all over the world into the mystical desert of Wadi Rum in Jordan. Fun fact about Wadi Rum – it looks so much like the Martian landscape that it has served as a stage for multiple space movies, even for ‘Rogue One: A Star Wars Story’, a cult classic! The Desert Pavilion was created to be a communal oasis of heritage and micro-ecology. When you look at the renders, the structure is a blend of local Bedouin architecture with space-age technology. The design team has envisioned an innovative use of 3D printed panels by deploying them onto a CNC bent steel pipe system. To simulate a holistic tent-like structure, the team used a hybrid of 3D printed polymer shells on 3D printed concrete topography with the ‘Mesh Relaxation’ parametric strategy. 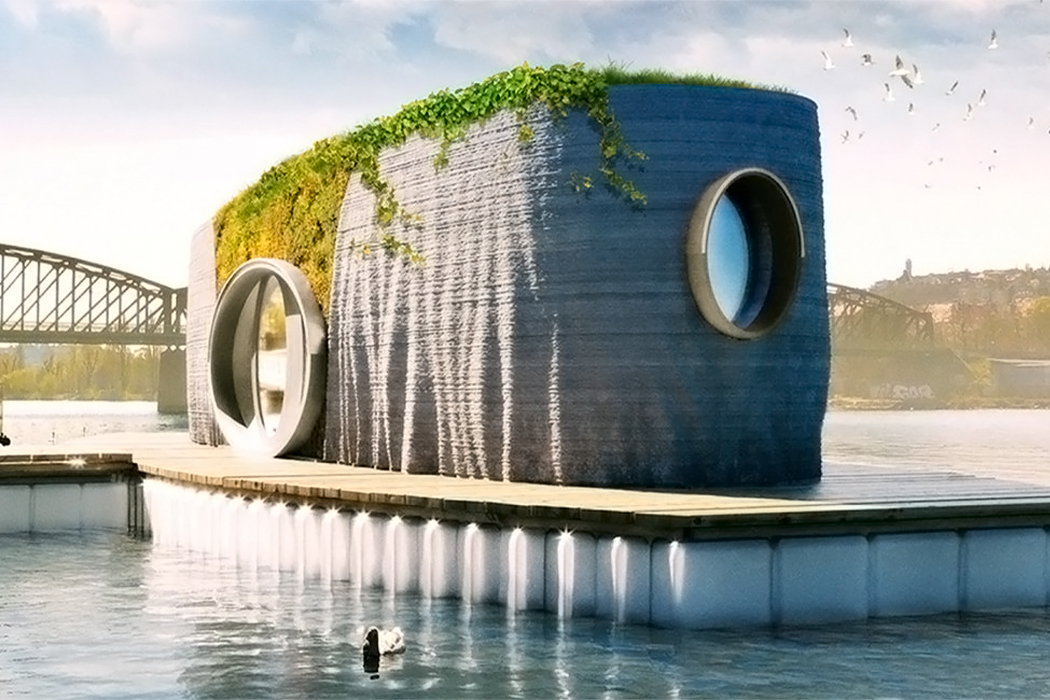 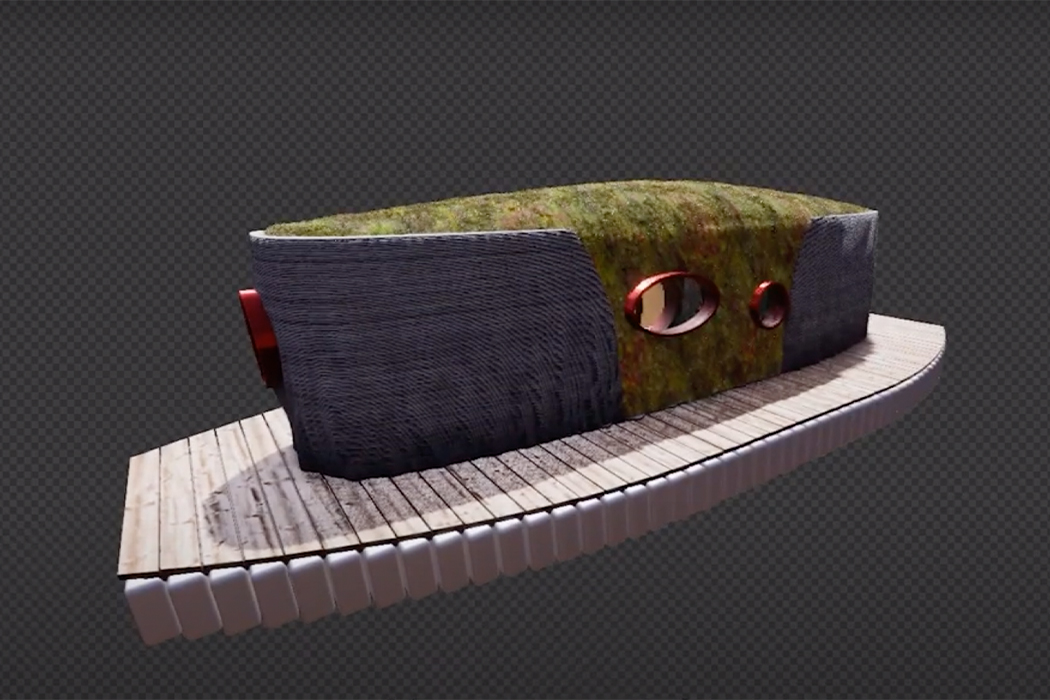 Prvok is the name of this project and it will be the first 3D printed house in the Czech Republic built by Michal Trpak, a sculptor, and Stavebni Sporitelna Ceske Sporitelny who is a notable member of the Erste building society. The house is designed to float and only takes 48 hours to build! Not only is that seven times faster than traditional houses, but it also reduces construction costs by 50%. No bricks, cement, and concrete (responsible for 8% of CO2 emissions alone!) are used which means it reduces carbon emissions by 20% – imagines how much CO2 could be reduced if this was used to build a colony. A robotic arm called Scoolpt designed by Jiri Vele, an architect, and programmer will be used in 3D printing and can print as fast as 15 cm per second. 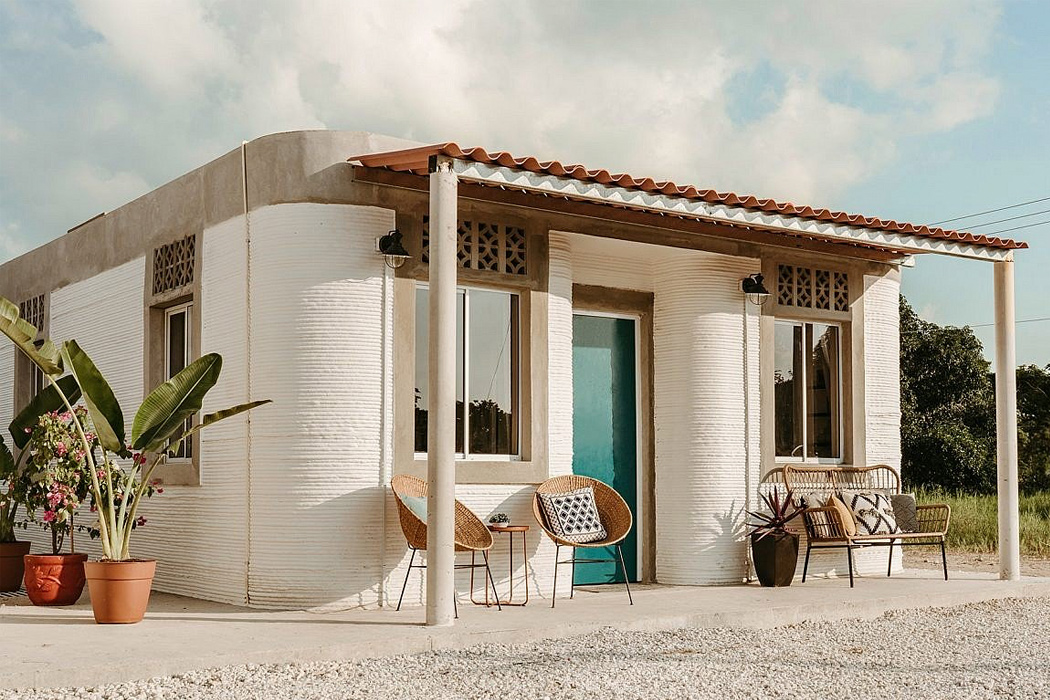 Nonprofit New Story, tech company ICON, and design studio fuseproject collaborated to bring an end to global homelessness…or to at least kickstart the beginning of its end. How did they do so? They recently unveiled the world’s first 3D-printed neighborhood in Tabasco, Southern Mexico. Yves Béhar and his studio fuseproject designed the homes by directly collaborating and working with the families they were being built for. “As we spoke to the community members, we realized that a single house design doesn’t respond to the needs and expectations,” said Béhar. “This led us to design a system that allows for different programs, climate factors, and growth for families and spaces.” The community members were included in the selection of the land and throughout the planning process, to ensure their housing requirements were met. The end result will be a lively 3D-printed neighborhood of fifty 500-square-foot, single-story houses for the poorest communities who are always the last to benefit from innovation and technology.

Bjarke Ingle’s BIG and 3D-printed building company ICON are working on Project Olympus – a mission to develop robotic construction for the moon. Bjarke Ingles is the Elon Musk of the architectural world, he loves to explore the impossible and has a penchant for designs that can help save mankind right from his environmentally friendly buildings to Project Olympus. Project Olympus is about finding a way to create a 3D-printed infrastructure for living on the moon using materials found on its surface. Why do we need a habitat on the moon? So that we can launch sustained lunar exploration missions where the astronauts will be able to stay comfortably and carry out their research for extended time periods. The project has also enlisted SEArch+ (Space Exploration Architecture) after it received a Small Business Innovation Research (SBIR) government contract boosted with funding from NASA. 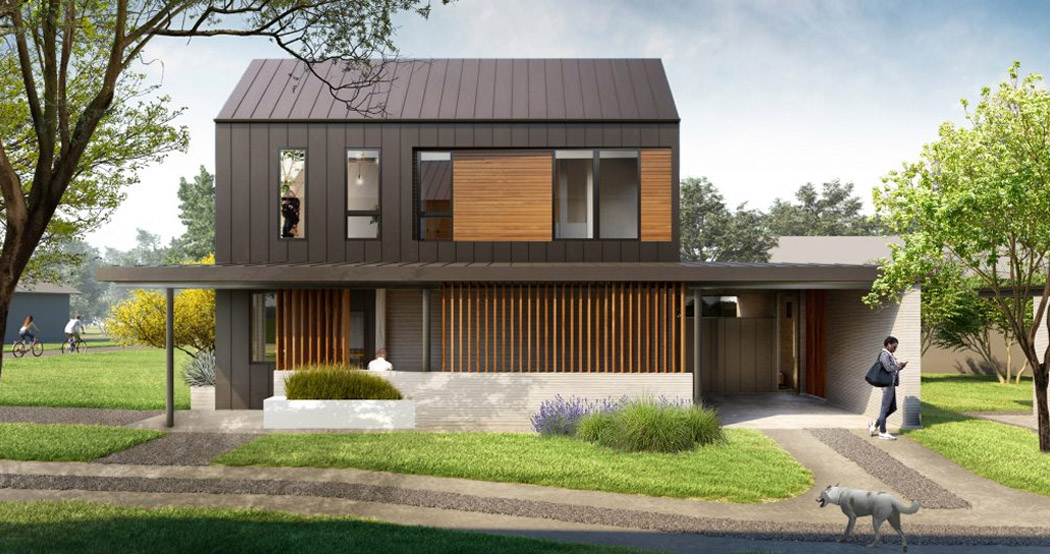 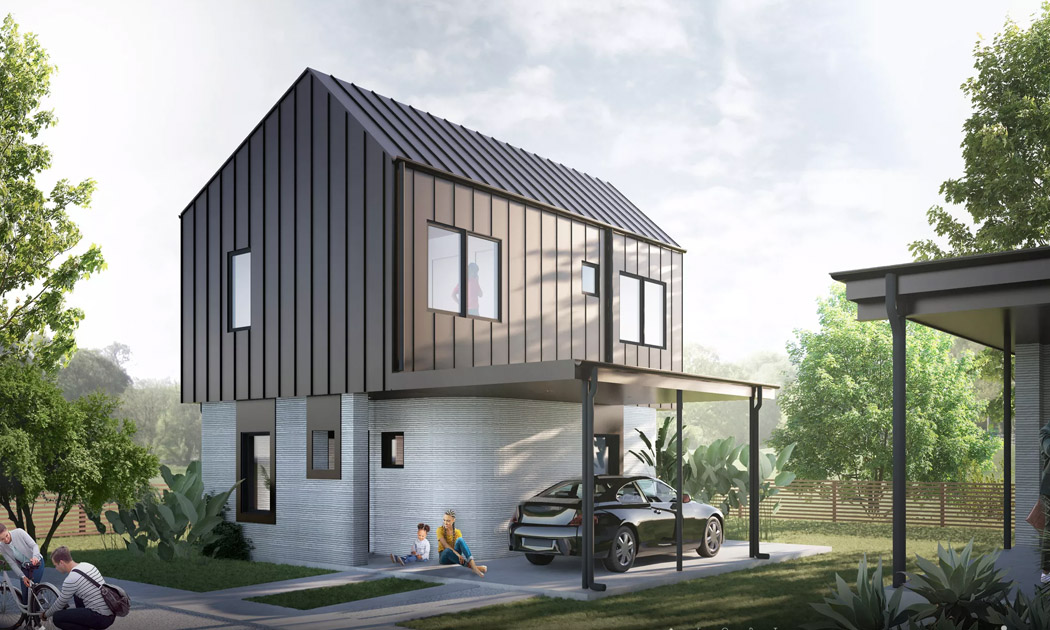 In an attempt to deal with Texas’ extreme weather, ICON and 3Strands paired up and built four 3D printed houses in Austin. They’ve been created from ICON’s special cement-based material Lavacrete, which is from Portland. The material is prone to extreme weather conditions and is also resistant to mold. The 3D technology used by ICON is proven to build safer and disaster-resilient homes. The homes are able to withstand floods, wind, fire, and other natural disasters more successfully, in comparison to ordinary homes. The four homes expand from a one-bedroom to a four-bedroom, and also include parking, front porches, and gardens! They are spacious living spaces that will protect the residents from the harsh storms of Texas! 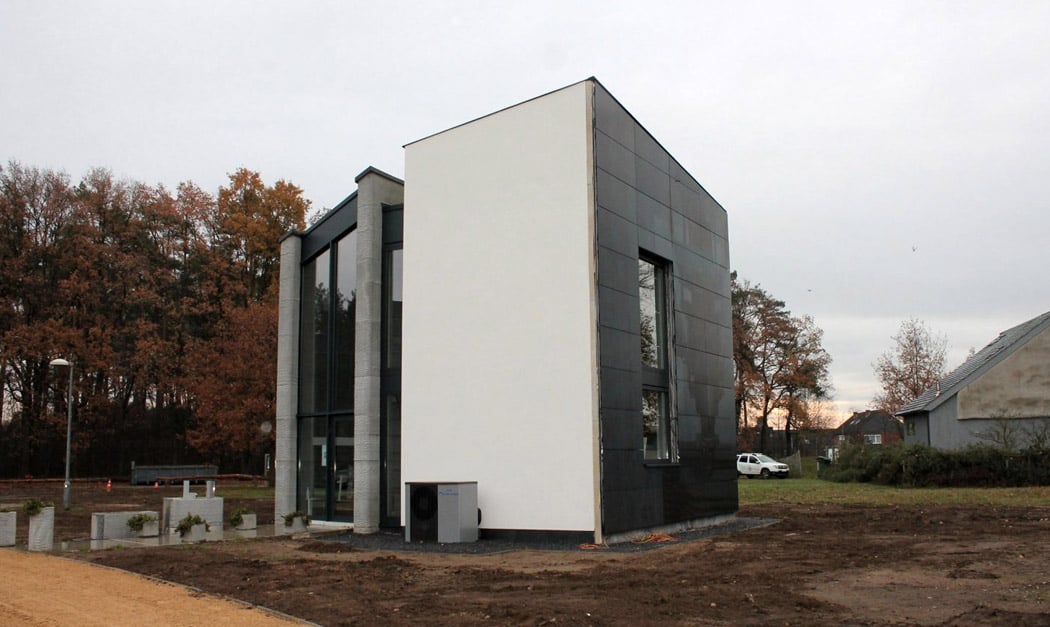 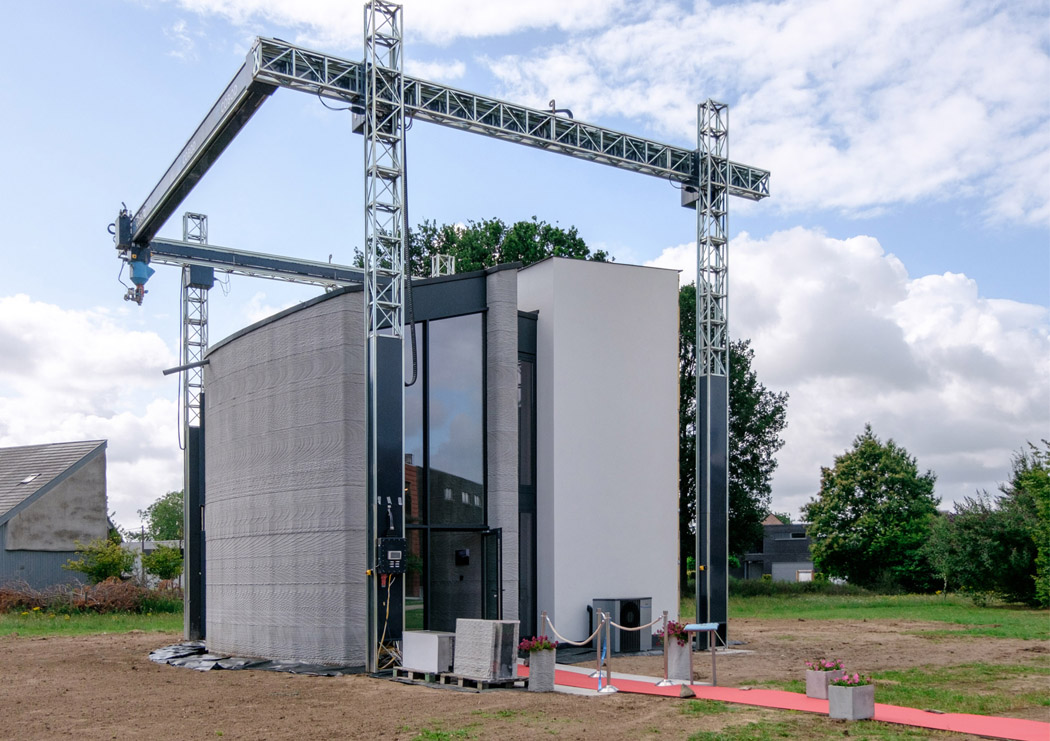 Kamp C claims to have built the first 3D printed house in one piece in Westerlo, Belgium. The house was printed from the largest 3D concrete printer in Europe. Comprising of two floors, it was built on-site! It is eight meters tall with a 90-square-meters floor area and was assembled pretty swiftly. The 3D printed house is a low-energy one and features floor and ceiling heating, a heat pump, and special solar panels. They’re even planning to add a green roof! 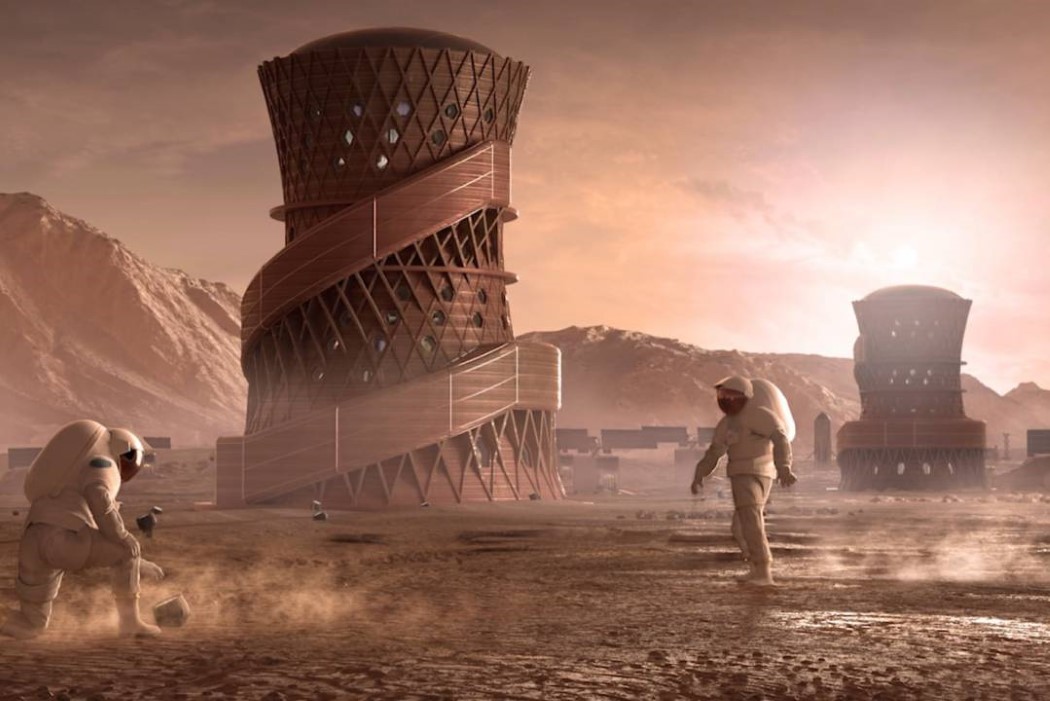 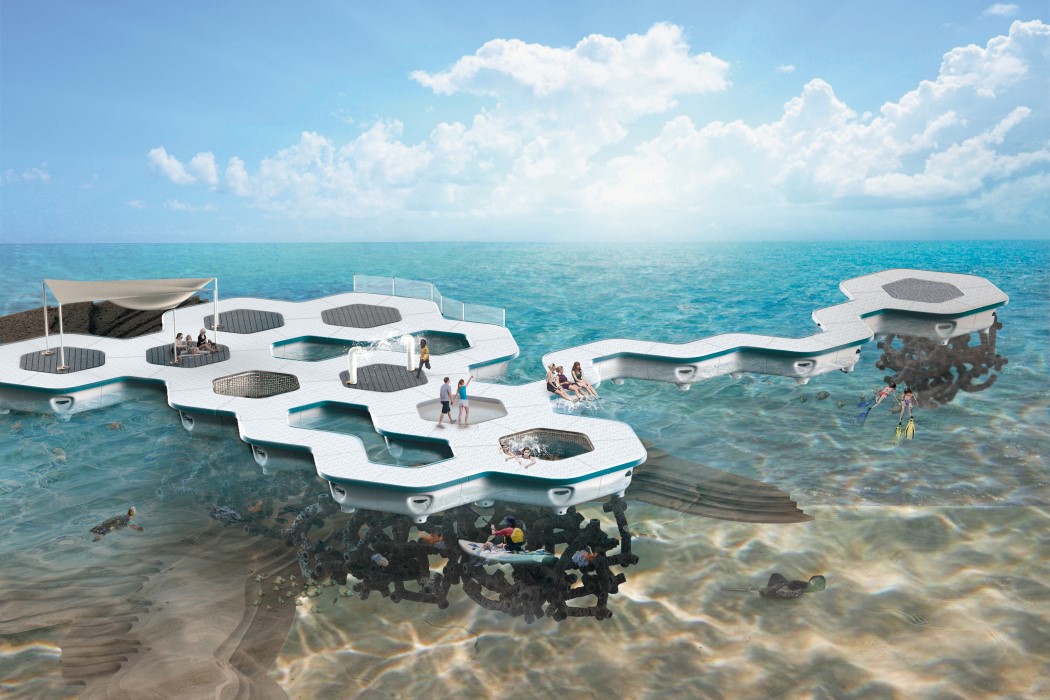 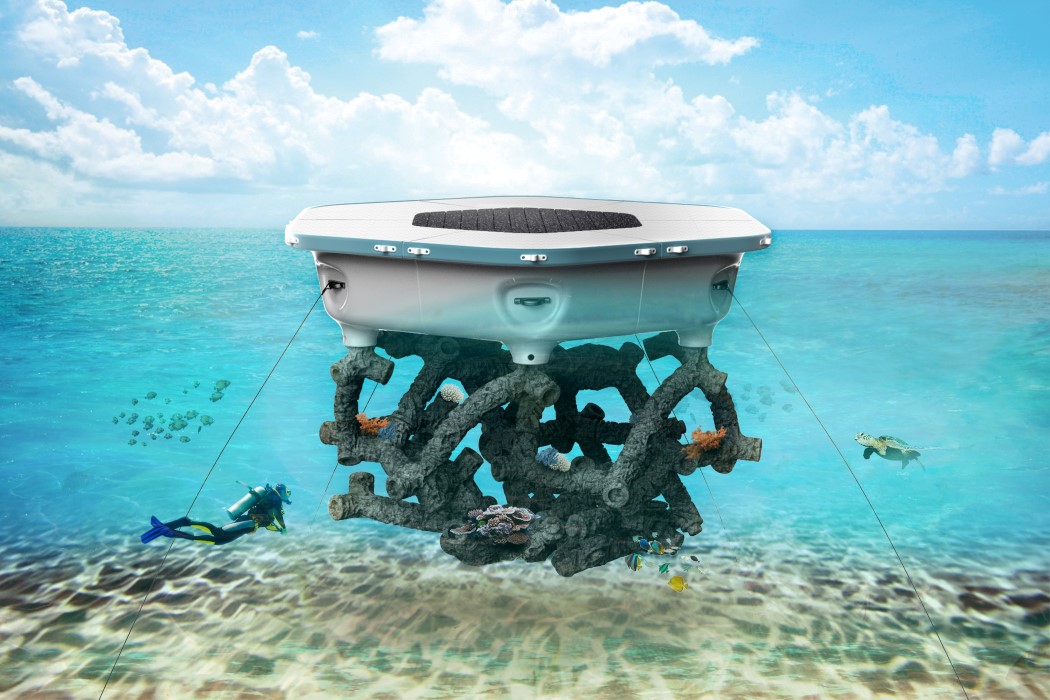 Designed as a series of modular islands that can transform any waterfront into a public space, Reeform aims at supporting life on land as well as underwater. A portmanteau of the words Reef and Form, the floating island comes with a two-part design. The upper half is designed as a hexagonal floating platform crafted entirely from recycled plastic, while the lower half bio-mimics the design of corals, using 3D printed concrete and calcite. As a result, both the upper and lower halves act as areas of interest for humans and marine life alike. Humans can use the modular platforms to create social spaces on water bodies like riverfronts, lakes, or pools, while the coral-inspired lower half helps reduce ocean acidification as well as promote the growth of live corals which in turn creates its own marine ecosystem, attracting fish and other underwater animals. It’s a win-win!

The Aqueous is quite an innovative design that exudes a fluid form while retaining functionality. It features a unique malleable disk that allows you to…

The following writing desk is only a tiny sample of what designer Jody Racicot has created for Modern Revision, a contemporary furniture company that presented…

The Osciblade sharpener does two pretty nifty things. It provides the efficiency of an electric sharpener without really using electricity, and it brings a new,…

Chair Designs that prove why they are the king of modern furniture!

A good chair design is extremely crucial. Whether it’s one for our work desk, dining table, or simply to lounge about in our living room,…