Imagine being able to write emails on a piece of paper.

The NEWYES SyncPen outwardly looks like a regular ballpoint pen, but it’s a marvel of tech on the inside. With a motion-tracking sensor on the inside, the pen turns everything you write into digital text, converting your hand-written notes and hand-drawn doodles and sketches into editable digital files.

Think of the SyncPen as an Apple Pencil or a Samsung Galaxy S-Pen that can also write on paper. Designed to look and feel like a regular pen, the SyncPen comes with an in-built micro-camera that captures what you write at a frequency of 200 frames per second, turning all your notes into digital text that can be stored infinitely, edited, and even searched through. The pen digitally records all your notes onto your smartphone, allowing you to seamlessly transition between digital and physical timekeeping. If you ever need to refer back to your notes for a certain piece of text, you can search for it either by word or date, much like within your phone’s own note-keeping app. The SyncPen’s functionality works across 66 languages and can even transcribe and translate mathematical symbols. The pen actively performs handwriting recognition, allowing you to write in your own personal writing style while the pen actively works to translate it on its own.

However, there’s more to the SyncPen. The pen itself comes with a detachable refill system that lets you replace the ballpoint nib for a capacitive tip, allowing you to use it on digital devices as a regular stylus too. When paired along with the NEWYES LCD Tablet, the SyncPen can take notes digitally too, allowing you to use it as you would an iPad and Apple Pencil. You can use the 10″ LCD Pad as a paperless alternative to a notebook, but moreover, the pad lets you take notes in different colors, while also allowing you to perform activities like directly send your notes as an email to others, collaborate with teams to share notes, and even record audio logs alongside your text.

Together, the SyncPen and its companion LCD Tablet (should you choose to use it) hope to revolutionize note-taking. The pen itself has the ability to digitally transcribe documents across multiple languages and handwriting styles… all in a form factor that’s as thin as a ballpoint pen itself. The SyncPen weighs a mere 20 grams, and works no matter how you hold it. It runs on Bluetooth 5.0, seamlessly sending written text to an app on your phone which can then convert your notes into a variety of formats, from a Microsoft Word document to a PDF or a JPG. Moreover, it means being able to take endless notes without worrying about losing your notebook or not being able to find a particular piece of information. The SyncPen lets you keep digital copies of all your notes and doodles, whether they’re minutes of a meeting, sketches of a product idea, a mindmap of a business model, or notes of a lecture. Oh, and the pen and LCD tablet come with a price tag of $99, which sounds pretty unbeatable to me! 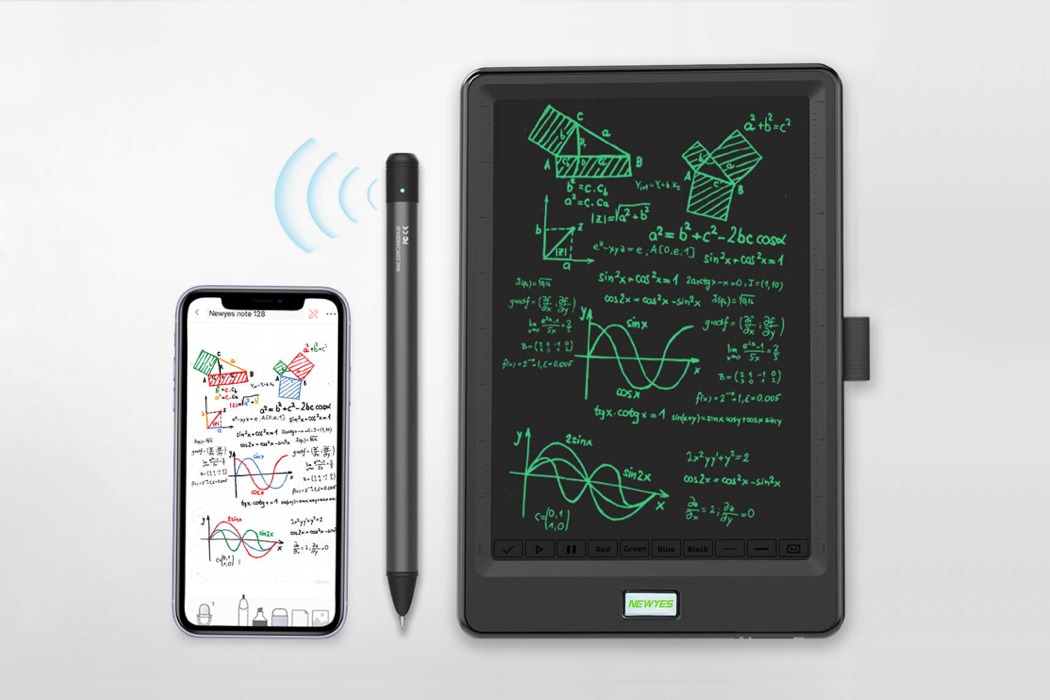 The SyncPen fees like an ordinary pen and lets you take notes repeatedly on NEWYES LCD pad without wasting a single sheet of paper, then easily synchronize with your devices. 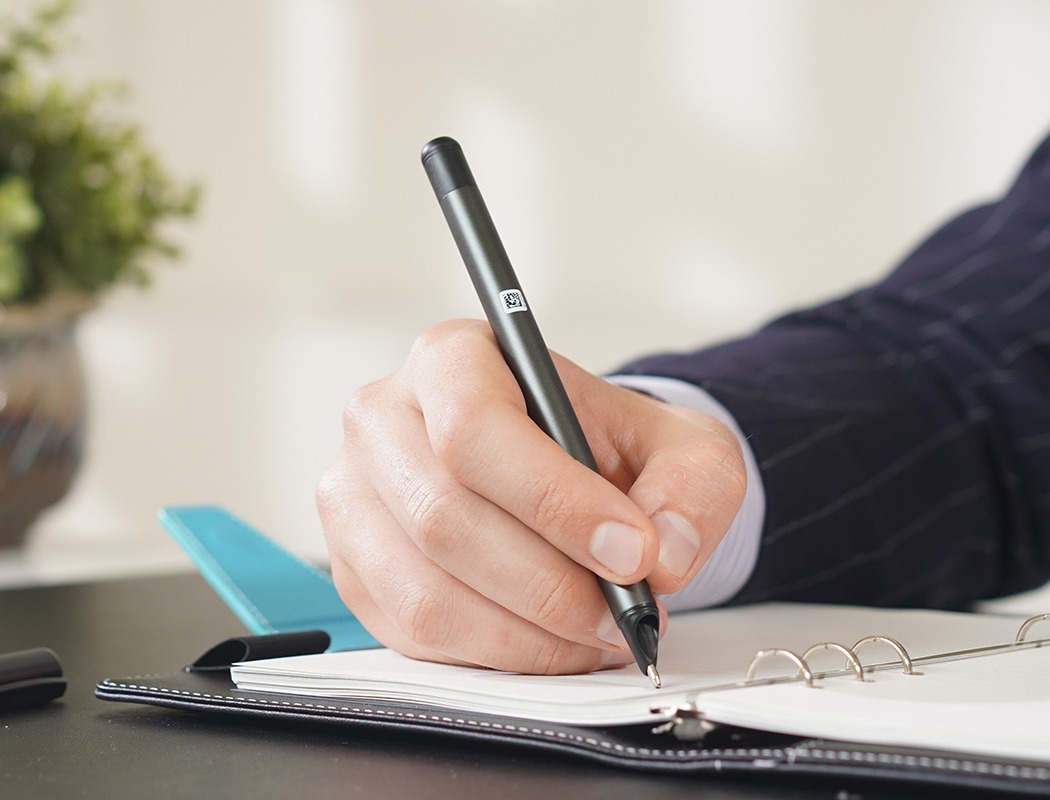 The SyncPen is your best choice if:

The SyncPen is not just a smart pen but an artificial intelligence writing system. There is a hidden micro camera inside the pen (with the lens recognition speed and ability to capture more than 200 frames per second) which is used for scanning the dot matrix coordinates of the notebook (or LCD pad) in real time, and completing the writing trajectory positioning and transmission to their app.

With their LCD pad and notebook set, you can easily synchronize everything you write (on paper, or on LCD pad) to their app at anytime and anywhere. You can even upload your content to the cloud to make sure all your notes accessible when needed.

This second edition NEWYES SyncPen is compatible with all pen holding habits. What’s more, with 1024 pressure levels, the pen allows you to sketch and draw perfectly and precisely. The writing experience is fluid, precise and easy.

Normally, for most smart pens, if you want to connect it with a device, you need to press on button for a few seconds which is inconvenient. With the latest NEWYES SyncPen, you don’t need to do anything but to remove the pen cap, which is exactly the same as what you do when using an ordinary pen. 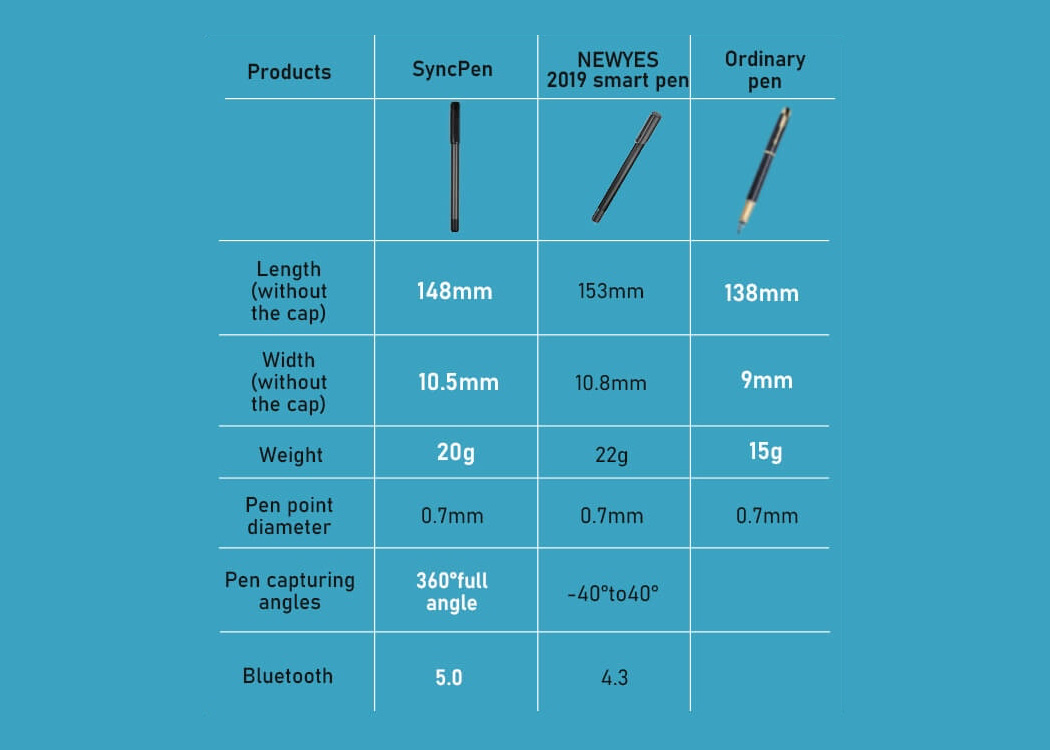 You can take notes on their LCD pad without wasting a single sheet of paper. And when you finish your work, you just need to tip (“√”) and then delete the screen. You’re able to start a new page while your last page is now saved. All can be done even without a phone.

In the past, you could only change the color and thickness of the handwriting notes in the app. With this upgrade, the team has added a ribbon at the bottom of the LCD pad where you can change color and line thickness. Again, even without touching the app.

When you finish writing, touch the “email” icon. The page will be sent to preset email address. With all above, you can sketch, write, or draw on the LCD pad over and over again without wasting paper. Great for you, and even better for the environment.

You can add several voice memos to your notes by tapping the “play” and “pause” icons on the LCD pad and the voice will be linked to your notes automatically. It’s easy to delete any voice memos if you need to, and it works the same in the app. Start and pause the recording from the LCD pad.

It is not always necessary to keep your phone nearby when you’re writing, because the NEWYES SyncPen can store up to 800 pages of notes while offline. As soon as you connect with the app, the NEWYES SyncPen will transfer them to the NEWYES Note app immediately. 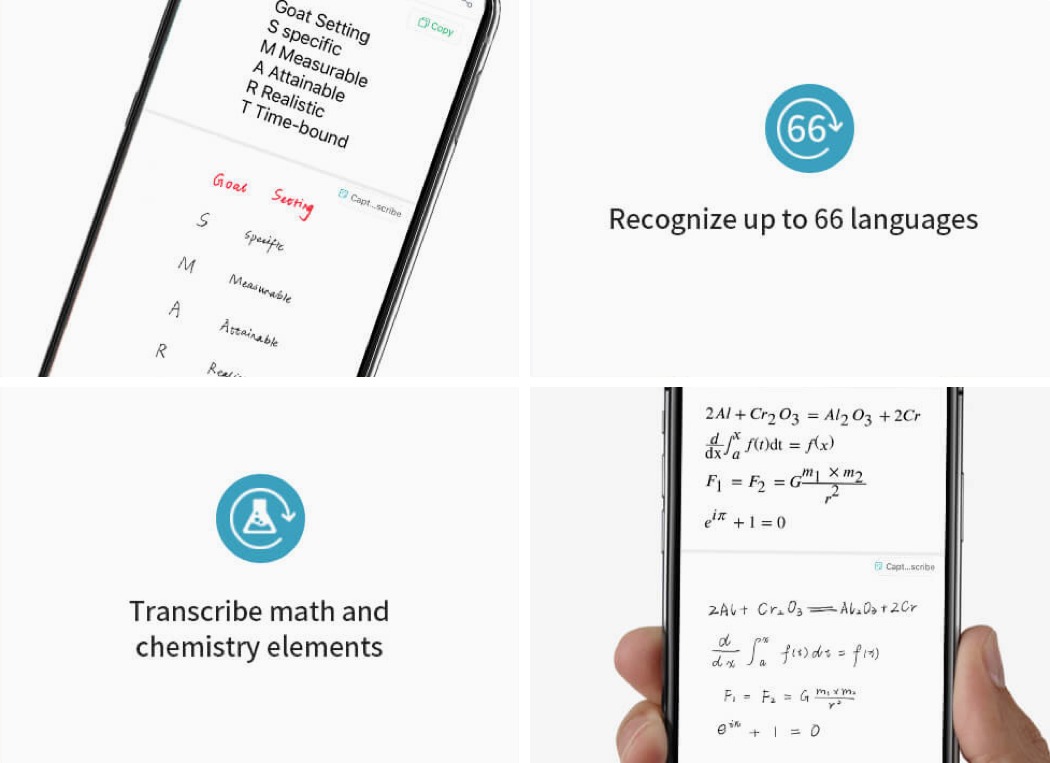 Supported by industry-leading technology, your handwritten content can easily become editable text. The NEWYES NOTE app comes with handwriting recognition that not only recognizes up to 66 languages but also chemistry equations and mathematical formulas.

Bet you have had trouble finding your previous notes. The NEWYES NOTE app has solved that problem.

You can tag your notes for better well-organized classification. Also, you have the ability to find your notes by searching by keywords. 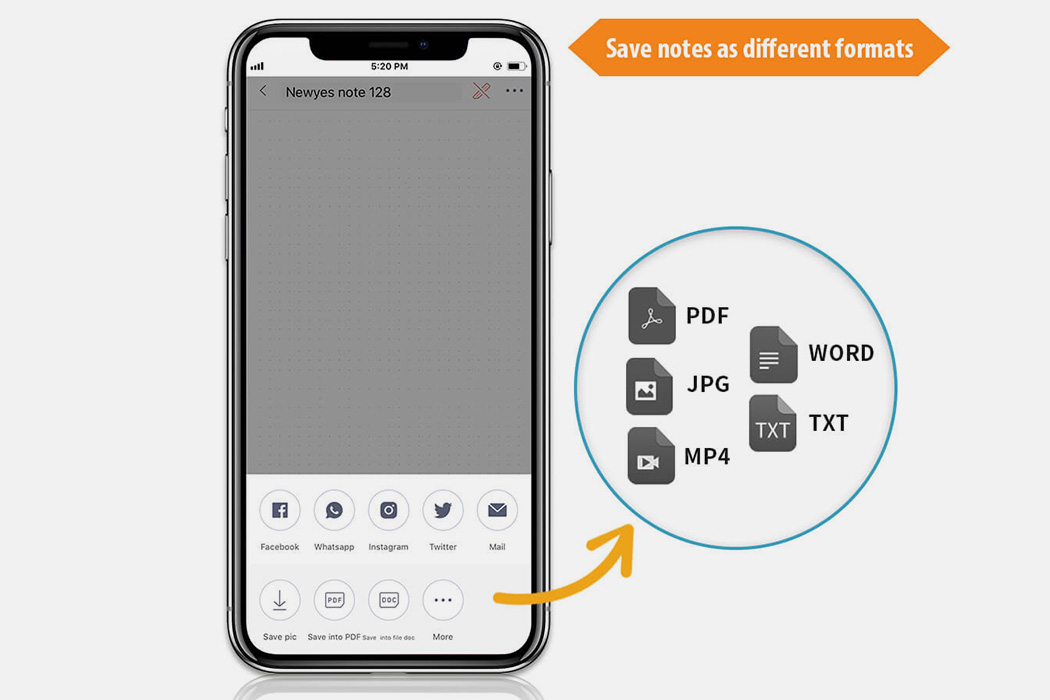 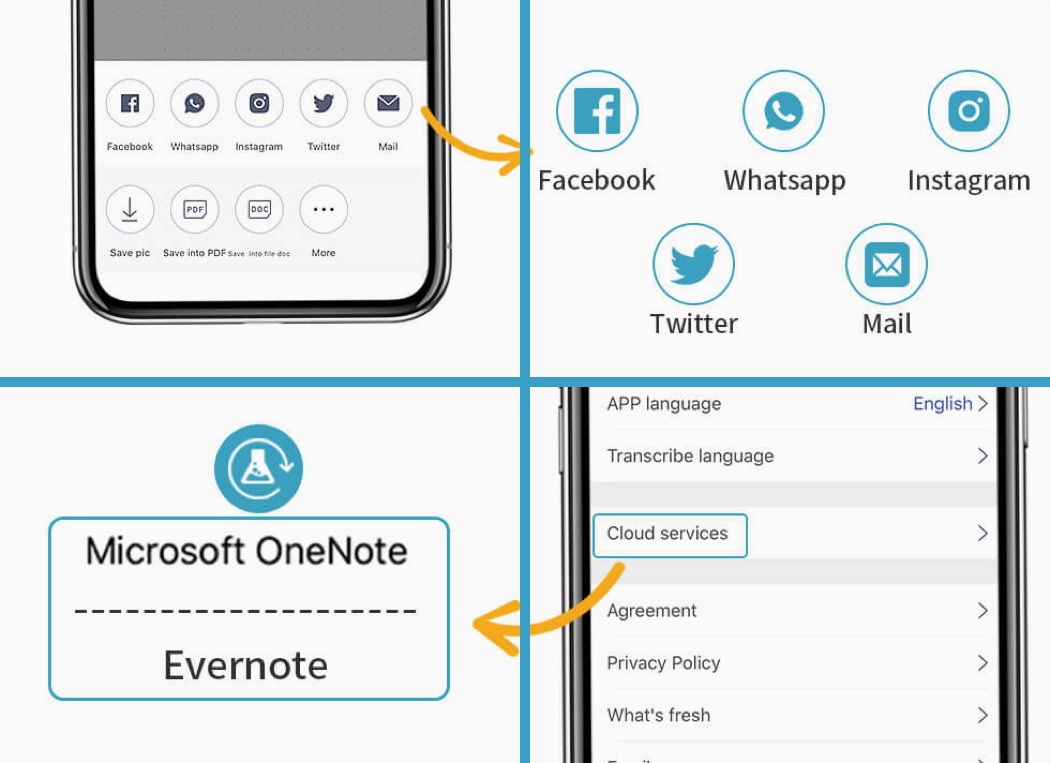 With the NEWYES SyncPen, your notes and ideas can be automatically uploaded to your preferred cloud storage such as Evernote, OneNote. (They will unlock more cloud services for following months). You can also share your notes in social media.

The NEWYES NOTE app is able to play back your notes and ideas. You can even share them with others and allow multiple people to “see” and “hear” the process of your thoughts at once. 1x, 2x, 4x video play speed. 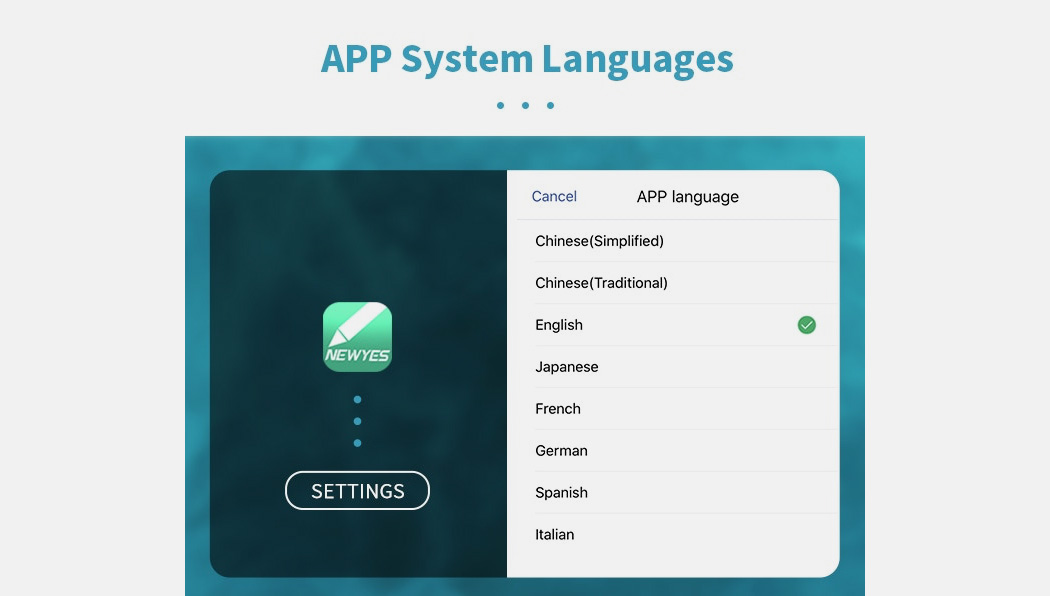 The OCR (character recognition) function has been updated so that, through the NEWYES NOTE app you can recognize the text in pictures and convert it to plain editable text in seconds.

The NEWYES NOTE app will offer you the basic functions, like highlight text, changing the font, color and thickness, replace page backgrounds, blank or grid pattern and so on. 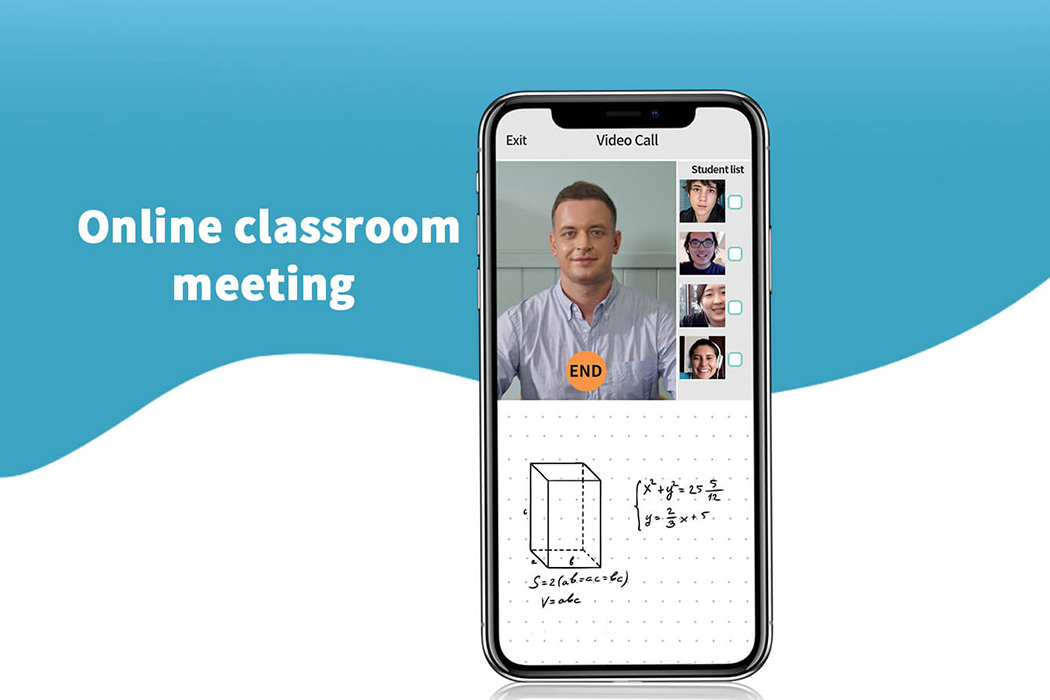 With development of NEWYES technology, teachers and students, people who lives different places can easily achieve online teaching with SyncPen. It is also a great meeting tool for home office users. 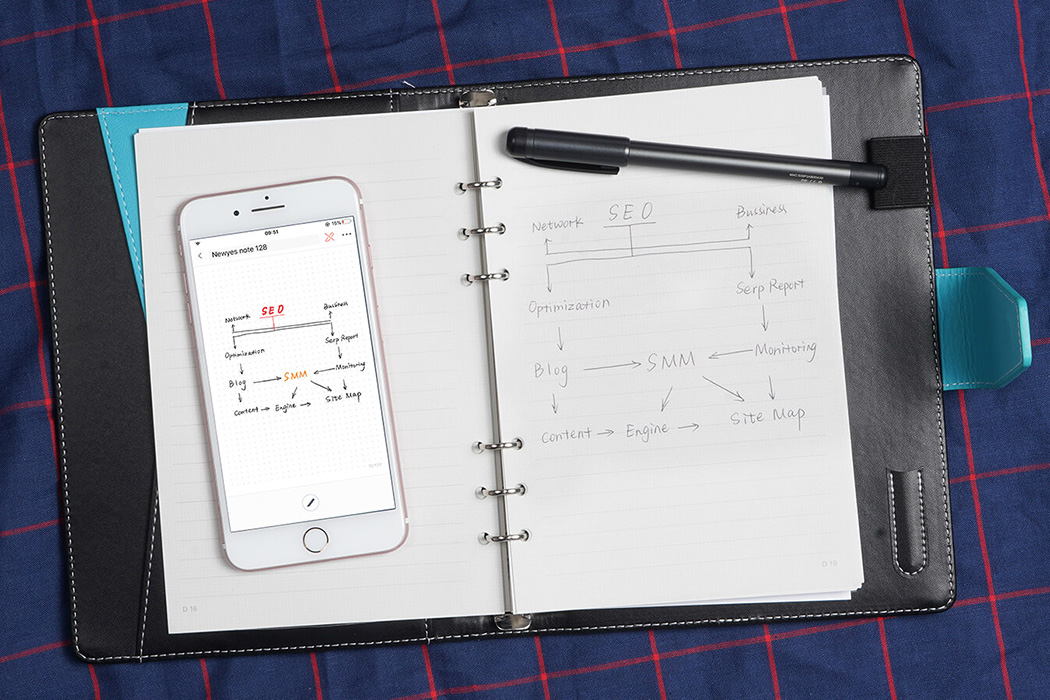 Eleven isn’t just a number or that fictional character from a TV series. Eleven can soon be known as a special desk designed to make…

Most third party accessory makers rely on Apple’s short-sighted approach to design. An entire ecosystem has been created to rectify Apple’s design “errors”, if you…

Modern technology enables us to make some incredibly thin products, still big on features with a natural inclination towards minimalism. That’s the idea behind a…