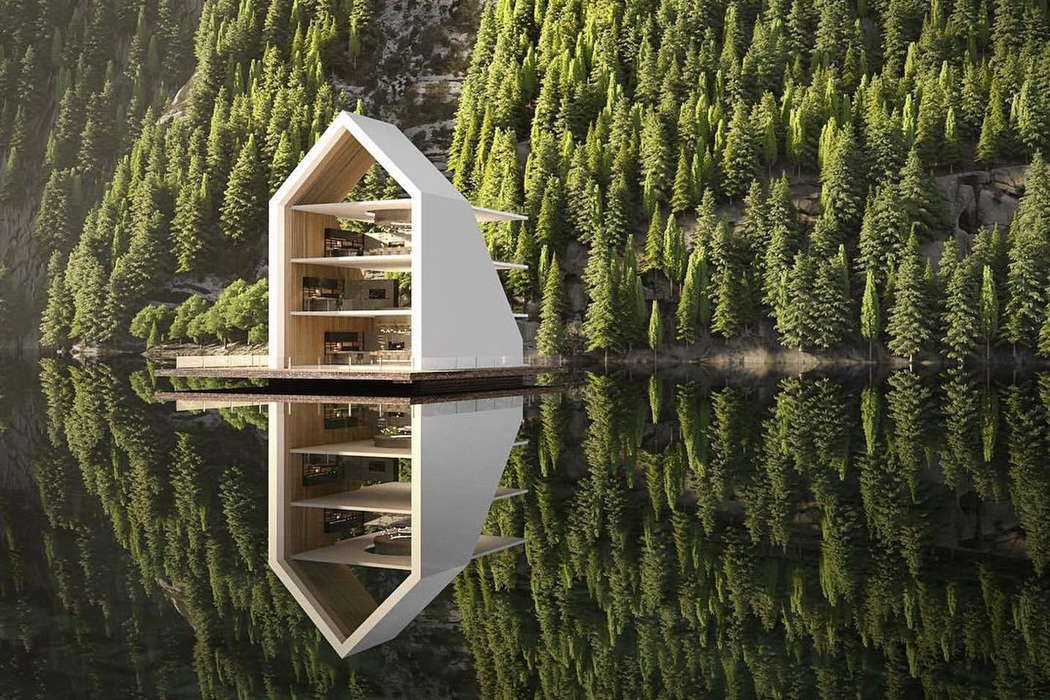 Cabins have long since had the reputation of being a little wooden structure with basic amenities, meant for plaid-clad angry men who cut off from the world. Well, the plaid-based clothing aside, there is something amazing of being in the lap of nature. Our collection here today reinvents the traditional cabin designs for a modern, even futuristic look. These cabins are designed with meticulous attention to detail, filled with modern-day amenities so you can interact with nature while being comfortable! The architects here have also paid heed to the fact that the design blends in with their surroundings instead of disrupting them! 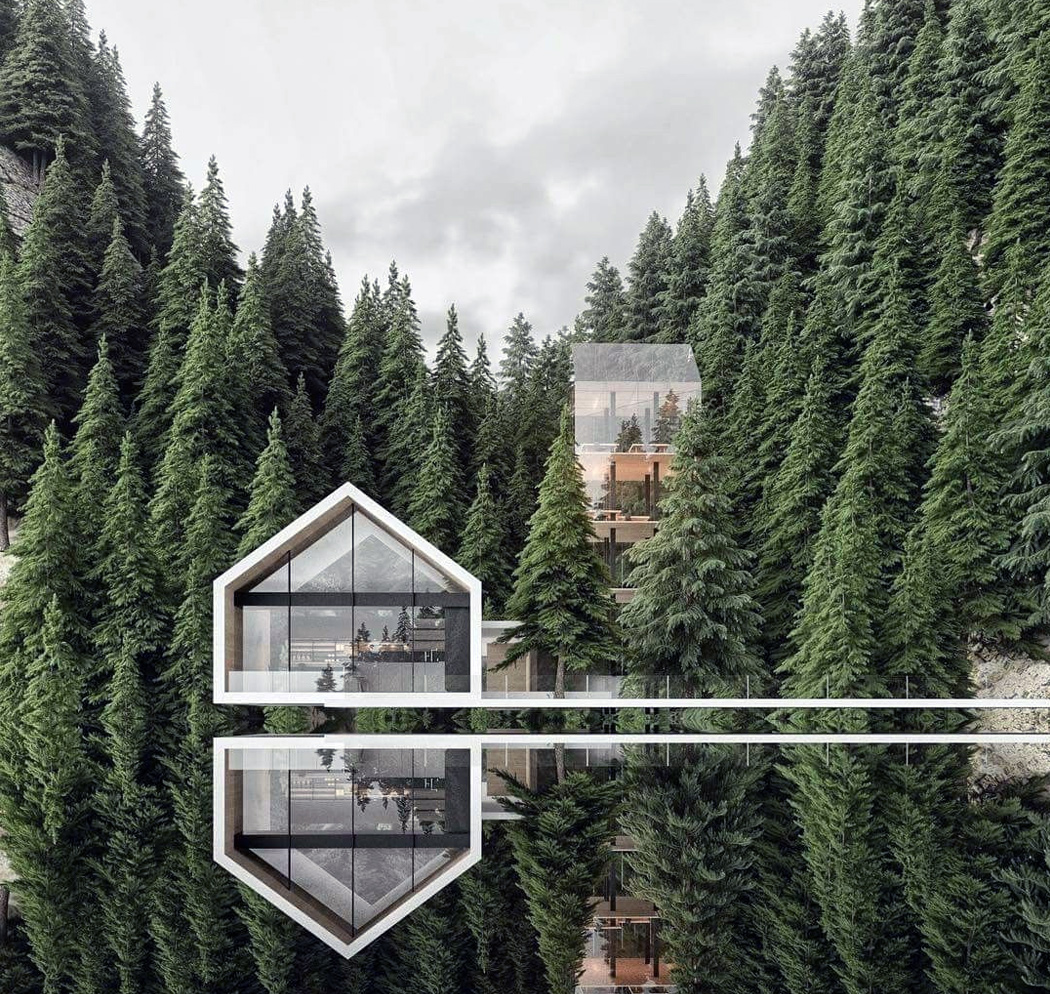 The beautifully rendered House by the Lake by Alexander Nerovnya. 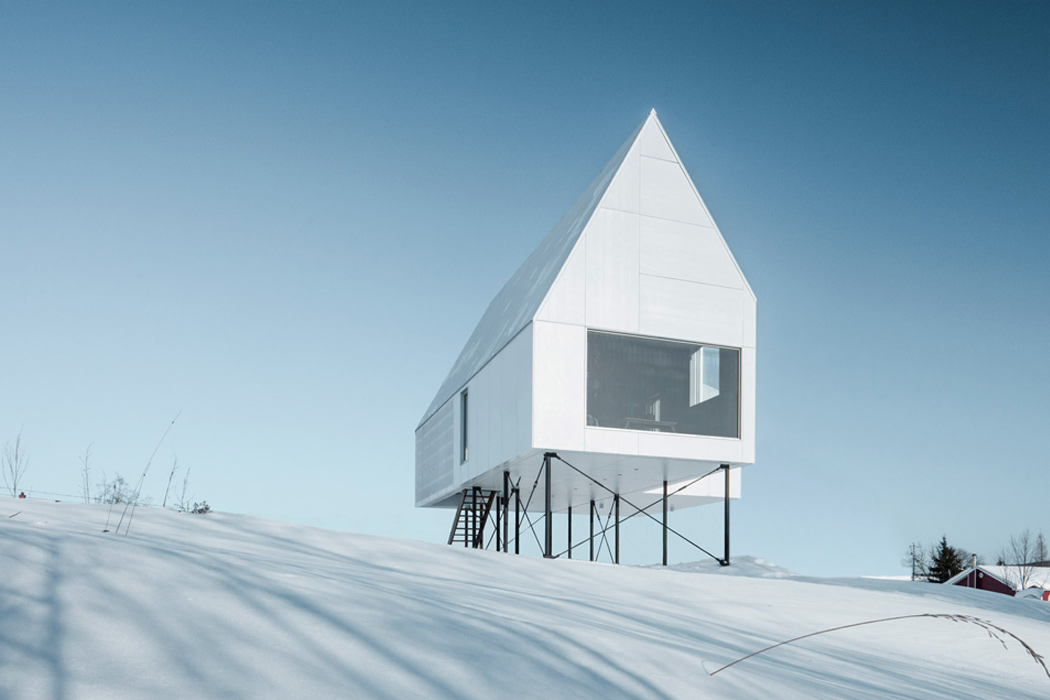 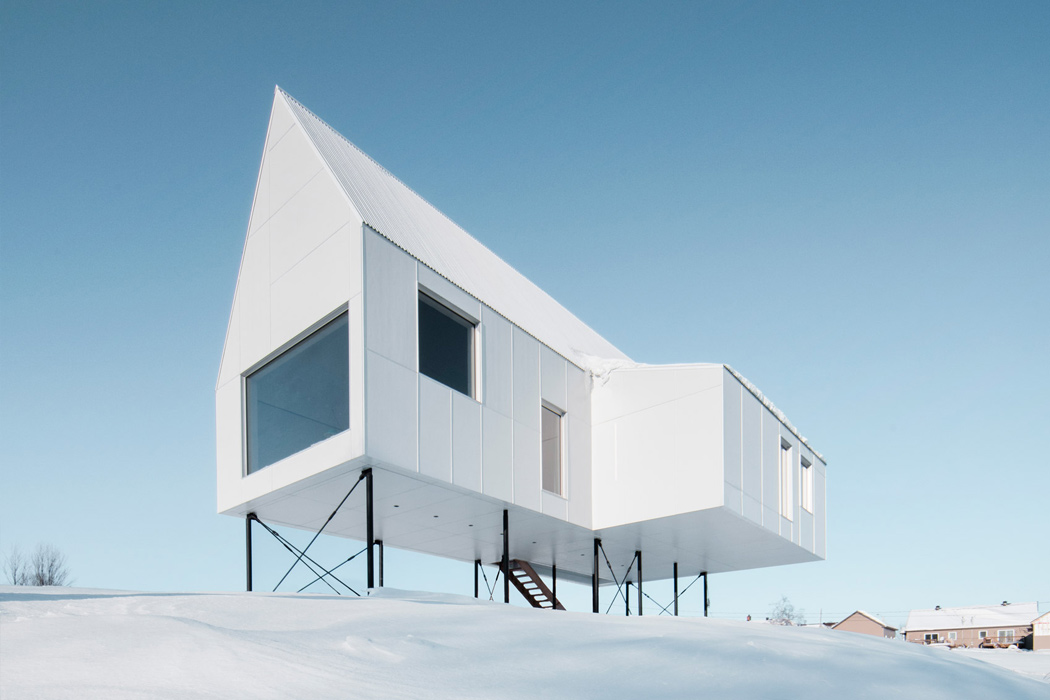 Stilts keep this small winter cabin elevated above a snow-laden slope in Quebec to protect an outdoor lounge sheltering beneath its base with a warming stove by Delordinaire founders Adrian Hunfalvay, Erwan Lêveque, and Jean Philippe Parent. “This winter chalet uses the stilt typology to create a protected ground floor area with an outdoor stove, providing an unusual space where residents can be amongst nature and the snowy exterior, while still enjoying protection from the elements.” 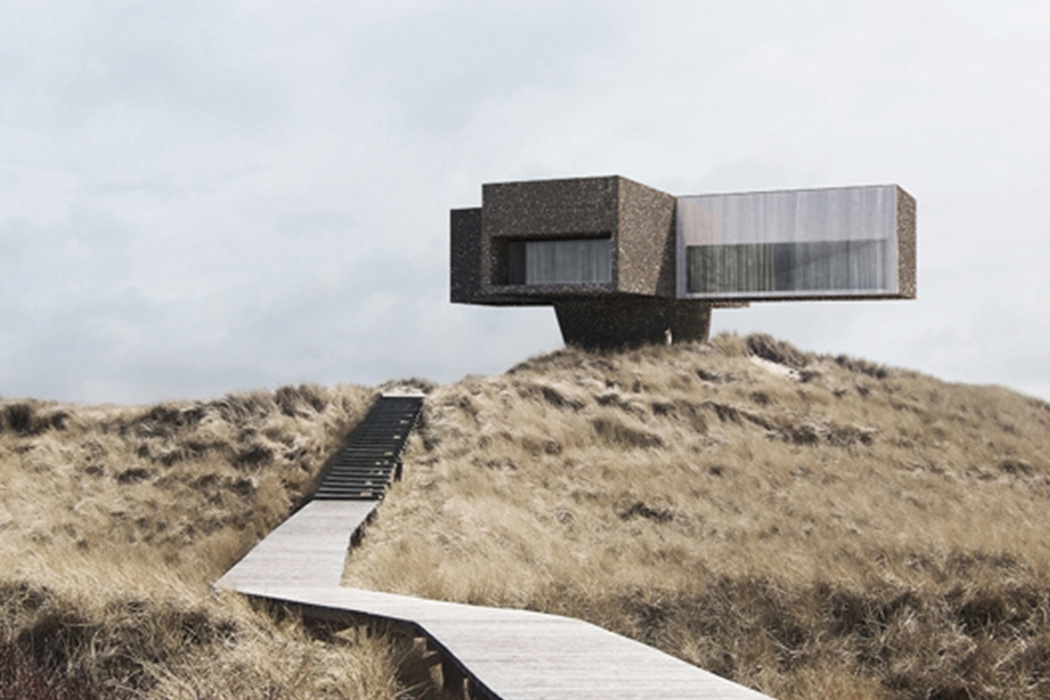 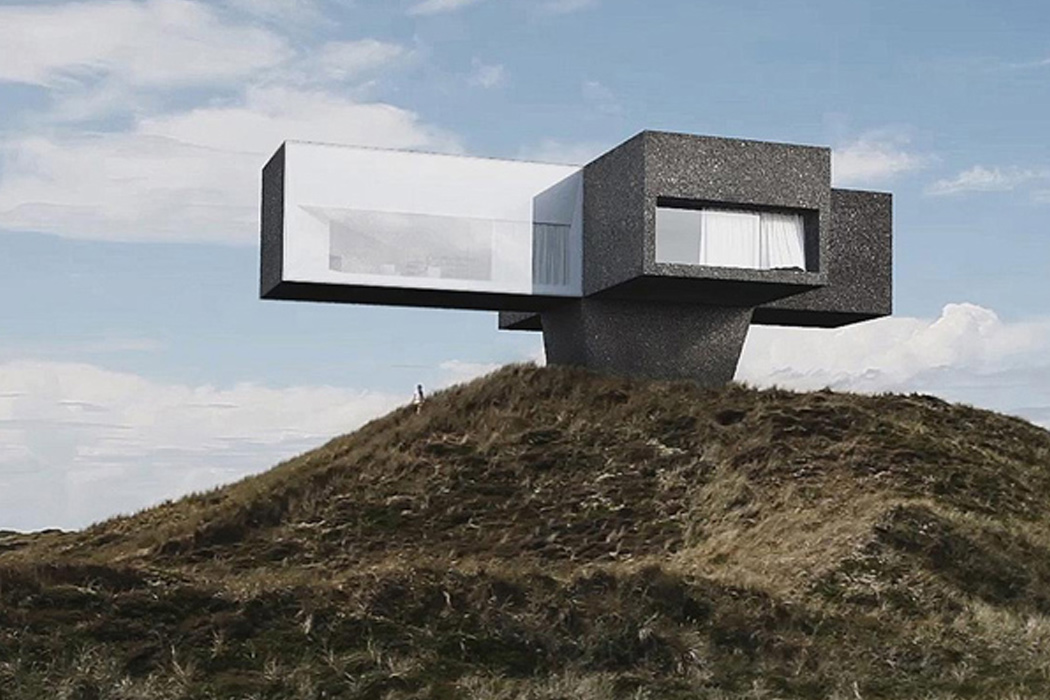 This cross-formed building named the Dune House is designed to orient itself to the four cardinal directions, and in turn, considers light as the fifth element orienting and driving the design by Viktor Sørless. 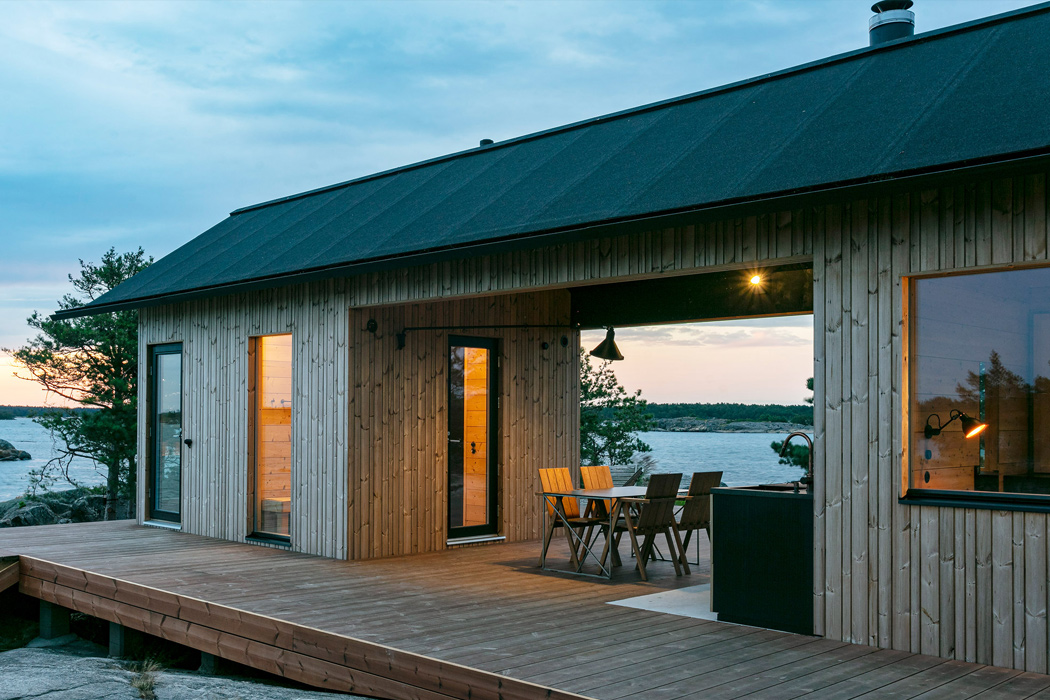 Finnish designers Aleksi Hautamaki and Milla Selkimaki have built a self-sufficient summer house. In order to be completely self-sufficient, the cabins source their energy from roof-mounted solar panels and use filtered seawater for drainage, sinks, and toilets. Hot running water is produced as a by-product of the sauna’s stove, and the same system provides heating to the floors of this Project. 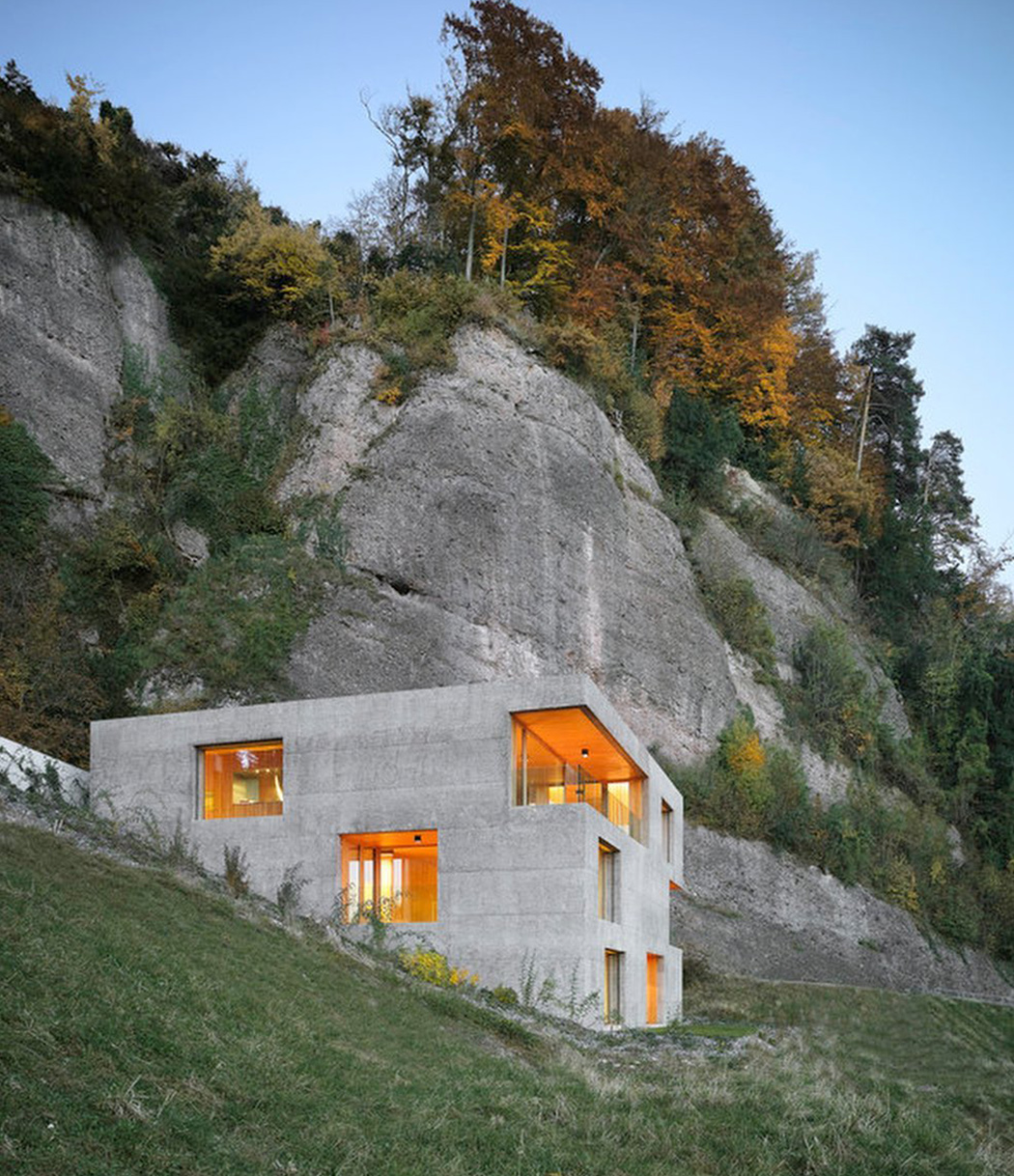 For this Holiday Home in Vitznau, “The clients’ desire was to live in a timber house. However, the challenging geology, the exceptional hillside location, and the existing environment prompted us to design a solid concrete construction in which rests the soft core of the timber house.” said alp Architektur Lischer Partner. 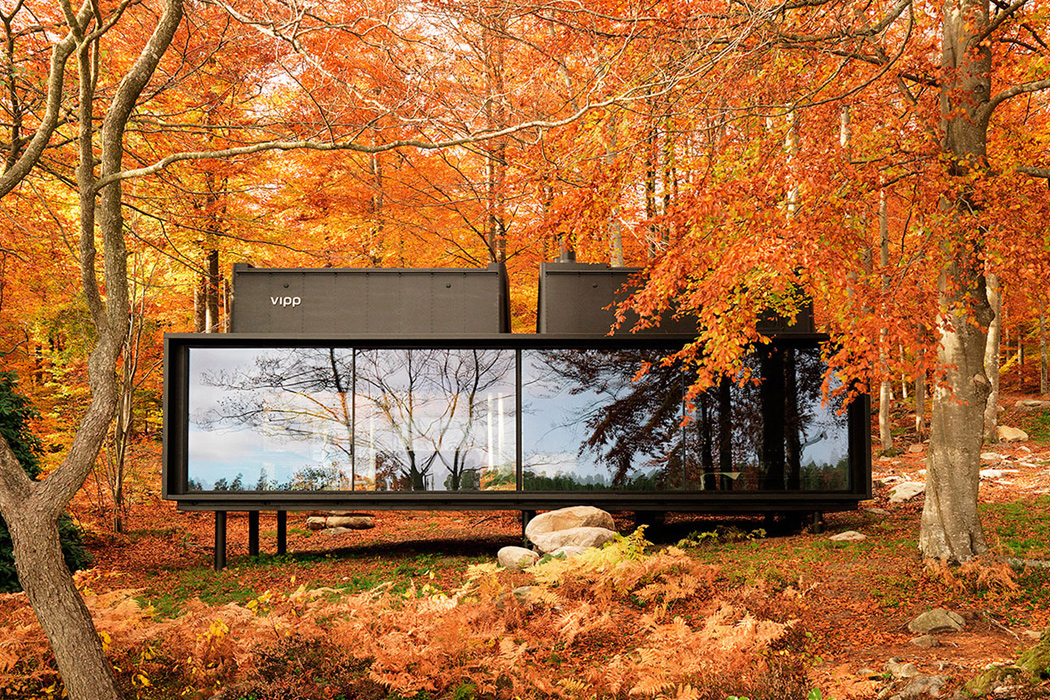 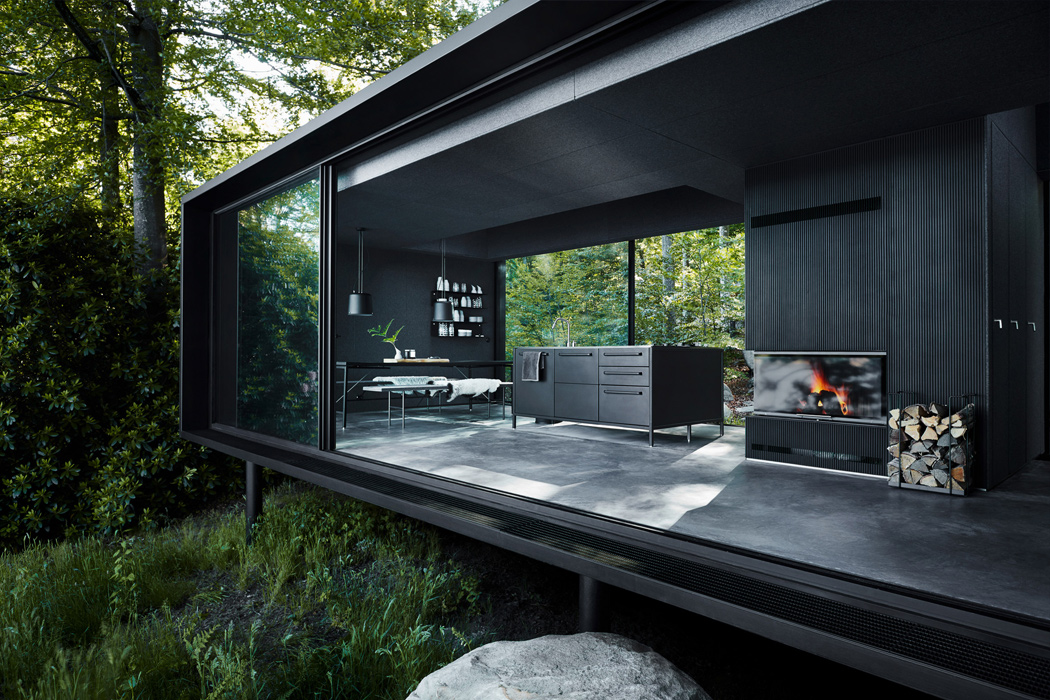 Danish retailer Vipp is now offering guests the opportunity to stay in a prefabricated micro dwelling in a Swedish forest. The cabin provides a panoramic view of the surrounding landscape from the open-plan living area, thanks to large sliding windows. A bedroom is tucked away in one of two chimney-like chambers protruding from the roof, with the other containing a skylight. 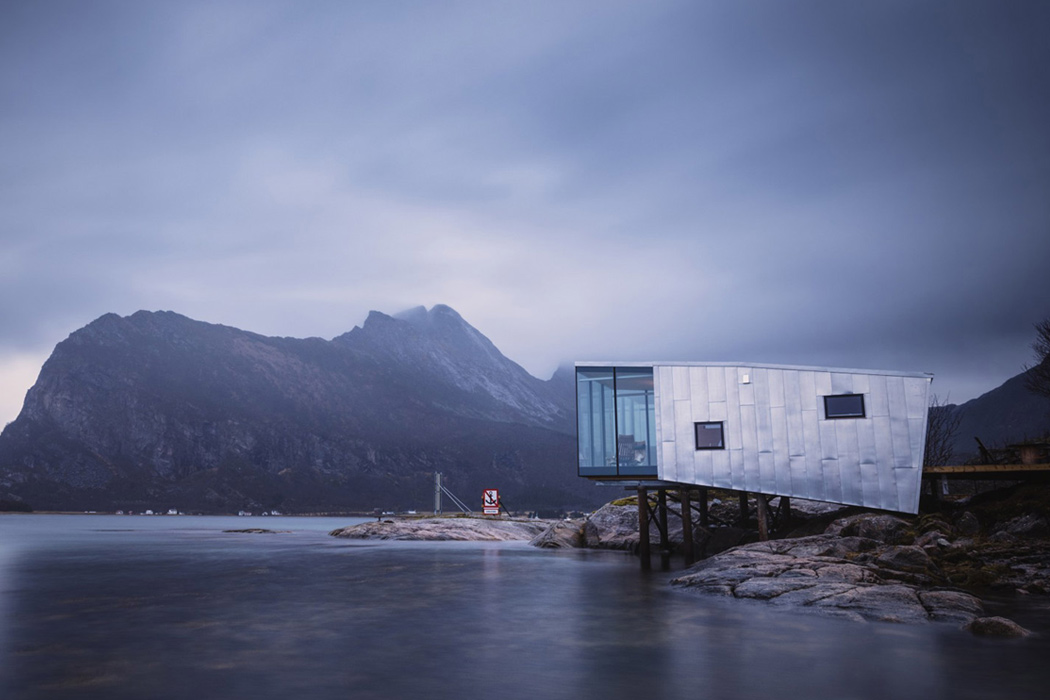 Stinessen Arkitektur has built three cabins and a sauna on an island in the remote Steigen Archipelago off the coast of Norway in the arctic circle. Called Manshausen 2.0, the project is an extension of the Manshausen Island Resort, an eco-retreat founded by Børge Ousland, the Norwegian polar explorer who was the first person to cross the Arctic solo. 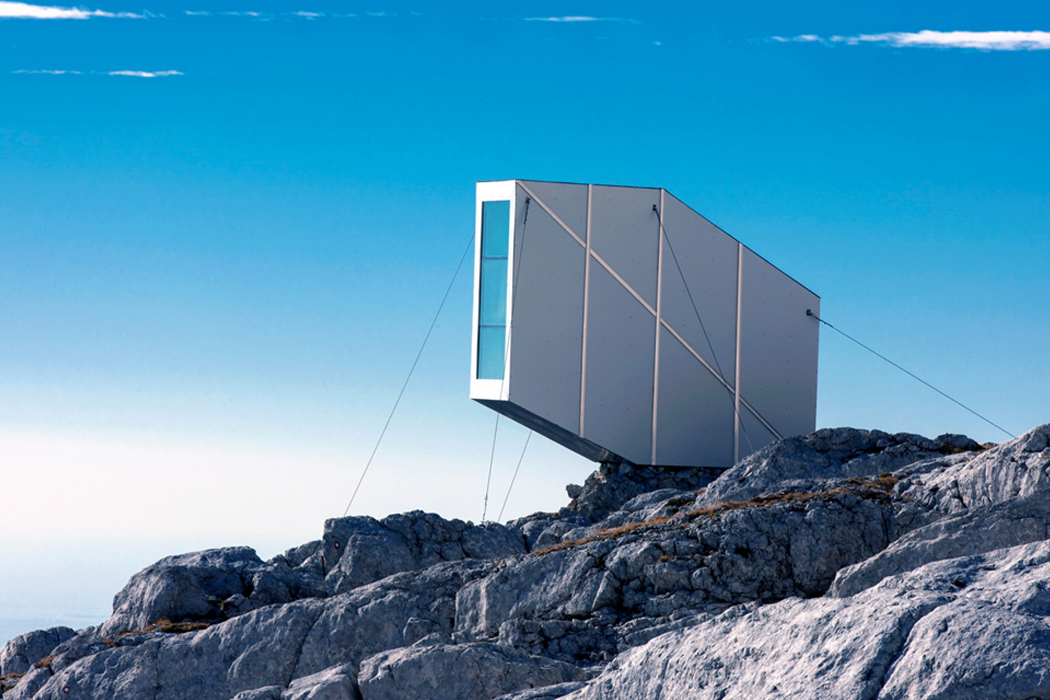 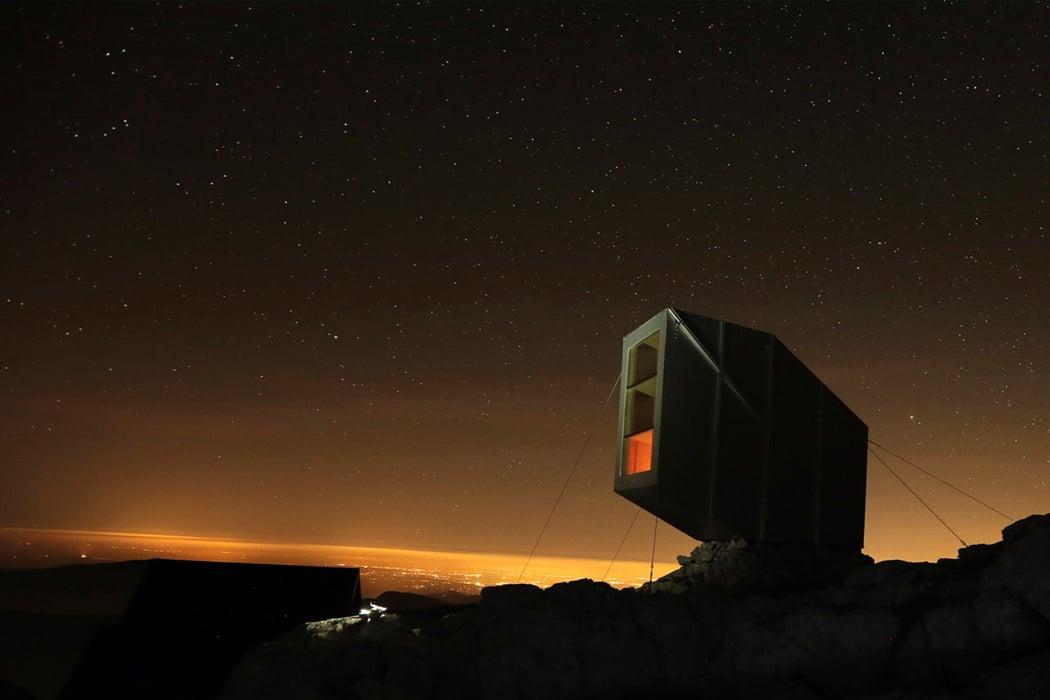 OFIS Arhitekti worked with local structural engineers CBD to develop the Kanin Winter Cabin, which is designed to resist extreme weather conditions on its exposed site on Mount Kanin. This tiny 9.7-square-meter cabin has a narrow floor plan containing three shelf-like floors and has dimensions of just 2.4 by 4.9 meters. It is made from a combination of cross-laminated timber, glass and aluminum panels. 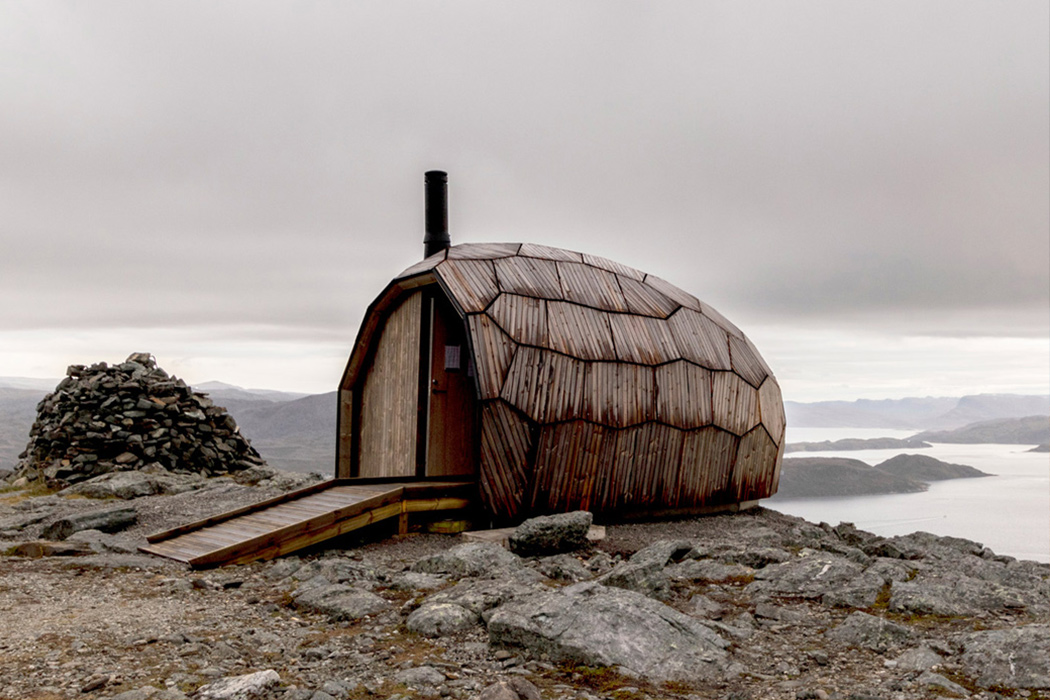 A wooden cabin with a prefabricated honeycomb-like structure, called Varden, has opened on Storfjellet mountain in Norway by Spinn Arkitekter. It has an “organic” prefabricated framework, developed in collaboration with Format Engineers to echo its rugged arctic setting while withstanding harsh polar winters. 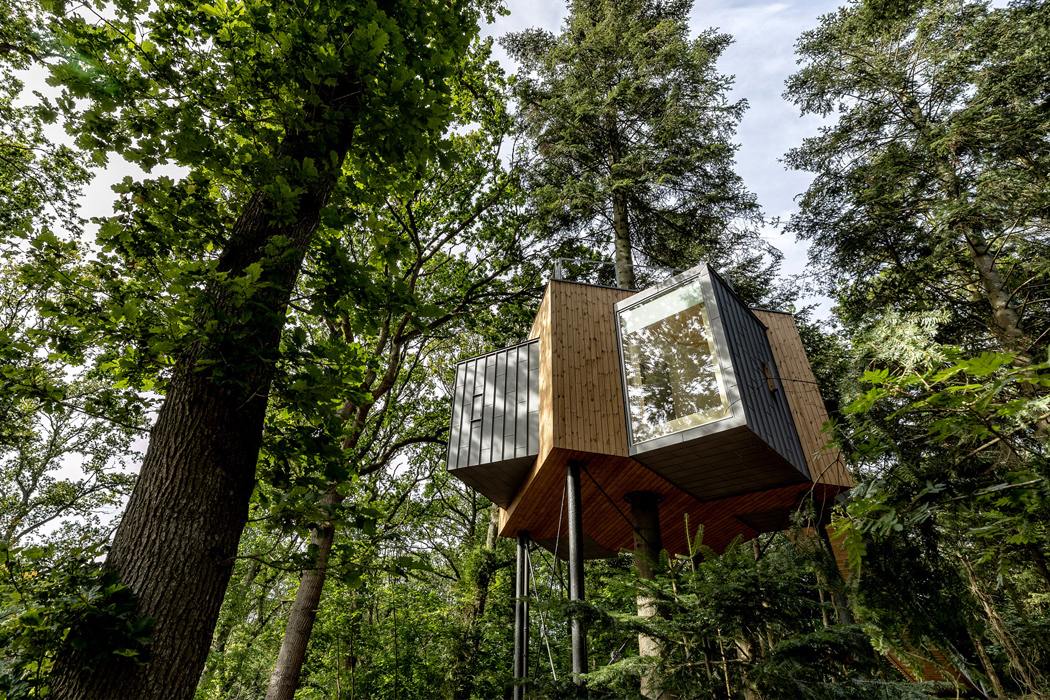 Perched eight meters above the floor of its forest site 0n the Danish peninsula of Als Odde, the cabin is a part of a new hotel designed for Lovtag by Sigurd Larsen.

Beautiful lamps are not exactly hard to come by. However, we do not always find memorable pieces that are unique and awe-inspiring. The Moonsetter enters…

If plants can refuel themselves via photosynthesis, why can’t our gadgets? The Solar Suntree is a rather neat alternative to yet another power-bank. It ditches…

Apple and Star Trek inspired the neat, interactive, and clean design and UX/UI for this coffee machine!

I love coffee, I love Apple and I love Star Trek, and thereby I love the Elemental coffee machine because it combines ‘elements’ from them…