The beauty of design is its relentless pursuit of perfection. Each designer designs a product that fulfills what THEY think is the best for the users, resulting in a diversity that’s just staggering. I’ve written about e-bikes in length, covering its multitudes of features, justifying it for the people it’s intended for, and the Calamus One, just like those bikes, is a spectacular e-bike… with a difference. It comes with features I’m seeing arguably for the first time, not just in e-bikes but in automobiles in general.

Dubbed as not an e-bike but an ultrabike, the Calamus One was consciously designed from the ground up, rather than taking an e-bike and just upgrading its motor. Take for instance the fact that the bike has proximity sensors built into the back that can identify a speeding car approaching from behind. Dubbed as the Blind Spot Assist, these sensors know when a vehicle’s dangerously close to you, giving you haptic feedback to nudge you in the other direction. Calamus One also comes with a biometric-unlock function that puts the ubiquitous power of the fingerprint-sensor into your bicycle, making sure that only people with the registered fingerprints can unlock and use it. An internal anti-theft alarm lets you know if anyone else tries to meddle with the e-bike by sending an alert to your phone, and even allowing you to track the bike’s location in real-time.

The Calamus One is a rather sleek looking e-bike that takes cues from the anatomy of a panther, using bold lines to create a form that is both minimal yet muscular. The e-bike integrates all the electronics inside its frame, including the battery that sits flush within the frame, allowing you to detach it when it needs recharging. The ultrabike’s edge over other e-bikes also comes with its dashboard which sports the fingerprint sensor to unlock the bike, and a display that runs Android, allowing you to view the bike’s stats as well as access and feed in your routes and destinations into Google Maps, for a navigational experience that feels less like a bike and more like a car. The fingerprint sensor ties in to the Calamus One’s rider-profile feature, that allows you to log in and view your riding stats on the dashboard, or even set your preferences to calibrate the biking experience to your needs.

Ultimately, the ultrabike is a performance powerhouse too. With ultra-drive mid-motors from Bafang, and carbon belts from Gates, the Calamus One gives you a range of up to 60 miles (100 kilometers) on a single charge, with top speeds that go up to 28mph (45km/h). The Calamus One comes in three variants with motors ranging from 250W to 500W and finally a 750W edition that pushes the ultrabike’s abilities to the max, while capping off its weight at a mere 20.5 kilograms.

Going beyond what’s expected of electric bicycles, the Calamus One is most certainly deserving of the title ‘ultrabike’. With features that give it a completely different DNA, like the Blind Spot Assist, or the biometric-unlock, or even the indicators integrated into the handlebars, the Calamus One sets a new threshold for what one should expect from their two-wheelers… and if you thought that wasn’t enough, you can even pair it with Calamus One’s very own connected Smart Helmet for the most uniquely advanced electric biking experience ever! 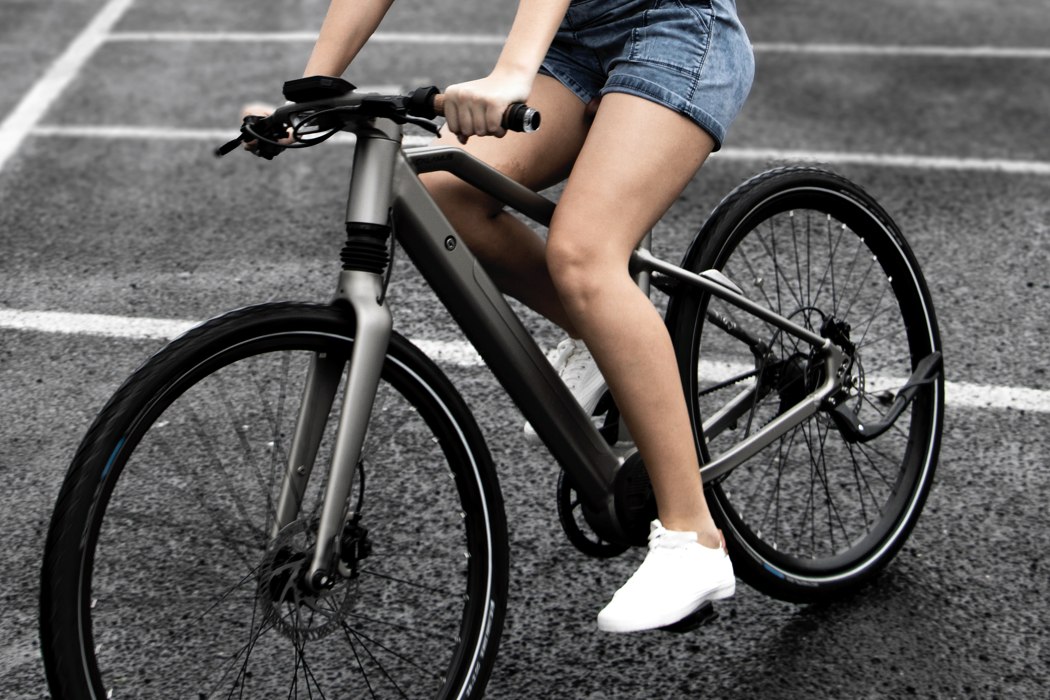 The world’s safest and most advanced electric bike with blindspot assist, biometric scanner, GPS and up to 750W of power. 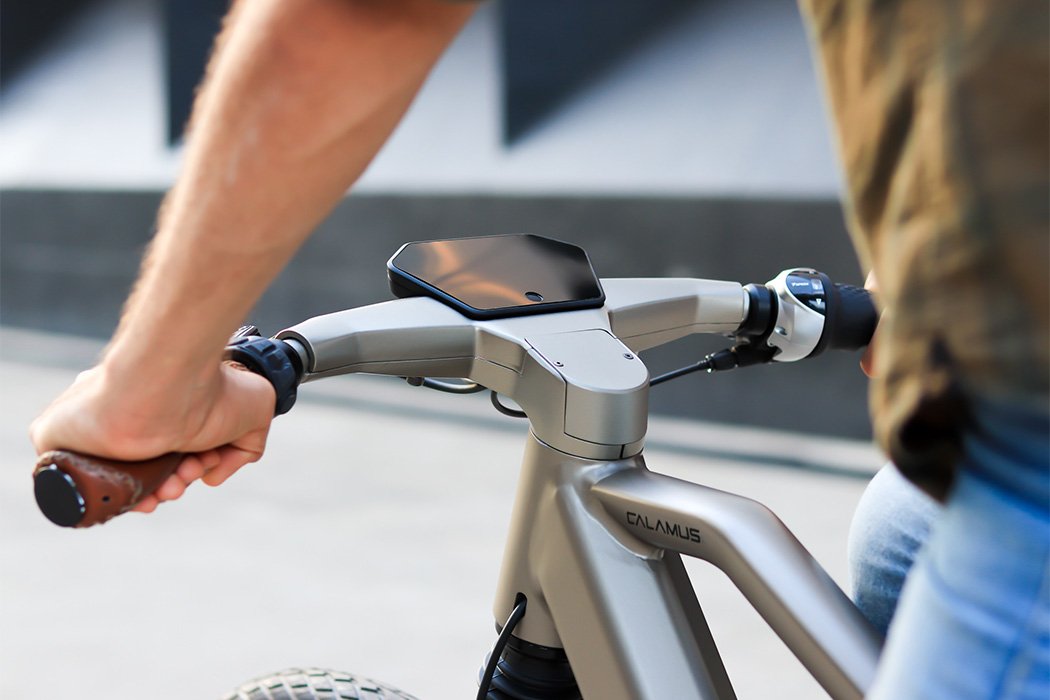 The Ultra-bike frames are custom-casted uni-bodies with 100% internal cabling. This gives the Calamus One a bespoke look, with sleek unbroken body contours. Add to this, the premium automotive-grade paint job, and you’ve got an all-round masterpiece with an elite road presence. 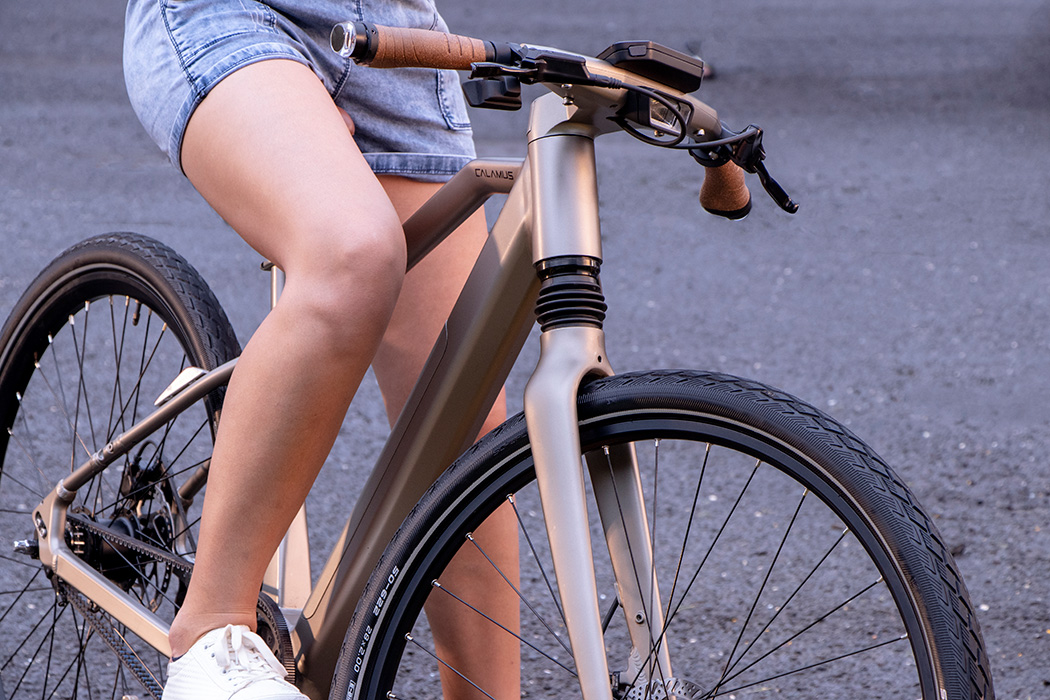 Powered by Ultra-drive mid-motors from Bafang, and driven by carbon belts from Gates, these bikes are ultra-responsive. They’re also ultra-efficient. 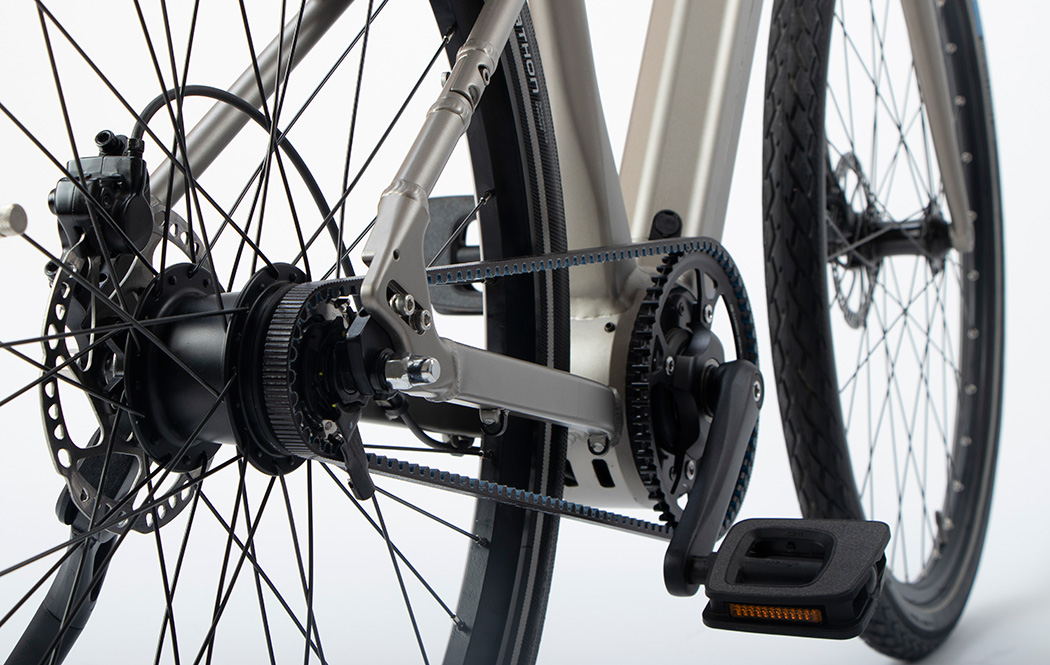 The Calamus One gives you upto 50 Miles/80 km of range on a single charge, has a detachable battery and quick-charge capabilities. With an integrated weather-proof computer and navigation touchscreen, the One is the only e-bike to offer integrated support for android apps, rider profiles, and real-time self-diagnosis.

Blind spot assist with haptic feedback. To make sure riding on the road is safe for the rider, the bike has inbuilt ultrasonic sensors that gauge traffic from behind and inform the rider if he/she is about to take a turn/change the lane by providing haptic feedback using inbuilt vibration motors in the handlebar.

Google map navigation. The bike is google map-enabled to easily navigate anywhere around the world using a global network card and a GPS chip that comes inbuilt into the bike.

Fingerprint unlock. The bike also has an ultra-fast biometric scanner for locking, unlocking and rider profile recognition. The scanner is a capacitive fingerprint scanner that is located just below the screen on the handlebar.

Anti-theft fasteners. Component theft is a big problem in all cities around the world. The patent-pending theft-proof fasteners can only be opened using a special tool that is provided with the bike. These fasteners look very similar to the conventional fasteners but cannot be accessed with conventional tools.

Anti-theft alarm & geo-tracking. The GPS and GSM worldwide chip enables worldwide tracking of the bike in case it gets lost or stolen. The bike has a built-in anti-theft alarm that works in 2 stages when someone is trying to steal or tamper with the bike. First is a warning provided to the thief in case of an attempt where the owner is also informed through the mobile app, if he/she continues tampering then a loud alarm comes on and another warning is sent to the owner via the app. 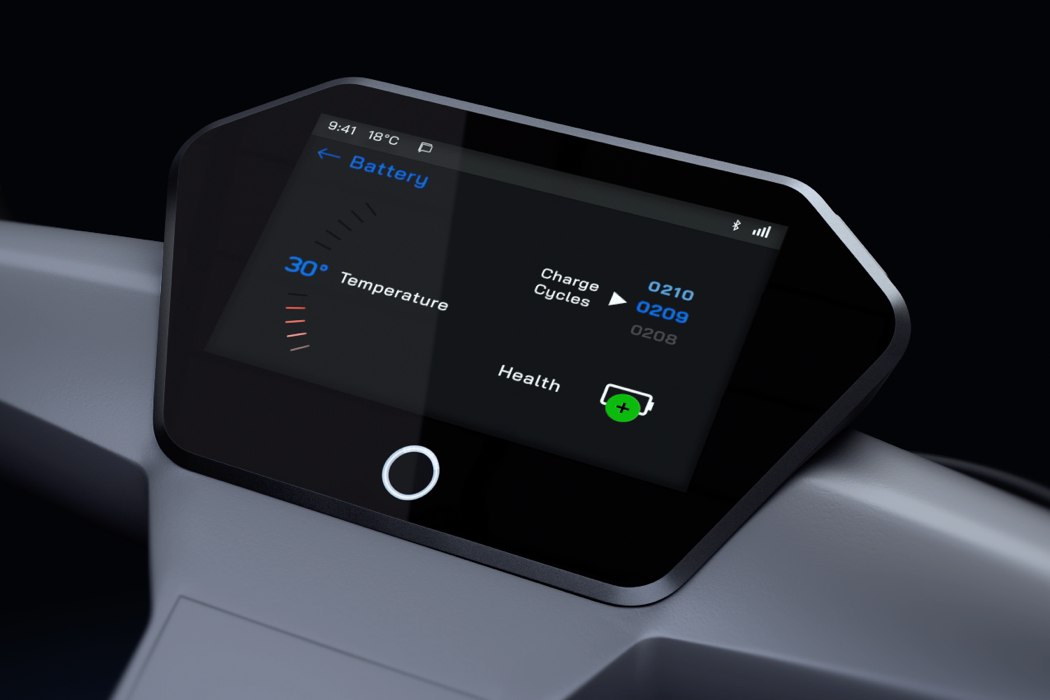 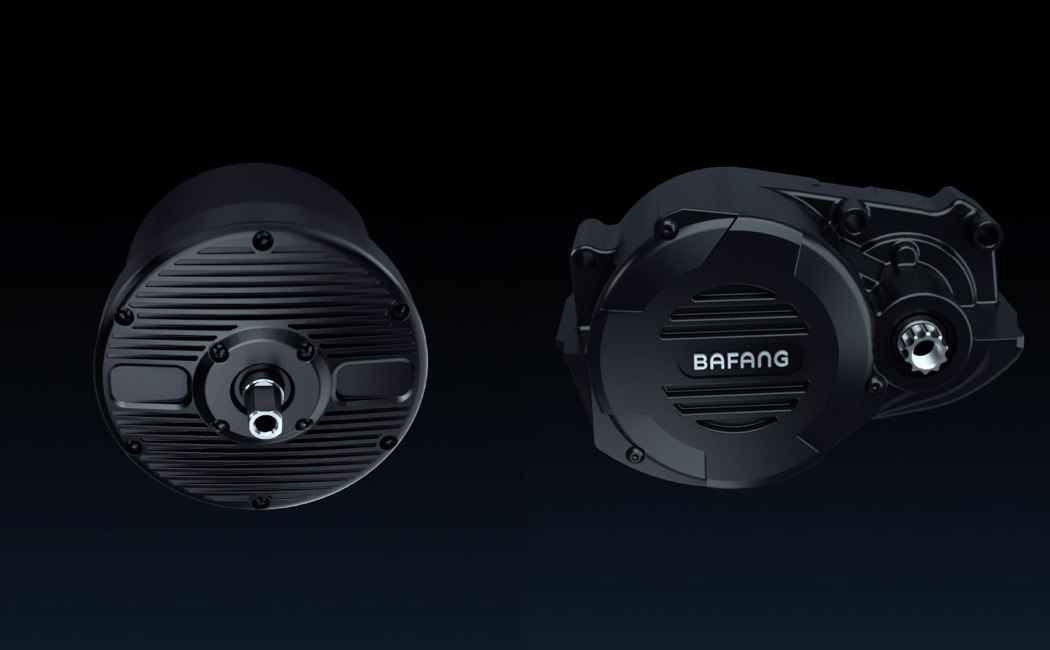 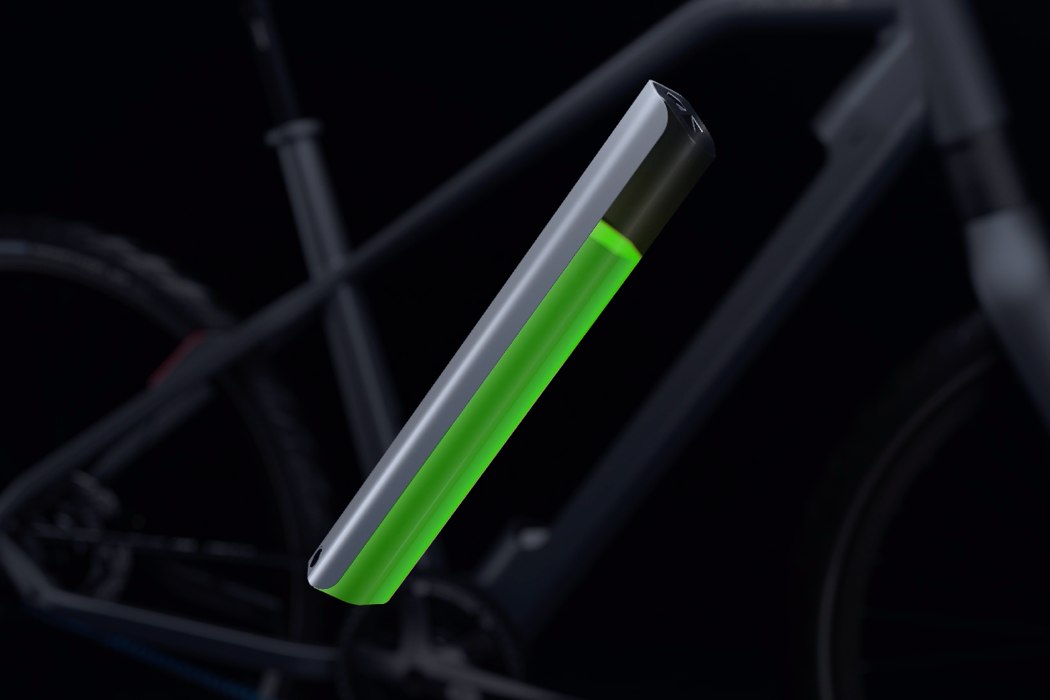 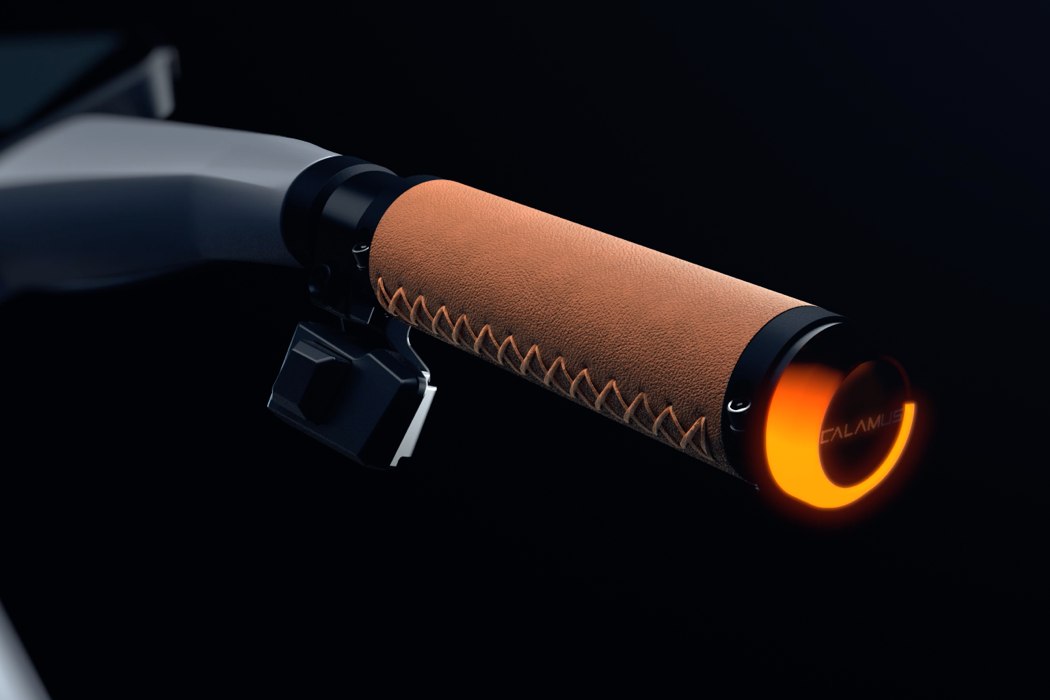 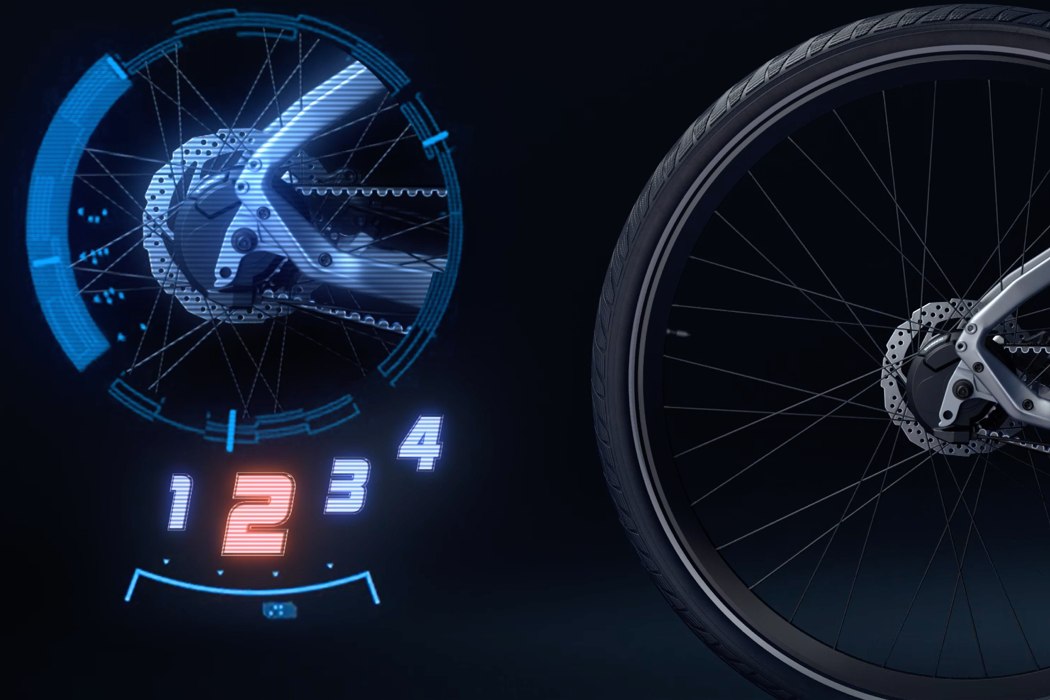 Auto gear-shifting based on riding pattern. 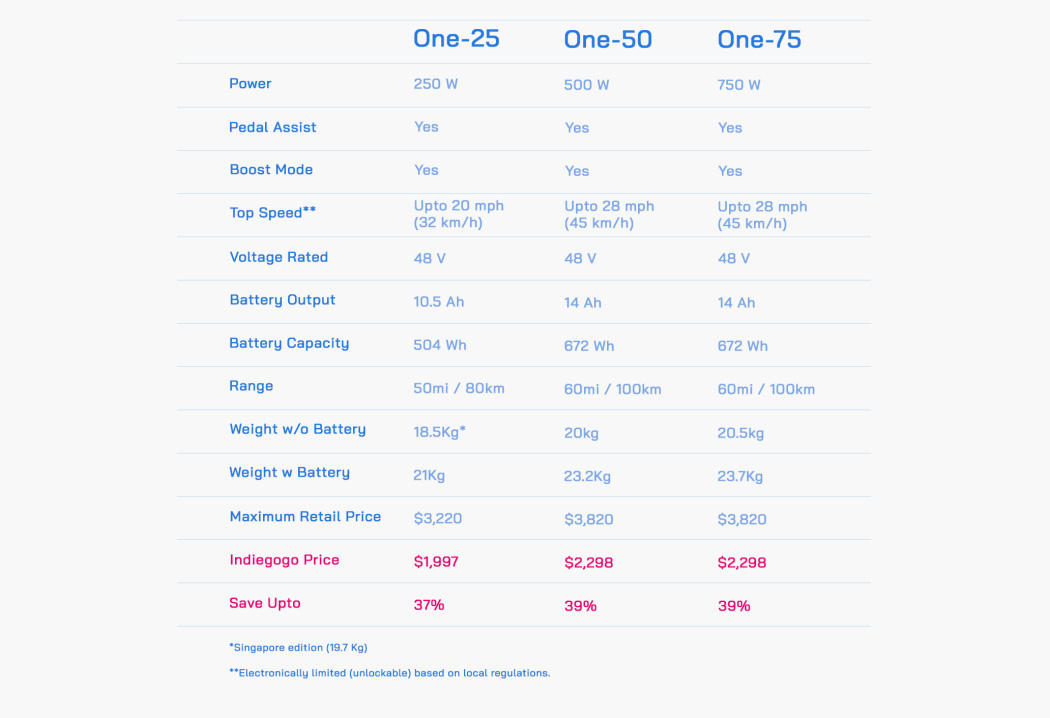 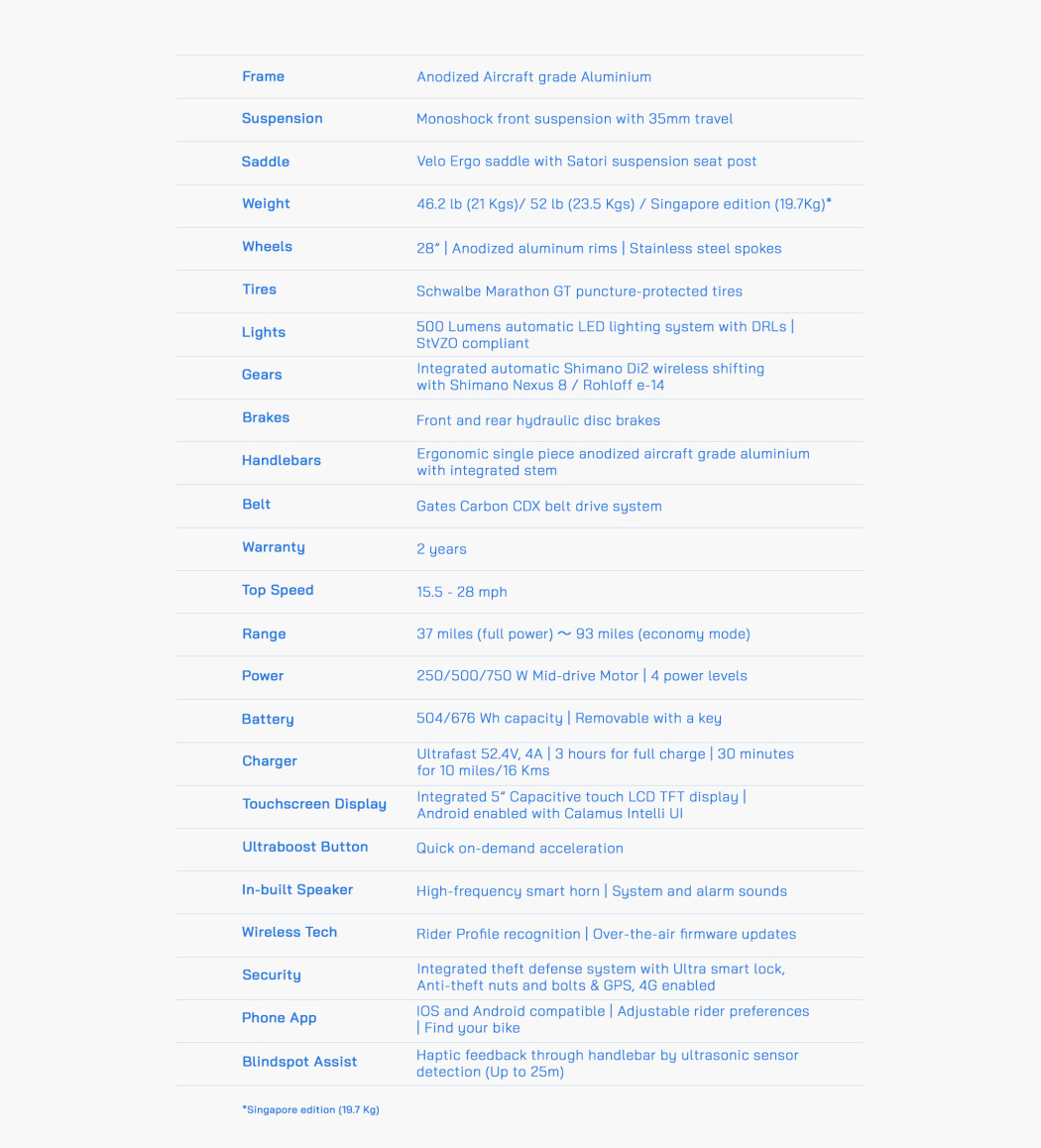 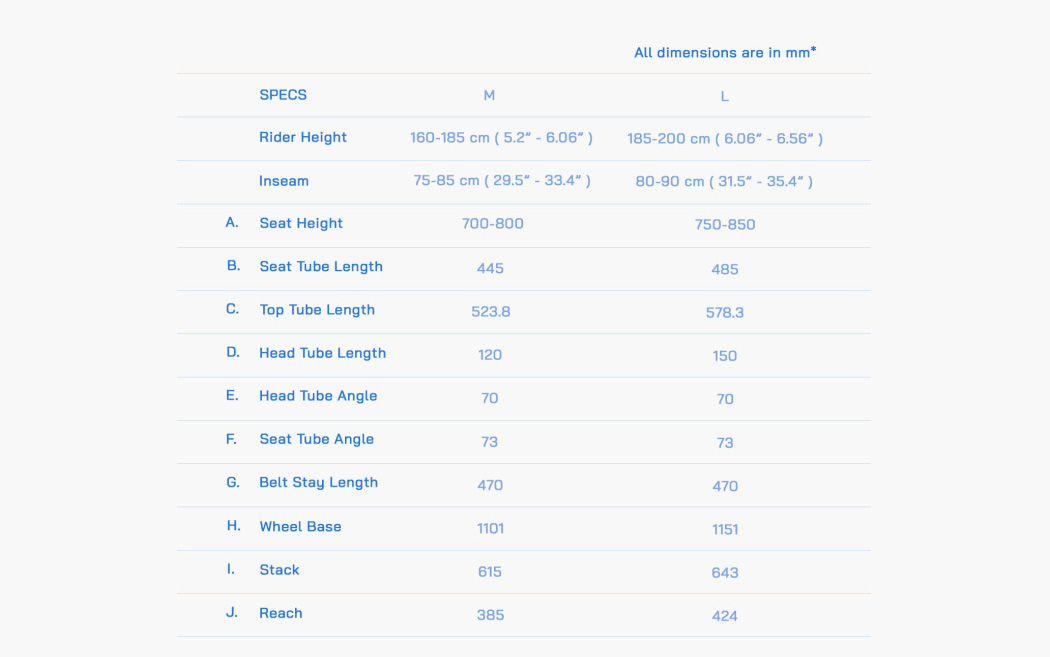 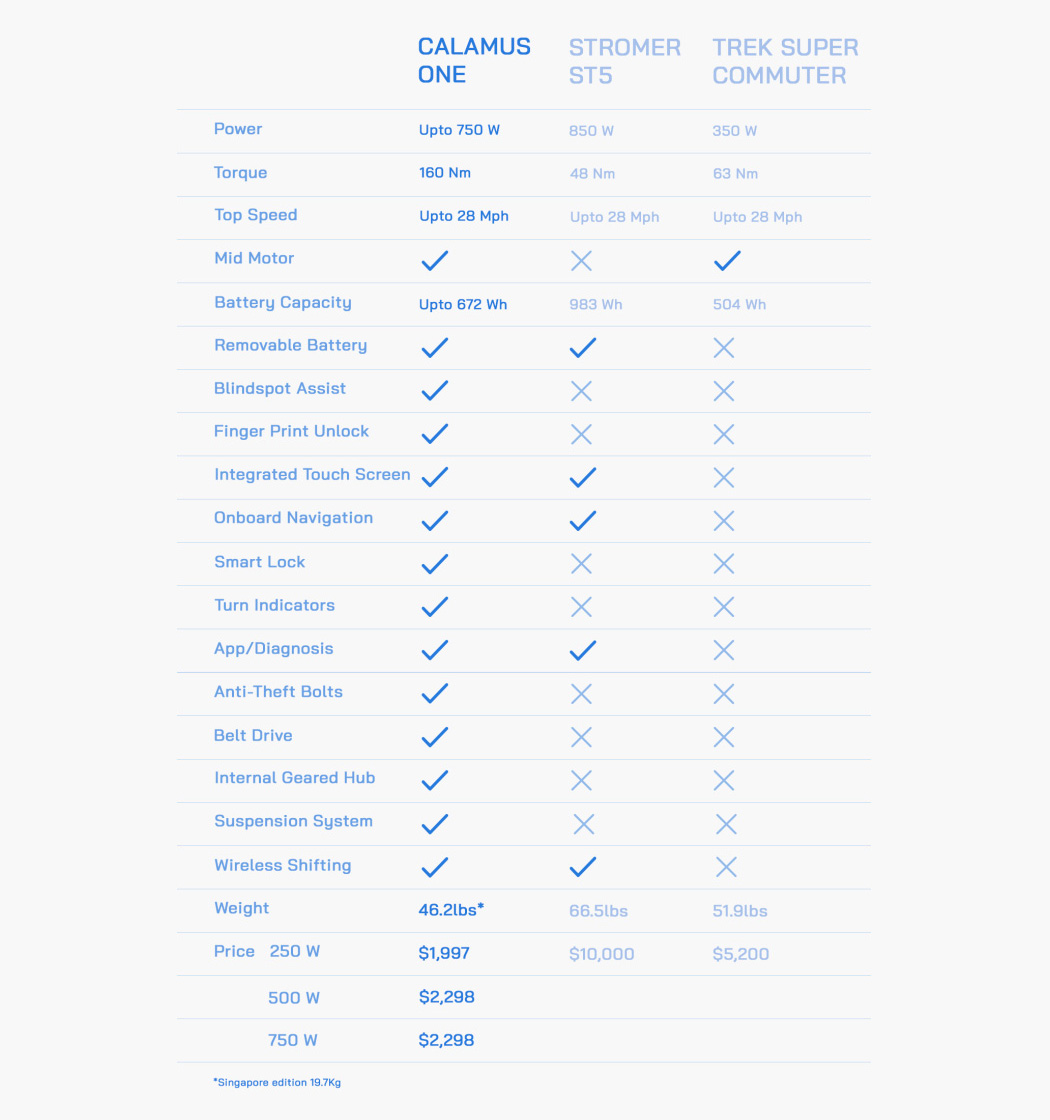 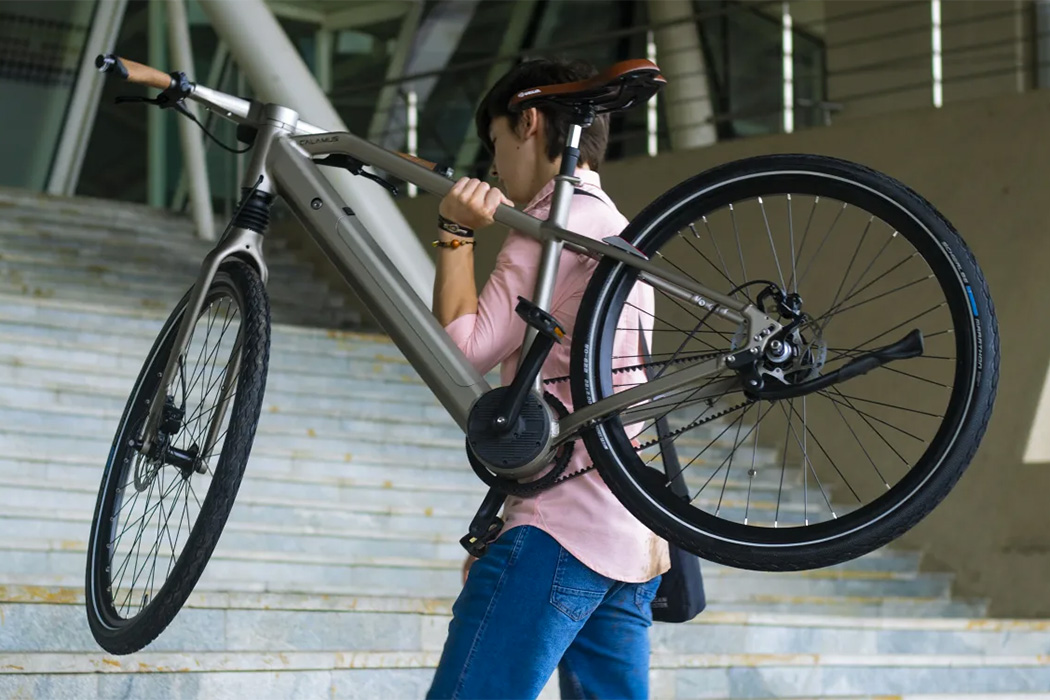 Apple isn’t in the collaborating business. It’s in the acquiring business. So most of Apple’s fans tend to lose out on some really interesting potential…

Inspired by the events of 9/11, designers Jiyoung Choi & Namsun Do created the Tinkerball as a life-saving device for a variety of emergency situations…

A trailer designed for the modern Nomad to meet their futuristic outdoor camping needs!

Modern lifestyle has created a new genre of digital nomads – people who love the outdoors while balancing their work/ tech life. After all, while…