TMPL pays tribute to a golden age of wrist-watches. Inspired by the fine technologies, design cues, and materials of an era gone by, TMPL’s watches are a salute to a long-gone past before brands, planned obsolescence, fast-scale manufacturing, and circuit boards were a thing. Watches made in the 1910s were truly cherished items, designed to last, especially given the nature of the times and the turmoil of war. Watches from 1910 were designed to represent the person wearing them, and were cherished generation after generation, often as a symbol of the person who handed them down. Watches were much more than time-telling devices a hundred years ago. They were storytelling devices too, and TMPL’s watches, made in the Nagano prefecture of Japan (arguably the Switzerland of the Orient), are possibly the greatest throwback to that era.

TMPL’s 1910s watch series show that design has the ability to age beautifully and that the aesthetics of over a hundred years ago can still look absolutely appealing. The watch comes in two variants, a Chronograph with 2 subdials, and a Small Second with a single subdial at the 6 o’clock position. Both watches sport a curved, circular 316L steel body with silver or gold plating, giving the watch its precious appeal. On the top sits a scratch-proof mineral glass, and below it, the watch’s classical retro-inspired design with beautiful, vintage-styled numbers coated with luminous paint, and azure blue hands that glow in the dark too. Under the watch’s face sit their movements… a Quartz Miyota movement in the Chronograph version, and a Quartz Seiko Epson in the Small Second variant, both built with magnetic resistance, a special feature that extends the longevity of the watch by making it resistant to magnets around you (they wreak havoc on the internal mechanics). Finally, on the side, the watches come with a stylized crown too, reminiscent of the watches of a bygone era. The Chronograph has two additional buttons to control the subdials.

Carrying the rich history of watches worn by people over a century ago, TMPL’s revival aims at being a history lesson on your wrist. Its classic, evergreen design hasn’t aged at all, from the time soldiers wore it in trenches, or in fighter planes, to now, over hundred years later. TMPL also in a way celebrates the 100 year anniversary of the wristwatch, when watchmaking technology compressed pocket-watches into a body small enough to be strapped on your wrist, allowing you to check the time while leaving both hands free! We’ve certainly come a long way, leaving behind a rich, glorious, yet elegantly simple past, and the TMPL watches are a reminder of that. 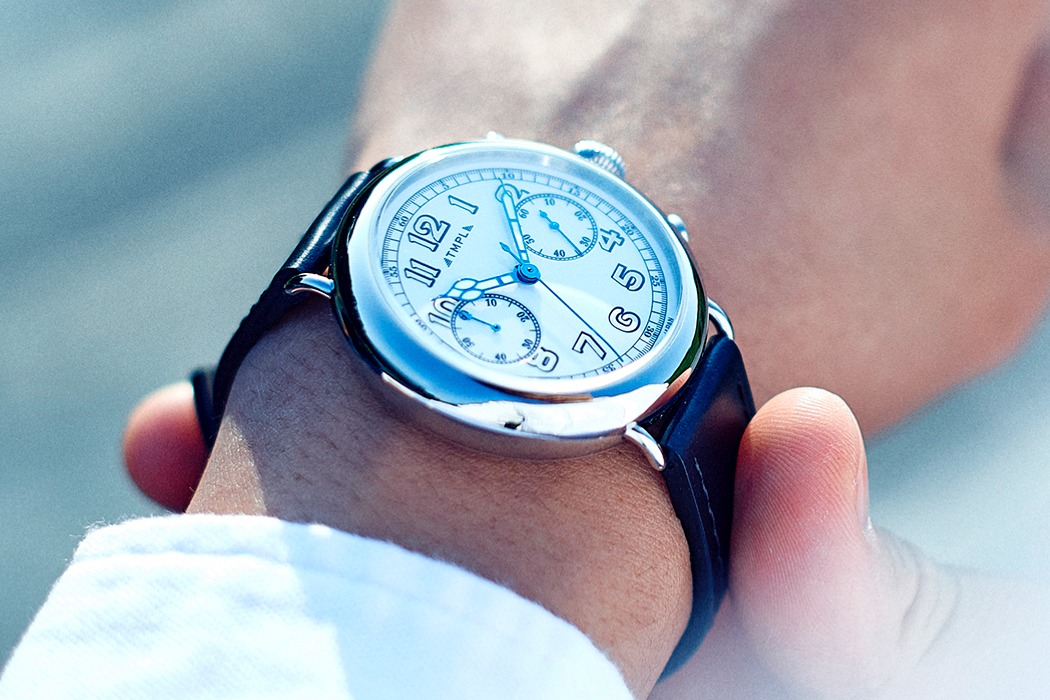 1910s watch designs have been revived, with promised creativity and quality by Japanese craftsmanship. TMPL is a new watch brand, a product created through the collaboration of Nagano (in Japan) Prefecture manufacturers, who have long been involved in the production and repair of watches, and product designers with modern sensibilities. 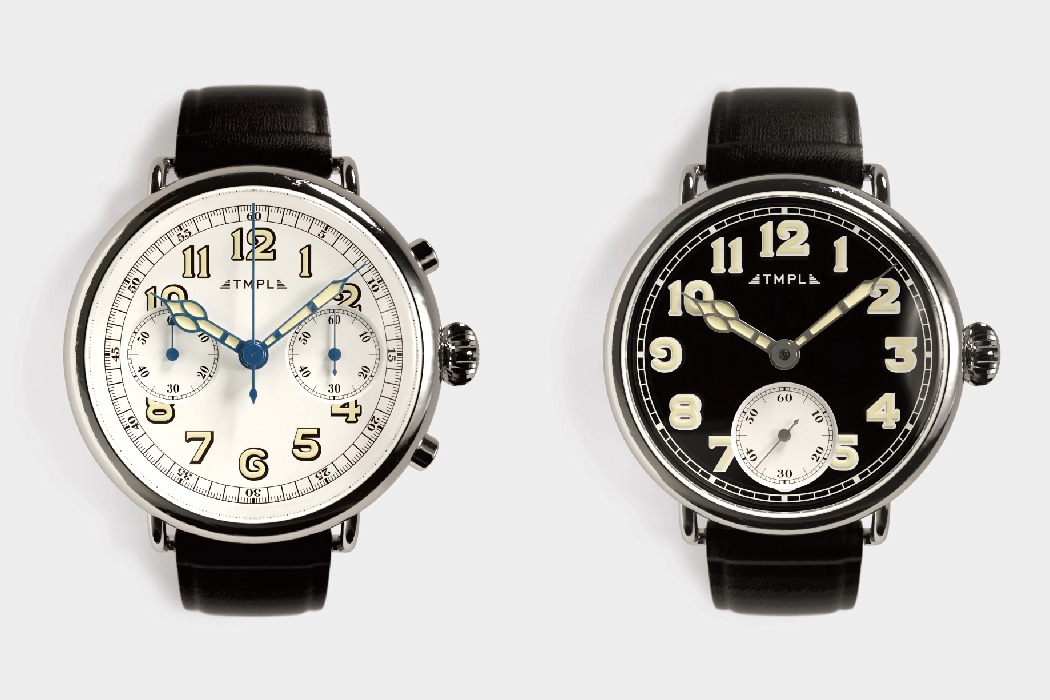 “Wear the age,” the brand concept of TMPL, tells that watches are not merely tools for checking the time, nor are they simply status symbols or means of self-expression. The makers believe that wearing a watch today gives the wearer knowledge about the path that the item known as a “watch” has traveled far through global history, while at the same time imparting value to the watch itself and pleasure to the wearer. 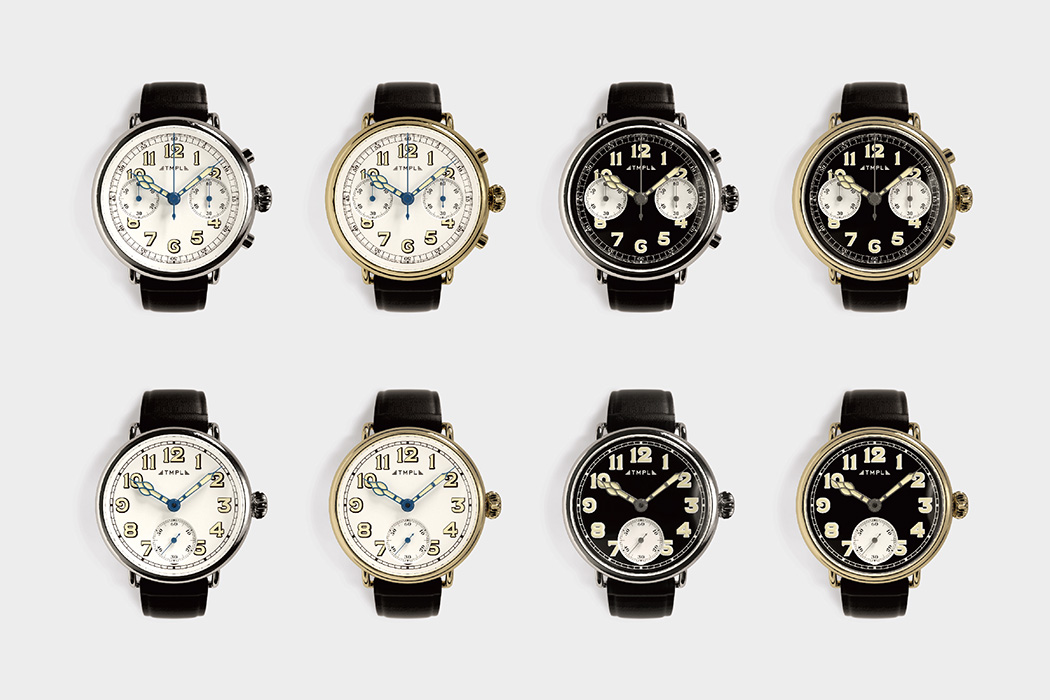 The essence of 1910s watch designs, realized in modern style. 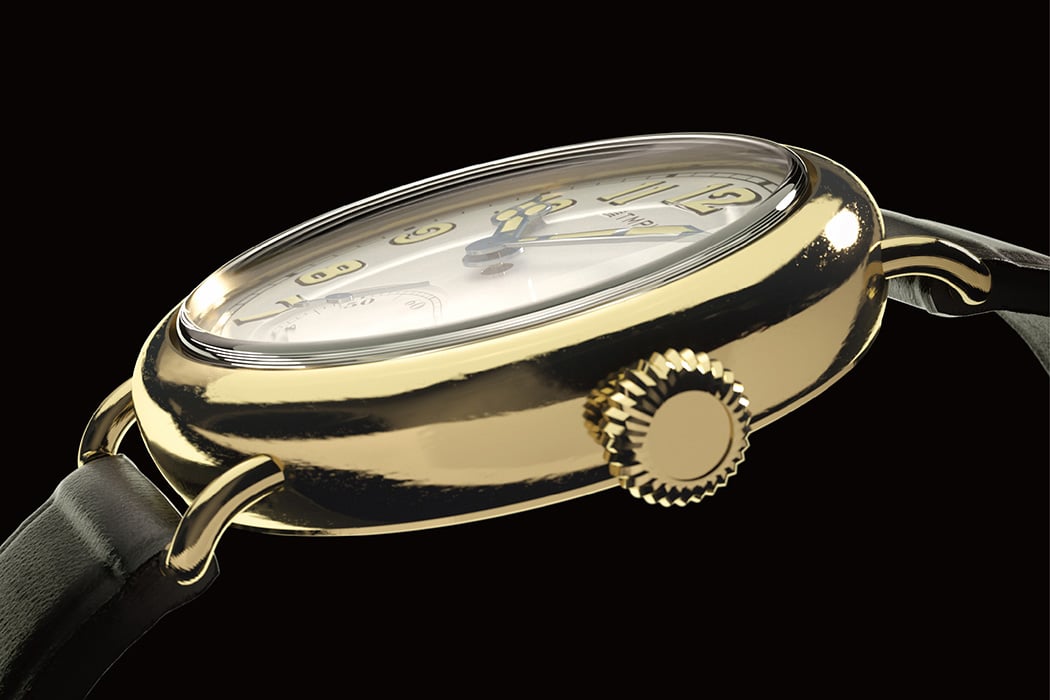 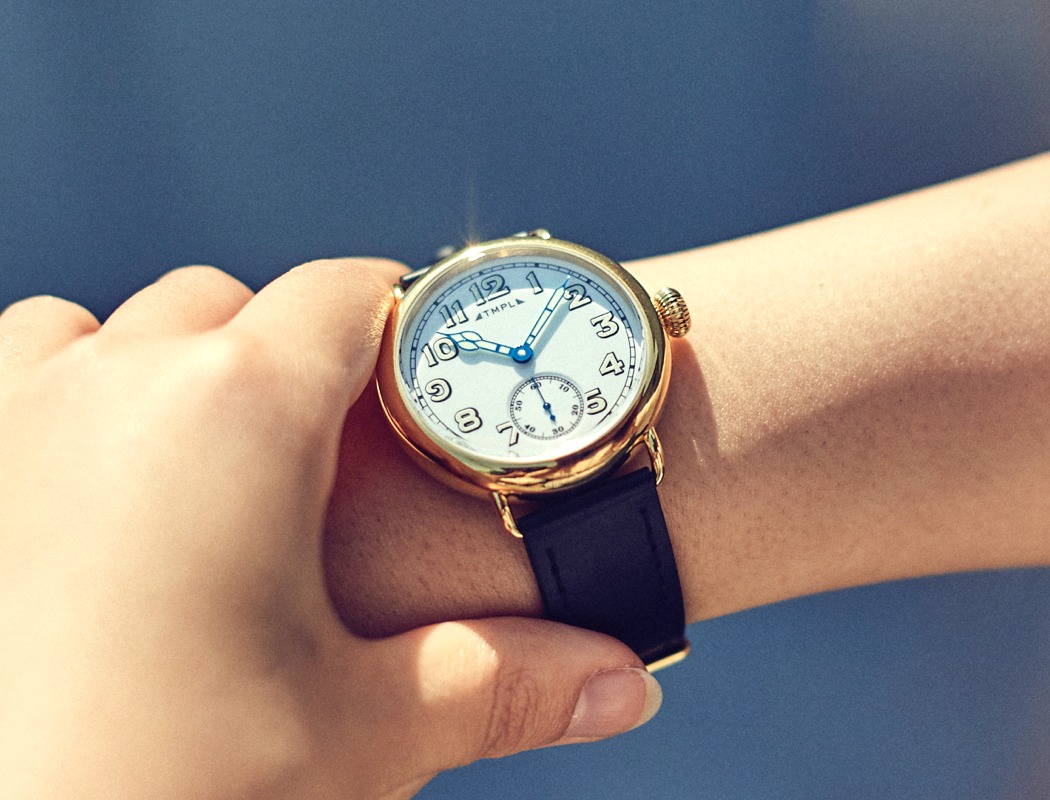 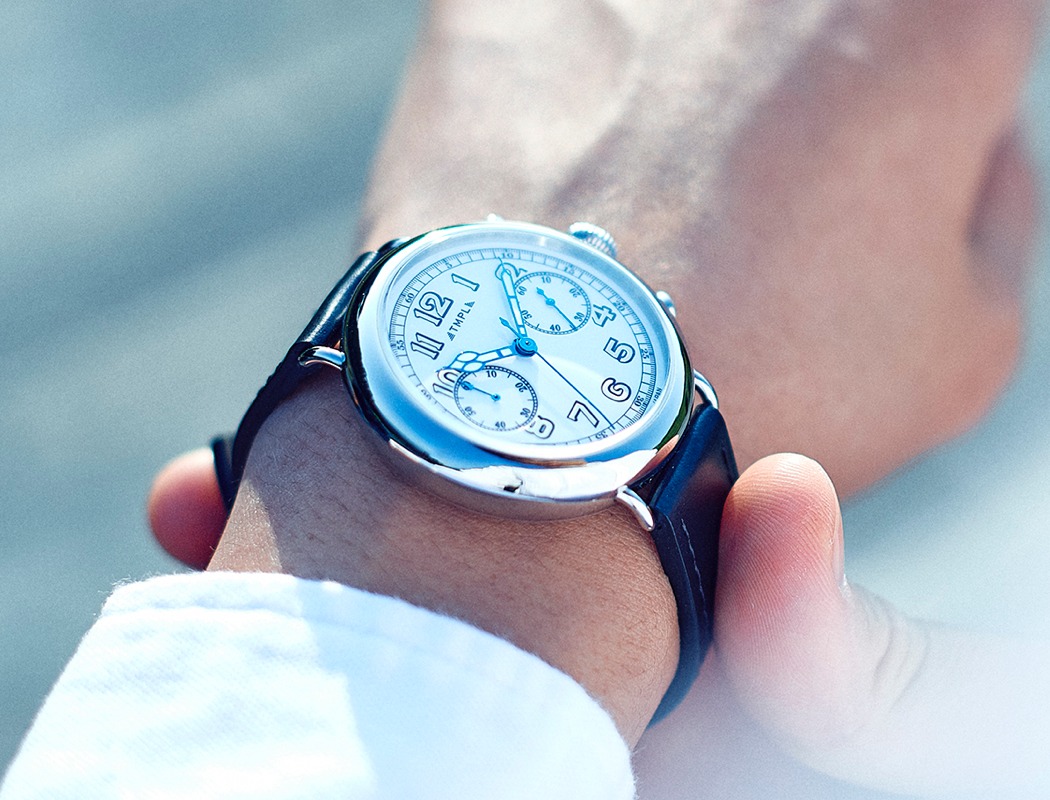 Both the 1910S-CG01 chronograph model and 1910S-SS01 small second model feature a universal design that is unisex. The product line-up includes a range of color variations with different case-and-dial combinations. Select your favorite combination from 100 years ago. 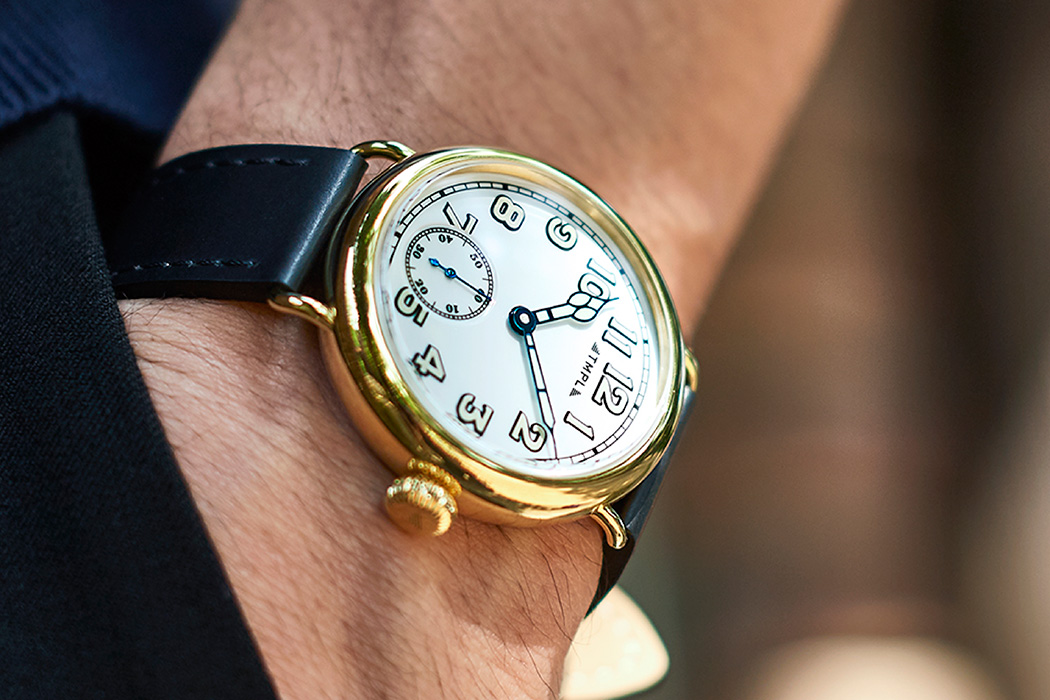 In the 1910s, the custom of attaching a watch to the wrist had not yet become ubiquitous. It is said that people began attaching watches to their wrists as a means of making the watches less noticeable, and the watch fashion at that times was small-sized watches incorporating movements used in women’s pocket watches. Born from the idea or attaching a belt to a pocket watch, these watches have round cases and large winding knobs in which traces of pocket watch styles can be sensed. Keeping with this form, we are creating watches with a contemporary size balance while creating a sense of 1910s atmosphere.

The watches host a porcelain dial (the main materials used in clock faces in the 1910s) exude a sense of charm. Another characteristic of these watches is the luminescent paint liberally covering the large Arabic numerals, a feature incorporated in consideration of visibility when the wearer is moving their arm, such as a pilot operating an aircraft. 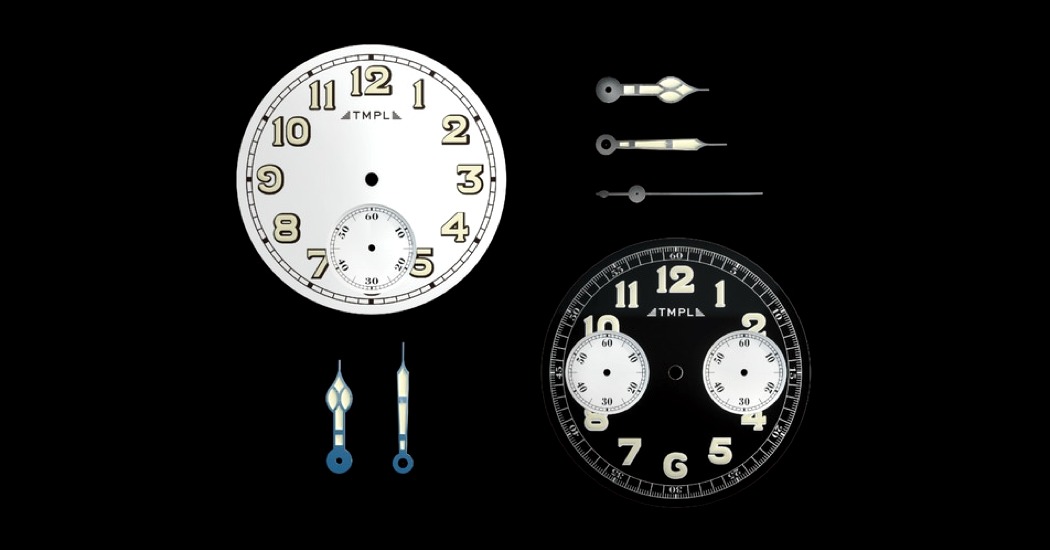 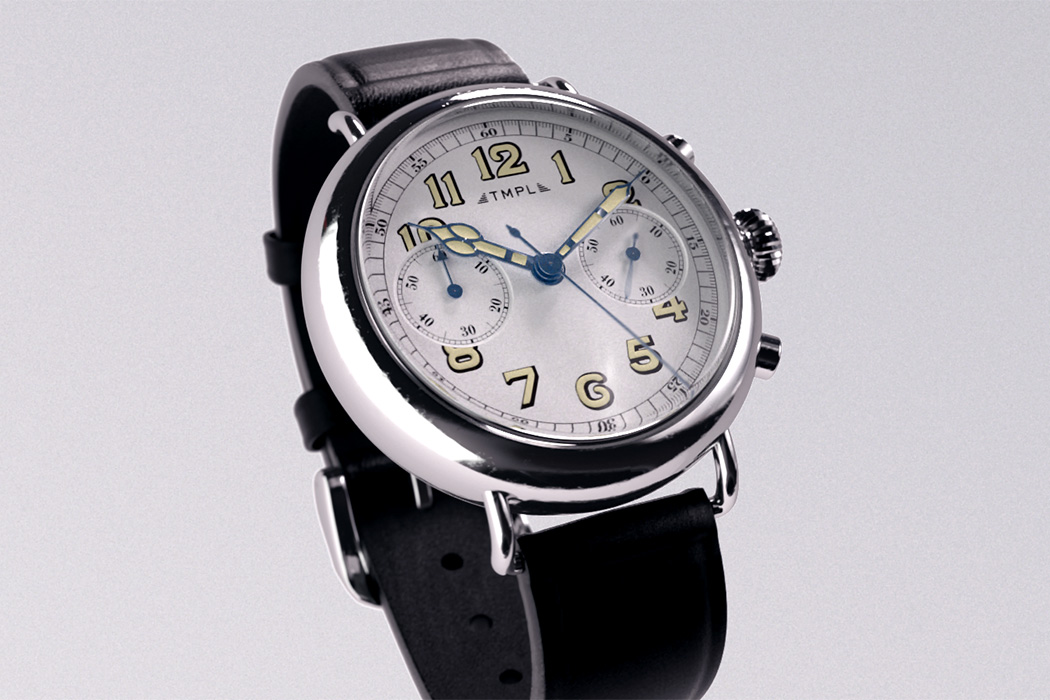 Modeled on the 1910s timepiece, the cobra hands (as they resemble a cobra’s head) are coated with Blue Luminescent Paint, to give it the required visibility in the dark. Most aircraft and military timepieces from this era hosted this feature. The blue color of the hands is a byproduct of the technique used in the 1910s that was used to prevent rusting whereby the iron was scorched and oxidized.

Under the case is a high-performance Japanese quartz that factors in features like usability, accuracy, design, and reasonable price.

People are regularly coming in contact with magnets in everyday life through use of devices like personal computers and smartphones, many problems and malfunctions are caused by magnets. Many timepieces brought to Tokeiya Fukkokudo for repair are due to the damaging effects of magnets. Accordingly, TMPL watches have a special structure to protect the movement from magnetic forces, giving them the antimagnetic functionality of MAGNETIC RESISTANT4800.

Below: The Watch Details 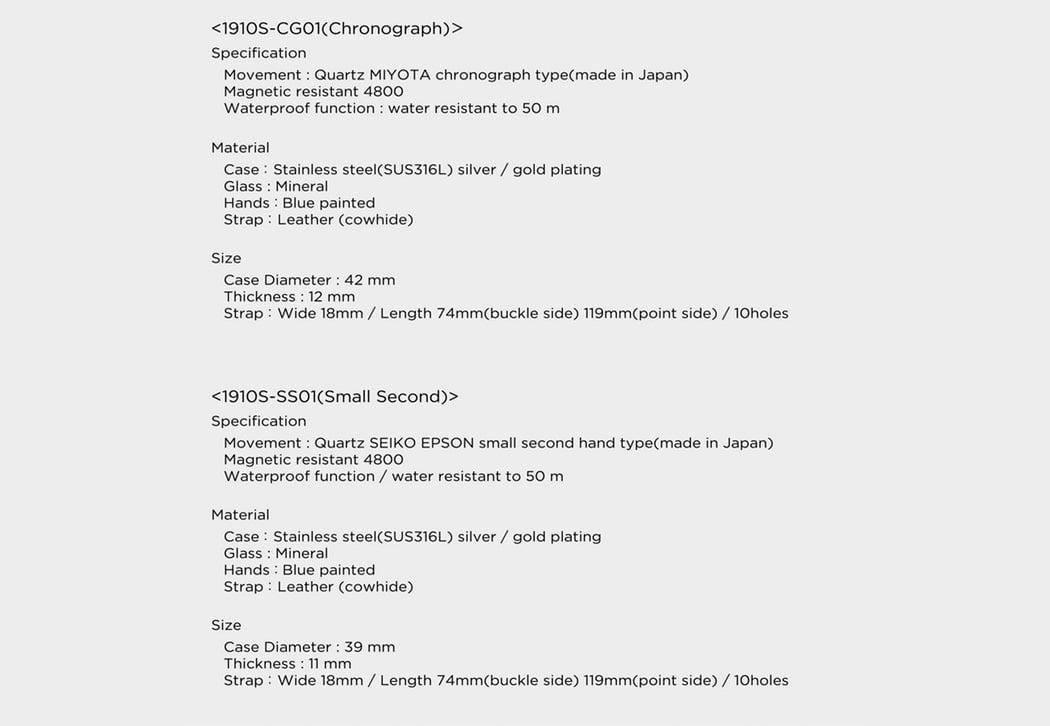 The 1910s was the era in which the First World War took place, seeing the use of wireless battle command transmissions for the first time in human history. In this historical context, the pocket watches that had been the mainstream watches up until then became inconvenient to use, leading to the birth of watches that enabled the wearer to quickly check the time while leaving both hands free, and these watches gradually spread into general use.

Features like the distinctive round form, dial designs, and winding knob shapes seen in watches from this era also show traces of the pocket watches that had previously been the mainstream. 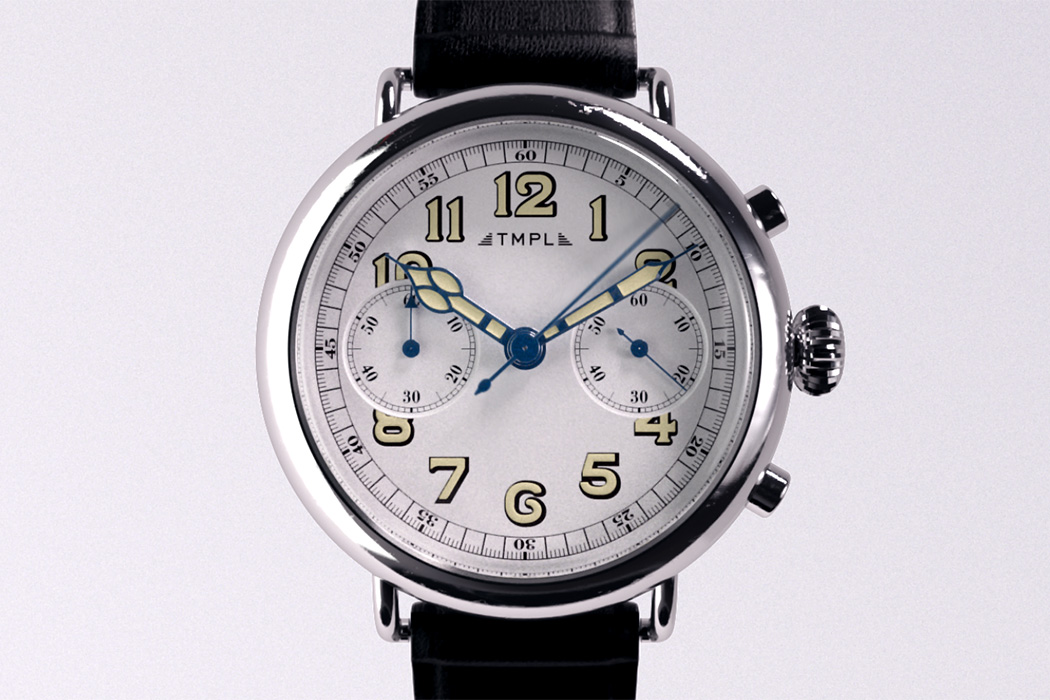 – All this is possible thanks to the technology and craftsmanship of Nanan Seiko Co., Ltd., which has been involved in the production of ultra-precision devices over many years in the watch-making region of Nagano.

– In order to manufacture and repair watches, both precise cutting-edge technology for processing parts and the meticulous handwork of craftsmen are essential.

– As a manufacturer of ultra-precision devices and precision parts, Nanan Seiko Co., Ltd. has over 30 years of experience in processing and assembling not only watches, but also tiny delicate parts smaller than a grain of rice that are used in automobile and electronic equipment parts.

– TMPL watches are produced based on this track record for performance and reliability. 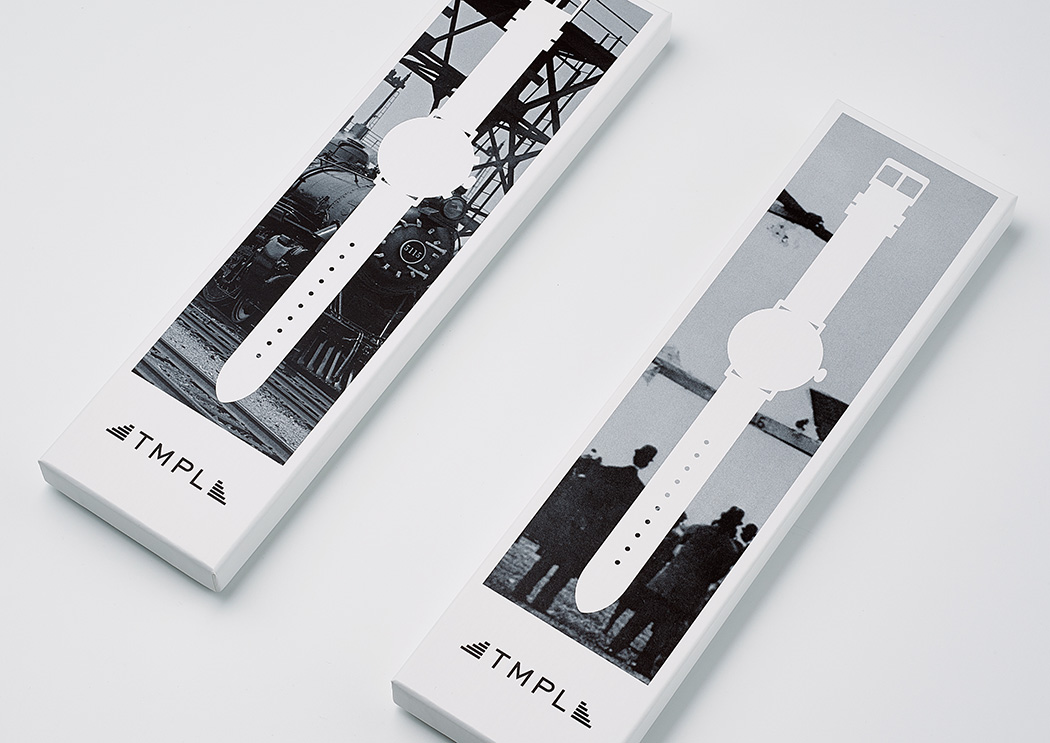 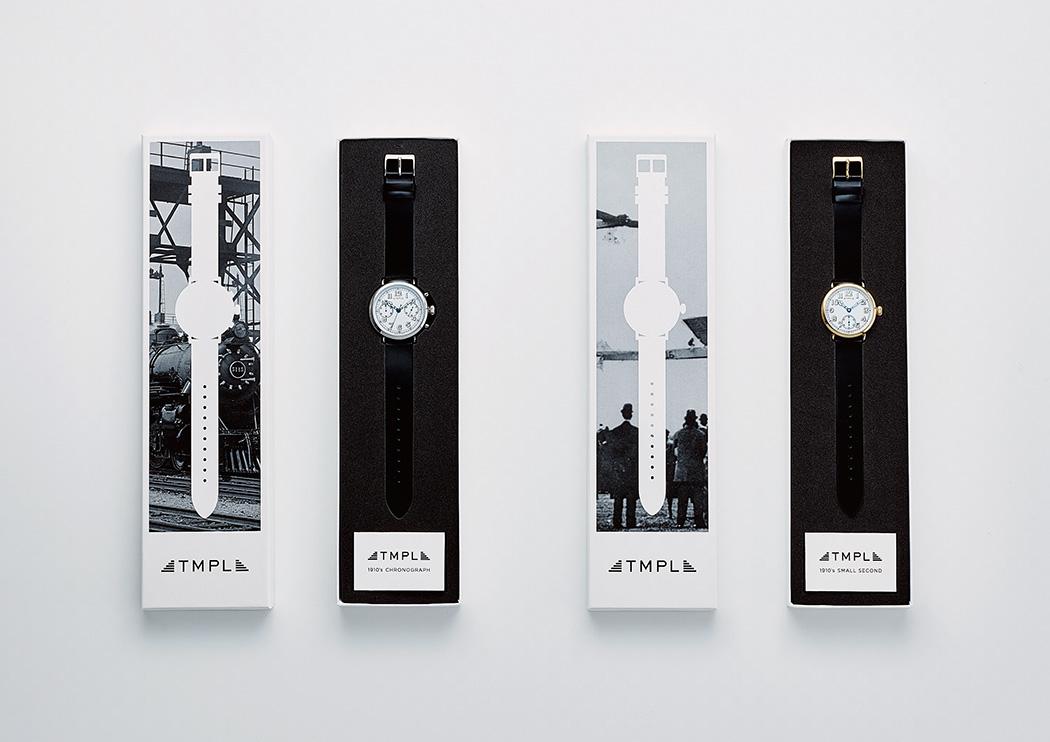 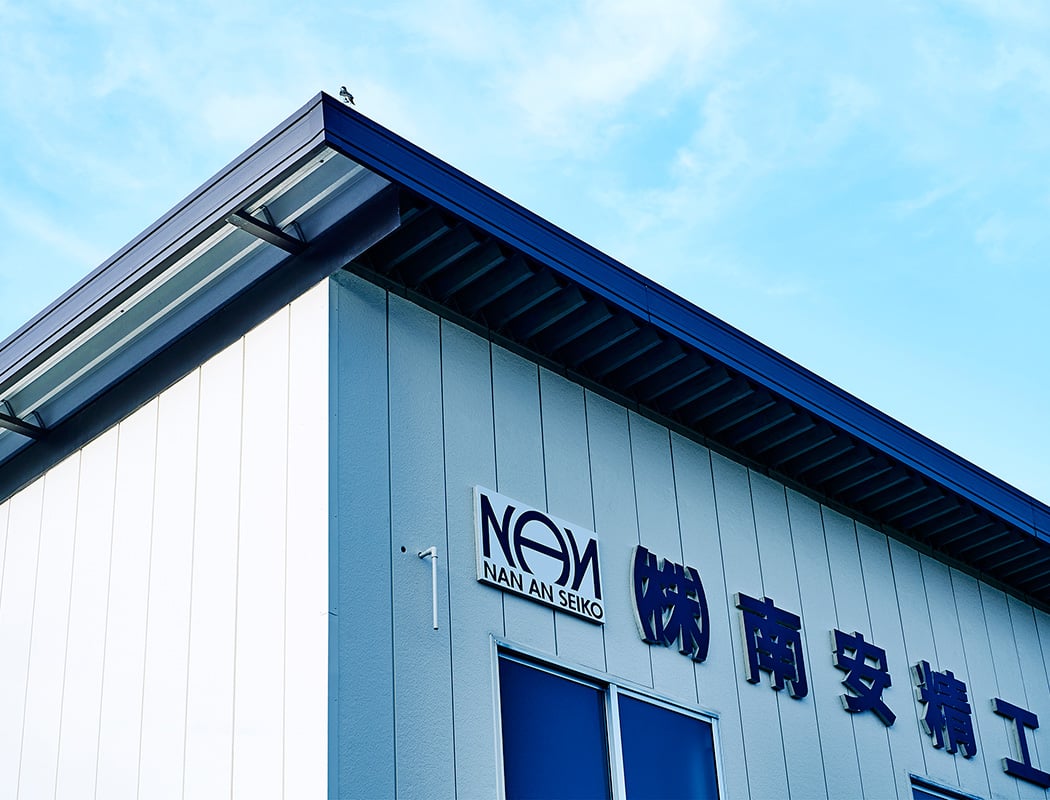 Legacy Behind The Watches

In their desire to pass down to future generations the watch-making craftsmanship and experience that has been cultivated in Nagano of Japan over generations, ensuring that the soul of the industry is preserved, a joint project was launched between watch manufacturer Nanan Seiko Co., Ltd. and product designer Creative Association: CEKAI.

At the core of this project lies the stance of paying tribute to the path of history traveled by watches and the people who have been involved with watches also this journey. 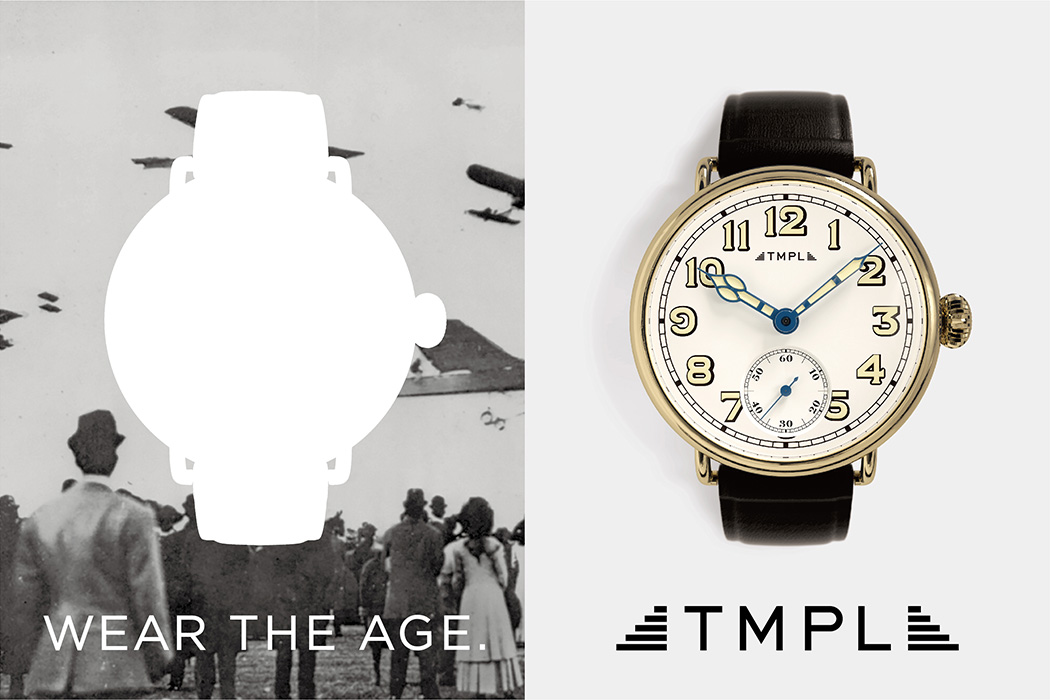 “TMPL” derives from the English word “temple”. This name was chosen out of our desire to create a place where people who respect and love watches’ long history and the achievements of those who have shaped this history can gather. 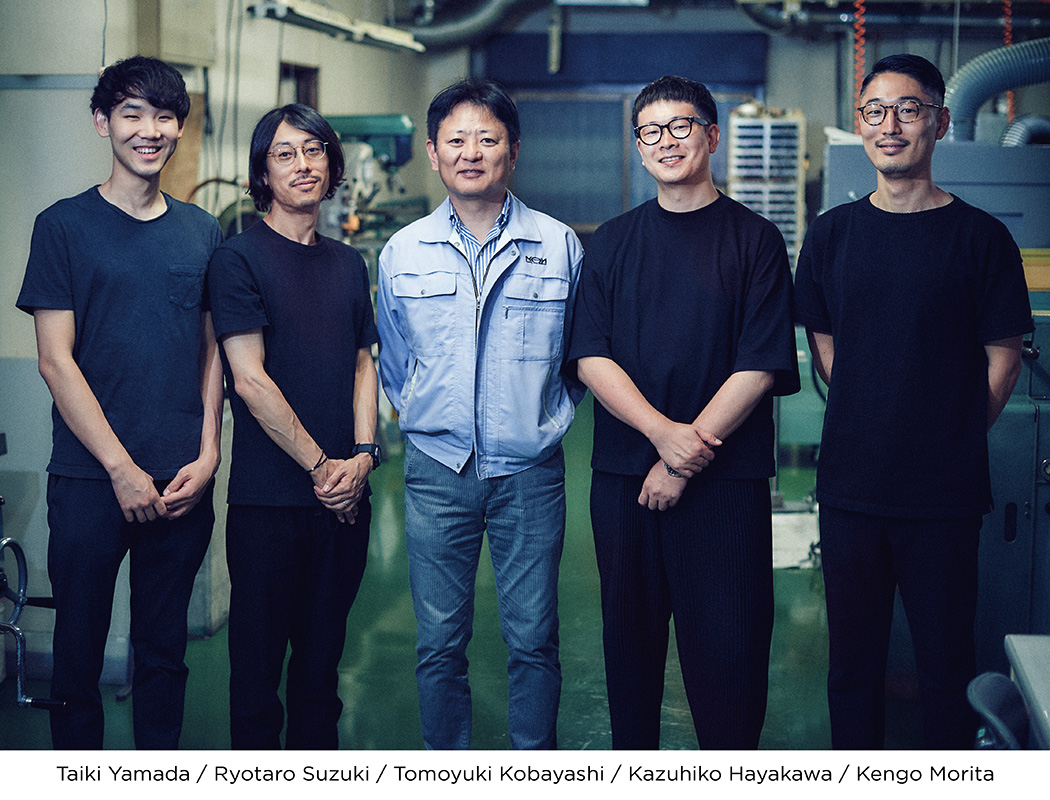 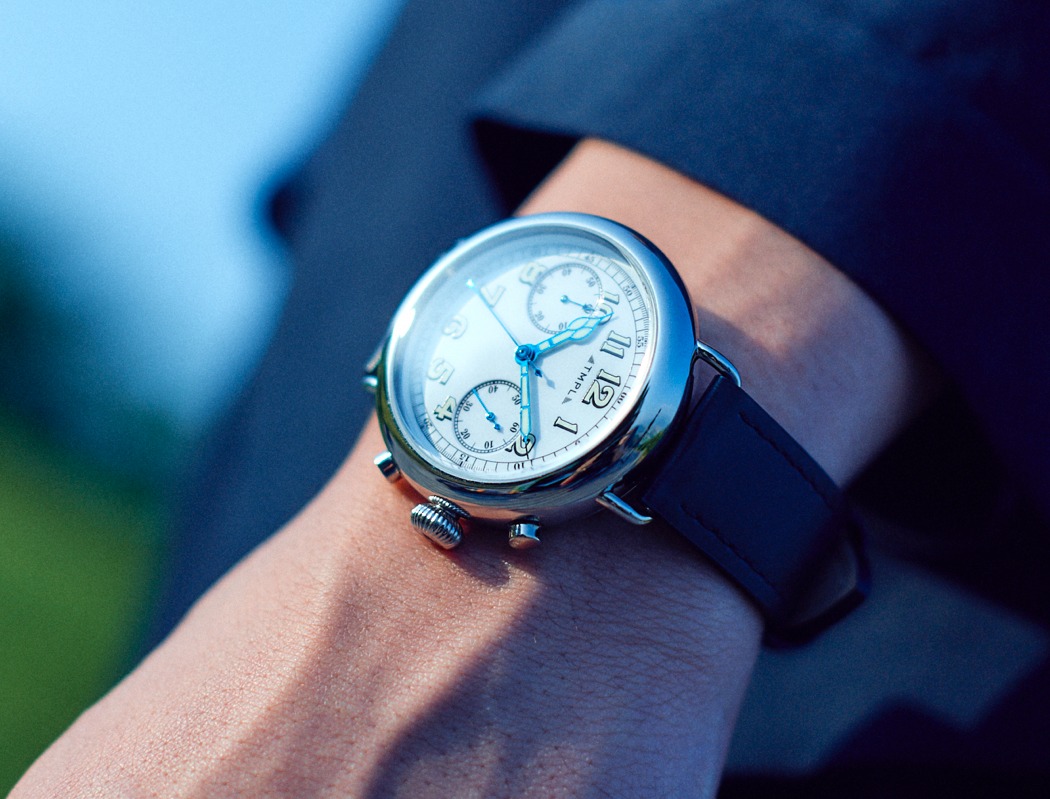 A Google assisted 4K window display that transports you to any destination of your choice!

“Our window is a magic frame, with pictures never twice the same” – Eleanor Hammond. Before televisions crept into our lives, windows were where we…

Augmented Reality for All

Swift Creatives looks to take full ownership of the augmented reality space with the development of 4 distinct products and applications for everyday use. The…

Everyone’s favorite ice age creature is the focus of this sauna by AtelierForte. The last in a series of huge animalian sculptures that aim to…