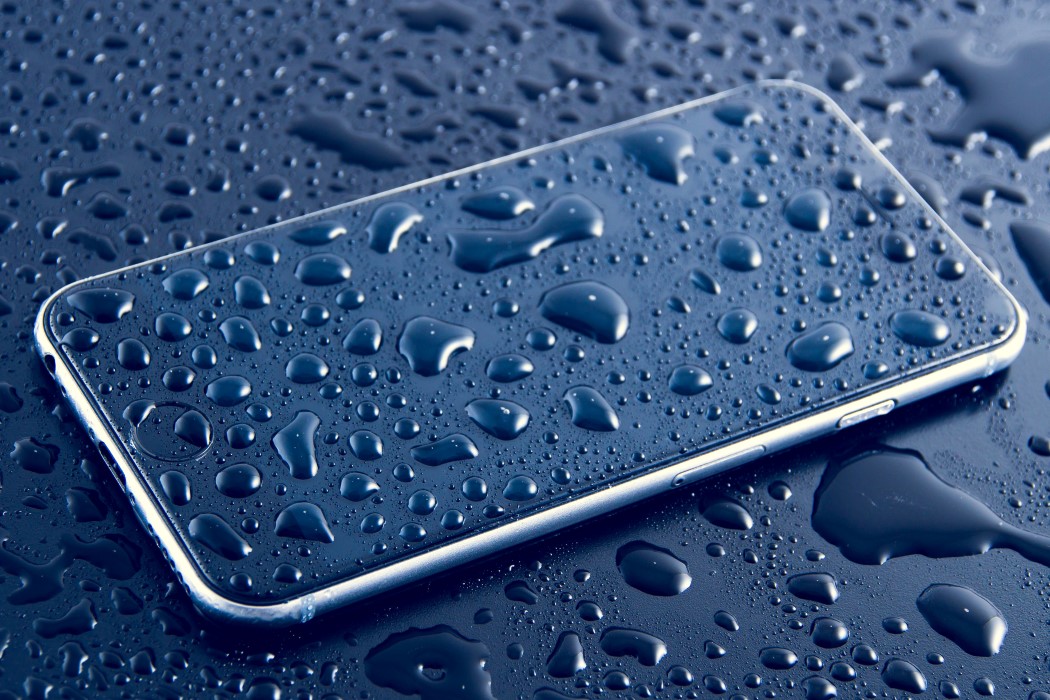 The IP rating is pretty much a standard part of every modern-day gadget’s feature list. It’s also the detail that one usually skims through to get to more important details like battery life, internal memory, warranty period, etc. We’ve thrown around IP ratings too, without really delving into the details much, so this article will help clear any doubts you may have regarding your gadget, how waterproof it is (or if it is even waterproof), and will give you the low-down on how the IP rating is just a standard, and you maybe shouldn’t throw your phone into the swimming pool just because your manufacturer said it’s water-resistant.

A BRIEF LOOK AT THE IP (INTERNATIONAL PROTECTION) RATING

The IP is one of many standards adopted to indicate how physically secure a product is. Not to be confused with the IP which stands for intellectual property, the International Protection (or even sometimes referred to as Ingress Protection) Rating refers to how protected a device is against solids and liquids. It’s found usually everywhere, from sockets to street-lamps, and helps designers, engineers, technicians, and others understand whether A. a product is immune to tampering, B. immune to dirt and dust, C. resistant to small amounts of water, or D. resistant to large amounts of water, or water under extremely high pressure/temperature. The IP ratings are broken up into two units. One unit is reserved for solid-matter-ingress, while the other is indicative of resistance to water ingress. Let’s ‘dive’ in! 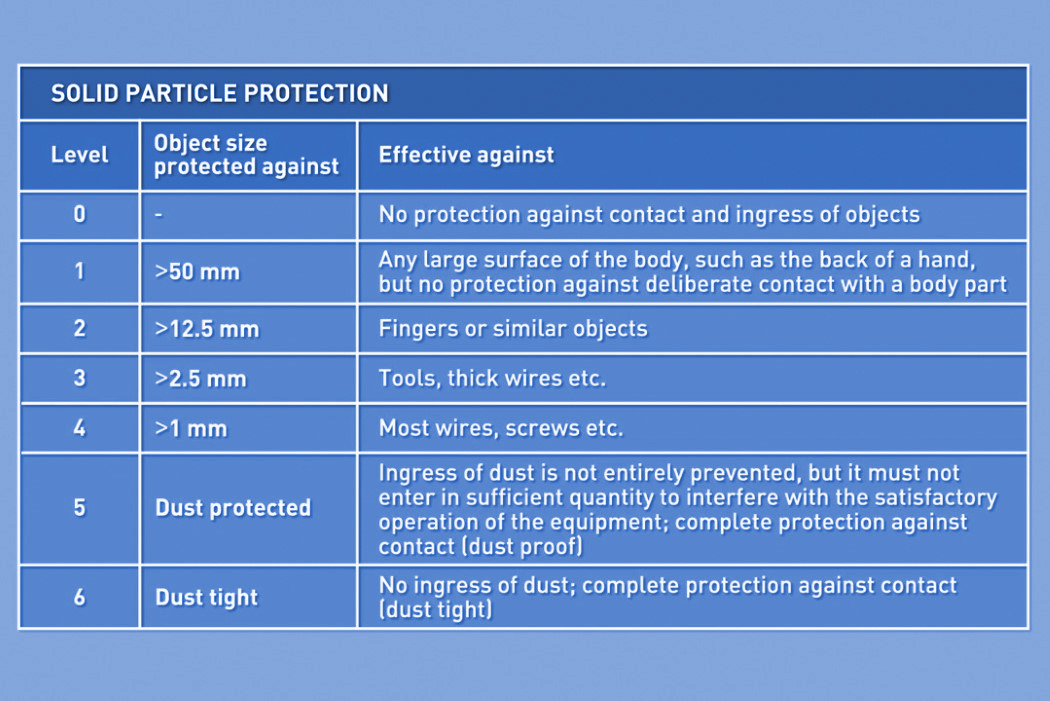 If you’ve ever taken a look at a phone’s IP rating, especially in the recent future, you’ll notice that it often reads as IP67, or IP68. There’s a general tendency to say “IP sixty-eight”, but it’s worth noting that those two numbers are two completely different ratings (and the right way of saying it is “IP six-eight”, in case you’d like to correct your geek friend the next time). The first number, i.e. six, forms the first rating, indicating a product’s resistance to solid matter. The chart for measuring IP ratings for solid ingress starts at 0, or basically no protection (something you could possibly shove a wrench or your hand into), and ends at 6, which is the international standard for dust-proof, or completely protected against dust. It’s safe to say that the latest phones have a rating of 6 on the solid-ingress scale, which means their insides are impervious to sand, dust, or any particulate matter (even the charging port or the earpiece is secured)… but if you’ve just bought yourself an Oppo Find X, or a phone with a sliding selfie camera (like the rumored OnePlus 7, there’s a heavy chance of it not being dust-proof, given the introduction of moving parts and complex mechanisms.

However, I’d take advice from YouTuber JerryRigEverything who said that even though phones are tested to be dust-proof, they aren’t entirely dust-proof. Earpieces or speakers are usually made of moderately powerful magnets which may attract tiny metal particles that can, over time, damage your phone. All in all, a casual drop at the beach won’t harm your phone, but do think twice before docking your phone in a hole made in the sand. 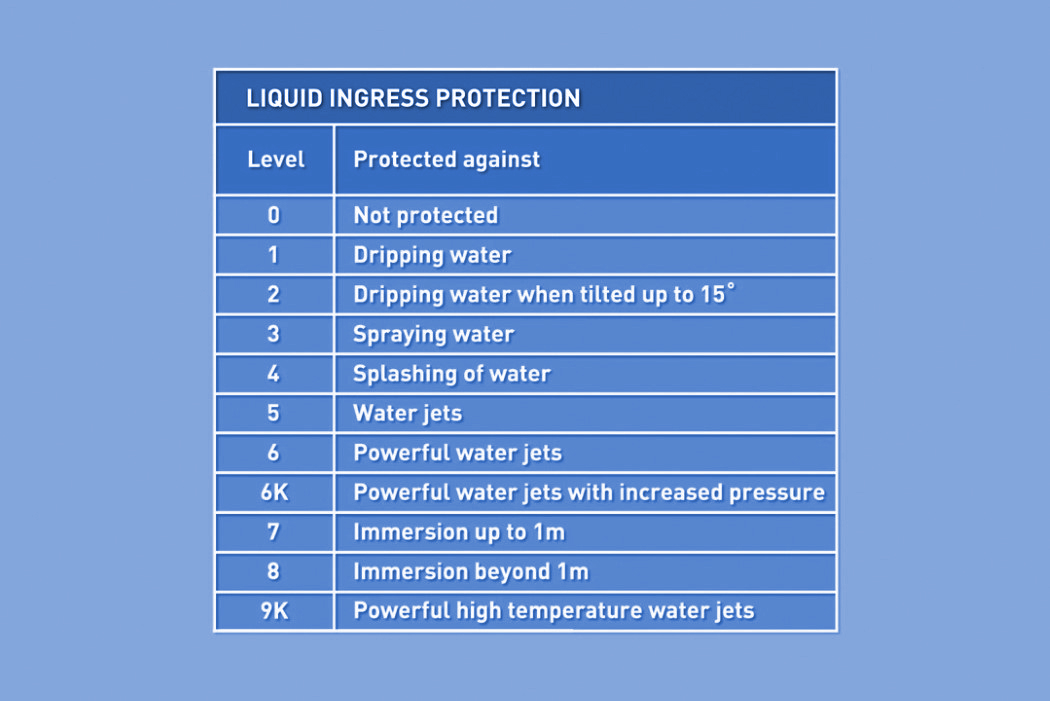 The second digit in the IP rating stands for resistance to water. The chart’s slightly longer in this one, going from 0 (which basically means it has absolutely no protection against water) to a stunning 9K, which allows products with the rating to withstand high-temperature water-jets. Needless to say, the phone in your pocket isn’t designed to ever witness a scenario where it would be bombarded by high-temperature water jets, so the 9K rating is usually reserved for products that need that level of protection. Phones usually fall within the 7-8 rating, which basically states that it’s been tested for immersion up to or beyond 1 meter of water.

Probably the biggest takeaway from this rating is the fact that it’s always referred to as a water rating. Tests for the liquid ingress rating are always done with freshwater, and the rating applies to tests with water that isn’t contaminated or contains solvents in it. The liquid ingress rating isn’t limited to items like beverages, chlorinated water, or even salty seawater. These liquids have the ability to corrode any sort of metal over time, and your smartphone isn’t any different. Salt and electronics are an exceptionally bad combination, so regardless of your IP rating, it’s best if you didn’t carry your phone into the ocean… or at least used a water-proof casing.

The liquid IP rating isn’t infallible in that regard. Note that even though gadgets may come with IP ratings, manufacturers may specifically mention that water damage isn’t covered under a warranty, because the liquid IP rating is, for the lack of a better term, ‘murky’. For starters, phones (or other gadgets) aren’t completely water-resistant. With prolonged use, accidental drops, or usage in fluctuating temperatures, a phone’s ability to withstand liquid ingress often gets compromised. In fact, most smartphones also make it a point to mention that their phones can stay underwater for a specific time frame (10 minutes or so). This isn’t a feature as much as it’s a precautionary measure, for if you accidentally drop your phone into the pool (or let’s face it, the toilet), and it takes you time to retrieve your gadget. Smartphones are often equipped with water-sensitive stickers on the inside too, which will let technicians or manufacturers know if your phone’s been exposed to water, so even though your phone does come with an IP68 rating, it’s best if you didn’t jump into the pool with it (as most YouTube reviewers will agree).

If you happen to own a gadget with a rating that reads IPX7 or IPX8, don’t panic! The X basically means the manufacturers haven’t performed the solid-ingress rating because they didn’t deem it necessary. Besides, for a lot of products, if the device is protected against liquids, there’s a fair chance it’s protected against solids too. Take the Apple Watch with its IPX7 rating. It essentially means the watch was rigorously tested for water-resistance, given that it’s going to come in contact with tap-water, shower-water, sweat, or pool-water a bunch of times every day. The Watch’s rating makers perfect sense because its enclosed, waterproof design means it doesn’t need to worry about dust as much… or maybe the fact that dust-ingress, if any, is covered under warranty, if it does happen to damage the Watch. A closer look at the warranty information would probably help.

WAIT, MY PRODUCT DOESN’T HAVE AN IP RATING

The IP Rating is an internationally accepted standard, but it isn’t a mandatory one. Most countries have their own standards that they adhere to for testing purposes, and the only reason they haven’t provided an IP rating is because they haven’t performed the tests according to the IP Standard. Take the GoPro’s waterproof case for instance, a product that was literally designed to hermetically protect the GoPro from contact with water. The case doesn’t particularly come with an IP rating, but needless to say, it does a pretty remarkable job of protecting the camera from water.

It’s important to know that the IP rating isn’t a guarantee. It’s just a test, like any other durability test, that indicates whether a gadget can withstand dust or liquid immersion. Phones with IP68 waterproof ratings have still been known to have problems after being dunked into a pool, and smartphone manufacturers will often make it a point to mention if their gadgets are covered under the warranty in case of liquid damage. Just like even though there’s no guarantee that your phone won’t shatter if you put a screen-protector on it, there’s no particular guarantee that it won’t get ruined if it comes in contact with water. Your phone, watch, tablet, earpiece’s ability to withstand water or dust depends on a lot of things. Usage, temperature, pressure, and ultimately even build quality (which could just be shoddy if you’re unlucky). Knowing the IP rating of your device is great, probably because you’ll know whether you need to be extra cautious or not… but knowing that electronics and dust, dirt, oil, or water are not friends is probably the greatest piece of wisdom to have!

With 7 modules to choose from, the Tego Adventure Kit lets you slide on, slide off, interchange, and rearrange your travel kit to build exactly…

Honestly, how many of you read about me at Unplggd, when they featured my desk? In retrospect, I am so ashamed of all the wires…

They say that if you spend 10,000 hours practicing something, you can perfect it. That’s all that comes to mind when I look at Taiwanese…

CollapseMini is a totally-wireless, all-in-1 docking station/speaker/table for all Android phones. No controls, connector, or power button…. and more importantly no annoying configurations! Simply place…