As the world of mainstream consumer electronics has made a casual, 2-year transition into wireless audio after killing the jack, it seems odd that Nintendo’s Switch, one of the most advanced handheld gaming consoles, capable of sheer versatility courtesy their Labo kits, isn’t compatible with wireless audio. The Switch can do quite a lot. It can work as a handheld unit, or with a television; can be used in single and multiplayer modes; and most importantly, can be transformed into pretty much anything, including instruments like the piano… but at the end of the day, the fact that it still relies on wired audio seems primitive and limiting.

The Genki, designed specifically to solve this nagging problem, adds to the already-laden feature list of the Switch, giving it the ability to go wireless in the audio department. Its design beautifully complements the Switch, with an all-black outer casing, a soft rectangular form, and two buttons on either side, colored blue and red to match the Switch. These buttons literally are the only interface you need, and to connect to a wireless headset or earphones, just press the button and you’re all set. Using Bluetooth 5, the Genki pairs with headphones, delivering high-quality audio with zero latency, up to a distance of 60 feet!

Turning the Switch wireless doesn’t just upgrade the console, it makes sense. The Switch was designed to be more than just a handheld device, made to be used with televisions as well as multiplayer gaming, so providing an aux input literally feels being bound by a chain. The Genki’s wireless-audio dongle for the Switch doesn’t just make gaming from afar (as one would with a television setup) easy, its design also lets you route audio to two headsets, making the multiplayer experience easy too. The two colored buttons at the base of the dongle match perfectly with the colors of the two controllers, intuitively allowing you to pair with two Bluetooth headsets and turning the multiplayer audio experience wireless too. Besides, let’s not forget the great things it does for the Labo kits too, allowing you to engage with the Switch without the primitive hassle of wired headsets… or better still, broadcast the audio to a powerful wireless speaker to make your gaming experience larger than life! 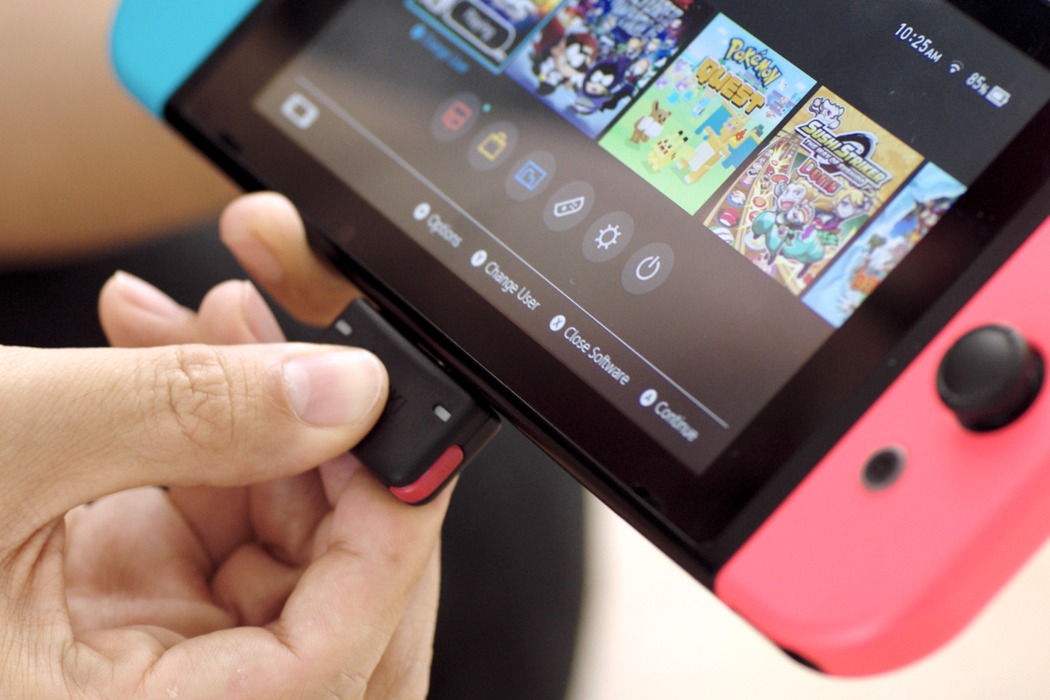 Together at last, GENKI gives you the freedom and convenience of using your favorite wireless Bluetooth headphones when you’re gaming on the go. 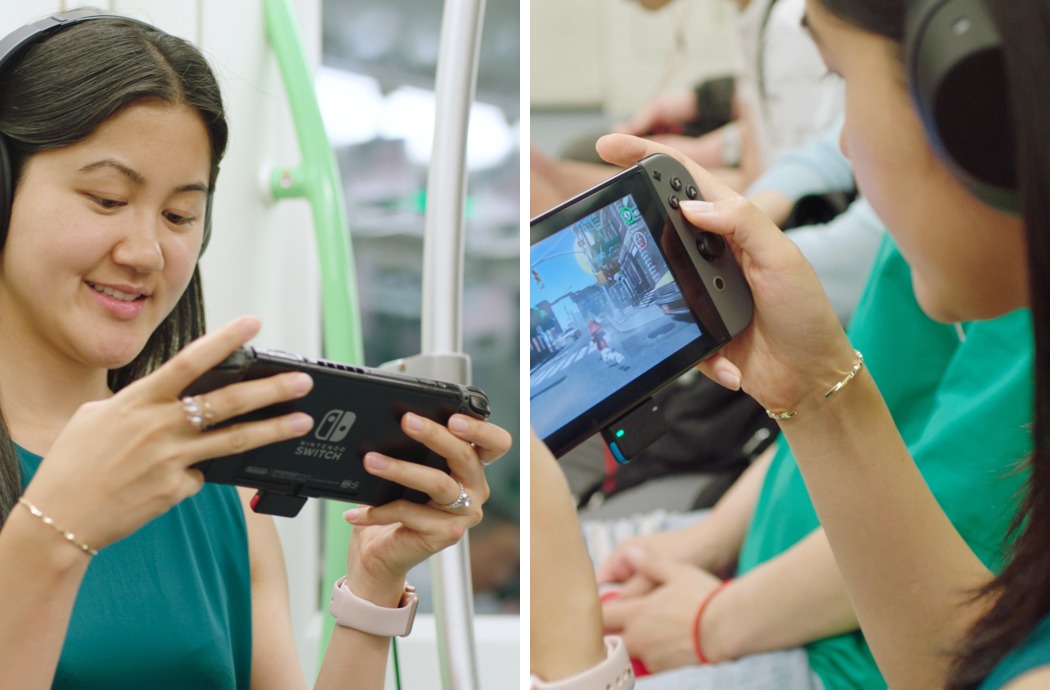 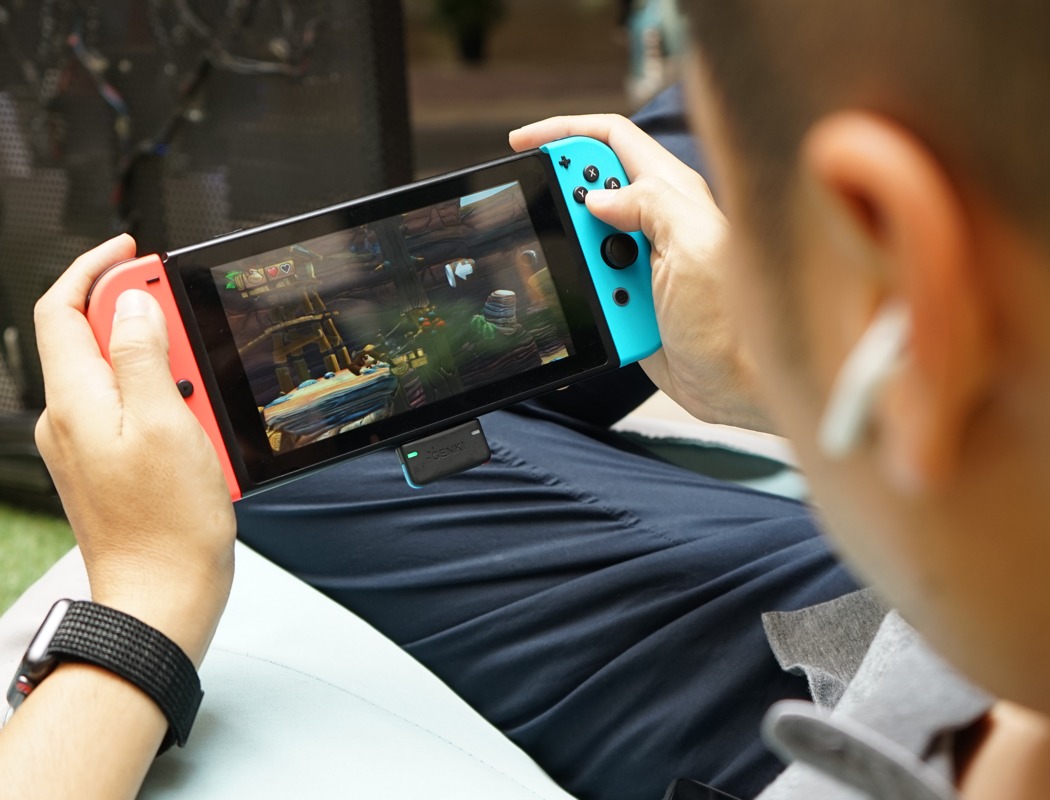 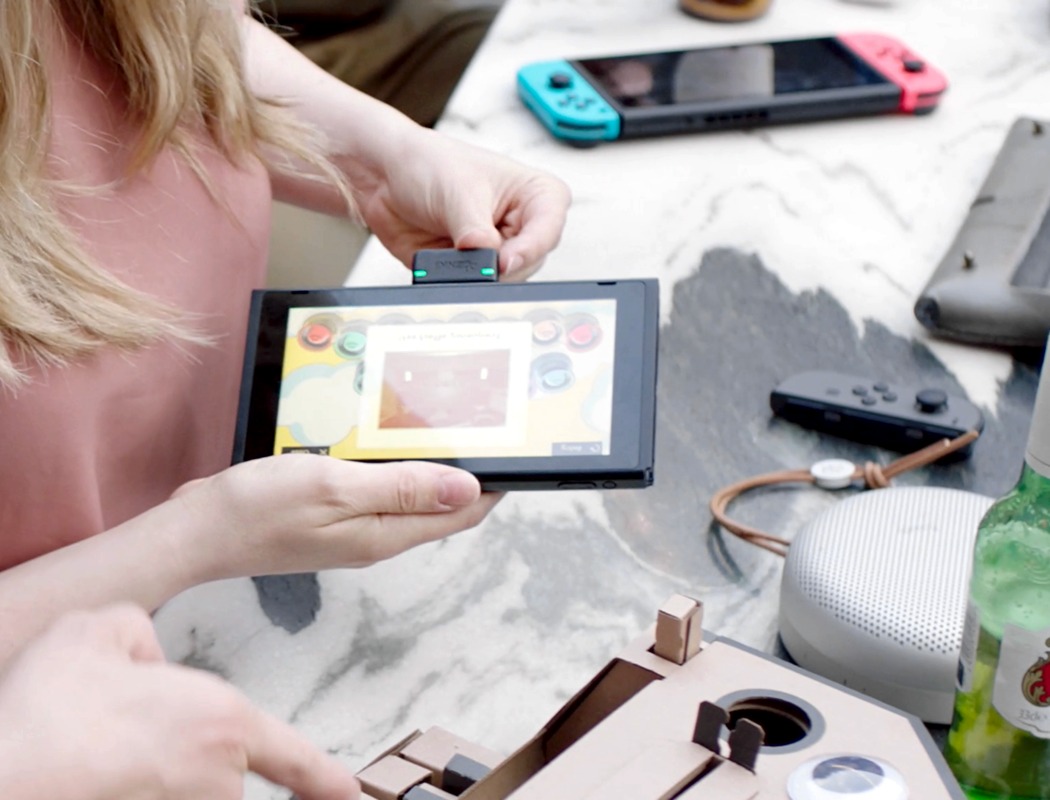 FEATURES AT A GLANCE

GENKI is the first and only Bluetooth audio transmitter built to the USB Type-C standard. Why USB Type-C? There have been some workaround solutions that we’ve tested but none of them were a satisfying solution for the Nintendo Switch. These workarounds introduce extra latency, static noise, lower fidelity and volume and many do not support newer devices such as the Apple AirPods. 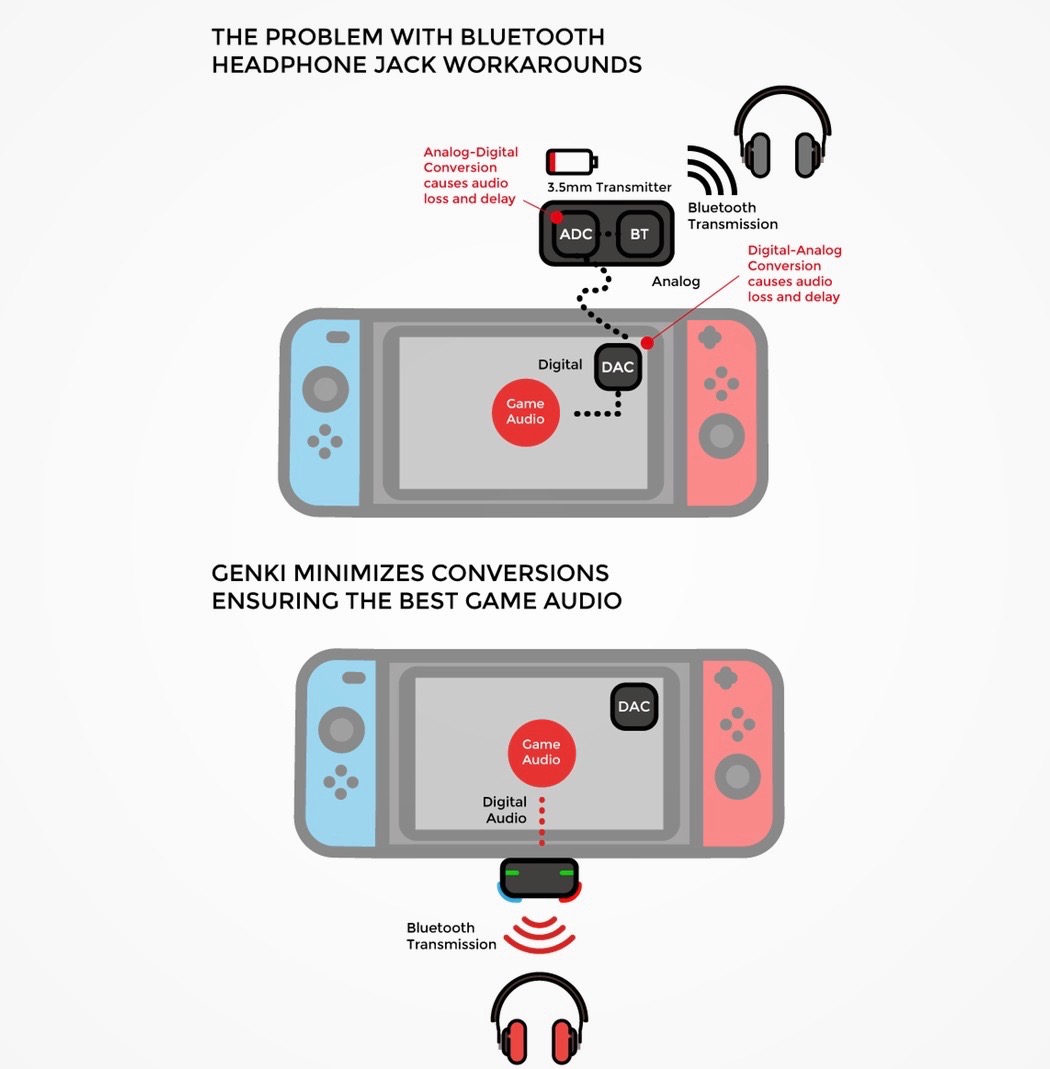 This led us to create a better solution – through the USB-C port we’re able to simply remove the redundant audio conversions providing gamers the best latency and audio quality. 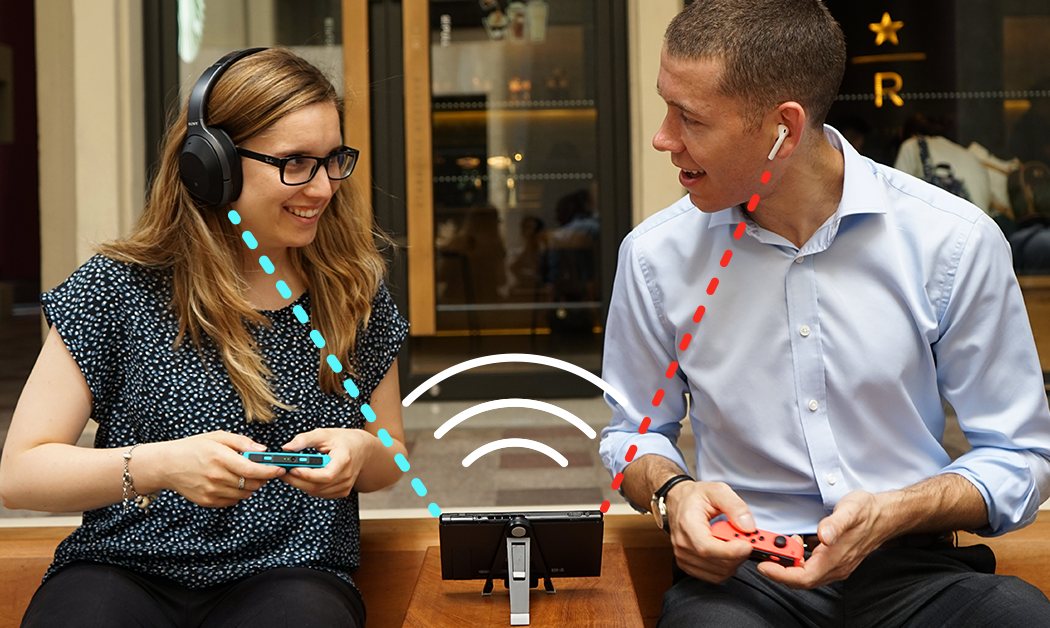 One of the things we love is detaching the Joy-Cons for an instant transformation into a two-player portable console. But chances are you’re waiting around in a pretty noisy place so one of the coolest features we have is multiplayer support.

So maybe you’ve noticed that the two buttons on GENKI are labeled 1P and 2P. With this setup we actually stream stereo audio to two separate headphones, neat huh. So you can better enjoy SnipperClips or Hulu with loved ones.

BLUETOOTH 5 – WORKS WITH EVERYTHING!

But what if you wanted to unleash the full potential of your Bluetooth speakers? We know those built-in speakers are pretty weak so we got you covered.

If you’ve ever experienced audio where voices don’t seem to synchronize with what you’re watching you know it can be quite distracting. This is even more important in games where your reaction to a sound can mean success and game over.

To combat this, they made sure GENKI included the fastest industry leading audio codecs. With aptX Low Latency we can achieve sub 40ms latency. Typically, the human ear can not distinguish below 100ms so rest assured you’ve got the best. 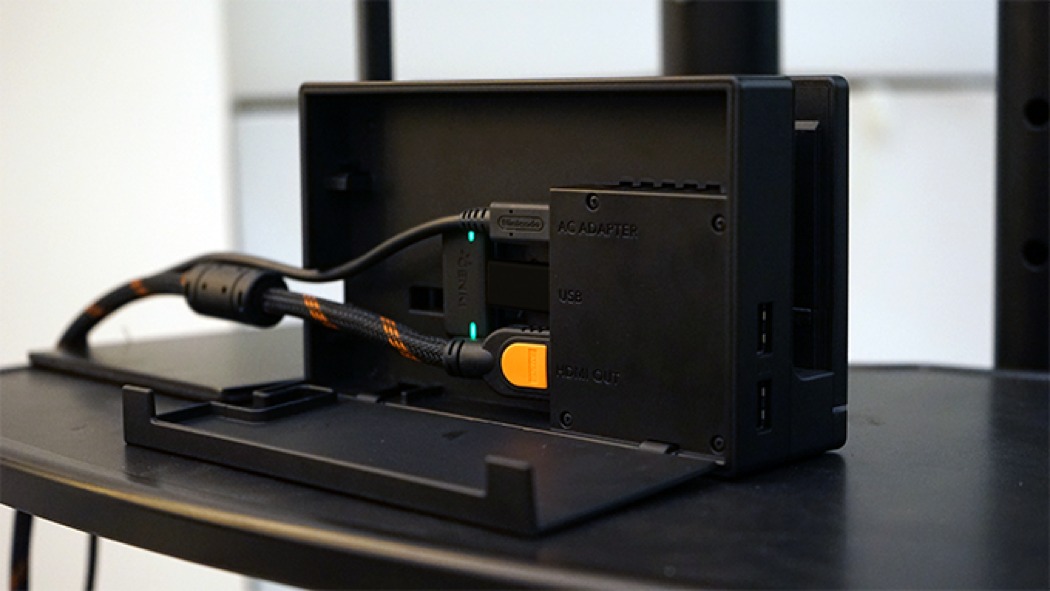 The dock adapter is a simple USB adapter enabling you to use GENKI with your Nintendo Switch docked. Just plug it into any of the three USB ports in the dock; it can even be safely tucked inside the back panel to be hidden. 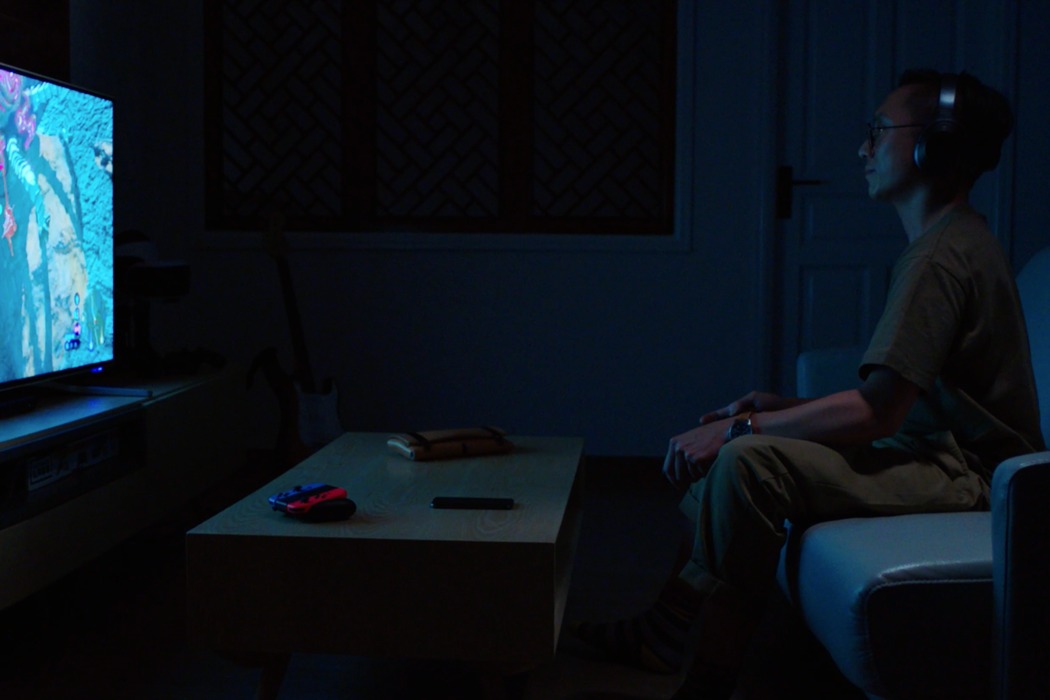 Playing late into the night without disturbing others.

HOW TO USE GENKI

– Hold the 2P button to pair with your second audio device
– Enjoy wireless audio, with a friend 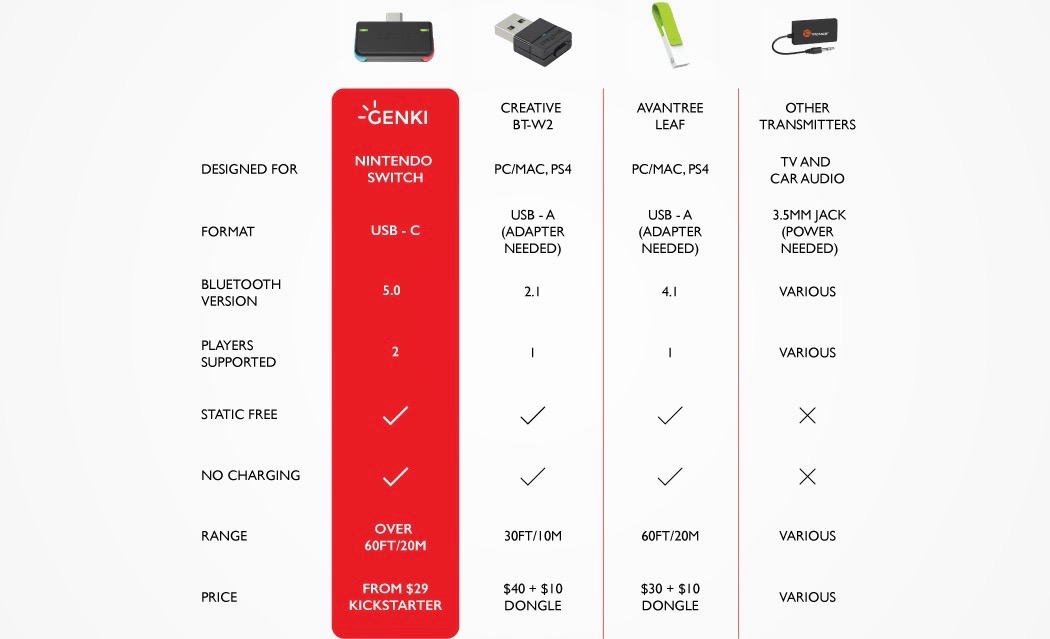 How many tools does it take to assemble luxury furniture? None!

Furniture curation is my new passion, maybe it is so because I am spending so much time home but there is no denying that well-designed…

Rabbit Hand Mixer, Why Not?

I love a design that merges the functionalities of completely divided products. One part kettle, one part steamer, the Ketmer saves space by combining the…

I can’t begin to tell you how many would-be delicious dishes I’ve ruined because I over-spiced, under-spiced, or… well, just-plain-wrong-spiced them! It can be hard…