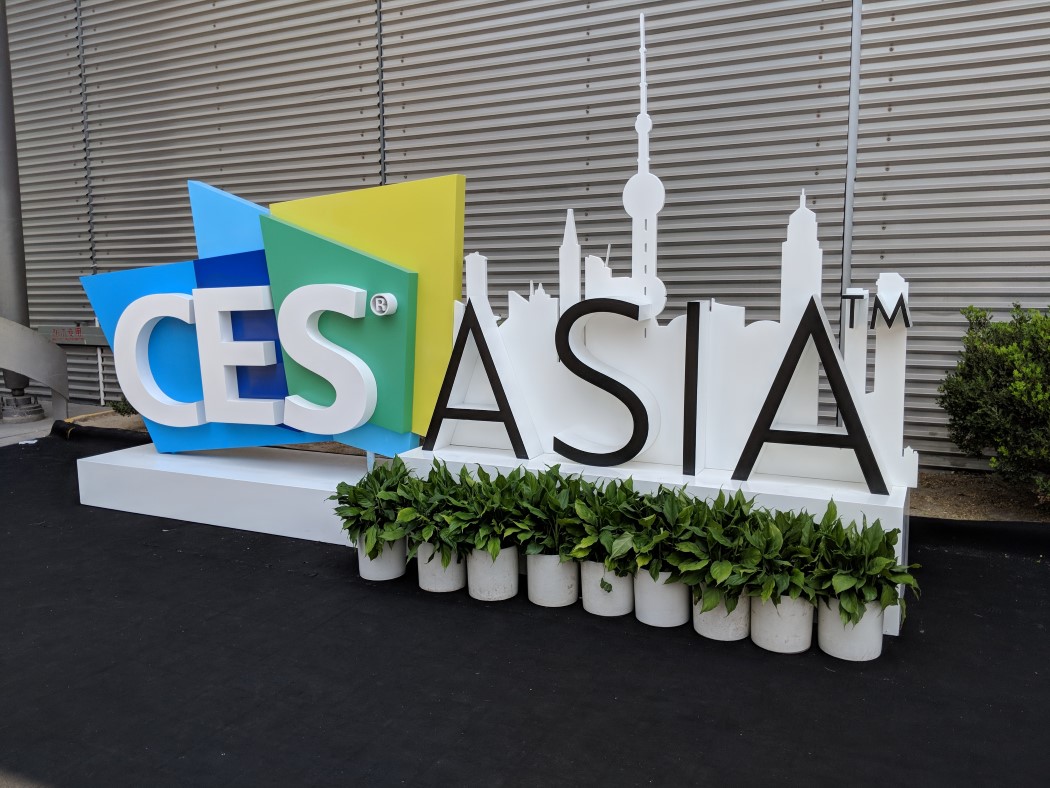 At the beginning of every year, the Consumer Electronics Show is held in Las Vegas, and towards the middle of the year, its Asian counterpart is held in Shanghai. CES Asia found itself being held across five football stadium sized exhibition halls at the Shanghai New International Expo Centre and multiple ballrooms at the Kerry Hotel in Pudong, the urban half of Shanghai.

There’s a marked difference between the CES in Las Vegas and the CES in Shanghai, and most of it stems from the techno-cultural differences of the two halves of the world. While Facebook, Amazon, Google dominate the west, China shuns them, fostering and nurturing its own companies like Baidu, Alibaba, and Tencent. This so-called dividing line isn’t as crisp as you’d expect, with technological advancements in both the east and west taking off at the same pace (AI, AR/VR, Drones, Self-Driving Cars, Robot Assistants are all found in abundance in both hemispheres), but… but there’s a distinct cultural difference between the two. Asia is much more receptive to robot assistants, for example, since Terminator’s Skynet never really made a cultural impact on the east as much as it did on the west (let’s also not forget recent Chinese government projects and the Black Mirror episode titled Nosedive). This results in quite a few differences between CES Vegas and CES Asia, resulting in unique flavors in both ‘cuisines’, but make no mistake, both pack a massive punch. CES Asia is every bit as chaotic as its western counterpart (if not more).

Below are a few interesting takeaways from what CES Asia had to offer this year. Some incredibly cool, others awkward, funny, and borderline creepy.

THE INCREDIBLE HALF OF CES ASIA 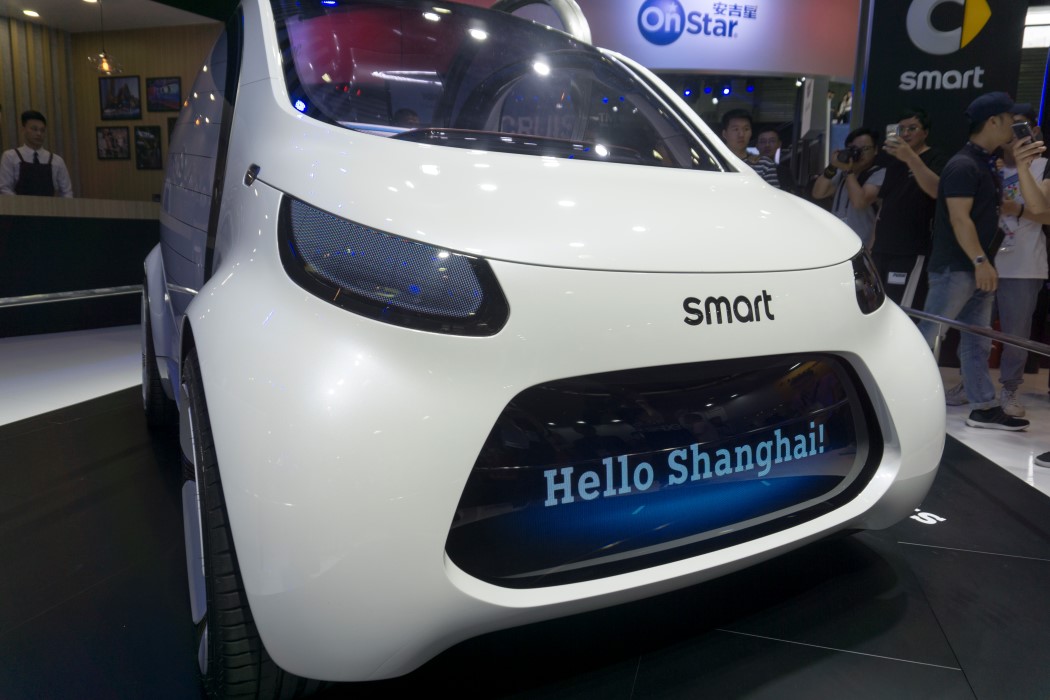 smart’s EQ vehicle was all about stealing thunder from the Mercedes Benz stall right next door. It did so with its rather intelligent looking family car that could communicate with you via a display panel where the car’s grill is supposed to be. 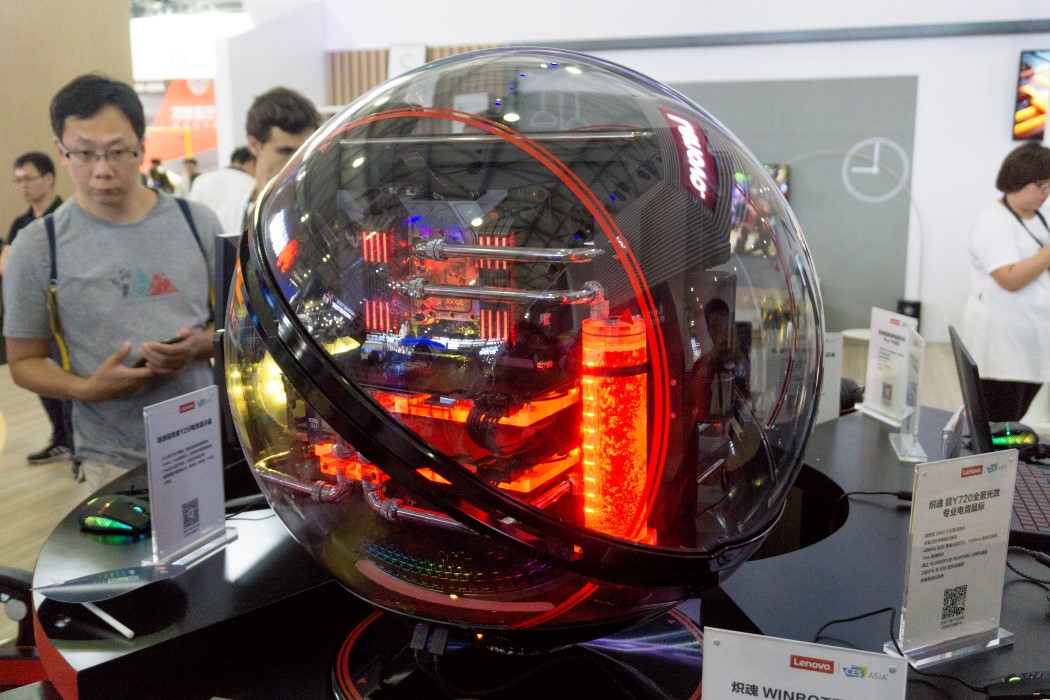 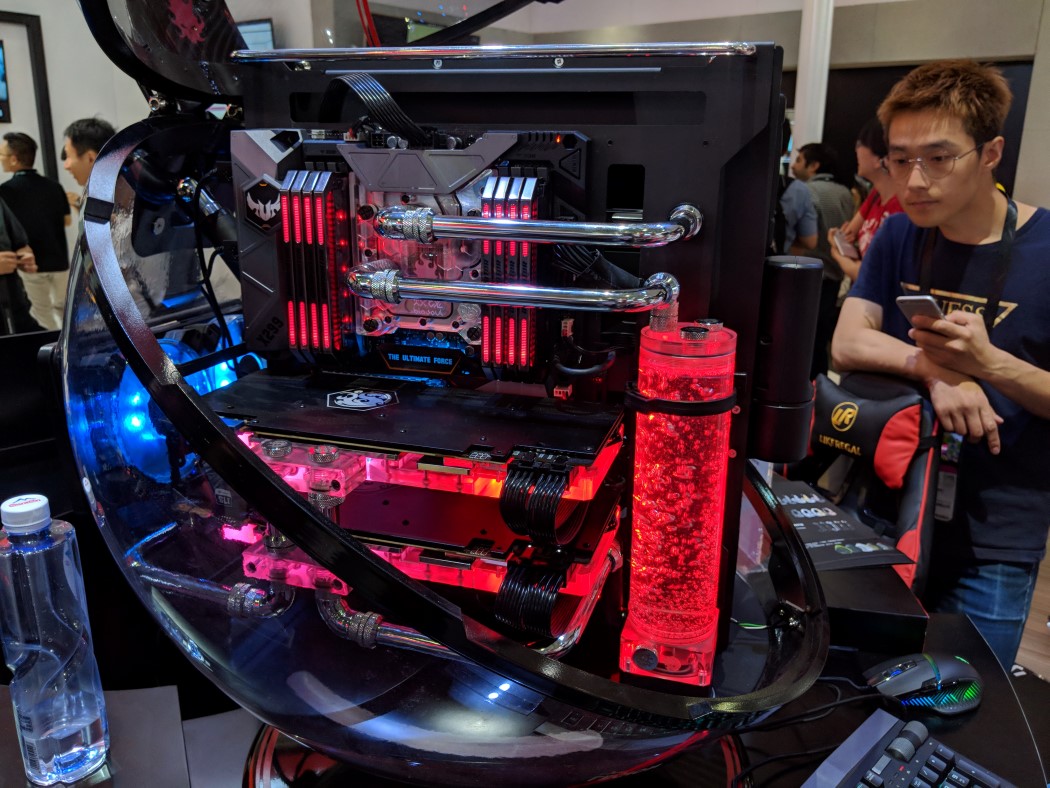 You can’t help but drool at Lenovo’s WINBOT, easily their most monstrous machine ever built with an Intel Core i9 7980XE ( 18 core 36 thread) processor, NVIDIA’s GTX TITAN X GPU, an impressive liquid cooling rig to keep this beast at working temperatures, and an absolutely to-die-for design complete with red LEDs and a transparent spherical housing. 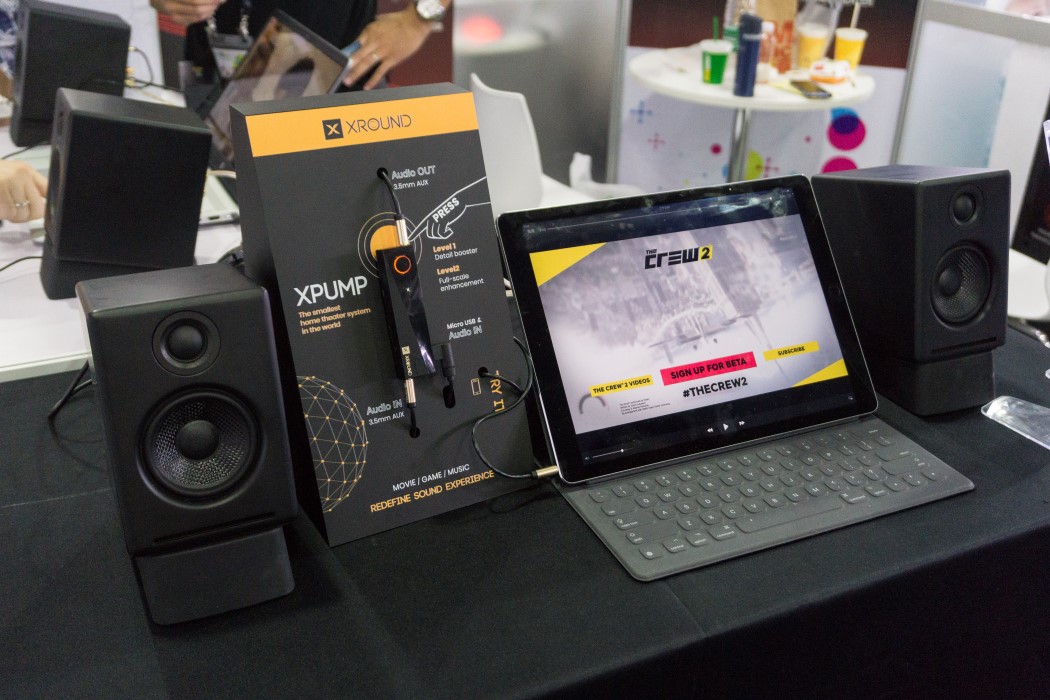 XROUND’s XPUMP silently sat in a corner of CES, but everyone who walked past this unsuspecting stall pretty much had their minds blown away. A simple device that sits between your playback machine and dual-speaker-setup, the XPUMP can make your two speakers sound exactly like a home theater, as it restructures the sound in a way that makes a 2.0 layout seem like a 5.1 surround sound system. They say that technology that’s sufficiently advanced is indistinguishable from magic, and the XPUMP felt a lot like a miracle, with a sound transformation that was so extreme, I couldn’t believe my ears.

Laser robotic arm that can etch/cut/burn pieces of paper, plywood, plastic, or toast for you? Yes please! 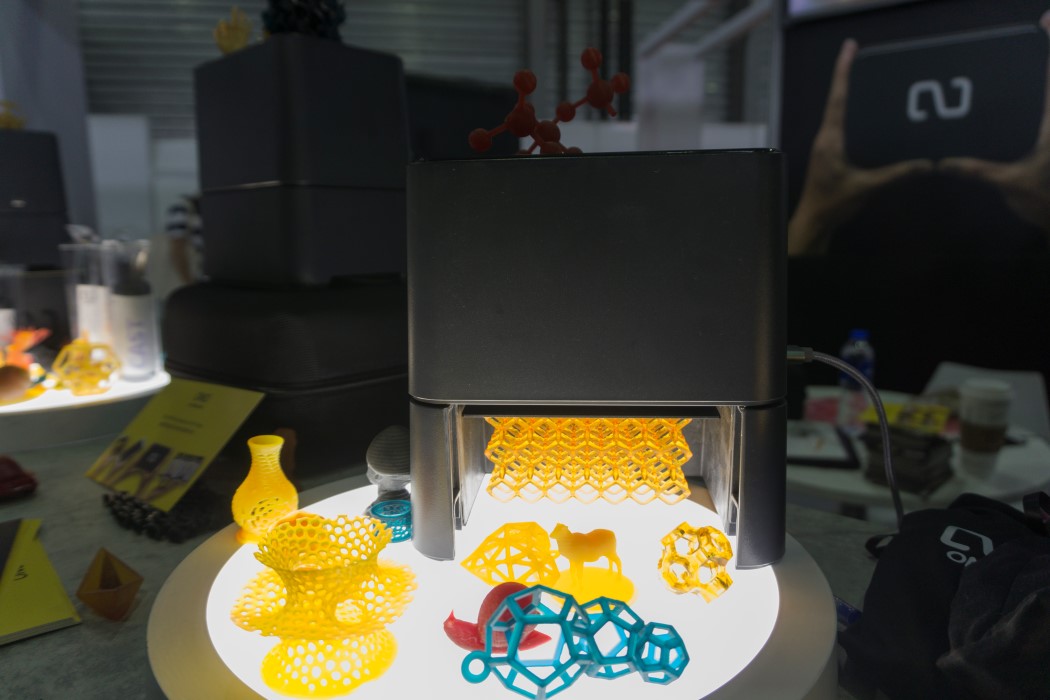 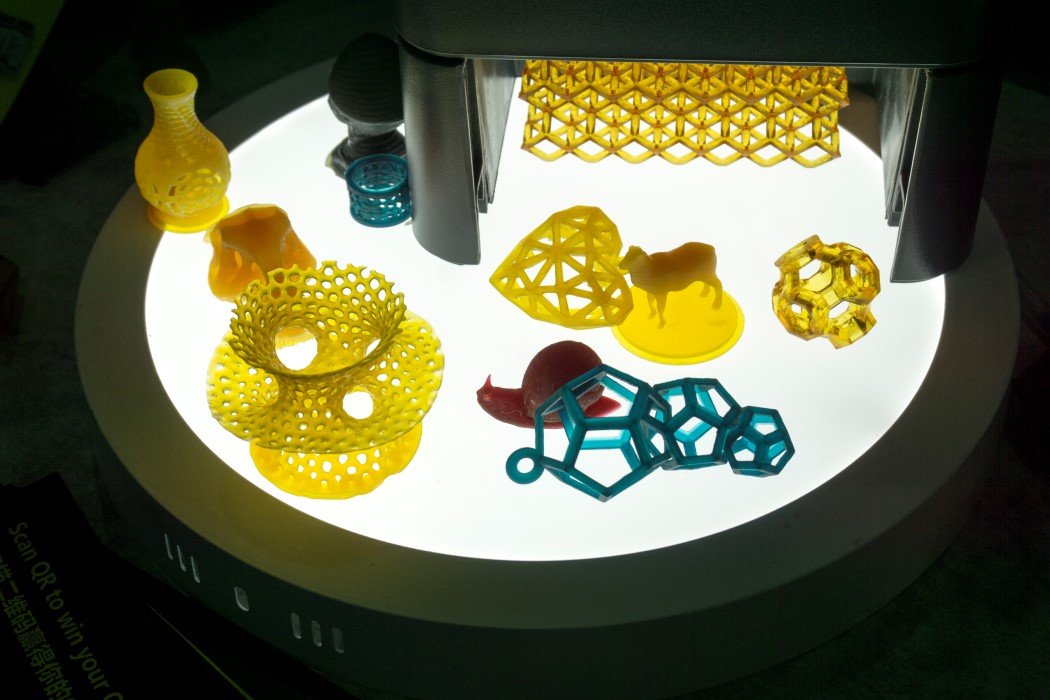 ONO showcased their $99 printer technology that literally uses your smartphone to create prints. How does it do that, you ask?? The smartphone sits under a bed of resin, flashing black/white images and curing the resin to create your product. Read more here! 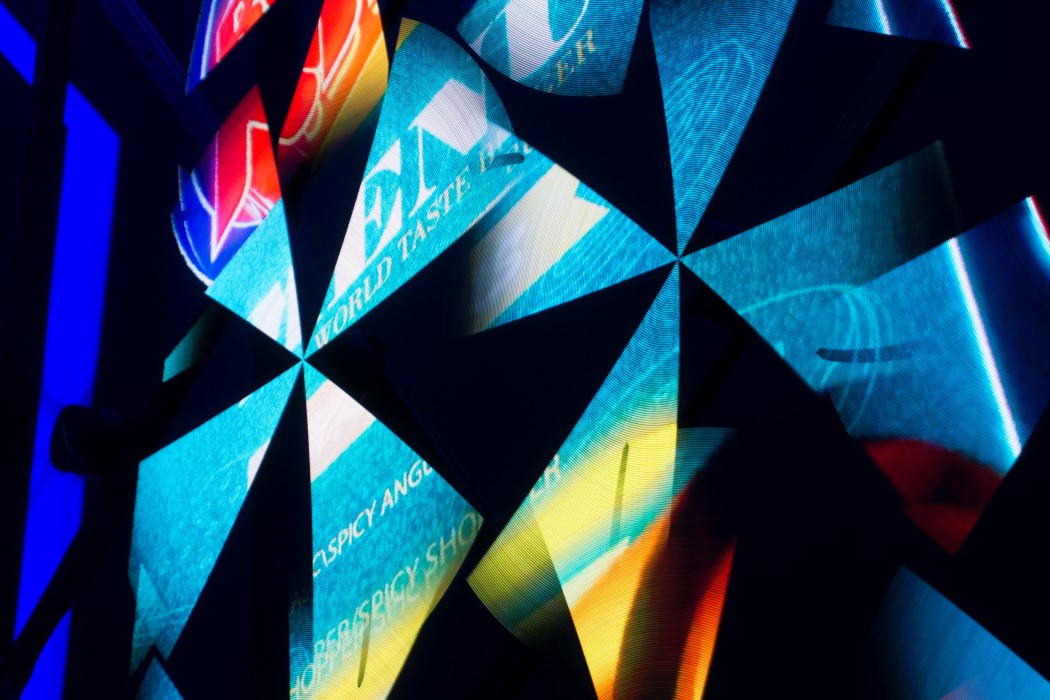 DSeeLabs showcased a holographic LED Fan display that involved multiple two-blade fans with LEDs on them. As the fans rotated, the lights formed images (thanks to persistence of vision) that looked like they were floating in mid-air, as the fans themselves disappeared from view. Much like those USB Fan Alarm Clocks, but bigger, badder, and better. 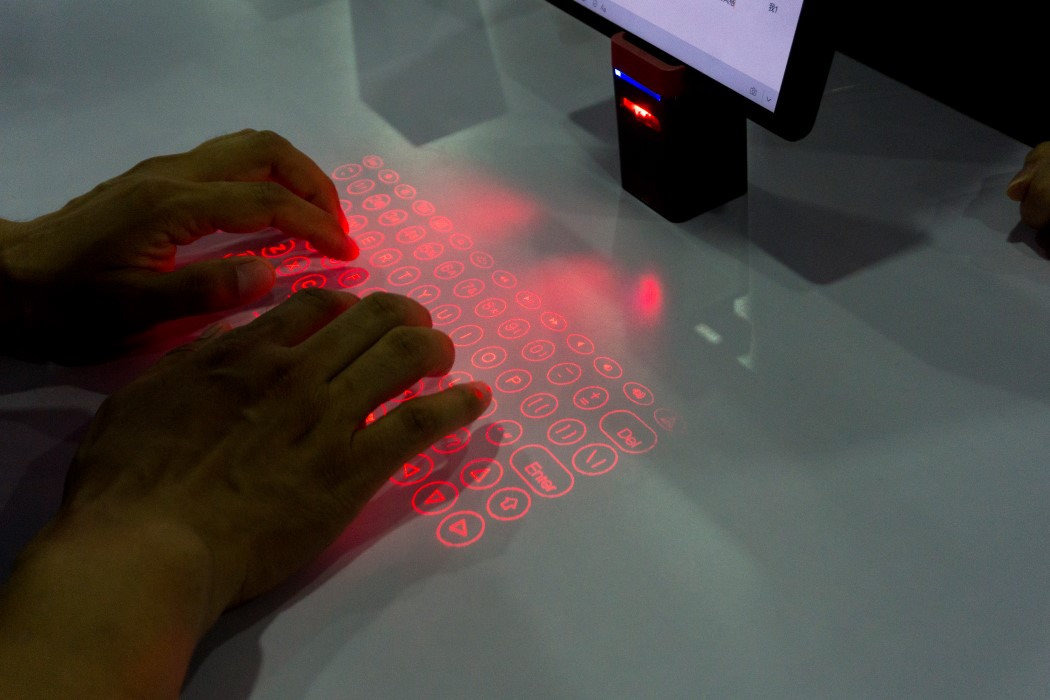 I admit, pretty old technology that’s been around for a while now, but it still doesn’t fail to amaze me, as a laser projects light onto a surface in the shape of a keyboard while a sensor can pretty accurately register which key you’re pressing simply by plotting which laser key your finger touches. Million dollar idea for an iPad case! (I call dibs) 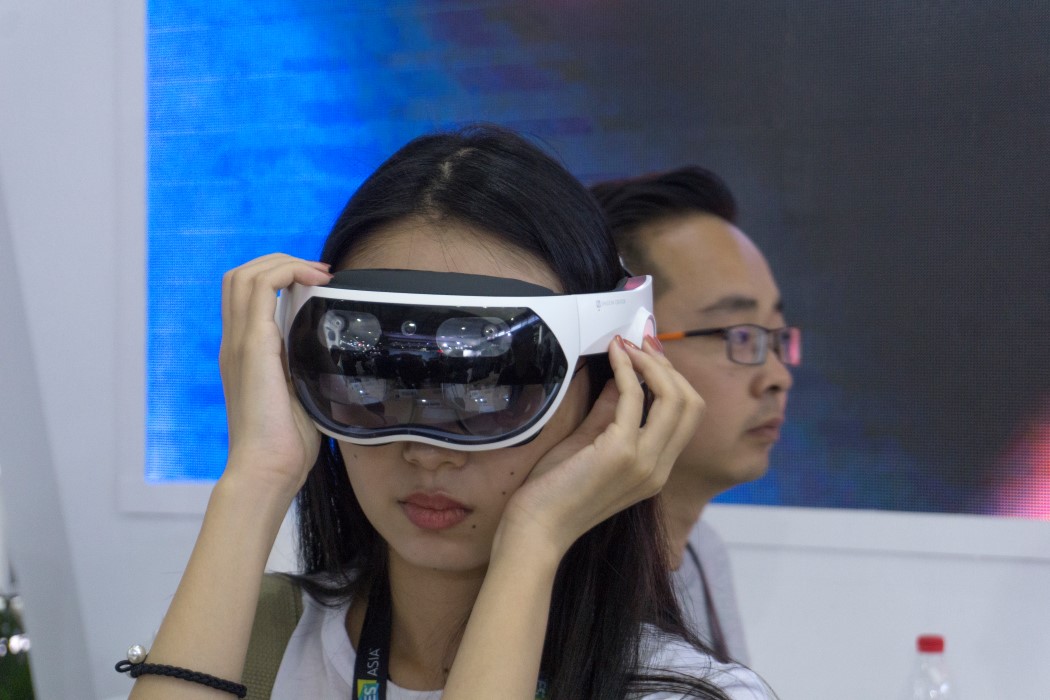 Chinese company Shadow Creator is spearheading the AR movement in China, with the Action One, a Hololens-killer-of-sorts that projects AR elements in your vision that even react to your hand movements.

THE INCREDIBLY WEIRD HALF OF CES ASIA 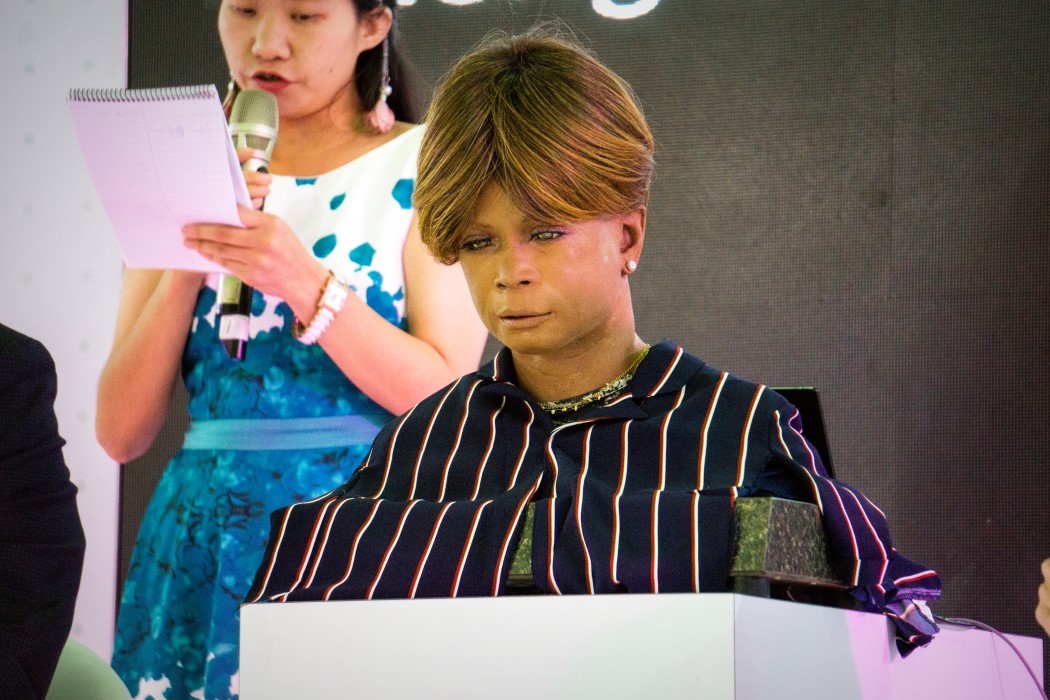 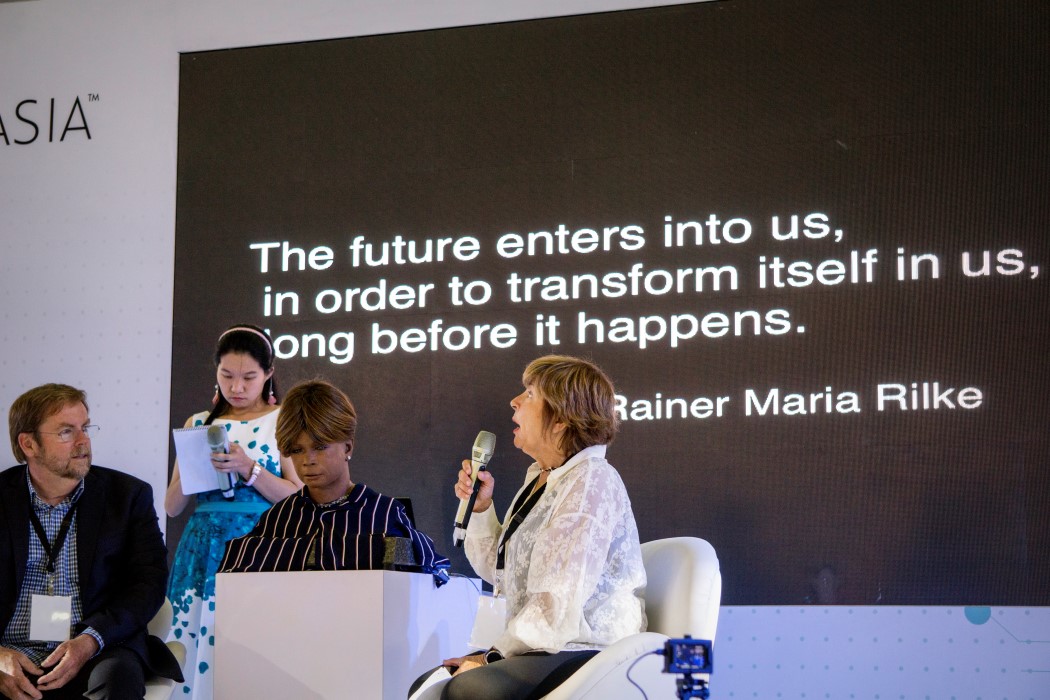 Meet BINA48, a humanoid robot based off a real human. BINA48 is basically one of the first attempts to make humans immortal (if that’s what you can call it) by taking the thoughts and thought patterns of a real woman (named Bina) and inputting them into a humanoid robot, effectively allowing a Bina to stay alive long after the original Bina is gone. Interacting with the BINA48, however, is nothing like a real human, since she’s only the top half. But hey, she’s made an appearance on Liquid Science, a TV series currently available for streaming on Netflix. 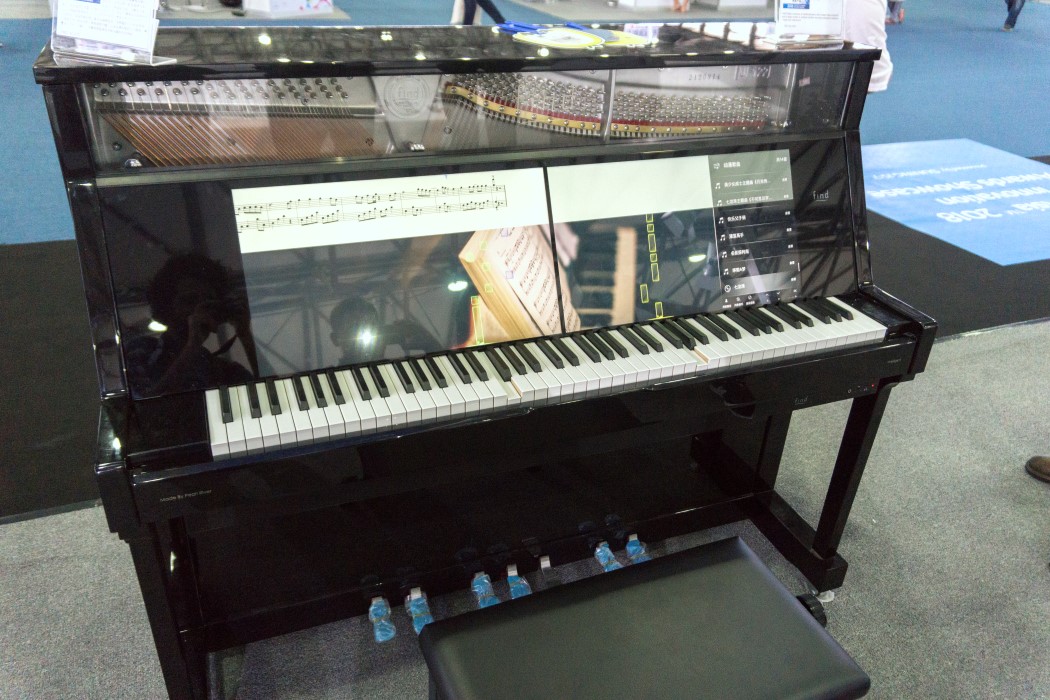 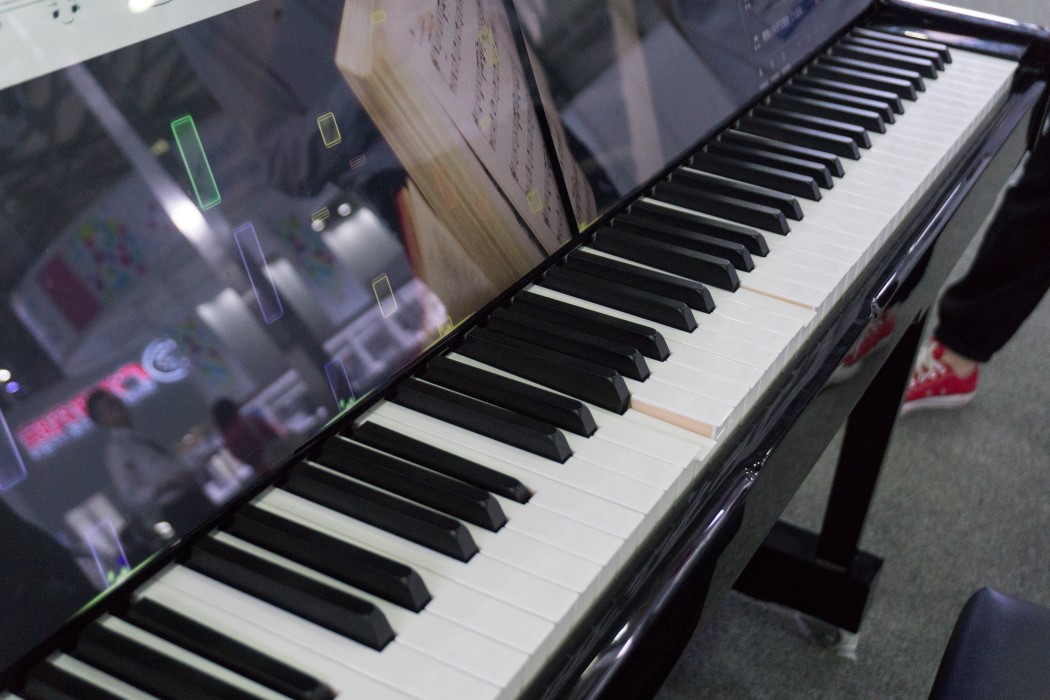 As you walk across the room, you’re suddenly greeted by ominous music playing on this “smart piano” that not only plays on its own, but also comes with a screen that either lets you view sheet music as you play, or turns into a piano-based version of Guitar Hero as you frantically hammer at keys to score high points. Cool? I’d say so. Necessary? Now that’s debatable. 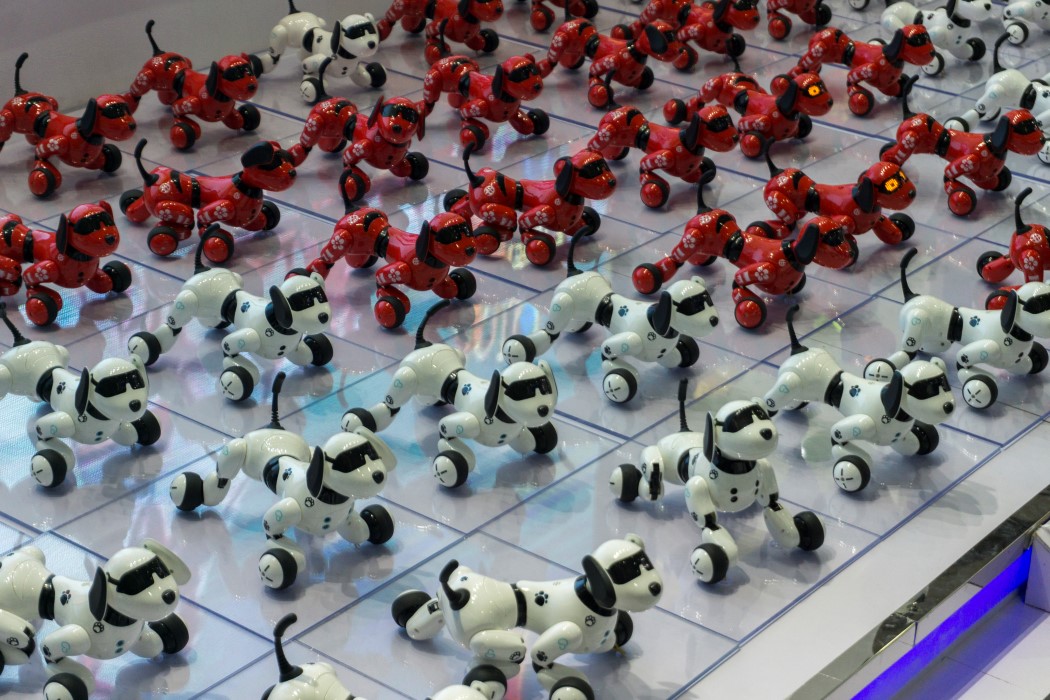 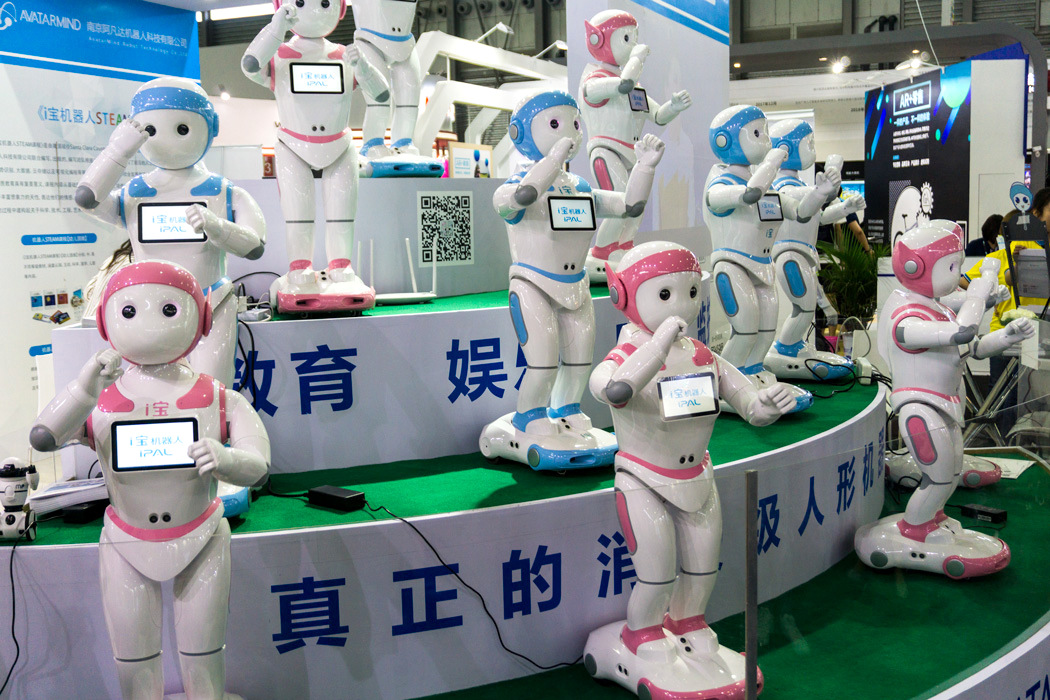 A robo-dog army? A bunch of weird looking robots dancing to pop music? That’s just your run-of-the-mill regular stuff in China. These are just two of the robot exhibits in a hall that was dedicated to robots and drones. It’s creepy and interesting watching some of these robots mimicking humans, trying to perform tasks, and getting rather frustrated as their microphones can’t pick up audio commands from people because of all the noise around them. As long as they don’t get too frustrated, I think our human race should be fine! 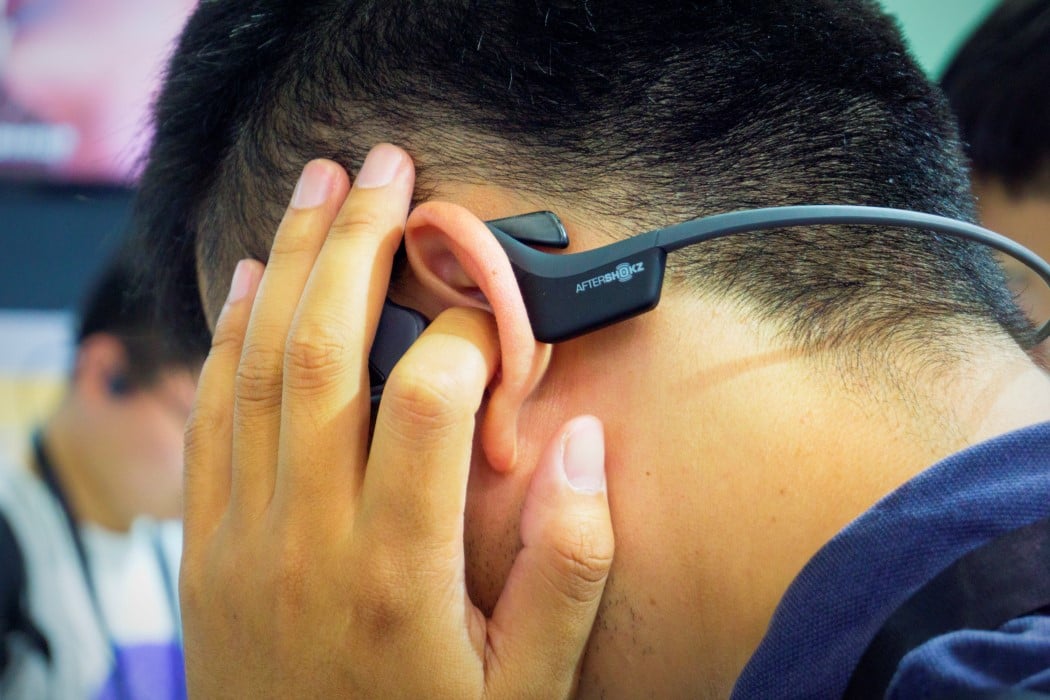 Speaking of frustrating, bone-conducting headphones still failed to impress at CES Asia. They’re still flimsy, treblish, barely audible, and come with more cons than pros, as companies still make the promise of incredible audio that plays ‘inside your head’ as your ears stay open to real-world sounds. Read more on it here.

A Big Buttoned Iron for Dummies!

As playful as it looks, the Pushiron’s single red button isn’t just for show… it results in enhanced safety and intuitive use. By twisting it,…

This tiny portable home fitness kit is the size of a water bottle and holds everything you need for a full-body workout!

Even with gyms opening back up around the world, the home fitness industry has seen a total overhaul in design as a result of the…

Chewp  is a playful series of kitchen tools for parents and children designed to raise awareness about healthy eating and good nutrition. The included educational…