For a person who sees the bigger picture, who isn’t afraid to think big, and whose imagination is as uncontainable as the universe, the DeskSpace is perhaps the greatest desk accessory ever. Made from polished precious minerals, the DeskSpace is your entire solar system (Sun excluded) on your desk, arranged in linear order, comprising every planet made from the appropriately selected gemstone.

Just marvelous to look at, the DeskSpace sits wonderfully on your work table, coffee table, or mantelpiece. Its beauty is greatly enhanced up-close, when you pick up the individual planets and take a look at how the light shines and bounces across the mineral’s beautiful features. Each planet is carved from a mineral that best embodies its color and terrain. The minerals are ethically sourced from mines across the globe. Larger raw blocks are washed and broken down into smaller chunks, which are then dried and hardened in industrial ovens at 176°F for weeks. Individual pieces are then shaped into cubes (of the exact size as the planet model), and are then hand-shaped by expert craftsmen into their perfect, spherical shapes. Each sphere is then precisely measured and checked for imperfections – any that do not meet the grade are rejected. The spheres that pass this stringent quality check are then polished to give them their impeccable sheen, and bring out the visual properties of the material they are made of.

Each planet has its own specially made resting space on the linear dock (Saturn even has its rings inlaid into the sides). The planets are sized in a way that is indicative of their largeness or smallness, while still looking perfect beside one another. The DeskSpace even comes with a heavyweight book that describes the planets and the materials used to make them. Allowing you to beautifully capture the grandeur of the Solar System, of which we’re such a small part, while even and always reminding you that no matter what your problems are infinitesimal and can always be conquered with the correct spirit, the DeskSpace makes an ideal gift for friends, superiors, and colleagues, or even a beautiful addition to your work table… after all, the world (and the universe in turn) is yours to conquer! 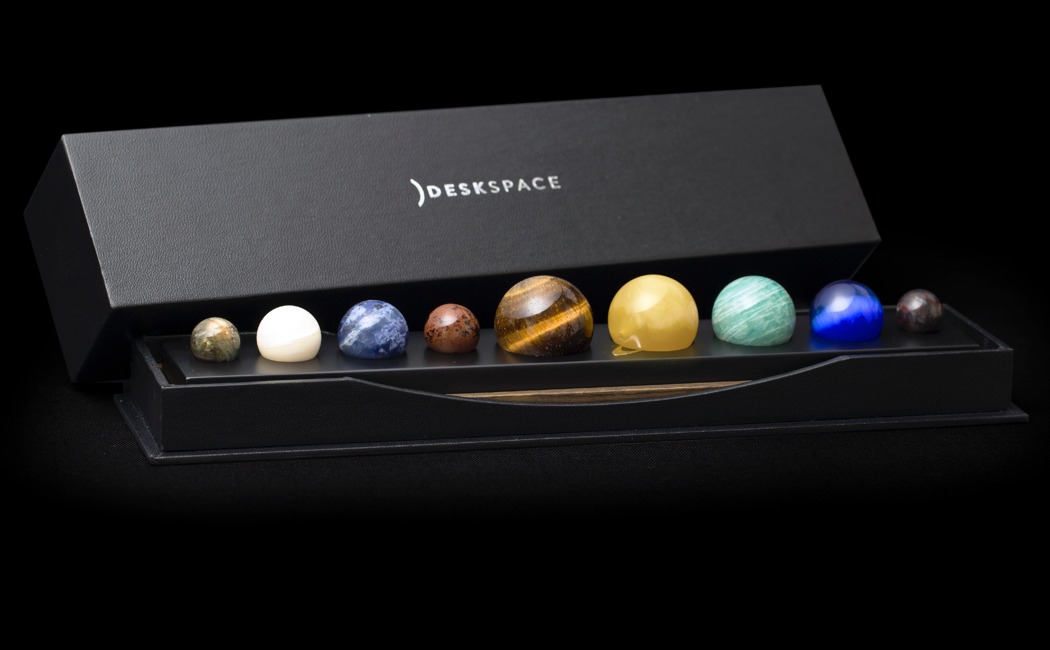 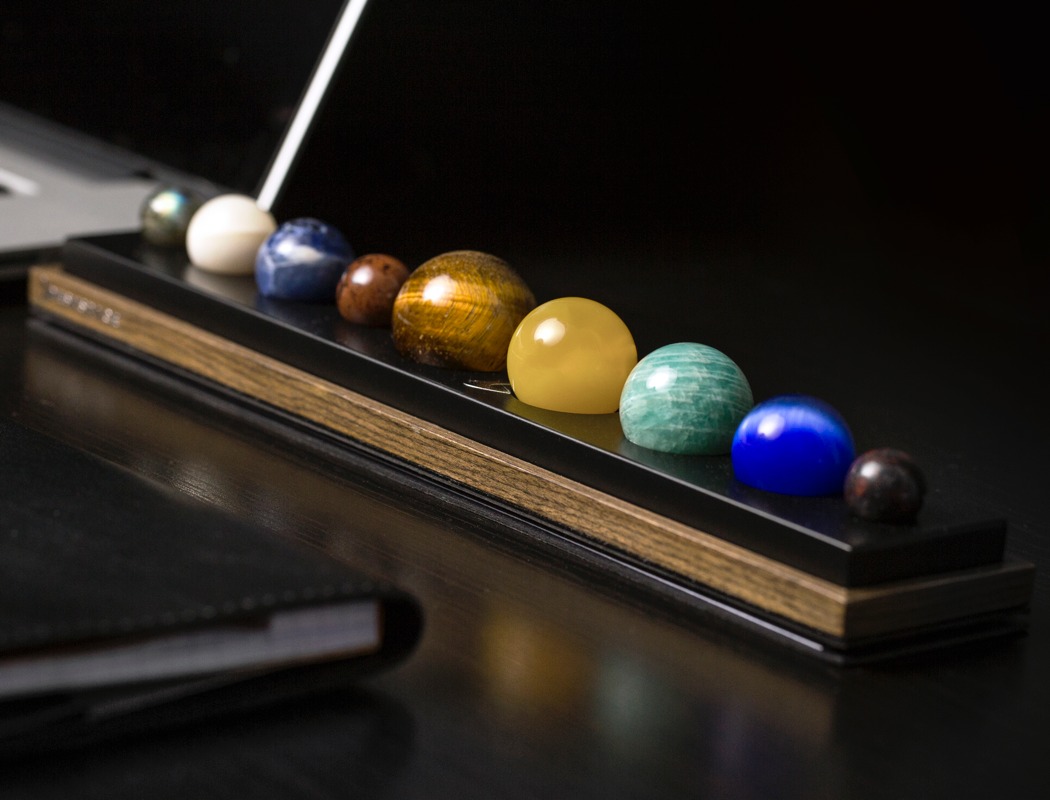 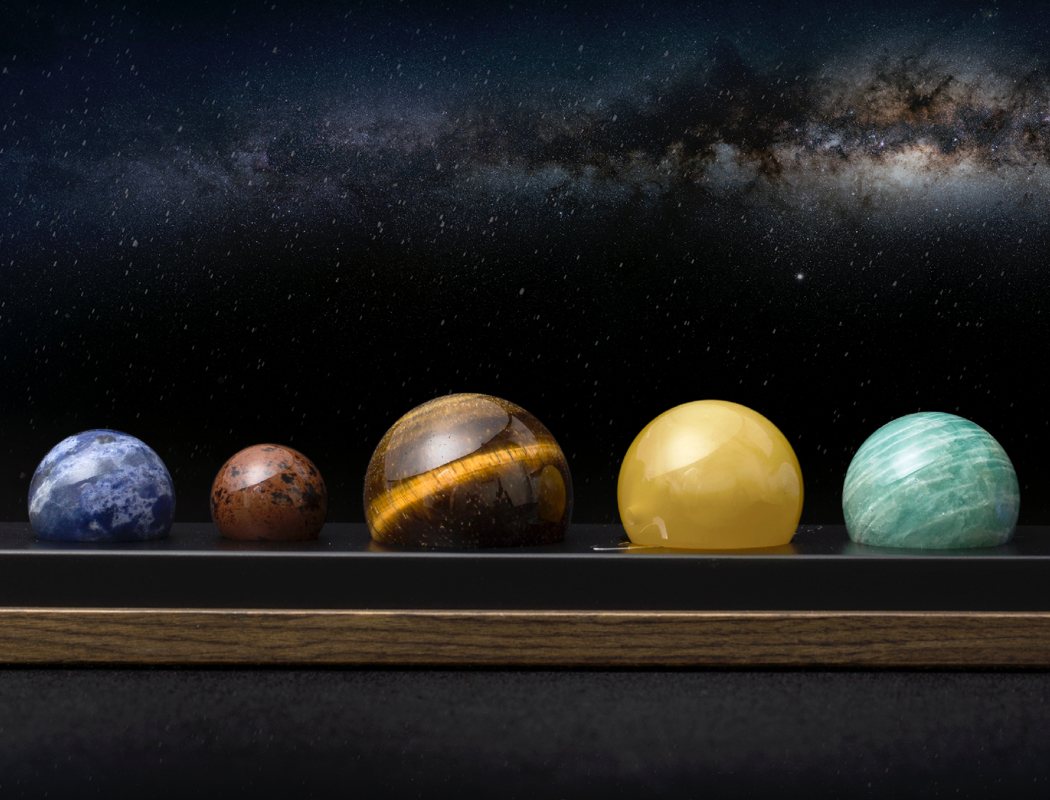 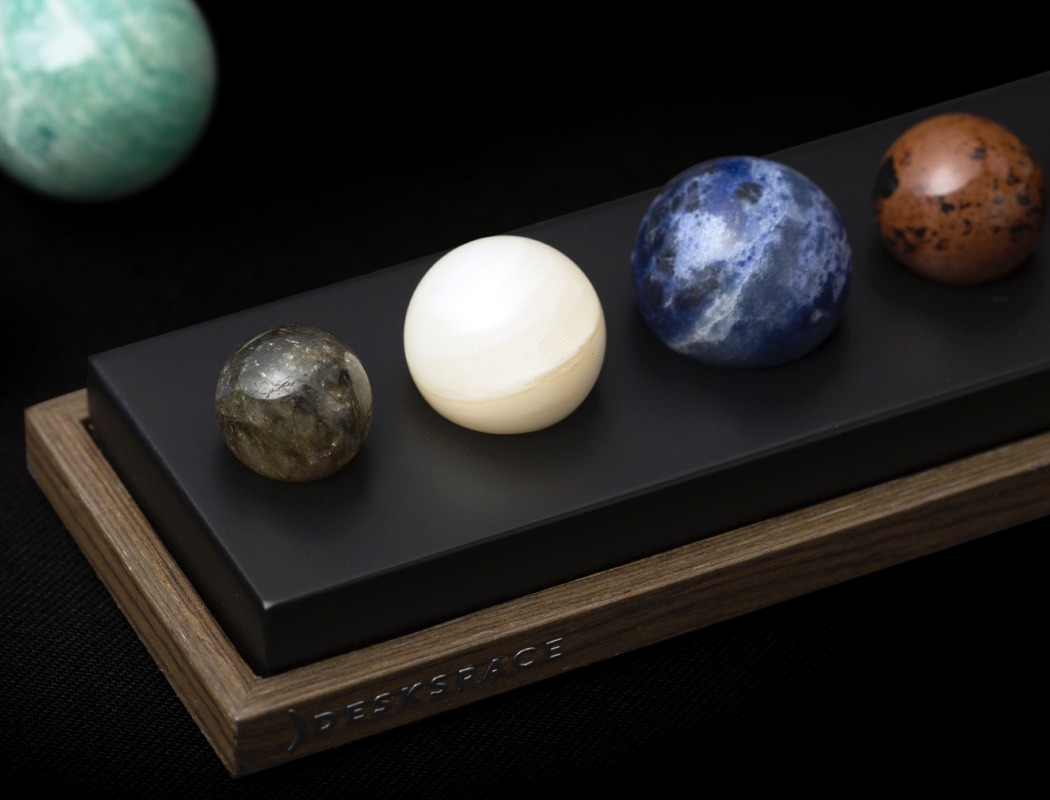 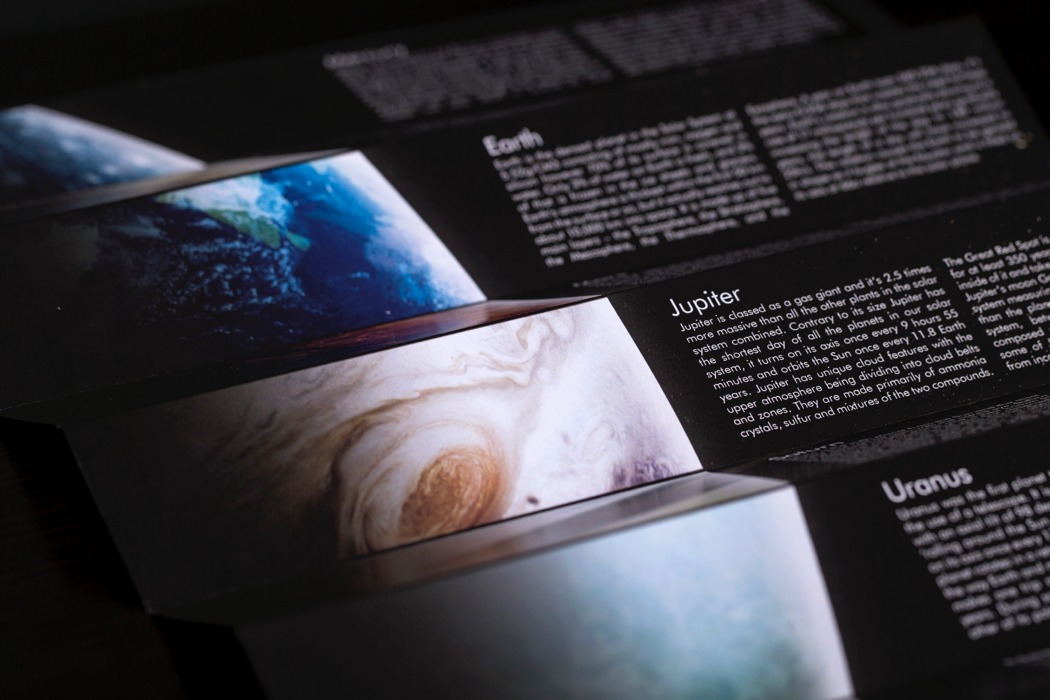 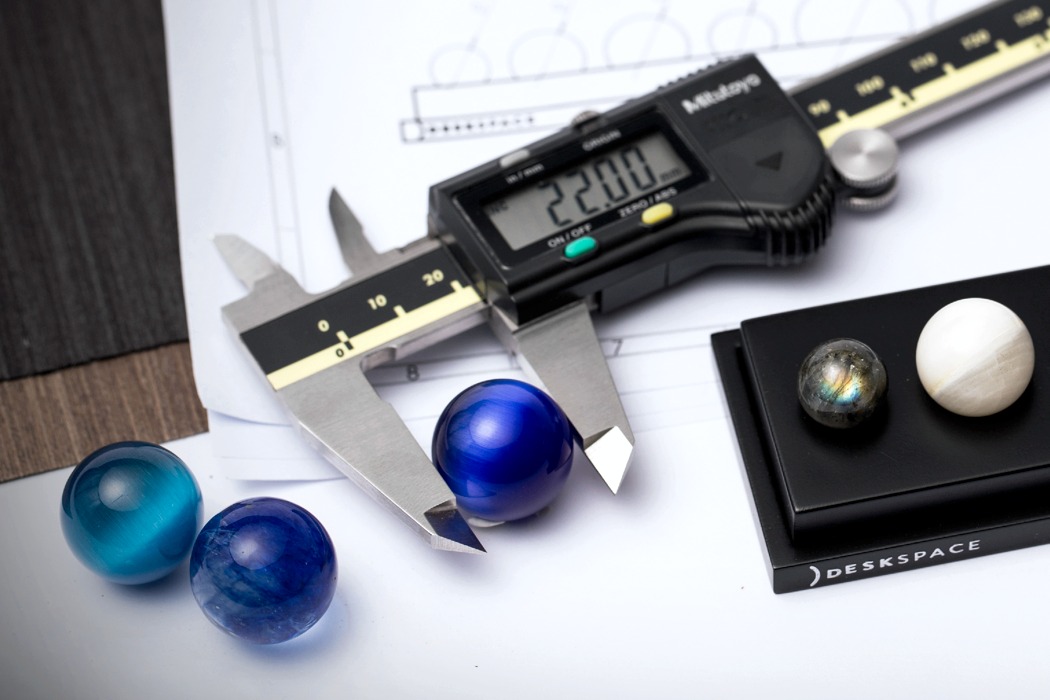 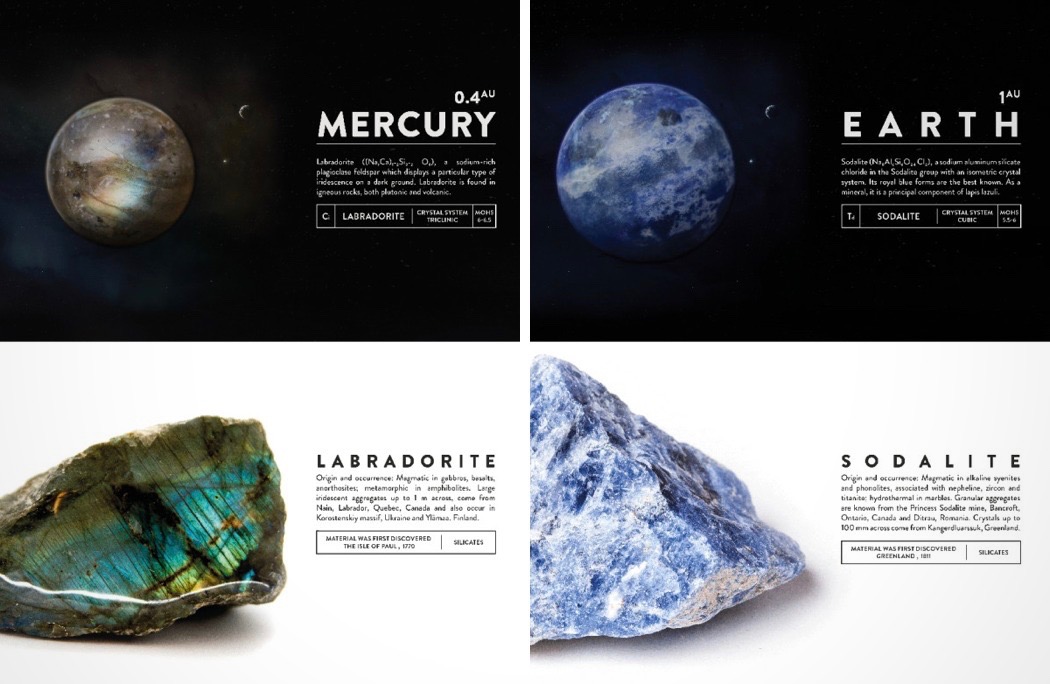 Labradorite ((Na,Ca)₁₋₂Si₃₋₂ O₈), a sodium-rich plagioclase feldspar which displays a particular type of iridescence on a dark ground. Labradorite is found in igneous rocks, both plutonic and volcanic.

Sodalite (Na₈Al₆Si₆O₂₄ Cl₂), a sodium aluminum silicate chloride in the Sodalite group with an isometric crystal system. Its royal blue forms are the best known. As a mineral, it is a principal component of lapis lazuli. 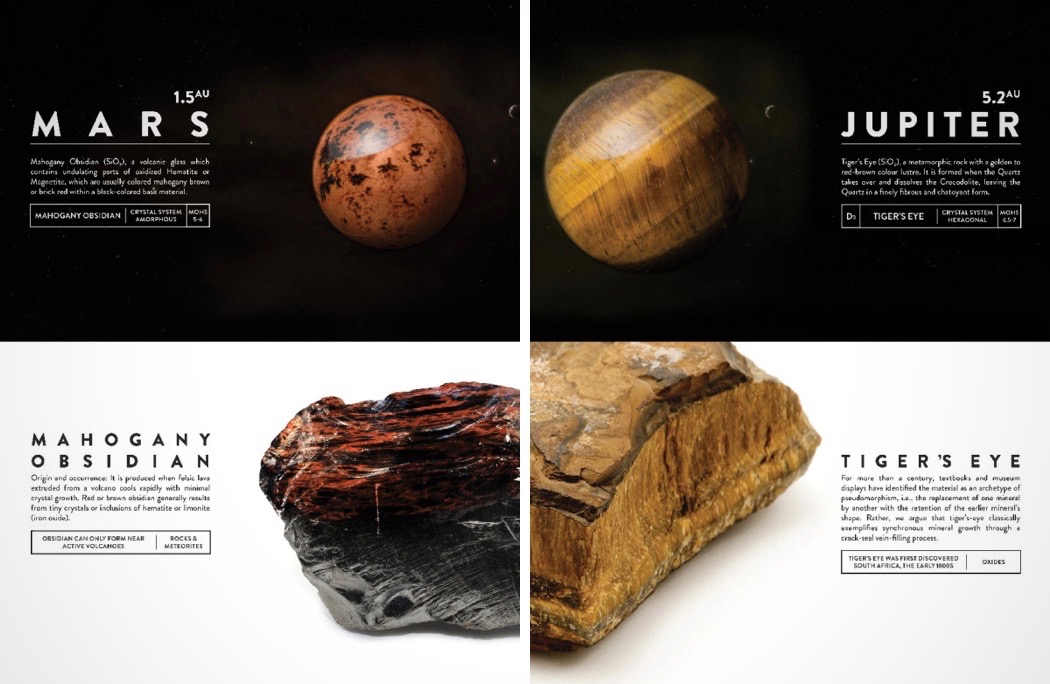 Mahogany Obsidian (SiO₂), a volcanic glass which contains undulating parts of oxidized Hematite or Magnetite, which are usually colored mahogany brown or brick red within a black-colored base material.

Tiger’s Eye (SiO₂), a metamorphic rock with a golden to red-brown colour lustre. It is formed when the Quartz takes over and dissolves the Crocodolite, leaving the Quartz in a finely fibrous and chatoyant form. 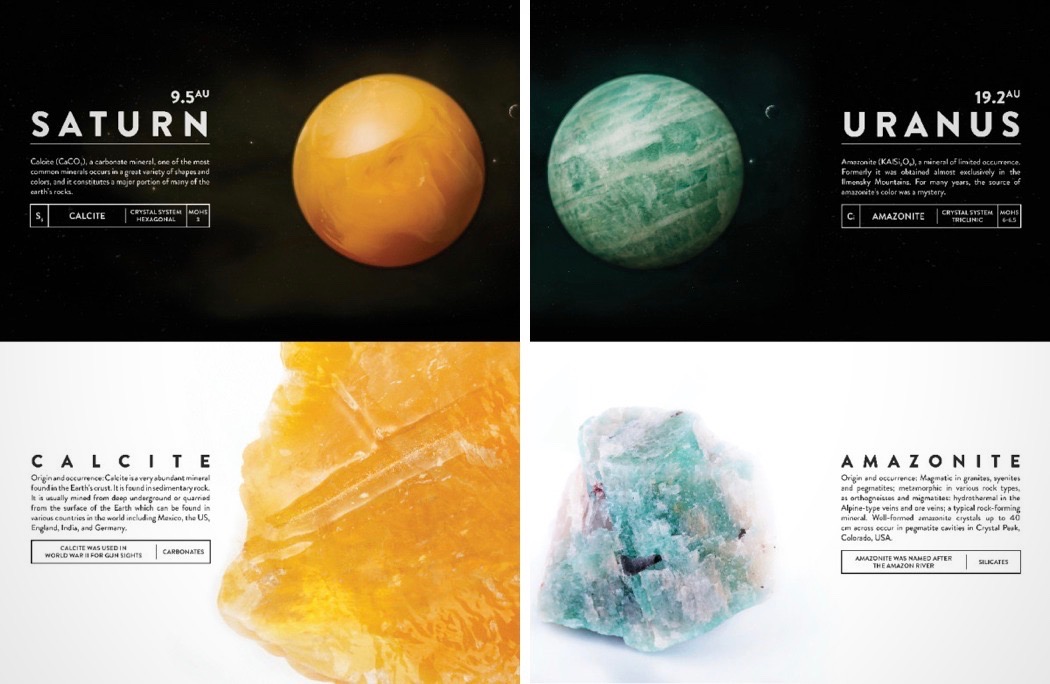 Calcite (CaCO₃), a carbonate mineral, one of the most common minerals occurs in a great variety of shapes and colors, and it constitutes a major portion of many of the earth’s rocks.

Amazonite (KAlSi₃O₈), a mineral of limited occurrence. Formerly it was obtained almost exclusively in the Ilmensky Mountains. For many years, the source of Amazonite’s color was a mystery. 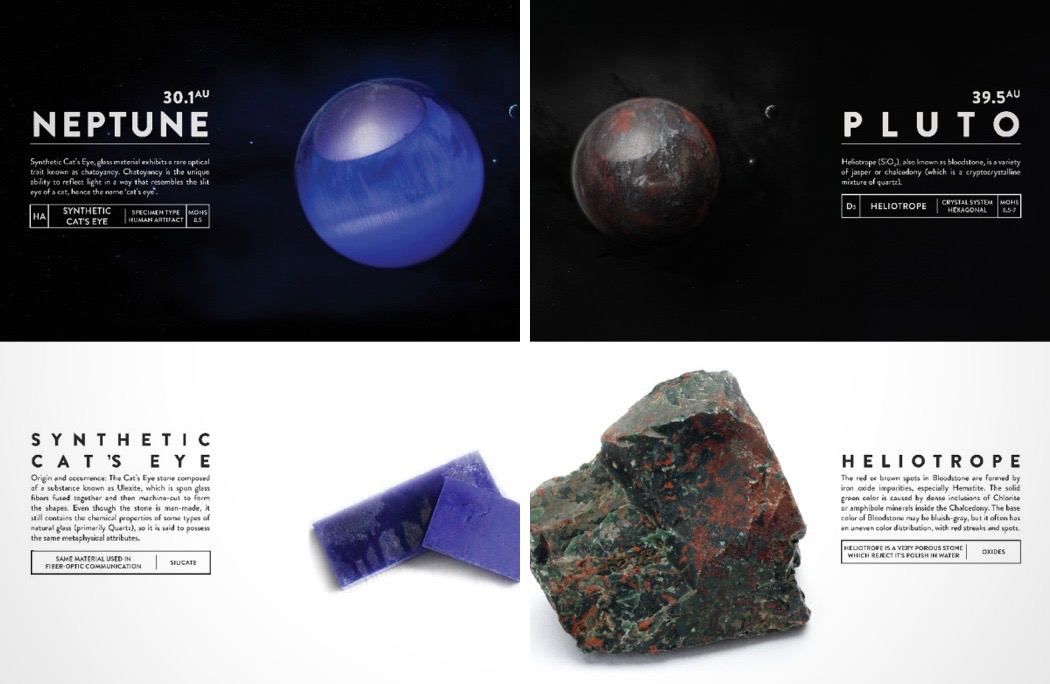 Cat’s Eye (BeAl2O4), a gemstone exhibits a rare optical trait known as chatoyancy. Chatoyancy is the unique ability to reflect light in a way that resembles the slit eye of a cat, hence the name ‘cat’s eye’.

Heliotrope (SiO₂), also known as bloodstone, is a variety of jasper or chalcedony (which is a cryptocrystalline mixture of quartz).

Before you paint me as an Apple Naysayer (and some of you will, I’m sure), I’m a proud owner of not one but TWO iPads…

Meet MagStick – a selfie-stick that also doubles as a tripod with a feature that sets it apart from the rest. With a MagSafe mount,…

A Perfume For A Man’s Man

The Xpress-PRO Has In-built Memory and Back-up Charging

A day in the life of You: Wake up, unhook the phone from the charger – shower – embrace the day – carry laptop, tablet,…