Adding a new dimension to photography is the Intel Capture180 Camera. Taking a tangent from the mega-pixel war, and data storage issues, the Capture180 Camera brings in the news with its Virtual Reality imaging proposal. It uses a 180 degree fish-eye lens to capture 180 degree hemisphere and stores the information as meta-data within each shot, allowing the camera’s viewfinder, a digital picture frame, or your computer screen to come alive with the images.

The 180 degree fish-eye lens captures quite a wide view of the shot.

The warped photos are unwrapped in-camera into a hemisphere of image, and everything outside of the traditional picture frame is stored as meta-data. When viewing photos, position sensors allow the camera’s viewfinder to act as a window into a still moment in time. If it’s a photo of fireworks, you can point the camera over to the left see the faces of the people sitting next to you- it’s like the camera never left the place. The extra meta-data also means that photos can be recomposed long after they’ve been shot. Photos can be cropped down or up, and this pretty much eliminates the need for the user to point. The whole scene is captured with each shot, and one or multiple photos can be composed from the scene later. 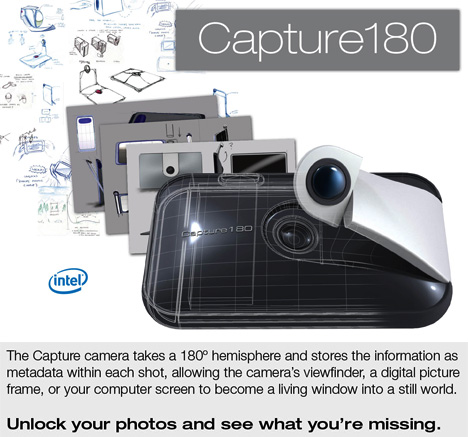 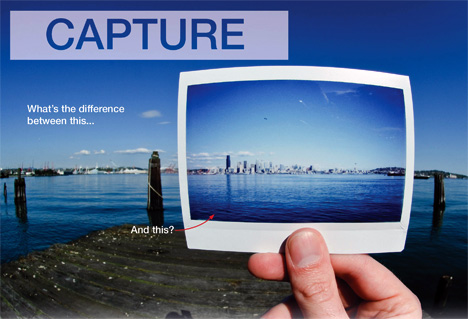 QWERTY Keyboard For iPhone, For Real!

I’ve always had a problem with typing fast and accurately with my iPhone, and like most Indian users who use local lingo in our English…

A turntable that doubles as an analog clock is a space-saving way to evoke nostalgia!

Nostalgia permeates throughout any room with a turntable or analog clock. But nowadays, any song from any artist can be played with the touch of…

The Scroll Bookshelf is one of the most basic ways of managing your books in a tidy fashion. A metal sheet covered with a plastic…

Wireless Electricity from a Bus Stop

This project aims to develop and simplify the operational logistics of electrically wireless public transport infrastructure. A new Bus Stop wirelessly charges up any electric bus…