I will preface by saying sometimes designers use their own language to communicate their ideas and quite often that language is so esoteric in origin, I find it hard to translate. Take for instance this table called Hide & Seek. It looks like a simple LACK table you’d find at IKEA but there’s more than meets the eye here. Hidden within it are removable drawers that can be used for display or serving bowls. You can even slip them into the wall to build a step shelf-like design.

Now here comes the esoteric part. The idea came from the need for human beings to find tools that retain harmony in space. The two pieces that make up harmony in space are aesthetics and functionality. If a design has none of or more of one over the other, the design is flawed. Thus the Hide & Seek Table looks great but also has multiple functions satisfying both sides of the equation. 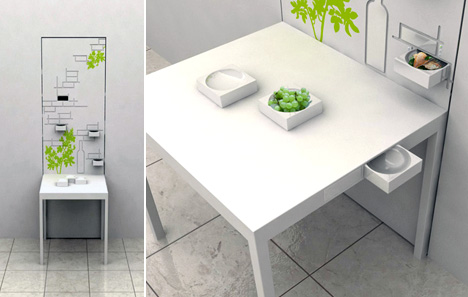 Yotel, the revolutionary new hotel concept that is redefining the global hotel industry, is today launching with 46 stylish cabins at Gatwick Airport – South…

This minimal desk’s special design element is inspired by pianos!