It is a soft mobile phone concept. The phone is encased in a flexible plastic housing. A soft polymer insert is located between the microchip module and the casing. You can drop it, bend it, sit on it, toss it around, and give it to Naomi Campbell to throw at her assistant without detriment.

A flexible display (a 2,75-in. diagonal, a 433 × 266 pixels) and the keys are located on the surface. The display itself looks like paper, but the ink incorporated in it can change its position when affected by electric signals. This process called “electrowetting” is so quick that you can even display video. And it’s not a fairytale technology either. The display was developed by Robert Hayes and Johan Feenstra. They better patent that ASAP. 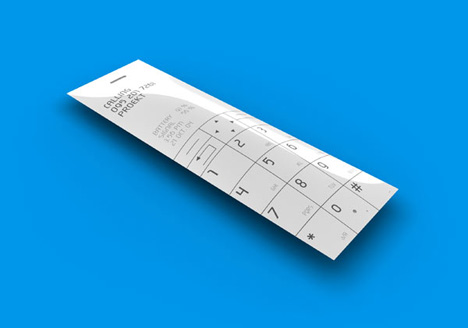 Say hello to the Rollerphone concept! At first glance it’s merely a wrist band that projects time, much like the Alessi Concept we saw earlier,…

I always get bummed about trying to hook my USB stick the wrong way; such a simple thing and yet so frustrating! Amends are being…

Choosing a mouse or a controller to use with a computer can be a personal endeavor. It doesn’t have to be one size fits all,…