This project aims to design a better and more natural way of being woken than the alarm clock, which is a very violent and intrusive method that disrupts sleep patterns and can induce a ‘fight or flight’ reaction. The ‘glo pillow’ uses an integrated fabric interface for setting the alarm. The time is displayed on the surface of the pillow using an LED grid inside the pillow. The user goes to sleep and passes through the five sleep stages to REM (rapid eye movement) sleep. Forty five minutes before the alarm is due to activate, the pillow begins to glow. The light intensity increases gradually from 0 lux to 250 lux and simulates a natural sunrise. At the set time the light emitted is sufficient to wake the body naturally – a positive and calming start to the day. Using light rather than sound to wake encourages the body to establish a healthy sleep rhythm, and make the day more productive and stress free. The pillow layers include an outer cover made from 100% cotton, a second layer of thin netting, a third layer of foam batting to cushion and disperse LED light, a fourth layer of an LED woven substrate developed by Phillips, and a fifth layer of 5lb density visco-elastic memory foam. Six SOFTswitch TM buttons control all of the pillow’s functions. A battery indicator glows green when the pillow is charging, and red when it needs charging. The pillow is charged by induction – the pad rests on the bed below the pillow and charges when required. This allows the pillow to be wireless and move freely about the bed. As well as using the interface, the clock can be activated by pulling the entire control panel away from the pillow – this is for easy activation in the dark. 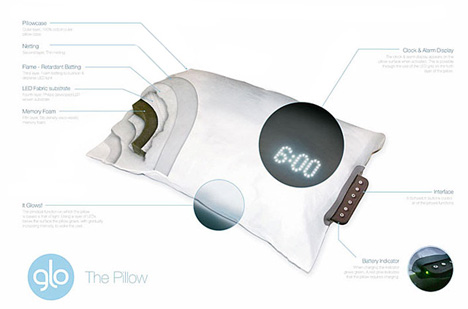 Four is a very stylized multi-touch AMOLED device that hangs on your wall, providing pretty pictures and sounds with a dash of functionality. The 145…

Chances are you’ve bumped a toe or two searching for the light switch in the middle of the night. Not fun! A total toe-saver, the…

The Swiss Army Knife of Suitcases

https://www.youtube.com/watch?v=O23ISH8Fd0w Now, Moto Z smartphone owners can really put their camera to task when they pair it with a Polaroid Insta-Share Printer! This ultra-portable peripheral…