Alexander Pelikan was born in Germany. He has lived in Eindhoven since 2001, where he completed his bachelor studies at the Design Academy Eindhoven in 2006. In the same year, Alexander established his design studio Pelidesign. In his project ‘Plastic Nature’, Alexander shows a paradoxical fusion. In a way, the paradox is already revealed in the title of the project: synthetic material and nature are not supposed to make a good match. In this particular furniture series, however, a true symbiosis has taken place: the ingenious design of the construction of plastic combined with wood enables both materials to complement one another seamlessly, allowing the full splendour of their properties to emerge. 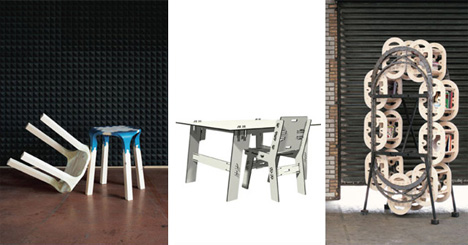 Portable electric vehicle charger with cable coiled up is the fast + convenient way to charge any EV!

The global electric vehicle market is expected to grow up to about 34,756 thousand units by the end of the decade. However, the popularity of…

Long before it became a fad to hire interior designers to do up your rooms, humble folks just rearranged their furniture to give their home…

Cleaning Up The Wire Mess

OMG, not another electrical gadget at home…where do I plug it…too many extension cords, wires, plugs, hassles! Does this thought often bog you down? It…