The “with a pinch of salt shaker” emulates the gesture of putting “a pinch of salt” in a meal. The user simply slides the halves of the shaker, as if handling the salt directly. As the halves slide past each other an opening is formed, out of which the salt is disposed. This gives the user a lot of control over the amount of salt released. When the shaker is not being used, the salt is protected from moisture – and as such the salt remains dry and crisp, as is waits to be used in the next meal. 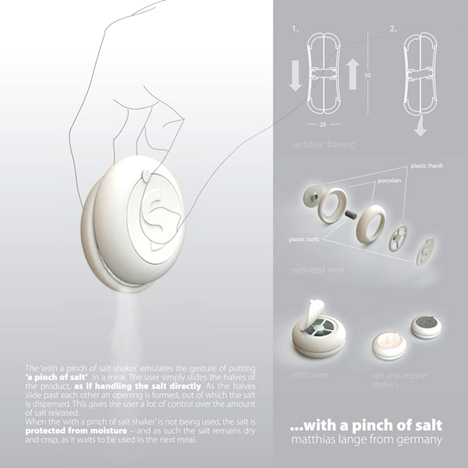 If you’ve ever heard the phrase “to call a spade a spade” before, what this cutlery set does is quite the opposite. Designed with a…

A space-saving work and workout setup designed to keep your mind & body healthy!

Argo’s watch face feels like looking into the nighttime sky

https://www.kickstarter.com/projects/gravithin/argo-a-watch-with-unique-design-and-mythological-soul The Argo watch manages to capture the childlike joy of looking at a starry sky as well as use the sky and stars as…

The following project is one with far fewer hard specs than it has big notions about how the future could be. This project is not…