Daylight in a room gives a feeling that the space you are in, is lager that the physical room. A sign of something beyond the four walls of the room. The concept is targeted for a Scandinavian user-group. In Scandinavia, long periods of the year has a limited daylight. A Danish report shows that there’s only 7-10% of the Scandinavian population that is not affected by daylight. When daylight in a room is removed, the feeling of space decreases, and the contrast between outdoor and indoor increases. For some of us this can give a feeling of closeness, to be alone or lonely. A social block. The idea is to create an unconscious feeling of an expanded room, through an illusion of natural daylight. The concept is to create a blurred window. A dynamic recreation of daylight by creating artificial shadows from objects outside of the physical room.

The idea is that the user can have a complete interaction through a computer with the dynamics from changing the light colour, the amount + speed of the shadows, to setting a time to be woken by daylight. The effect is created by the individual dimming of several light, placed in a net behind a semitransparent surface. 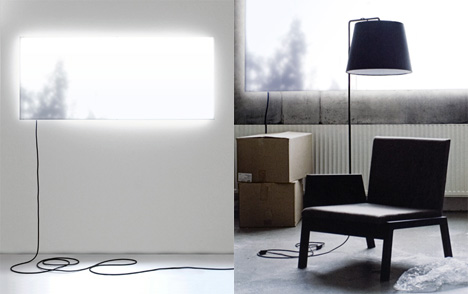 Inspiration can come from the most unexpected places. For designer Hoang Nguyen, it came from Orwell’s “1984”. He noticed similarities with modern social networking. Abstractly,…

Hidden is an unconventional litter box conceptualized to be inconspicuous by design and fit into any modern home. The hardest part of owning a cat…