Each watch is also meticulously sent to space and retrieved back onto planet earth before being sold to consumers. If there was ever a timepiece with an incredibly interesting backstory, this is it!

Designed by the incredible folks at Col&MacArthur (who’ve also crafted wristwatches for the Royal Guards serving Her Majesty the Queen Elisabeth II), the “LUNAR 1969” watch goes where no watch has gone before. Made for the hardcore space lover, each watch is designed as an homage to the Apollo 11 lunar mission, comes with an authentic lunar meteorite rock (tested and certified by the Lunar and Planetary Institute) embedded in its dial, and once the timepieces are made, customers are given the option of having them sent into orbit before being brought back onto land. After all, it isn’t really a space watch if it hasn’t been to space, right?! 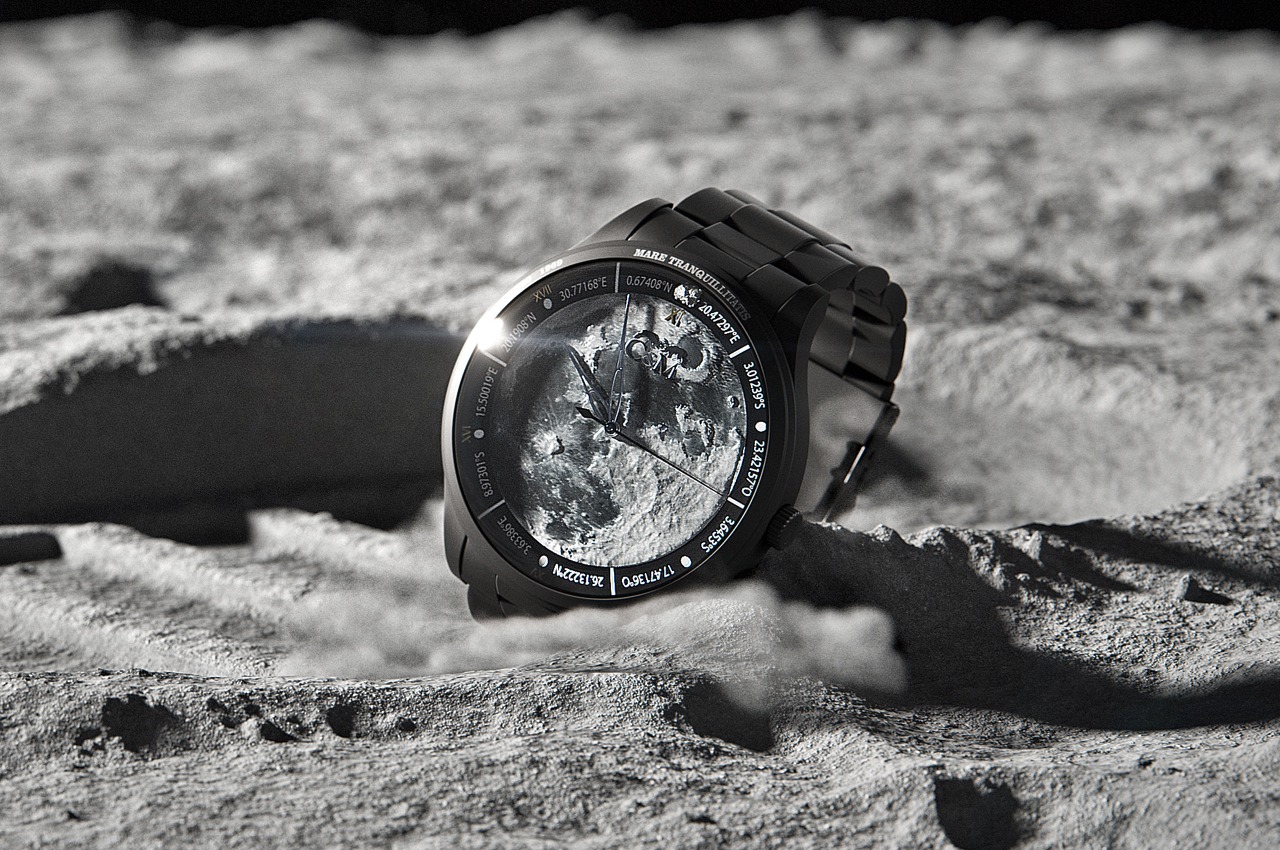 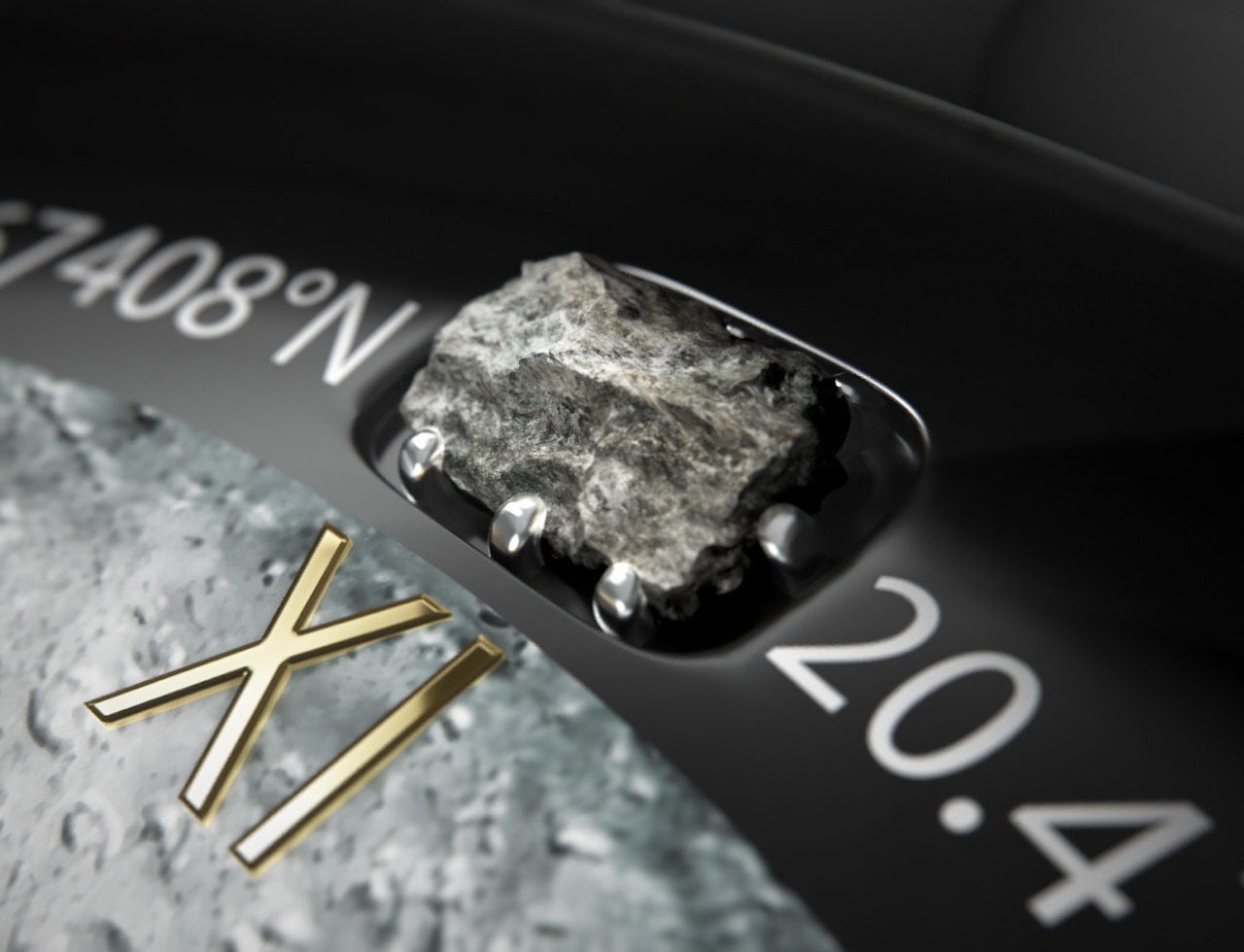 Lunar Rock Fragment – A fragment of a lunar meteorite is set at 12:00 p.m. – with a certificate of authenticity indicating the origin of this meteorite.

With a glorious rendition of the moon’s mottled, textured face on the watch’s massive dial, looking at the time almost feels like staring right into space. The dial, aside from the large moon on it, feels stunning to look at. It commemorates 6 of the Apollo missions with their coordinates engraved onto the dial, and at the 12 o’clock position, sits the watch’s magnum opus, its authentic and certified moon fragment that crashed onto Earth thousands of years ago. If that wasn’t incredible or rare enough for even the most die-hard space aficionado, the watches also come with the option of being launched into space for a brief amount of time before being brought back to earth. Sure, it would cost hundreds of thousands to take yourself to low-earth orbit, but for as little as just 500 euros, Col&MacArthur will give your watch a taste of space, before allowing you to wear it on your wrist. That story should never grow old at dinner parties! 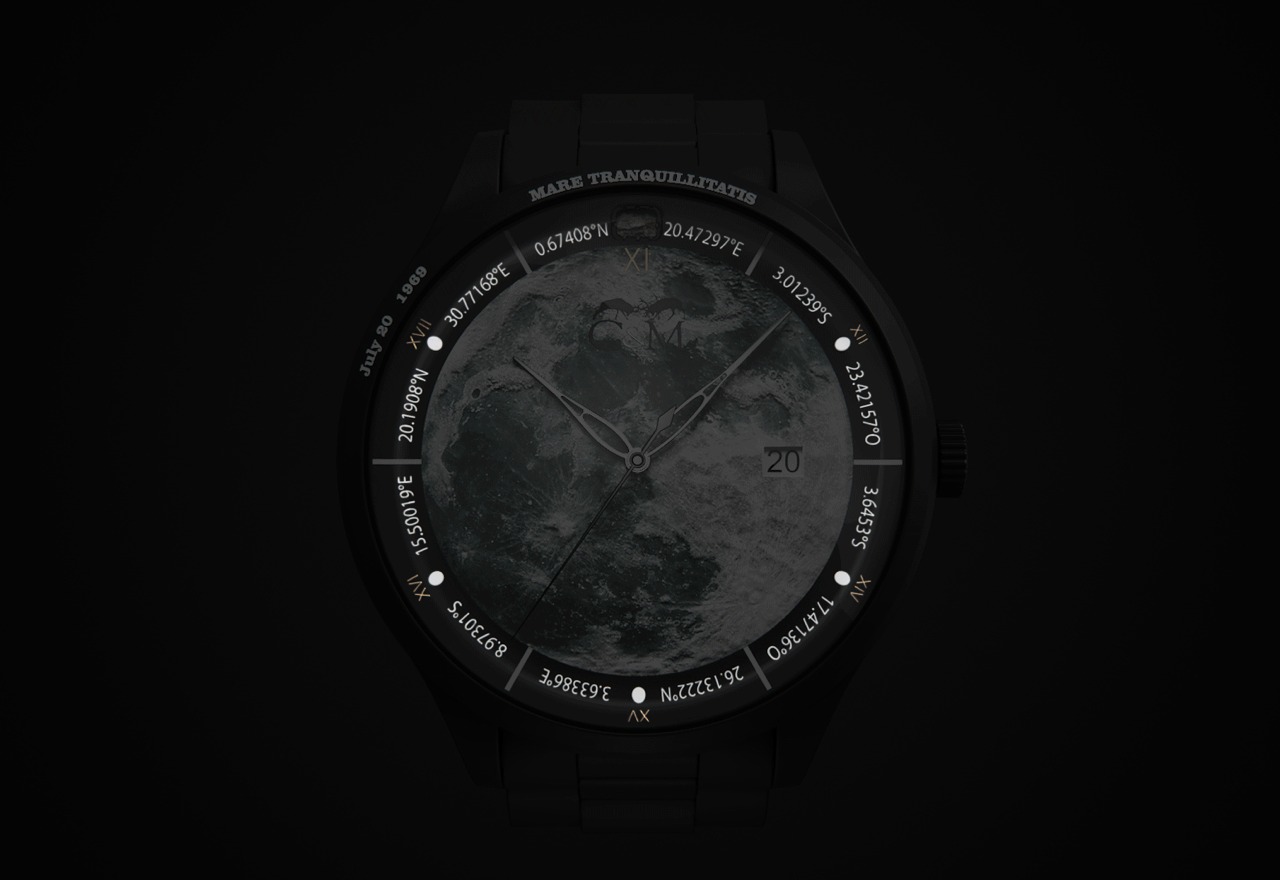 GPS Coordinates of Apollo Missions – The geographical coordinates of the 6 Apollo missions that landed are inscribed on the dial. 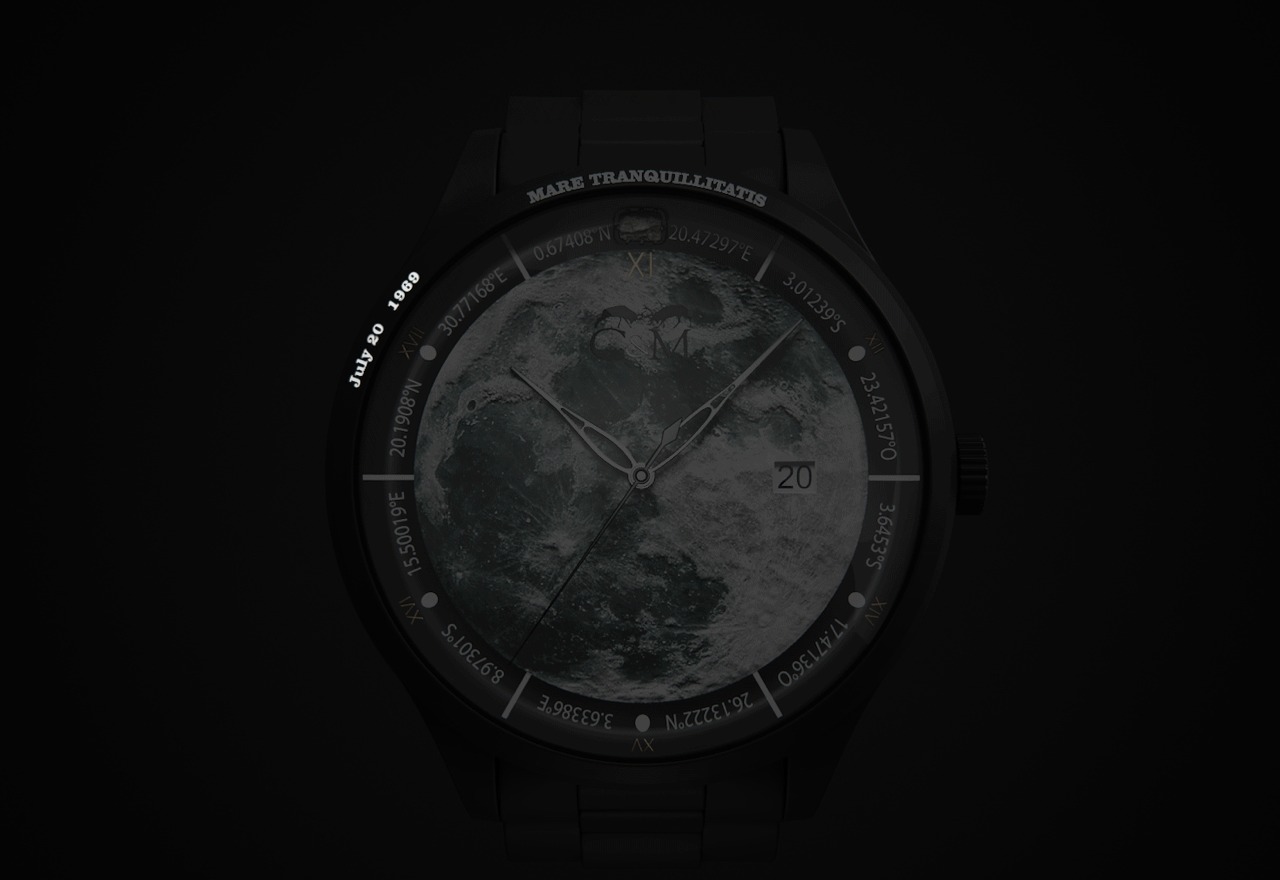 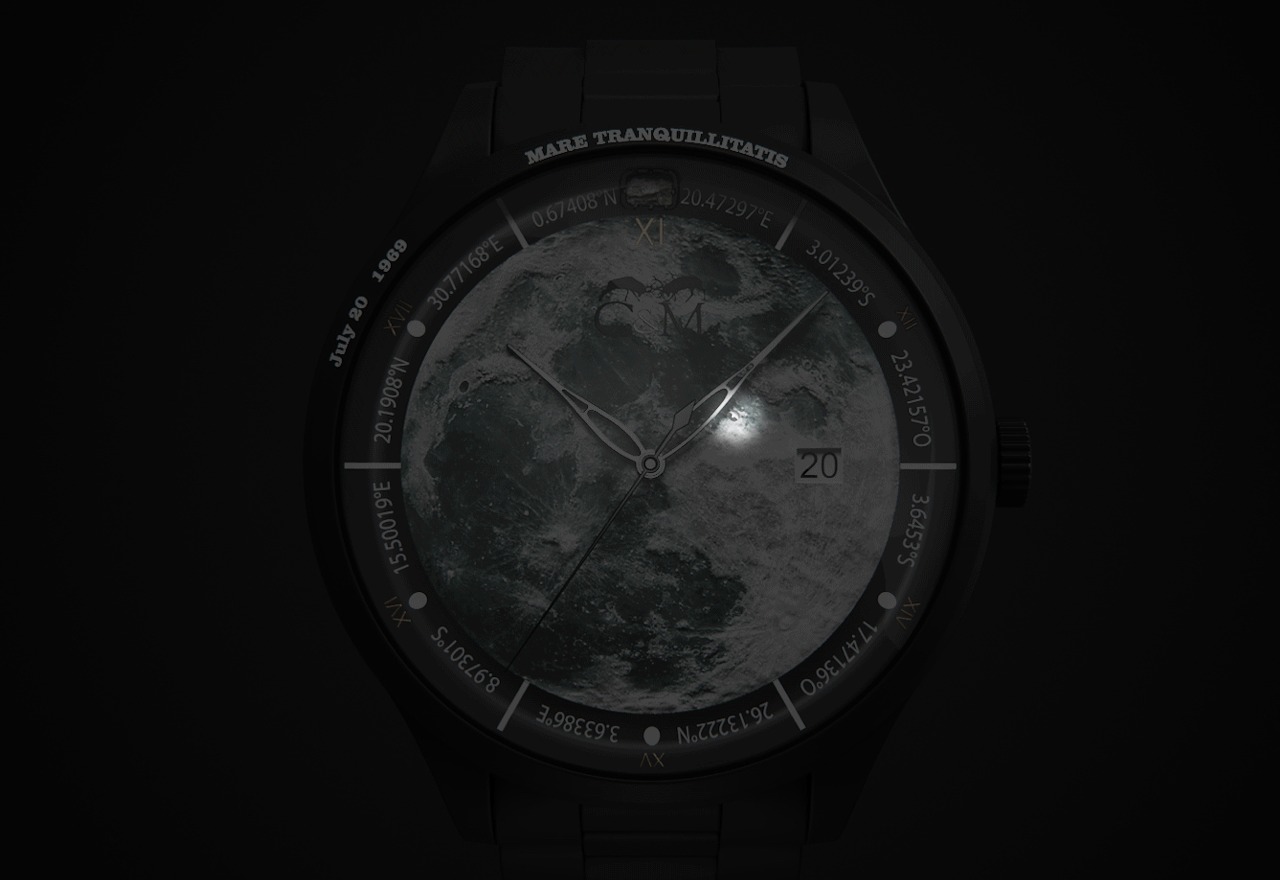 Landing Site – On the lunar surface, a bright point indicates the location of the first step on the Moon. 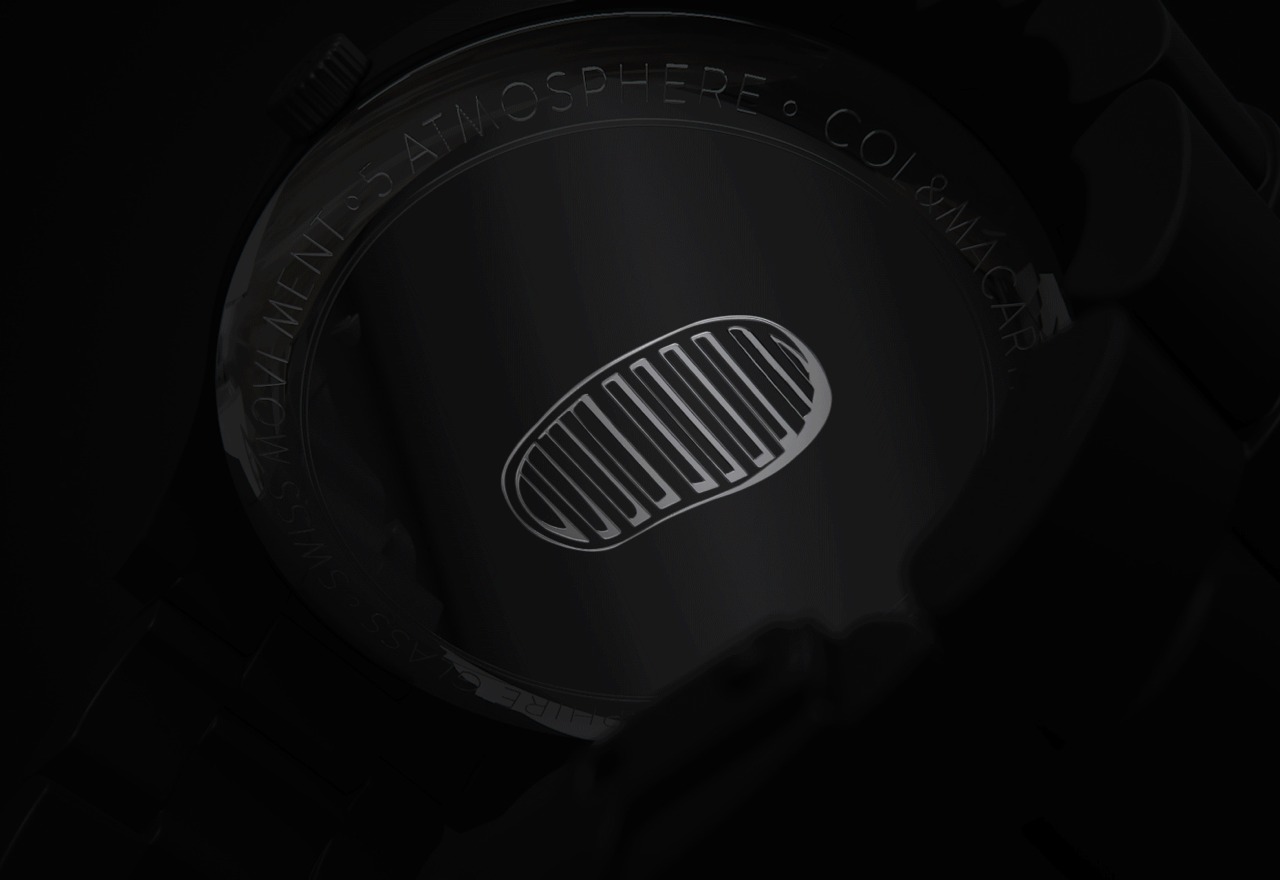 Engraved Impression – The imprint of man’s first step on the moon is engraved on the case back, paying homage to the explorers of space.

To say that the “LUNAR 1969” celebrates space really feels like an understatement, given that every corner of the watch is a visual ballad to all our lunar missions. The watch comes with coordinates for 6 Apollo missions around the dial’s periphery, and even when you flip the timepiece over, there’s an engraving of the iconic ‘first step’ footprint by Neil Armstrong on the exhibition back which lets you also see the watch’s movement. 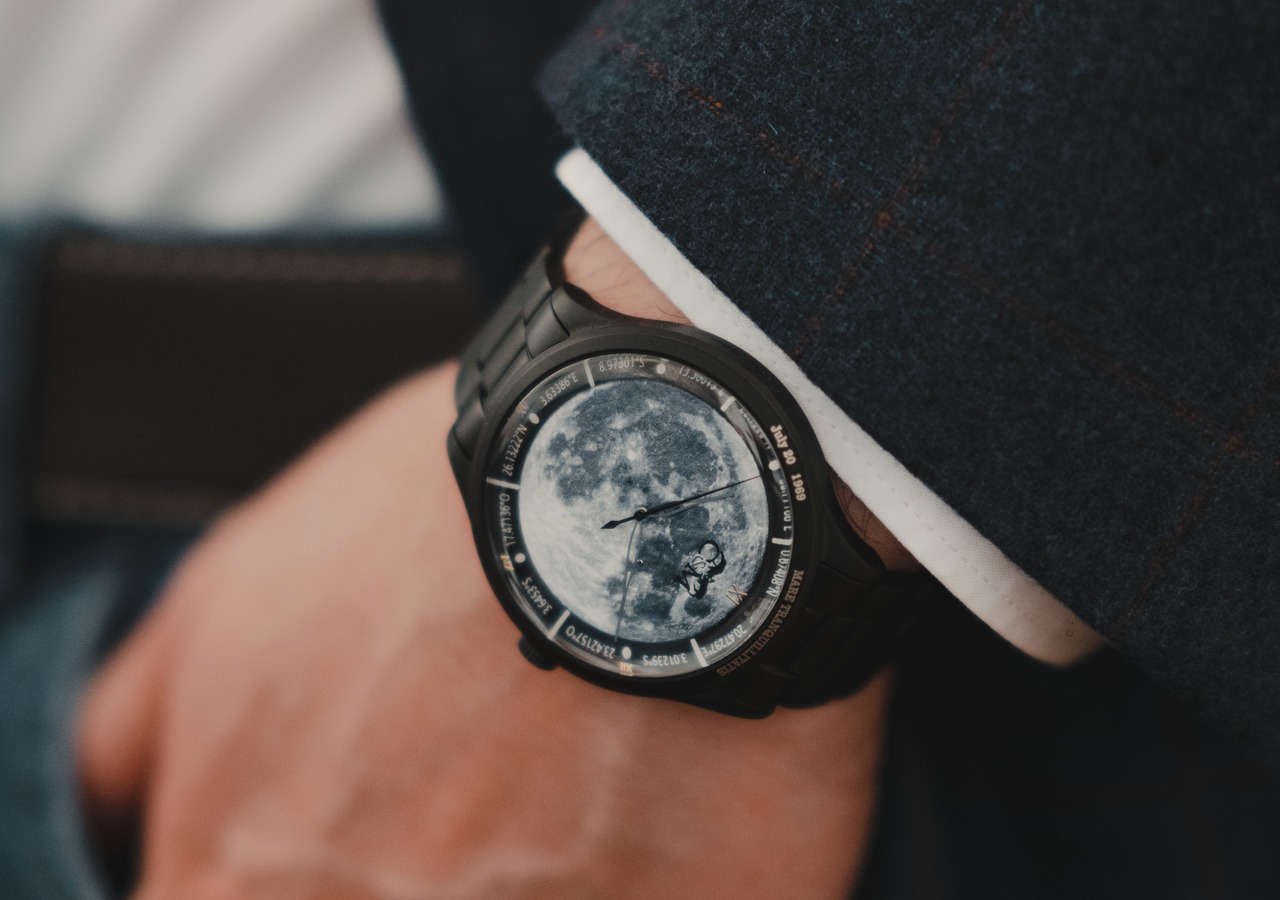 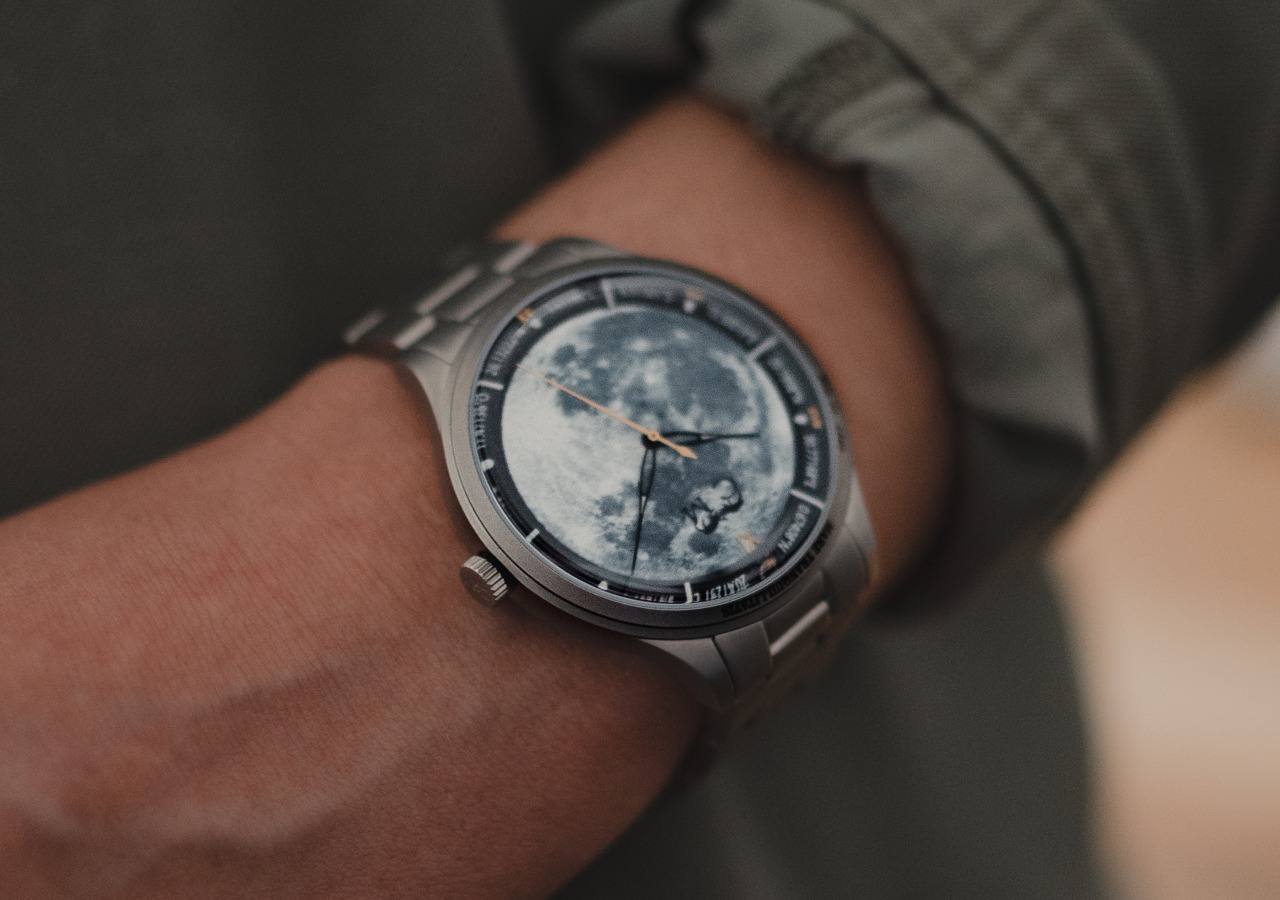 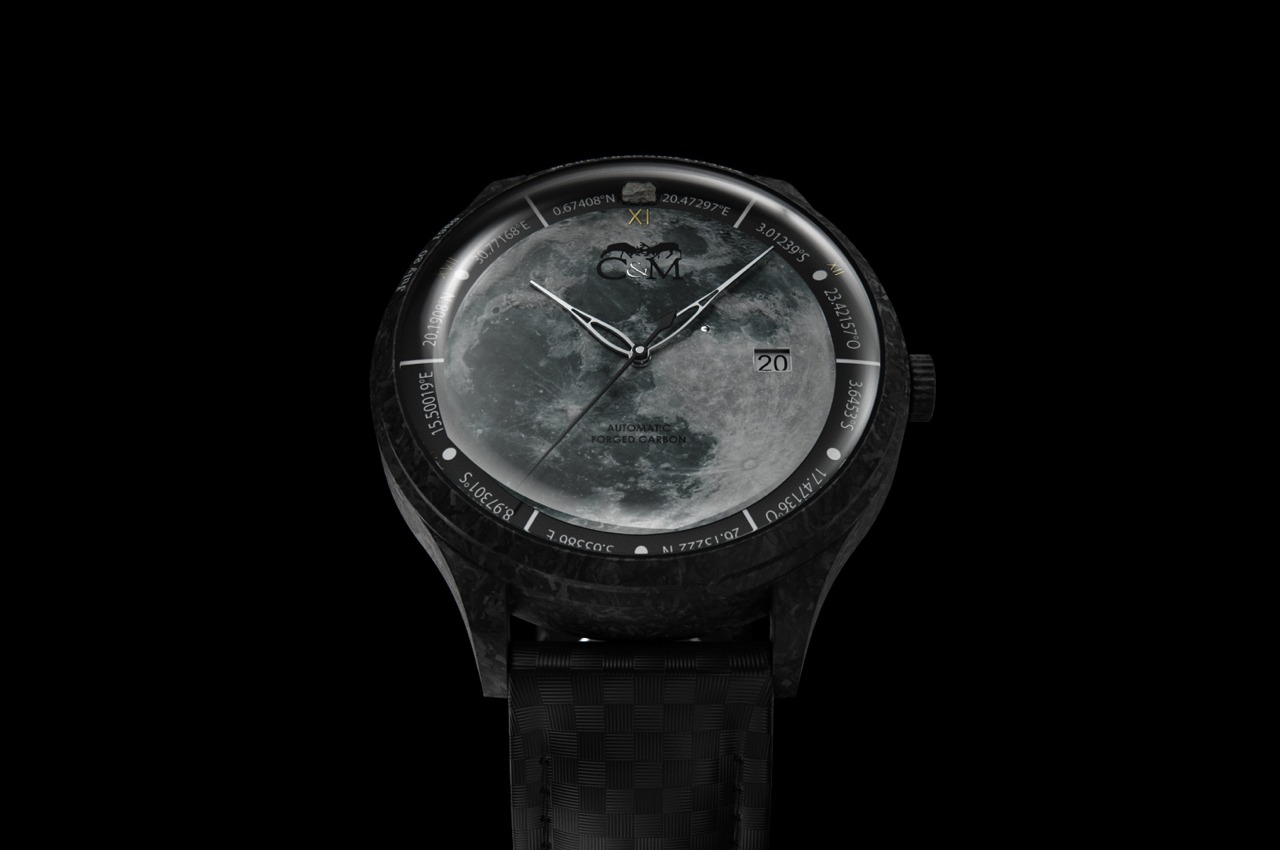 The “LUNAR 1969” is available across multiple styles, with choices between Quartz or Sellita Automatic movements (both made in Switzerland). Even though the automatic variants are limited to just 200 variants (while the quartz models boast 1969 units each), you can grab timepieces forged from either steel, titanium, or even elusive forged carbon fiber. The Steel and Titanium models are offered in white or anodized black metal finishes, while the Carbon variant has its own uniquely speckled, mysterious-looking finish. 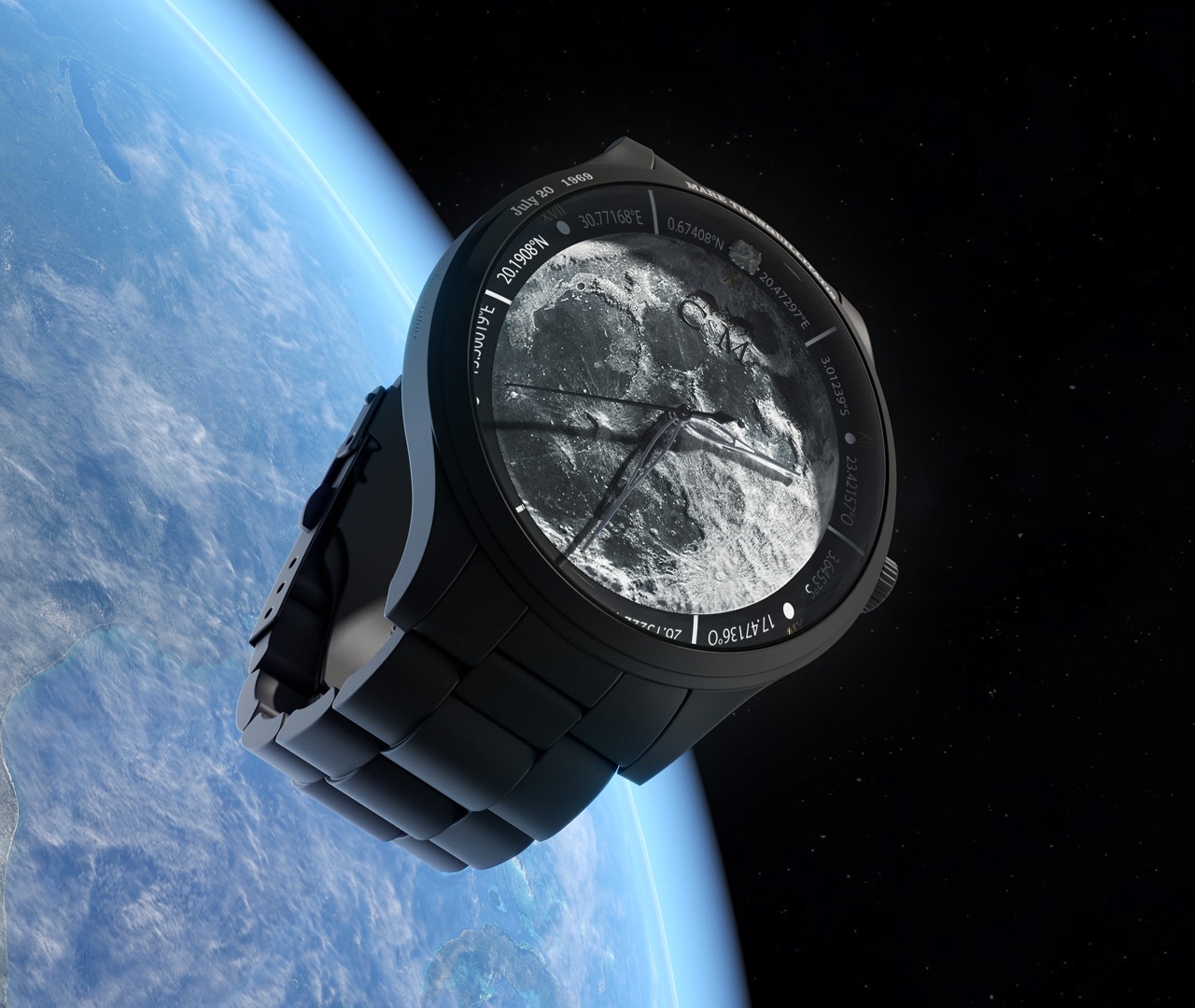 Although the “LUNAR 1969” remains a stunning piece, it also falls well within Col&MacArthur’s broader ethos of keeping their premium watches available and affordable to all enthusiasts. The watches start at $429 and go up to $2,106 for the carbon variant, with the ability to procure additional upgrades like steel or carbon straps, personal engravings, or even your own bespoke serial number. You can have your watch sent to space for an additional $518, or opt for the premium flight package that also includes a video recording of your watch being sent to space for a substantial $1,555.

This is going to get a little hippie and spiritual so hold on. It’s common to focus on emotions while ignoring or having any awareness…

Inspired by the JetLev Flyer (pictured with operator), a flying machine that uses high-pressure water columns to generate thrust, the Rescue Pack is a comparatively…

If the shape looks familiar (maybe even scary!), it’s because the Paraboloid Lamp takes the striking shape of the hyperbolic geometric surface you probably saw…

Klipsch is challenging European designers to visualize products for their iconic heritage line!

I go on and on about design competitions, but honestly my motivation as an Industrial Designer myself is truly just one simple thing. Seeing my…