Dubbed the “Tribute to Great Civilisations” series, they cover four of the most significant civilizations in human history, with watch faces depicting Ancient Egypt, the Persian Empire, Hellenistic Greece, and the Roman Empire.

Coming from high-end watchmaker Vacheron Constantin and Paris’ Louvre Museum, the Métiers d’Art watches pay tribute to some of the most iconic masterpieces from these civilizations, stored at the Louvre. For the designers and craftspeople at VC, the challenge was a little more than just building another set of watches. These timepieces had to capture the grandeur of an entire civilization. To that end, each watch is stunningly detailed, with tiny intricacies carved, painted, inlaid, and assembled by hand. They look and feel nothing short of priceless, and are a stunning example of why Vacheron Constantin has been a formidable name in the watchmaking world for over 260 years.

Designer: Vacheron Constantin (in collaboration with The Louvre Museum) 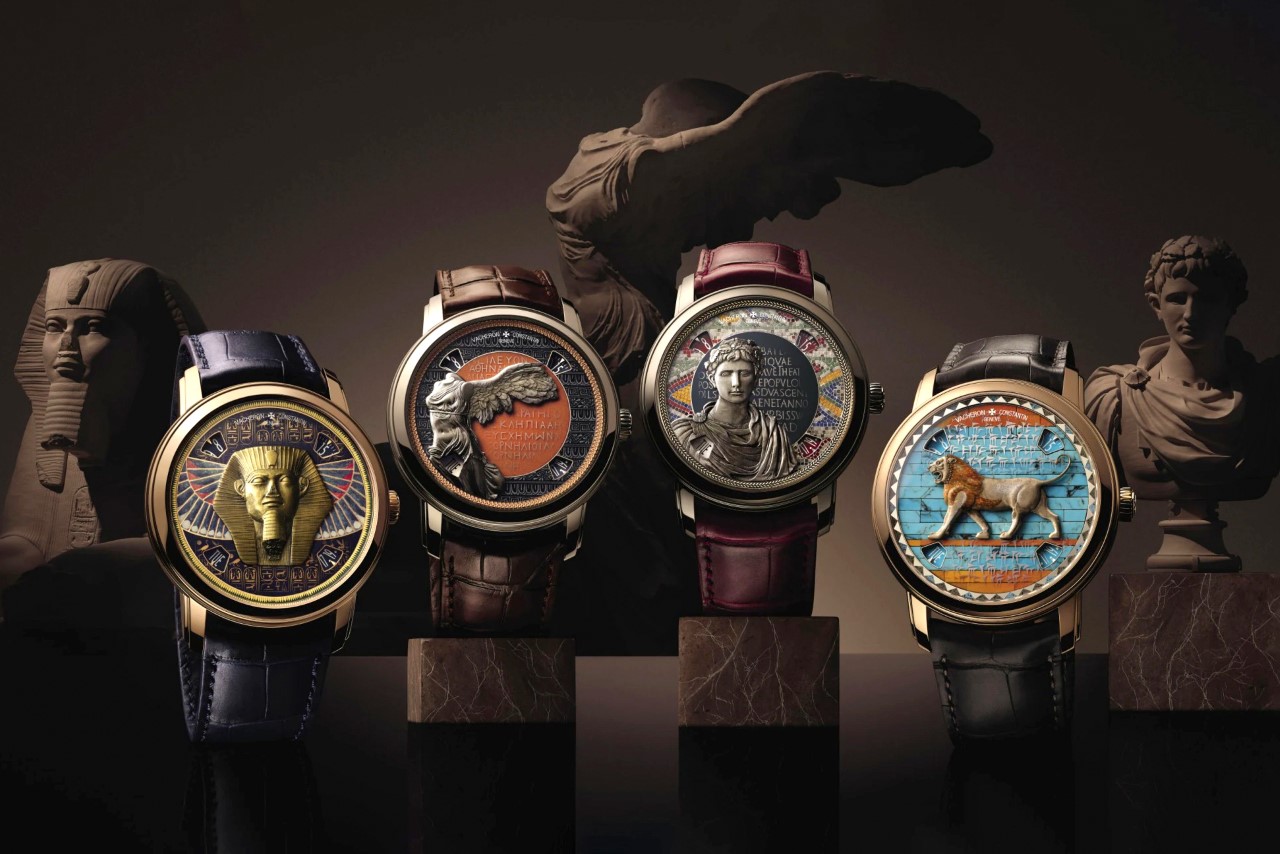 Each watch feels like a relic in the way it’s composed – a testament to Vacheron Constantin’s sheer craftsmanship. All four watches are powered by Vacheron’s self-winding Manufacture Calibre 2460 G4/2, a unique movement that lays the hours, minutes, day, and date out on four corners of the watch, leaving the central part free for the watch’s magnum opus, its painstakingly hand-made artpiece. The lack of a traditional movement also makes sense, ensuring that no moving or ticking hands distract from the sheer beauty of the watches. The four artpieces (from left to right) are the Sphinx of Egypt, the statue of Victory of Hellenistic Greece, the bust of Octavian Augustus from Julius Caesar’s Roman Empire, and the Lion relief sculpture from the palace of Darius in the Persian Empire. 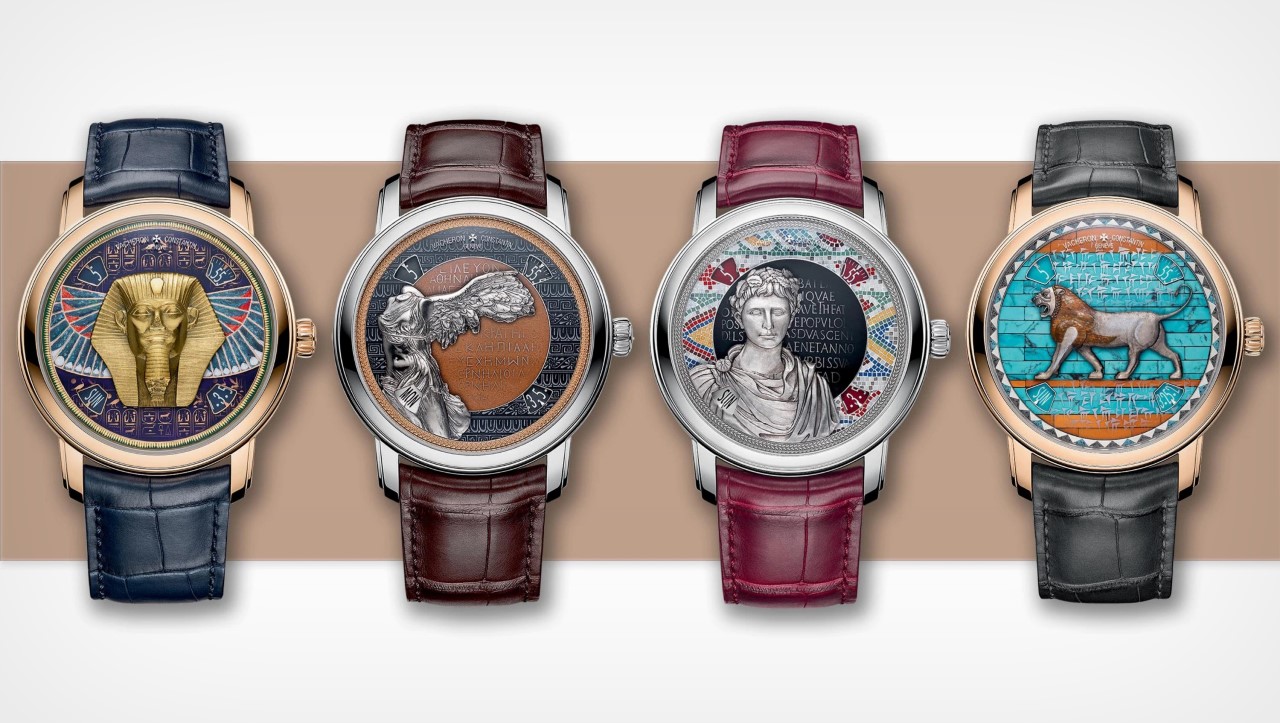 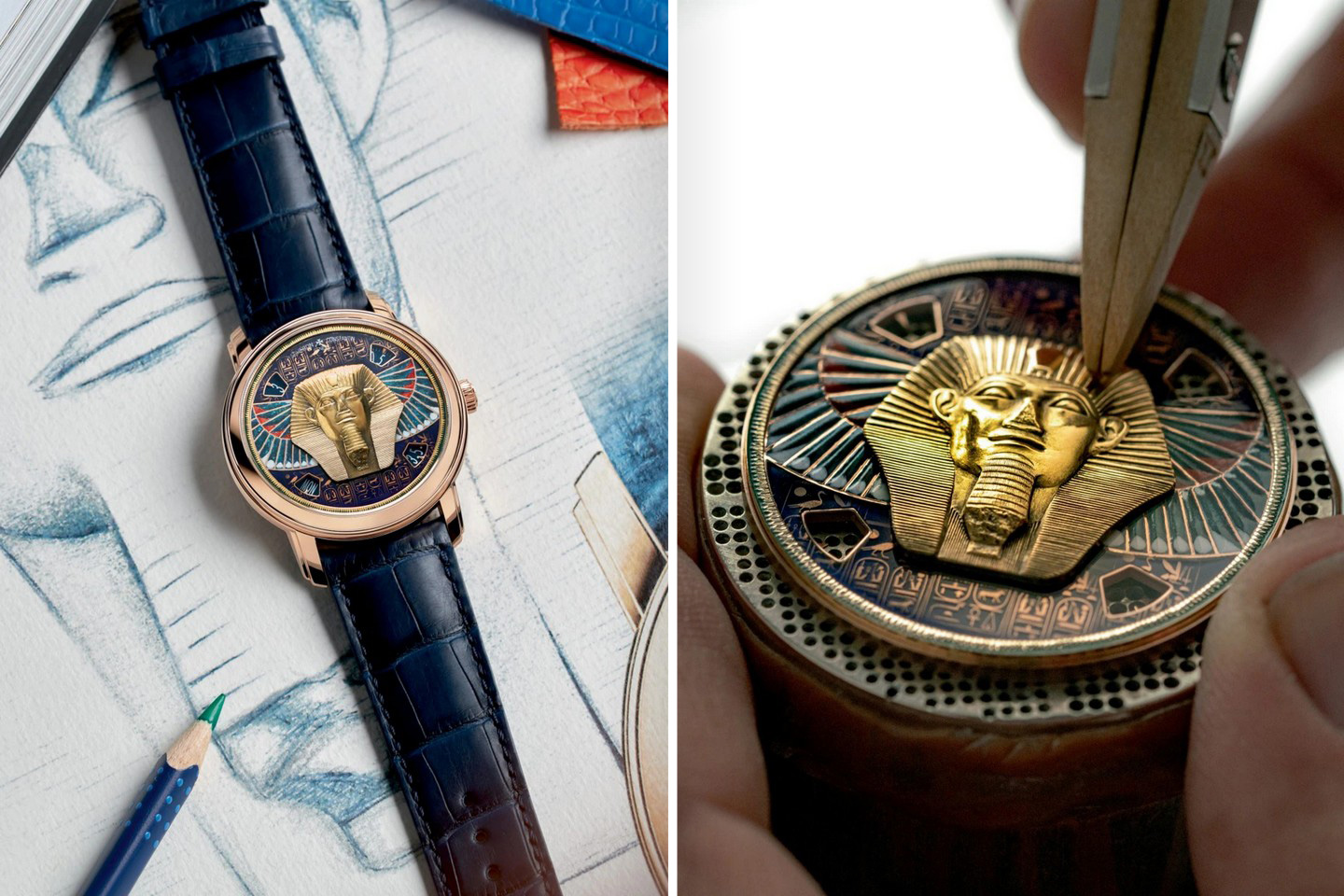 The Sphinx of Egypt is easily the most famed and recognizable relic of the four. The Louvre famously is the home to one of the largest sphinxes outside Egypt, acquired in 1826 as part of the collection of the British consul Henry Salt. For the watch, the face actually houses a relief replica of the sphinx, meticulously carved from gold. The gold applique sits on a stunningly detailed enamel dial, fired 6 times in a kiln to look as deep and rich as it does. As a signature flair, the watch is topped off with a sapphire crystal cover that has metalized hieroglyphic inscriptions on it. 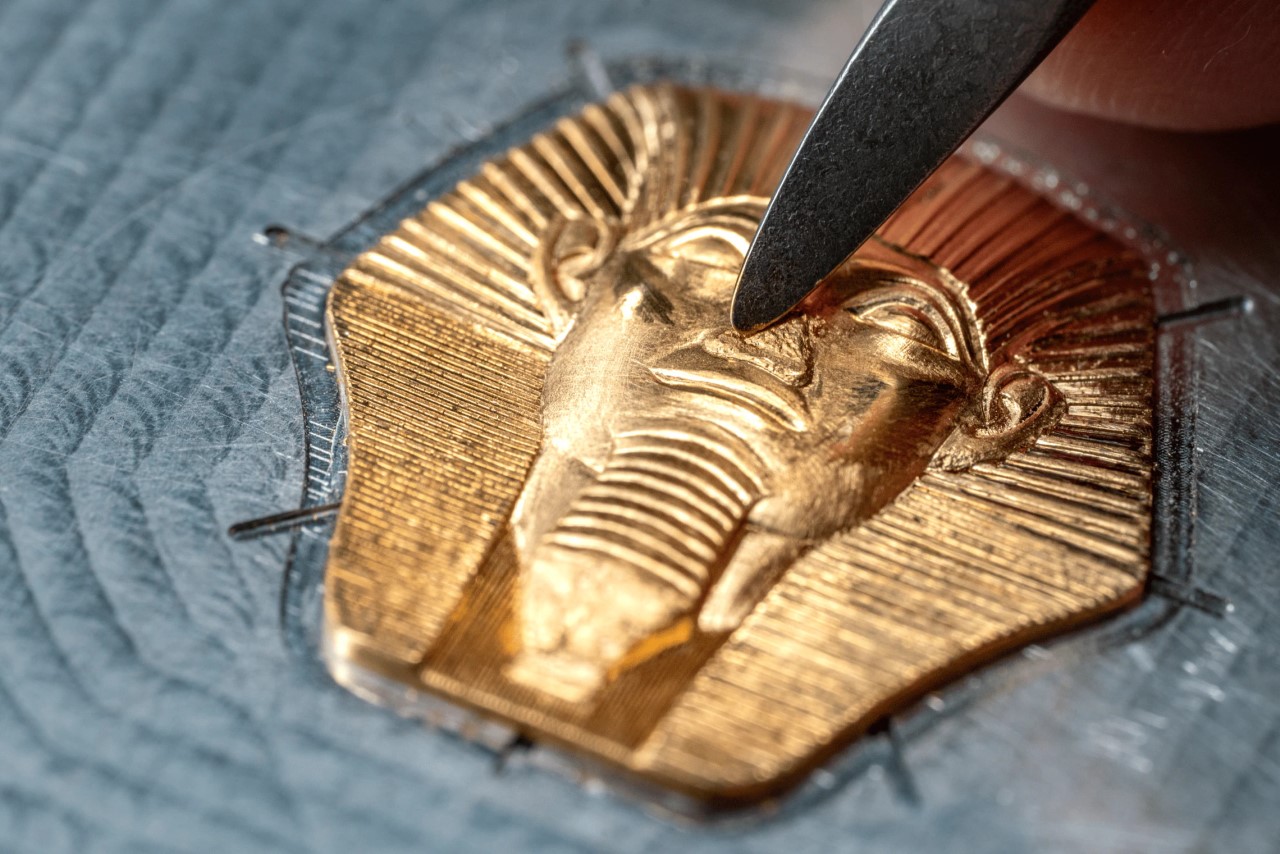 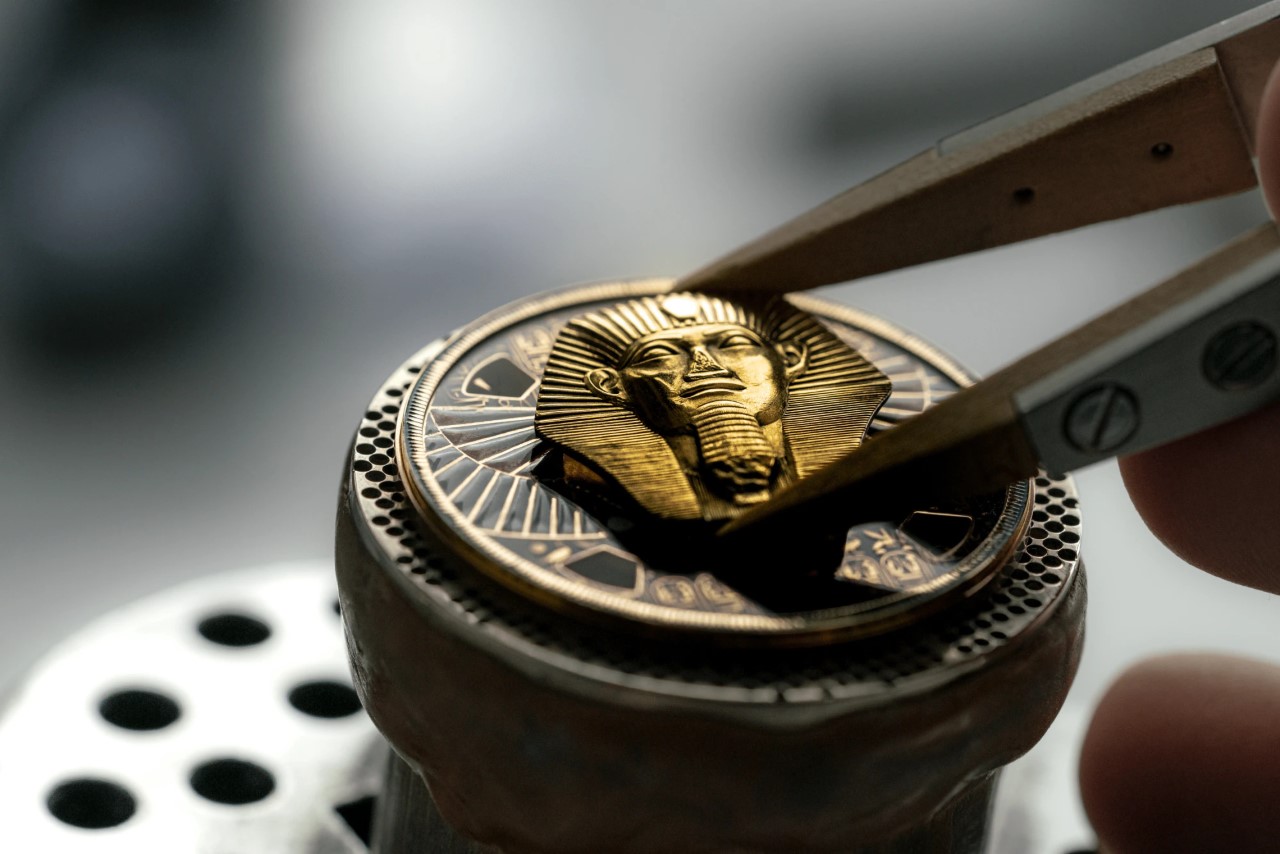 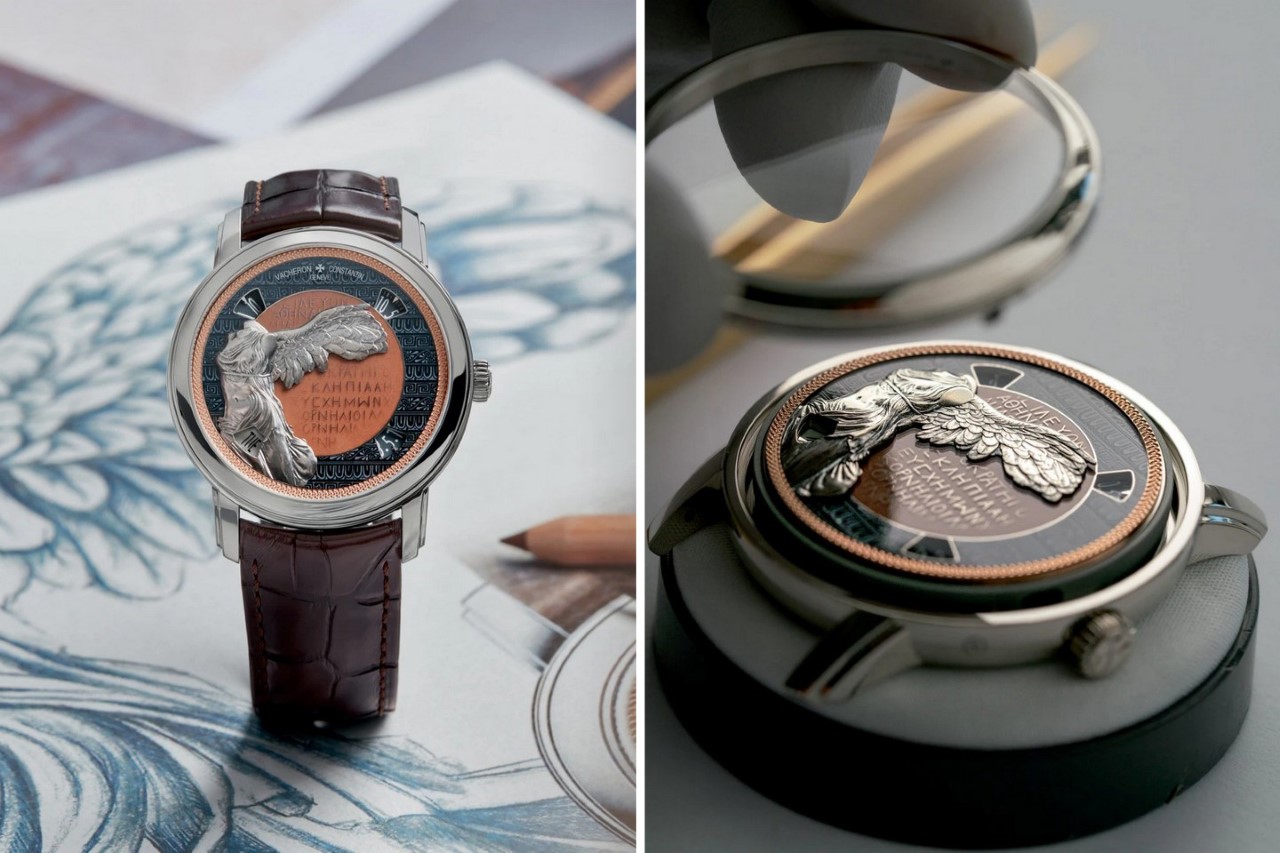 The Hellenistic Period represents the time between the fall of Alexander the Great and of Cleopatra. This period was characterized by a new wave of Greek colonization which established Greek cities and kingdoms in parts of Asia and Africa. The relic for this period is the tatue of Victory, a winged goddess resting on the prow of a warship, was discovered in 1863 on the island of Samothrace in the northern Aegean Sea. Excavated from a sanctuary dedicated to the Great Gods, it depicts an offering linked to a naval victory. This statue sits at the center of the dial, complete with all the minute details including the feathers on the wings and the folds and pleats in the statue’s fabric garb. The statue sits on top of a main dial that’s enamelled in brown, a colour that is very difficult to achieve and required a mixture of rare enamels as well as six firings in the kiln. 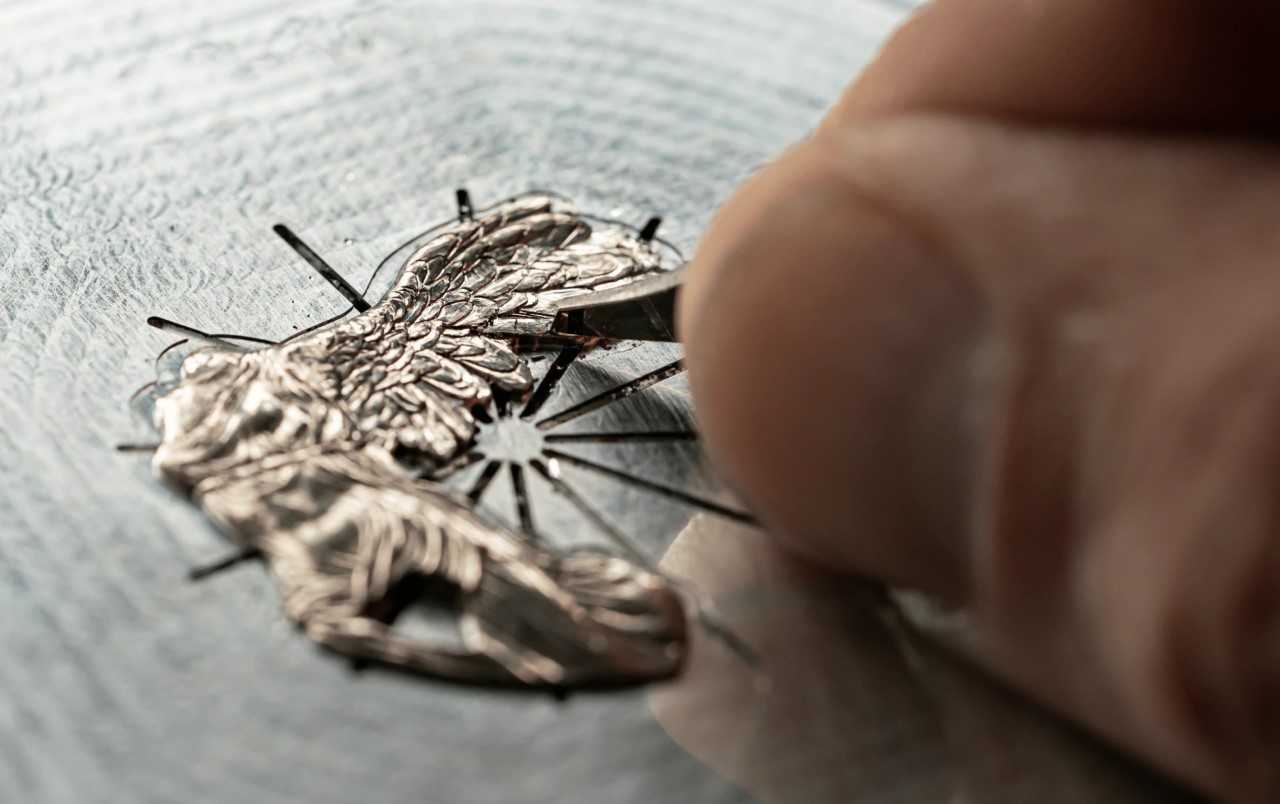 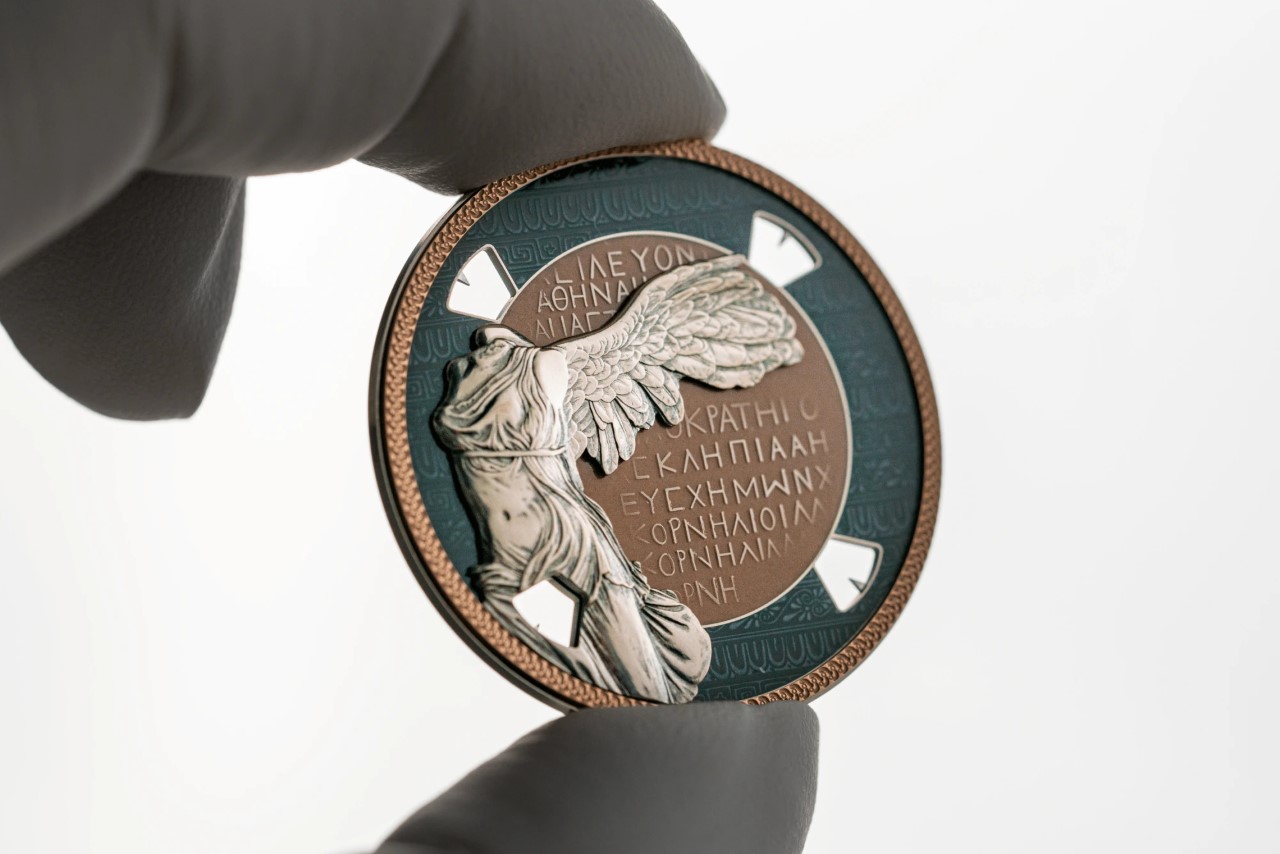 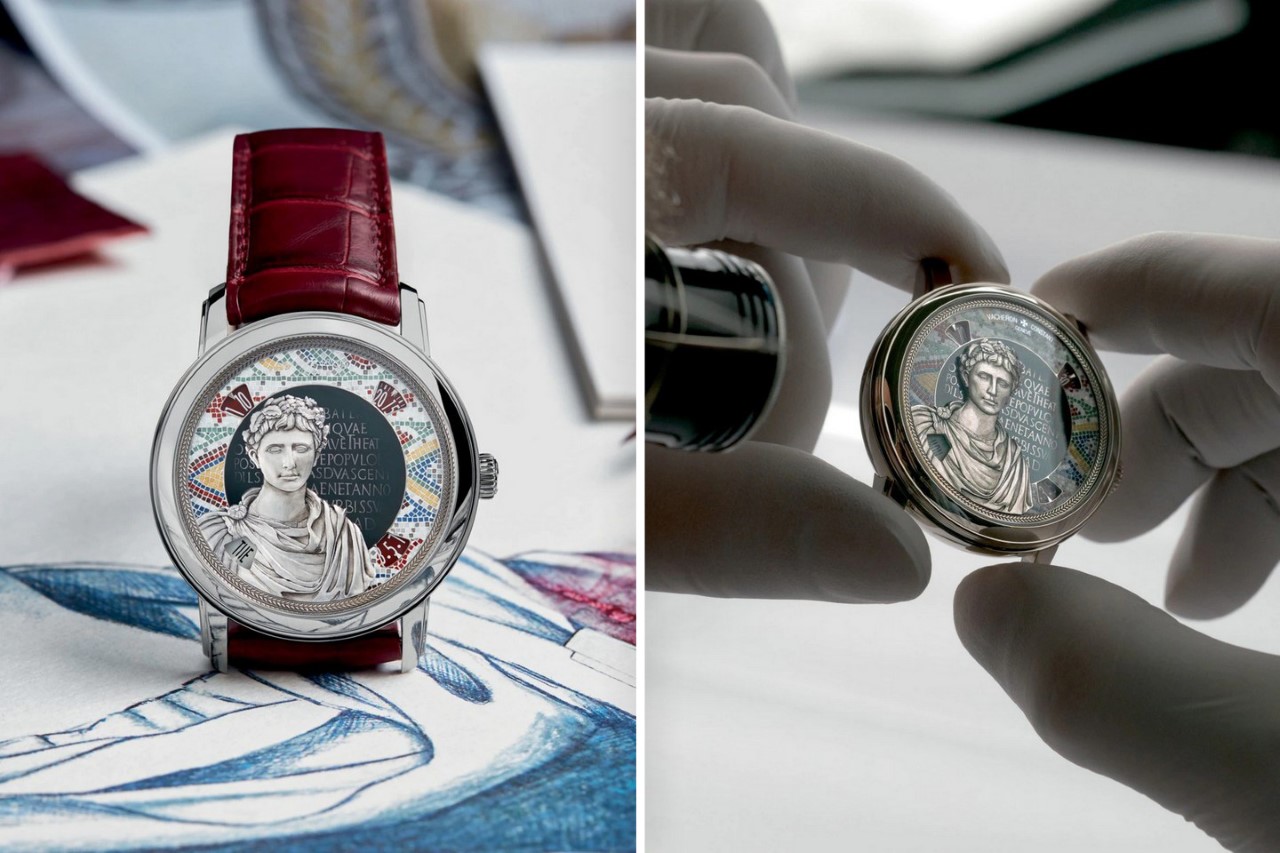 The bust of Octavian Augustus, the adopted son of Caesar, represents him crowned with an oak wreath, a distinction awarded him by a Senate decision in 27 BC, when he became the principate of Rome. For Vacheron Constantin, creating this particular artpiece was exceptionally challenging, especially around the rim, which houses an intricately assembled micro-mosaic. No less than seven different types of stones – 660 in all – were used to compose this micro-mosaic. The mosaic, however, merely guides the eye to the carved gold applique of the Buste d’Auguste, complete with a draped cape, accompanied by the breastplate and secured by a fibula, and even flourished with an oak crown around which Augustus’ locks of hair meander. 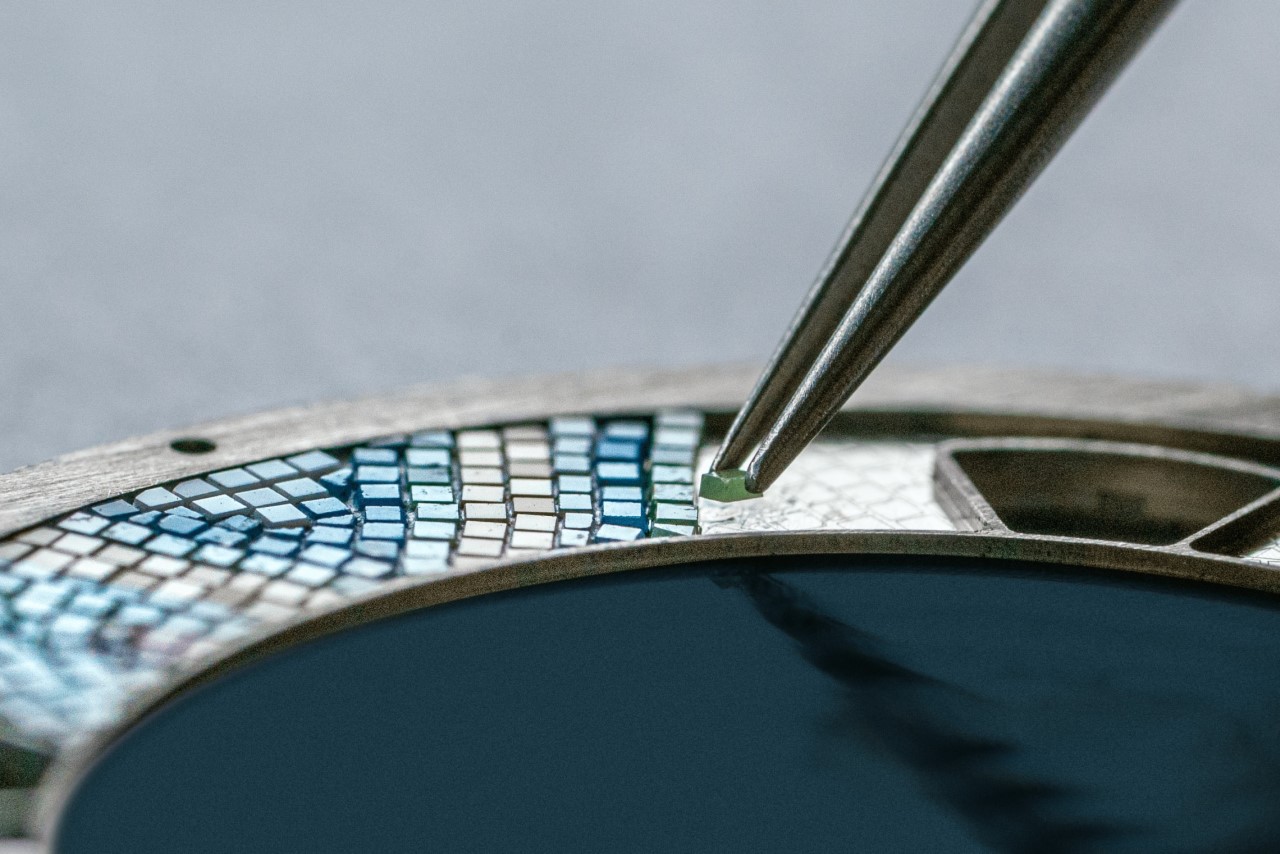 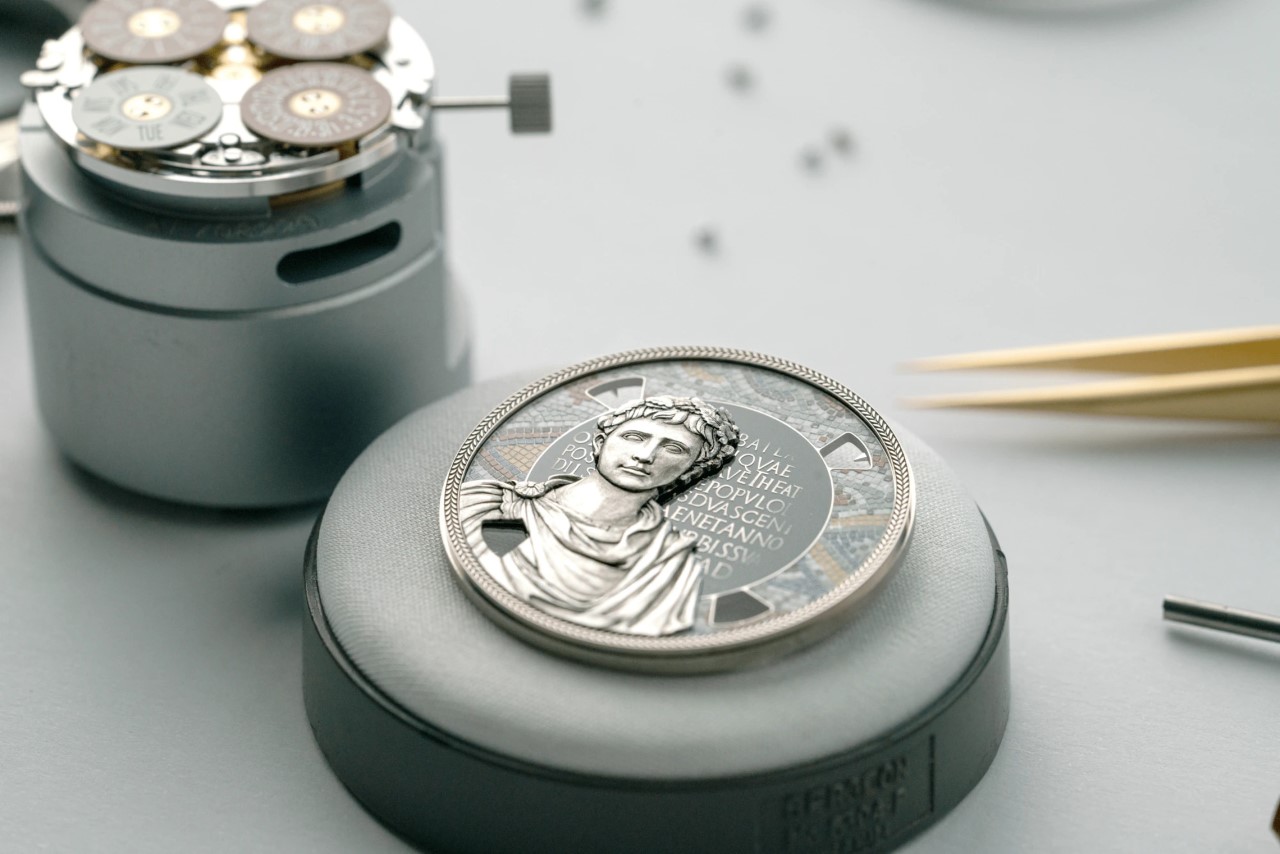 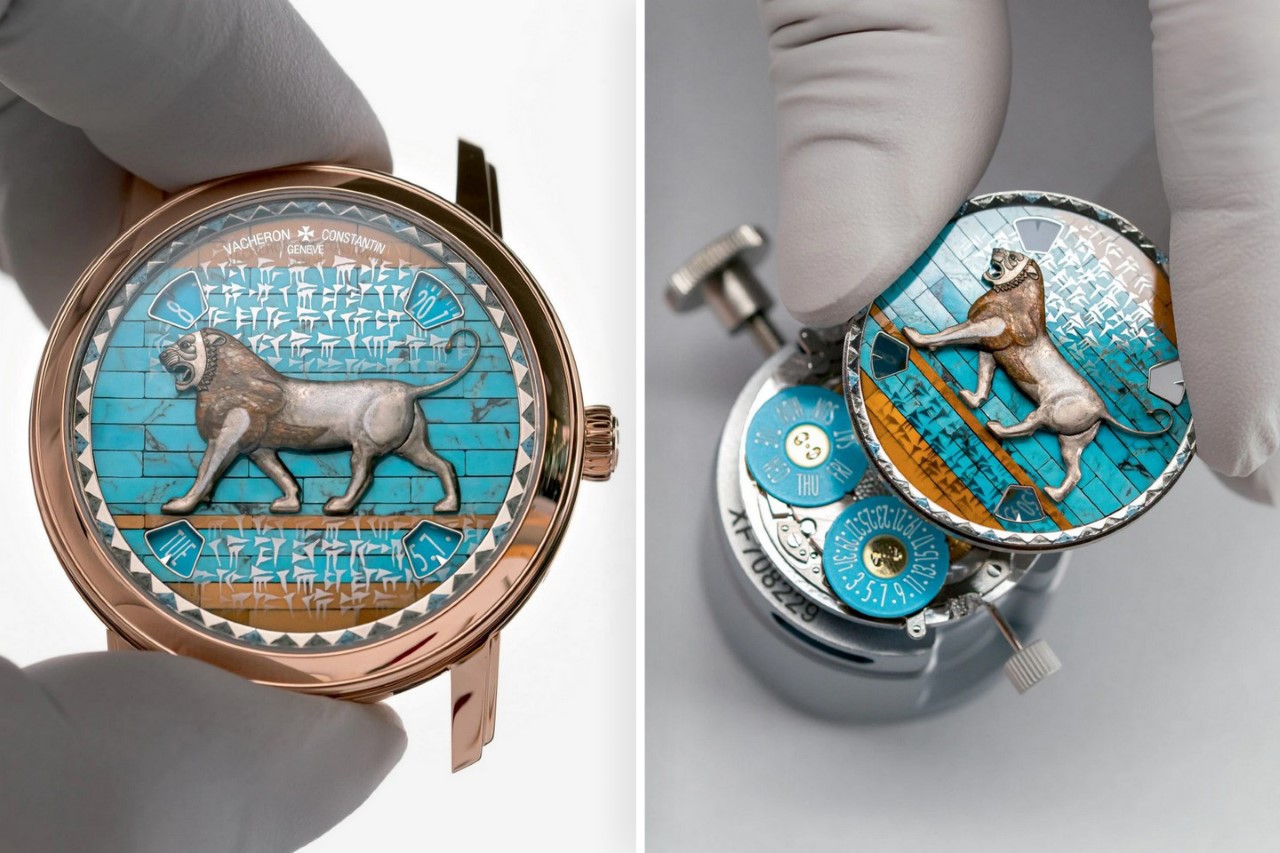 The final artpiece takes us to the Persian Empire of the Achaemenids (559-330 B.C.). With a territory stretching from present-day Pakistan to the shores of the Black Sea, and from the steppes of central Asia to Egypt and Libya, it united the oldest civilizations in the Middle East. The Frieze of Lions, a glazed brick decoration, was located in the first courtyard of the palace of Darius the Great in Susa. Practically an icon of the empire, the ‘Lion de Darius’ finds itself on this timepiece. The hand-carved lion sits on a stone marquetry background, representing the decoration of glazed bricks affixed to a wall. The writing elements engraved by metallisation on the sapphire crystal are one of the first written texts by Darius upon his arrival in power. 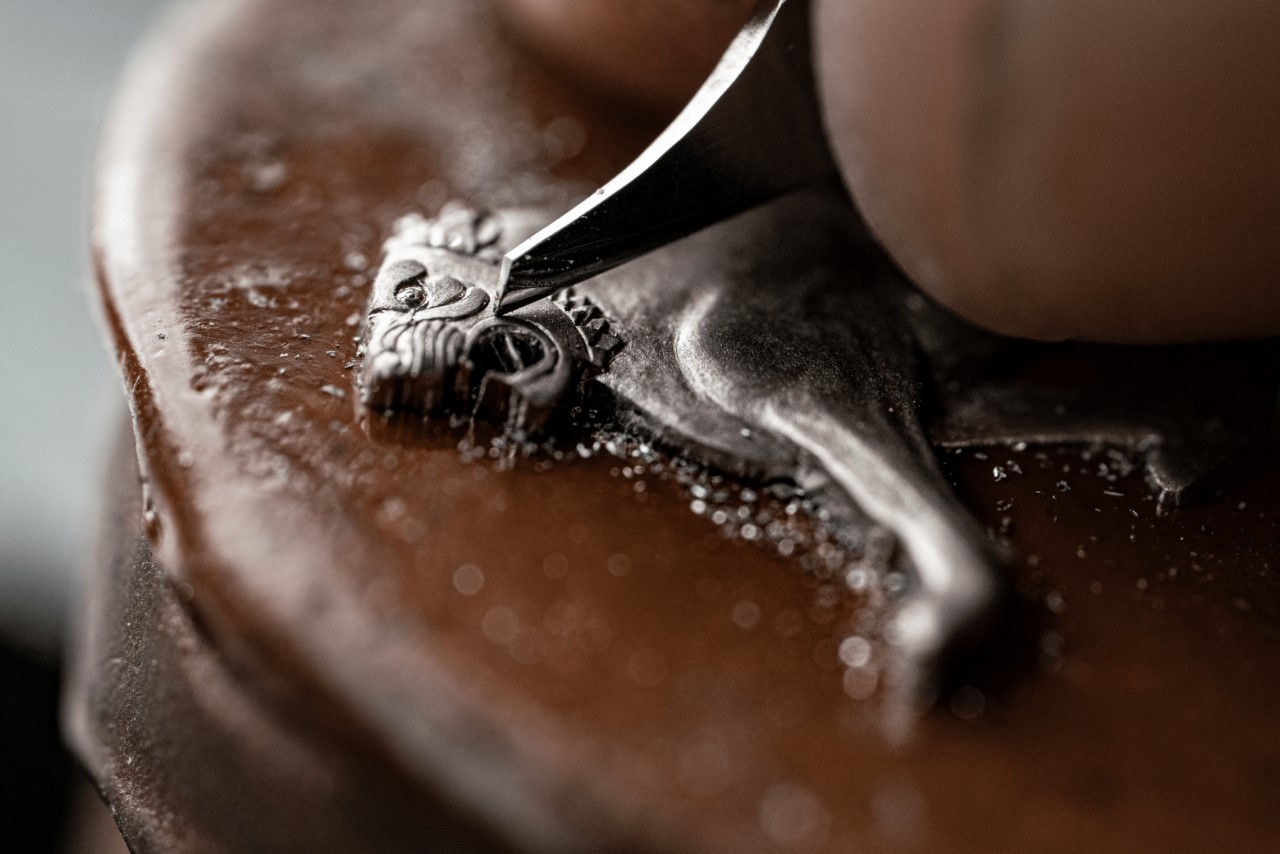 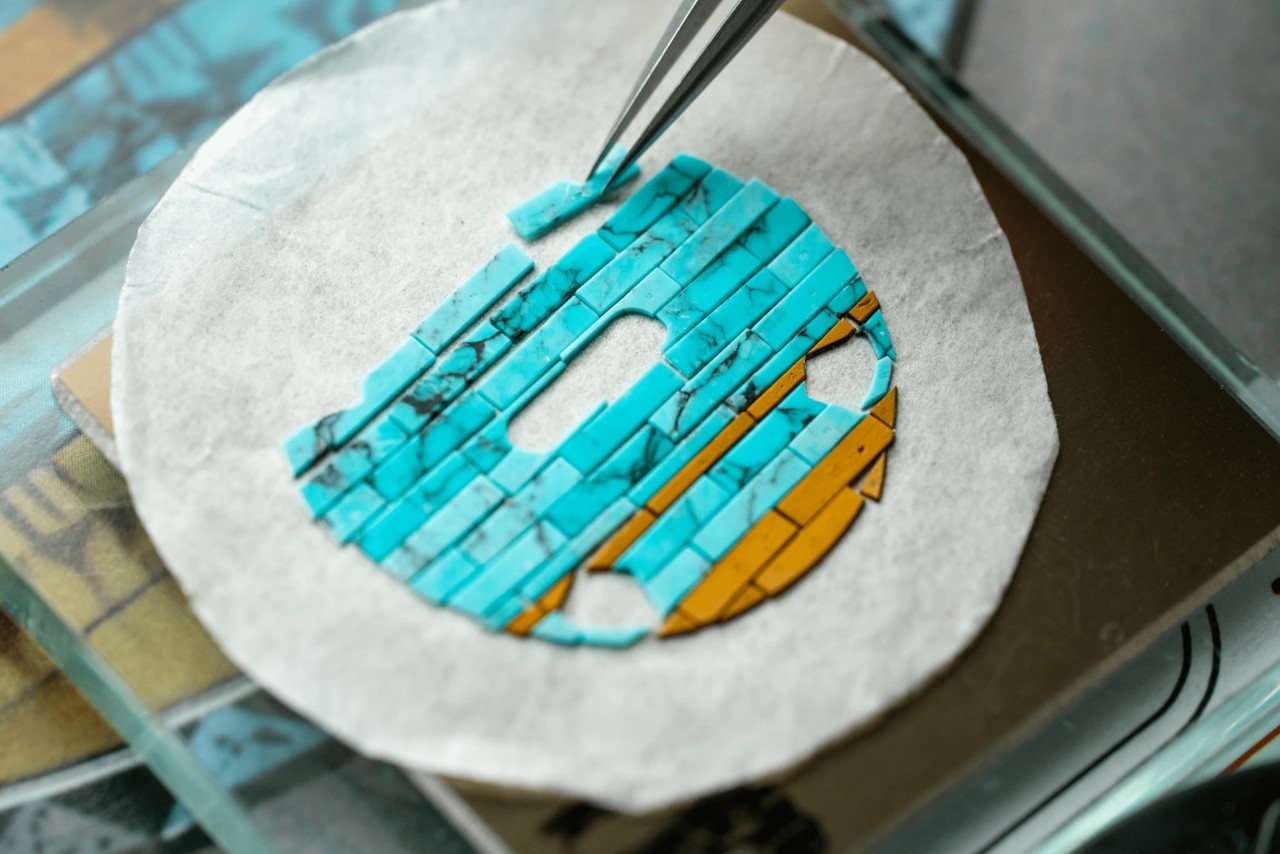 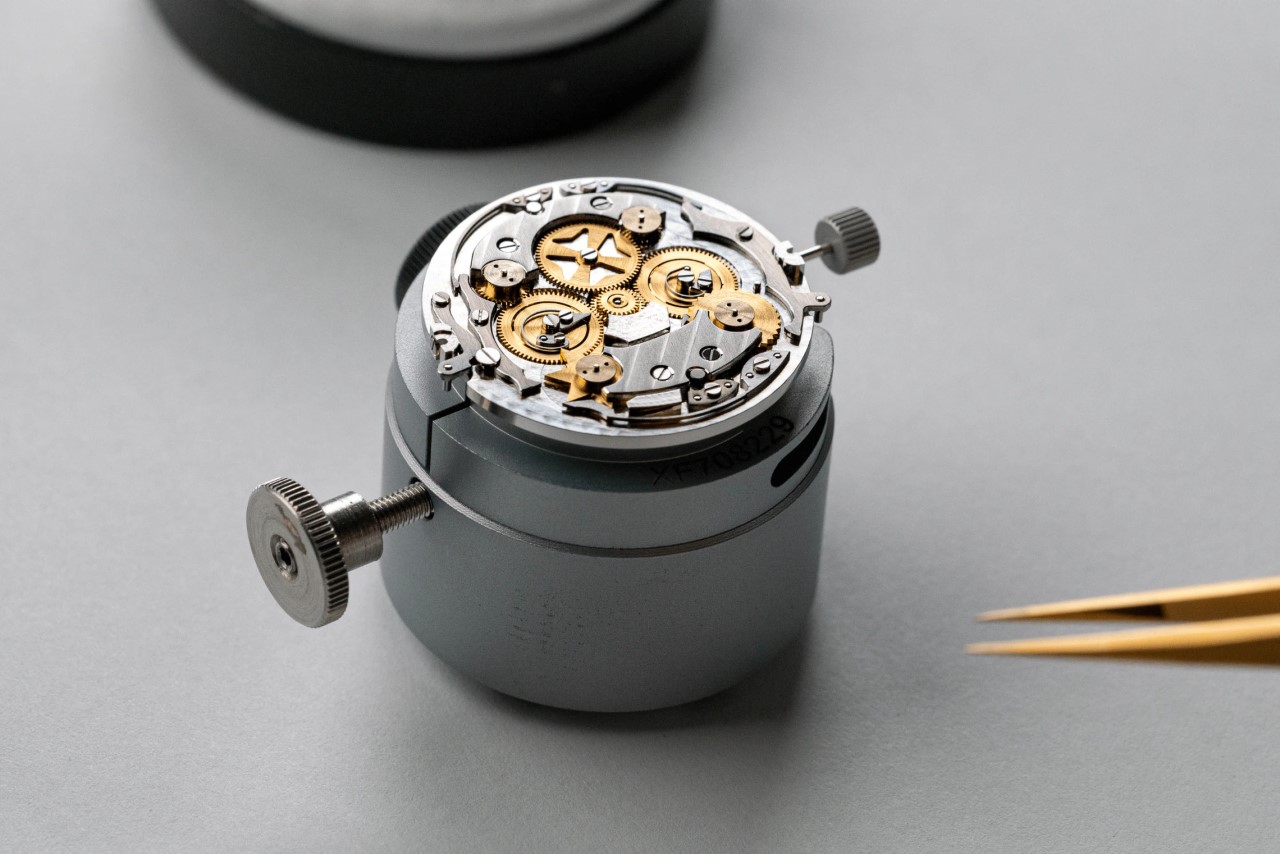 As meticulously hand-crafted as the front of the watches are, their insides are equally intricately assembled, as is made evident from the watches’ exhibition rear. The back of the watches are also accompanied by an oscillating weight that features a depiction – based on an 18th century lithograph – of the east facade of the Louvre and its magnificent colonnade.

Each of the watches are limited to only 5 pieces, given the fact that they’re all entirely crafted by hand. The prices of the watches aren’t yet known, although such sheer artistry definitely won’t come cheap. If you’ve got immense ancestral wealth or the crypto market has rendered you a millionaire, the watches are exclusively available through Vacheron Constantin boutiques. 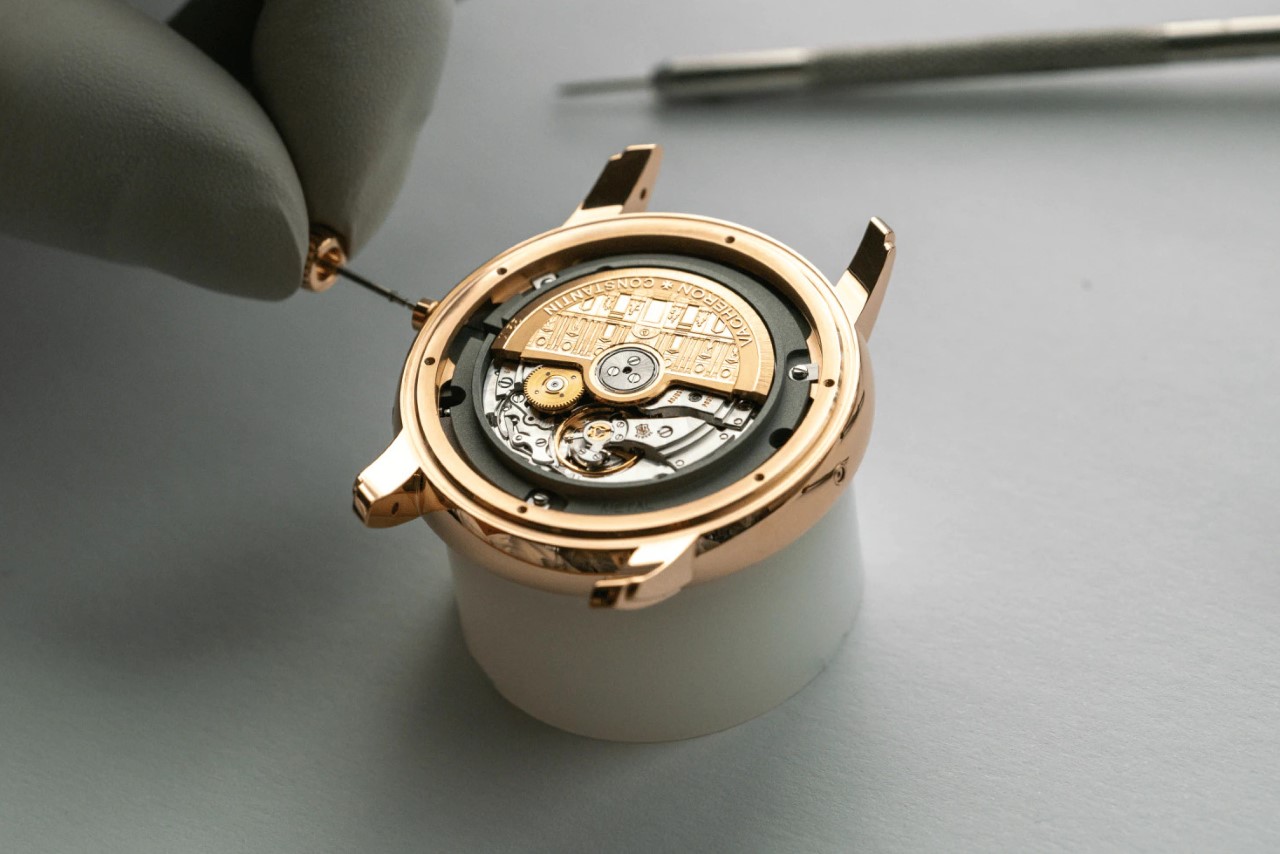 The Pininfarina Battista: Italy’s most powerful car ever

When you create a car that literally is made to stand at the pinnacle of your legacy, you give it a special christening. Pininfarina has…

Marking 100 years since the German company was first founded, and celebrating a century of changing the landscape of design and bringing Bauhaus art and…

As an avid skier, my dream vacations always involve the Swiss Alps and while ski resorts are amazing, I prefer smaller accommodations like the Whitepod…