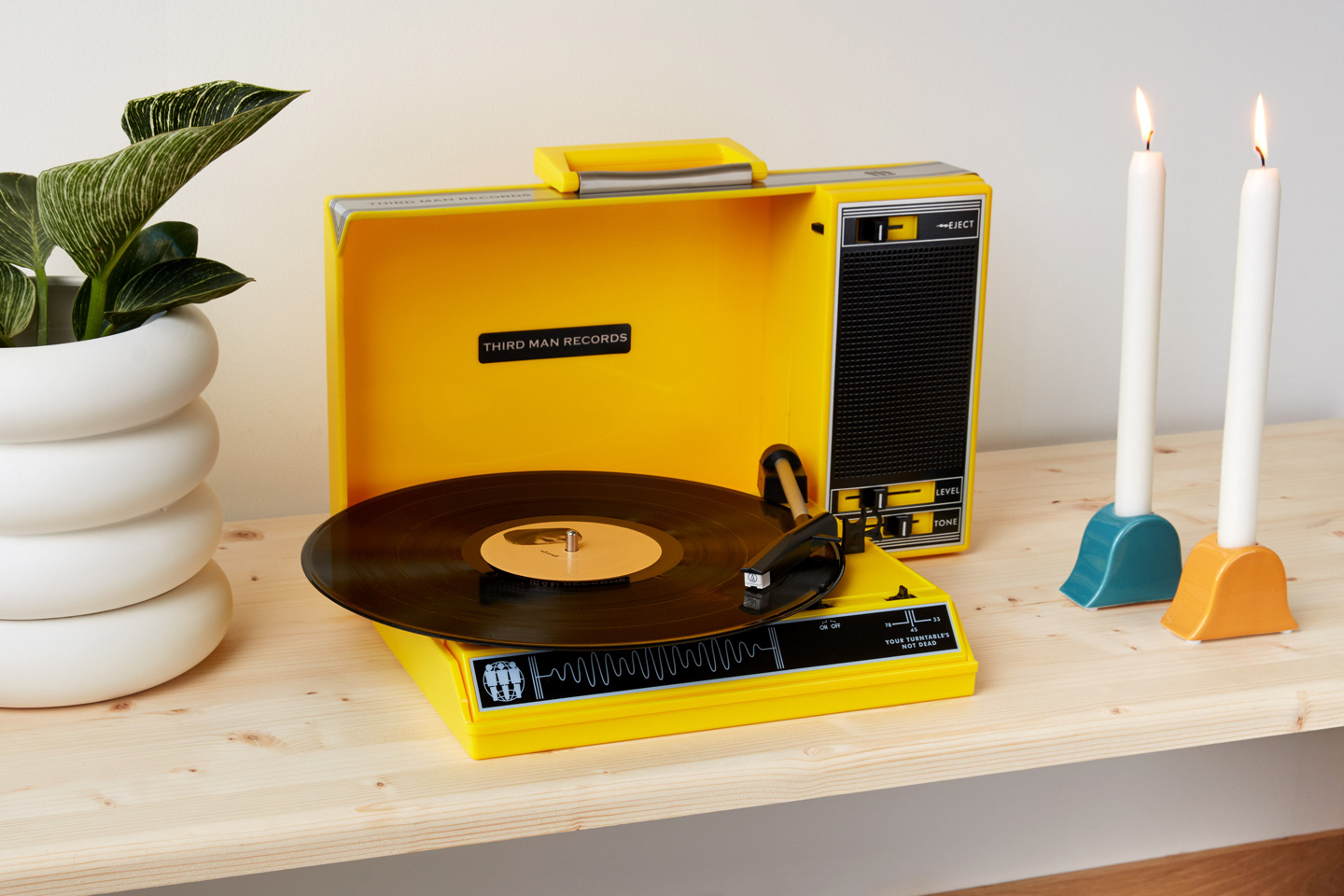 Some people didn’t really get the memo when the Walkman and the iPod made music portable! Designed for people who have a clear, unwavering love for old-school retro music players, the Spinnerette Turntable from Third Man Records, lets you easily carry your own personal vinyl disc player with you wherever you go. Designed to turn into a briefcase when closed, this portable turntable has a turntable and swing-arm, a built-in speaker with volume and tone controls, the ability to toggle between 33 ⅓, 45, and 78 RPM, and get this… even a 3.5mm headphone port! Styled in a delightfully energetic yellow colorway, the Spinnerette lets you pump out music retro style like it’s the 70s no matter where you are. Tie-dye shirt and large tinted glasses sold separately! 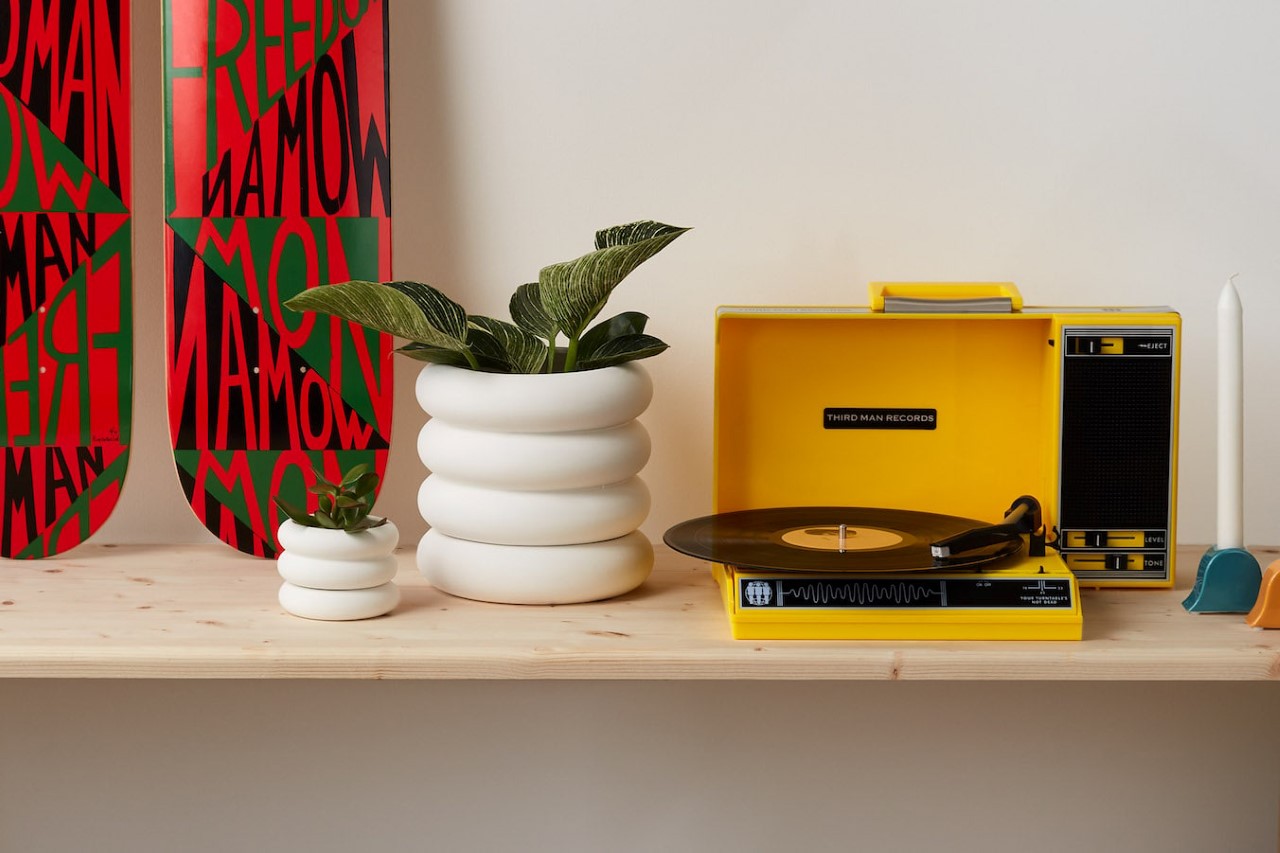 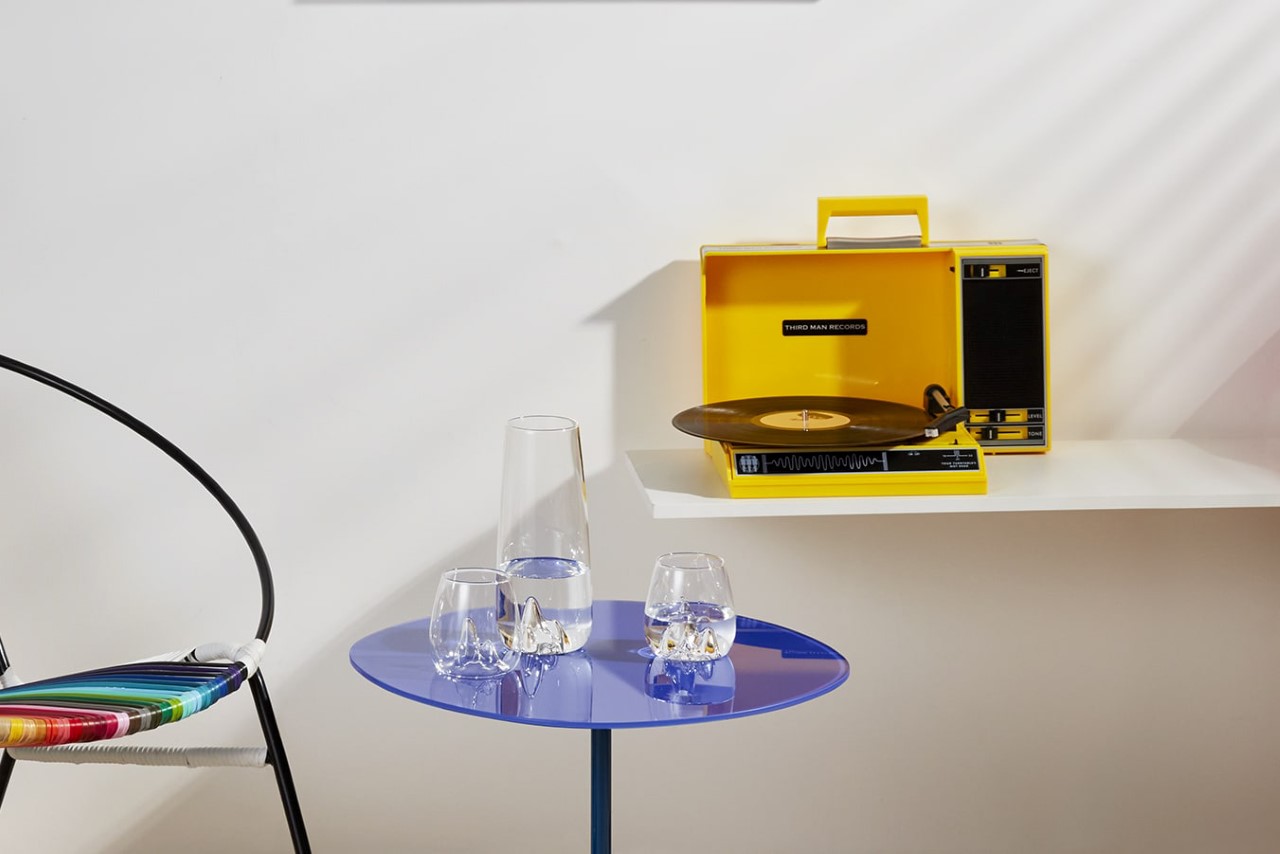 An inductee at the Museum of Modern Art, the Spinnerette comes with a belt-driven turntable mechanism, an Audio-Technica diamond-stylus needle, and has the ability to play records at 3 different speed settings. To the right of the turntable sits a dynamic full-range speaker built into the ABS chassis of the Spinnerette. If the speaker isn’t quite punchy enough for you, the Spinnerette does have a headphone out, letting you connect something more substantial. Moreover, there’s even an aux input, in case you want to play stuff through the Spinnerette’s speakers, and a PC output that lets you directly send music from your vinyl to a laptop or desktop via USB – a feature that’s great for deejays and people who want to sample audio from old vinyl discs!

The Spinnerette is powered by an AC input (even though it’s portable, it isn’t wireless), and unfortunately there’s no Bluetooth capabilities on this pretty-boy, but maybe future iterations will support wireless audio… although it sort of defeats the hipster purpose of owning a retro turntable device, doesn’t it?! 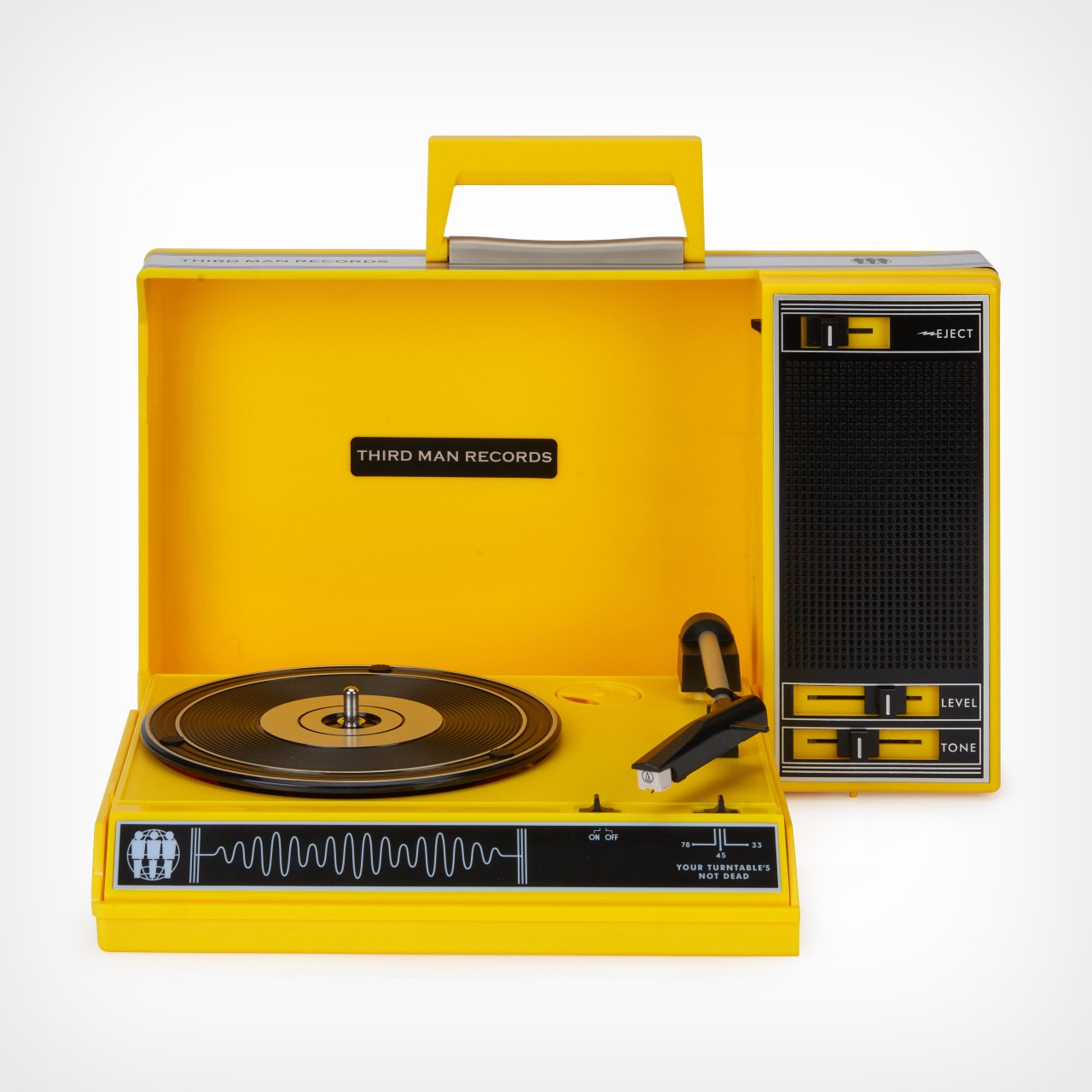 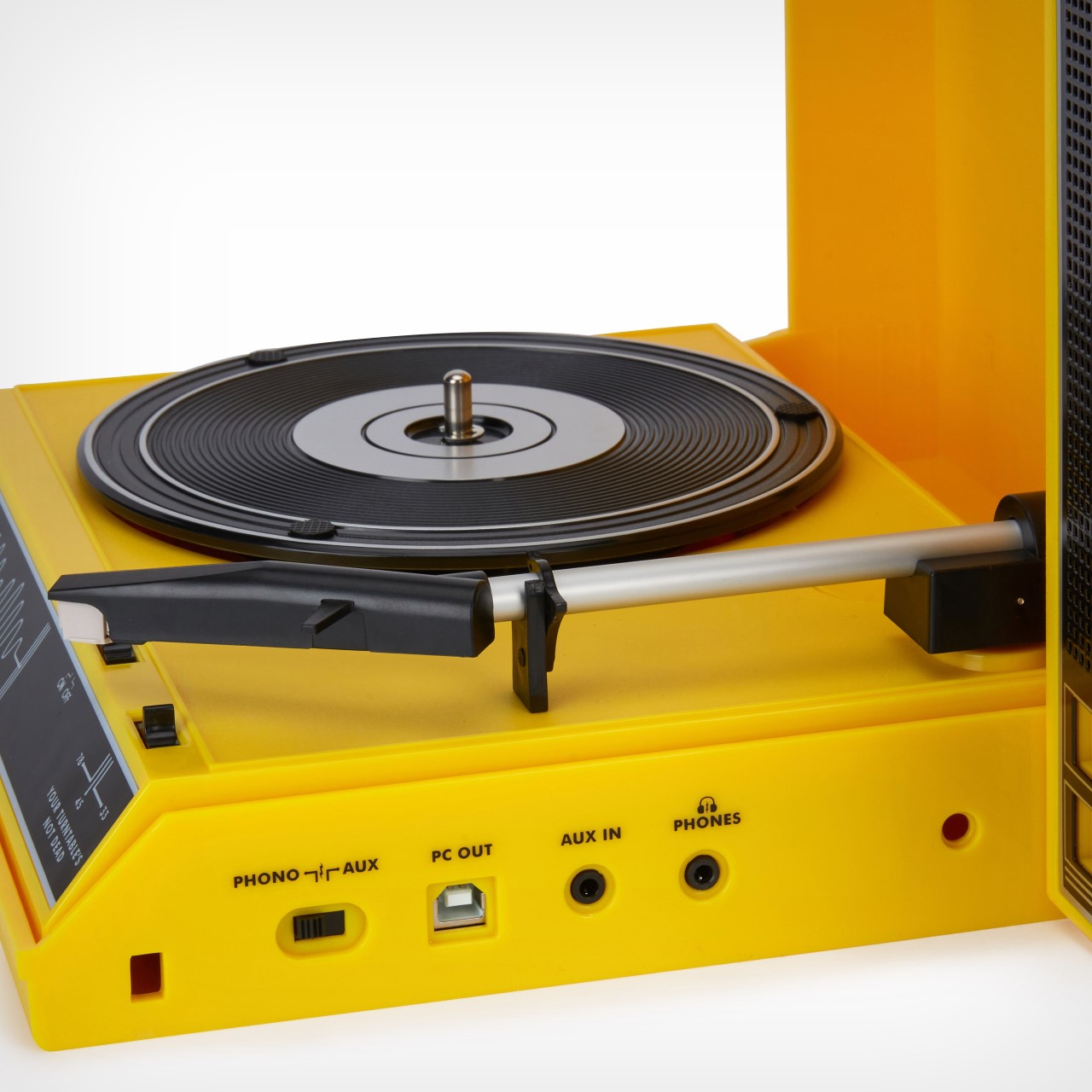 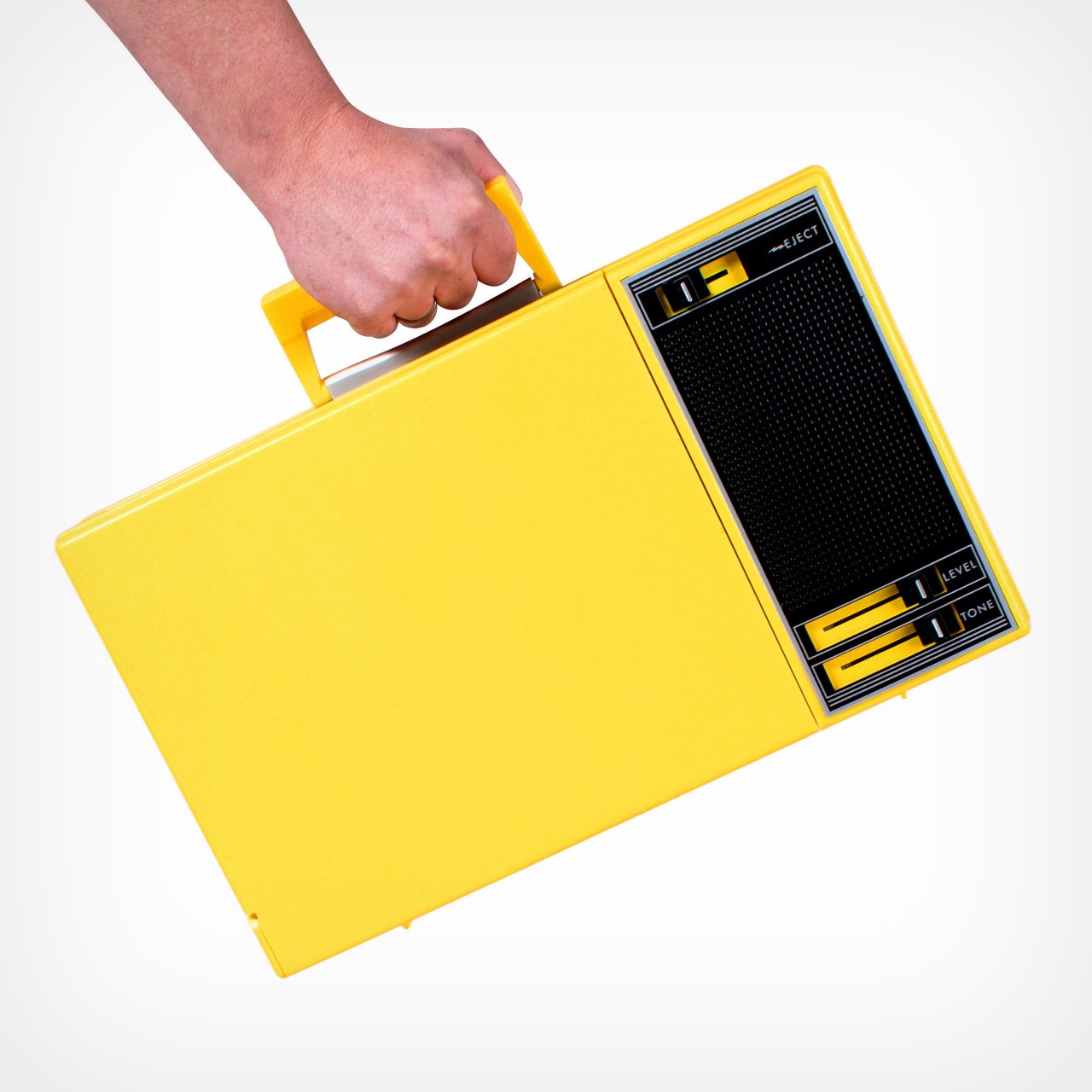 The internet is filled with very believable knockoff AirPods Max headphones. Here’s how to spot a fake.

It’s difficult to say if some of these knockoffs were made to just harmlessly copy Apple, or to actually defraud customers, says YouTuber Dave2D… but…

Good Vibes for All

Ampathy (a portmanteau of “AMPlifier” and “empATHY”) aims to enhance your entertainment experiences with good vibes! This soft, huggable speaker substitutes sound into solid vibration,…

With the Apple Watch announcement, many an inspirational designs in concept Apple wearables have been dashed. The real thing is sleek and very Jony Ive,…

The Music Light isn’t the first light show device generated by measuring certain frequencies of sound. In fact there are already a few on the…