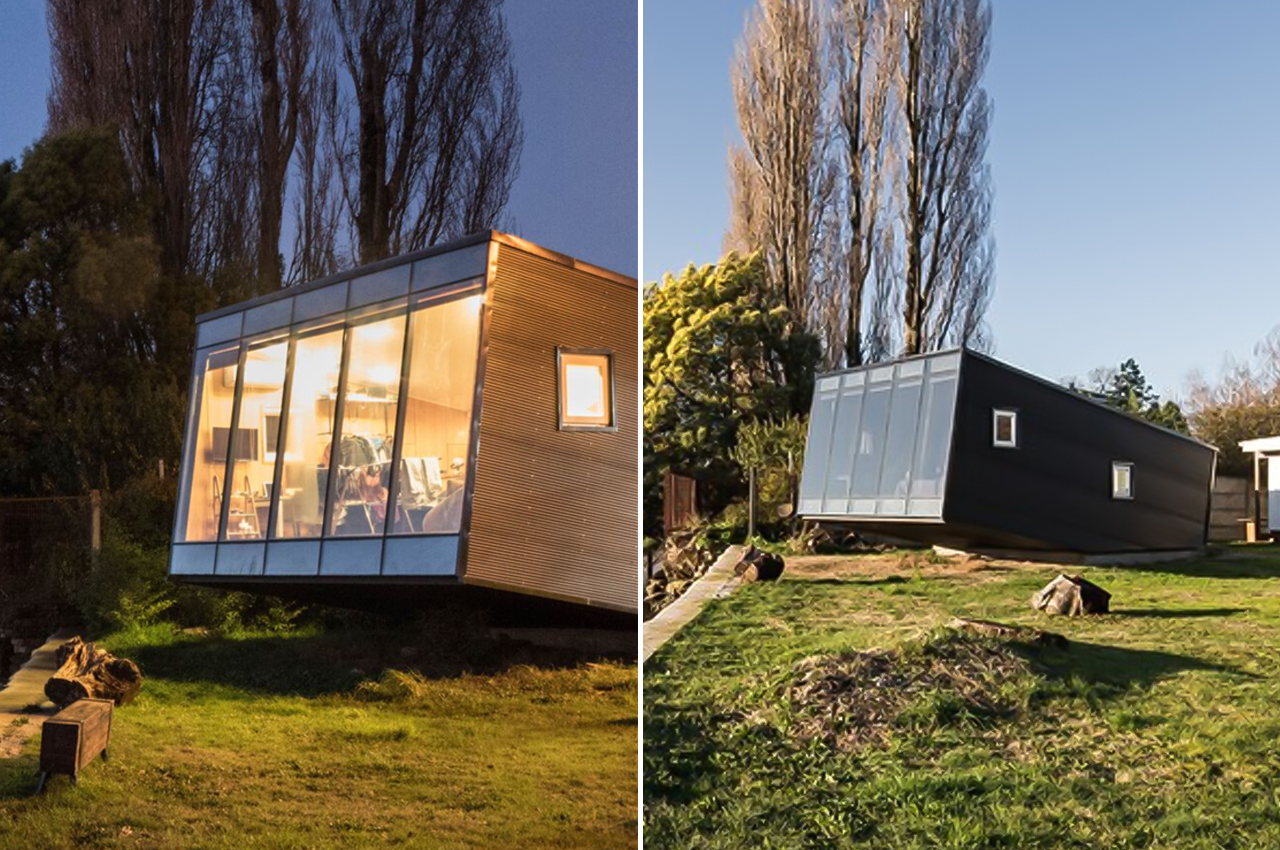 Riverside Cabin is a tiny cabin with a unique shape and open-plan interior space to shelter visiting professors at the Universidad Austral de Chile.

On the banks of the Calle-Calle River in Valdivia, Región de Los Ríos, architects with Arce & Westermeier were commissioned to design and construct a shelter to function as a local professor’s riverside retreat. Located close to the Universidad Austral de Chile, the tiny home is called Riverside Cabin after its harmonic relationship with the Calle-Calle River. Brimming from the natural treeline that extends along the river’s edge, Riverside Cabin takes on an unconventional shape that embraces the home’s surrounding landscape and ecosystems. 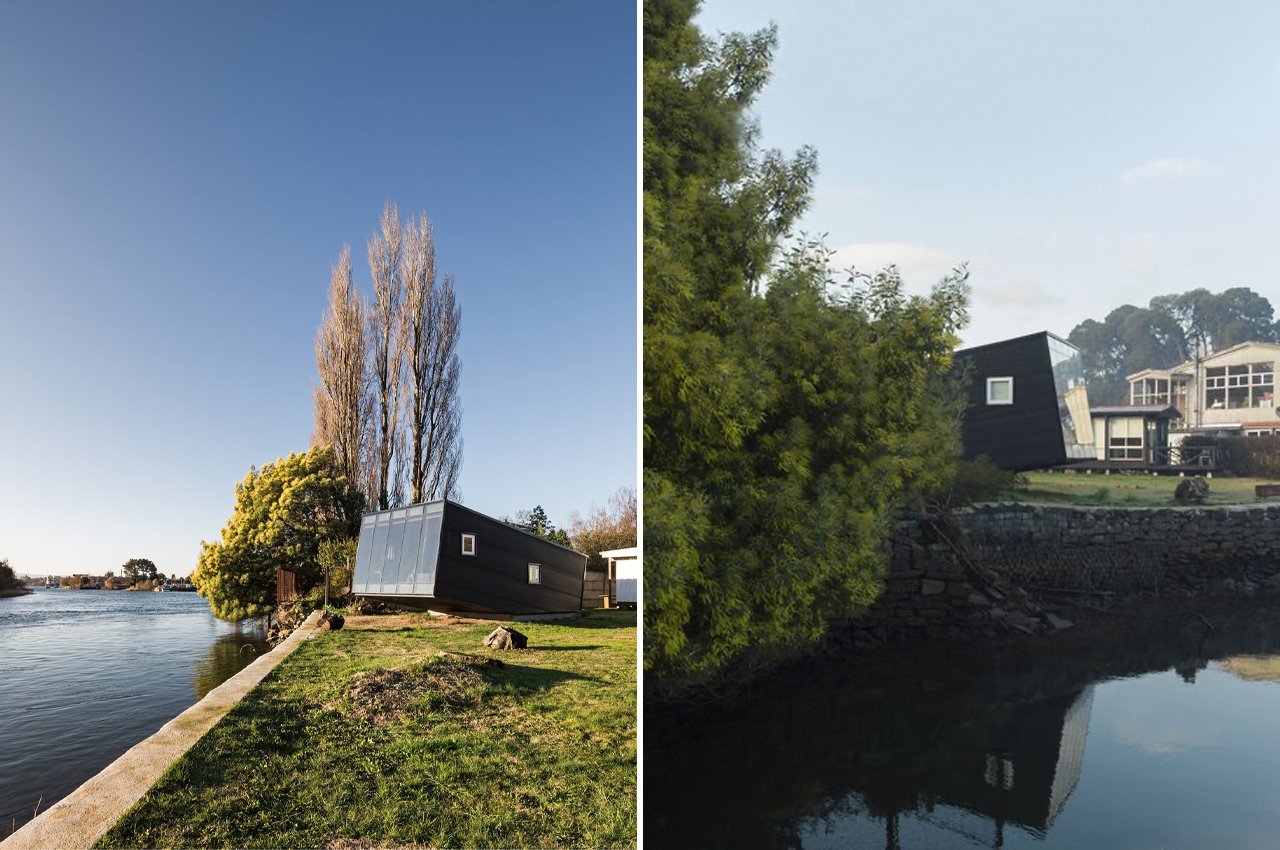 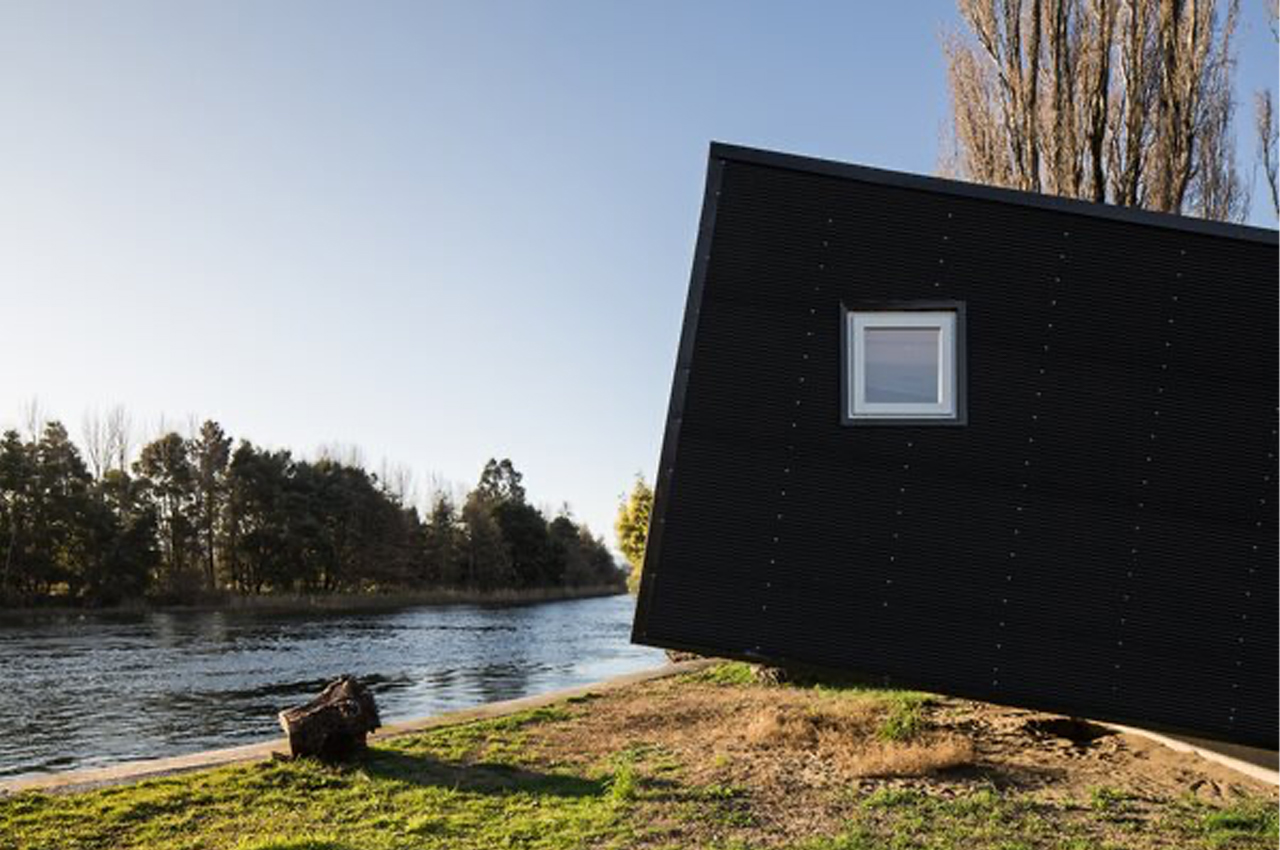 In the initial stages of designing Riverside Cabin, the architects with Arce & Westermeier asked, “What kind of relationship with the river do we want: a traditional one, which seeks that each program enclosure manages to please itself with this unique geographical element? Or rather, one that selects where and how this visual pleasure is obtained?” 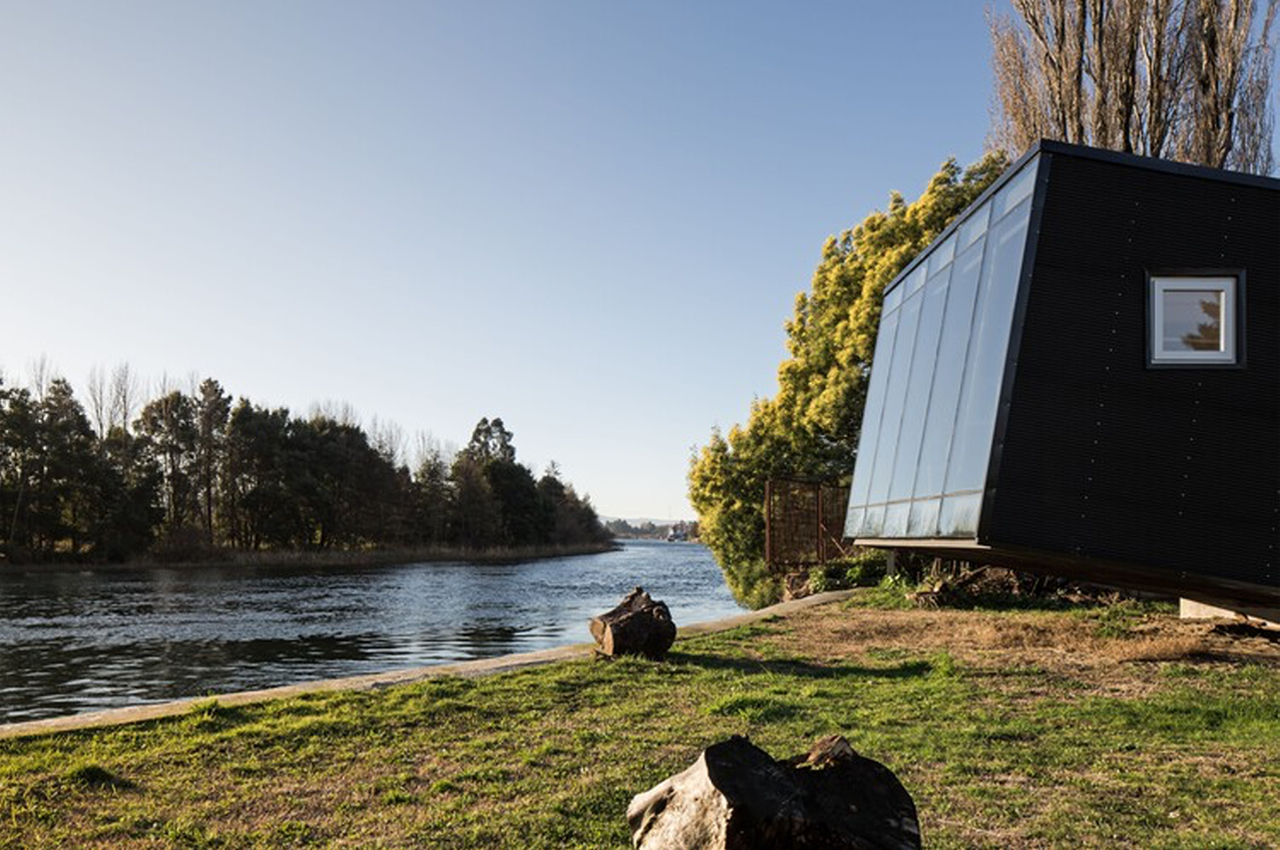 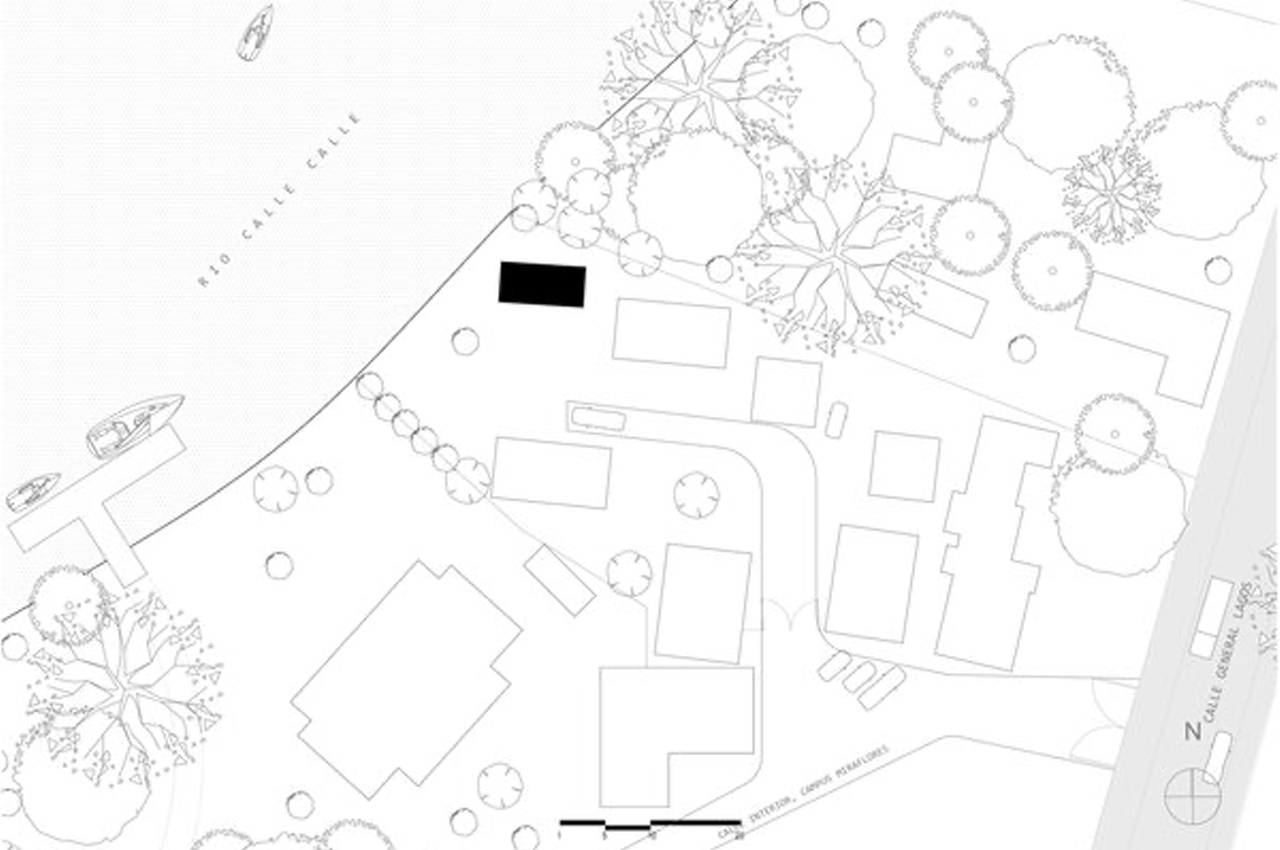 Upon realizing they’d like to explore the latter, Arce & Westermeier found Riverside Cabin’s unique look. Tilting one end of the cabin towards the sky elongated the internal volume and gave the ceiling lofty heights to accommodate the bi-level interior. 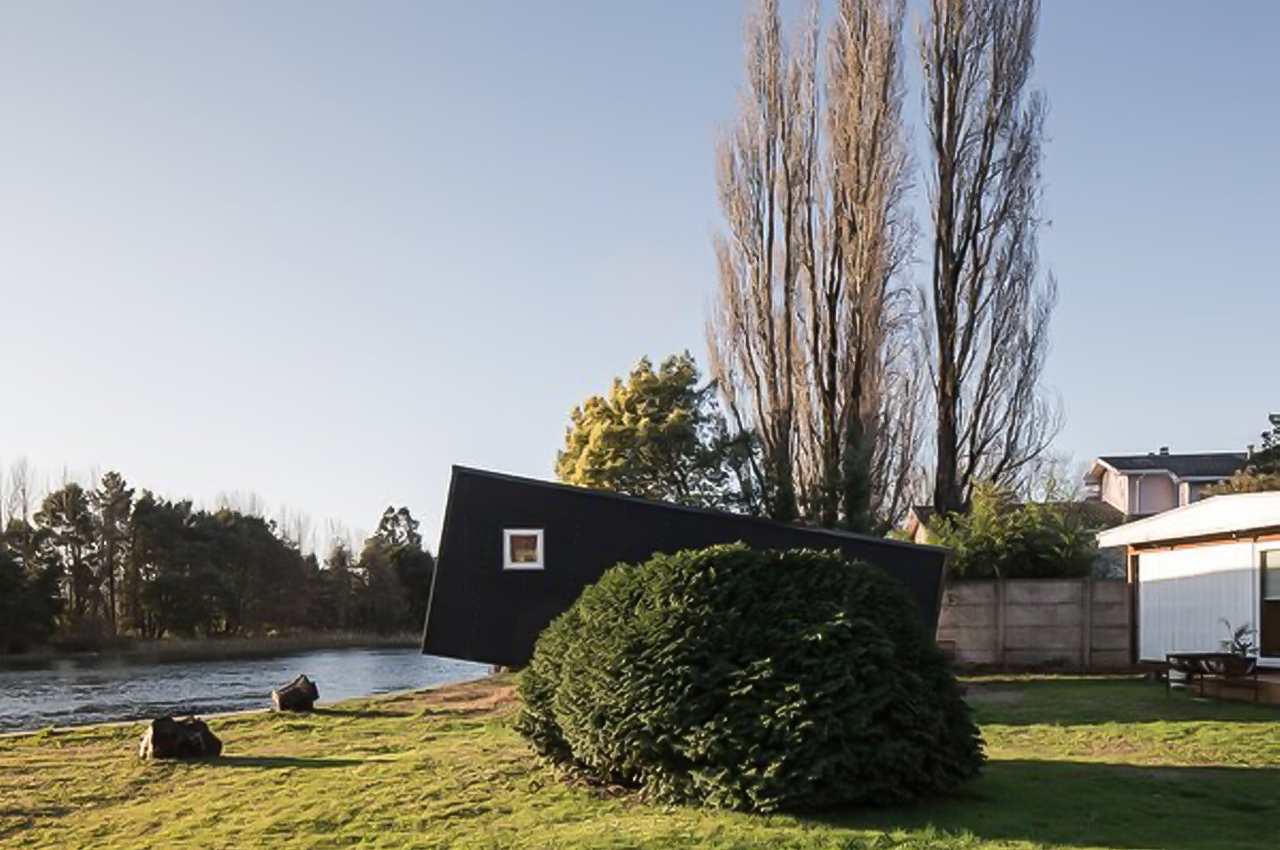 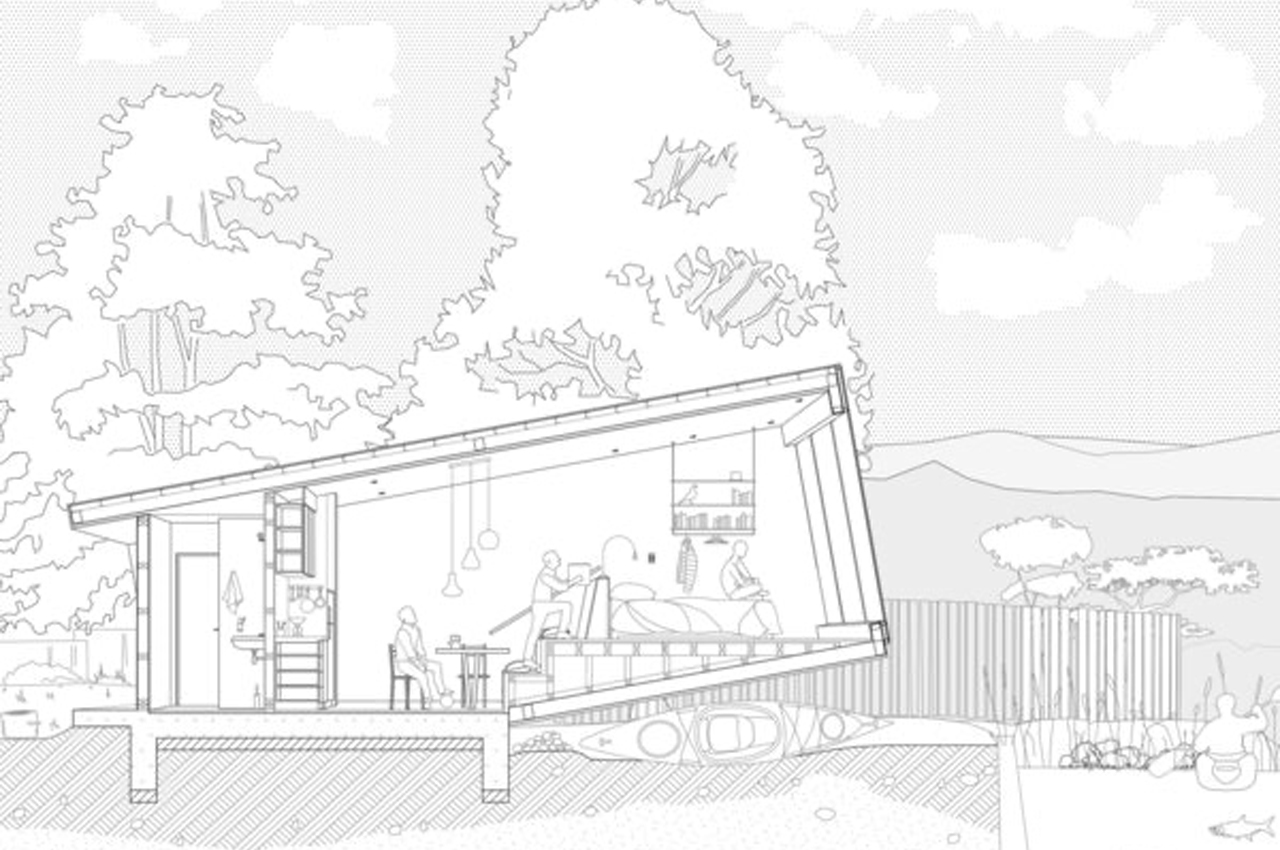 Inside the cabin, the ground-level hosts a bathroom that stands to the side of a space where the dining, kitchen, and living areas are combined. Then, moving up a few steps, the cabin’s residents are welcomed by the sleeping and study area that merges with an expansive floor-to-ceiling curtain wall that teeters off the river edge. 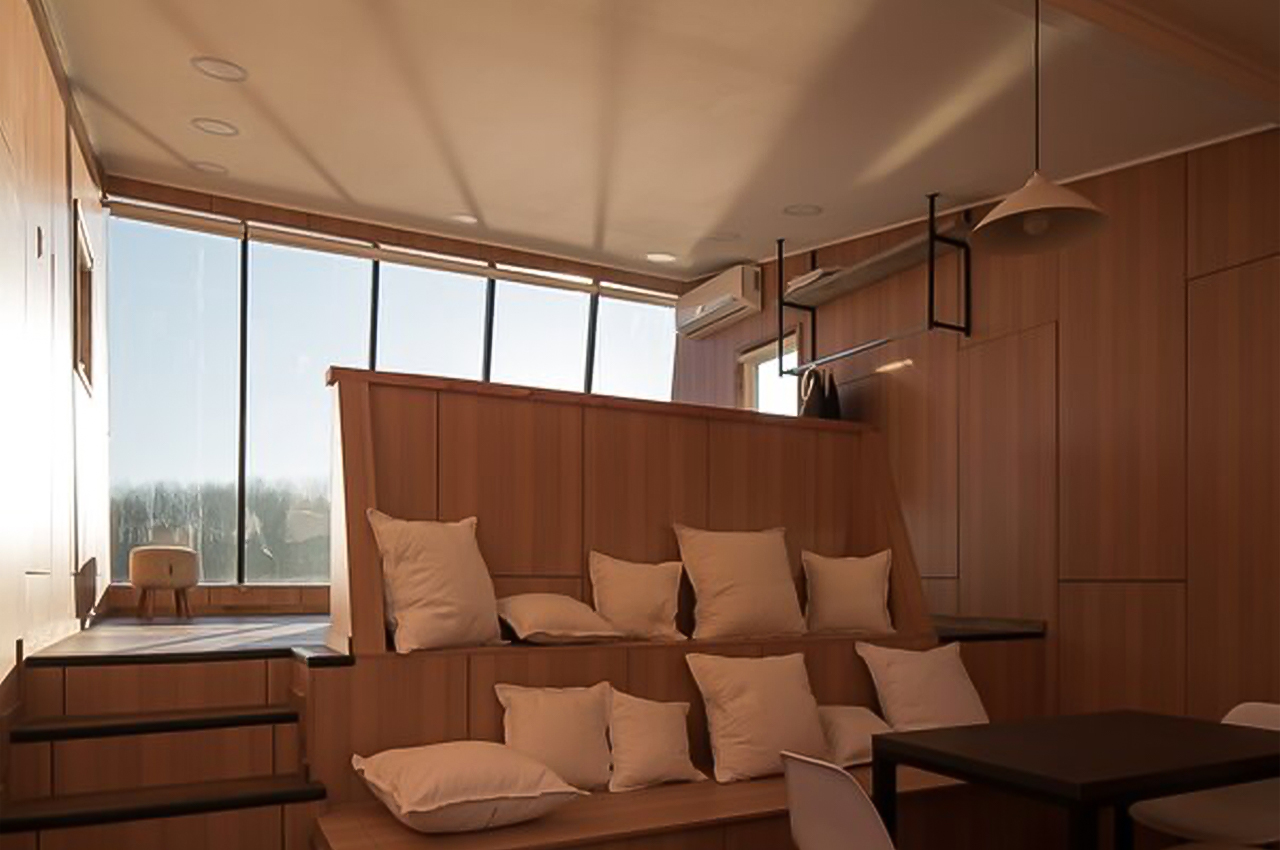 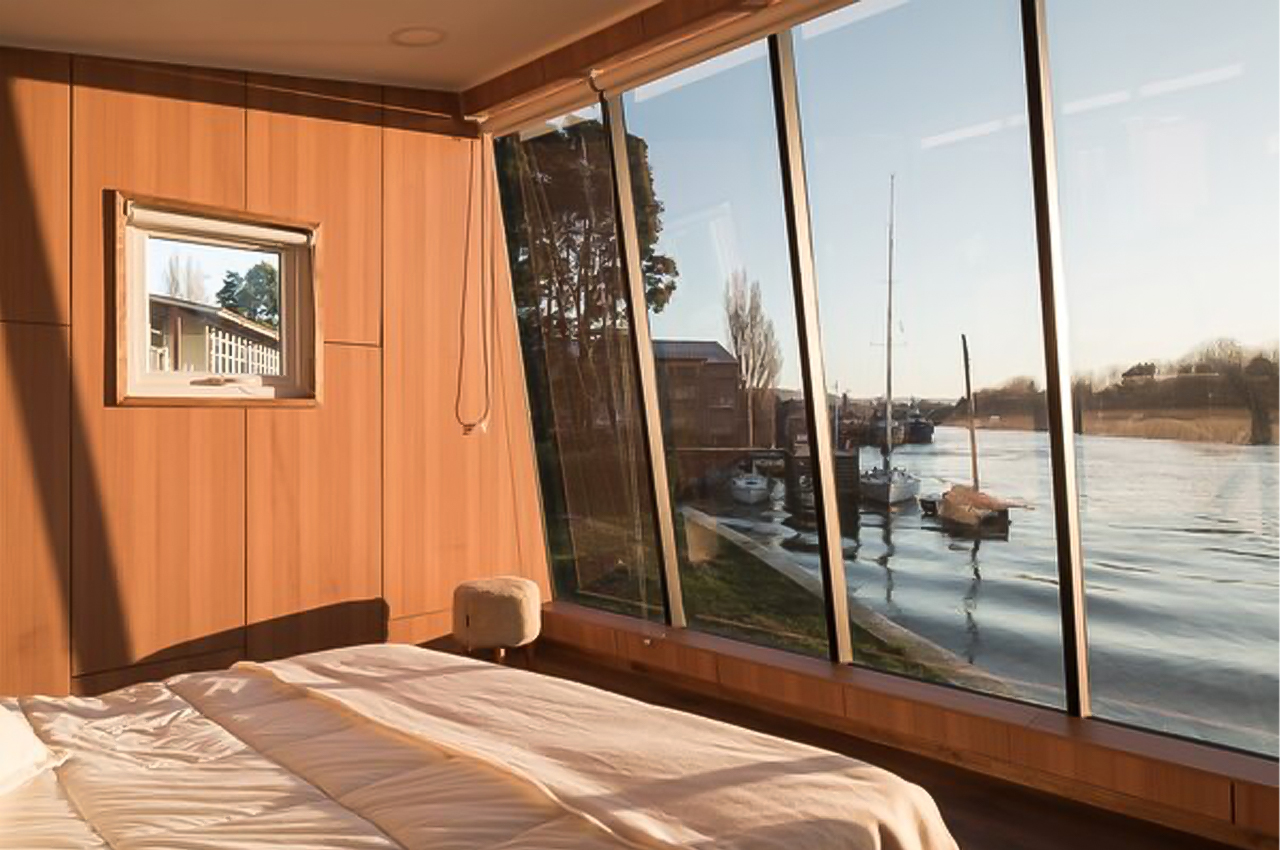 Dividing the cabin into two spaces, a wooden partition doubles as the bed’s headboard and the dining area’s seating arrangement. Maintaining an open-plan layout for the interior space, Arce & Westermeier architects wanted the main living space to be flexible. 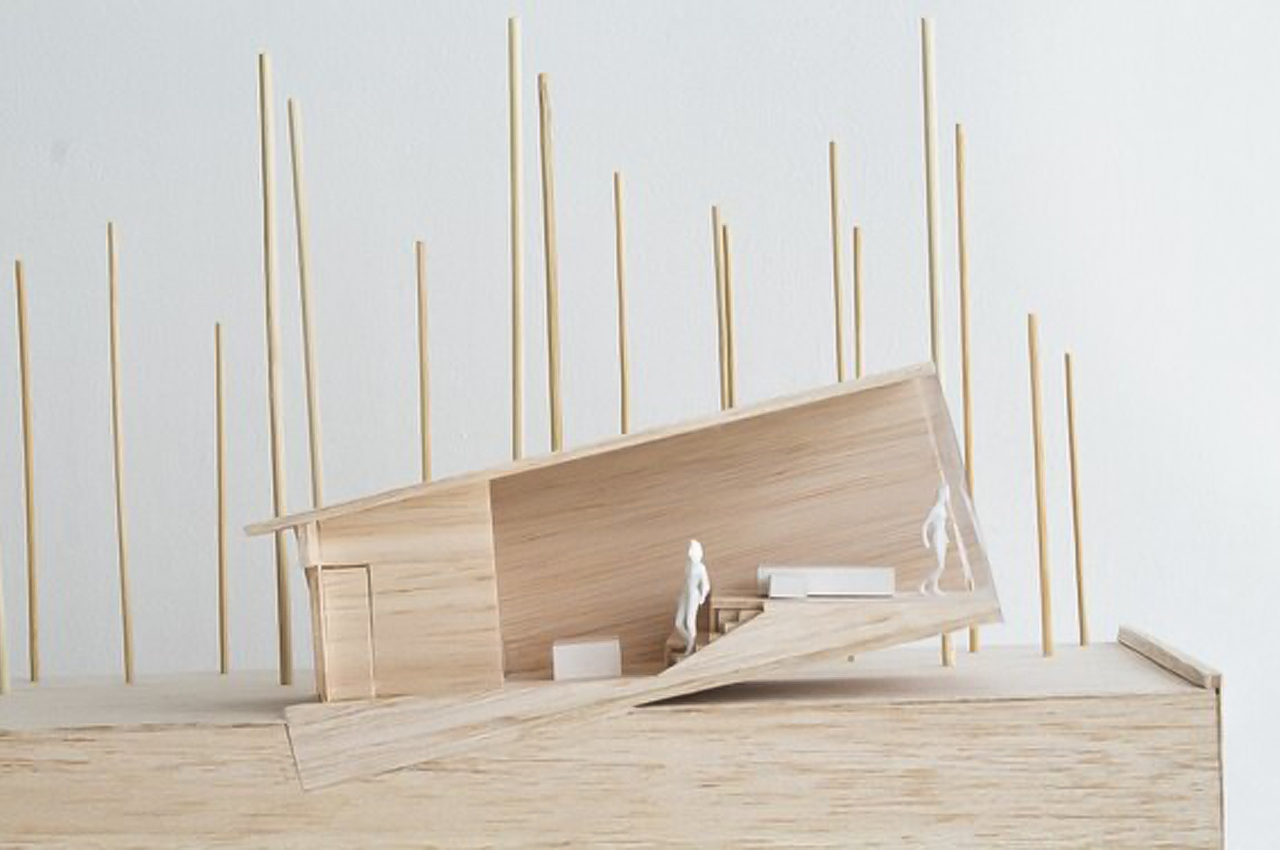 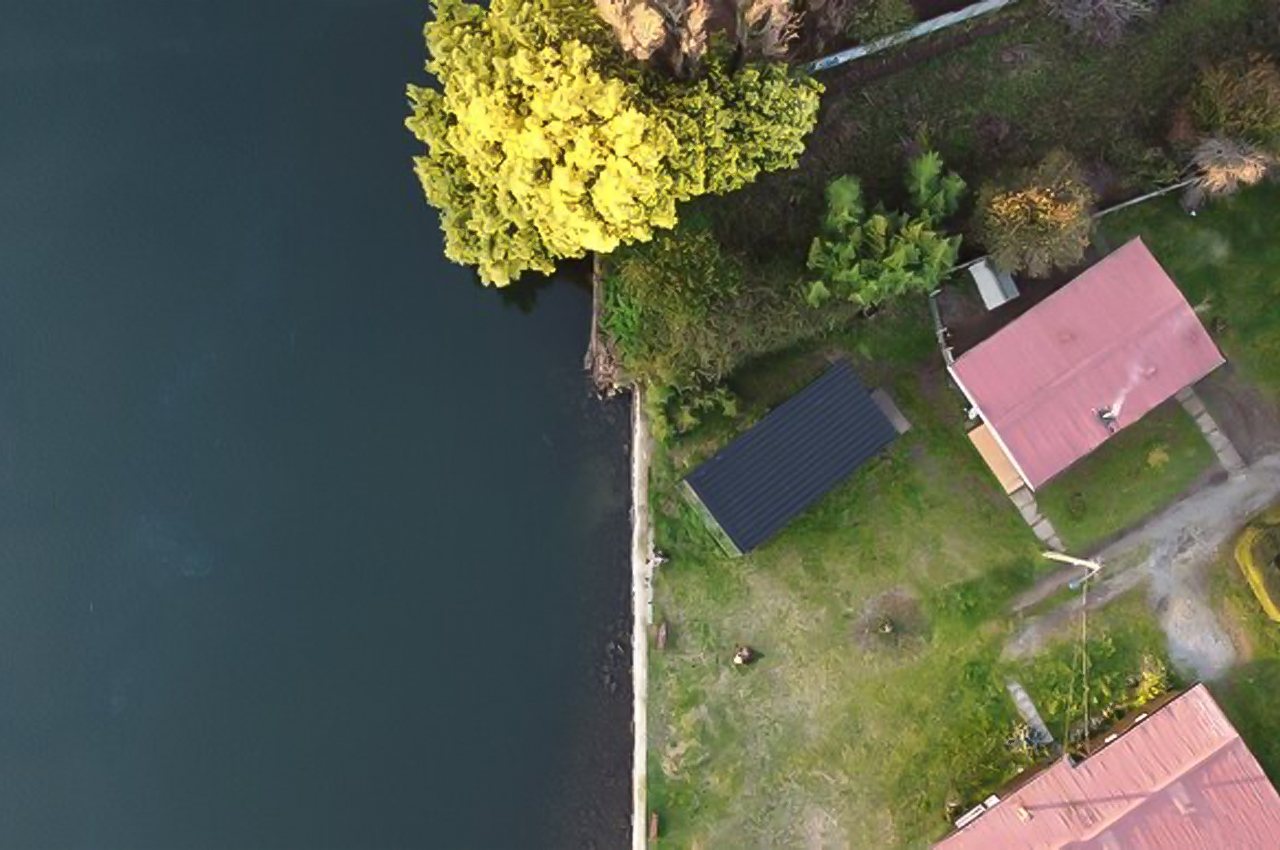 Noting the spatial relationship between the two levels, architects at Arce & Westermeier note, “Thus, these different levels become both the living room and the seating for the dining table, in addition to functioning as a transitional space.” 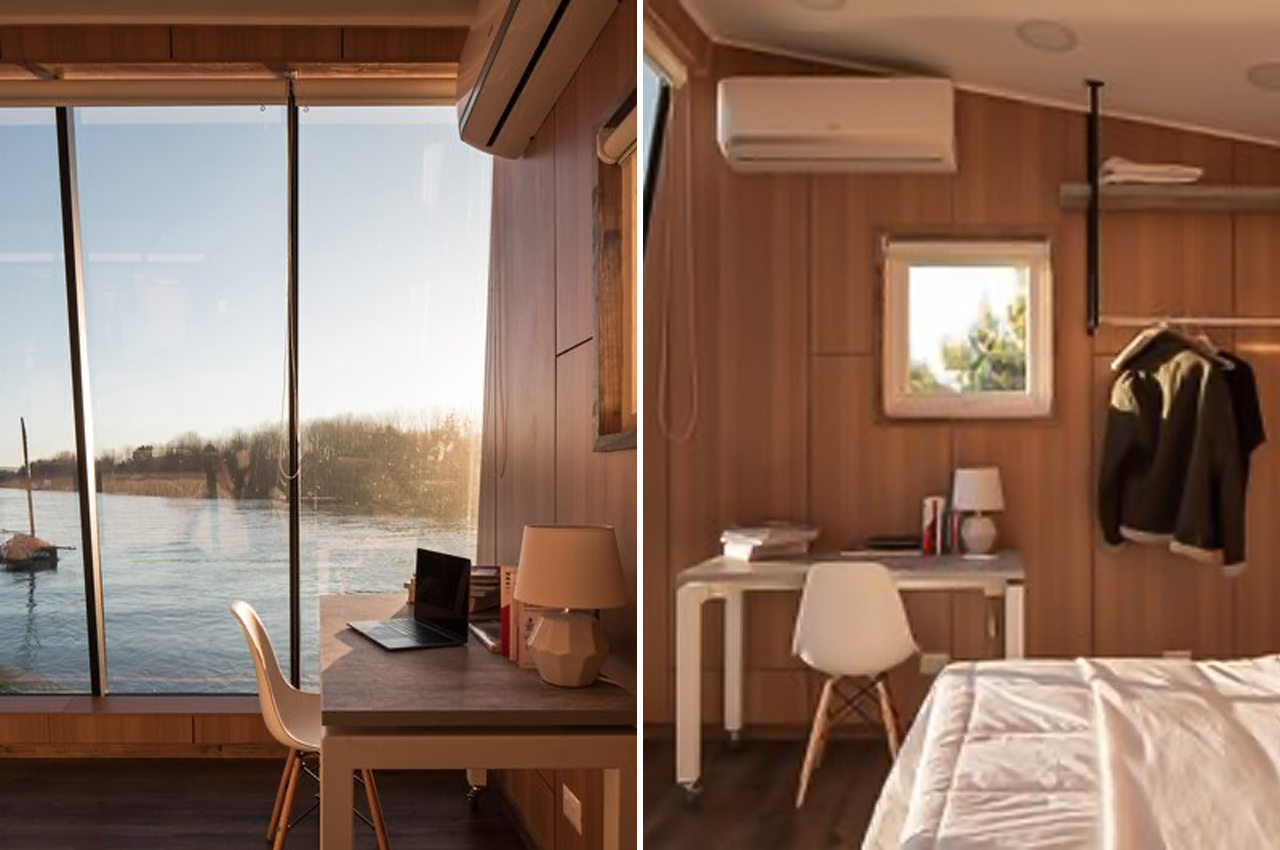 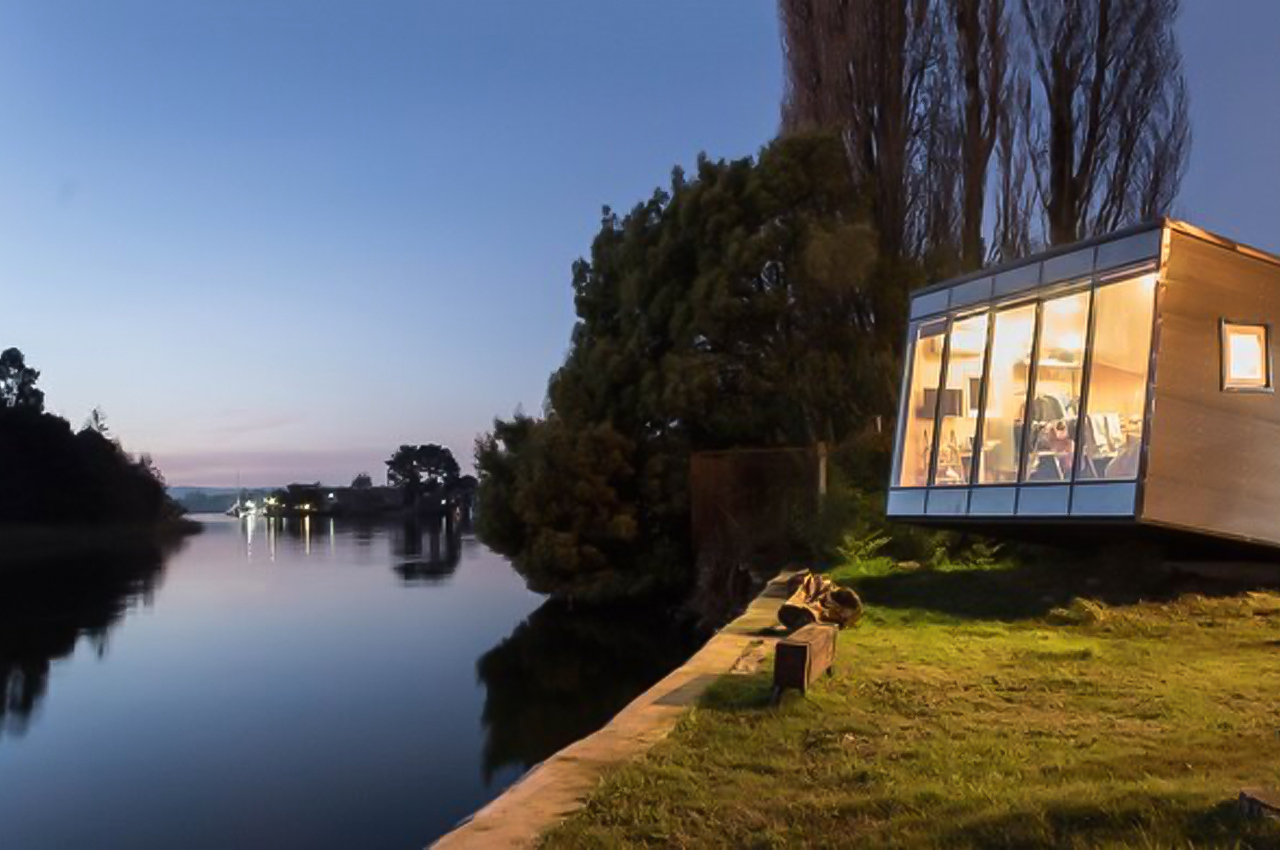 Riverside Cabin is constructed primarily from dark, prefabricated metal plates that brace Chile’s rainy climate while offering a sort of cloak during the night. In contrast to the dark exterior, Riverside Cabin’s interior walls are clad in plywood to offer a warm refuge from the outdoors. 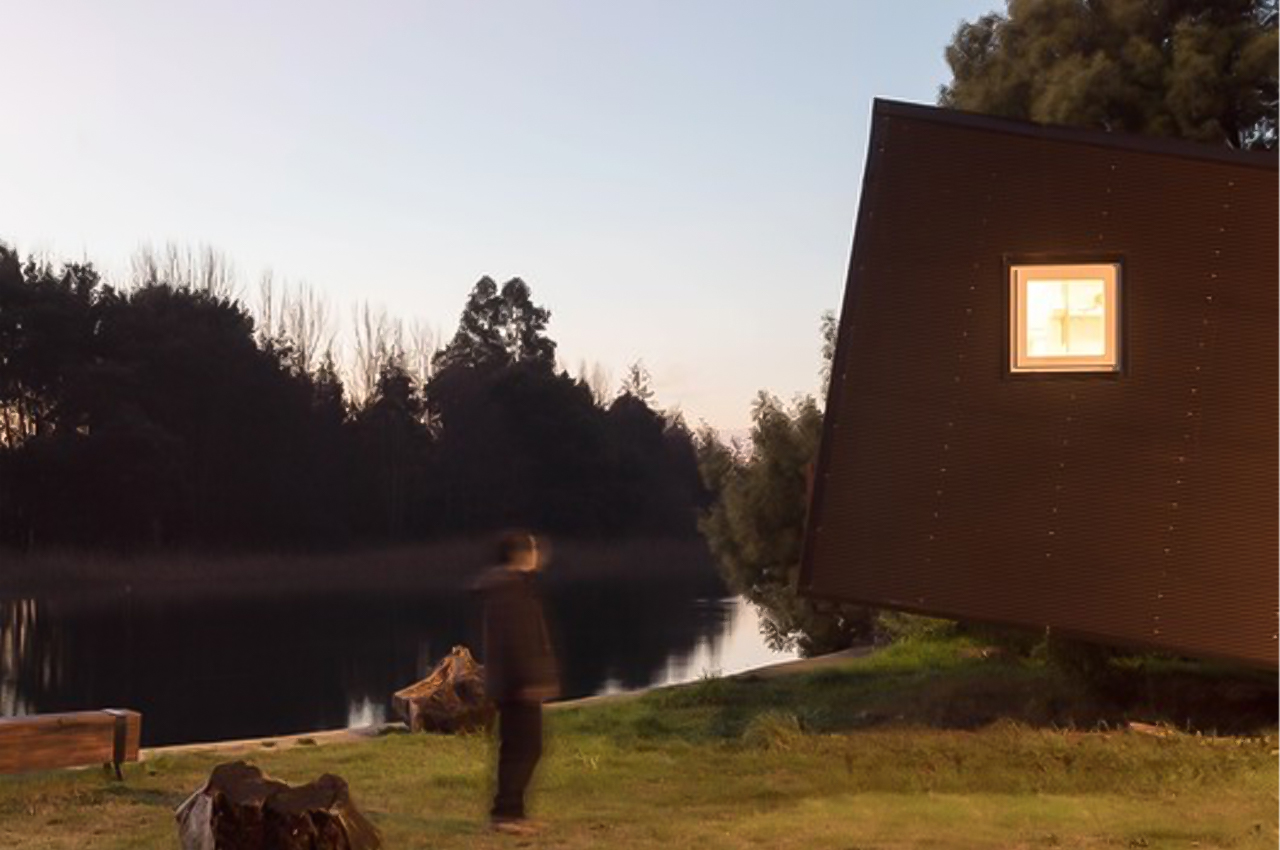 Come dark, the interior lights glower like a lantern in the night. 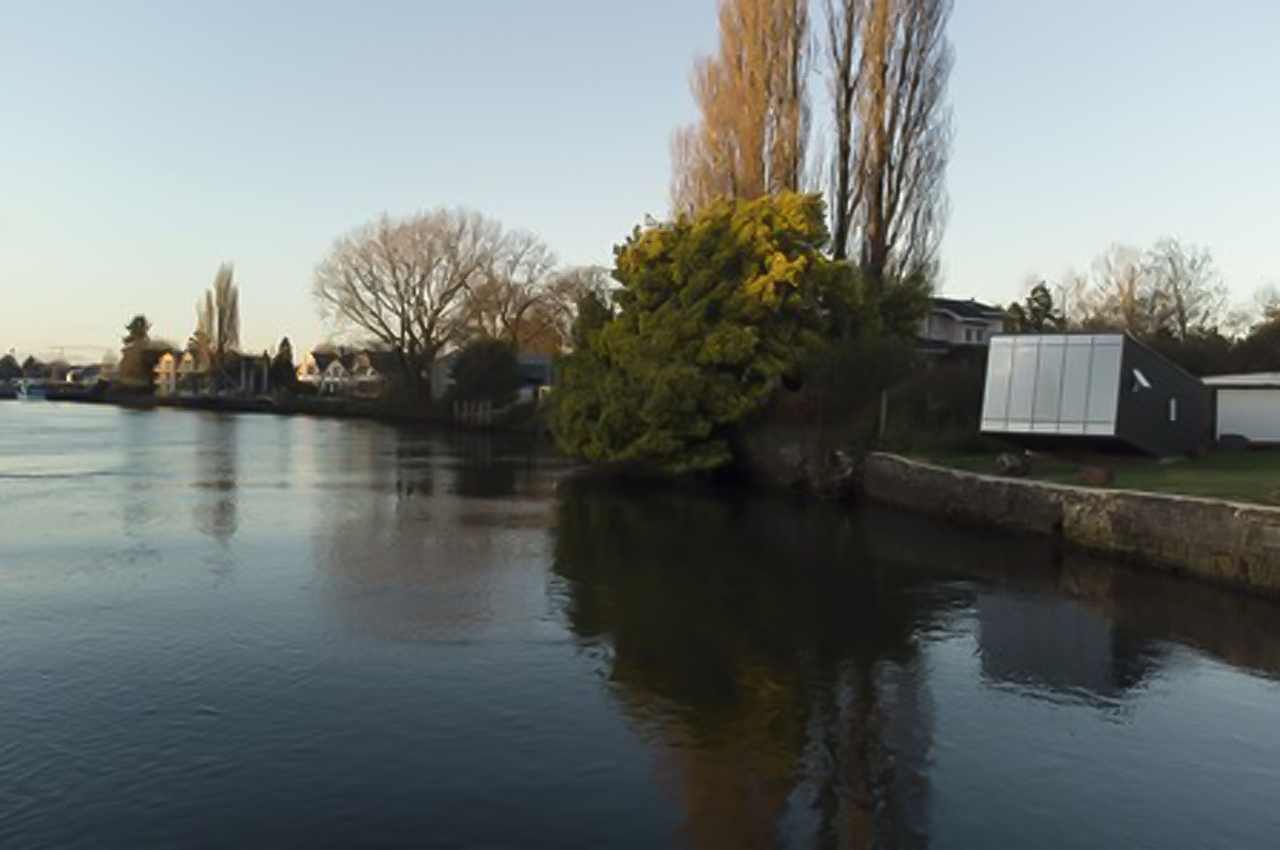 The main priority in constructing the Riverside Cabin was for it to blend in with the surrounding architecture, without taking away from the available views of the river.

The internal volume lifts up to bring guests over the river’s edge and provide the ceiling with lofty heights. 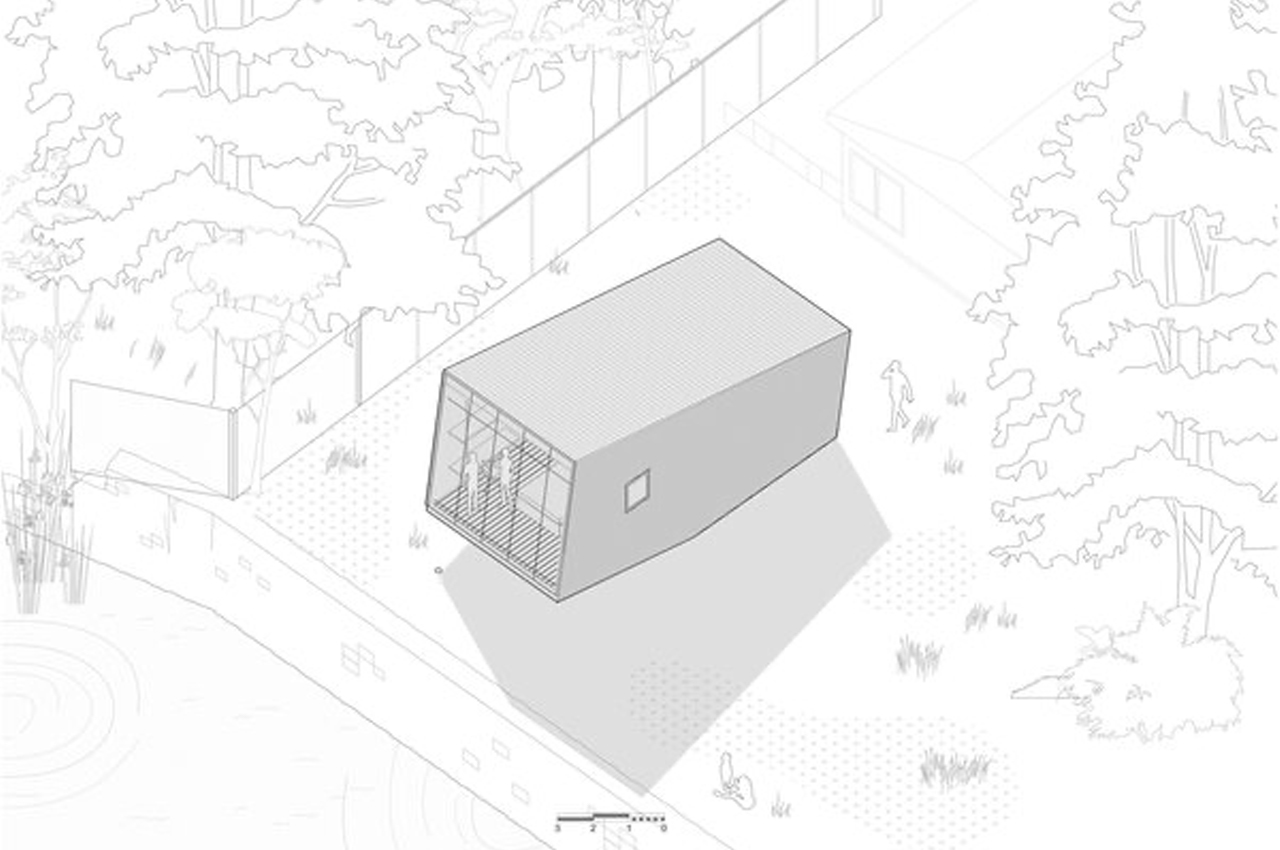 This modern furniture holds a full-length mirror and hides a storage shelf!

Small space-friendly furniture has become my most pinned-to board on Pinterest. Maybe it is all that time I am spending at home that is making…

The building block of matter and time

This Ain’t No Holiday Inn

Instead of letting hotels dictate where you vacation, why not make the hotel go where you want?! The latest in a trend of micoarchitecture, DROP…

The area on this map, called Madla-Revheim, is the main developmental edge of Stavanger, Norway for which MVRDV and Space Group seek to implement 4000…