On the one hand, you’ve got companies like Apple, still selling smartphones with notches in 2021… and on the other, you’ve got Vivo, a company that’s working on a foldable smartphone with 3 folding elements as well as 2 projector lenses that cast a virtual keyboard on your table.

Simply called the Vivo Tri-fold, this concept was brought to life by Technizo Concept, based on a patent discovered by LetsGoDigital. The 9-page patent document, filed by Vivo at the USPTO in June this year, shows a wild 3-fold smartphone that the Chinese smartphone giant is allegedly working on. What’s crazy about the patented design isn’t just that it comes with a massive flexible display that folds with 2 crease lines… it also somehow manages to pack not one, but TWO projectors in its lower corners, allowing the phone to cast a virtual keyboard on any surface when propped vertically upwards. The phone comes with a massive 16:9 screen, dual front-facing cameras, and miraculously enough, no sign of a notch. 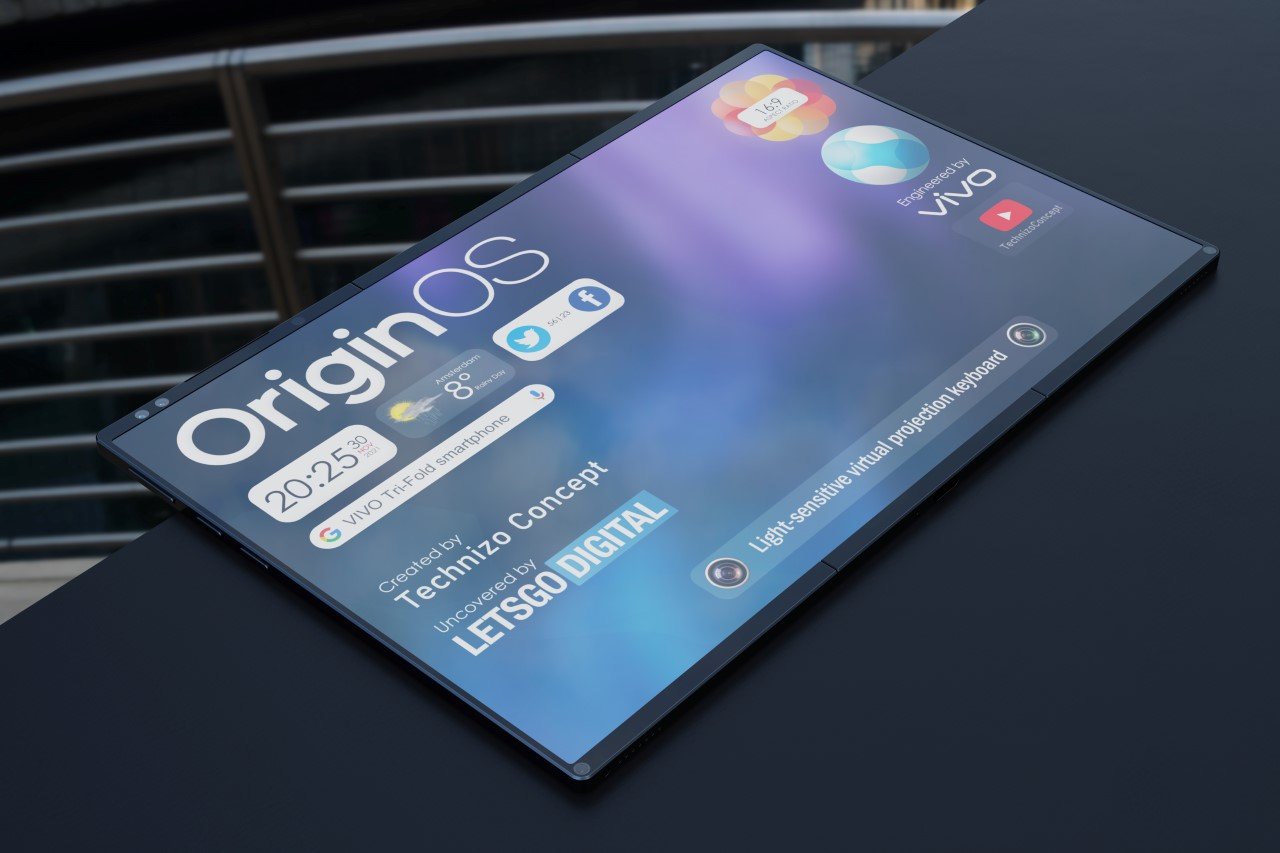 What’s remarkable about this Vivo phone concept is that it’s nothing like the smartphone you’ve got in your pocket right now (or in your hand, if you’re reading this on your phone). The Vivo Tri-fold is basically a tablet that folds twice in a Z-shape (much like this Samsung concept), but somehow still manages to retain an incredibly slim profile, measuring no more than a marginally thick smartphone from roughly a decade ago. The Z-shaped folding technique gives you a screen on the front that lets you use the Vivo Tri-Fold like a regular phone, while its complex hinge system allows you to open it up into a tablet that can either be used in-hand, or kept standing upright on a tabletop surface (probably using a pop-out stand) while the projectors at the lower corners kick in to give you a virtual keyboard to type on. 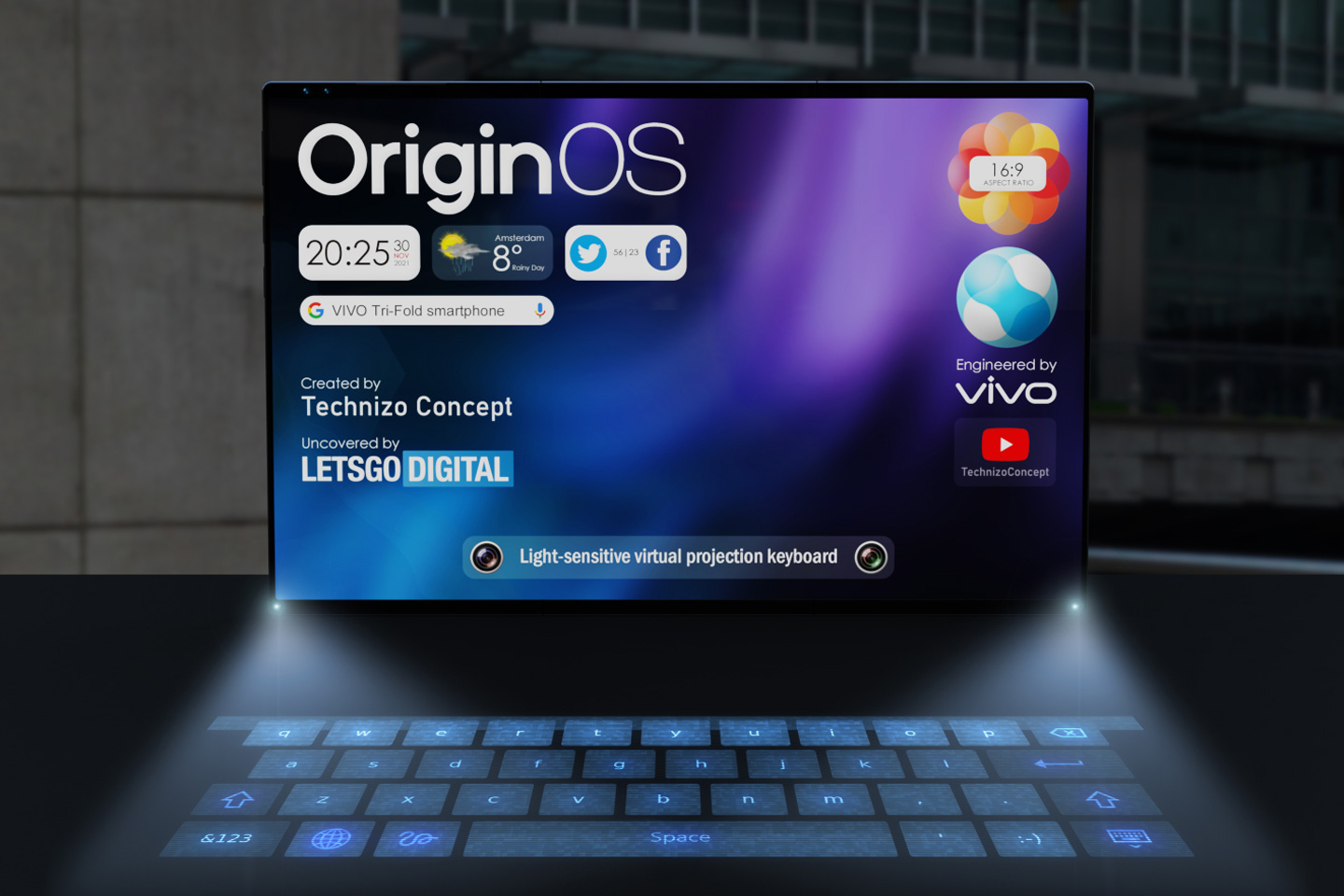 It’s a technology that’s a leap forward from Samsung’s SelfieType concept, which used the front-facing camera to let you basically type on a blank surface while the smartphone’s AI translated your finger motions into actual keystrokes. Instead, the Vivo phone concept literally projects a virtual keyboard on your table, giving you a large array of keys to comfortably type on. While the concept doesn’t really apply well to regular use (I’m honestly fine with using my thumbs to type messages on Slack or IG on my phone), it makes a world of sense for the WFH crowd, giving them a gadget that’s a phone, a tablet, and also a makeshift laptop… all in one device. 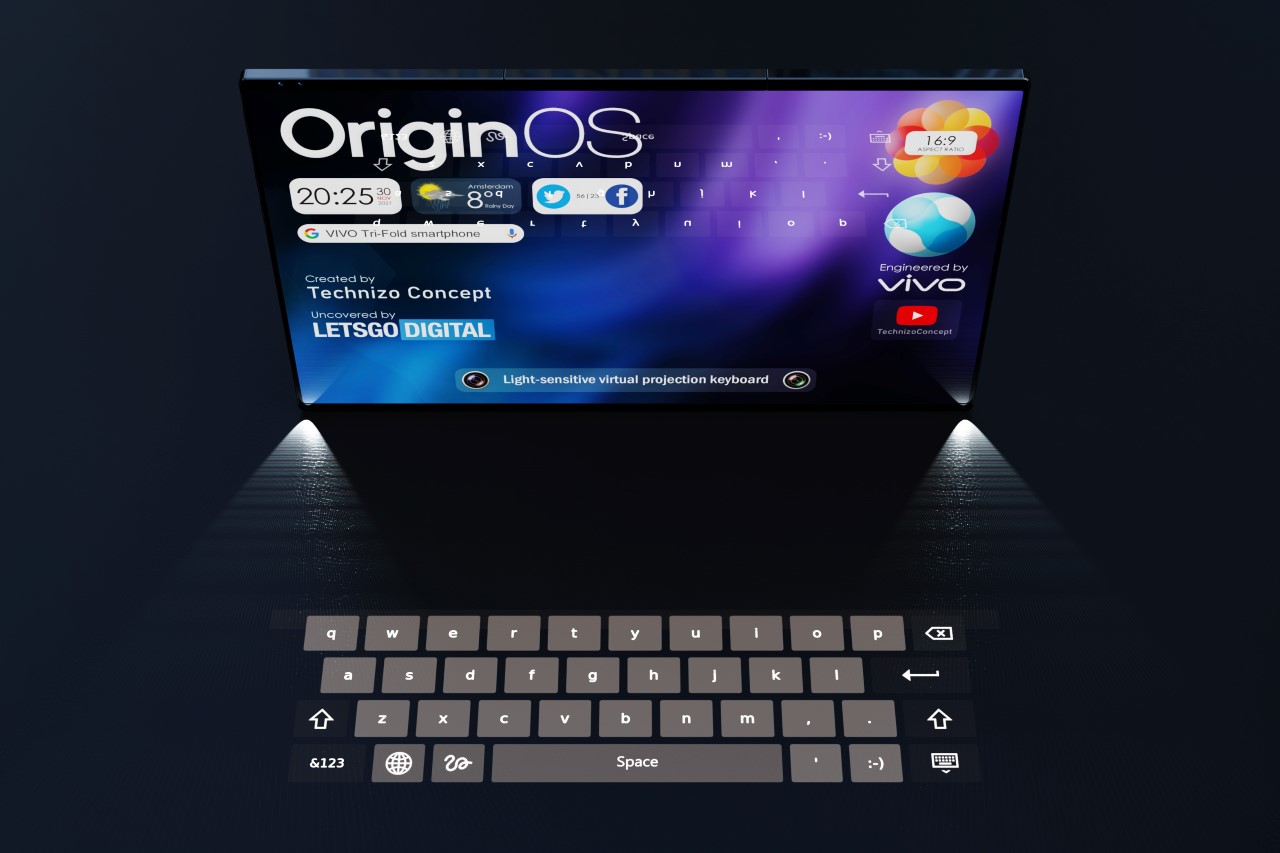 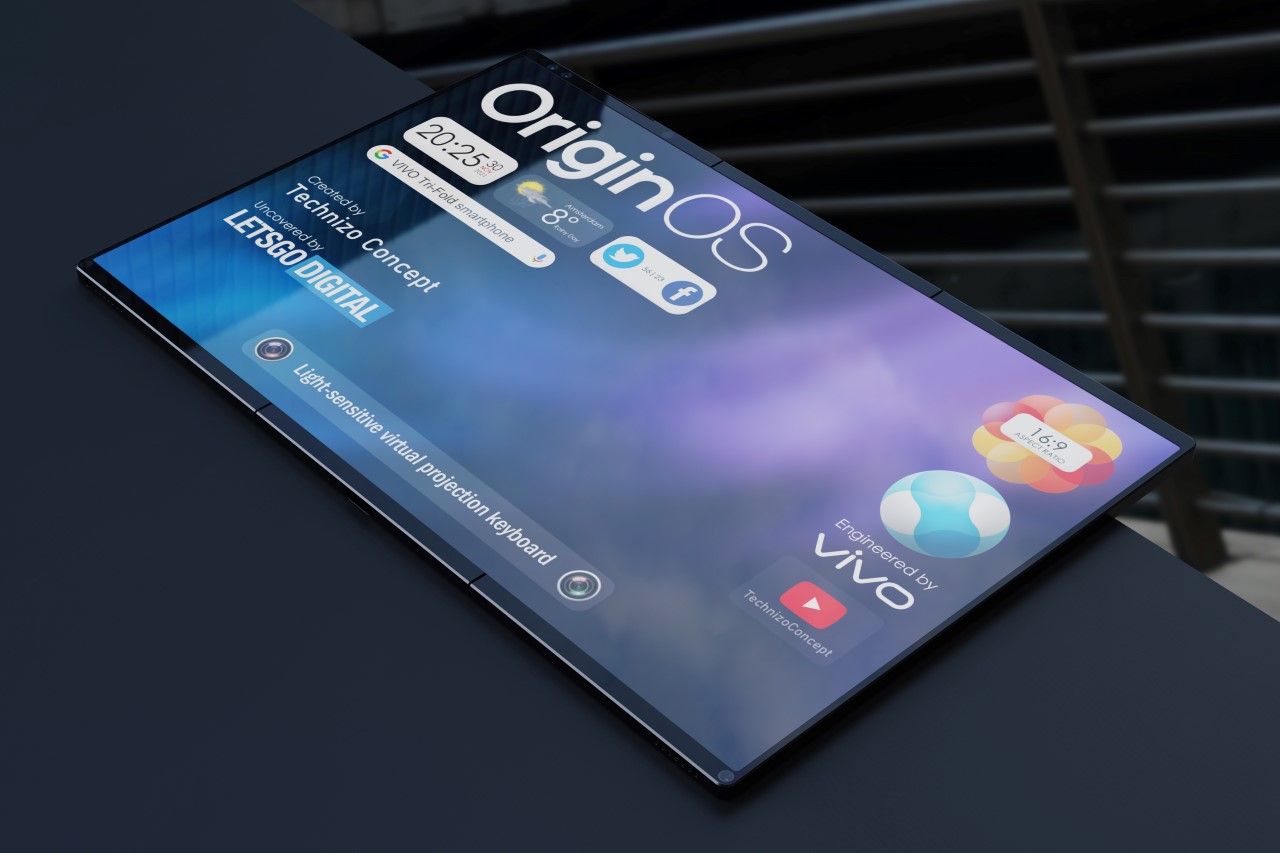 How Vivo would pull this off in real life isn’t really the question here. It’s a common practice for companies to pre-emptively file patents for concepts/technologies, even though they may not intend to launch them in the future. Rather, the idea here is to protect intellectual property, rather than inform customers of future launches. That being said, companies can’t file frivolous patents on concepts/technologies that don’t exist yet… which means somewhere in Vivo’s headquarters is a small R&D chamber with an actual 3-fold phone that has built-in projector lenses. Pretty cool, no? 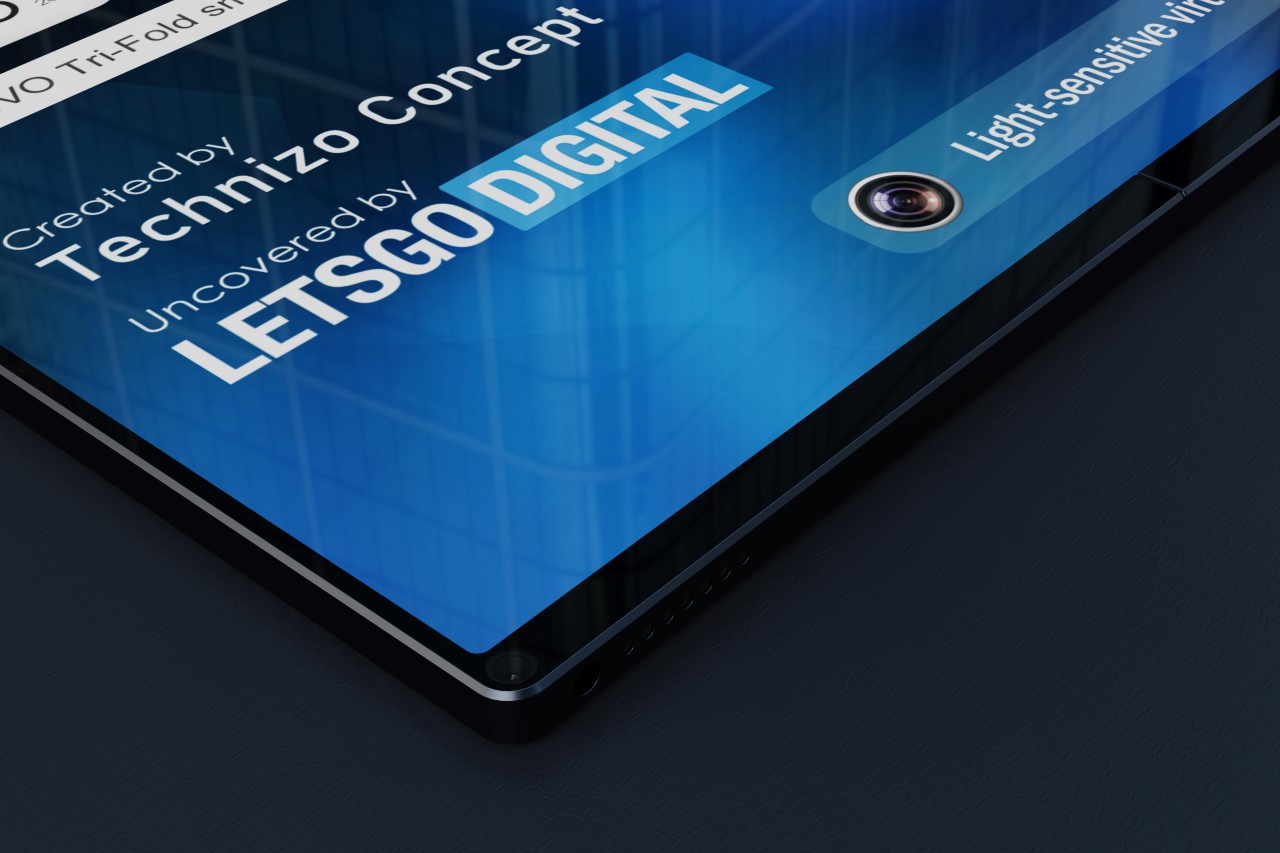 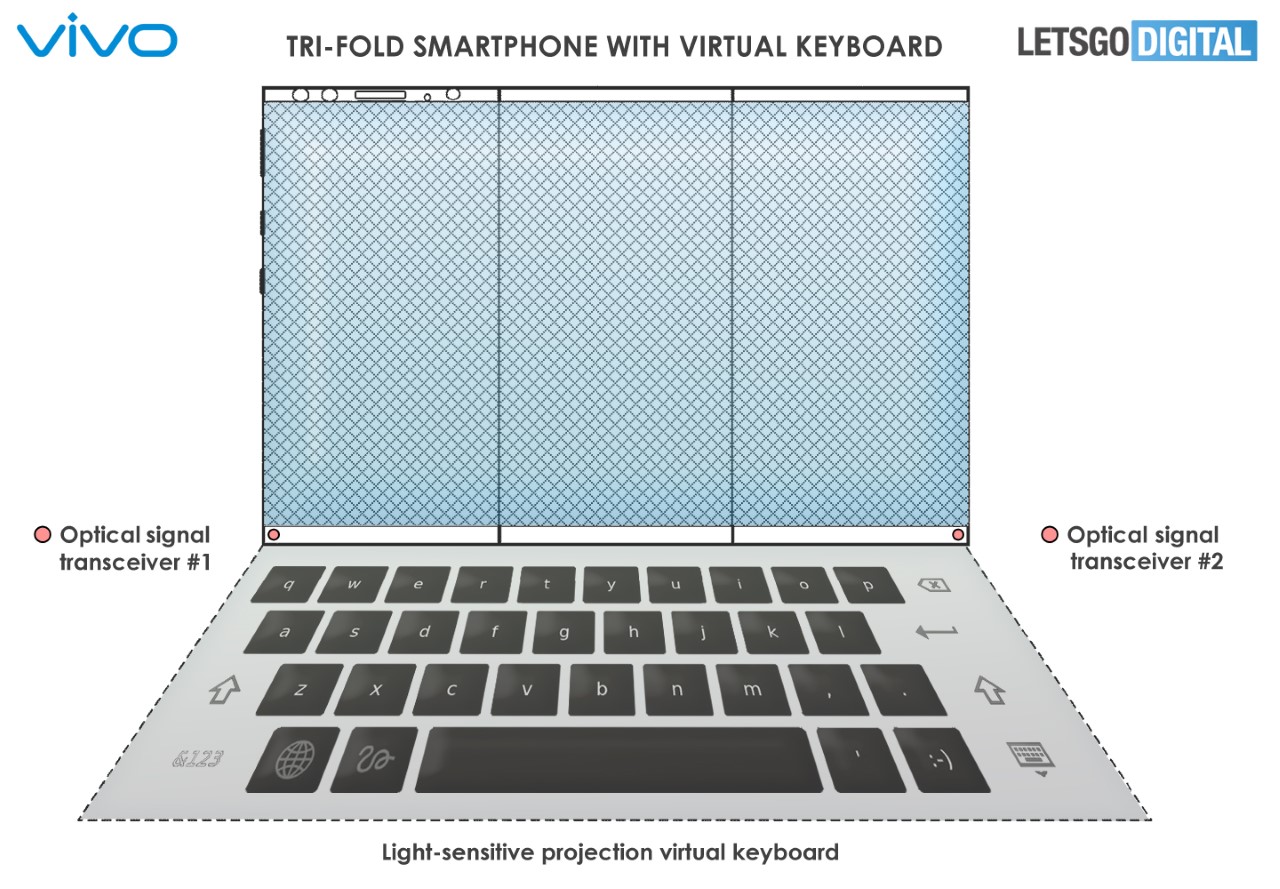 Images via LetsGoDigital and Technizo Concept

The iPhone 14 will need some out-of-the-box thinking if Apple wants to restore confidence in its design chops. Apple has always been lauded for how…

Quick Fix for the Flimsy iPhone 6!

Worried about your flimsy iPhone 6 or 6 Plus? Don’t be! The [BRIC+]xtreme case is here to protect your precious! Made of super durable aircraft…

Call Me Because You Light Up My Life

It seems in regard to electronic design, touchscreens are in and anything tactile is out. Tao Ma sees it the other way around. The Quartz…