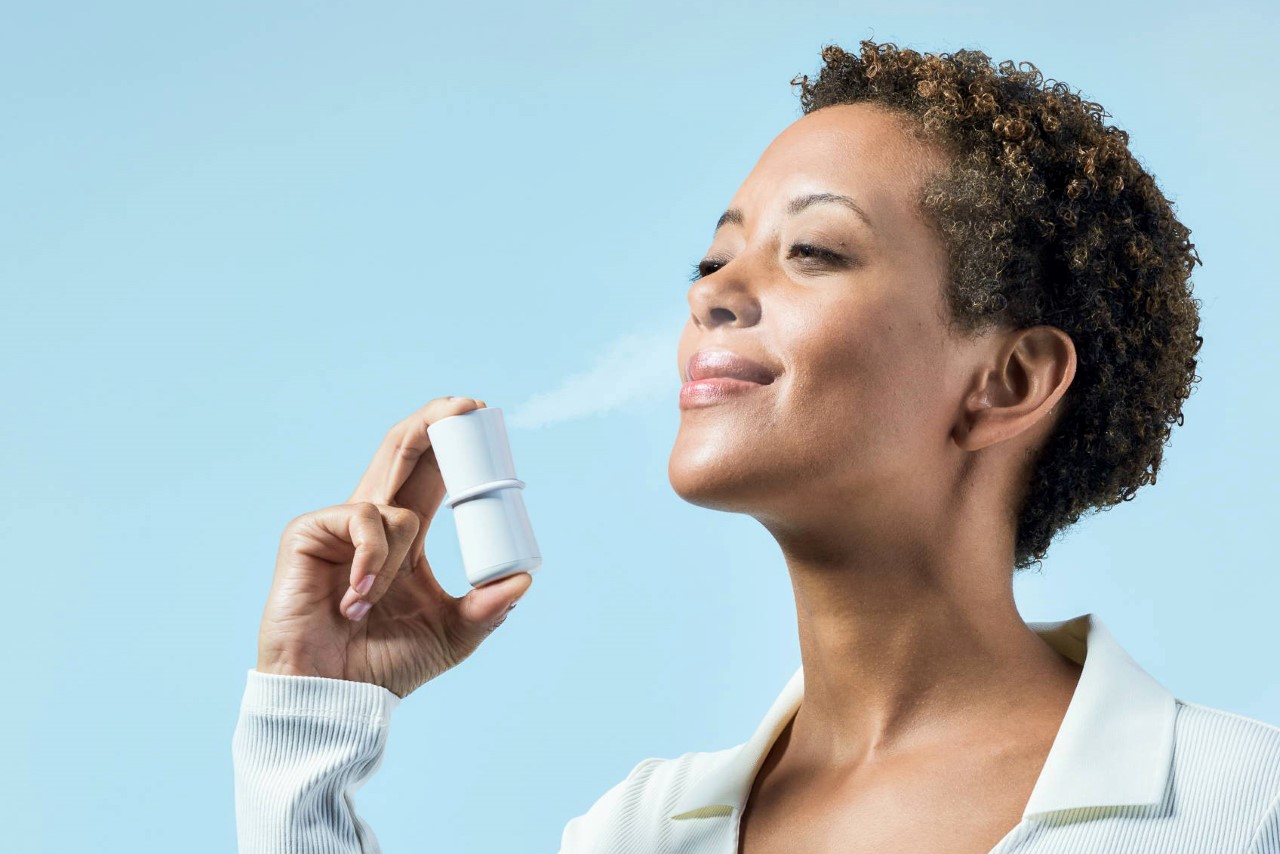 Just like you brush your teeth and take a bath every morning to protect yourself from sickness and bad hygiene, the Fend spray hopes to add one more simple process to your day, and in doing so, aims at drastically reducing the chance of transmitting or contracting any air-borne diseases. Formulated by Harvard professor, Dr. David Edwards, and encased in a vessel designed by Ammunition, the spray aims at reinforcing the nasal passage to prevent respiratory droplets from making their way out into the atmosphere.

While the topic of a mask mandate is enough to get the entire internet up in arms, the science behind it is, for the most part, pretty simple. Breathing causes respiratory droplets to fly out of your nose and mouth, which could carry viruses and potential diseases. The cotton face-mask simply serves as a physical barrier, preventing droplets from going out or traveling in… but the Fend hopes to fix the droplets at their very source.

The simple $25 nasal spray aims at reducing the number of respiratory droplets you breathe out by as much as 99%, drastically cutting the chances of spreading viruses or diseases. Invented in 2020 by Dr. David Edwards, an aerosol physicist by profession, during the initial spread of COVID-19, the spray is a special solution of saltwater fortified with calcium, which hydrates the mucus layer in your respiratory airways – your body’s natural defense system against airborne pathogens. A single spritz of the Fend’s liquid stabilizes the mucus, making you less likely to exhale droplets, and even trapping inhaled droplets so that they don’t make their way into your lungs. In clinical trials, FEND was shown to clean away up to 99% of respiratory droplets from the airways for up to 6 hours. You can read the peer-reviewed research here. 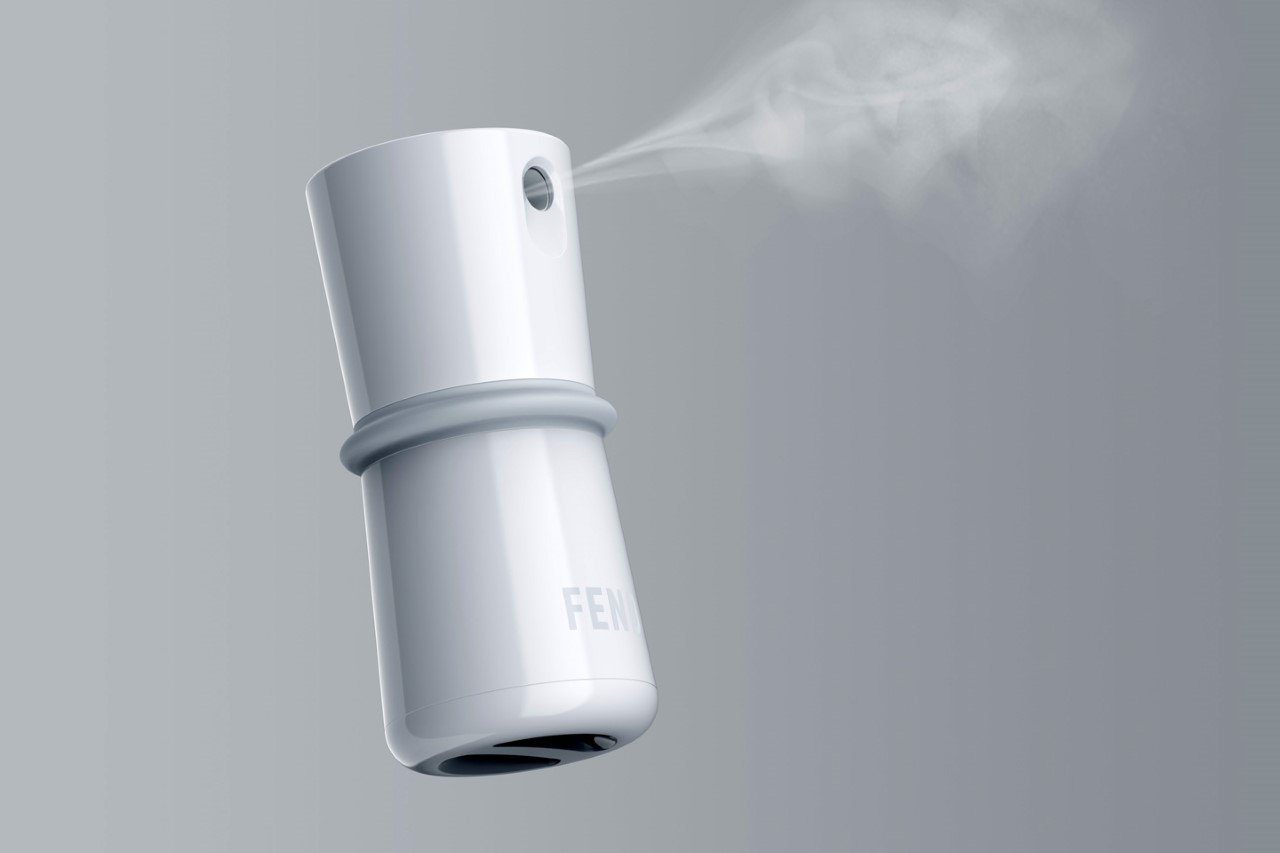 The spray is administered through a small, pocket-friendly mister vessel designed by San Francisco-based design firm Ammunition. Working off an older prototype of the Fend mister, which retailed for $50 and came with a glass bottle and a spray mechanism powered by batteries, Ammunition got to work, fixing all those previous pitfalls to make the design simpler, more cost-effective, and efficient. In an interview with Fast Company, Ammunition founder Robert Brunner highlighted all the problems with the previous mister design – “It’s too expensive, it’s fragile, it requires batteries, it’s heavy, it doesn’t travel well. To turn it off you have to take the batteries out.” 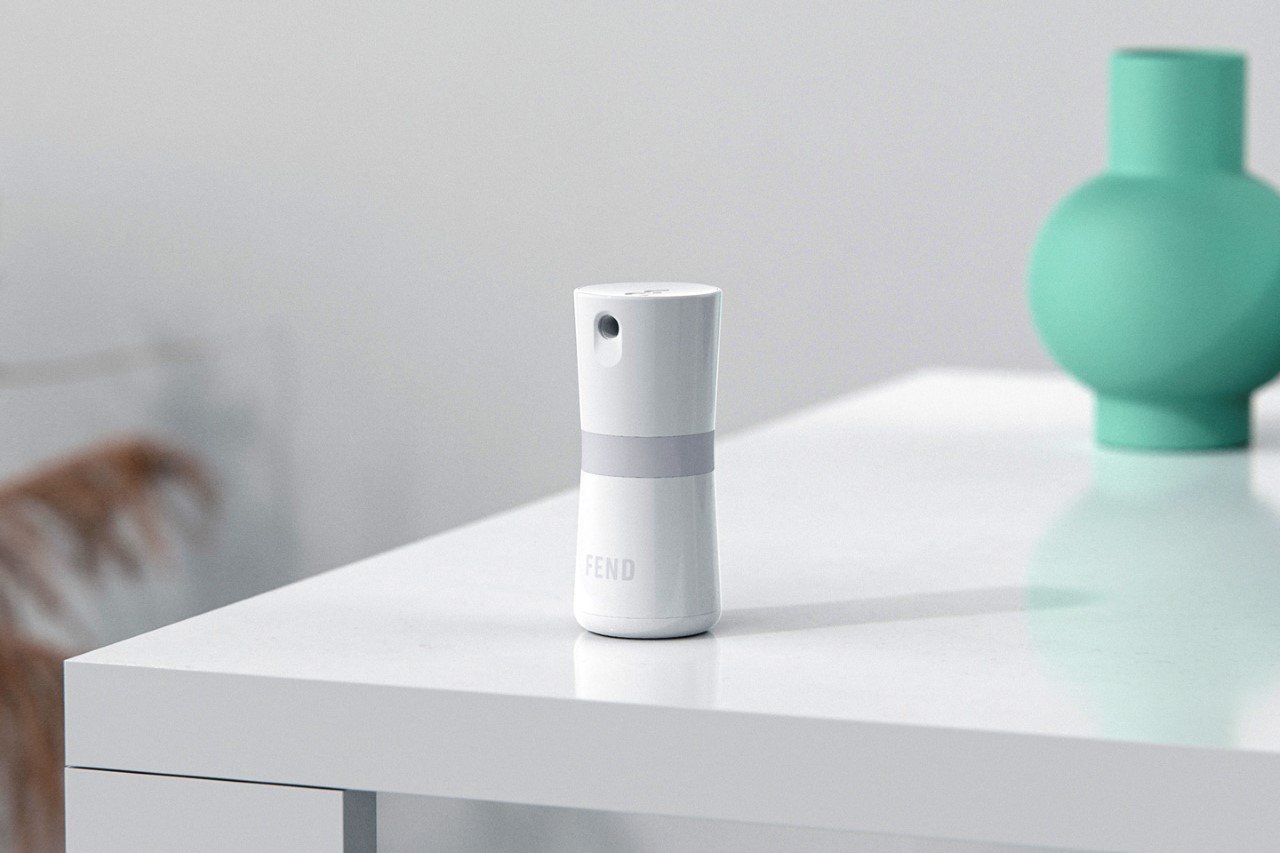 In its newer avatar, the Fend mister makes a few important design considerations. The new vessel is considerably smaller, operates without batteries, and comes pre-loaded with enough spray liquid to last an entire month with daily use. Its form looks nothing like those generic archaic nasal sprays or the L-shaped inhalers, a distinction that Brunner mentioned was incredibly necessary since the Fend is positioned as a modern health-and-hygiene product, and not something that would make the user self-conscious that they had some medical ailment. 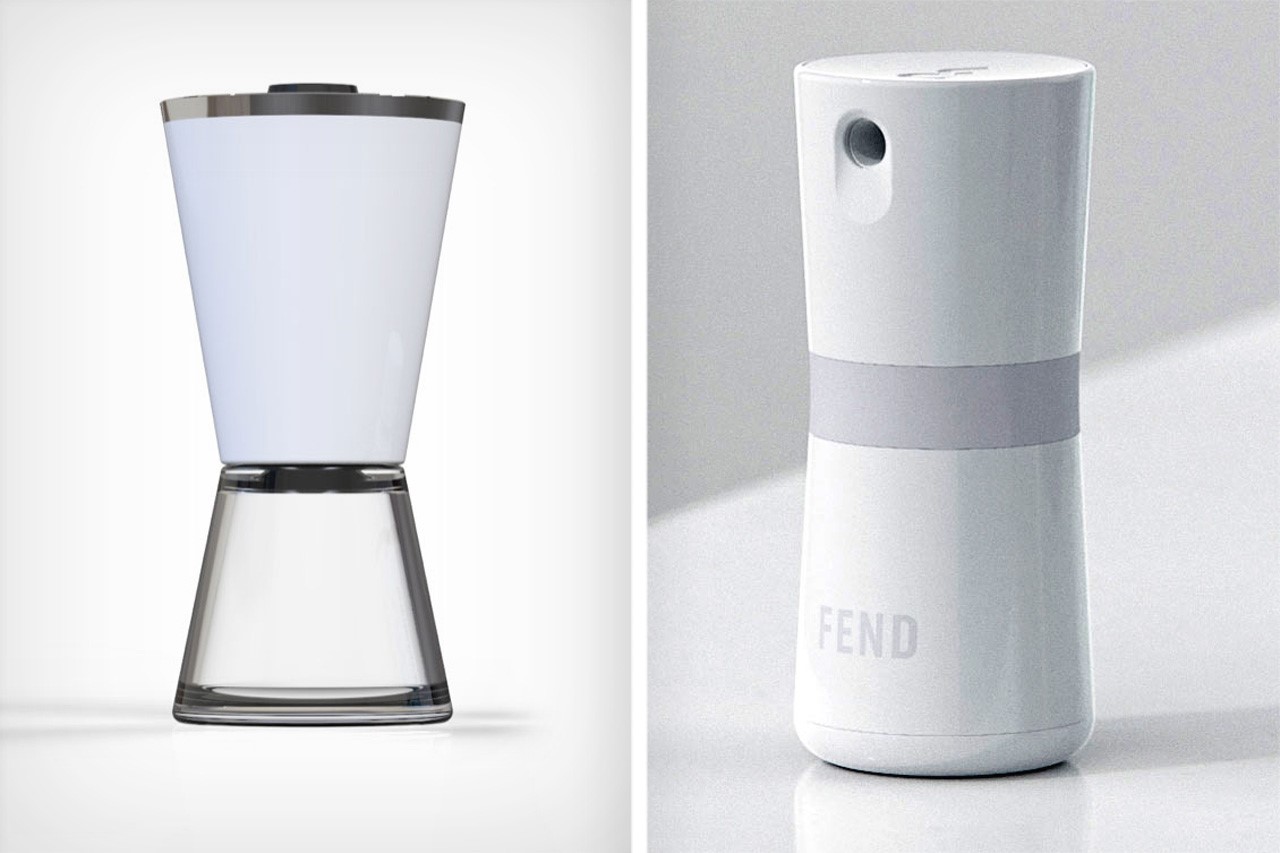 The new vessel does, however, celebrate the original Fend’s hourglass form. It comes with an opaque design, featuring two hourglass elements that press together, with a rubber waist in between that flexes when the spray is deployed. Small enough to be carried with you, and with an aesthetic that resembles more of a fragrance mister than a medical device, the Fend looks pure and comes with a fun, interactive design. The nozzle on the top deploys an ultra-fine mist of droplets perfectly small enough to travel through your nose right down to your trachea, where they help reinforce the mucus layer, giving you practically the same amount of protection from airborne diseases as a cotton mask. Designed to integrate into your everyday life, the folks behind the Fend recommend using it roughly twice a day, while you’re around people. Ultimately they hope that it becomes more of a common practice like flossing or popping a breath mint before going on a date, or deodorant before stepping out. I’d choose that kind of future over cotton masks any day of the week! 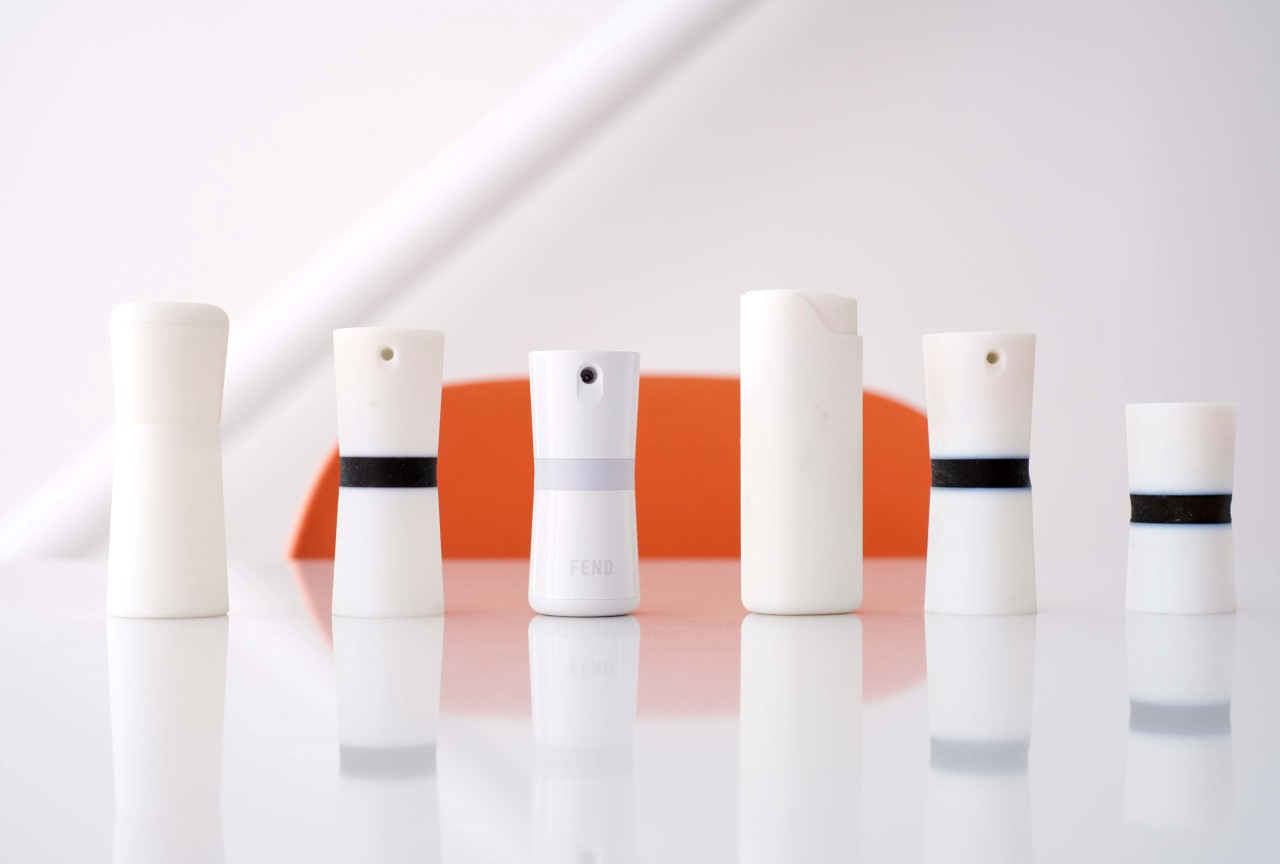 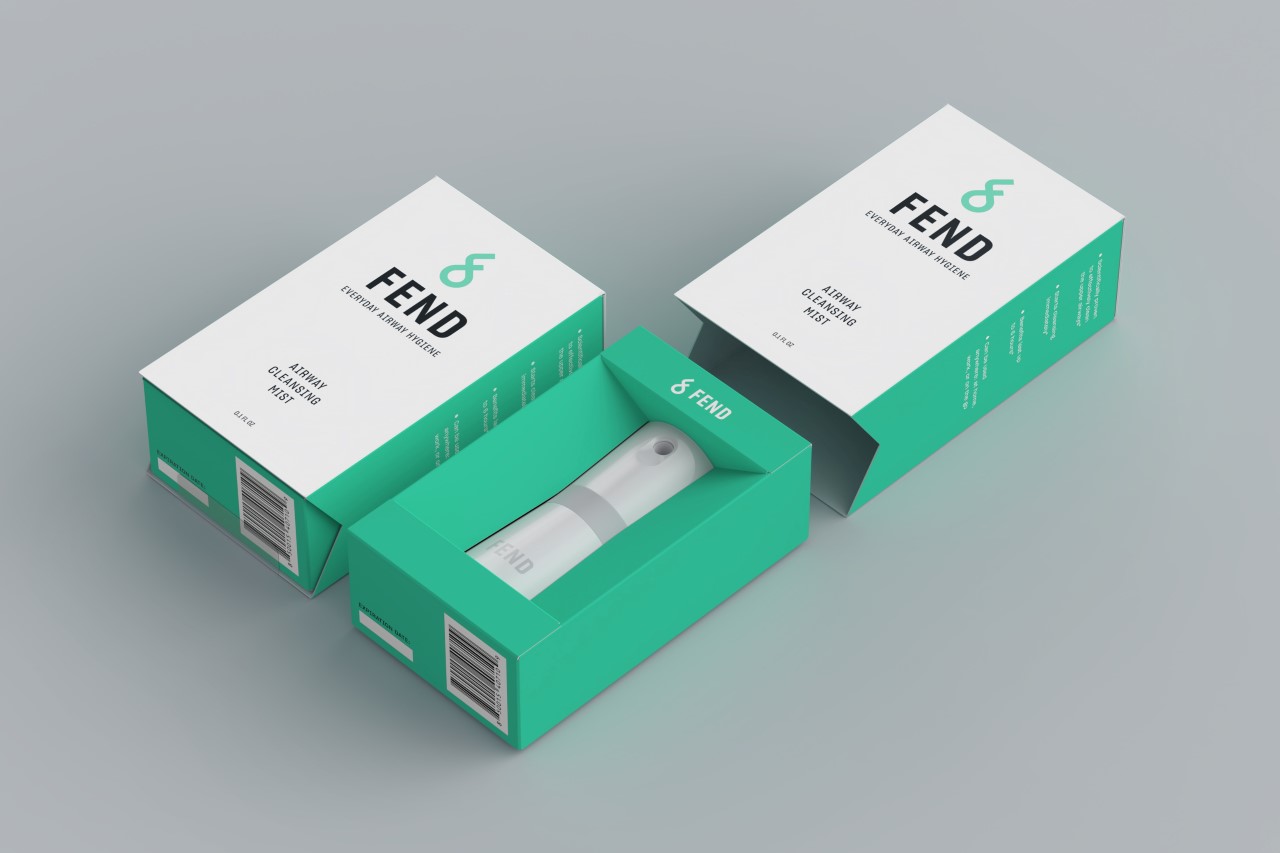 Sunrise is a toaster which is hung on the wall. Many kitchens, especially in New York City, do not have windows. The residents rarely see…

Plenty of lighting designs utilize reflective plates to maximize their output and direction, but none do it quite like the Eclipitic Lamp. A metal cone…

The beginning stages of wearing a hearing aid can be uncomfortable and embarrassing. Pulse is an auditory system aimed at improving this transition by providing…

Watchmakers have an uncanny way of drawing inspiration from fictional characters to connect with pop culture enthusiasts. For its latest inspirational outing, Bell & Ross…