I’ve never seen the tech industry take something as grave as air-quality more seriously than in the past 9 months. Yes, it’s fun to look at them disapprovingly as they, well, capitalize on the pandemic, but here’s what’s worth appreciating. The pandemic has accelerated innovation like never before. Think about it, it’s taken roughly 10 years to shrink purifiers from massive HVAC systems to stuff small enough to fit in rooms… but it’s taken just 10 months to shrink them further, to machines you can literally carry with you. We’re now in the age of wearable purifiers, small enough to fit in your pocket and around your neck, and powerful enough to rival purifiers 100 times their size.

A quick google search for ionizing air-purifiers will yield a variety of results that have one thing in common… they’re all home-appliances roughly 3-4 feet tall and occupying the same amount of space as a planter. By virtue of their internal components, ionizing purifiers aren’t necessarily portable, but the QUAIR hopes to change it. Roughly the size and shape of a walkie-talkie, the QUAIR comes with its own “bipolar ion technology”. In short, it deploys positive and negative ions into the air. These ions latch onto any possible contaminants in the air, extracting hydrogen and oxygen from them. The bacteria and viruses need hydrogen to synthesize energy, and without it, are immediately neutralized. The hydrogen is then combined with oxygen to form water vapor, killing the microorganisms in the air with zero emissions. The entire device is no larger than a bar of soap (nice metaphor for cleanliness, eh?), and is small and light enough to hang from your neck. The internal ionizer is accompanied by a powerful mini-fan that pulls air from the front, pushing it out the top. The fan covers a wide area around your face, practically creating a safe bubble of clean air around you. Sure, it doesn’t mean you don’t need to wear a mask (you still definitely do), but the fan helps increase the mask’s efficiency by ensuring that stray germs never make it to your face. Moreover, the rest of your face gets a shield of protection too, from your eyes to ears, and even your throat-area.

The QUAIR is powered by an internal battery, supplying it with up to 10 hours of run-time on a full charge. It also replenishes via USB-C, which means you can juice the QUAIR up at home or at work using your smartphone or iPad Pro charger. Available in multiple colors, the QUAIR’s currently running at an early-bird price of just under $60, and is estimated to ship as early as February 2021. 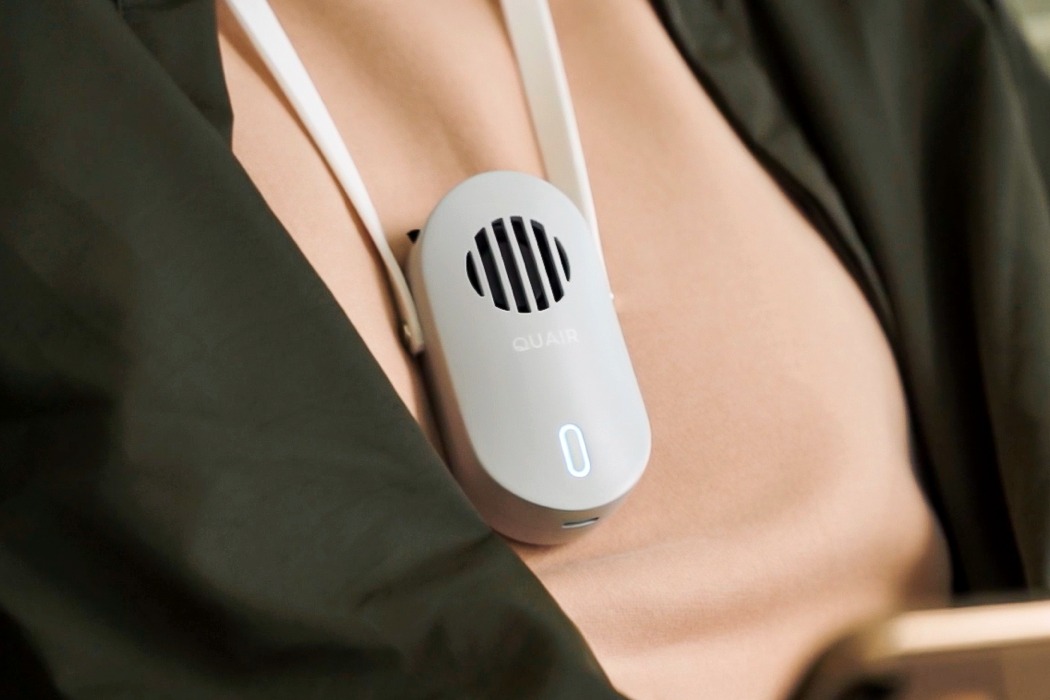 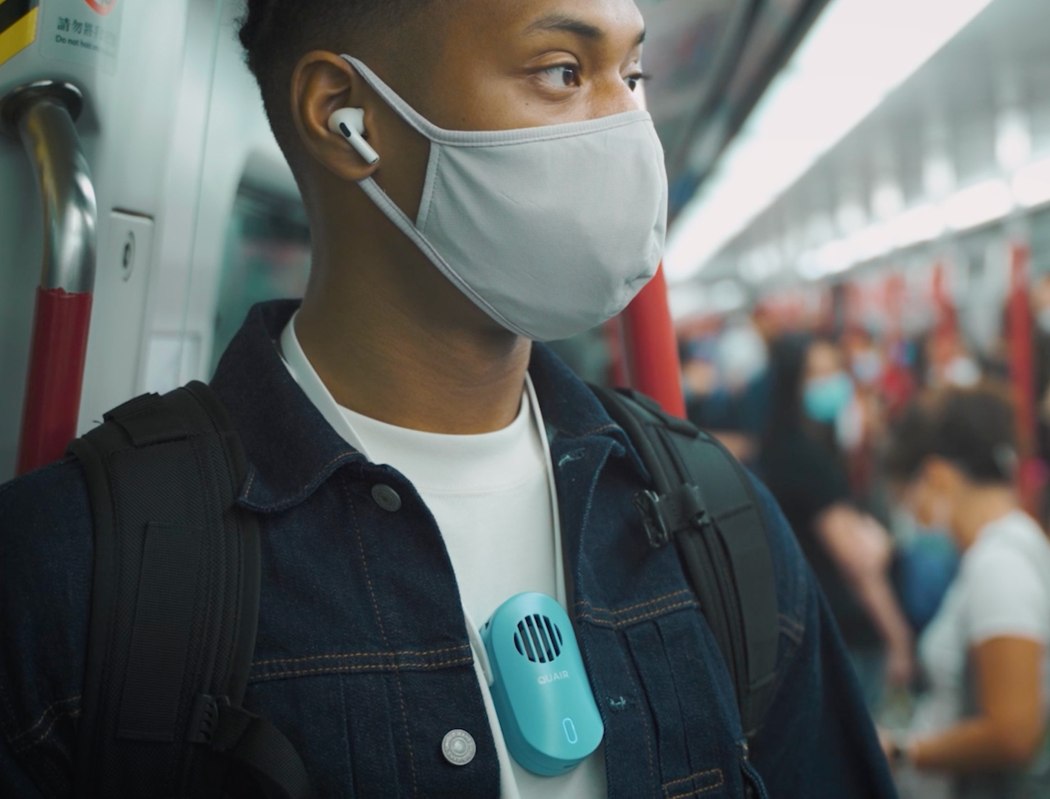 It’s all about those bipolar ions. QUAIR uses a two-step process:

1. Release positive and negative ions into the air
2. Spread them out with a miniature fan

Once airborne, these ions seek out airborne contaminants and fully break them down — much like heat-seeking missiles track down their targets.

Their positive and negative ions also induce a chemical reaction that extracts Hydrogen from viruses and bacteria. But viruses and bacteria need Hydrogen to survive, so this effectively breaks them down. That Hydrogen (H) then pairs with another byproduct of this reaction — (OH) — to form harmless H20 water particles.

With regards to those volatile organic compounds, our ions pair them with oxygen (i.e. they “oxidize” them) to a similar effect: breaking them down into gases that are natural to air (oxygen, nitrogen, CO2).

Again, it’s much better than simply dropping bacteria down onto nearby surfaces. Instead, those harmful particles are eliminated outright; no air filter necessary.

And the Quair Plasma Mini does all this quite effectively within a radius of 30cm — a perfect buffer to protect your breathing area.

Clean Air Isn’t the Only Perk

For all the Quair Plasma Mini does do, though, perhaps most important is what it doesn’t do: Produce harmful levels of ozone like most other portable ion-based purifiers. With Quair Plasma Mini, they’ve significantly cut down that byproduct, falling well below FDA and EPA upper limits for ozone emission to keep your lungs safe and healthy.

They also designed it for practical everyday use. Weighing in at only 85g, you can easily wear our purifier wherever, whenever.

That also meant that its battery life had to be long-lasting. So with a full charge (~2 hrs), you get a nice 8 to 10 hours of legwork. They went with a universal 5V power supply, which you can recharge with an easy-plug USB-C cable.

Another nifty project from Lysandre Follet, his Hello World camera takes wide angle shots of your worldly adventures and wifi’s them to friends (like the…

First we carried our mobile phone everywhere. Then when phones could store music, we carried earphones everywhere. Now that phones have become miniature computers, the…