There’s a rather fascinating episode of Ugly Delicious on Netflix that’s dedicated exclusively to rotating meats. The concept of evenly cooking a piece of meat using a rotating method has existed for thousands of years and can be found in practically every cuisine. The job of rotating the meat was usually designated to a lowly individual known as the ‘spit jack’, and one of Da Vinci’s contraptions even tried to mechanize it, so that it would automatically rotate without needing someone to manually turn it. In fact, the complexities of Da Vinci’s contraption eventually went on to stimulate the invention of the clock! Eventually, the rotisserie was born, and it found its way into European cooking. The idea was to horizontally rotate the meat over a fire, and gradually it evolved into the rotisserie oven which cooked the meat from the top as well as the bottom, while a plate under the rotating meat helped collect the dripping fat. Heck, my mouth’s watering already.

The ROTO-Q 360 helps evolve that setup a wee bit further by scaling it down and making it more affordable + accessible. Designed to slide right into any regular oven or be placed on a pellet grill, smoker, or even a campfire, the ROTO-Q 360 is a foldable spring-operated rotating spit that doesn’t use electricity, fuel, or gas. It comes with an easy-to-store foldable design that opens out and fits in any standard oven. The spring-loaded gearbox at one end lets you set the rotating time, while a set of skewers let you mount your meat right onto the ROTO-Q 360 and into the oven. All you do then is run the oven like you normally would, and your roast-chicken turns into a fancy rotisserie chicken. The rotating setup helps your meat cook evenly while staying incredibly juicy on the inside, because the fat with it keeps getting circulated within the meat. For the excess fats that drip off the meat, the ROTO-Q 360 features a nifty bed-tray below the rotating skewers… a design detail that has two-fold benefits. Not only does the dripping fat make your meat less oily (and more healthy), you can even layer the bed-tray with veggies and have them cook right in the fat, giving you rotisserie meat and roasted veggies all in one single cook!

Things get even more interesting when the ROTO-Q 360’s add-ons come into play. The various add-ons help you cook more than just a whole chicken, allowing you to use your oven in a variety of interesting ways. Aside from the standard rotisserie rod, the ROTO-Q 360 packs newfangled attachments like multiple kebab skewers, sausage-cradles for hot-dogs, steak cages, and cylindrical rotisserie cages for baking stuff you’d normally fry, like chicken-wings. With a little bit of creativity, you could even roast your own coffee beans in your oven too! The attachments retrofit right onto the ROTO-Q 360, which universally fits in every household oven, giving you the ability to do more with it and take it to new levels.

Designed to put a rotisserie in every home (because buying a special rotisserie oven could set you back a couple of grands), the ROTO-Q 360 costs a mere $49 and comes in all-metal and folds right down to easily fit into a drawer when not in use. Cleverly designed with spring-loaded mechanical components, the ROTO-Q 360 can rotate for a full 60 minutes at a time. When you’re done, the rotating gearbox slides right off, allowing you to put the rest of the rotisserie in a dishwasher, or even clean it in your kitchen sink. The entire setup weighs a little over 5 pounds, and can be used either at home, or carried over to a friend’s house or barbecue party. Along with those attachments, the ROTO-Q 360 lets you cook up a veritable storm, doing much more than making a 5-star rotisserie chicken, allowing you to foray into seafood, red meats, and even roast veggies in a variety of ways. Designed to upgrade your roasting repertoire, much like a good cast-iron skillet upgrades your pizza-baking repertoire, the ROTO-Q 360 helps you make great tasting, healthy food… right in your oven! 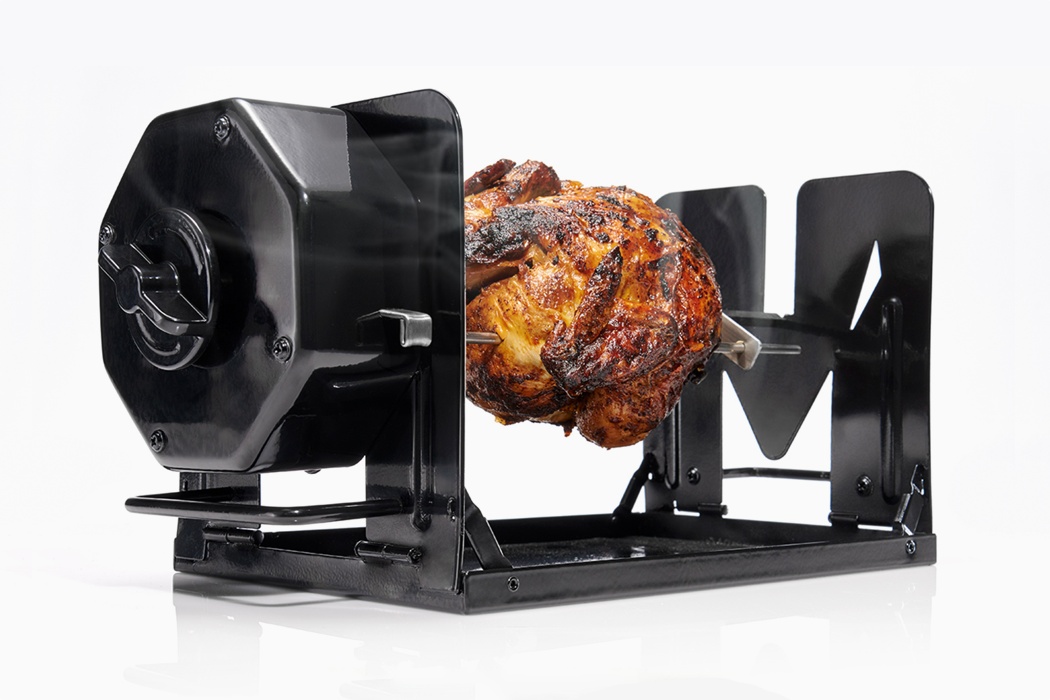 Taking up minimal space, ROTO-Q 360 self-rotating appliance, automates the entire rotisserie process so that all you need to do is set it up, turn it on, and let it do its job. ROTO-Q 360 does not need any power, gas, or fuel to run, so you never need to worry about keeping any tanks filled or charged either.

Fits into Your Oven 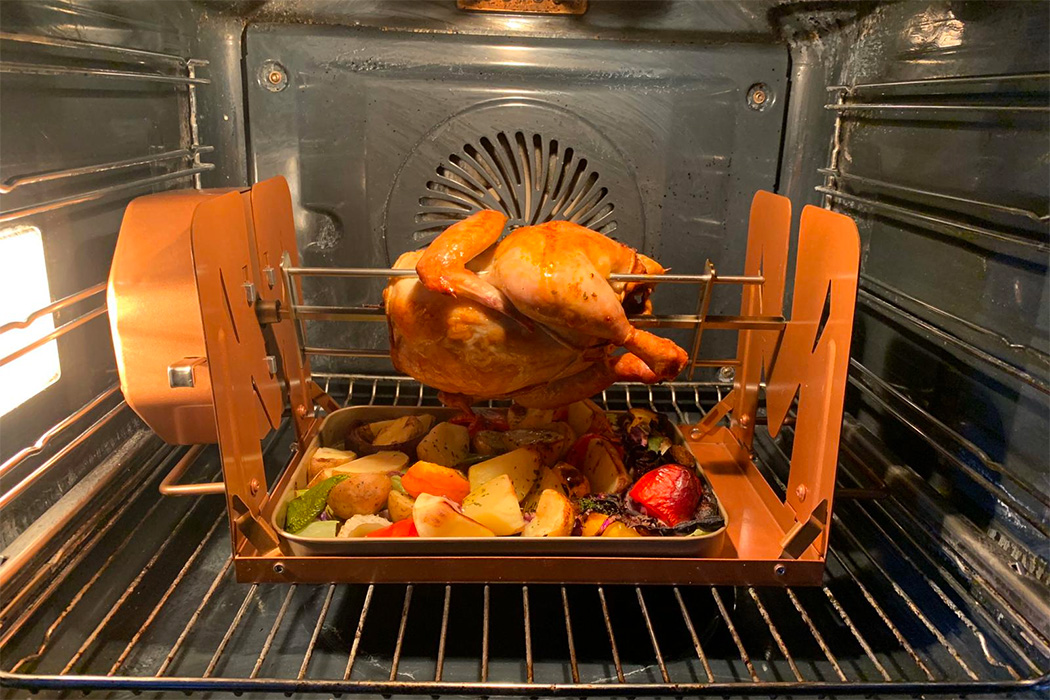 The ROTO-Q 360 has been engineered to fit into any home. If you own an oven – and everyone owns an oven – you can put ROTO-Q 360 into your kitchen. This is a portable device that you can set up as you need it, even carting it off somewhere else for the night. 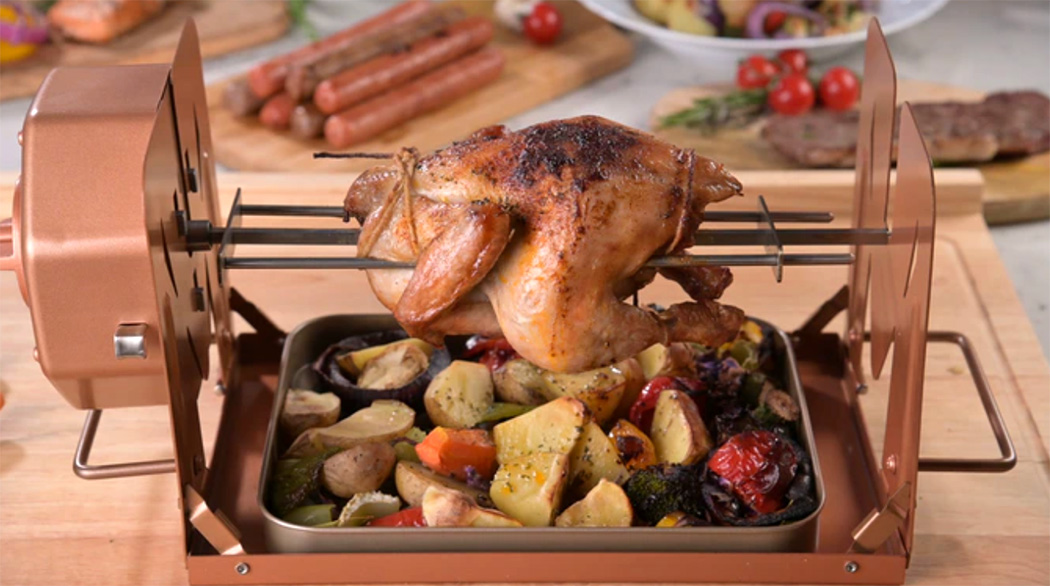 The ROTO-Q 360 has achieved perfection in cooking the rotisserie cousins while cutting down cooking time by as much as 30%. Since the ROTO-Q 360 brings down the cooking time, energy expenditure is also less which in turn saves your money.

Traditional methods of rotisserie cooking require industrial-style appliances with electric driven motors. These devices are much more expensive (ranging from $250-$600) also not portable and take up a large amount of space in your kitchen.

Furthermore, cooking chicken in a crockpot or tray by roasting or baking takes a long time to prep 5-6 hours, and sometimes leaves it uncooked or soggy from the bottom side. ROTO-Q 360 will never cause this problem because it cooks the food from all sides through its 360 degrees rotating mechanism. So there is no need for adjusting, stirring or flipping in the middle of cooking, and no more rubbing more butter or oil.

Utilizing a gearbox that stores kinetic energy when the knob of the device is turned, the ROTO-Q 360 does not require any additional electricity or fuel to operate. The cooking time can be set by manually turning the knob a specified number of rotations, to achieve the optimal cooking time for a wide array of food items.

As the food turns, unwanted fats and grease drip down into the drip tray for healthier results.

Rotisserie in action: speed up 8x 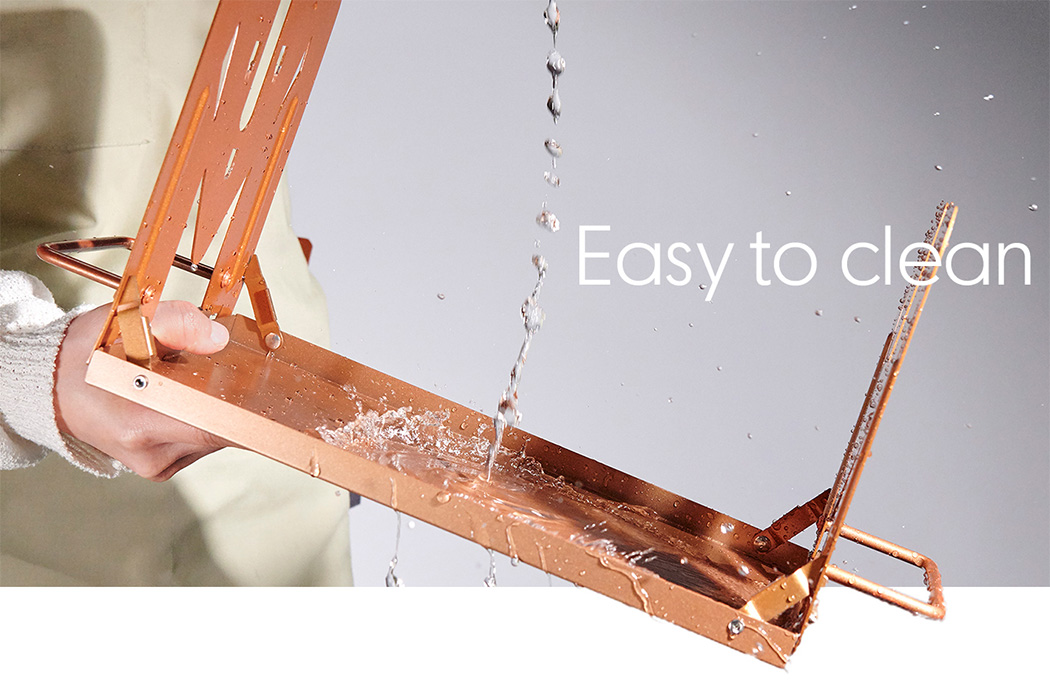 Completely non-electric, ROTO-Q 360 could not be any easier to clean. The components pull apart for simple rinsing, cutting down drastically on the clean-up time after every meal. Much easier to clean than a traditional rotisserie machine.

The ROTO-Q 360 is a portable device that you can set up as needed, even for chefs on the go. It folds down into a size that will fit into any kitchen drawer as well, and it will not take up counter space, unlike other bulky food machines.

Enjoy Rotisserie On To Go 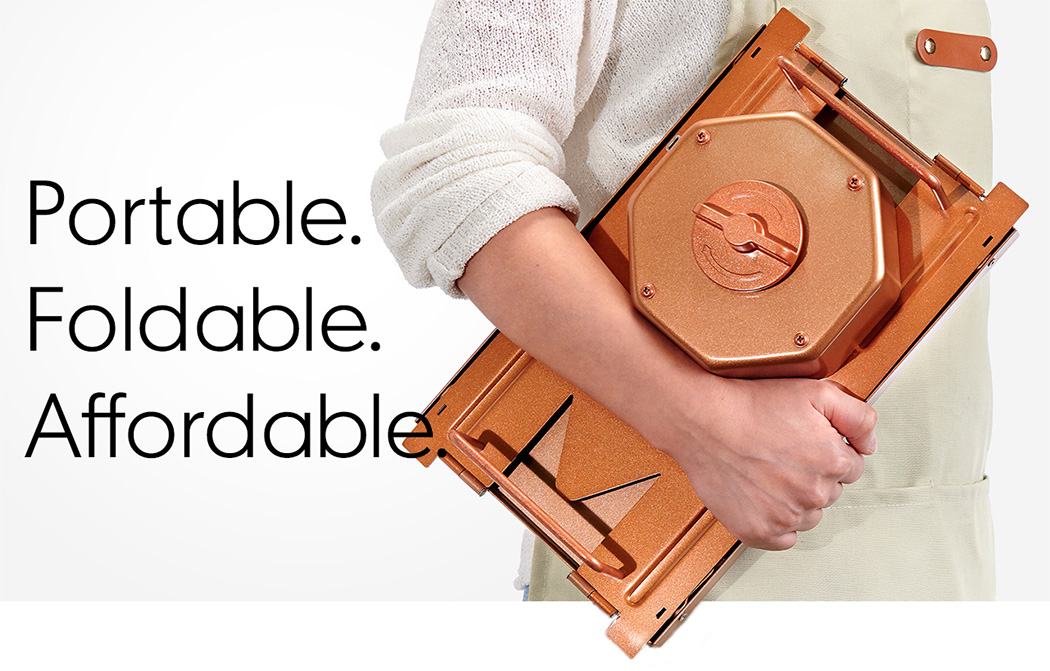 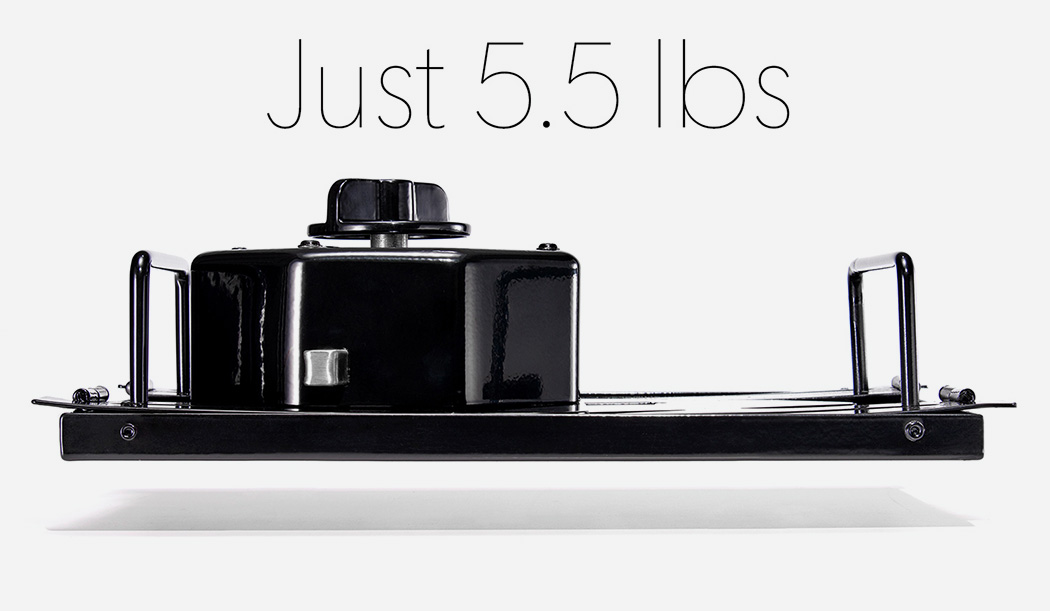 The entire unit weighs in just 5.5 lbs (2.5 kg), the portable size ROTO-Q 360 could easily fit in any backpack making it a perfect companion for hikers, campers, outdoor enthusiasts to carry around. The compact design of the ROTO-Q 360, makes it convenient to transport the device and attach it to Gas/Charcoal grills, fire pits, etc. for use while traveling, camping, or tailgating. 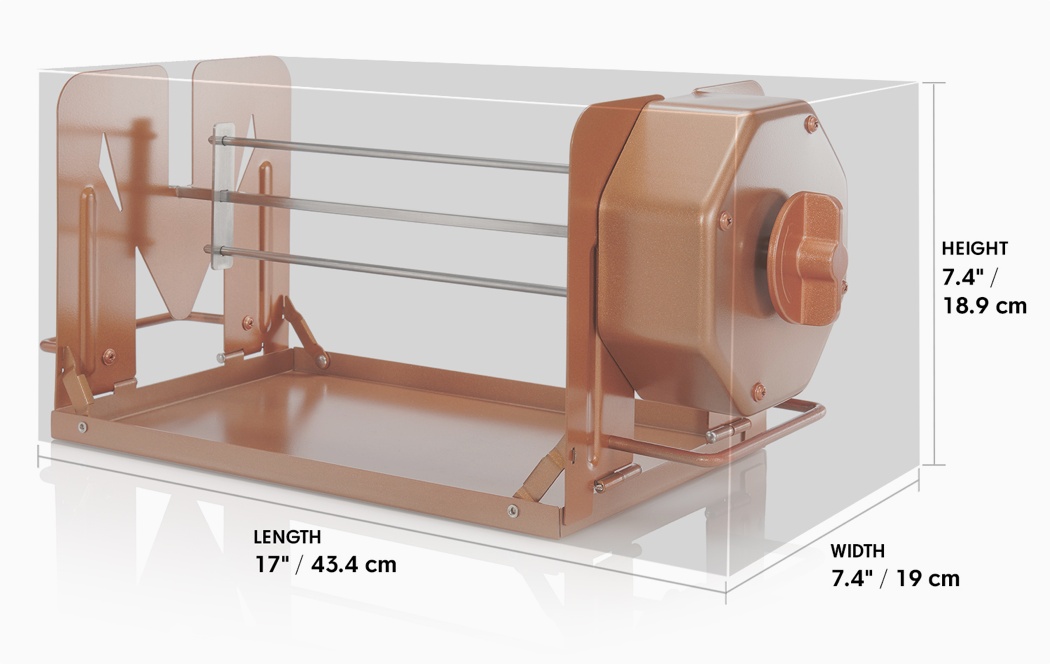 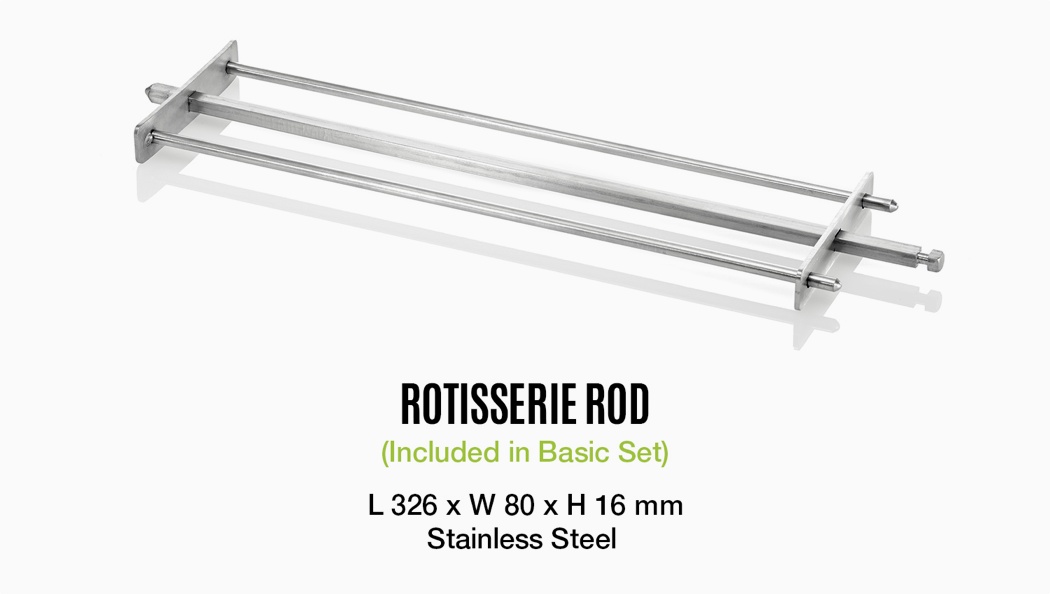 The ROTO-Q 360 can cook various types of meat, fish and poultry (up to 5 lbs.) in 60 mins. or less. Additionally, by utilizing one of the many accessory attachments available for the device, you can further utilize your ROTO-Q 360 to cook other non-meat food items, such as potatoes, fries, and roasted vegetables. 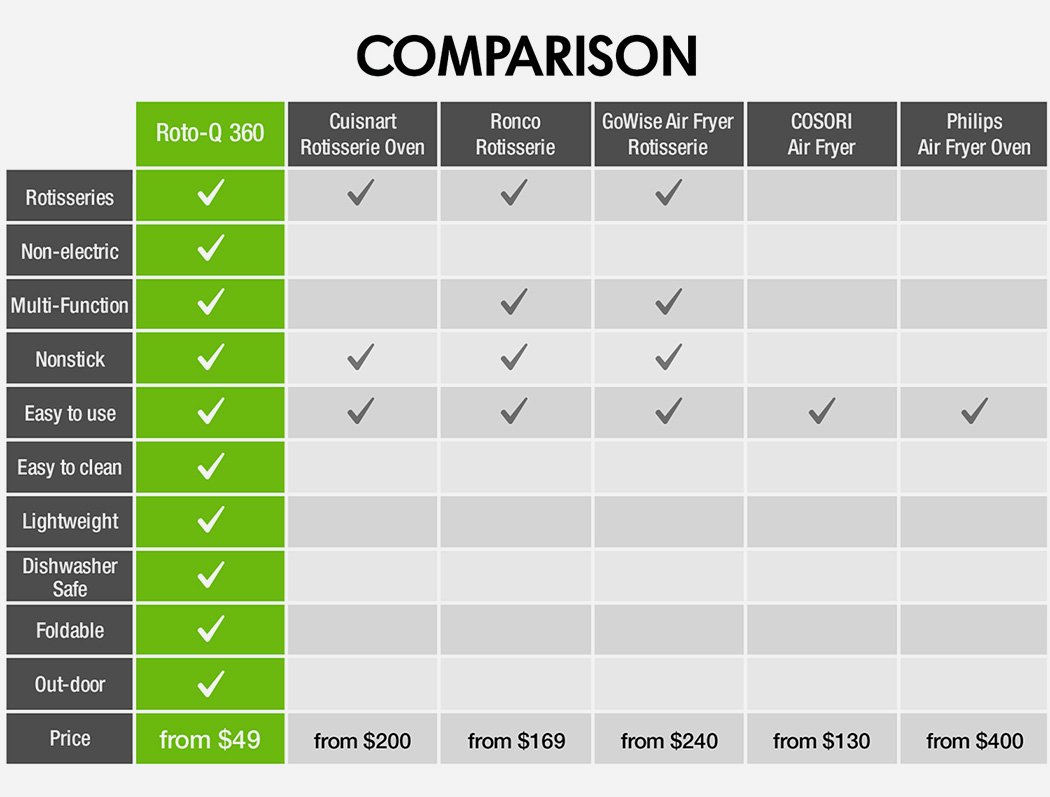 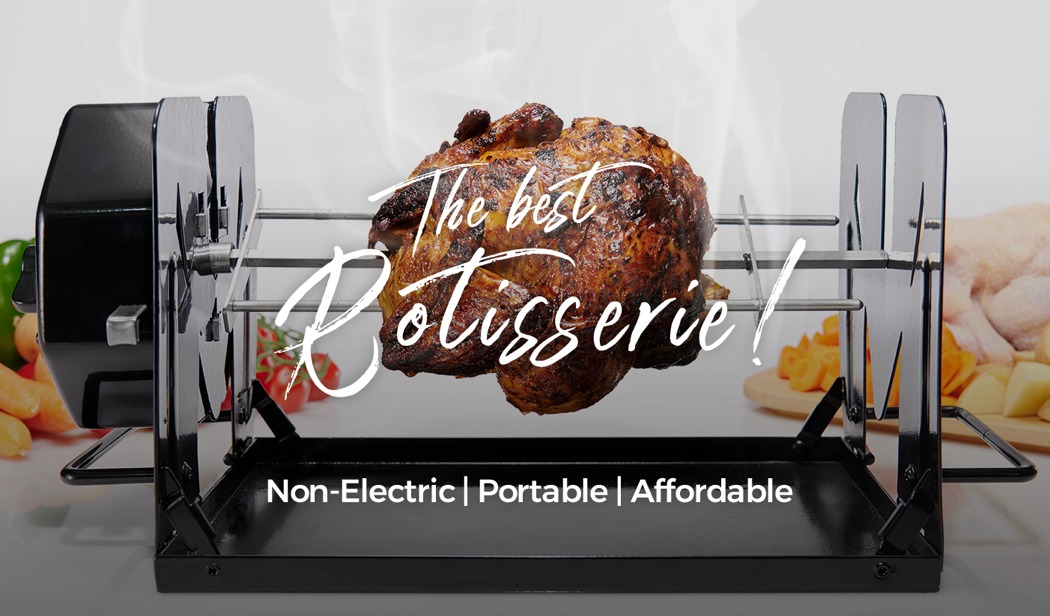 Luminos are bricks in darkness. Like a candle needs a fire to light it up, Luminos, which have light sensors and LEDs, need light to…

Your Own Kitchen Hideaway

The Kitchen Hideaway is a peep into what food prep might be like in the future. A helmet and viewport allow you to image what…

A functional kitchen countertop that employs magnetism to make optimum use of the vertical space available in a kitchen. Truly, a clever countertop design apt…

This Xbox controller accessory adds extra buttons to the back, upgrading it to an Elite Controller

Casually sitting on the rear of your Xbox controller, the ARMORX Pro gives you a secret set of keys and controls that allow you to…