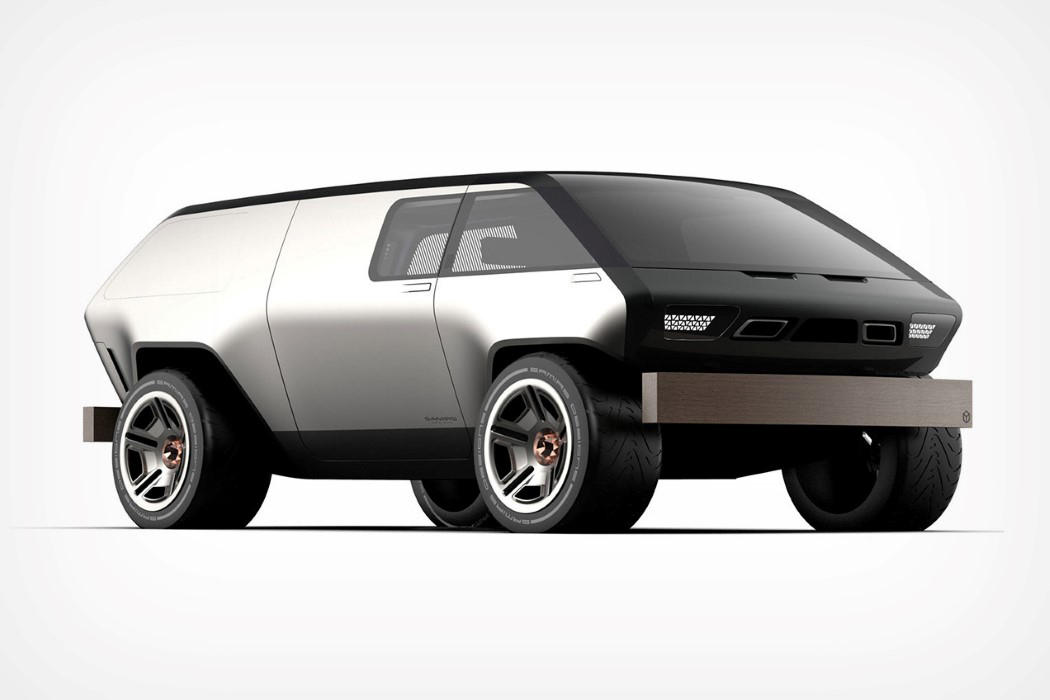 Tesla was just named as the most valuable automaker as its shares surpassed $1000 mark. The electric car company overtook Toyota in the race and was valued at $190 billion (at the time this story was written) earning it the top spot on the coveted global list. The boost came after Elon Musk sent an email to his employees that said the company’s new semi-truck was ready for “volume production”. Tesla has climbed up the ladder of the automotive world rather quickly thanks to their ‘drive’ to constantly innovate. While they turned the tide on electric cars that people actually wanted to own, Tesla was also highly regarded for its modern, futuristic design by non-automotive designers and design enthusiasts all over the world. It inspired a whole genre of design aesthetic that spilled over to architecture, phones, bikes, shoes, and even surfboards! The California-based company is now an iconic global brand apart from spearheading the electric vehicle industry. The Tesla-inspired designs range from sleek to outrageous but you can’t look away from it and that shows its power. Elon ‘musk’ be very happy! 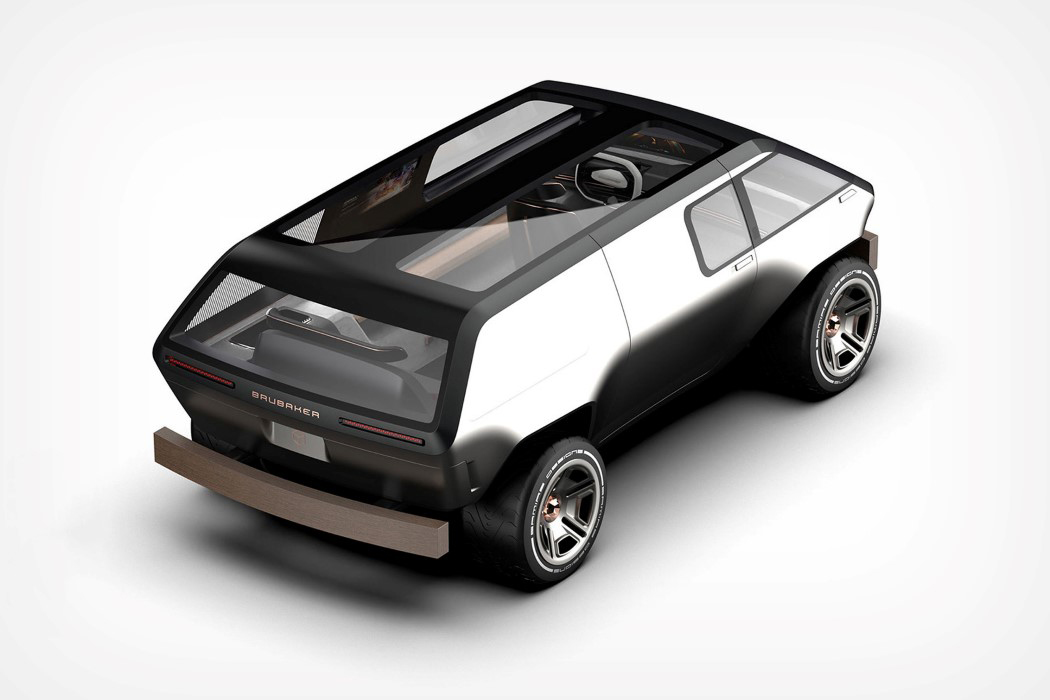 Named after the very man who pioneered the edgy, angular, low-poly aesthetic, the Brubaker Box by Samir Sadikhov is a minivan inspired by the designs of Curt Brubaker – whose work also directly influenced design of the Tesla Cybertruck. The Brubaker Box is essentially for families who want to adopt the Cybertruck aesthetic without necessarily buying a pickup. Made possibly for edgy soccer moms, the minivan comes with a slightly softer low-poly design that’s more approachable and friendly (after all, you want to look more like a family person and less like you’re Mad Max-ing your way through life). 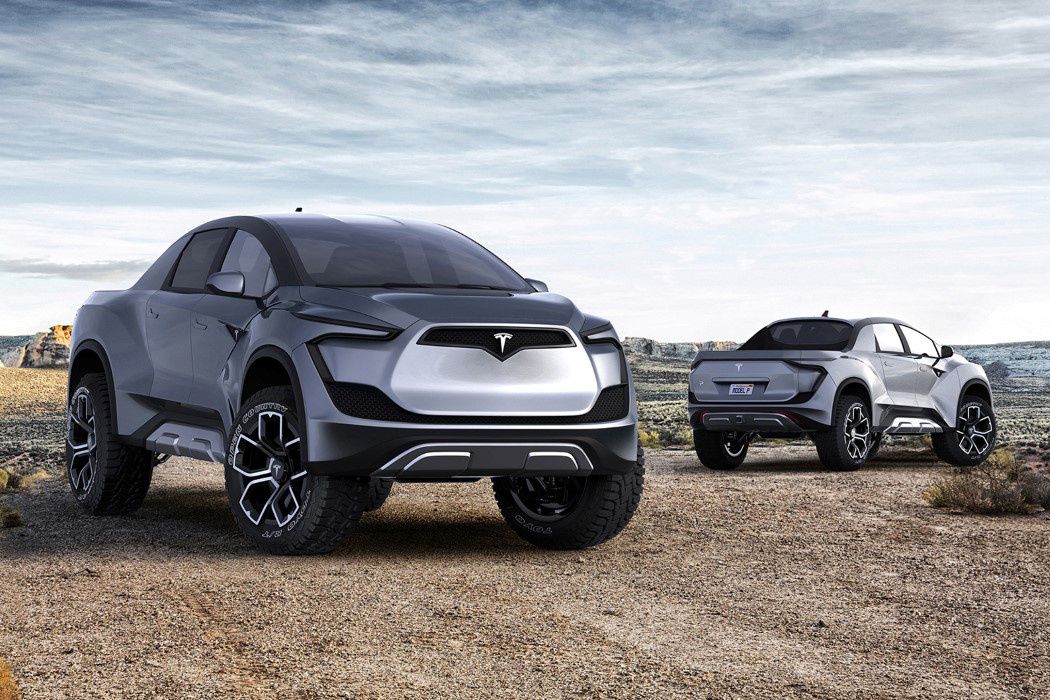 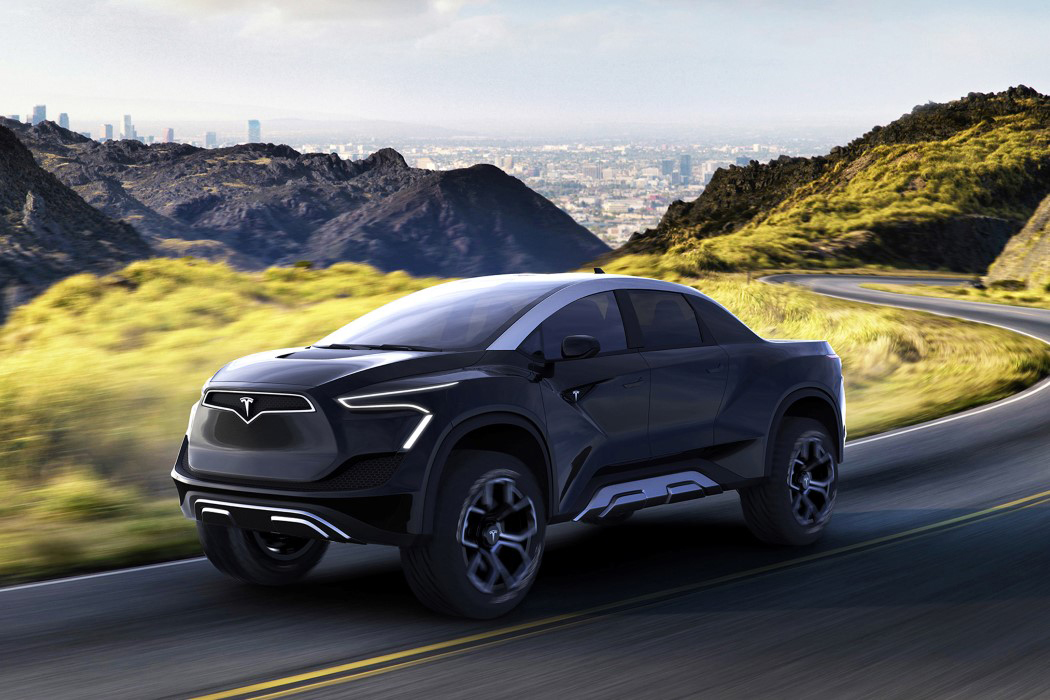 It’s a shame that this conceptual Tesla pickup is fan-made because it’s an absolute beauty! Designed with the sheer attention to detail, the pickup is envisioned as a part of Tesla’s Model P series, by Istanbul-based designer, Emre Husmen. The conceptual Model P 2019 (let’s just call it that for now) is a brilliant exercise in brand and form semantics… that’s a fancy-design-jargon way of saying that it looks exactly like something Tesla would launch. 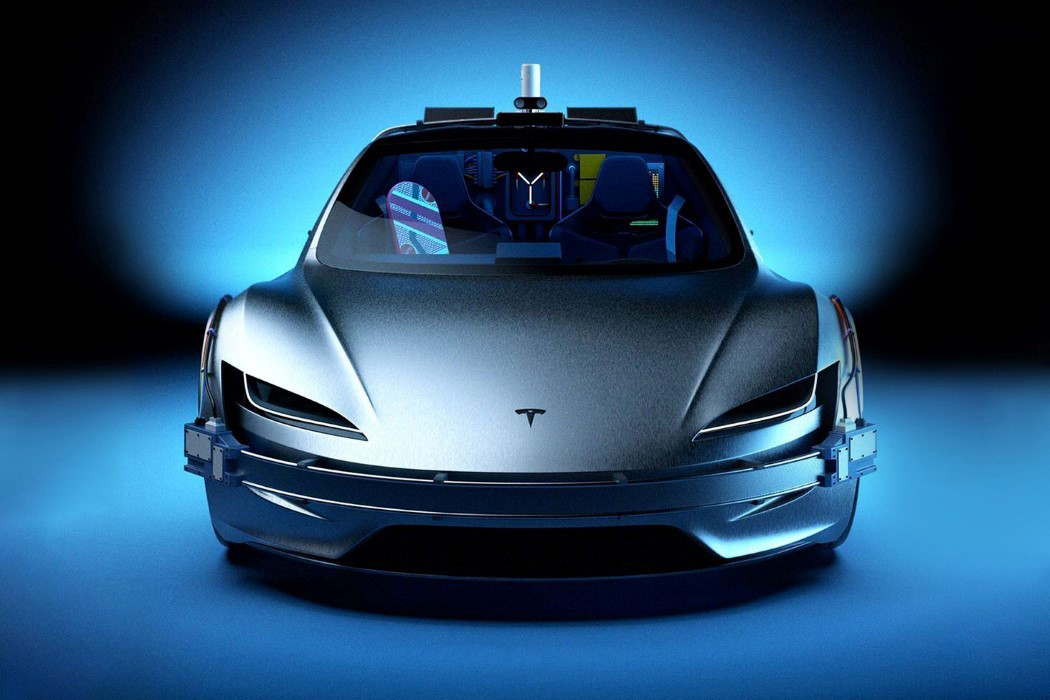 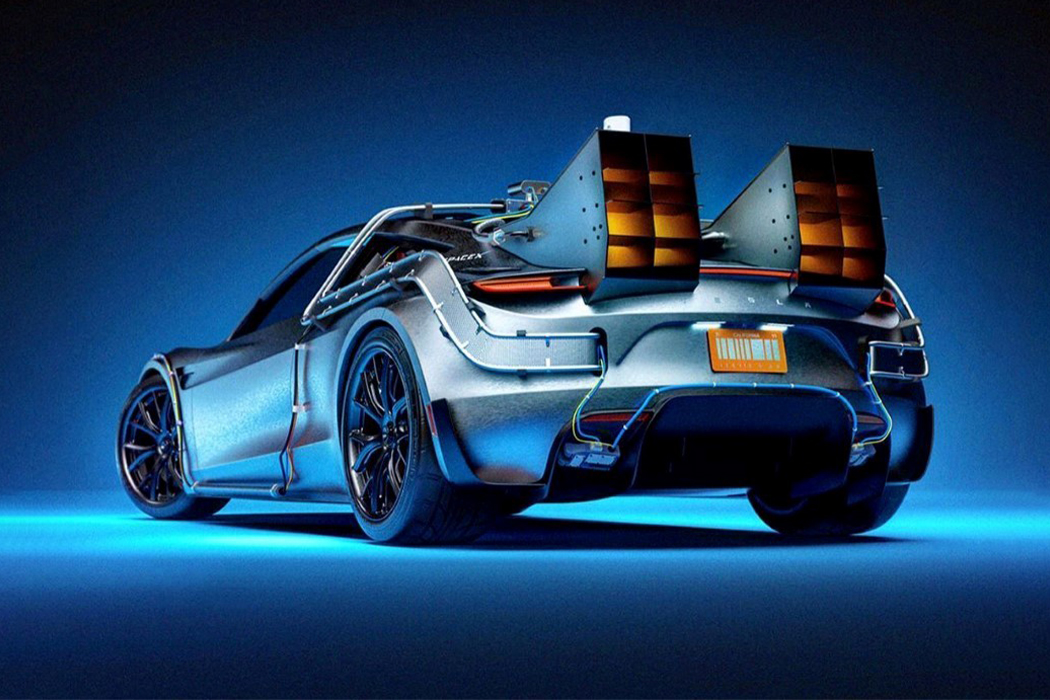 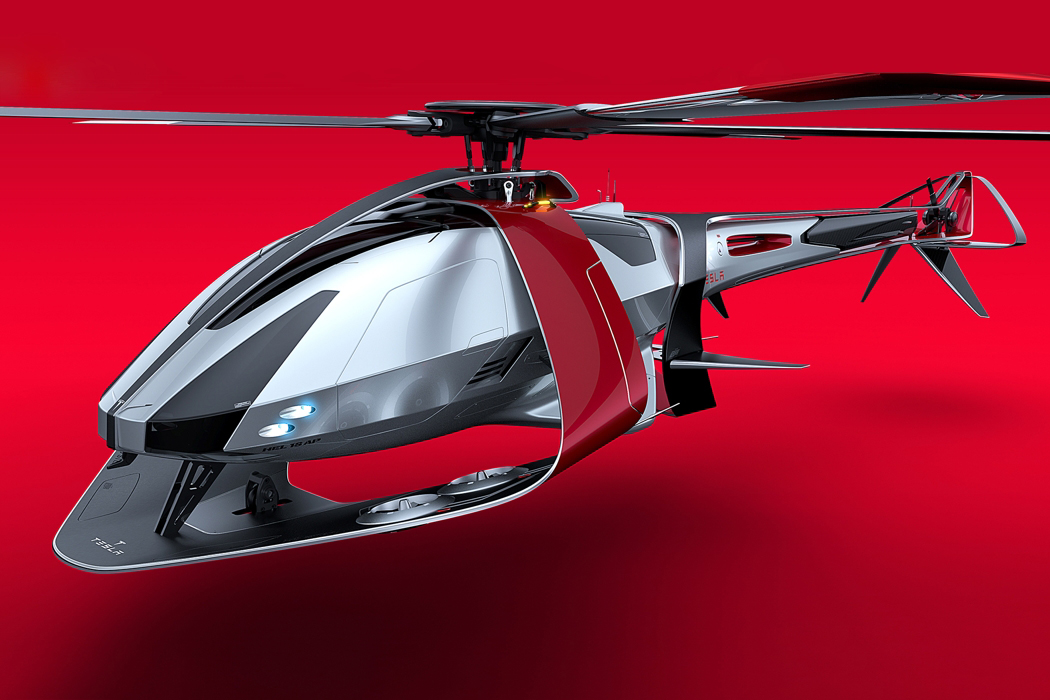 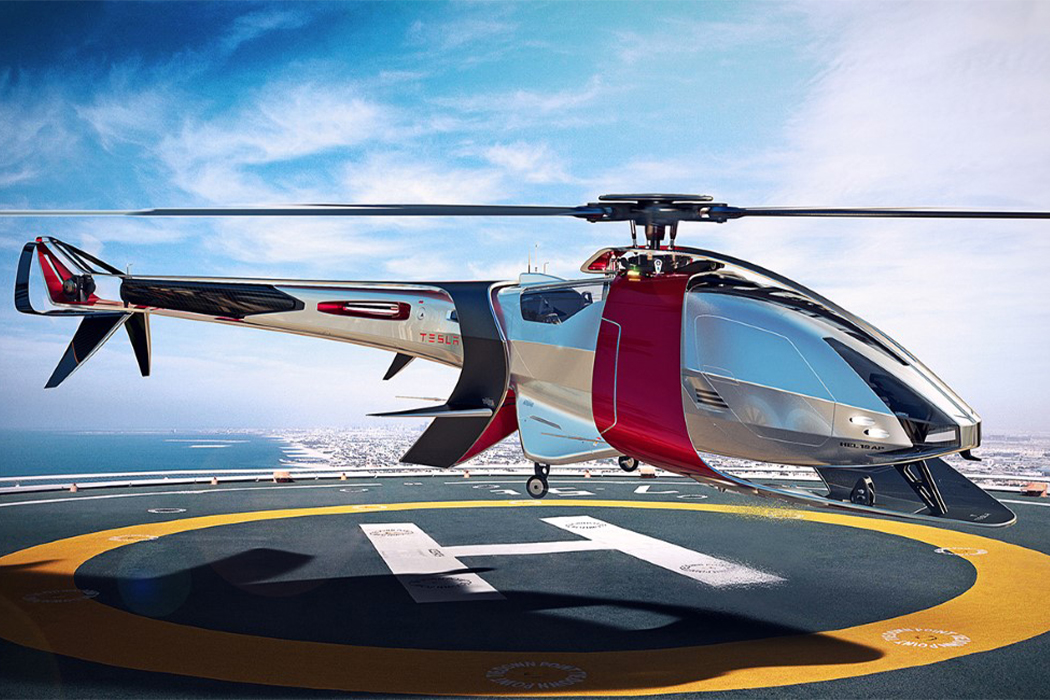 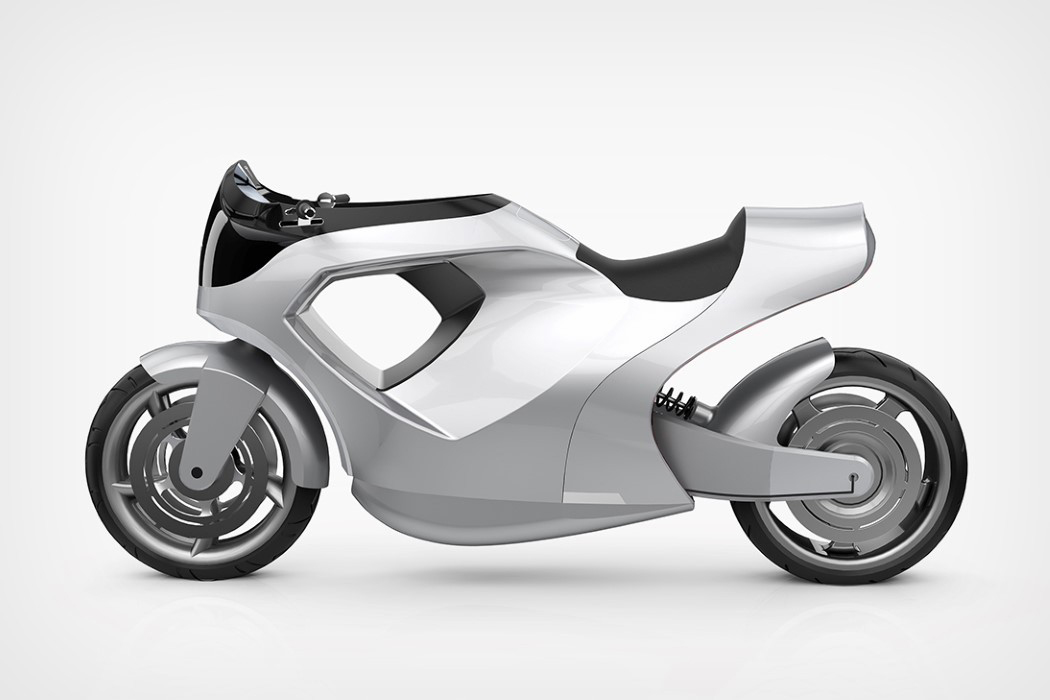 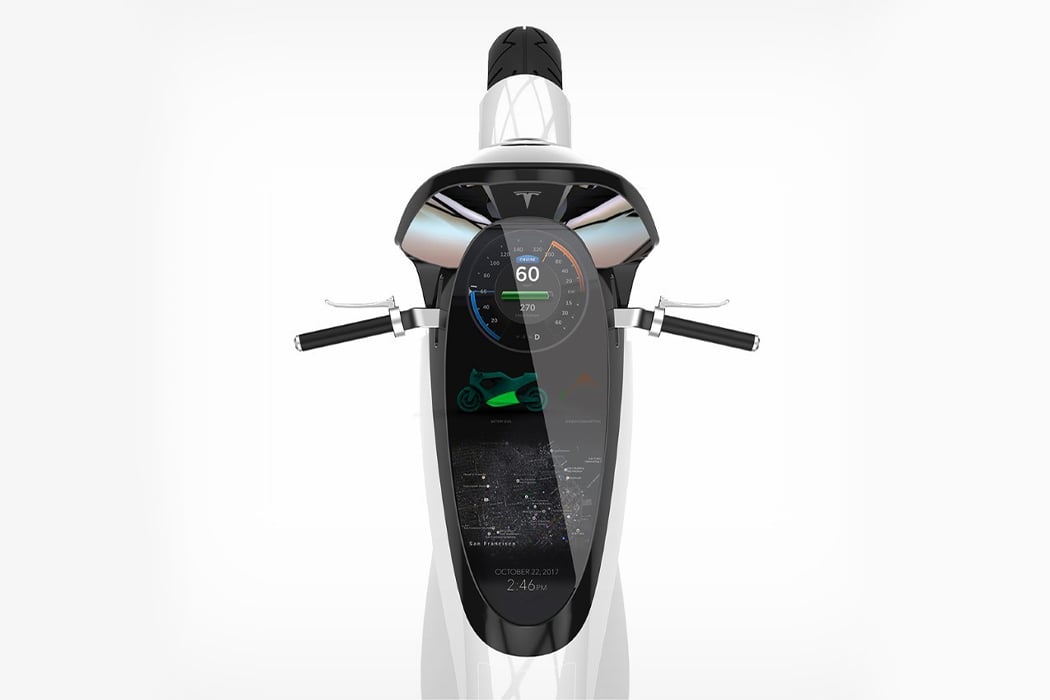 Meet the Tesla Model M by James Gawley… designed to make electric bikes more of the status quo, the Model M comes with a unique aesthetic that deliberately chooses to create a negative space in its design where the fuel-tank would be, almost poking fun at its fuel-guzzling ancestors. The bike’s curvy outer body harks to the curvilinear design-language of its sedans like the Model X and Model S, and a massive dashboard occupies a significant amount of space where you’d expect the fuel tank’s inlet – giving you a whole host of data from your speed and battery level to the bike’s performance and even a detailed map to help you navigate. 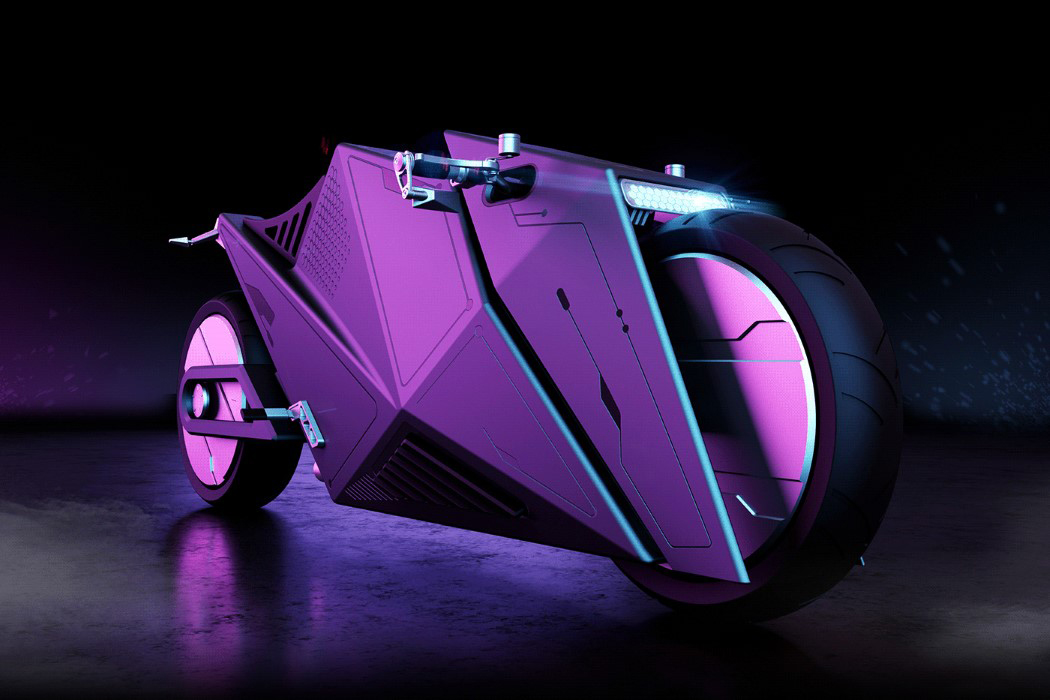 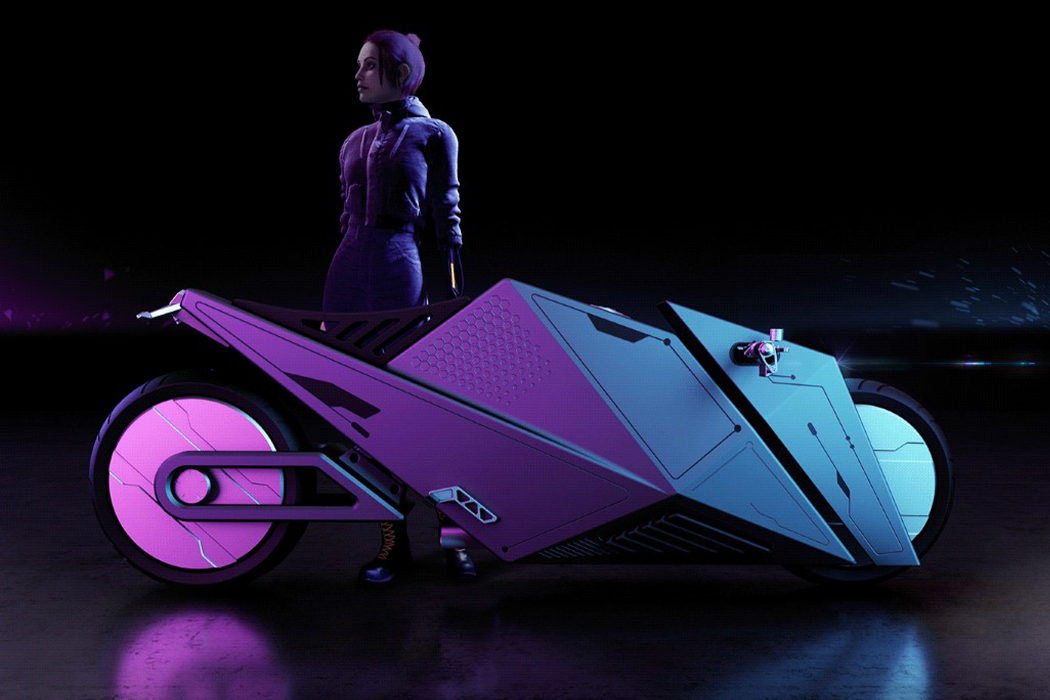 The Rimac 2080 Hyper Cyber is a concept by 3Dmente Digital. Designed as a part of Rimac’s Design Challenge on Instagram, the Hyper Cyber is an edgy, retro-techno-punkish bike with a low-poly body in the signature metallic finish. The bike sports an unusual seat design that’s molded in a single piece, with negative spaces that give it a cushioning effect, and quite like the Cybertruck, it’s missing rearview mirrors too. That being said, it does come with a traditional-looking fuel tank, although that could just be a power inlet for charging… and there’s a distinct lack of cracked glass surfaces too, a detail whose absence I surely can appreciate! 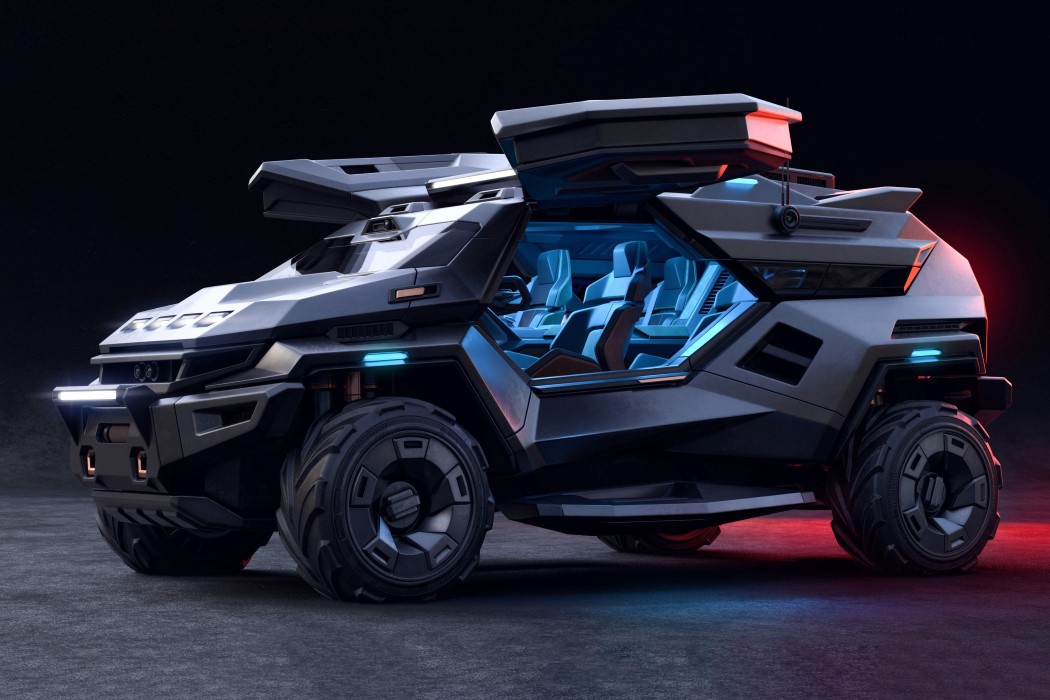 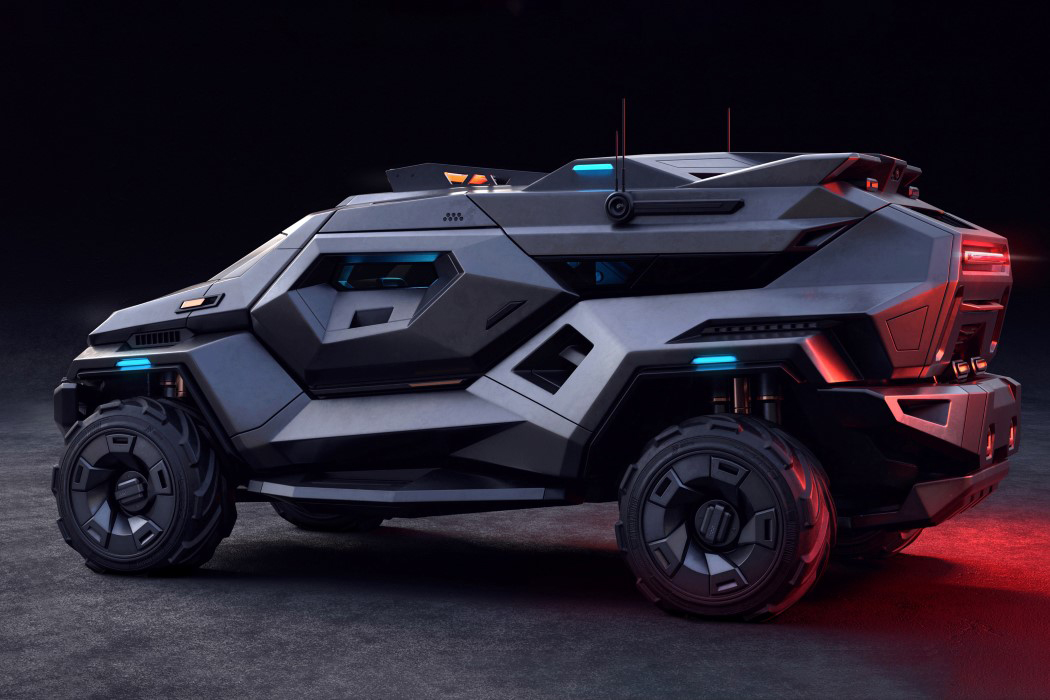 Designed really as more of a conceptual car rather than something that even dreams to be street-legal, the ARMORTRUCK by Milen Ivanov is a hulking 2000 horsepower beast that comes with an aggressive outer design featuring low-poly paneling that’s designed to make you shudder first and admire later. Given how incredibly broad the car is, gullwing doors open vertically allow you to enter and exit the vehicle, primarily because you’d possibly struggle for door-opening space in a parking lot. The car comes equipped with insane off-road tires and fog-lights, and sort of does a hat-tip to the Cybertruck with its linear tail-light. 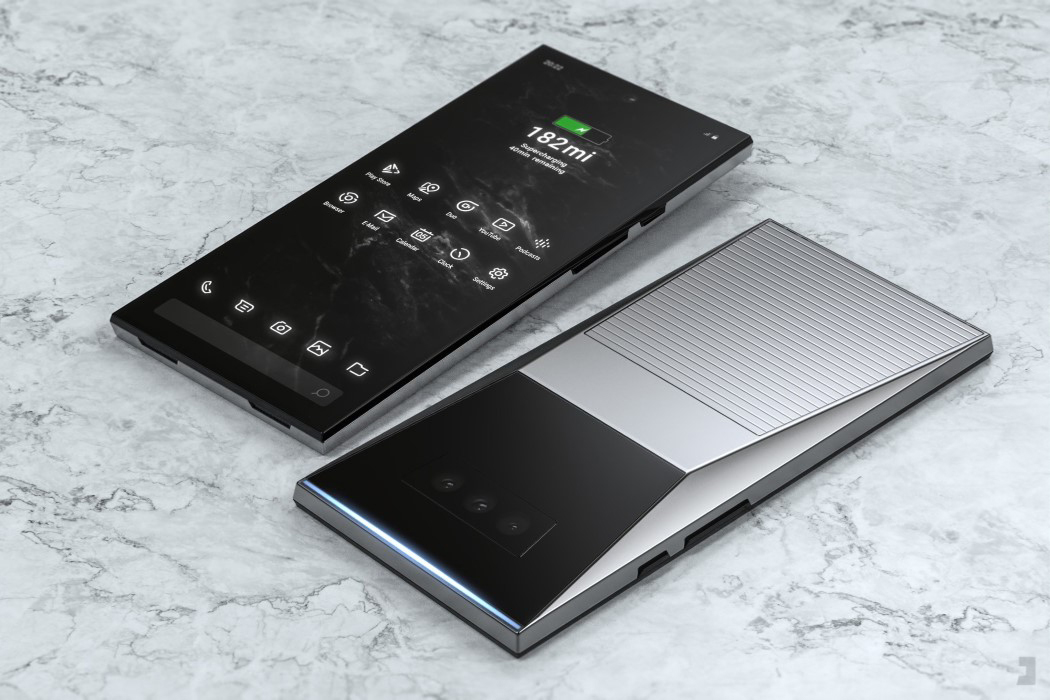 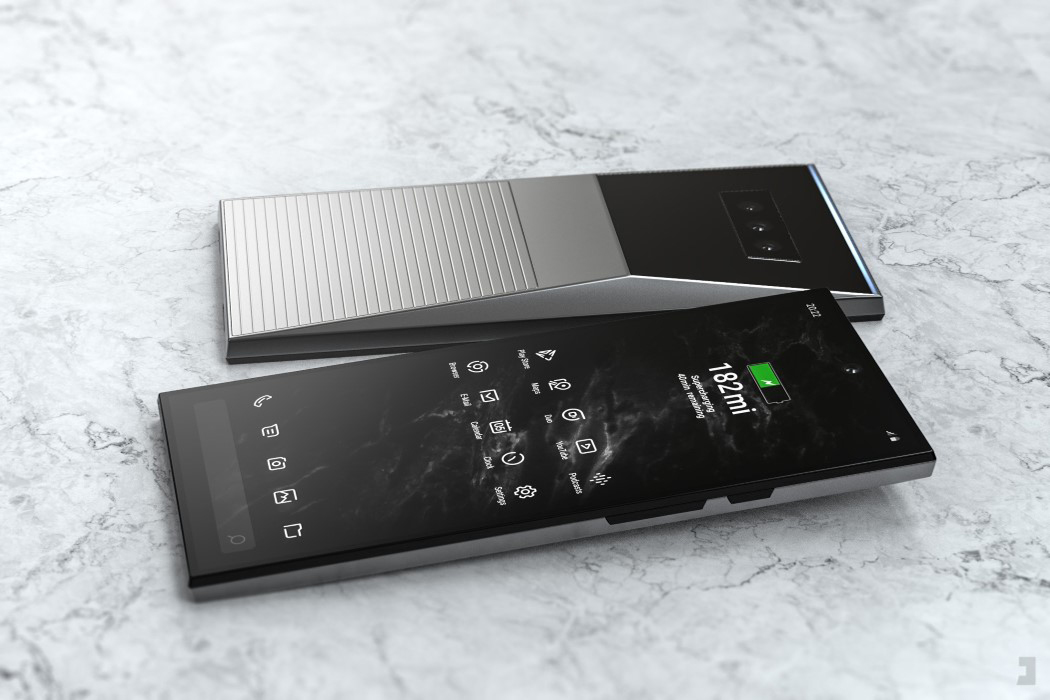 Meet the Cyberphone by Jonas Daehnert… an indestructible mobile with a 7-inch screen and nifty stainless steel finish. Flip the phone over and it begins really looking like its inspiration. The angled design with a windscreen-esque black glass on the upper half, and a slatted lower half resembling the truck’s vaulted bed. Under the ‘windshield’ lies a triple camera setup, but what really has my eye is the nifty strip-light on the top, modeled after the Cybertruck’s headlights, that I assume works either as a flash or a notification light. Plus, extra points to the designer for rendering out this beauty on a marble surface, paying a hat-tip to the Cybertruck’s marble interiors. 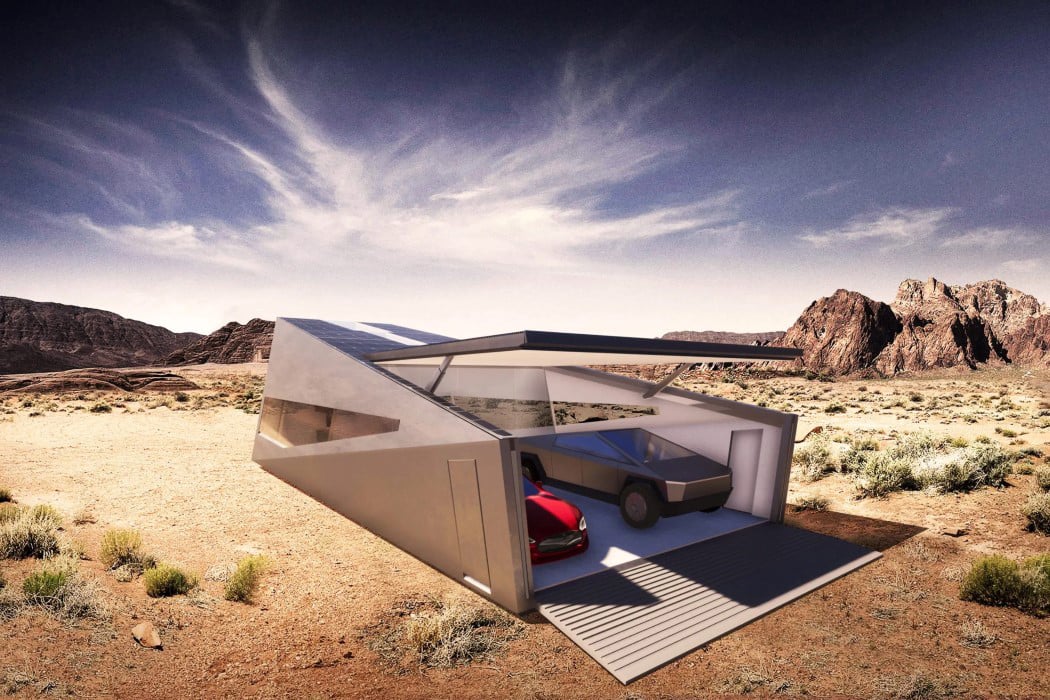 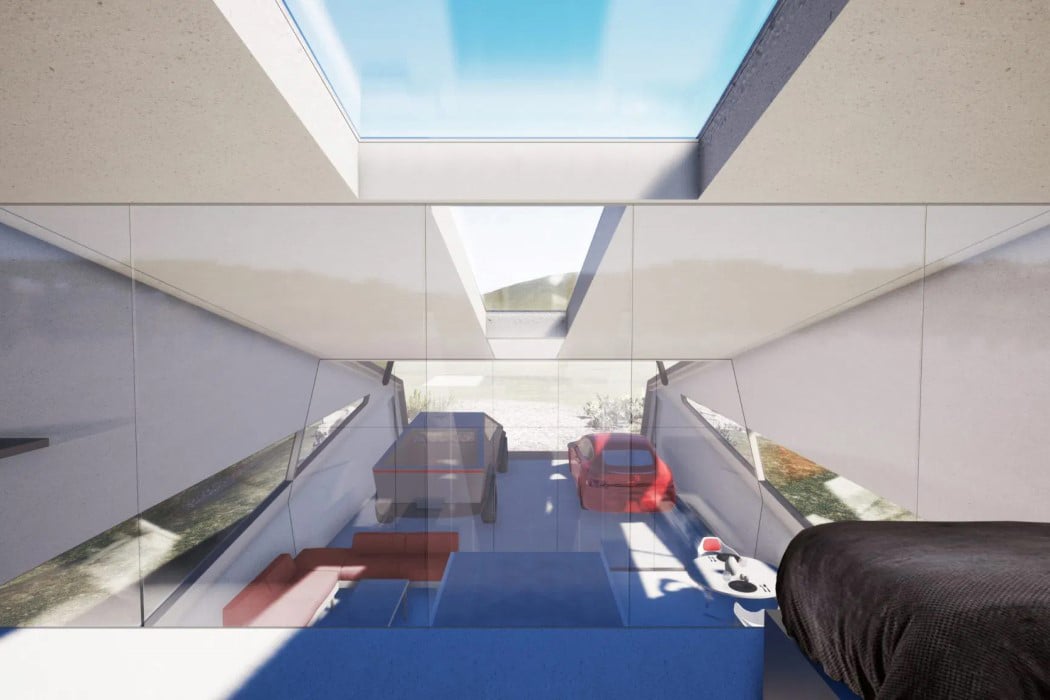 How many times have you found yourself dragging the cart in the supermarket from section to section with every corner wearing you down with unrest?…

The Porsche 911 GT3’s original exhaust pipes were used to build this speaker!

A speaker for all the Porsche aficionados is here! Porsche Design created a speaker that not only looks like the original exhaust pipes of the…

Not many people know this, but oil already used for cooking can be reused again. The Biofuel Cooking stove makes use (or rather reuse) of…