There’s probably a future where we don’t buy single-use plastic bottles anymore. It seems ambitious, but it still is possible if you decide to carry your own metal flask or glass bottle with you everywhere, you may just never need to buy a plastic bottle… but what about your toothbrush? A toothbrush isn’t a purchase that’s entirely avoidable, and the problem is that a majority of them are made out of plastic.

There’s a reason why plastic toothbrushes are so overwhelmingly more popular than natural bamboo brushes. They’re faster to manufacture, they look good, last long, and are exceptionally easy to clean/maintain. The guys behind the Reswirl toothbrush completely agree that plastic is a far superior material when it comes to manufacturing toothbrushes… they were just not convinced that manufacturers were using the ‘right kind’ of plastic.

Rather than opting for fossil-fuel-based plastic, the Reswirl comes manufactured from a cassava-based biopolymer called PHA that naturally biodegrades in land or water… a feature that’s handy when you eventually throw the brush away, but what makes the Reswirl special is that its designers don’t want you to throw it away. The toothbrush comes as a part of the Reswirl subscription program that allows the company to ship a new brush to you when you’re done with the old one. Each brush comes in biodegradable packaging that’s pre-paid for return, so all you need to do is put the used brush back in its old box and drop it into the nearest mailbox and it goes back to the factory. At the factory, the Reswirl brush can be cleaned, pulverized and recycled into a new one, effectively turning waste back into raw material. If the waste doesn’t reach the factory, you can rest assured knowing that it’s biodegrading wherever it is, and isn’t contributing to the vast amounts of plastic waste in our earth and oceans.

The Reswirl’s plastic design immediately feels familiar to the touch, but without the guilt associated with non-biodegradable plastics. It comes with a textured cylindrical body that’s ergonomic, robust, and easy to use, but at the same time hollow, so as to minimize the amount of material used and maximize the toothbrush’s ability to decompose. Pretty clever, if you ask me. The bristles on the brush are bio-based too, made from a special nylon derived from castor bean oil – which does biodegrade, but at a slower pace as compared to the handle, which is why the company believes that it’s much better to have a cradle-to-cradle approach rather than to rely on nature dealing with our waste. I could definitely rally behind that sort of thinking. Plus, the company makes it incredibly effortless to recycle your brushes too. Instead of throwing the old one into the trash and heading to the supermarket to buy a new one, Reswirl sends you a new toothbrush every three months, and the only thing you need to do is to pop your old toothbrush into the nearest mailbox and let Reswirl take care of the rest… and in the event that you forget and accidentally throw your brush in the trash, nature will come to the rescue! 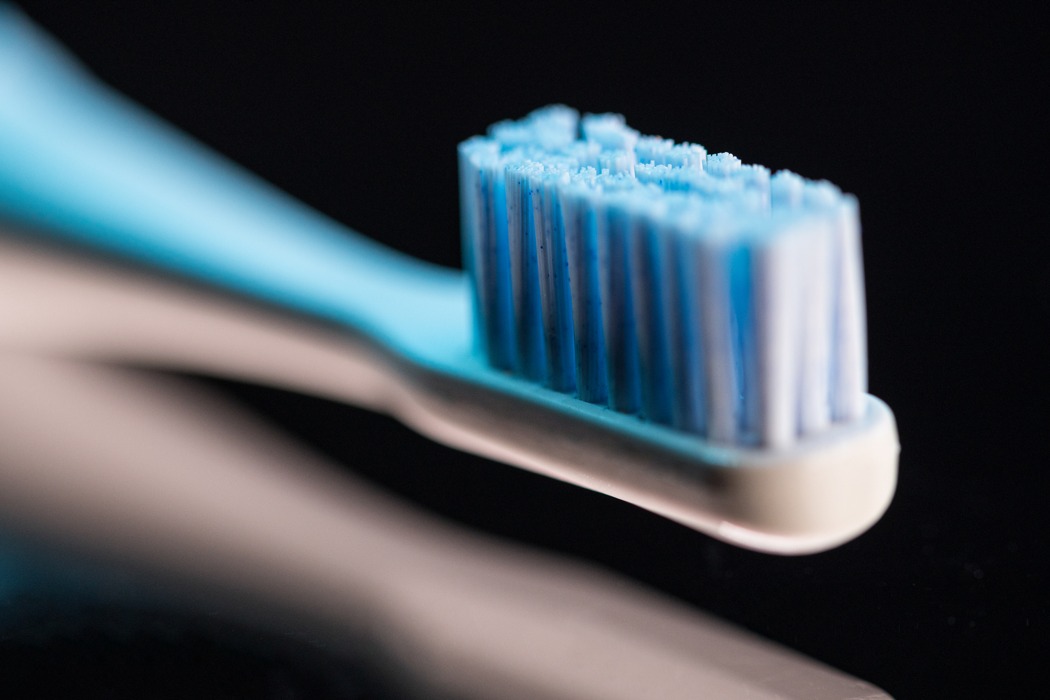 Reswirl is the world’s only returnable, sustainable and remouldable plastic toothbrush. A new option for the eco-conscious. This infinite toothbrush has a body that is made from an alternative plastic that is fully biodegradable. 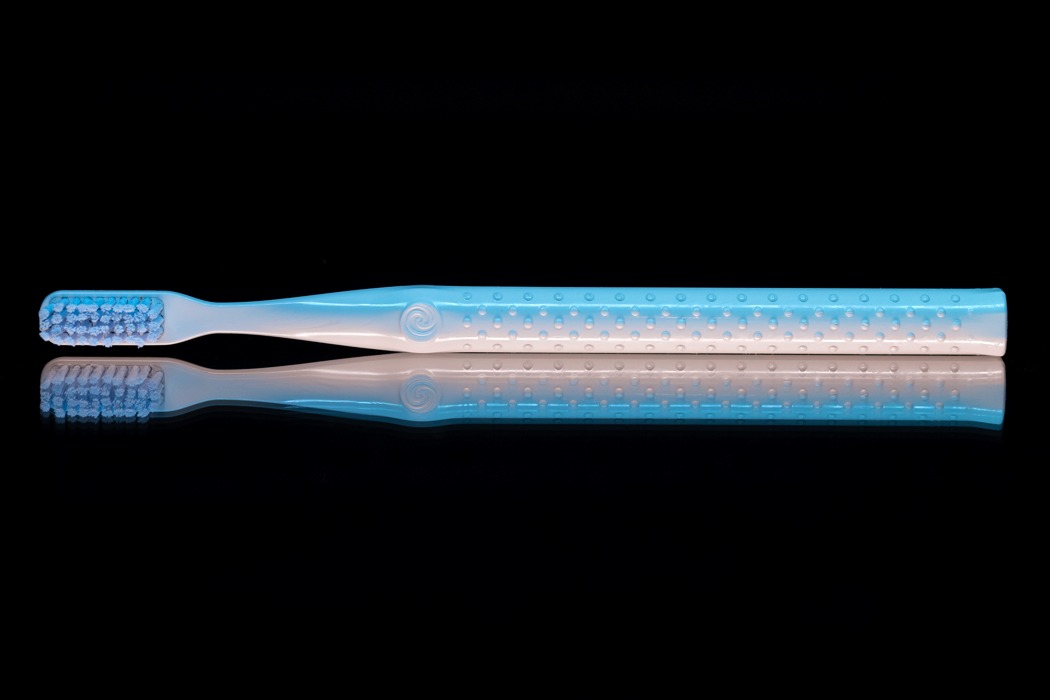 It looks, feels and functions like any other toothbrush but, unlike other plastic toothbrushes, it won’t stay around as a problem for future generations. Better still, the makers want every used toothbrush back so they can remold them into new brushes. 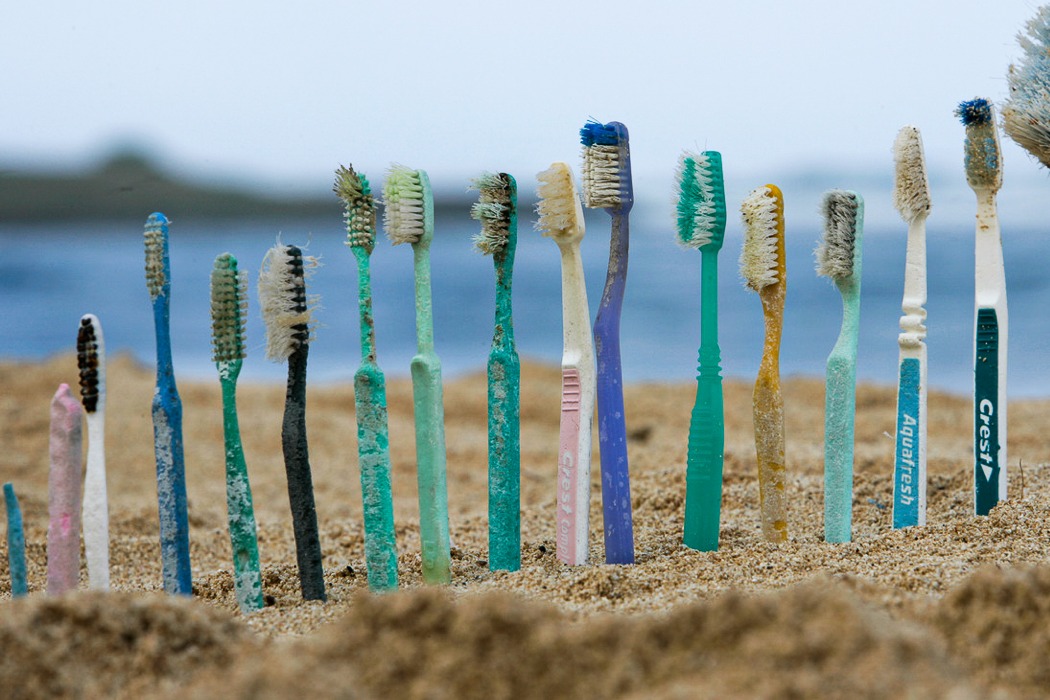 Humans have discarded more than 6.3 billion tonnes of plastic since we started to use it and one way or another we are still living with nearly all of it. Over half of all the plastic made since 1950 was made in just the last 14 years. And did you know that around 3.5 billion toothbrushes are sold worldwide every year. 99% of them are fossil-fuel based plastic. 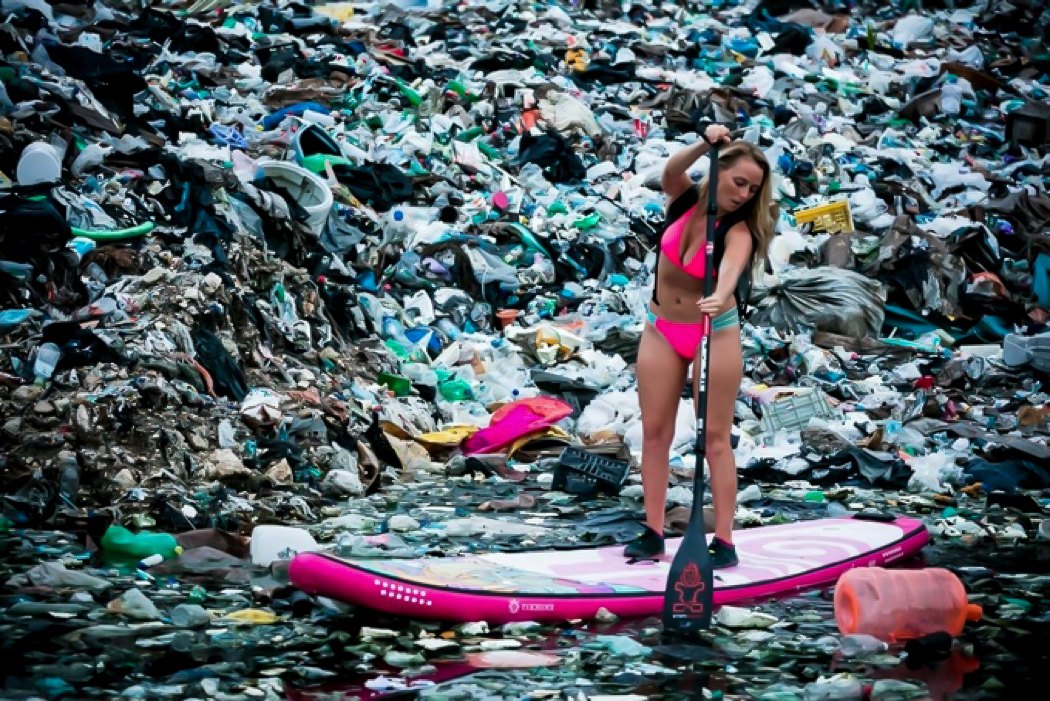 Recently on the beaches of the tiny Cocos(Kneeling) Islands, pop.600, marine scientists found 373,000 toothbrushes washed up among other plastic debris. 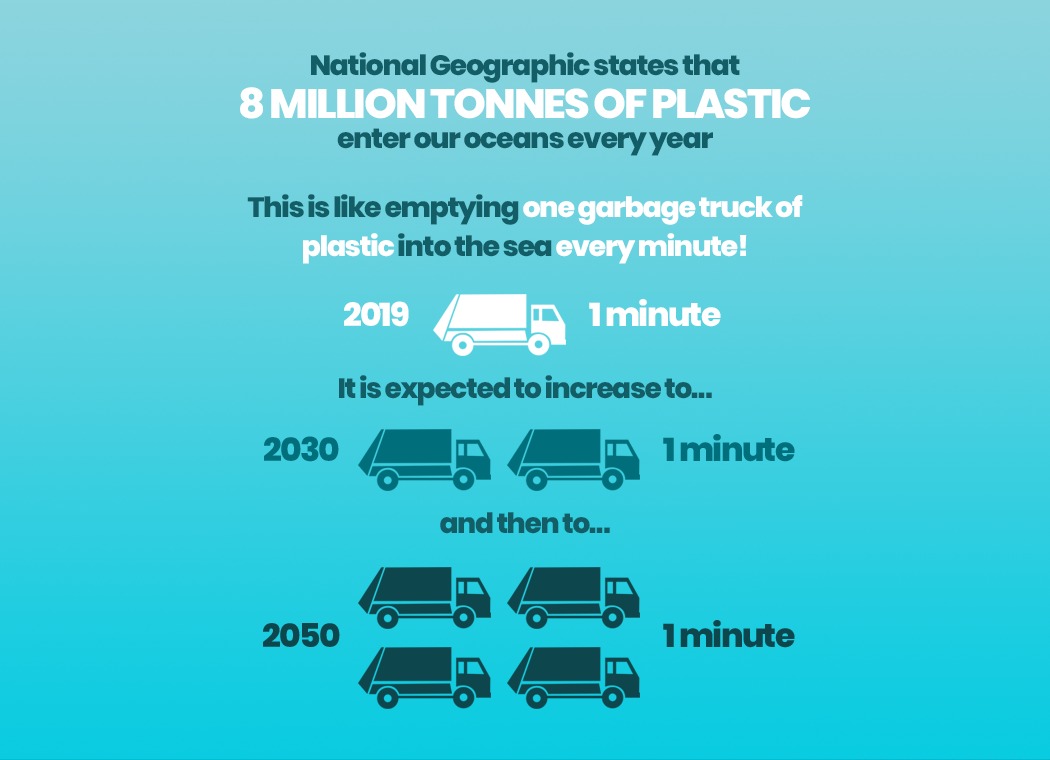 Reswirl is Made from Bio-plastic

Reswirl toothbrush handles are made from a special blend of bio-based plastics which are also biodegradable even at low temperatures like home compost or the sea. One of the main ingredients is polymerized directly from plant feedstocks, while the other is derived through a microbial fermentation of crops like corn or cassava (all non-GMO). The ingredients (all certified as safe for food contact too) are blended carefully and prepared as pellets for injection moulding.

At the end of its life, the plastic blend returns to nature as carbon dioxide, water and biomass. The team have sourced ingredients that have been certified compostable as packaging films. They will compost as a toothbrush moulding too, given a bit more time. Their biodegradability is a safety feature. The team would much rather you sent them back to their facility for recycling. 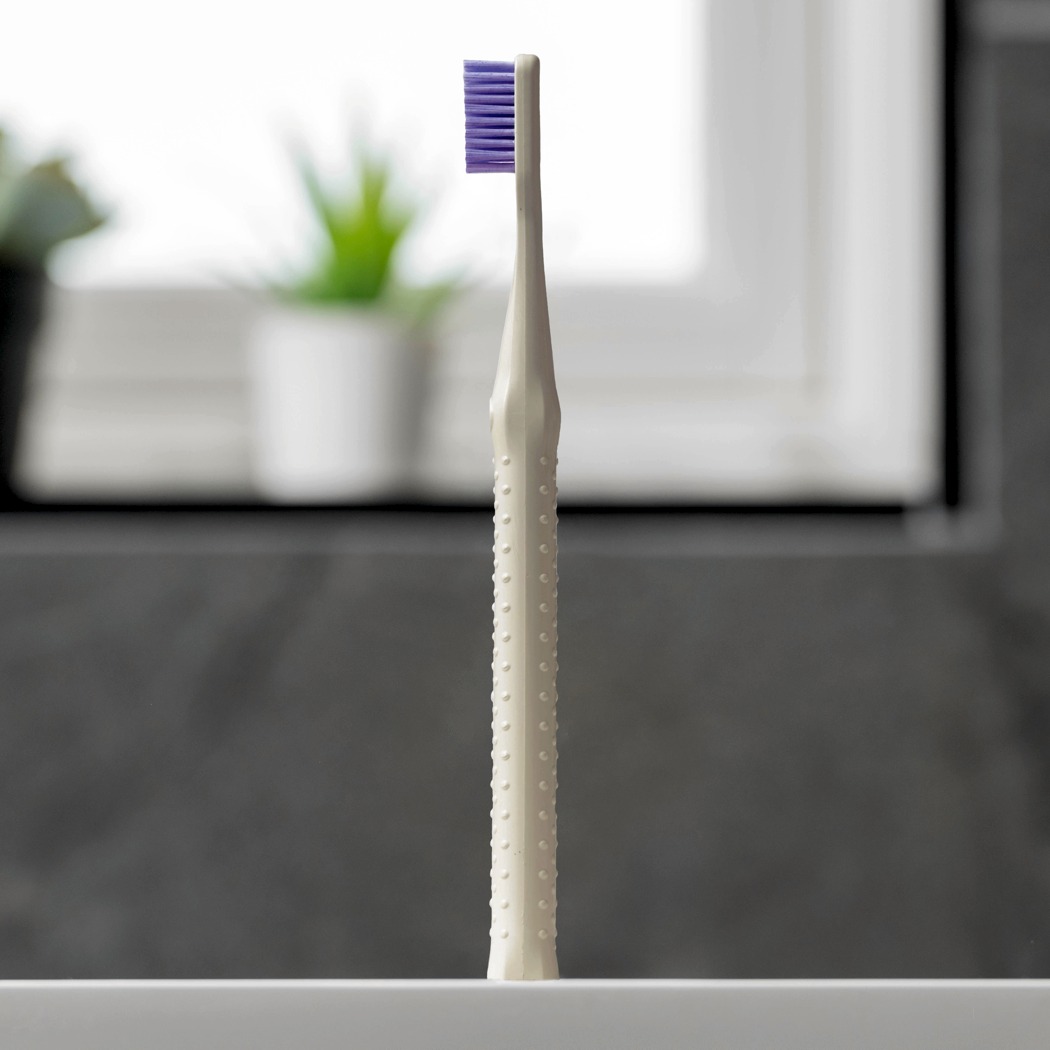 The bristles in a Reswirl brush will also be up to 100% bio-based. They are a special nylon derived from castor bean oil and can be recycled – another good reason for sending your used brushes back to them. 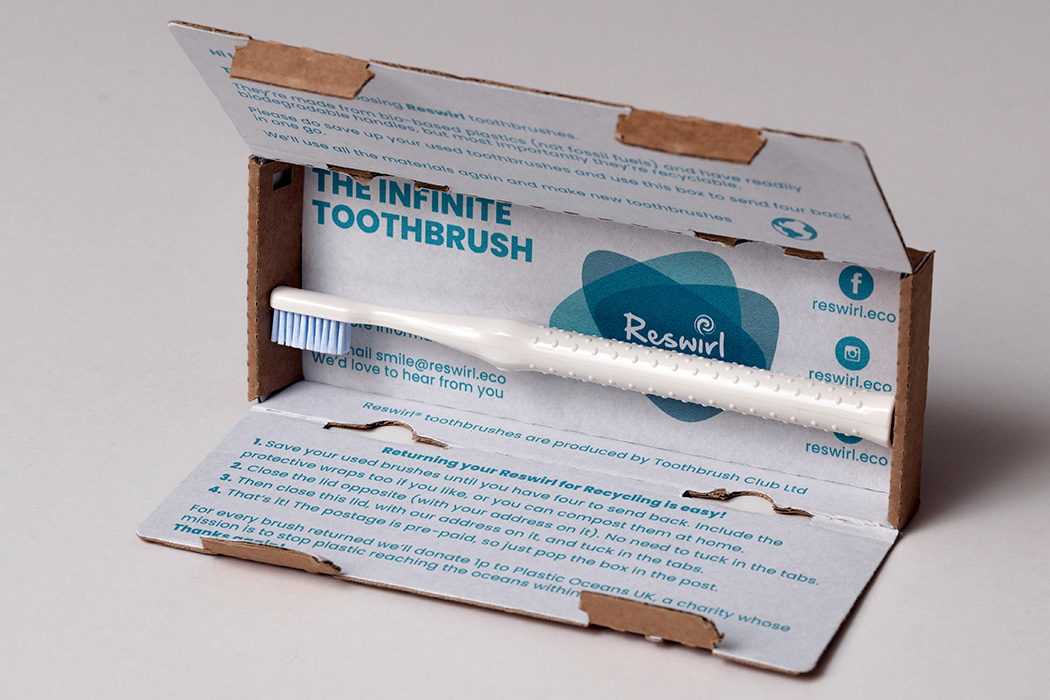 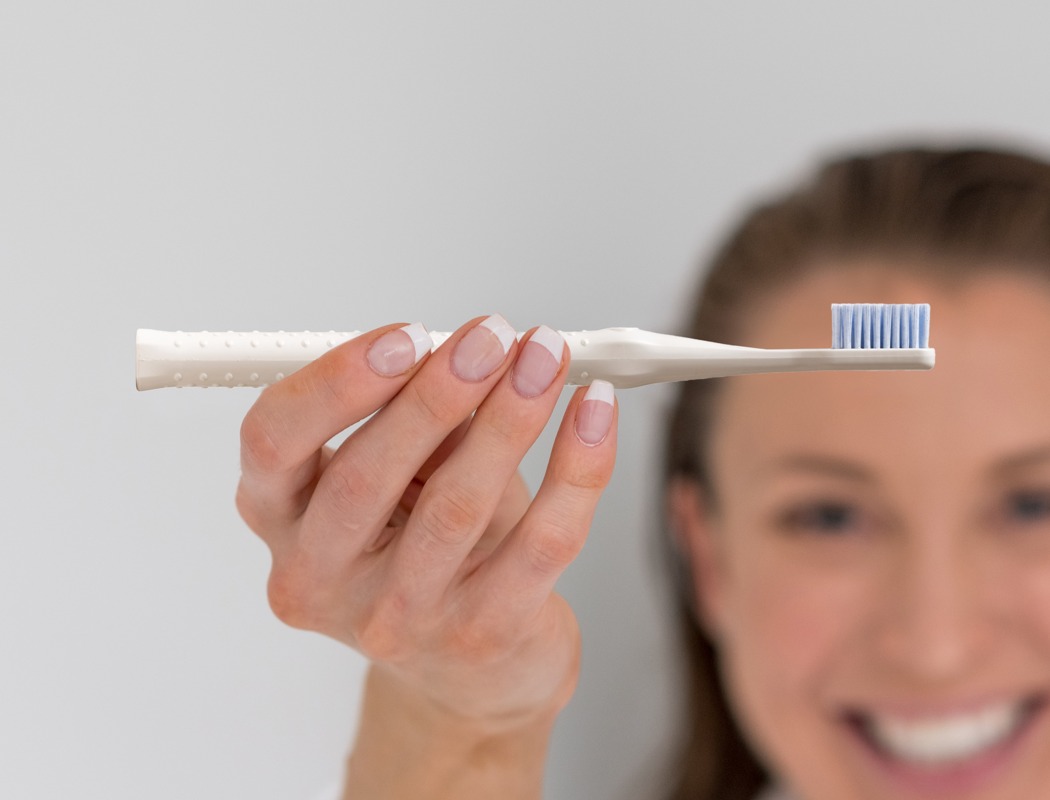 Cylindrical body for maximum comfort, ease of use and fingertip precision when brushing those hard to reach areas. 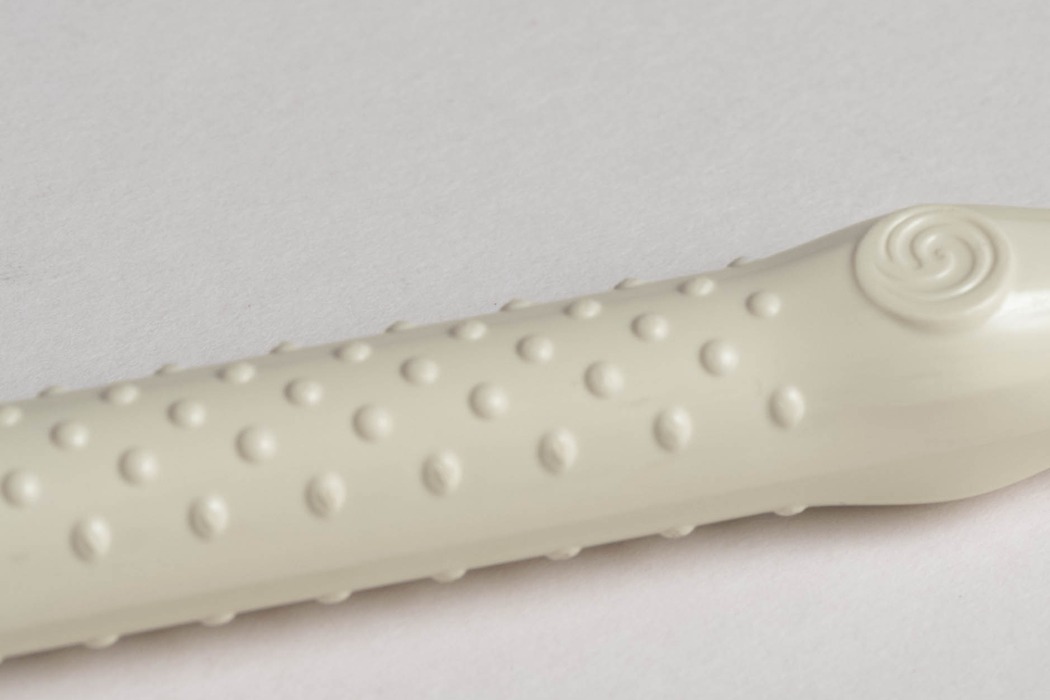 Grip –  where other toothbrush makers mix hard and soft plastics in their handles making recycling impractical, the team have moulded in a patterned surface for a good grip. 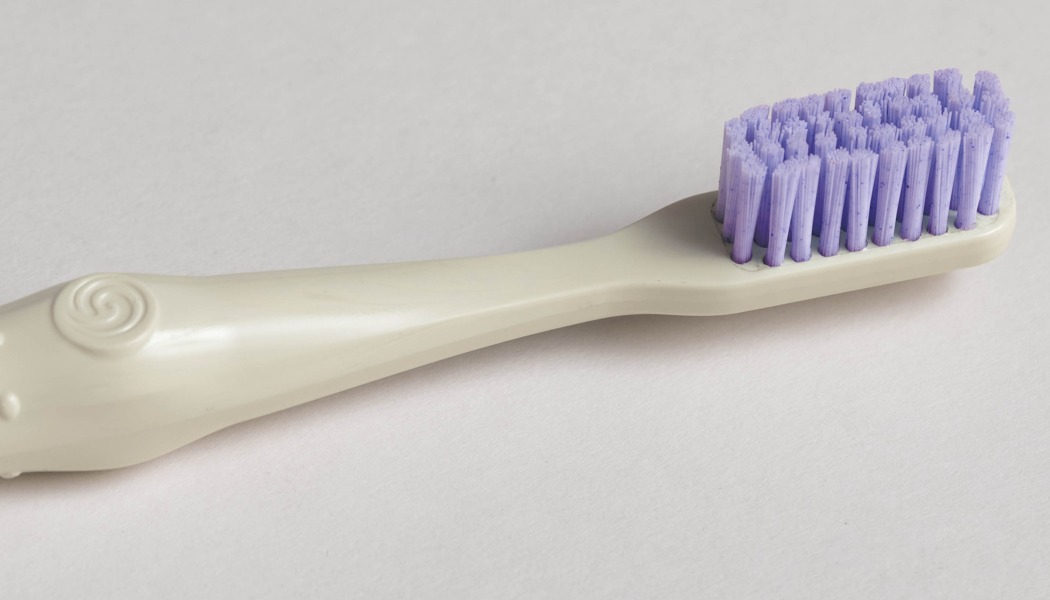 Comfort – after extensive testing the team has settled on a head size that they think you’ll find just right. Not too big to make access difficult, and not too small to be ineffective. 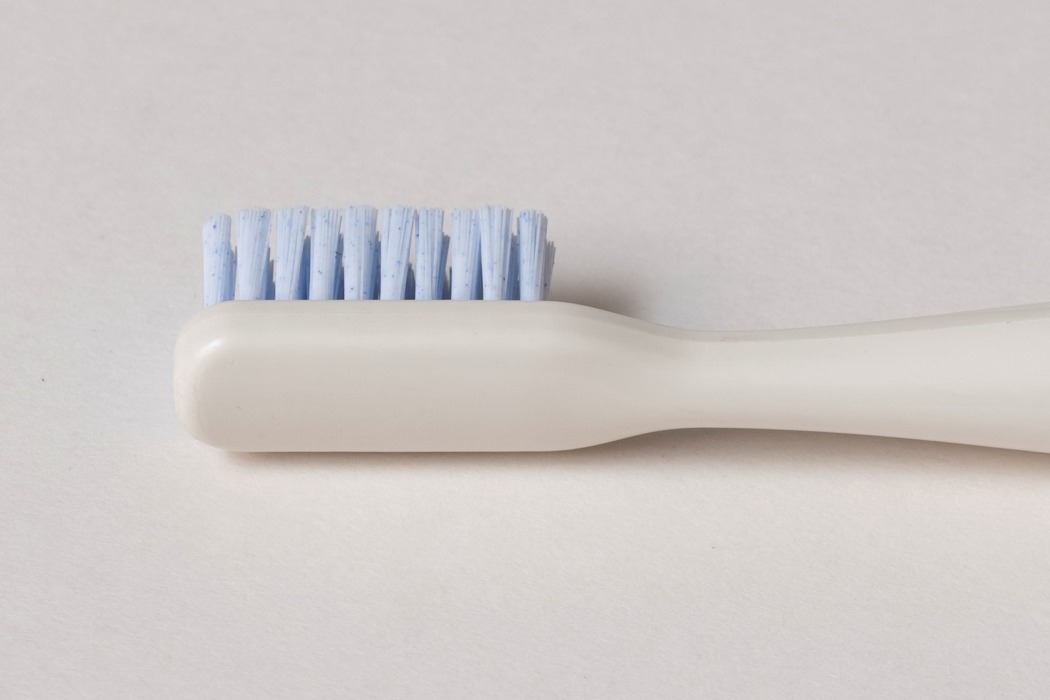 Gentle – the tip of the head is gently rounded to make it easy on your mouth and gums. 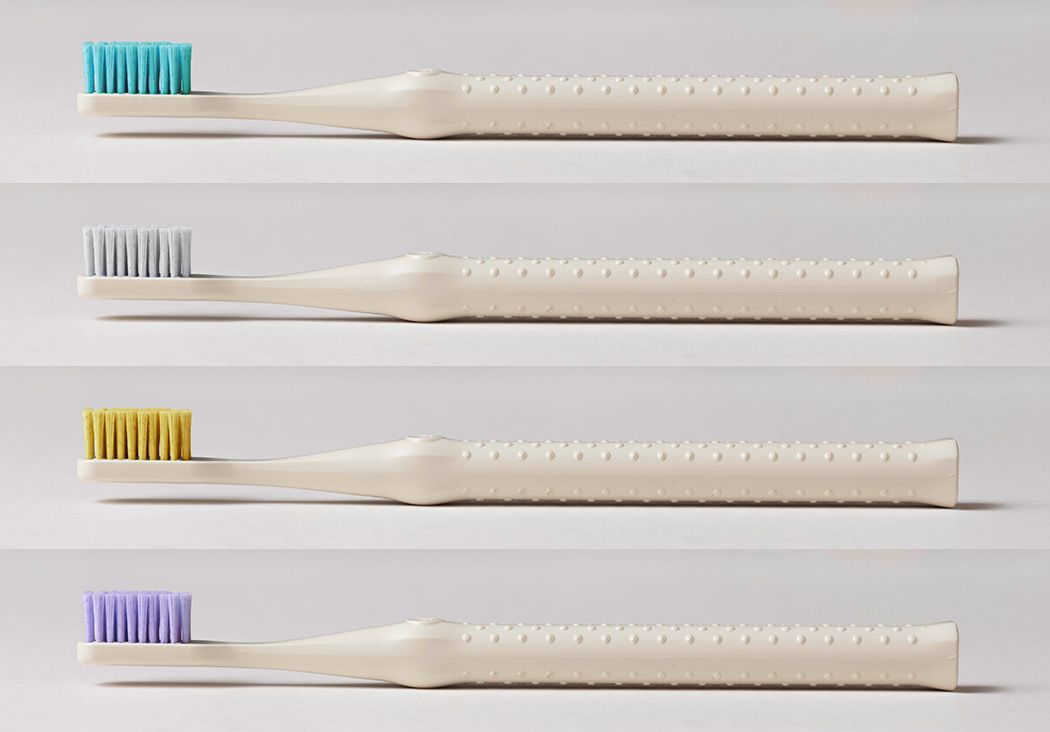 Bristles –  a choice of four fresh colors (Aqua, Gold, Purple and Natural), in medium stiffness to match your style or keep track of which brush belongs to whom. The tips of the high quality, bio-based bristles are rounded and polished to be kind to your gums. 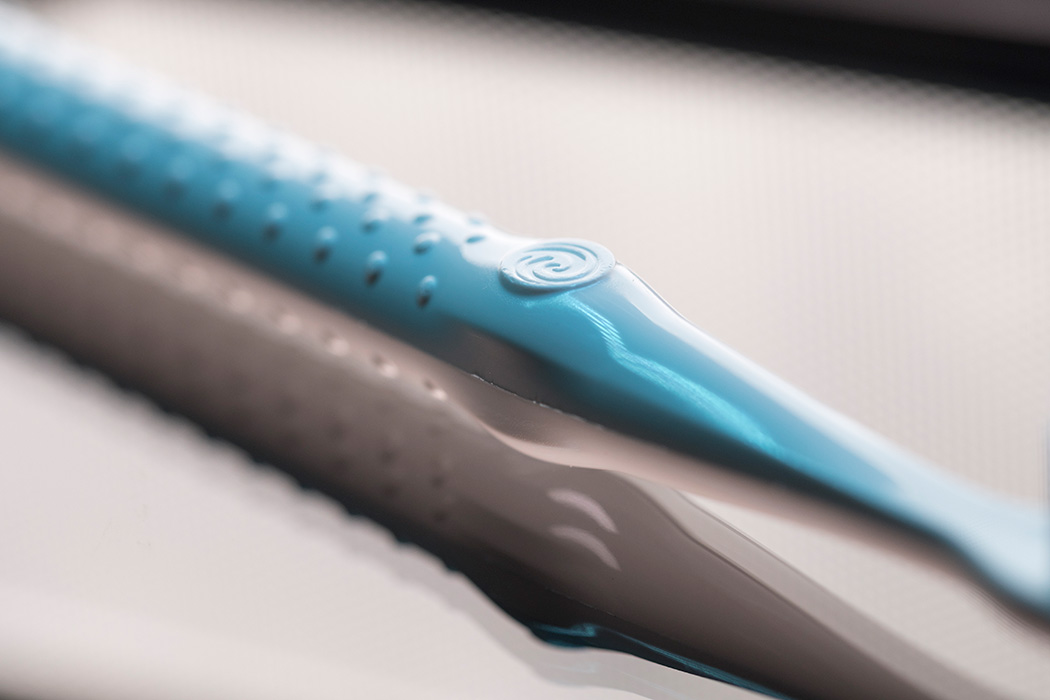 Handle – the hollow design reduces material use and speeds up biodegradation. If ever a brush ends up where it shouldn’t, then the soil or water microbial breakdown can begin from both outside and in, returning the material to natural elements all the sooner.

No Compromise – even with the use of bio-based, biodegradable plastic you don’t need to worry about the capabilities of your toothbrush. Before shipping, the team we will ensure Reswirl toothbrushes satisfy the EN/ISO standards for toothbrushes including tuft retention, handle impact strength and fatigue resistance through 75,000 cycles.

Step 1 – Reswirl toothbrushes are made entirely from bio-based plastic, even the bristles. 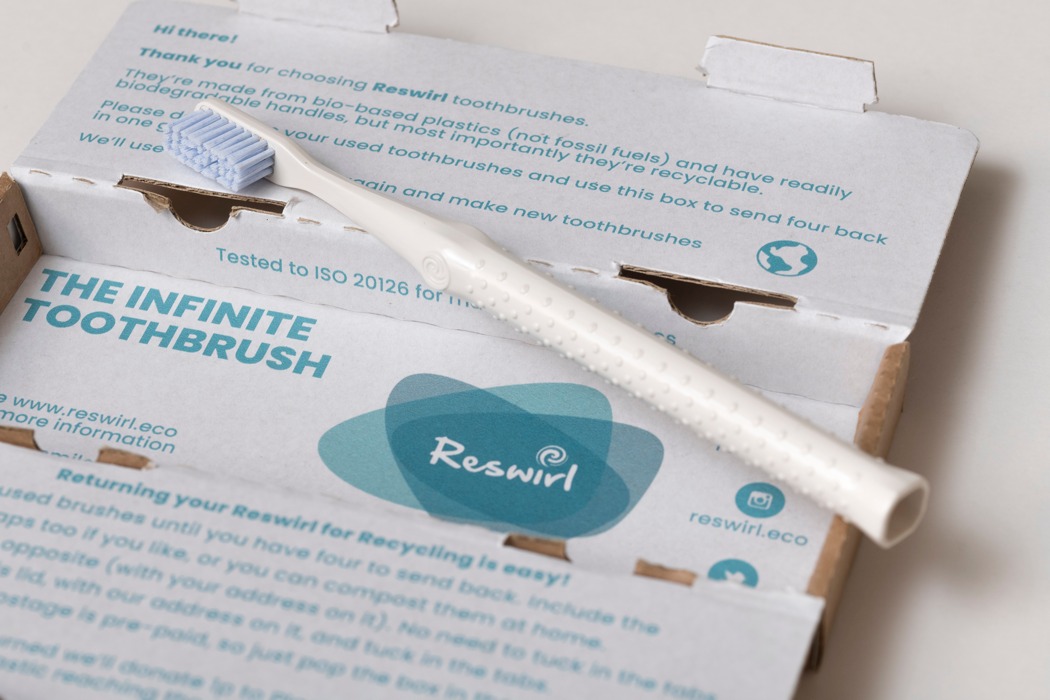 Step 2 – The team sends you a new toothbrush every three months. Your toothbrushes are sent to you in a box made entirely from recycled and recyclable cardboard.​ 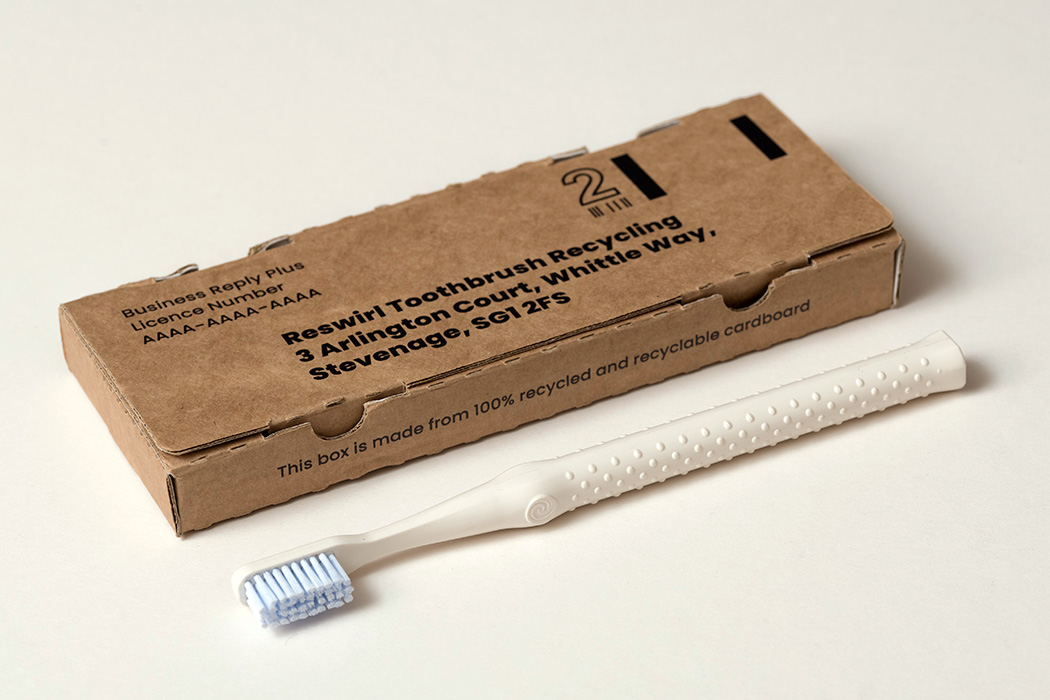 Step 4 – Send the old brush back to us in the same prepaid box that the new toothbrush arrived in. ​

Step 5 – Returned brushes will have their bristles removed for separate recycling before the handles are ground down for moulding into new ones. The team will compost any material they don’t need, returning it to natural elements rather than cluttering up landfills or polluting oceans.

That’s Not Jack In The Box

I have some water and I have some bulbs, hmm…what can I make from this? Oh I know, but then I’ll need some spring and…

A wireless charging and smart light that carries a humble aesthetic

If you are like me, then you’ll love the idea of seemingly inconspicuous devices holding smart capabilities. This type of seamless design allows devices to…

A Smartwatch for Warriors

For most of history, the traditional timepiece was purely defined by its aesthetics. For today’s smartwatches, it’s all about the guts! Suunto’s collection of Spartan…