If you’ve heard of Mandalas, let me introduce you to SANDSARA…! This tabletop kinetic sculpture works with sand as its raw material, using a single ball-bearing to make continuous hypnotic mandala patterns to enchant its viewers.

Meet the SANDSARA, a clever portmanteau of the words sand – the material, and Samsara – the Sanskrit word for the world and its infinite cycle of life-and-death… The SANDSARA, in its poetic spirit, is a tabletop kinetic sculpture that charts the infinite journey of a metal ball as it makes its way across the SANDSARA’s sand-filled surface. While the ball performs its repetitive choreography, it creates 3D patterns by digging into the sand, turning its movement into art. You can either stop to commend the metal ball as it slowly but surely completes its journey, or look at the bigger picture and admire its grand artwork, which it periodically erases to create new works of art.

This horizontal self-drawing kaleidoscope comes with a bed of fine, white sand, which acts as a canvas for a metal ball-bearing, operated by a magnet underneath the surface. The entire dynamic installation is encased in a black walnut and birchwood outer case, which comes in a classic circular frame, as well as an unusual star-shaped frame. As beautiful as its upper surface is, SANDSARA is equally complex under the hood, with a motorized two-arm linkage and magnet that does a remarkable job of guiding the ball above.

This unique system allows the SANDSARA to be made in any shape possible without compromising on its functionality. The kinetic sculpture comes with an iOS and Android app that lets you program it, accessing an ever-increasing library of hypnotic patterns and sequences. You can feed your own polar or SVG patterns into it too, allowing you to customize it to make images, logos, text, or patterns of your own making. Measuring not more than the size of a 15-inch laptop, and weighing 5.5lbs, the SANDSARA makes for a great addition to domestic spaces as well as retail ones, for its artistic, meditative quality. Its abstract symbolism and spiritual appeal literally makes it a great ‘meaningful’ gift too!

There’s an undeniable meditative quality about the SANDSARA and how it slowly and patiently completes a pattern, only to erase it and move onto the next. I’ll admit us humans can surely learn a lesson from this persevering ball-bearing that creates something beautiful without attachment. It’s almost Buddhist in its own way, as it meditatively goes about its path, creating Mandalas while never looking behind and only living in the moment! That spirituality sometimes unintentionally spills into the viewer. Whether you’re looking at the video of the SANDSARA in action, or admiring it in real life, it’s the kind of thing you can keep watching and never get tired of. It’s awe-inspiring, stress-relieving, and simply humbling as you stare at the single ball-bearing unquestioningly creating beautiful pieces of art in sand that come and go just like waves on a tranquil beach! 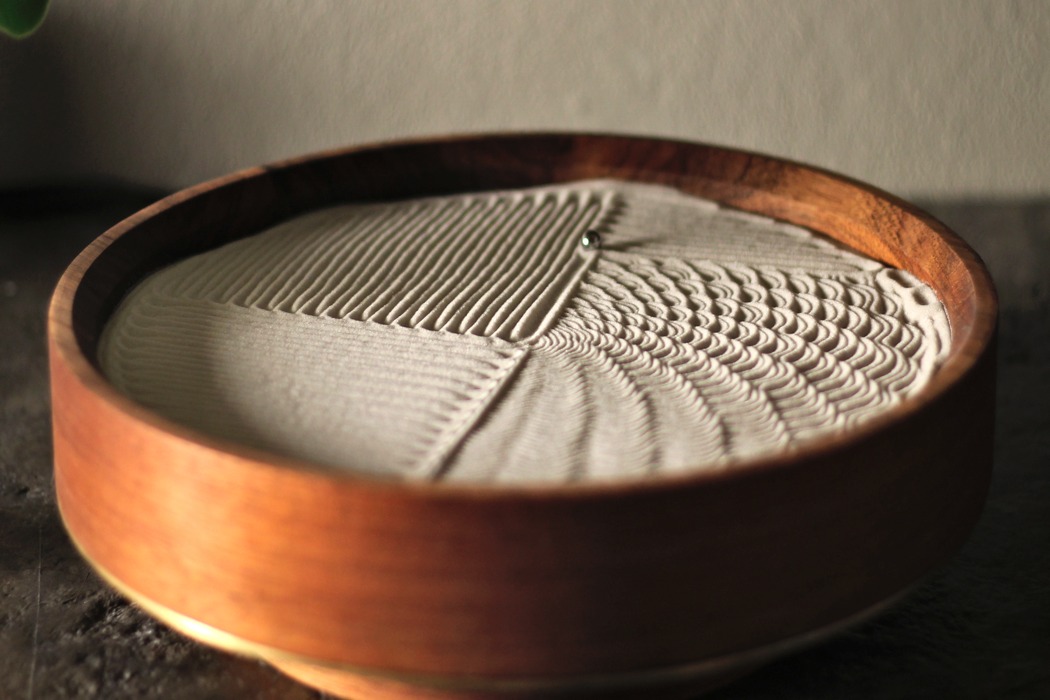 SANDSARA – The Kinetic Sculpture that Draws Infinite Patterns on Sand

The SANDSARA is a no-compromise, affordable art piece that would allow anyone to enjoy a mesmerizing kinetic sand sculpture at home.

Sometimes, it feels like every single second of our lives is filled up with something to do. For millennia, Eastern philosophies have known of the benefits and importance of the simple act of doing nothing, even if it’s just for a few minutes at a time.

There is something about SANDSARA that connects to a very primal and deep part of our brains. Maybe it’s the perpetually changing patterns drawn in a bed of very fine sand, maybe it’s the surprising motion of the sphere that appears to move by magic, or maybe is knowing that every time you look at it, the pattern will be unique and soon will be gone forever.

The name SANDSARA is a reference to Samsara, a concept essential to many Eastern religions like Hinduism and Buddhism. It is meant to represent the infinite cycle in which everything is born, lives, dies, and is reborn. 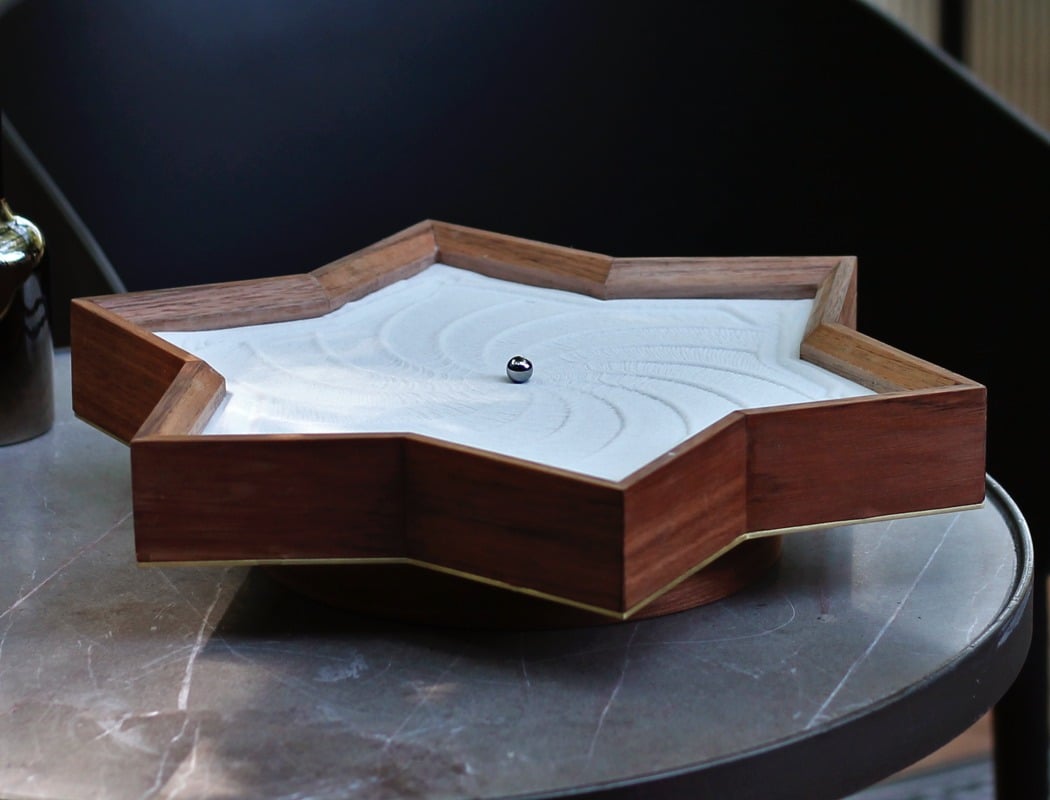 It implies all of our actions are connected with the universe. All the things that have happened before have brought us to the place we are standing right now. And every action we do today will affect everything else in the future. Everything is chained in a never-ending cycle. 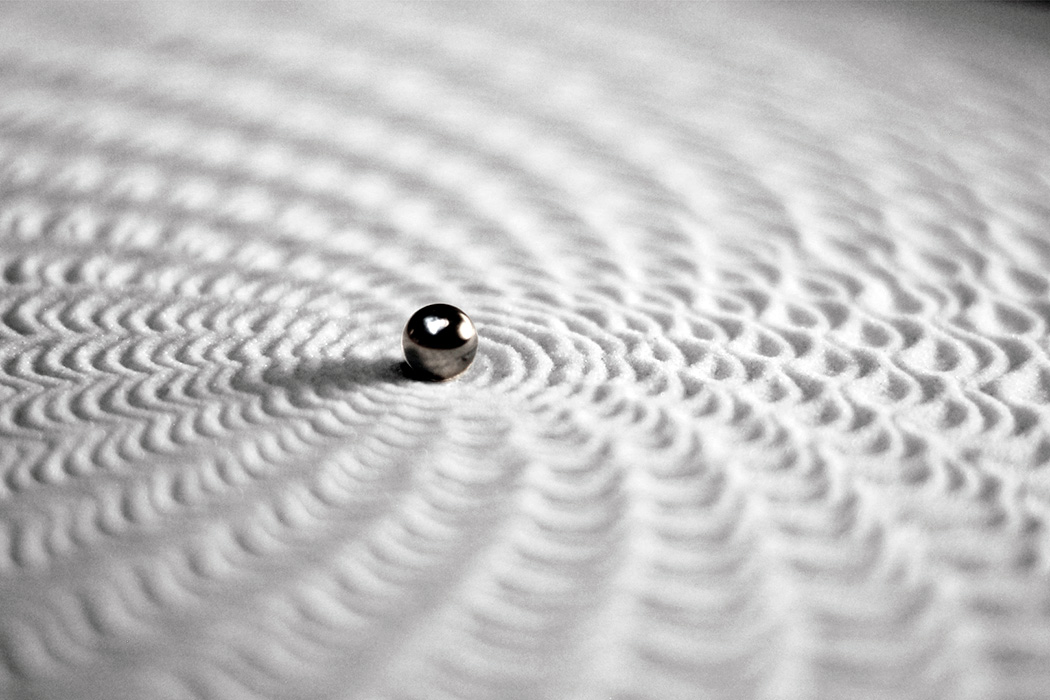 Seeing the sequence of new patterns forming while erasing the previous ones, made us think of this beautiful concept that fits perfectly with our purpose of creating an experience that lets you take a break, reflect and restart.

Thanks to the innovative mechanism, SANDSARA is able to move the sphere right into the very edge, thus allowing it to draw large paths that fill 100% of the sand bed. With all of that wasted space gone, they focused on creating an elegant form that immediately catches the attention of everyone who enters the room.

Infinite artworks in one single object. Creating new paths for SANDSARA is incredibly simple. Not only will you be able to choose from over 100 patterns from our growing library, but building your own patterns is very easy, as it understands X and Y coordinates.

Experiment with motion. Create new trajectories. Their iOS and Android app also allow you to download new patterns or translate existing polar or .svg ones, which means you will be able to load pretty much any path you want. The possibilities really are endless. 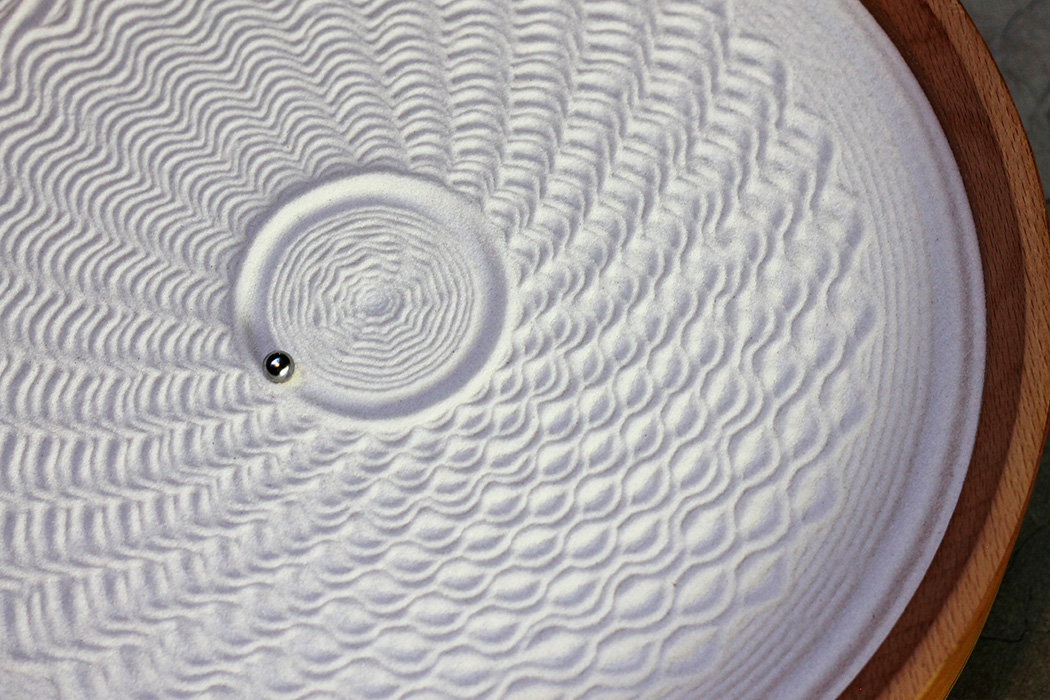 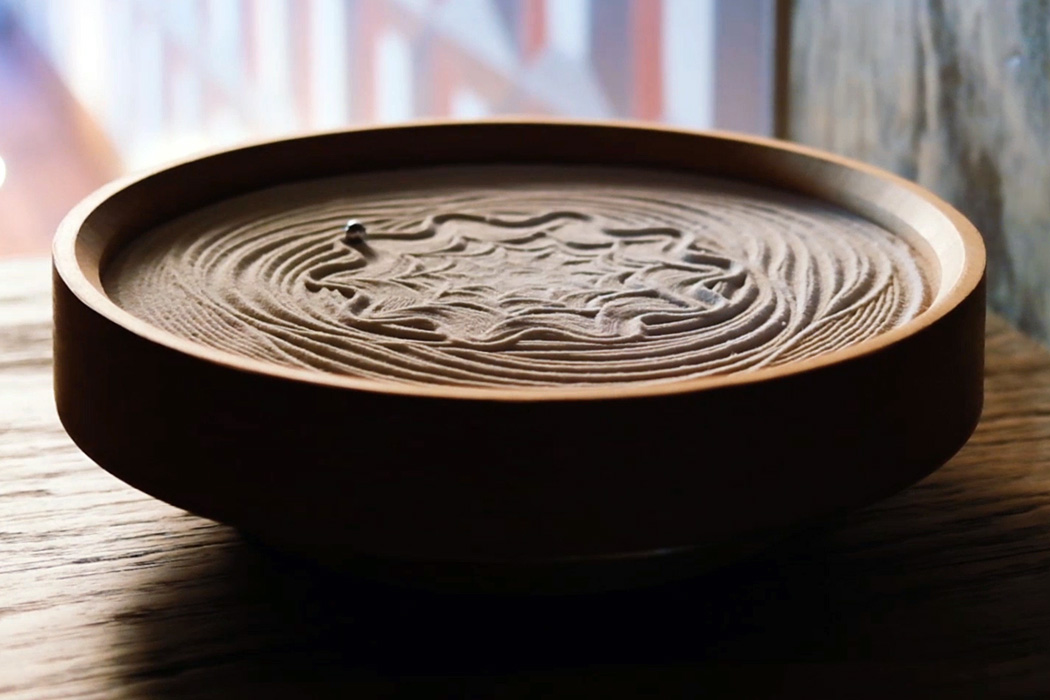 The team designed a frame that outlines the sand patterns and gives a fine touch without stealing your attention. The 45° chamfer in the edges is a subtle detail that merges the wooden fame with the sand bed into one.

Crafted from black walnut and birch because of their elegant appearance and durability, SANDSARA is machined out of solid wood, and hand-finished with an ultra-thin layer of natural wax to protect it and make the wood grain pop. It is soft to the touch and has a sleek matte appearance.

The Halo. The design is sober and timeless. It blends in perfectly in any room, the complex sand patterns are contrasted with the subtle circular shape.

The Stelle. Its form is meant to be the center of attention in any space. The design is eye-catching and it immediately becomes a conversation piece. The sand patterns precisely delineate the six-pointed star shape for an extra dose of wonder.

Note: All paths are compatible with both The Halo and The Stelle out of the box, the internal software features a shape avoidance feature that makes sure paths fill out 100% of the sand bed of each shape.

– The main goal was to keep the overall size of SANDSARA as small as possible while maintaining a larger surface for sand patterns.
– To achieve this, the team developed their own custom mechanism based on a SCARA design.
– Compared to cartesian or polar designs, SCARA provides unique advantages to maximize the usable area and keep the overall footprint small. This allows us to create The Stelle, which would be impossible using other kinds of mechanisms.
– While using SCARA provided additional challenges in the logic and software, as the X and Y positions needed to be solved using inverse kinematics, it was a challenge the team enjoyed and was quite worth it.

The final result is a streamlined piece of art that wastes no space and has a large sand bed, allowing the patterns to go right into the edge of the frame. 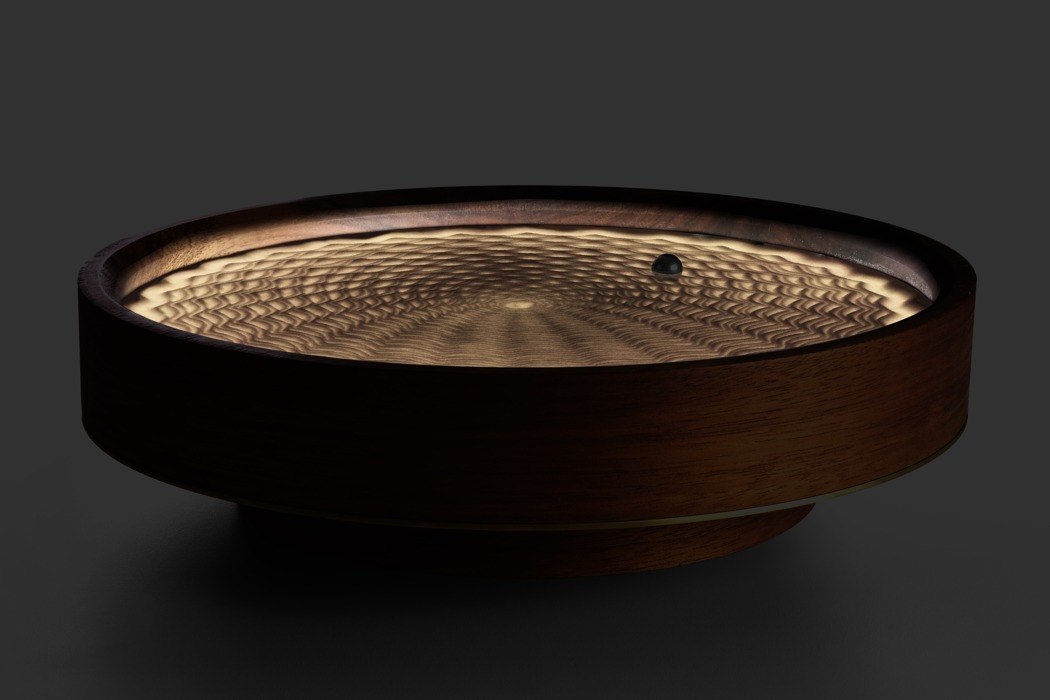 A hair-dryer has no name

I don’t know who’s been sending out the memo to designers to redesign the hair-dryer, but boy have we seen some incredible concepts in the…

Designed for use in tropical desert areas of Africa and the Americas where temperatures vary greatly between day and night, the Hope Tree is a…

A Phone that Probably Won’t Have Updates

The smartphone market has always been a tough battle, not for the faint-hearted. Microsoft has never been the strongest in that battle, unfortunately – with…