The CrossJack’s birth has a remarkable story to it. Invented by James Flippin, a trauma surgeon, the CrossJack came as an instinct to make life better… a trait doctors and designers both share with equal passion. Flippin was a young surgeon, tending to a trauma case where a man was gravely injured after a car fell off its jack and onto him. Flippin had to eventually deliver tragic news to the man’s family, and given that it was his first time delivering news of this nature, it impacted him profoundly. He would later go on to see that there were hundreds of cases of car-jack failures, where cars would slip off, injuring the mechanic or owner… and that prompted him to embark on tweaking the design of the jack, to make it much more stable to use. With a newly detailed base that features a wide cross-shaped design, increasing its stability, the CrossJack is the same old jack in a slightly new but noticeably safer design, thanks to its stable base.

The CrossJack’s design prompts one to wonder why car-jacks don’t already have wide bases. Its redesign is simple but effective. A collapsible set of plates sit at the bottom of the CrossJack that open up into a wide cross, giving the jack a spaced-apart, four-point base. This wider footprint prevents the car from being accidentally knocked off the jack, and landing on the ground, injuring anyone who may be working on it. The CrossJack’s tweaked design sports a base that’s nearly half an inch thick, and made of stainless steel, giving it a rugged sturdiness that makes the jack safer than most. When you’re done, the jack folds up to occupy exactly the same amount of space as any regular jack would. Sensible, right? I mean, you shouldn’t have to risk your life and limbs every time you go to change a tire. 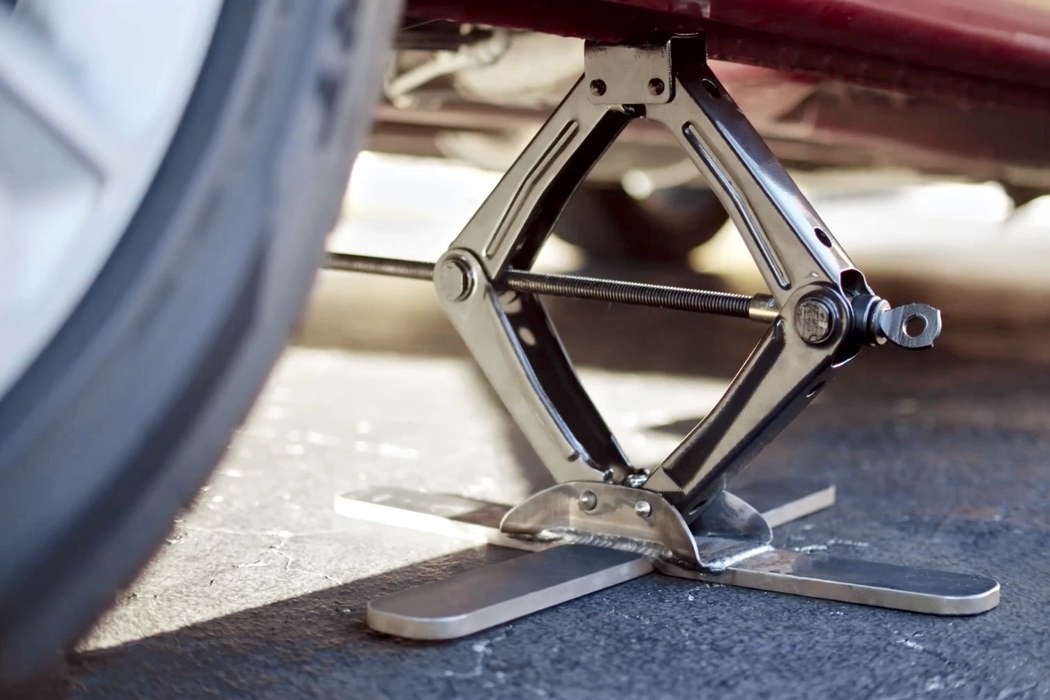 CrossJack is a new take on a 100-year-old design. Doctor/inventor James Flippin have taken the scissor jack, designed in 1920 and re-engineered it to provide substantially increased safety and stability. CrossJack aims to replace the current scissor jack in your vehicle without compromising the compactness and ease of use. 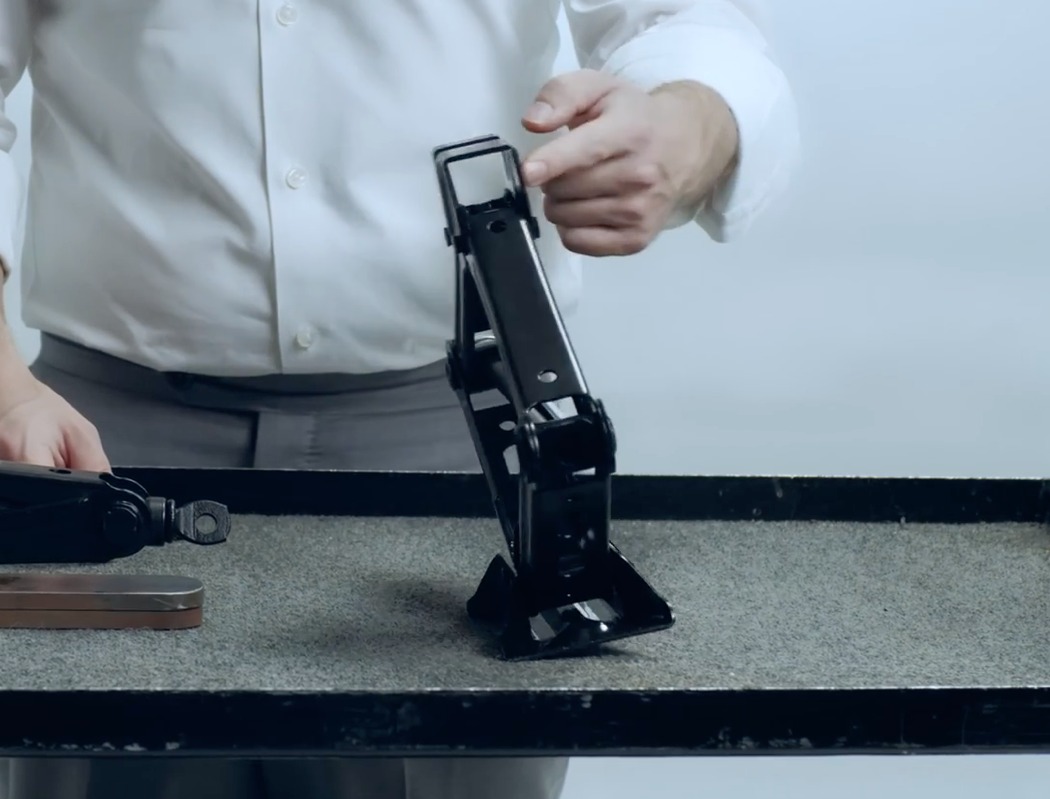 Current car jack as it is provides a base that’s only a few square inches in size, which makes it very unstable once the car is lifted up on to the jack. 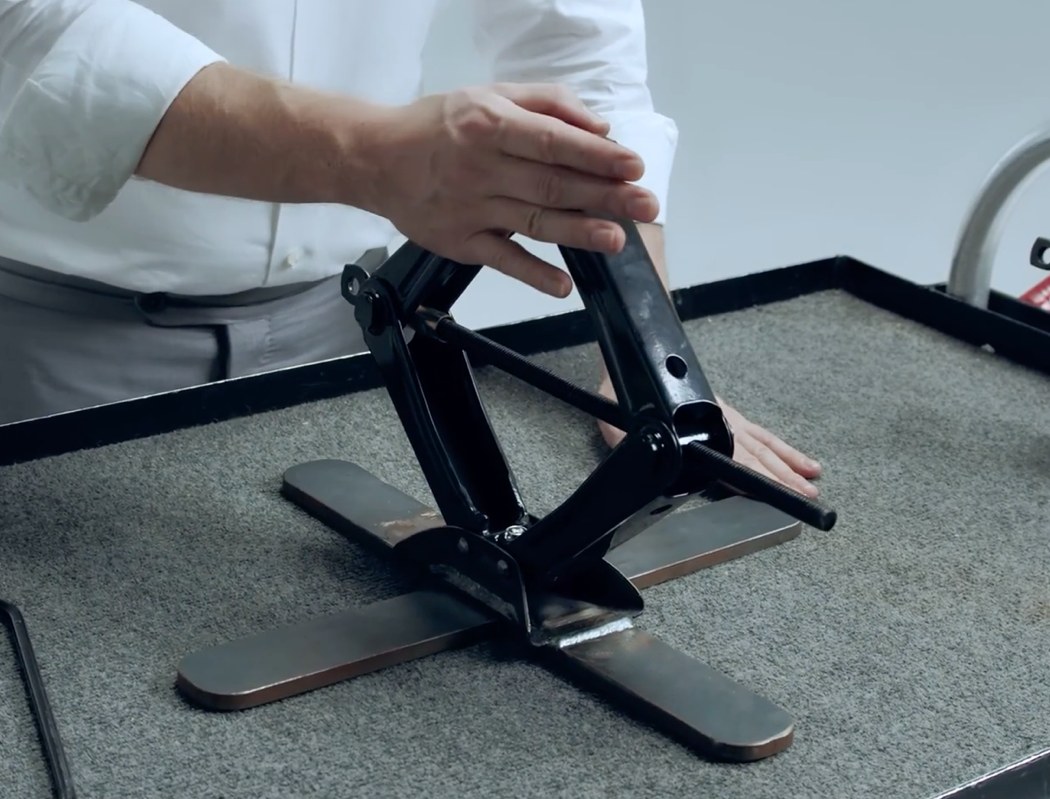 What CrossJack does is adds a base to the bottom of the standard scissor jack which gives several square feet of base which makes it substantially more stable. 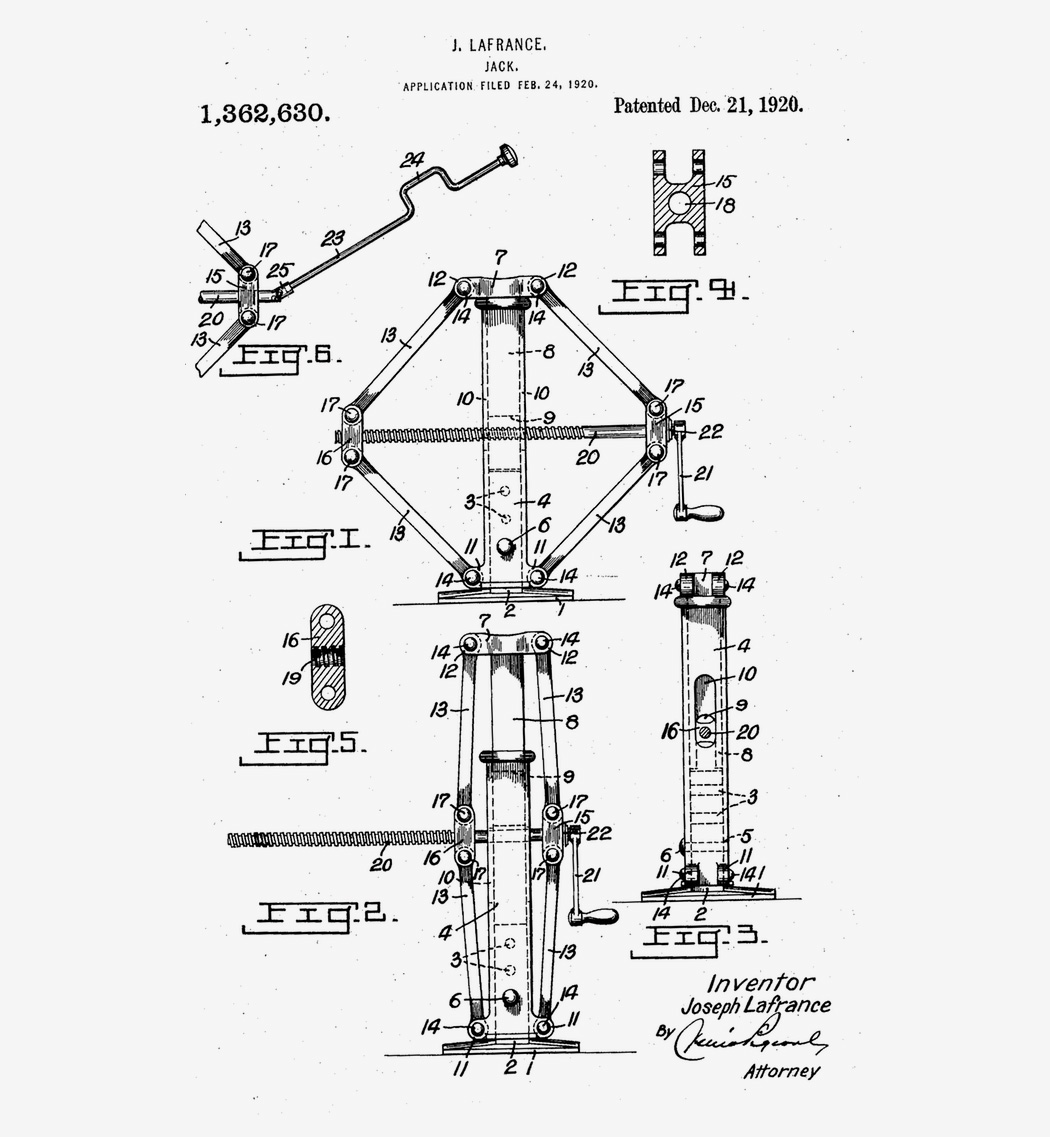 The original scissor jack design dates back to 1908, was updated in 1913 from an original design know as a Lazy-Tongs mechanism by Edgard Cremieu-Javal, and then again in 1920 by Joseph (Jack) Lafrance. Interestingly this “lifting apparatus” was originally designed in reference to lifting ladders. The scissor jack as we now know it didn’t enter vehicles as a standard until the 1970s. 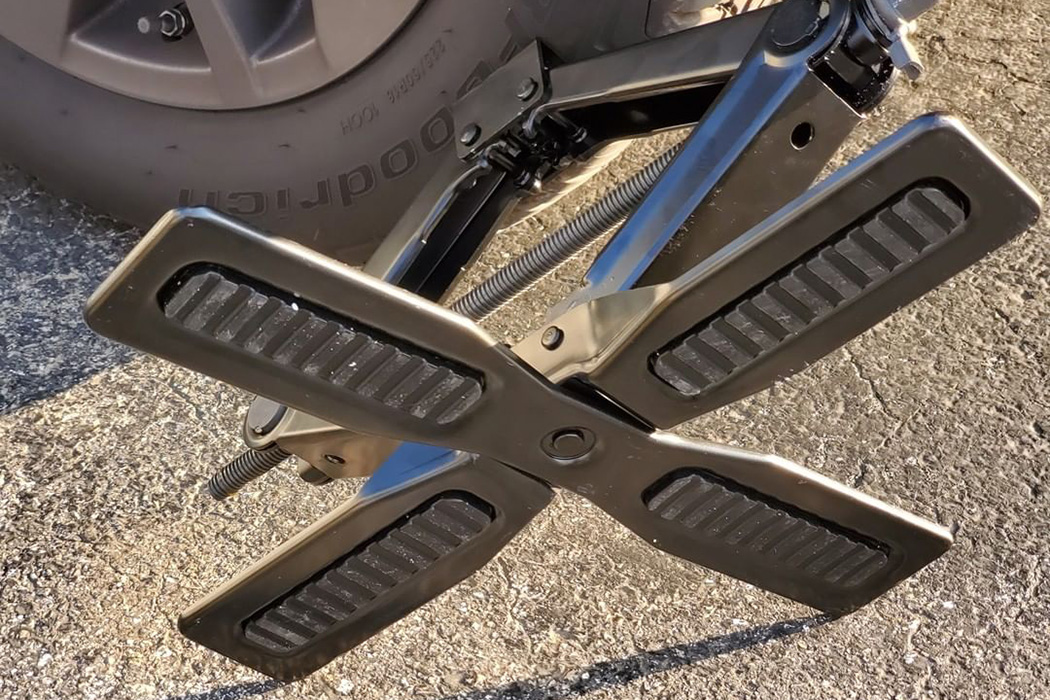 Now over 100 years later the team aims to create an overall design change that will update the scissor jack to the standards and requirements of today’s automotive industry. 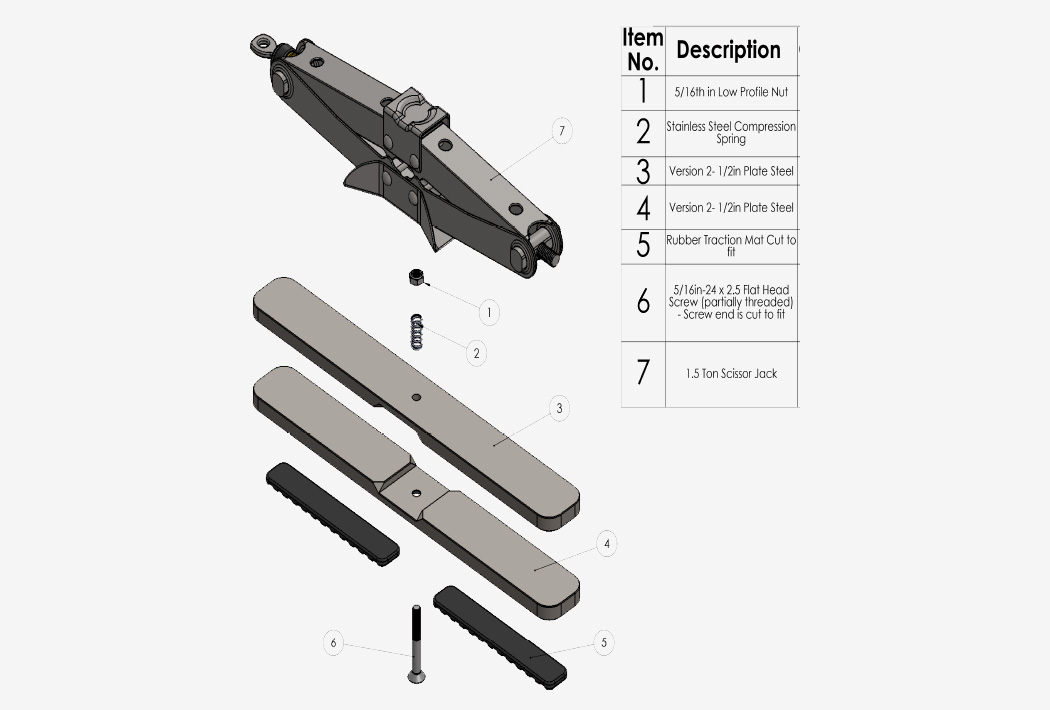 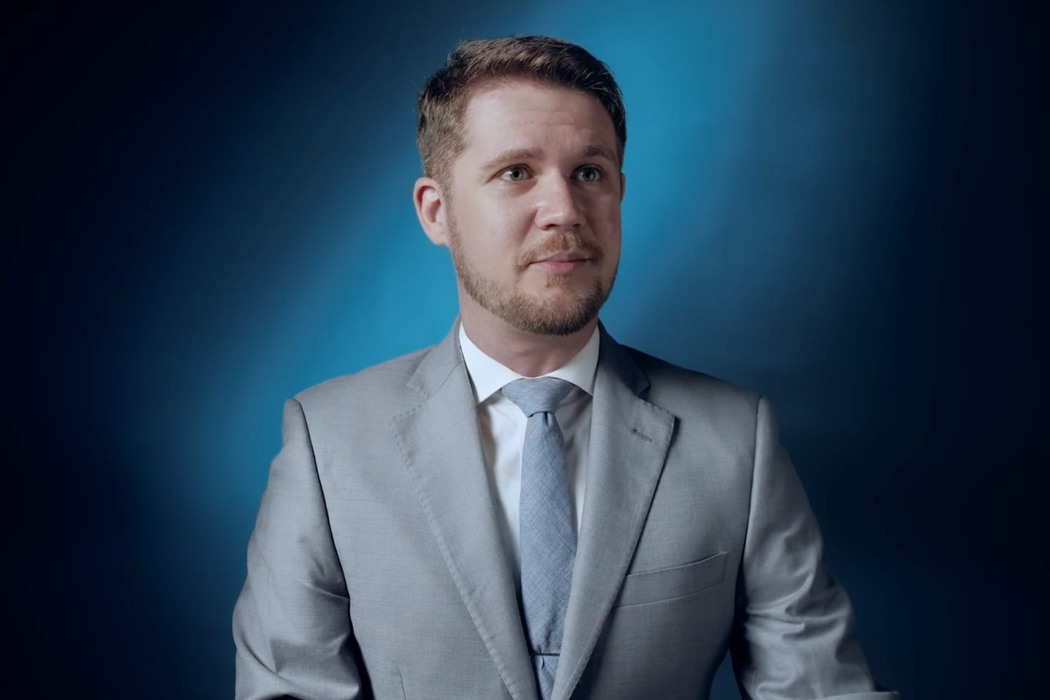 When he was a third-year medical student, a patient was brought into the trauma bay that would change his life. The patient was trapped under his vehicle after it fell off a jack during a repair. The patient’s heart was cut in half, and he died almost instantly. Dr. Flippin recalled an incident two weeks prior when he had knocked his own car off a jack while changing a flat tire. It was right there, in the middle of an on-call shift, that he sat down, and drew a better jack, which became CrossJack.

As a trauma surgeon, Dr. Flippin has seen the devastation a failing car jack can cause. Statistics like these are the reason CrossJack was created.

– 82% of those males were between ages 15-45
– 59% of all car jack injuries occur during a repair or tire change
– 92% of all car jack accidents were caused by the car jack itself
– Carjack accidents can lead to all kinds of injury, from amputations and disfigurement to crushing of internal organs and death.
– 81% of car jack accidents are from passenger vehicles (not trucks or light trucks)
– 74% of car jack injuries occurred because the vehicle slipped/fell off the jack.
– 49% of all injuries involving car jacks were either considered moderate or severe

Two years ago CrossJack started with just an idea. An idea that has gone from a drawing on a piece of paper to a simple prototype to an actual tested product.

From Bight Light to Nightlight

Starrynight is a combination light and nightlight that recreates the starry night sky while being energy efficient. A transparent light-collecting module (provided by Mechanical and Systems…

The Rota is nothing if not adaptable. Its small size allows it to fit anywhere, and it even comes with a rack for you to…

This biodegradable prescription pill bottle is an open-source design made from paper & its child-proof!

Prescription medications are only packaged in stores in plastic containers and about 90% of them are not recycled, according to Tikkun Olam Makers, an Israel-based…

So much happened in the last week that it’s common for announcements to either spill into the following weeks, or go completely unnoticed. In a…