While ‘mouth-breather’ has now found itself as a harmless, childish insult in cult-Netflix-series Stranger Things, breathing through one’s mouth is considered easier, but less healthy… especially during exercise. Breathing through one’s nose results in air making its way directly into one’s lungs, while the nose’s internal mechanisms trap dust and debris, making the air you inhale cleaner. It’s often considered a good practice to inhale through one’s nose, and exhale through the mouth, but not everyone is blessed with clear nasal pathways.

With as many as 6 patents (and 9 pending ones), Intake turns mouth-breathers into nose-breathers. Unlike those nose-strips that promise to work but fail to deliver on most accounts, Intake has a pretty straight-forward way of widening your nasal passages. Intake’s nose-breathing solution relies on two simple steps. Intake’s kits provide adhesive-strips with magnets on them that fasten to each side of your nose, right above the nostrils. A precursory alcohol-wipe makes sure the skin around your nose is free of dirt, dead skin-cells, or skin-oils that would cause the magnetic strips to fall off. The next step is fastening Intake’s nasal bridge across your nose. The relatively rigid bridge attracts the magnets towards it, pulling gently on your nostrils to widen them. With wider nasal pathways, it’s much easier to breathe through your nose rather than your mouth. Intake’s design solution is non-invasive, discreet, and works even through the sweatiest of workouts (and even in the rain)!

While mouth-breathing is an easier and faster way to get oxygen into your system, your mouth isn’t equipped with the same oxygen-delivery and microparticle-trapping mechanisms as your nose. Breathing solely through your mouth causes your mouth to dry up faster (making you thirsty often), while also increasing risks of chronic allergies and even breathing problems like asthma. Breathing through one’s mouth while asleep can even increase chances of sleep-apnea, while also causing halitosis, or bad breath. Intake’s sleek, barely-noticeable solution is perfect for both athletes as well as regular people. Its tiny design doesn’t obstruct your view, and even allows you to wear gear like masks, goggles, helmets, and glasses on top of it. Designed to make nose-breathing easy for everyone, Intake can be easily snapped on or off whenever needed, and can be used anywhere, in the gym, while skiing, swimming, jogging, riding, or even when sleeping! 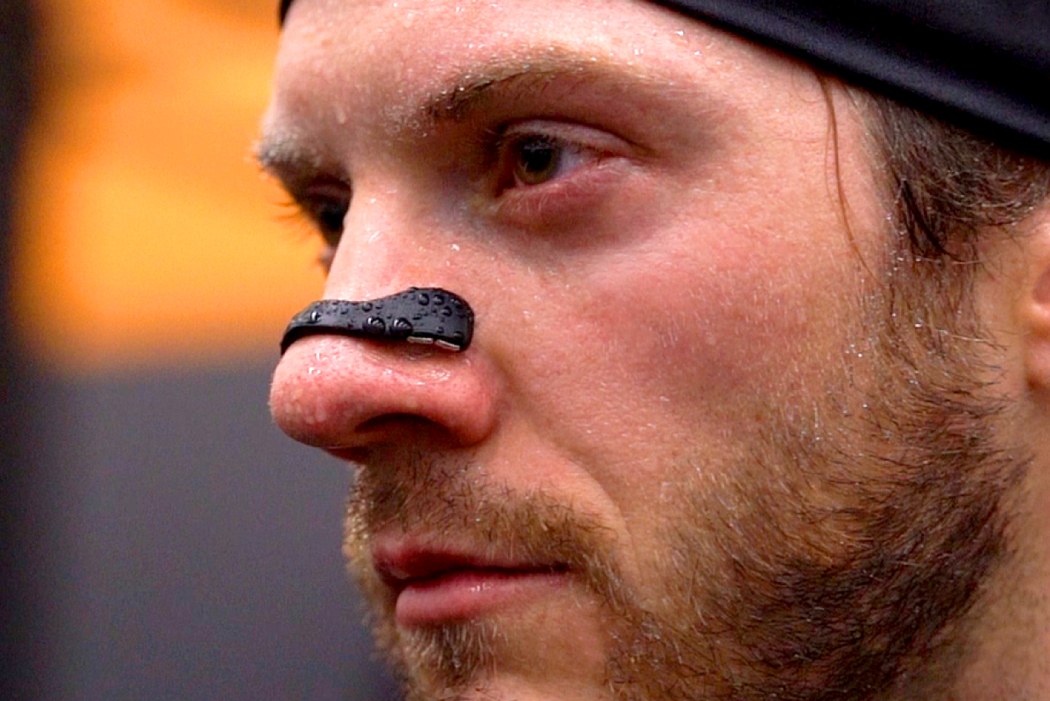 The world’s first magnetic nasal band that opens your nasal passageways to their widest capacity, allowing you to experience full, deep breathing. 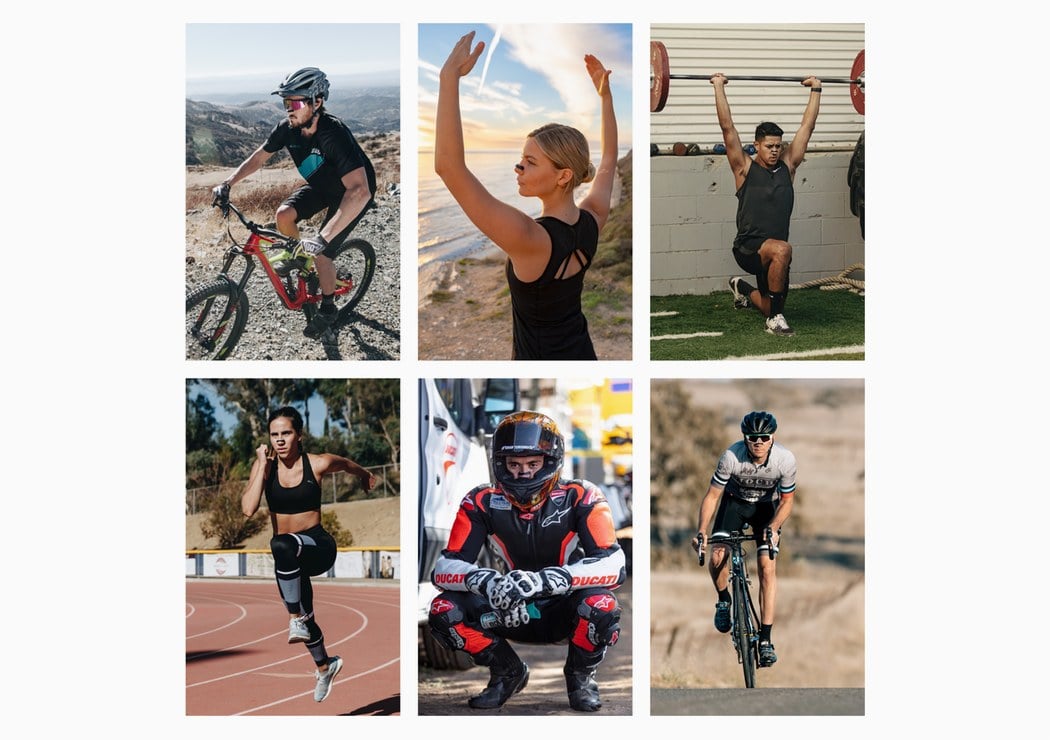 Intake works by allowing you to breathe through your nose even at increased heart rates, unlocking a physiological process that helps your body build strength and increase resilience–even in the face of the most challenging training regimens. Because you’re breathing more efficiently, you’ll be performing more efficiently, whether you’re a hardcore athlete or someone who just wants to give their body the best edge it can get. 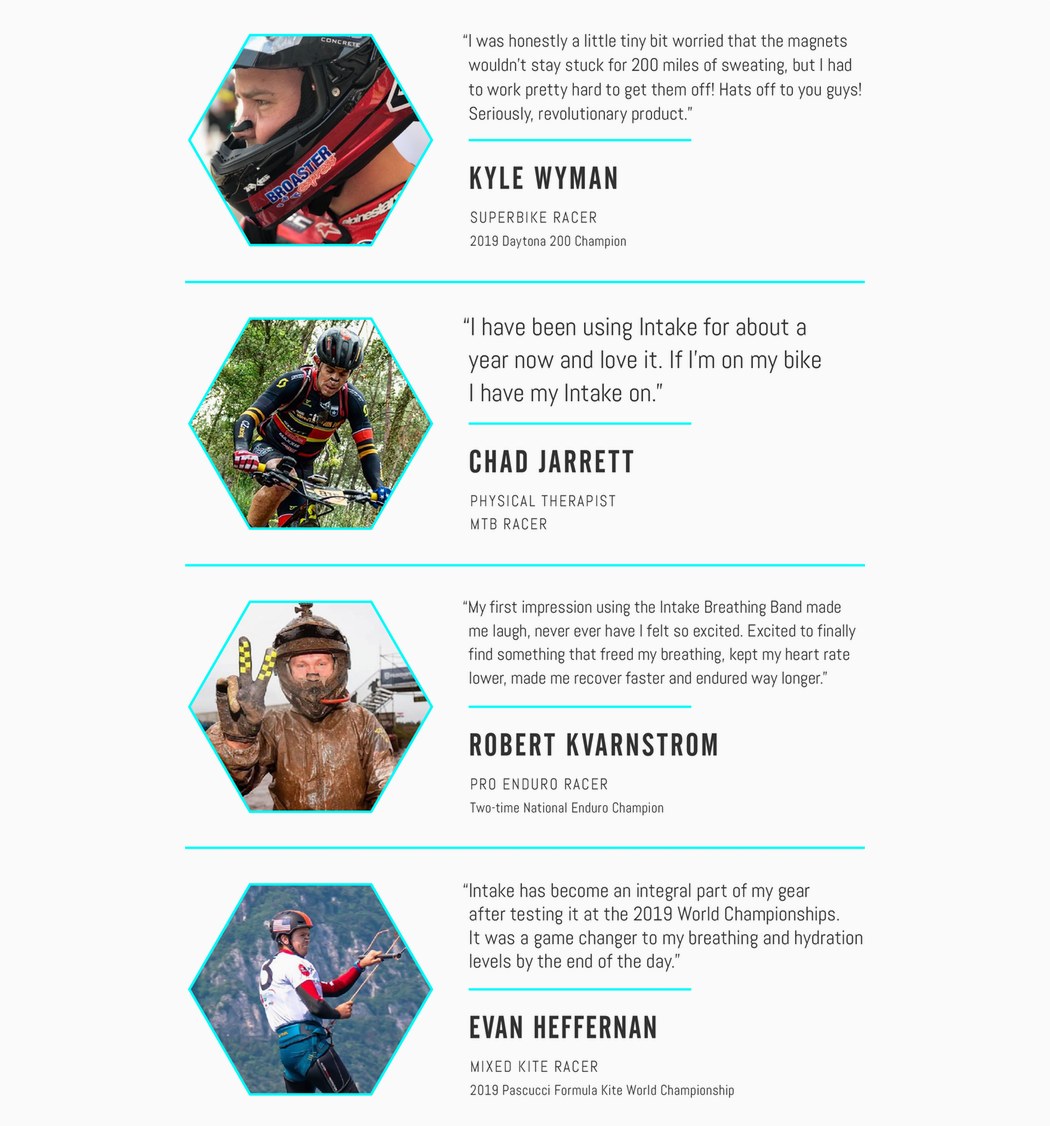 What some of their early GEN 1 users have said. 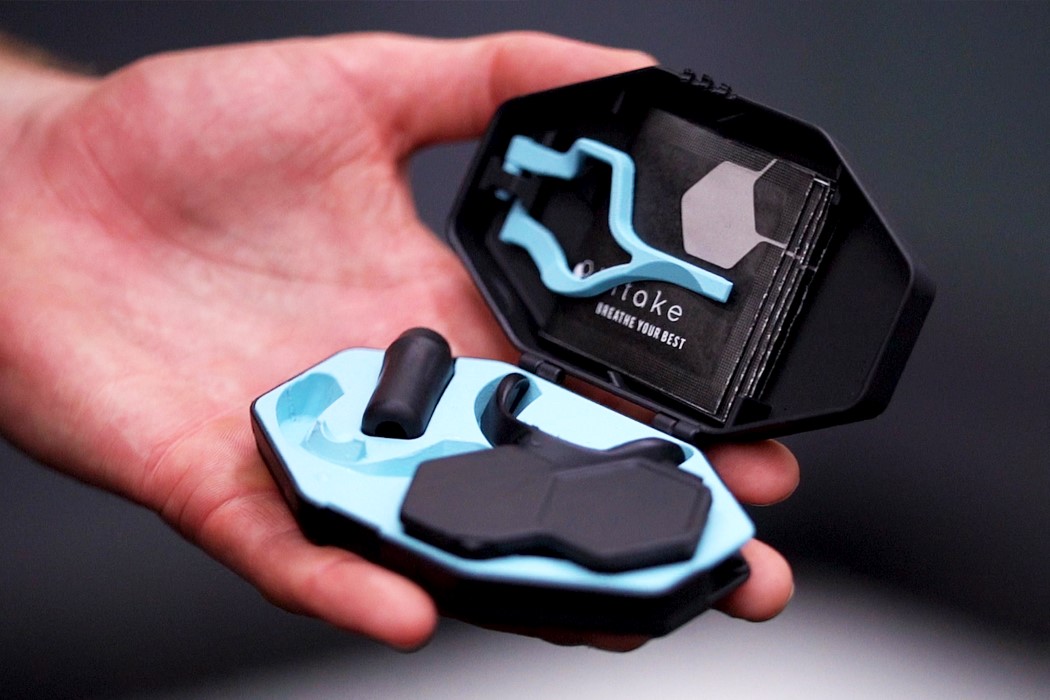 Below: How Does It Work?

Step 1 – Clean each side of your nose with an included alcohol wipe to remove any dirt or oils from the skin.

Step 2 – Using the applicator, apply one adhesive tab to each nostril just above the pinch point. Press the edges of the tab into your skin.

Step 3 – Apply the Intake band over your nose. The magnetic ends of the band will “click” into the tabs, opening your nose. 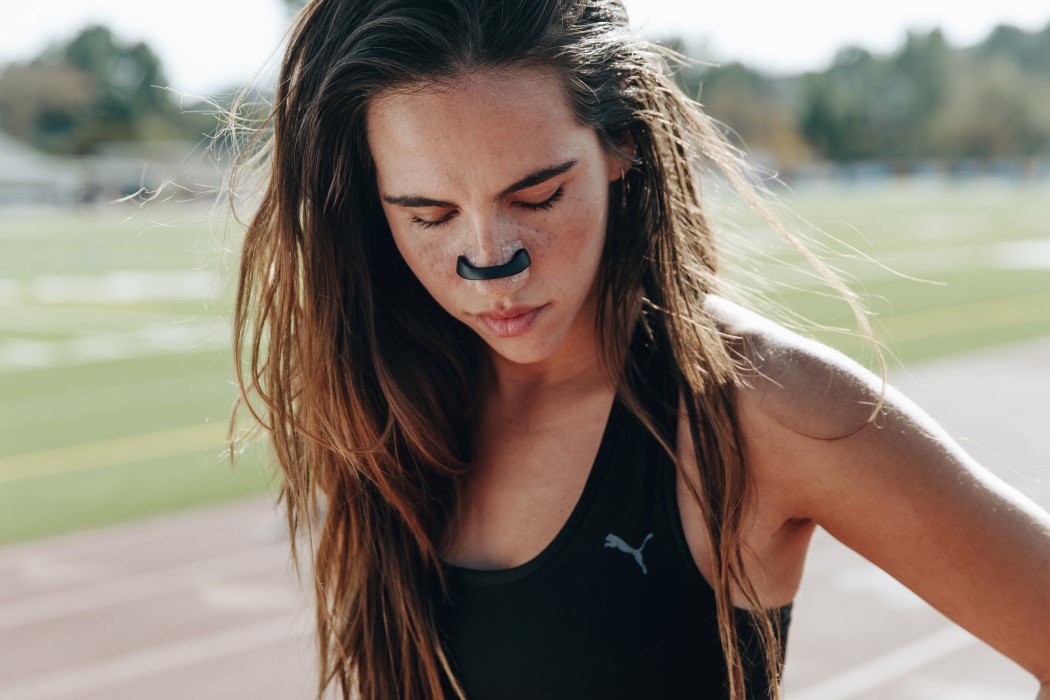 INCREASE NITRIC OXIDE – Nitric Oxide is formed in the nasal cavity, and it’s vital to your body’s function. It’s a vasodilator, which means it allows your blood vessels to relax so that blood flow increases and your body is able to deliver more oxygen to your muscles and organs. This means optimal endurance and stamina, and faster recovery.

BOOST COGNITIVE FUNCTION – Nasal breathing stimulates the amygdala and hippocampus, balancing your mood and improving short term memory and focus. It also stimulates the parasympathetic nervous system, which is associated with feelings of centeredness and relaxation.

MAINTAIN HEALTH – Breathing exclusively through your nose protects your immune system in two ways: your nose filters particulates and humidifies the air reaching your lungs, which cuts down on inflammation, and the nitric oxide in your sinus cavity acts as an antimicrobial, helping to inhibit pathogen growth before it can enter your body. 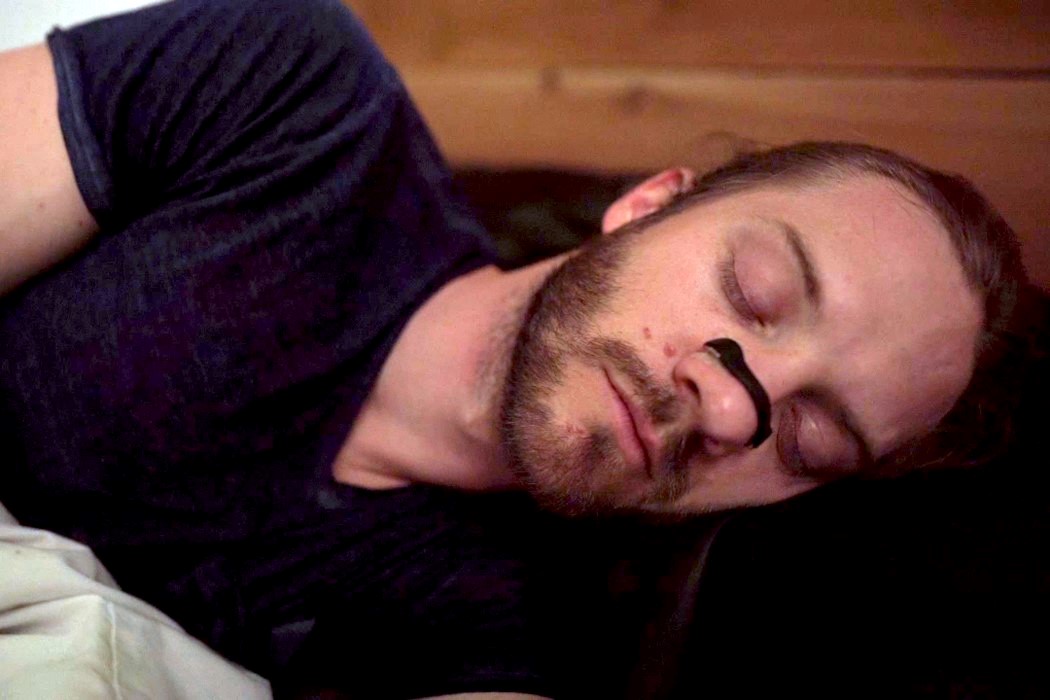 Many of their test phase users have also used Intake for sleep, and have reported feeling more rested and energized upon waking. Deepen your sleep, cut down on snoring, and utilize your breathing like never before. 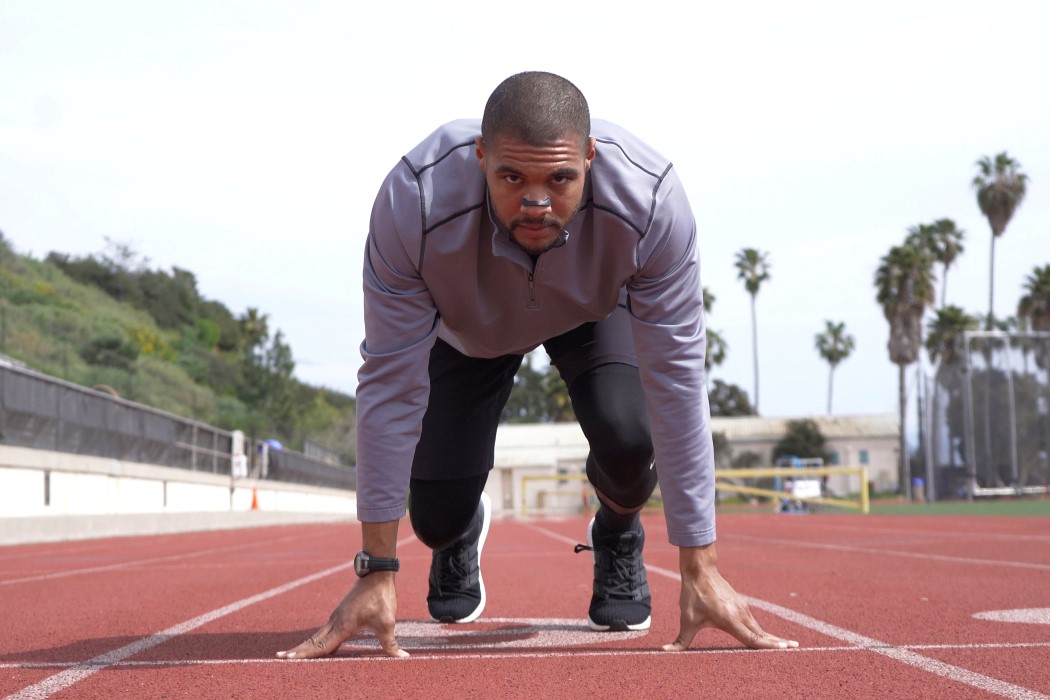 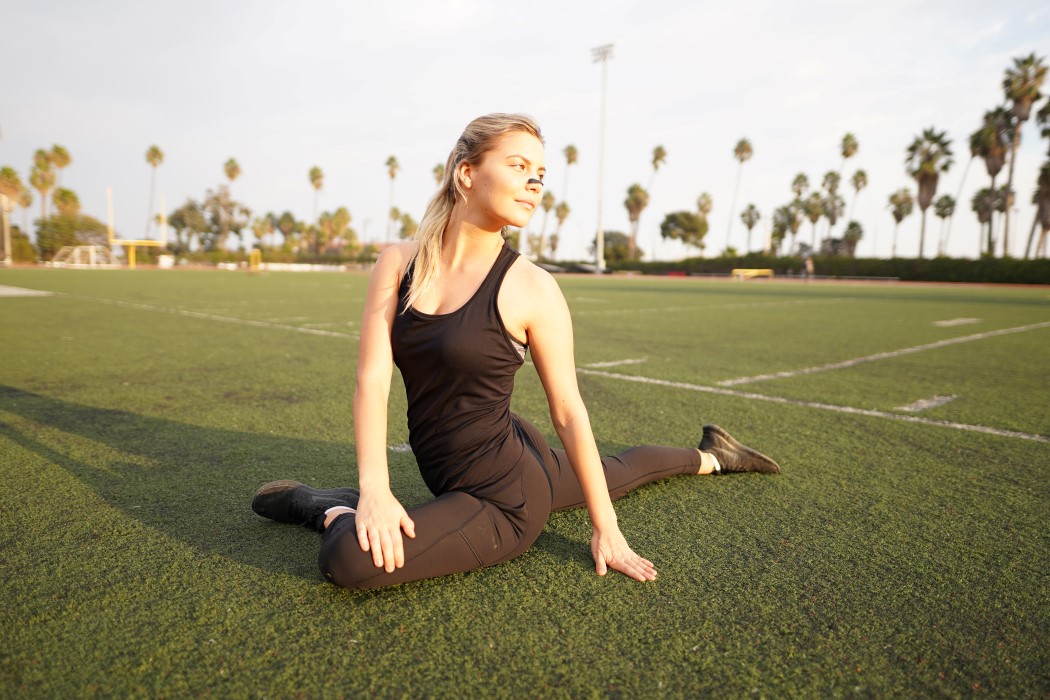 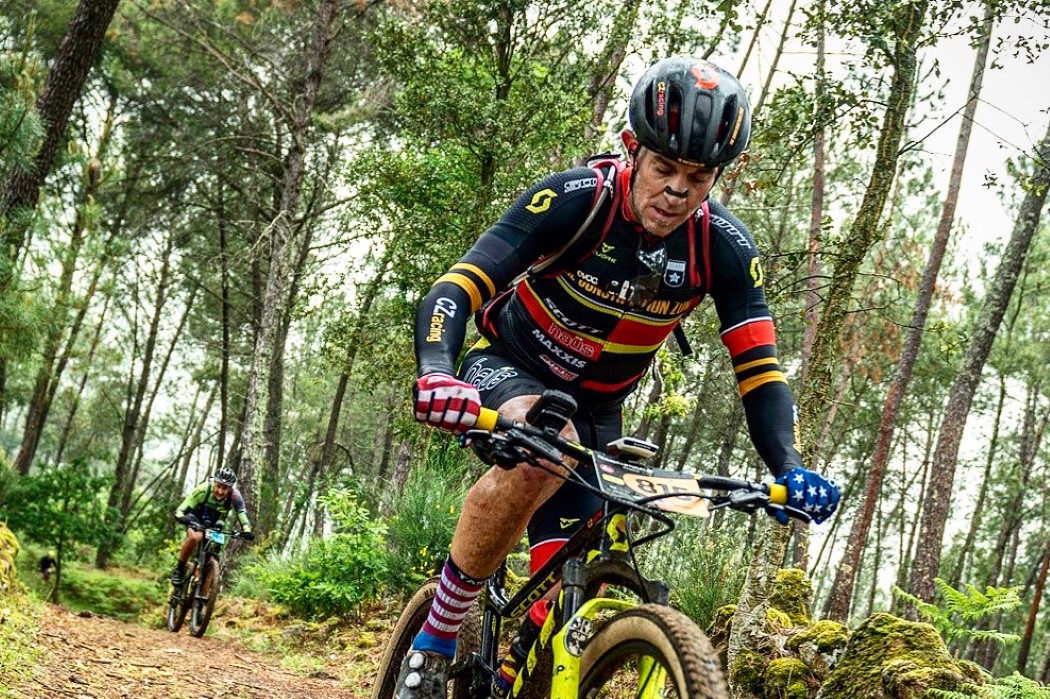 Unfortunately, this is not a Lumia 940 leak.

Based on rumors and speculation floating around about Microsoft’s much anticipated Lumia 940 and Lumia 940 XL, Jonas Daehnert’s vision for the smartphone is a…

The Sonic Decanter is unlike any other, using safe but effective ultrasonic energy to make every wine better! The patented ultrasonic technology transforms the molecular…