You’ve probably heard of or seen a Möbius strip, possibly even in the Avengers Endgame movie. Simply put, it is a loop with a half twist in it. This half twist allows the Möbius to be single sided and single edged. There’s no front or back to the Möbius strip, to the math inclined it is it is non-orientable. The surface you see is both the front AND the back, and if you traversed its surface with a pencil, you will end up where you began. It literally is an infinite loop. The Möbius strip is a fascinating piece of geometry that, given its weird topology, is quite challenging to reproduce. This particular desktop sculpture is made using a complex 5-axis CNC milling machine setup that is capable of carving out the complex Möbius geometry.

This 3D Möbius Strip sculpture comes from AltDynamic, the same guys who brought us the Orbiform and the PentaOrbiform, seemingly impossible pieces of un-spherical geometry that could roll around just like a sphere does, thanks to the fact that they’re constant-width solids. Taking their love for geometry and metal to the next level, AltDynamic decided to pay homage to the Möbius strip… a piece of geometry that they claim has never ever been fully CNC machined in 3D before.

Machined from 6061 aluminum, the Möbius Strip sculpture sports a beautiful satin anodized finish that shines without ever becoming a fingerprint magnet. As a hat-tip to the CNC machined nature of the strip, AltDynamic decided not to buff or sand out the toolpaths, so each Möbius comes with faint microtextured toolpaths which show where the endmill carved away the metal… almost like an artist’s signature. Available in multiple colors, the Möbius Strips makes a striking collectible for people who have a high appreciation for mathematics, geometry, and the junction between science and art! 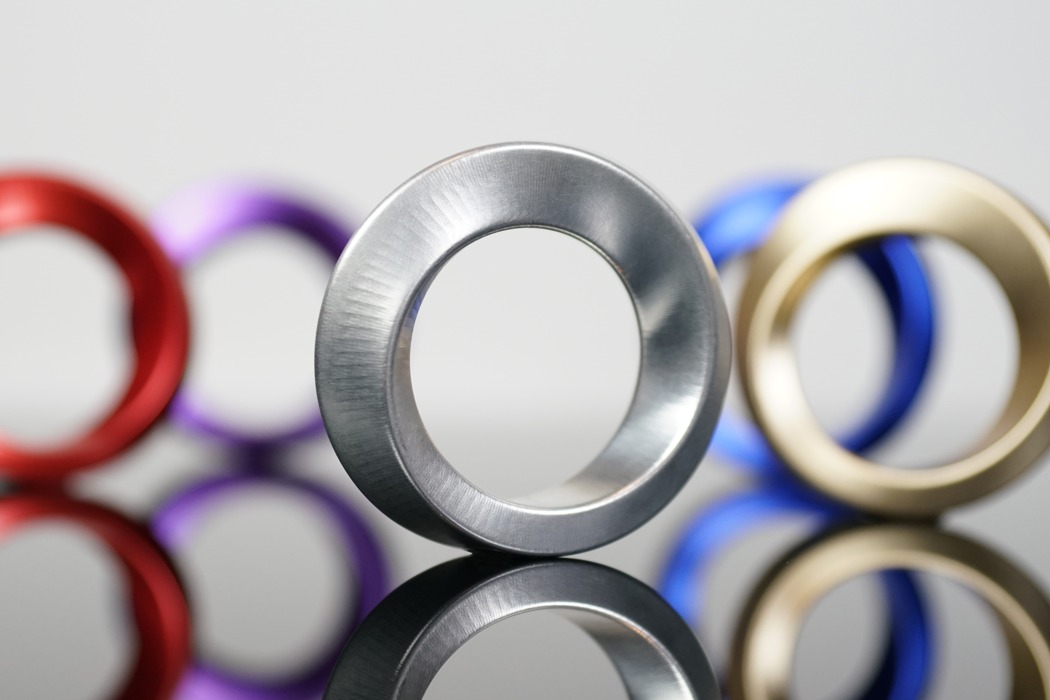 About the Möbius Strip

The world’s first fully CNC machined Möbius Strip. A single sided, continuous surface reimagined by AltDynamic. The Möbius strip is known by many names, such as Moebius, Möbius band, infinity ring, Möbius loop, infinity ribbon and many more. Regardless of which name you may know it, the Möbius strip is one of the most famous surfaces in modern mathematics. 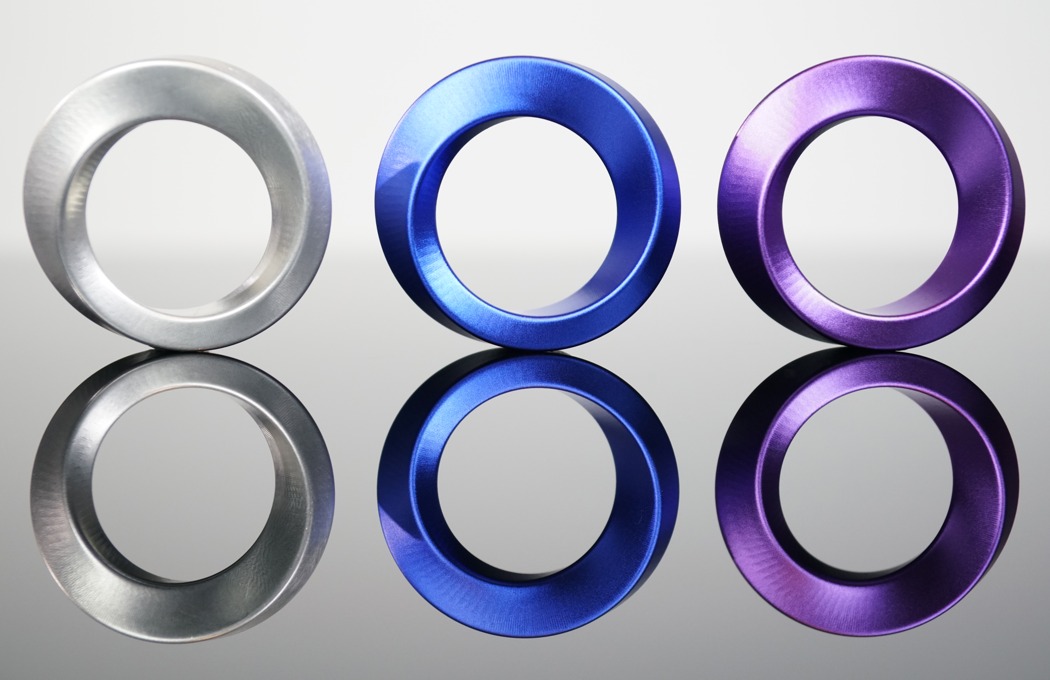 After its first documented discovery in the 3rd Century A.D., it fell into relative obscurity. It would take approximately 1,600 years until it was independently mathematically discovered by mathematicians August Möbius in September 1858 and Johann Listing in July 1858. (Interestingly, both students of Carl Gauss, one of the most influential mathematicians.) 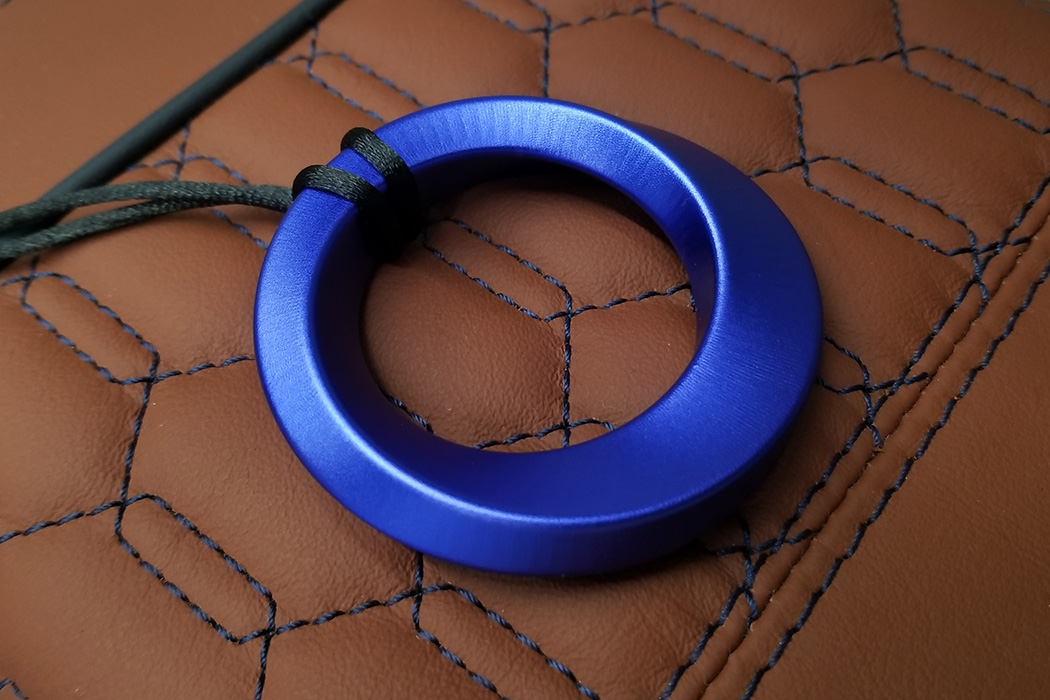 Due to its unusual topology, Möbius strips are very hard to fabricate from nearly any method and are typically made by twisting strips of paper. The goal of this Kickstarter is to make the highest quality Möbius ever constructed using 6061 aluminum and modern machining techniques. 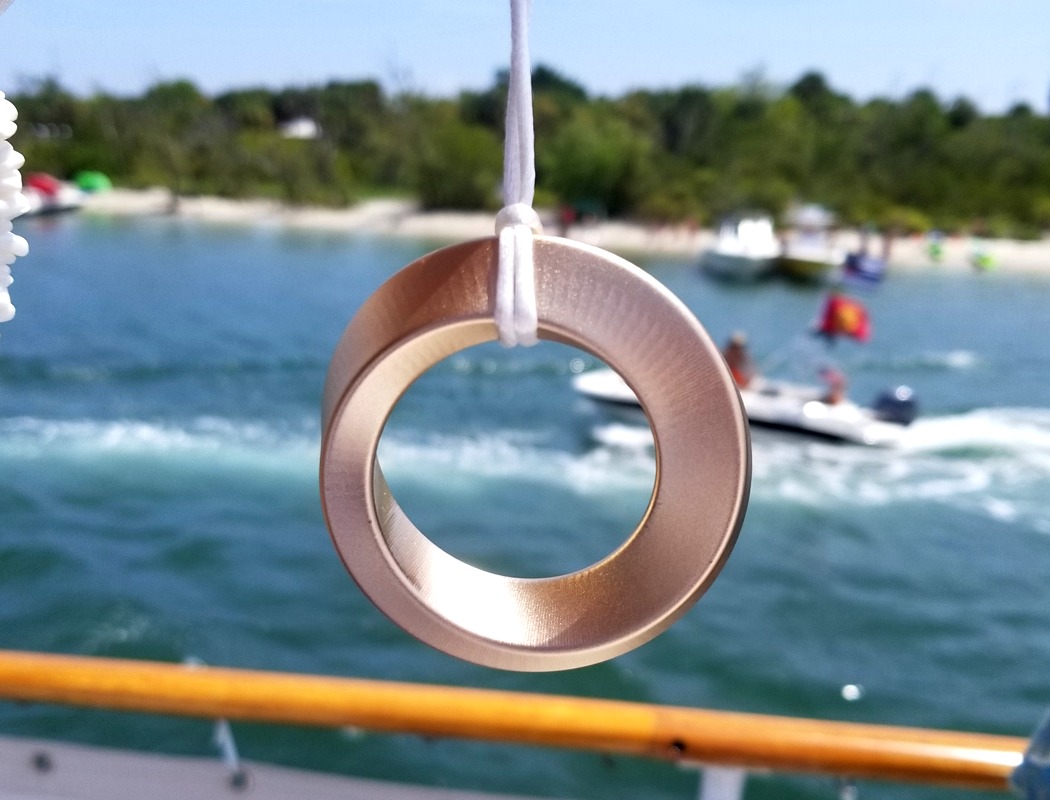 The Möbius is a strange shape. It is a one sided, single edged, non-orientable, two-dimensional surface trying to live in our three-dimensional world. A mathematically idealized Möbius strip would have a cross section of no thickness at all, just a line. The front and back blend into one infinitely thin surface. However, in order to exist in the 3D Euclidean space we do, it must have some thickness. In our Möbius, we have designed a golden ratio cross section.

The fascinating property, which made the Möbius surface famous and considered a biblical symbol, is that it is one sided. If you follow the path of the Möbius with your finger, you will arrive at the same spot where you began. Artist M.C. Escher displayed this property in his 1963 piece, Möbius Strip II. Above is an animated version of his original work. 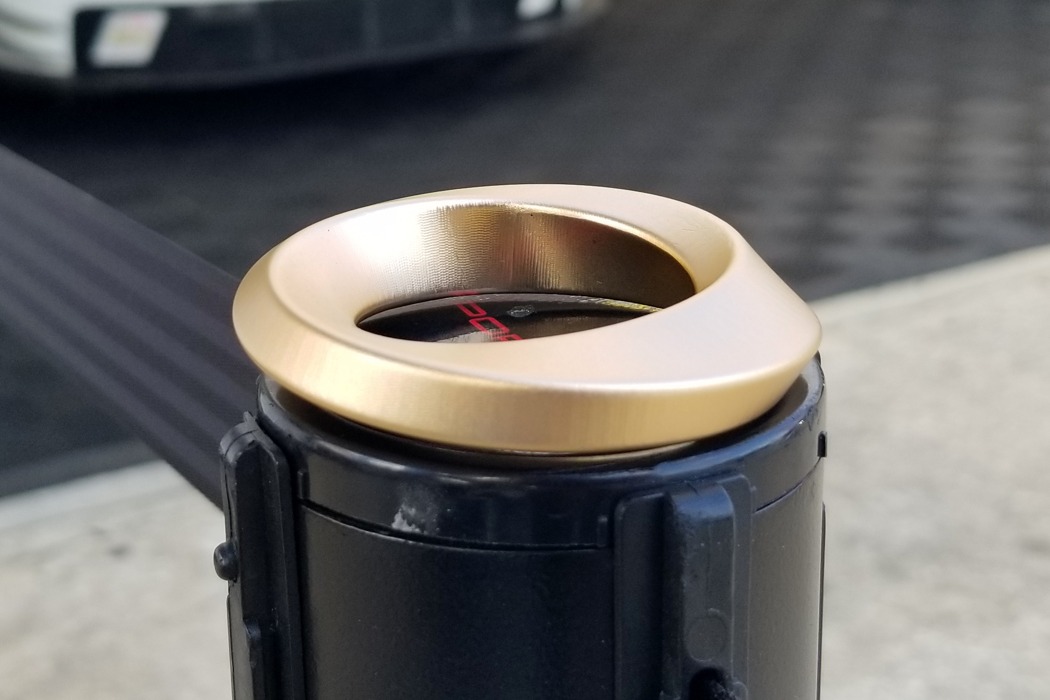 The Möbius falls under the branch of study known as topology and is considered the simplest non-orientable surface. Non-orientability can seem peculiar at first glance, since everything in our world is oriented (can be given a direction). Orientability is the property whereby we can give direction to determine up vs. down. An orientable surface has two sides. We can orient a surface by using the normal unit vector from any point on the surface, and can establish direction by which way the vector points (vectors have magnitude and direction).

As can be seen in the diagram above, the normal vector never lifts from the surface and yet is still able to point in the opposite direction once it has moved all the way around (note it takes two loops for the vector to come back to its original starting point and direction). One point can have two normal vectors, however, the opposite pointing vector never switched to the other side of the surface (there isn’t a 2nd side in this case). This is a violation of orientability. To be oriented, a single point on a surface can have two normal unit vectors pointing away from each other, such as pointing inward and outwards on a sphere, but those vectors should not be on the same side.

To visualize sidedness, consider painting the inside wall of a cylinder red and the outside wall blue. Similarly, try painting a Möbius strip two different colors. On a Möbius , you could only paint with one color since there is just one side. 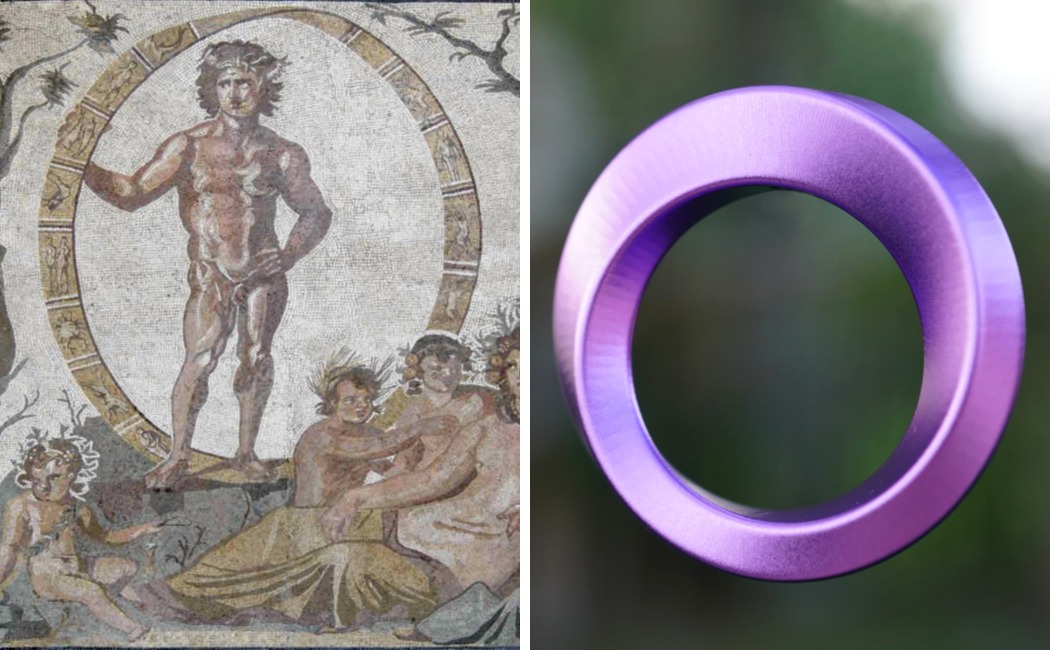 Left: The earliest known picture of a Mobius Strip, 3rd century Roman mosaic. It is on display in the Glyptothek Museum in Munich. The standing individual is Aeon, Greek god of time.

Möbius strips can be constructed in many designs and variations. Their design takes inspiration from the earliest picture of a Möbius known to exist, the nearly 2,000 year old Roman mosaic shown above. 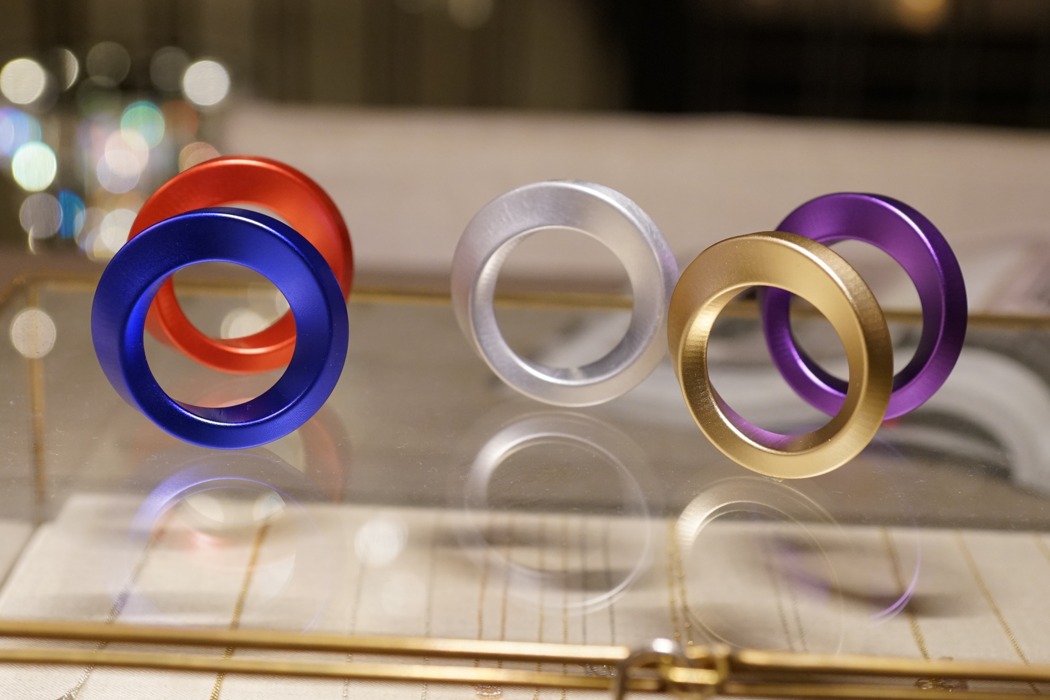 Unlike many Möbius, our unique version has a uniform twist along its circumference. This allows their design to stand upright if it is on a level surface, otherwise it will roll. 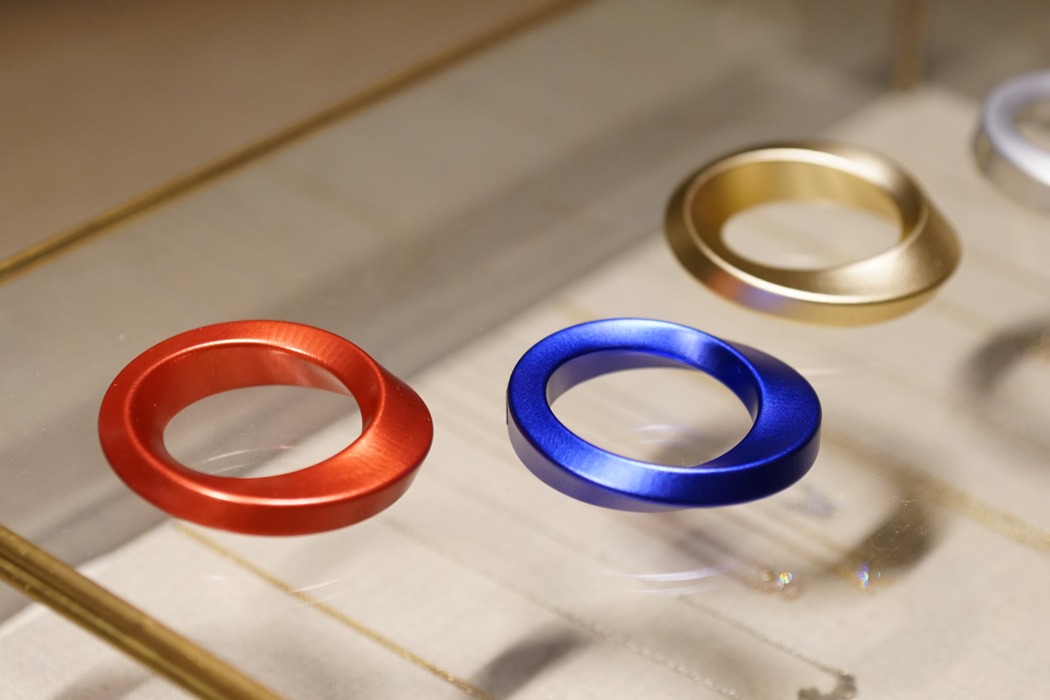 Each ring is approximately 2.5 inches in diameter and .5 inches at the thickest point. Each weighs just under 2 oz., 56g.

In order to fabricate the highest quality Möbius ever constructed, they have decided to Computer Numerical Control (CNC) machine it. The precision and quality from our prior Kickstarter campaigns has been carried over to this one. All Möbius’ are CNC machined from solid blocks of aluminum. They will NOT be casting them! 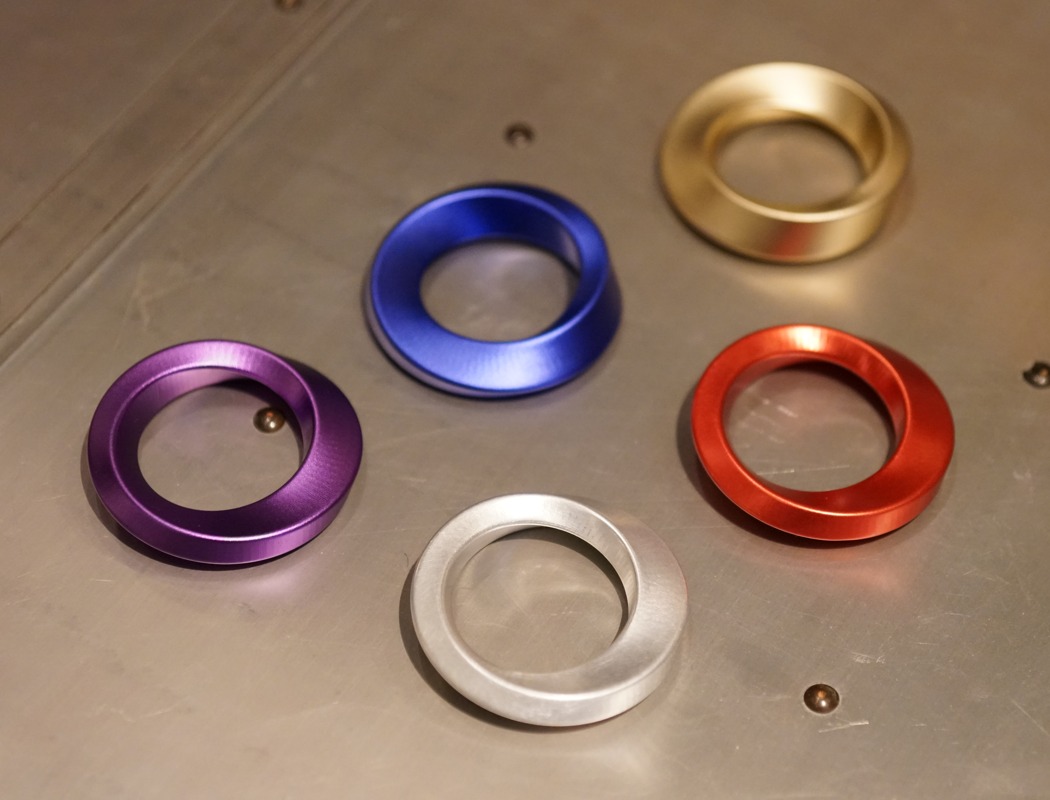 The surface finish will be satin, and show a subtle textured toolpath. It will hide fingerprints and be easily cleaned with hand soap and water if needed.

The colors available on the Möbius are achieved through anodizing. This creates an extremely strong and durable surface which is corrosion-resistant, scratch-resistant and won’t stain or rub off. Apple uses anodizing on nearly all of their products. We are offering these colors: raw aluminum (silver), red, blue, black, purple and champagne. Even though we are anodizing the part, racking marks from anodizing are virtually eliminated. 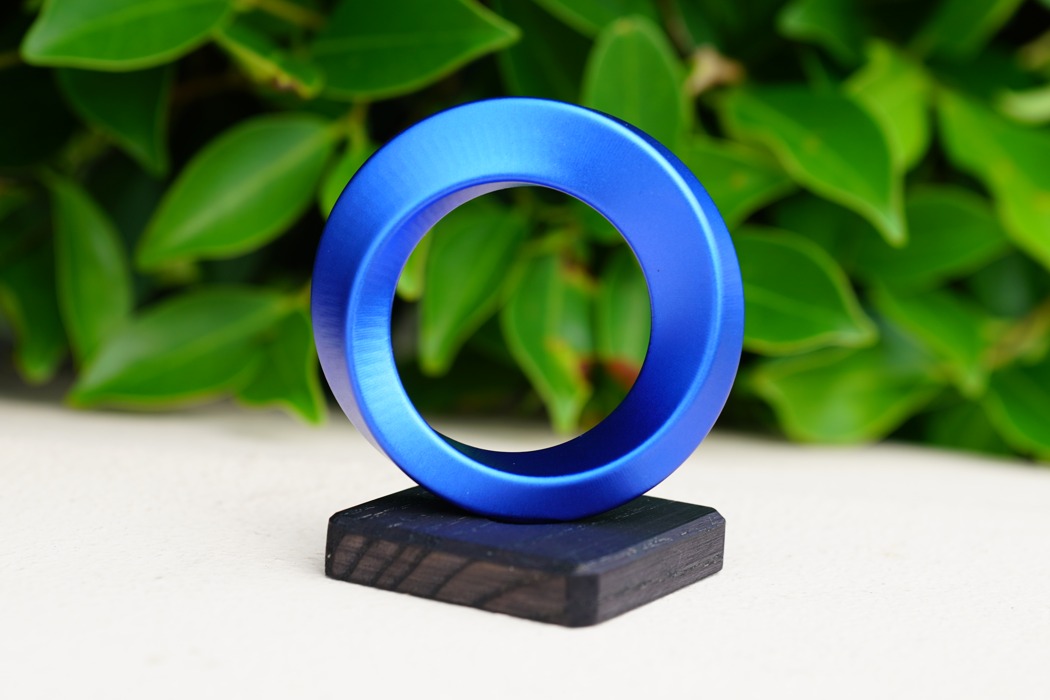 Henry Smallbone’s FLANEUR digital camera bends the general notion of how a smart camera needs to look like and how’s one going to use it….

Inspired by the prominent role and place of grand pianos in homes, the Intermodality desk is just as grand. With a design that follows the…

Our Common House is a household design concept that’s part-address sign and part-birdhouse, designed to increase avian-urban biodiversity. When we’re not thinking about whether or…

The Y-A FUYU HIGH is a collision of two distinct clothing brands: Y-3 and ACRONYM. This far-out footwear design is a twist on the winter…