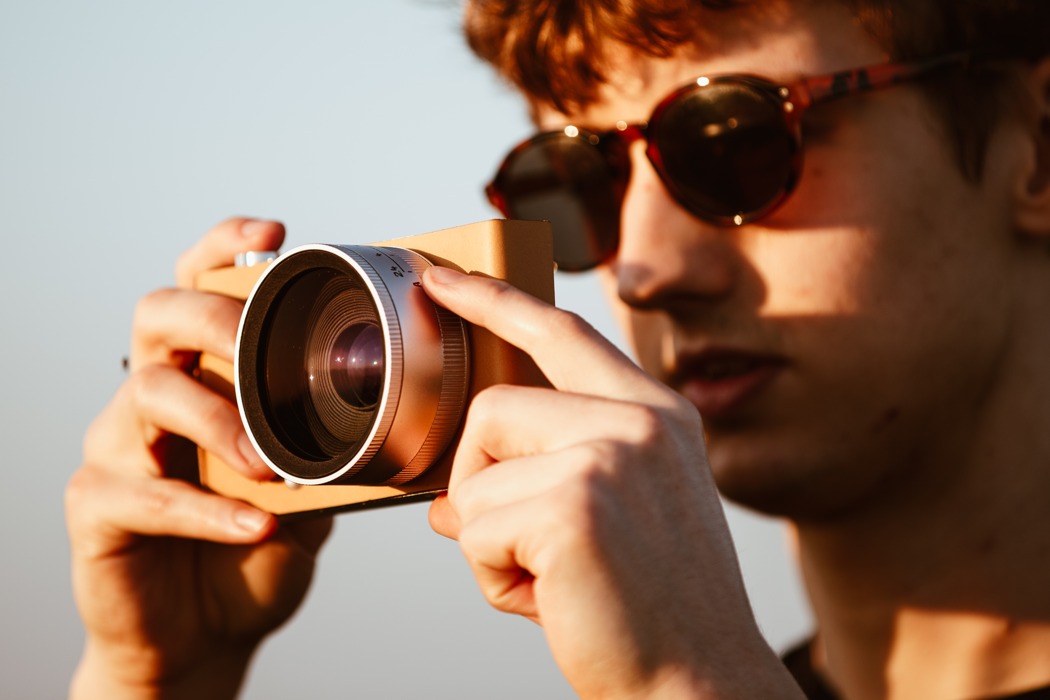 The Note cam was inspired by studying the works of visually impaired fine-art photographers, such as Craig Royal and Pete Eckert, and allows users to capture their perspective of the world, regardless of their sight or knowledge of photography. The design takes on a familiar journal-theme with split halves that are bound by a handsome leather case. The dual displays allow users to make side-by-side comparisons of their work when different settings are applied.

The fixed 35mm has a large aperture, prioritizing soft, dreamlike portraits and macro capability. Combined with the chosen APS-C sensor, the 35mm focal length provides a similar output to the human eye. This gives Note’s photos a more personal touch, as if making up for the user’s impaired vision. The lens’ f-stop markings are engraved rather than painted so they can be felt as well as seen. It also features tactile controls, simplified into 3 dials: power, aperture and shutter speed. The position of each can be determined by touch but the settings are also displayed on the screen and read aloud by a voice-assistant. 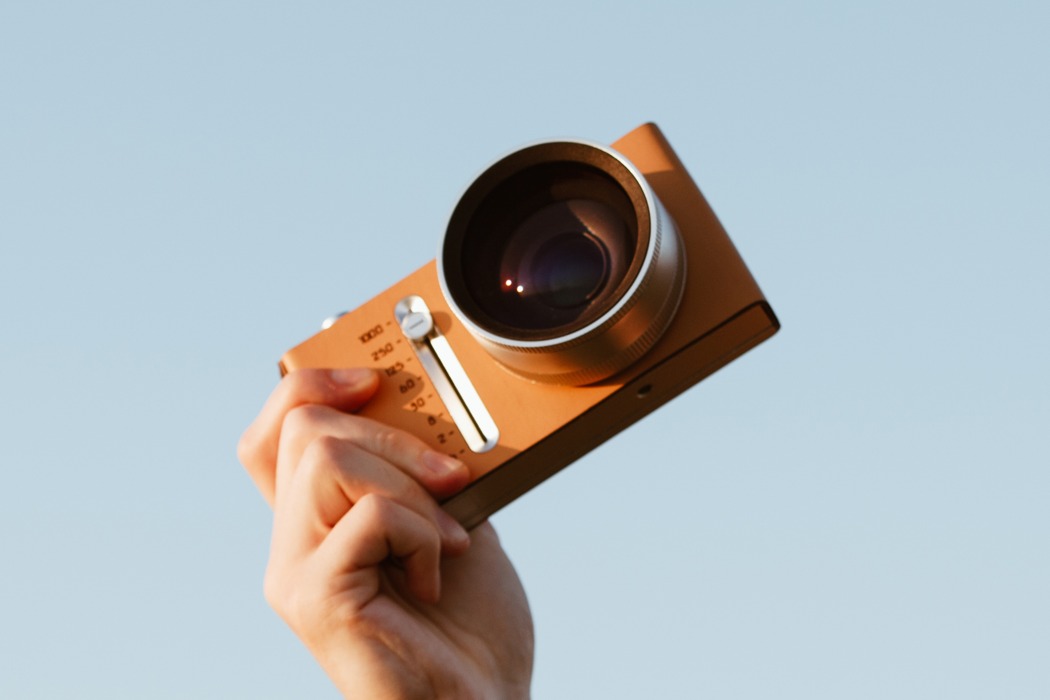 Currently there are over 162 million visually impaired people worldwide but only 4% of these people have no vision. Of those who do have vision, many wrongly assume that they are unable to communicate visually or that they have no desire to do so. Of the very few who have managed to access photography, they have found the experience required great input from others, but provided them with a very positive therapeutic experience. Note is designed to allow everyone to capture their perspective of the world with creativity and control, regardless of their sight or knowledge of photography.

The project’s inspiration came from studying the works of visually impaired fine-art photographers, such as Craig Royal and Pete Eckert, and the initial difficulties they experienced. 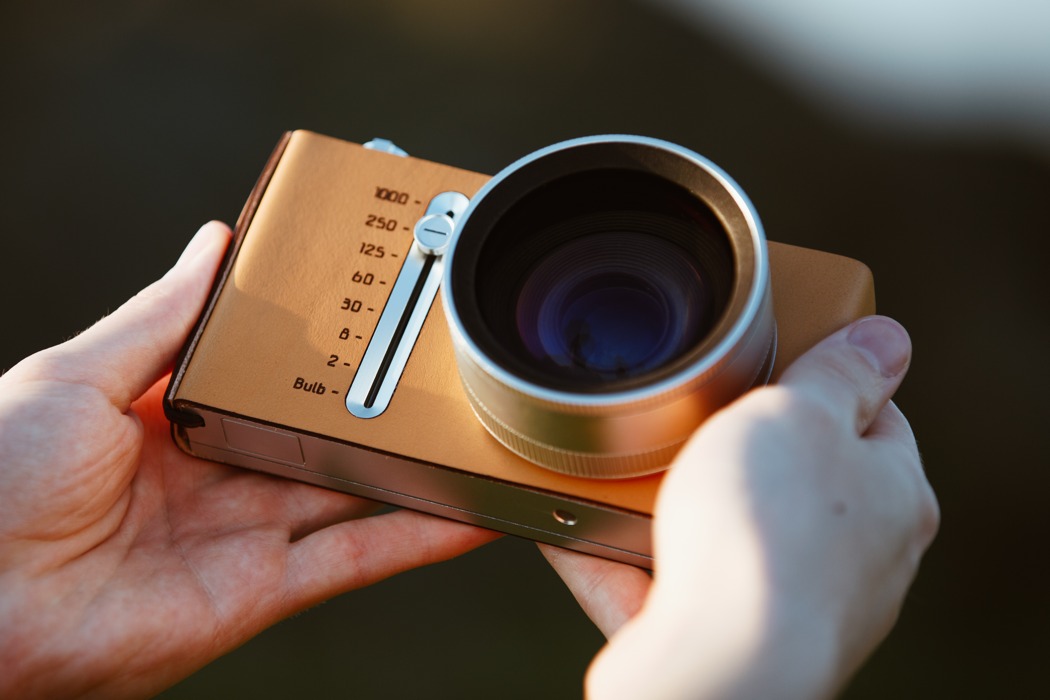 The appearance of Note was inspired by the leather-bound journal; a comforting, familiar object associated with memory and creativity. The camera’s body consists of two aluminum casing halves, seamlessly bound in leather and secured with textured chord. The faces are smooth, interrupted only by the key interaction points. The leather’s edges are exposed at the top and bottom, reaffirming the natural, journal-inspired theme and distancing the product from contemporary electronics.

The fixed 35mm has a large aperture, prioritizing soft, dreamlike portraits and macro capability. Combined with the chosen APS-C sensor, the 35mm focal length provides a similar output to the human eye. This gives Note’s photos a more personal touch, as if making up for the user’s impaired vision. The lens’ f-stop markings are engraved rather than painted, allowing their presence to be felt as well as seen. 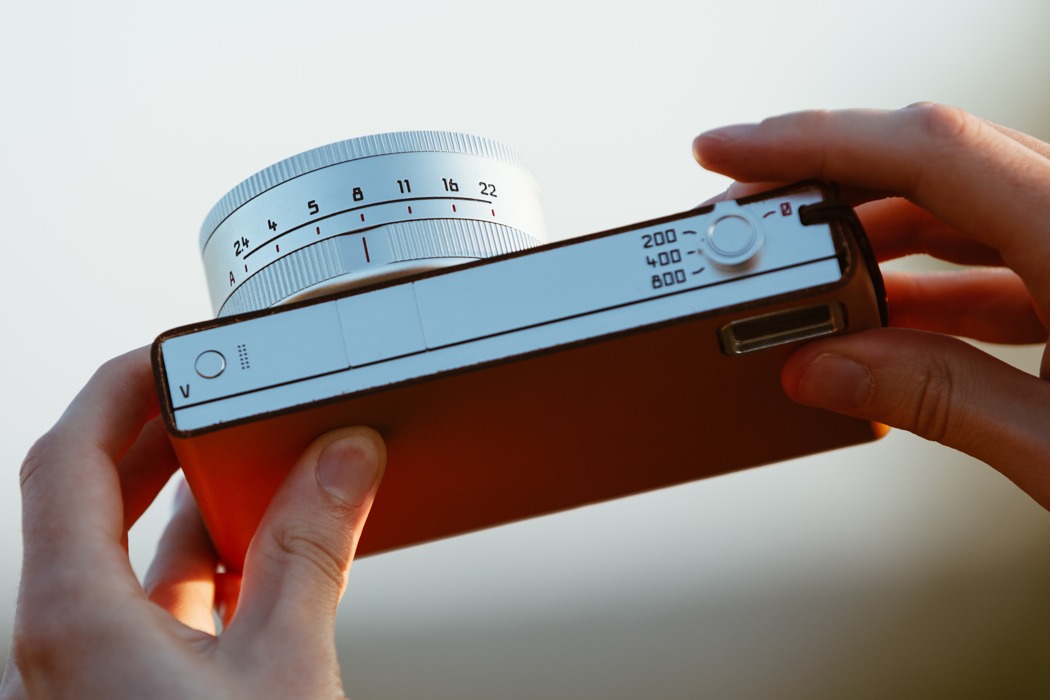 Note’s controls simplify the photographic process to three separate dials. The ISO is combined with the power off, giving the switch four positions: OFF, 200, 400, 800. This switch design forces the user to use best practice and choose the ISO when powering on the device, starting with the lowest first. The aperture control is built into the lens, suggesting it’s mechanical purpose. Shutter speed is the most adjusted function during a shoot and is adjusted by the typewriter-key-inspired slider positioned directly underneath the fingertips of the right hand. The travel and shape of the controls are designed so their position may be gauged by touch. With practice, this allows adjustment of settings using muscle memory, reducing reliance on on-screen UI.

The controls are supplemented by the voice control button and speaker, shown by the engraved ‘V’. A single press gives a verbal readout of the current settings. Holding the button allows voice control of the camera’s key functions. 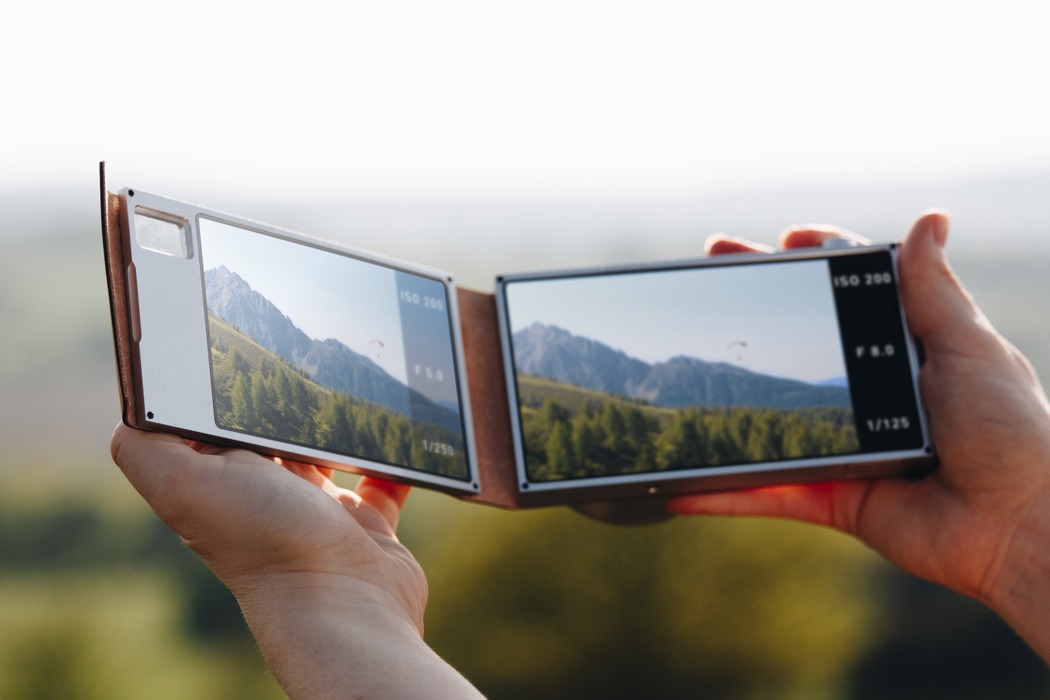 Unfolded, Note’s dual displays are used for comparison between photos. For the visually impaired, the impact of settings on a small single screen can be lost. However, compared side by side, the difference can be more easily observed. On the right, primary display, the photo is shown with user’s settings applied. Alongside, the same photo is shown but automatically adjusted by the camera, revealing the difference in perspective between levels of eyesight. 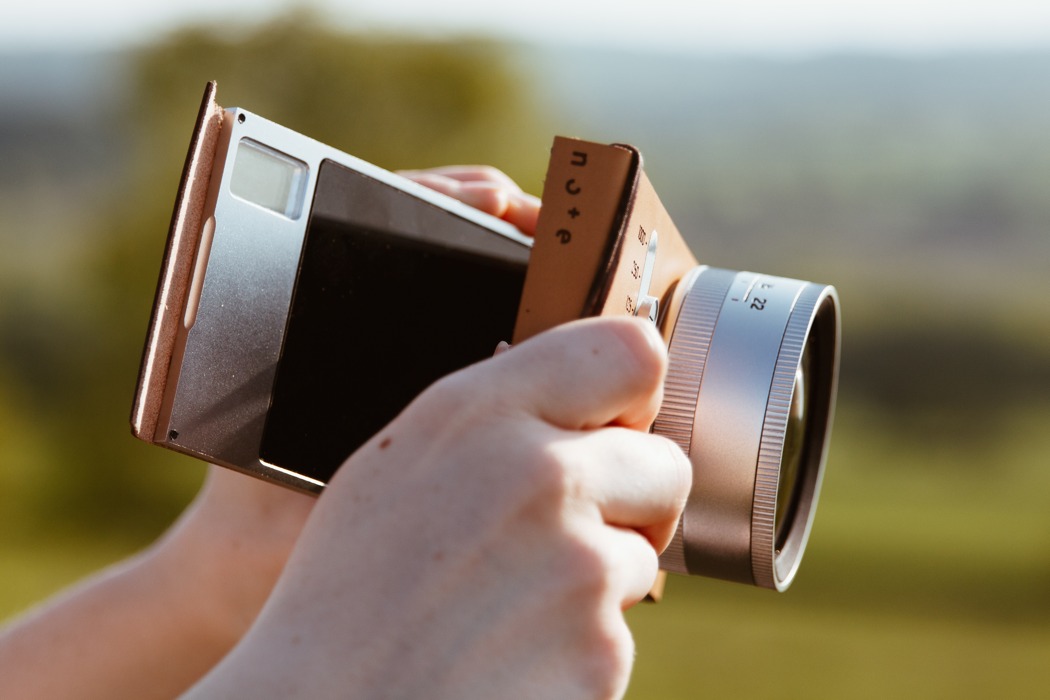 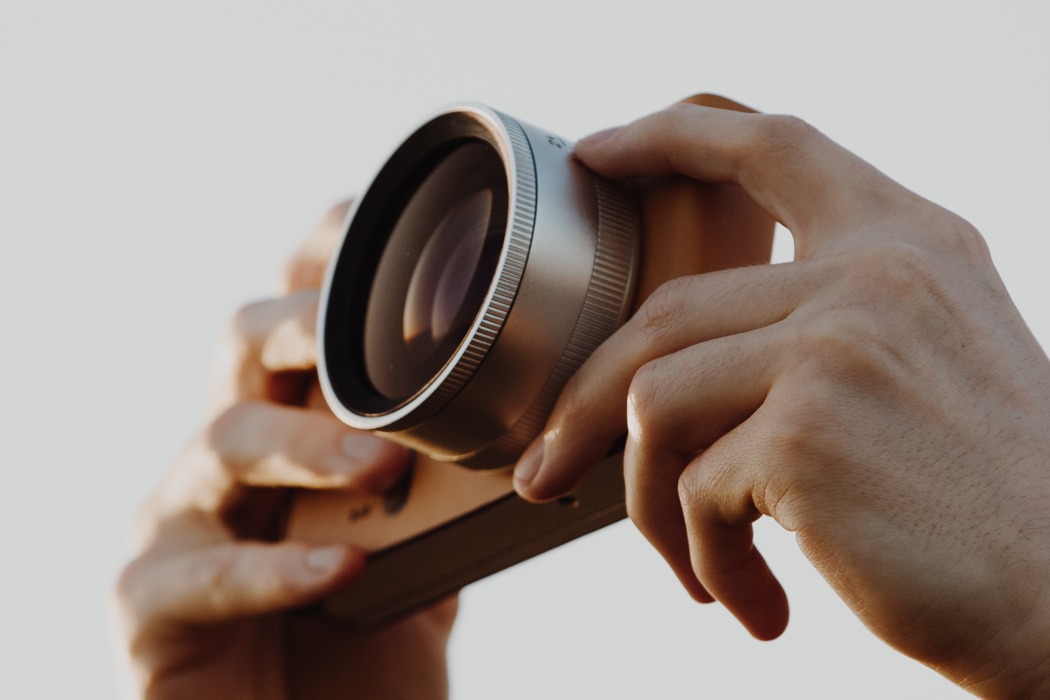 As electronic technology advances to the sub-micron level, it’s hard to imagine what kinds of things will exist in the future. Designer Charles Windlin believes…

Back in May last year I did a roundup of the Most Unconventional Umbrellas seen here on YD. I wish I had stumbled across the…

https://www.kickstarter.com/projects/shiftcam/progrip-a-reassuring-battery-grip-for-all-mobiles This may be the most well-designed smartphone grip we’ve seen in quite a while… They say (and I’ve repeated this multiple times) that the…

Klipsch is challenging European designers to visualize products for their iconic heritage line!

I go on and on about design competitions, but honestly my motivation as an Industrial Designer myself is truly just one simple thing. Seeing my…