Technology maybe overwhelming for most us, but the future generation is so with it! They have the hang of ever little new gadget and gizmo that comes our way. Which brings me to robots; I can’t fathom the need of an electronic being to do chores for us. I can understand their presence in the medical and industrial arenas; but Irona suits Richie Rich the best. However looking at the current crop, I think it’s best to compile a list of Ten Robots that they never knew they wanted. 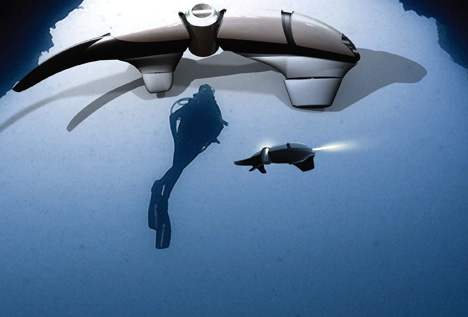 So you are in the middle of the Great Barrier Reef, enjoying the corals and the fishes, but one steady fish that won’t leave your side is the Amphibia. Constructed primarily of neoprene and hard plastic, this salamander like robot is quite adept in both land and water. The center pivot axle for the 1.2-meter long robot contains an oxygen tank; it also features radar eyes, flood lights, electromagnetic wave emitters for warding off sharks. The beauty of course its communication features, the entire surface is able to change color to transmit one of the eight basic diving signals, such as OK, danger, resurface, etc. 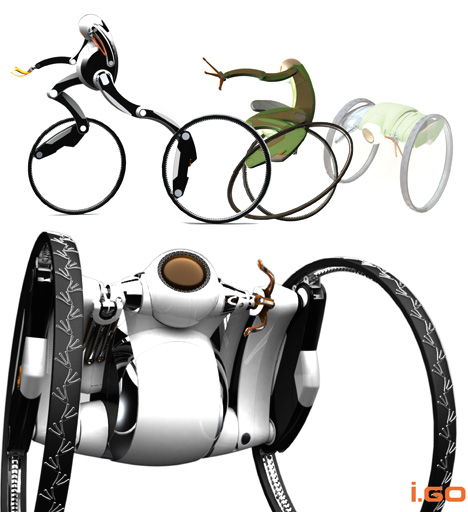 When the current crop grows old we parents are not gonna be around, and since they are so dependent on technology, this one’s for them. i.go is a foldable robot with a frog-like/human-like look. It’s supposed to help the oldies in their everyday tasks like going to the grocery store to pick up their stuff. Don’t scorn yet dears; in the future all this WILL be possible! Spec-wise this baby is 95 cm wide and 75 cm high, and it can independently transport goods weighing up to 30 kg at a speed of 50 km/h. At home the folks can unfold i.go’s backrest support and use it as a rocking chair. An innovative feature is that it can automatically reshape its wheels to elliptical, so as to reach up to goods that are placed up to two meters above the ground level. 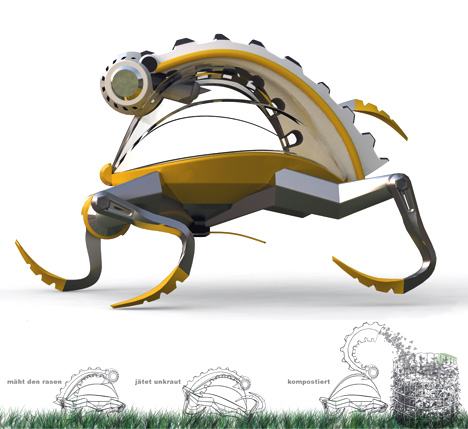 Lazy future generation is gonna need a robotic weeder for their gardens! Botan suits this purpose perfectly; it removes weeds, trims the grass, and vacuums up leaves. Thanks to its integrated e-bug function, it localizes pests and either eliminates them or signals their position. No more garden worries in the future. 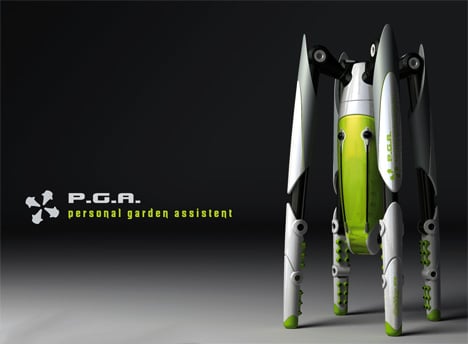 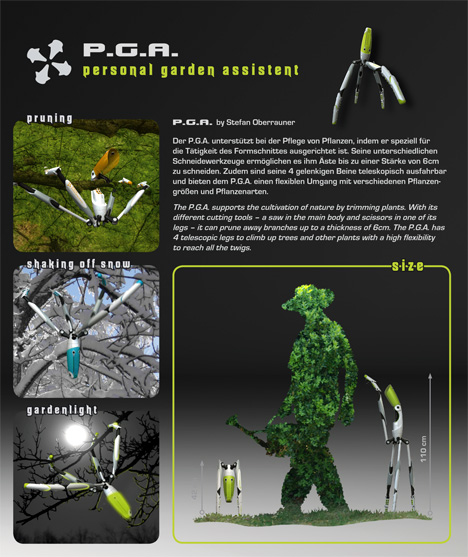 At this rate gardeners could become an extinct species in the future. With P.G.A. to tend to your lawns who; would hire humans? Specs on this robo read 4 telescopic legs to climb up trees and other plants with a high flexibility to reach all the twigs; a saw in the main body and scissors in one of its legs; and finally the ability to prune branches that are 6 cm thick.

Guide dogs are in danger as well coz their robotic counterparts will soon replace them. Blind folks will depend on Gio to paint the town red. Like a futuristic navi-system, it can rattle off the POI plus give all info on the shops available in that area. The perfect guide or perhaps an escort! 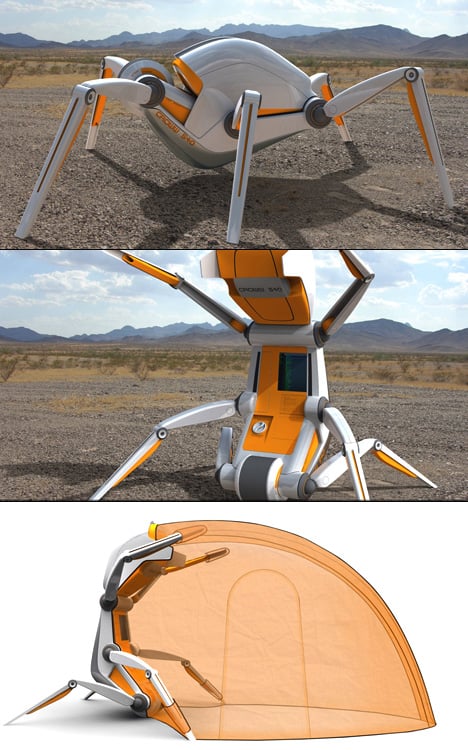 Christopher is very specific about the era that his robotic invention is envisioned for. The year is 2057, and we have been banished to fate of crossing hostile, difficult areas, such as deserts, ice- planes and rock-masses on foot due to our bad karmas. To accompany us on the journey is the croww 540. An autonomous attendant robot system that carries your luggage, equipment and drinking water; it even fans out a tent, when you need to rest a bit. 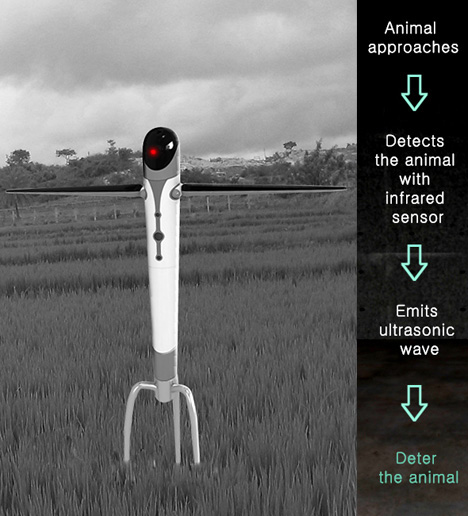 I don’t know how they do this in other countries, but back home in rural India, women usually plant a scarecrow made from an earthen pot, shirt and hay. They paint a silly face on the pot and use sticks to hold it in place like a head. Silly them! A robotic Digital Scarecrow is the way to go! 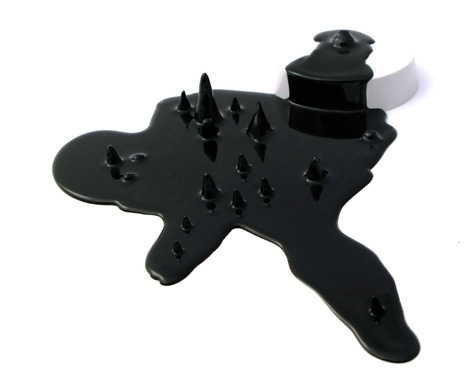 This has to be the most creative farce of the lot! Future is so busy, gonna need a palm full of goop to help me stay in touch with my social sites like Facebook! “A virtual robot makes and keeps new contacts for you by taking over your virtual identity. Your only control over its decisions is through an interface representing the network itself : a black liquid surface covered by numerous spikes that stand for each of your “friends”. It is by altering the surface of this « liquid », that one can interact with the robot and influence his actions in the virtual world.”
Crazy, crazy future! And we’re gonna need this! 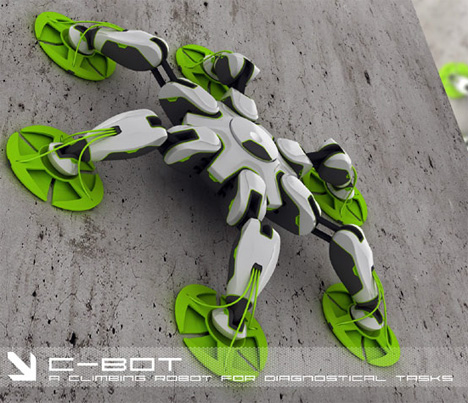 Climbing scaffoldings to check cracks and damage to the exterior of a building is not quite a fun job to do. C-Bot will be able to perform this task efficiently thanks to its innovative structure and built. This is one manual work that I don’t mind robots replacing. 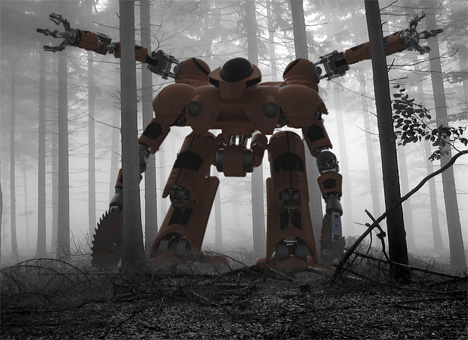 Every year lives and millions of dollars are lost due to for forest fires, but hopefully some respite is expected in the form of the Forest Fire Prevention Robot. It’s been devised to clear large areas of foliage from around a forest fire to help stop the flames from spreading.

I hope you enjoyed this compilation as much I did making it for you. My point for this whole list is that although we don’t know it yet, but innovations in robotics can help make life easy for us in many ways in the future. All we gotto do is keep an open mind.

MIT researchers have reinvented the fabrication technique behind micro-robots so they can operate with lower voltage while carrying more payload. As researchers at MIT put…