This is the story of one product evolution from idea, through design, prototype and finally production. You might notice how the idea came, how the initial design was flawed but then solved in prototype. The path from idea to reality is full of branches, some in market position, some in design detail and others in production. I hope you enjoy this story of the little trailer that almost did.

In the process of walking around the InterBike, trade show I happened upon a booth selling bicycle trailers. These trailers are used for hauling children or cargo, I was surprised at how primitive they were and the high price they were getting. These current units were bent alloy tube and tent fabric giving lightweight but no structure and an appearance of a tent on wheels. I talked to a few people and learned that they were selling a lot of them and the market was growing so I decided that this might be a good market to look into.

I borrowed an existing unit from a local dealer, did an analysis of it as well as some testing, and came up with some key features that I felt would provide some real benefits. The use of suspension was a hot button in bicycling then as now and I knew from racing sports cars that an unsuspended vehicle was not only uncomfortable for the passenger but also less stable. I did a simple test with the borrowed unit loading it to the weight of one child and running over a 2×4 to simulate a pothole or rock in the roadway. The result was even more impressive than expected; the trailer wheel jumped up a full 6 inches off the ground and if the pothole were hit during, a turn would cause the trailer and child to flip over. I knew that a 2 inch deep pot hole was not that uncommon even in the city and given that the trailer wheels were outside of the path the bicycle the rider may not even notice one coming up and avoid it.

I decided to develop a simple adjustable suspension system for the bicycle trailer with safety and comfort as the key consumer benefits. After looking at and experimenting with a number of systems I decided on a simple trailing arm axle with three elastrometric bands on an arm for the suspension medium and adjustment. This suspension system drove the rest of the product design with its vacuumed formed hull giving better seating and safety as well as fully enclosed wheels. The prototype was built and the initial testing proceeded to validate the safety and comfort aspects. In testing not only would the trailer stay stable and not tip even when encountering a 6 inch deep pot hole but the ride was so comfortable that younger children tended to fall asleep while being towed, something that did not happen in the other trailers.

In trial use, other features that could be added made themselves apparent.  One of the purported uses of the bike trailers was to go some place with the children and then do something else, like go to the store or park. It was obvious that with my design the inclusion of a caster font wheel would in effect make the trailer a stroller when uncoupled from the bike. This gave far more utility and prevented the bike trailer from being stolen when the riders were away. This added feature required engineering of a new type of universal bicycle attachment that facilitated easy decoupling. This was accomplished in due course with out violating any existing patents and tested. The test group really liked the new features and benefits as well as the automotive look of the product that exuded higher value. The perception was it was safer for the child and much more user friendly for the parents.

After considering, approaching the existing trailer companies and factoring in the new design utilized very different production methods I decided to sell the license to the product to a startup company for a royalty and license fee with the agreement that I would bring the product to market for them. This proceeded well even though I had misgivings as to their ability to garner sufficient capital to execute the project properly.

The production design began with some modifications to the original design to allow for easy vacuum forming of the product and higher usability of the top. The new top had not only a windscreen but also a bug screen that could be quickly attached as well as a transparent rain cover. This high visibility not only kept the children happy but also gave piece of mind to the parent who could look back and see their child. Production development was almost complete when we decided that we could offer as an option a “jogger” package. This package consisted of a plug in push bar and a plug in 16” front wheel with hand brake supplanting the small castor wheel. The product was now complete and production prototypes were built and readied for the InterBike trade show. The production unit had these features and benefits.

The Alfa trailer was judged to be one of the top 10 most innovative products of the 1993 InterBike trade show and we had many dealers signing up, later the Alfa was also the only bike trailer to be approved for use on public roads in Germany.

Production problems ensued compounded by the inexperience of the startup company and their under capitalization. The problems were compounded when the licensing company in violation of its contract with me did not proceed with patent protection allowing competitors to replicate key features into their own products. The net effect was the company folded but many of the key features pioneered by the Alfa are on bicycle trailers to this day, the stroller ability, hard shell body, panoramic view, and suspension and jogger conversion. 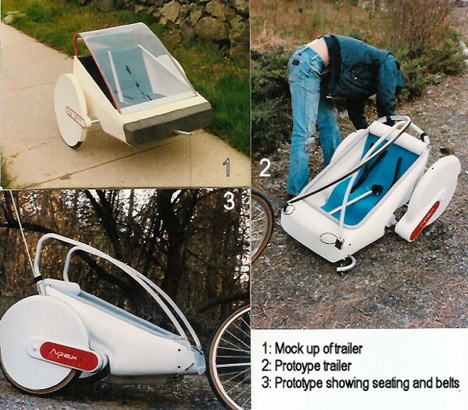 The following pictures show the evolution of the Alfa from foam core mock up through the final production units as delivered worldwide. 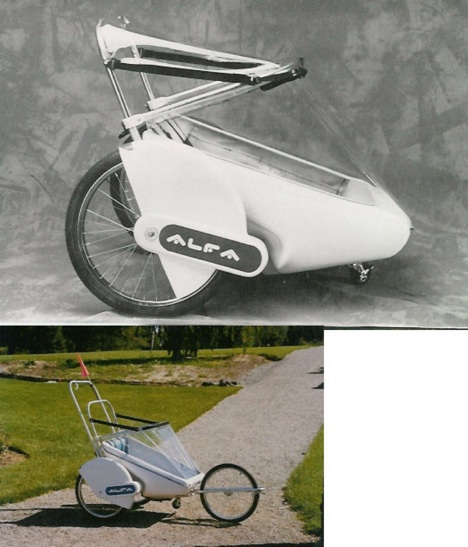 I read a pretty scary statistic online, which outlines that the average person stares at their smartphone screen for a minimum of 3 hours a…

Tiny homes make a big impact but have even bigger challenges

When it comes to houses, there are two things that would stop people dead in their tracks. One is a large and majestic masterpiece built…

I’m really tempted to buy a new iPhone, and that’s something Apple manages to pull off each year. With great features, cross-compatibility, better cameras, and…