Have you ever heard someone say that they would love to learn to paint and create beautiful art, but have no clue about mixing colors or what brush creates which effect? Maybe you are one of those people who would like to get more in touch with your inner artist. Canadian designer Yana Kilmava has developed a conceptual product that would help the novice artist have more confidence in learning how to paint. Virtuo looks very similar to the traditional paint pallets used by artists for hundreds of years, with the added bonus of modern technology. There are no wasted paints, no confusing mixing of colors and you don’t have to be an experienced artist to create really beautiful pieces of artwork. Virtuo includes an art pallet, a charger, 5 different art tools and works by electromagnetism so no worry about quick battery loss. Even though it was designed with the inexperienced artist in mind, Virtuo can also be used by the more professional digital artists who are also experienced in the traditional forms of creating art. At the present time, Virtuo is only in concept form, but I can hope that it is made available to the public sometime in the near future. 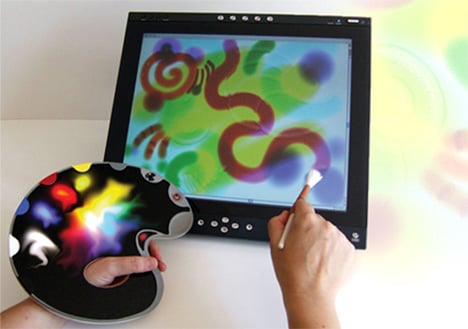 The palette uses Bluetooth technology for communicating with the computer.
It mimics real paint mixture techniques with LED lights. The user can also mix
dark colours due to the special coating on the palette’s surface. The amount of
paint “picked up” by the tool is determined by the amount of time the tool
spends on the mixed colour.

The tools, consisting of a pencil, paintbrush, palette knife, airbrush and pastel,
use sensors to translate the user’s gestures into visual information. Taking a
palette knife as an example, it would use pressure and accelerometer sensors to
translate its position and pressure on the screen into an appropriate stroke.

Virtuo comes with software that is based on the real painting process: minimal,
leaving the user free to experiment. Most of the time it would look like a blank
piece of canvas, with a simple drop down menu showing only when the user
wants to start a new digital painting, save, close it or open a previously started
one. The really cool thing about this software is that it would treat all the digital
materials used on the canvas as real ones. Ex. You would not be able to erase paint,
only paint over it. It would also have only a limited number of “undo” steps to
encourage the insecure user to practice by correcting rather than erasing. 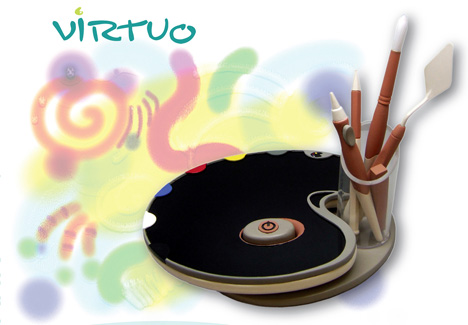 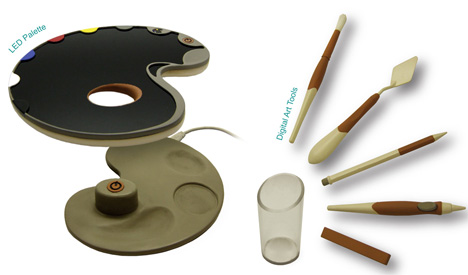 This Phone Gives the User Their Life Back!

The primary function of being a mobile phone is… well, to be a phone! However, integrated into the smartphones of today is a plethora of…

The Mai table is a 90s throwback with a familiar shape that’s a continuation of the Peacock vase project. Made of solid beech wood, the…

Go!SCAN 3D is the latest innovation in white light 3D scanning; promising to be the easiest and fastest 3D scanning experience ever. The scanner comes…

What Smart-plug Does Bruce Lee Use?

Zuli! Shamelessly bad humor aside, the Zuli does one simple thing that we’ve secretly hoped for since time immemorial. Allowing you to switch on/off appliances…