According to a recent press release we obtained, Poland is having an economic up-swing and what better time to launch a brand new entertainment multi-plex space than now. “Multikino” theatres in Warsaw, Poland is being billed as the “most spectacular and stylish CINEMA IN EUROPE!” I have not been to every single theatre in Europe so I will have to take their word for it. Brimming with lush velvet, shiny chrome, rich colors and just screaming bling, this cinematic show stopper was designed by Robert Majkut’s Design Studio. 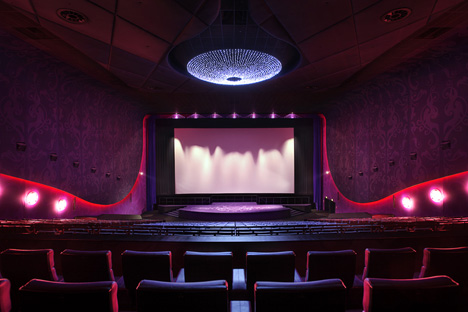 The Premiere Hall has an air of splendid theatre and opera auditoria. It features numerous decorative elements, ornaments, and wall lighting details. For convenience, special comfortable seats have been placed in the hall, upholstered with cosy fabrics, and in the VIP-zone they are covered with genuine purple leather. The entire hall, although very modern, alludes by its colour scheme to the tradition of grand theatre and opera auditoria, which is exemplified by an impressive six-metre chandelier made using a state-of-the-art LED technology. 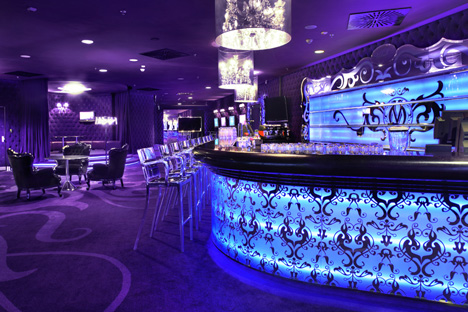 Both in the upper part of the Premiere Hall and in the first storey connected to the Premiere Hall, there is a VIP-zone called the ‘Velvet Bar’. It includes a distinctive long bar and a separate stage – to be used both for music performances and as a separate bay with mobile seats. For a total convenience, the VIP zone has its own cloakroom and toilets. The monochromatic black and purple interior, walls covered in a quilted plush fabric, mirrors, black stone, and spectacular lighting determine the extraordinary, luxury and stylish climate of the place, which is designed in a special way and takes the reception of film art to the highest global standards. This place aspires to be a meeting venue not just for sophisticated film lovers, but also for the creators and participants of film art. 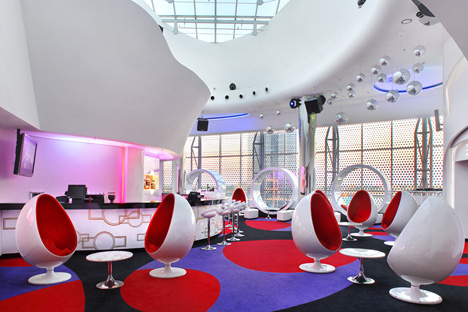 The top level, with a bar and 4 auditoria, is the so-called “35 mm” music club, with a separate DJ booth, a bar and a restaurant zone. It is a place to rest, relax or organise invitation-only events. Its design is different than that of the whole complex. It is strongly illuminated by a giant window and a huge oval skylight in the ceiling. It surrenders to sunlight with its light-coloured, almost white decor, white furniture, sofas and armchairs. This place is special in its dissimilarity to the remaining part of the design, being in opposition to it – a fresh breath. Owing to its functional identity and rearrangement possibilities, it is a perfect place to hold private events, meetings, or – in combination with the auditoria – reviews, private showings, or film marathons. 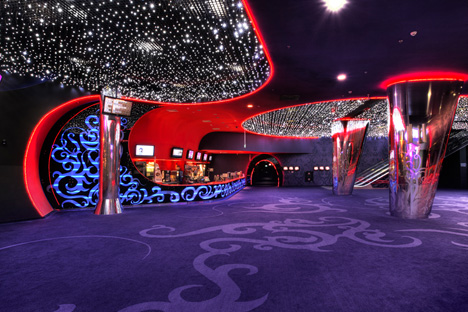 No need for the “napkin sketch”… now you can draw right on the table. The Chalkboard Table has a chalkboard top surface, allowing for creative…

One of the top entrants in this year’s Electrolux design contest is the Kitchen Drawer. Designed for the internet generation – you know the type,…

This low-country tiny cottage embraces rustic minimalism for the ideal winter escape in the marshlands!

Low Country is a tiny home located in Lake Glenville, North Carolina that infuses touches of minimalism with rustic outfittings for a luxurious and cozy…