This lamp forms part of the new collection of objects created by studio eos mexico. New technologies, shapes and materials are used in this collection. A ludic touch always appears in the work of eos mexico. This lamp was created for remember this American inventor and businessman who developed many devices which greatly influenced life worldwide into the 21st century. He was the one who made the fine tuning to the first inventions of electrical bulbs. He concentrated on commercial application and was able to sell the concept to homes and businesses by mass-producing relatively long-lasting light bulbs and creating a complete system for the generation and distribution of electricity. He made the first electrical network in 1878. After this, he said, “We will make electricity so cheap that only the rich will burn candles.” 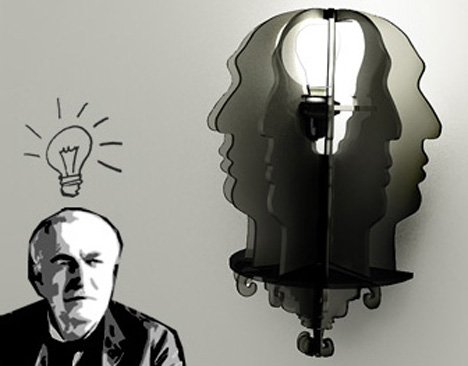 This nostalgic Walkman inspired Bluetooth speaker uses your smartphone as the cassette!

Design at its core has always been the exploration of spacial reference that may bring harmony or solutions to problems. The Dialogue/Monologue concept takes it a…

The SplitLamp has the noble intention of adjusting to illuminate the part of the desk that you so require. You can adjust the angle of the…

Cozier on the inside!

The KUBE home has a strangely rigid vibe. Appropriately named, it looks like a clean cut cube on the outside. However the inside tells a completely…

A frame serves as a fastener for three food dishes, which can then be safety transported to the desired location. Using Ready-to-Eat, you can eat whenever…