Created for the “Design From Home” kind of folks, Snapmaker’s all-in-one prototyping rigs are modular, customizable, and size-fluid, going from a small tabletop accessory to a state-of-the-art fabrication lab right on your desk. The company is celebrating 5 years in the business with major Black Friday discounts on its latest products – the Snapmaker 2.0 AT models and Snapmaker 2.0 F models. 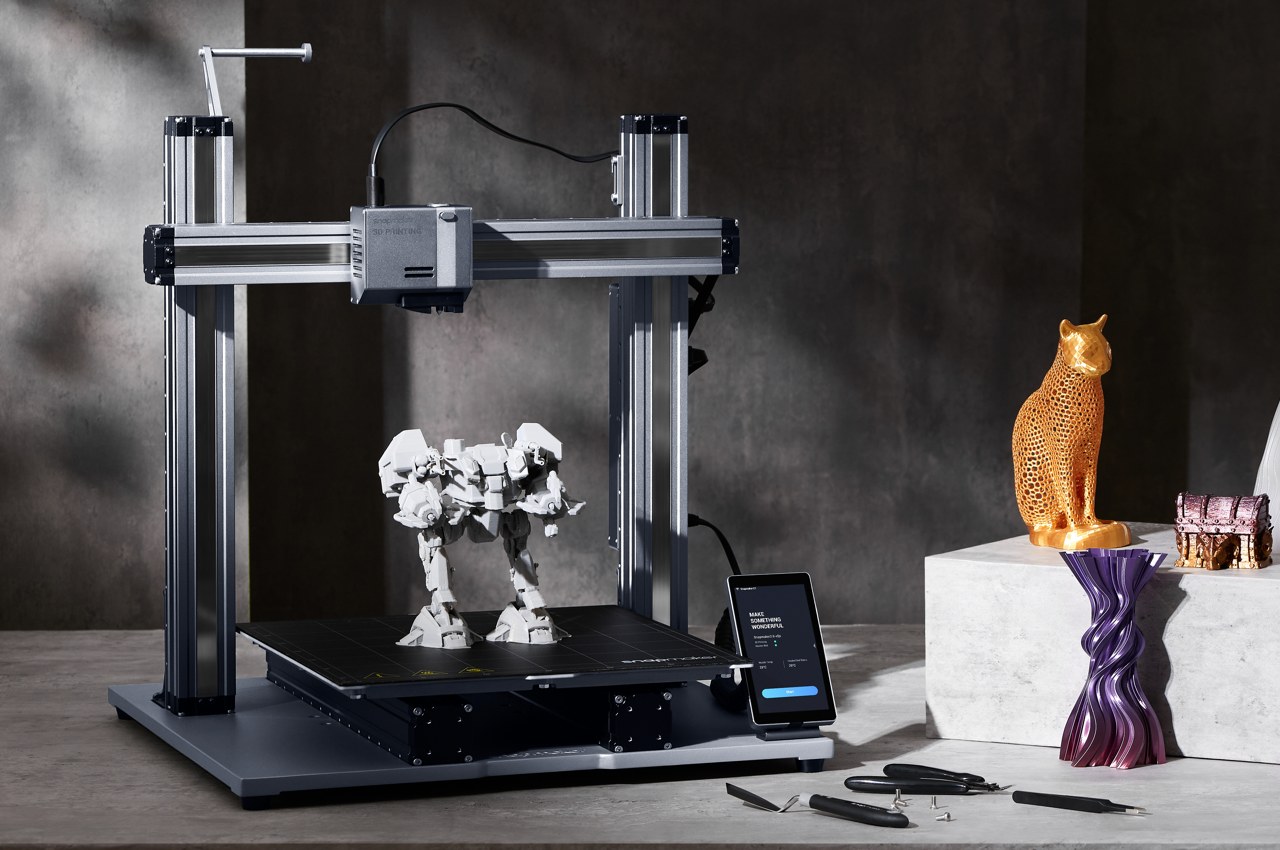 Unveiled at their 5th year anniversary, the company’s two upgraded models, the Snapmaker 2.0 AT and Snapmaker 2.0F build on their successful 2.0 line. The Snapmaker 2.0 AT adds refinements to the 2.0 and can either be bought as a standalone prototyping unit, or as a series of upgrades that you can plug into your existing Snapmaker 2.0, which already lets you do 3D Printing, Laser Engraving/Cutting, CNC carving, and even 4 Axis CNC Machining with the help of its Rotary Module. For people looking for a device that just handles 3D printing, the new Snapmaker 2.0 F isn’t a jack of all trades like the other models, but for less than $1,000, it gives you an expandable, modular 3D printer that’s reliably accurate, and is made entirely from metal for the most precise printing experience ever. 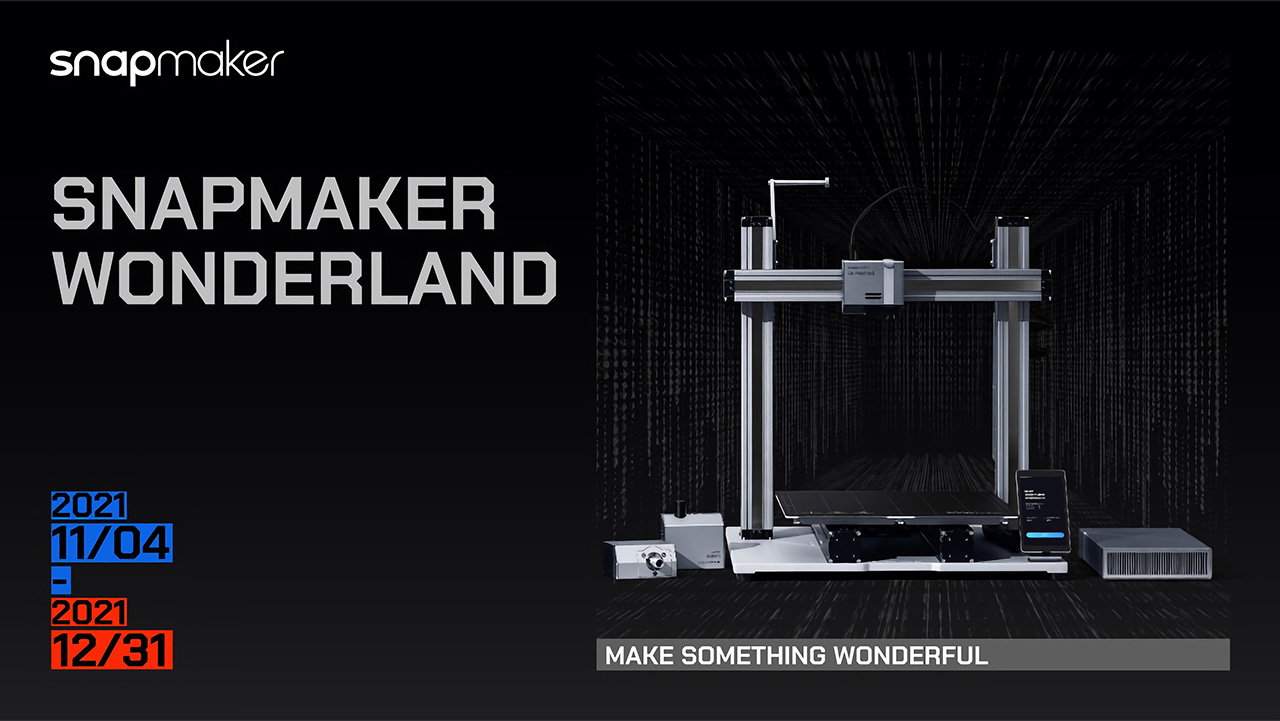 Along with the anniversary, Snapmaker also hosted ‘Welcome to Snapmaker Wonderland’, a virtual event referencing the Wonderland that Morpheus talked about while presenting Neo with the Red Pill. The event highlighted the Snapmaker machines’ ability to unleash the mind’s true potential, by letting creators build practically anything they wanted. In a world transitioning heavily towards a ‘Metaverse’, the Snapmakers firmly root you in the physical world, allowing creators to build, experiment, problem-solve, and turn ideas into products, products into businesses, and digital/conceptual dreams into physical realities. 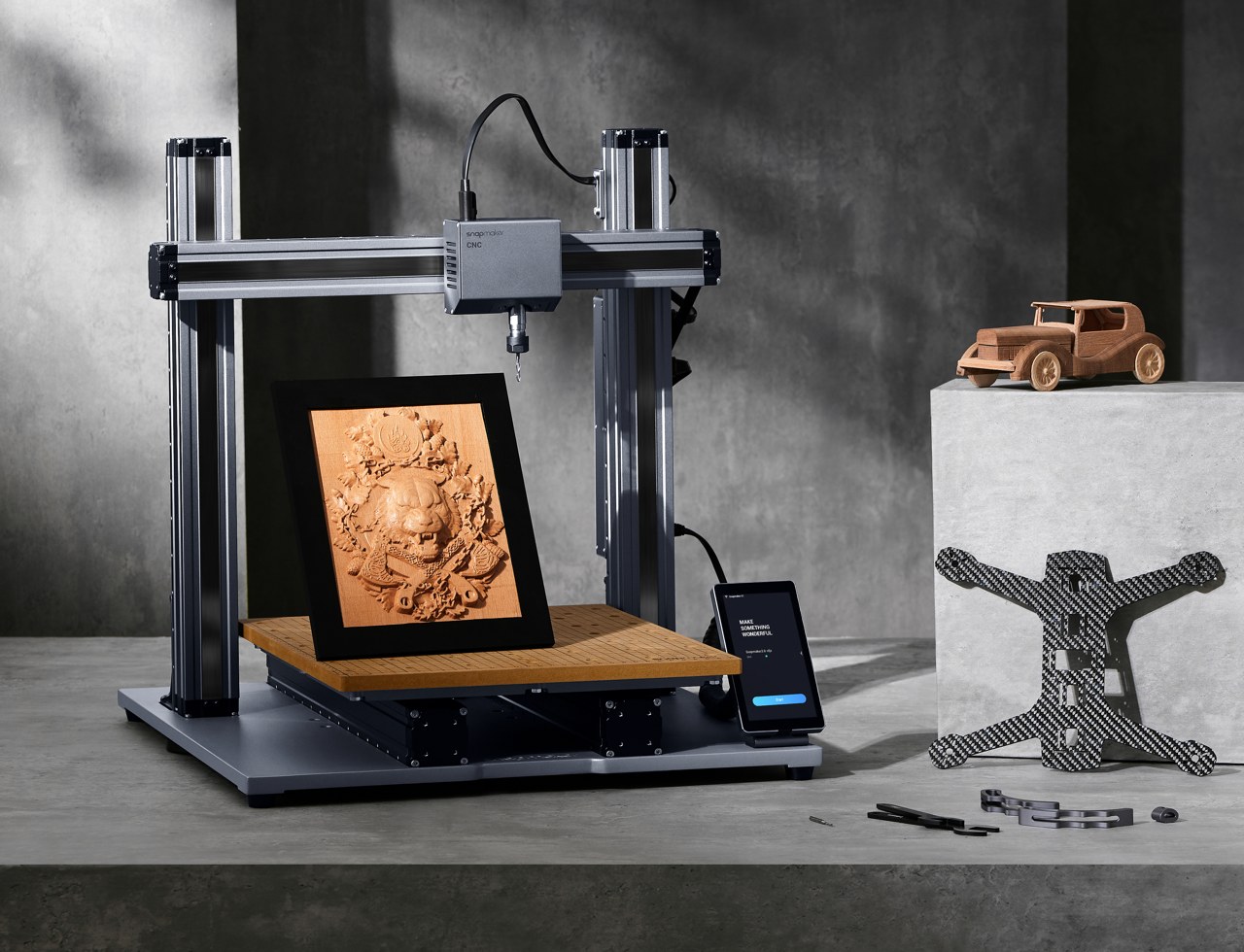 The highlight of Snapmaker’s fabrication machines is their ability to let you alternate between a 3D printer, a laser-engraver, a CNC carver, or even a 4-axis CNC lathe machine simply by swapping and plugging modules. Just like the Snapmaker 2.0, the upgraded modules boast of a customizable assembly that lets you build exactly the fabricating tool you need, allowing you to expand or scale it down based on the size of your operation or your workspace, add a protective enclosure, or even addons like an IP Camera or an emergency kill-switch. 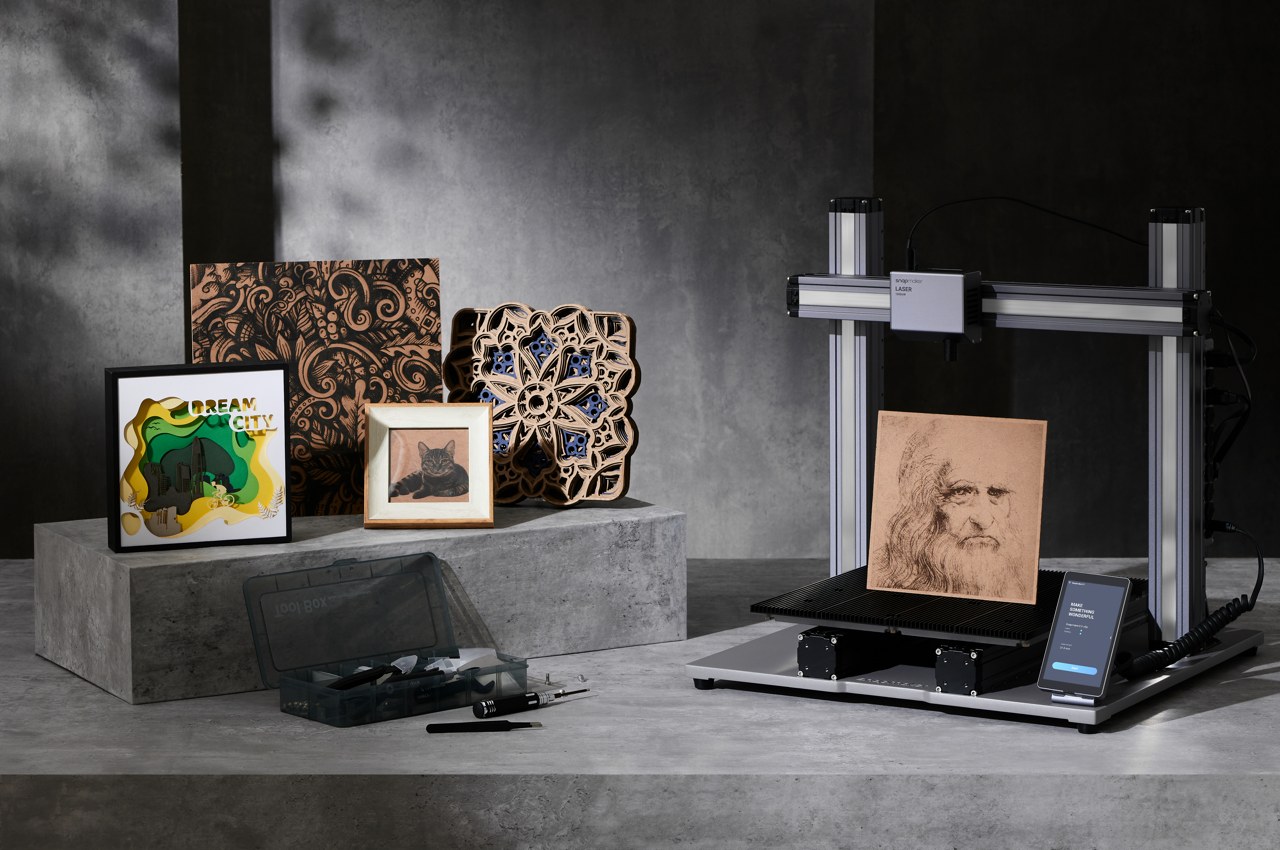 Let’s start with the Snapmaker 2.0 AT, revealed just a month ago at the company’s 5th anniversary. Bringing important upgrades to the already capable machine, the 2.0 AT adds an improved power module with a noise-reduction chip, and a new linear module that collectively allow the machine to operate at up to 16 decibels quieter than its predecessor. It also features a new 3D printing module with an upgraded cooling system, quick-release hot end mechanism, and improved extrusion components to elevate the printing efficiency and consistency. Compared to older models, the AT models (and even the 3D-printing F models) can achieve the same printing quality at a faster speed thanks to the optimization of the cooling system along with a fine-tuned motion controlling algorithm. The Snapmaker 2.0 AT comes as a standalone set with its signature modular design, although for creative professionals who already use the 2020 Snapmaker 2.0, the company is making the upgrades available to older machines by simply letting users swap out components to upgrade their rigs.

For people focused heavily on 3D Printing, Snapmaker unveiled the 2.0 F, a dedicated 3D printing machine that’s still open to upgrades and size expansions in any direction, letting you create a machine that works for your prototyping demands. The Snapmaker 2.0 F also boasts of the same quiet operation as the 2.0 AT, with improved power, 3D printing, and linear modules. Priced at $999, the Snapmaker 2.0 F lets you practically assemble your own 3D printing station for the price of a smartphone… and then print out smartphone cases too! If at any point of time you want to upgrade your 3D printer to include CNC machining, laser engraving, or 4-axis milling operations, all of Snapmaker 2.0’s modules plug right into the 2.0 F model, letting you easily expand your arsenal whenever you choose. 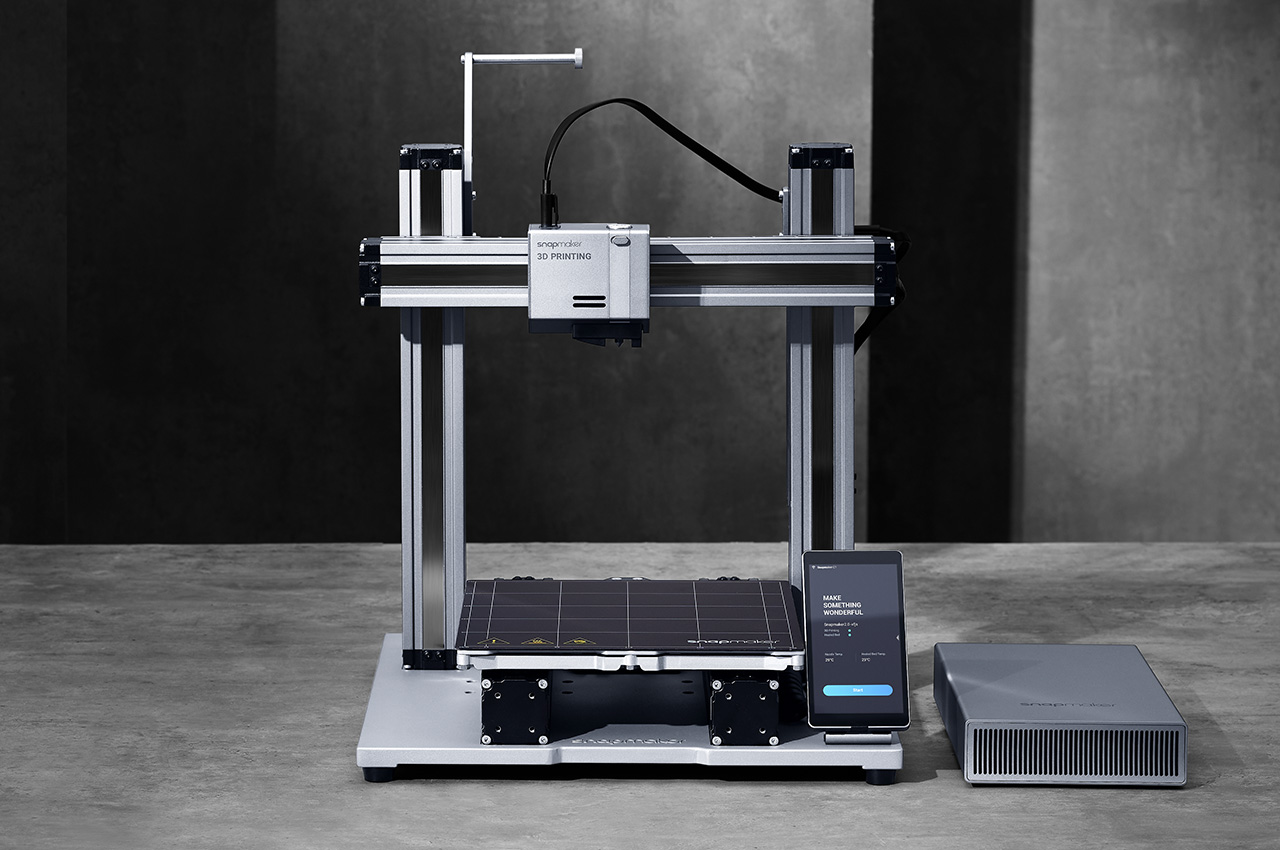 All of Snapmaker’s components come precisely machined from an anodized aluminum alloy, giving you a device that’s as robust as it is accurate. The machined components boast incredibly low tolerances, resulting in precise outputs, and Snapmaker’s own firmware like its automatic bed leveling system, or its intuitive software, the Snapmaker Luban, is easy to learn/use and work exceedingly well at allowing both novices and seasoned professionals to get the best out of their fabrication tools. Snapmaker is running site-wide discounts on its products, accessories, and even on its newest models. You can snag the Snapmaker 2.0 AT and 2.0 F at discounted rates, and even use the coupon code BYD100 for a further $100 off on orders above $1100. As a bonus, you’ll also get to join the wheel of fortune to win free coupon codes up to $599! Go ahead and build your own production line in your home… or better still, design your own holiday gifts!

https://www.kickstarter.com/projects/1683805836/tempmi-the-worlds-smallest-tritium-keychain-thermometer I don’t own a thermometer. I know I should, but somehow it hurts my pride because I’d rather just not get sick instead. Here’s…

EDC designed to become the must-have everyday essentials that you won’t be able to do without!

Cast your mind back two years to the release of the Whiskey Wedge by Corkcicle – every whiskey lover’s dream. The design of the Whiskey…

There are so many objects that rarely see any design intervention because they “are just fine the way they are”. A designer with a keen…