I’ve had this interview for months but could never come up with a title and so I pushed it to the back of my desk waiting for that one moment all us designers get… sudden inspiration. But time’s a ticking and the stunningly handsome Joe Doucet deserves better so hit the jump for my interview with this award-winning American designer. He’s worked with Braun, Target, Samsung and recently just launched WhyteLabel – a bespoke line of affordable furniture. Today’s also a chance for you to “get some” from FAB at amazing discounts. 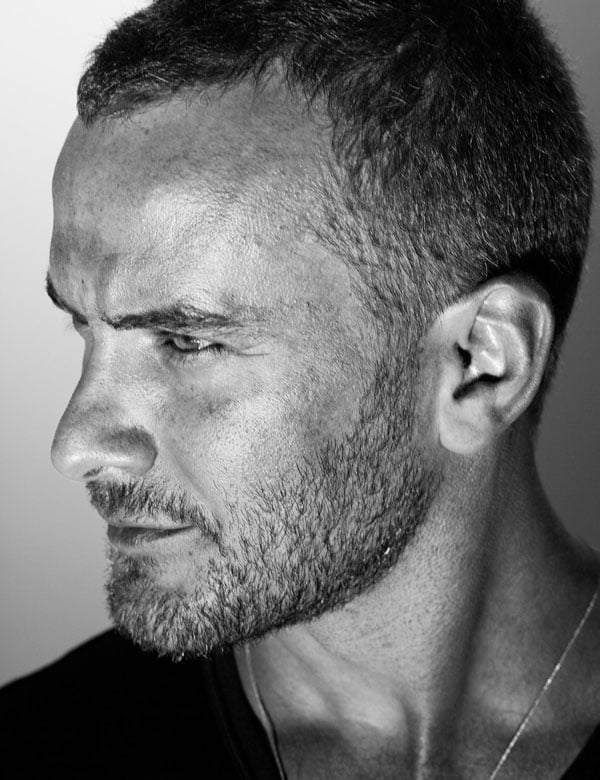 Q: What’s your full name and where do you live?
A: My name is Joe Doucet. Most people think Joe is short for Joseph, but not in my case. There is a very working man’s honesty to the name I have grown to love over the years, although as a child I would have rather been called anything else. I live in the West Village in New York. I recently renovated an old stone house, built in 1730 upstate. It’s on about 10 heavily wooded acres with an old work shop, so most weekends are spent there as too much of Manhattan can take the life from you.

Q: Where were you born and raised?
A: I was born in Houston, TX but really grew up outside of a rural town in Texas called Terrell.

Q: What kind of environment did you grow up in? What did your parents do?
A: My parents divorced when I was quite young. As a result, we moved around quite a bit until we settled in Terrell when I was about 13. I lived with my mother who would, despite the impermanence of our living situation, always put so much energy into creating a beautiful environment. Every wall and cupboard in each room seemed to be occupied by some object or decoration. I think it was her way of creating stability for herself and for her children.

I spent the summers with my father. He, like his father before him was an ironworker. Building bridges, buildings and power plants. He would occasionally take me along for the day. I remember being so impressed that when people set their minds to it, from nothing such immense structures could arise.

Q: What did you want to grow up to be as a kid?
A: I wanted to be an Artist with a capital “A”. However, my maternal grandfather was an engineer. I used to devise so many fantastical concepts such as flying aircraft carriers. He would spend a lot of time picking apart the flaws in my concepts. As an 8 or 9 year old I would go to the library and do research to try and work out some defects which I would present to him. “Great” he would say, “but it still won’t work because of this”. Back again I would go. People might think that as a Grandfather he should just give a pat on the head and say “nice”, but I learned process and the importance of research at a very early age as a result.

Q: At what point did you realize design is your passion?
A: Growing up in rural Texas at the time did not afford many opportunities to be exposed to design. My art teachers in school advised I look into Commercial Art ( a term that died a thousand well-deserved deaths). I then discovered Graphic Design and taught myself. I was working for agencies in L.A. (where I ran to a week after graduating High School). A year or two later I was attending one of the best schools in the world on that subject – Art Center. Although I was working a few jobs to pay for it, I was completely in my element for the first time in my life.

Q: I’ve read you switched from being a graphic designer to a multi-discplined designer. How did you tackle the challenges of learning other design mediums?
A: What studying and the practicing of Graphic Design taught me was that all design decisions is not about aesthetics, they are about communication. You cannot divorce color, or texture or shape from meaning. The medium you work in does not matter as it is a message you are constructing. Everything else are technical details. This is where research and abandoning a fear of failure come to bear. Forget mediums. Just figure out what you are trying to say and say it.

Q: I just returned from the red dot awards in Germany and had a lengthly conversation with founder Peter Zec about the differences between European and Asian design. Some people call you the quintessential American designer. What defines American design?
A: I honestly never thought of myself as the quintessential American designer. If some say that it is perhaps more about the lack of a definition of “American Design” than about anything that I have done. I think design in America was last seen as a coherent concept in the mid-century. There is a momentum building up here now which I think will come to define American Design in the decades to come. Rather than a dogma we all agree to, It will be the individualistic approaches of people like David Weeks, Rich Brilliant Wiling, Todd Bracher, Marc Thorpe, Stephen Burks, Dror and a few others when combined, will give a lens to what was meant by American Design in the early part of the 21st century. I’m very honored to have a small role and more honored to call them friends.

Q: Do you remember the first “product” you designed? What was it and how do you feel about it now upon reflection?
A: Yes. I was around 2 years old. I took my father’s suspenders and attached them to the top and bottom of a paper bag and carried my toys around in them.

Q: Tell me about Whyte Label. I’ve read the press release. I’ve seen the pictures, but I want to hear from you what Whyte Label is.
A: WhyteLabel is a line I launched in spring 2011 during Design Week in New York. It is in essence a new business model for launching concepts. Each product is offered to the public using precious materials and a bespoke manufacturing method. A piece is only created once an order is placed allowing for no waste. Additionally, there are production versions of each product which can be licensed to other manufacturers for inclusion in their lines. Them materials and manufacturing methods differ, but the concepts remain the same. It is an experiment in progress but the results have been promising.

Q: Tell me a secret, what are you working on now? What’s your next project?
A: All I can say is that I am working with a company to “rethink home recycling.”

Q: Are you a collaborator or do you work best alone?
A: There really is no such thing as working alone when you produce things. There are always other parties involved. You collaborate with your clients when seeing a project through, each feeding into the process your strengths and relying on each other in the areas of your weaknesses. I do not have a large creative team around me although I  do prefer a more solitary approach in the initial creative phase. I have a business partner, Richard Hinzel who works out of London whom I bounce the initial ideas off of. He has a sharp mind for both the business and creative sides and adds a perspective I sometimes miss. It’s a good partnership.

Q: You’re married aren’t you? Kids? Do you feel that part of your life influences – changes who you are as a designer?
A: I am married with a son and a daughter on the way. My wife is a strategist for brands such as Lufthansa and Pepsi and always has time to hear my ideas. Her insights I find invaluable. Additionally, I try and spend a good deal of time with my son and as a result I am exposed to the way a child sees the world. It reminds me of how magical life really is.

Q: Can we have lunch?
A: Certainly. Name the time and place.

Q: What’s your favorite color and why?
A: I tend to work though most designs monochromatically. I find color to be distracting and something which I use to fine tune the design with later. Most people who know me would think my answer to what my favorite color is to be black, white or grey. In fact my favorite color is a bright yellow with a tiny hint of orange. I am in essence an optimist and I find this color to be the most optimistic of all.

Electrolux Design Lab 2011 finalist Adrian Mankovecký is the Slovakian designer behind the Spot Cleaner, a portable cleaning concept. Adrian is a student at Academy…

Best car designs according to the styling legend Fabio Filippini

The pandemic gave Sergio Spinel, an interior architect and furniture designer, a very unique opportunity to relook his craft as something that’s more than what…

For the last installment coming out of the IDSA conference, I had the opportunity to sit down and talk with Tucker Viemeister whose long list…