We’re in London ya’ll! That’s right. Yanko Design is on location at the 2011 Electrolux Design Lab at the Room Home Intelligence, Business Design Center in London, England! We just got a sneak peak at the venue and sat down to talk with 2011 jury member and Electrolux VP of Global Design, Henrik Otto. Hit the jump for the full scoop!

Tomorrow, September 7th, finalists will present their individual solutions for compact living to an expert jury panel. Only 8 designs out of 1500 submissions are left standing but only 3 will win! The grand prize: a 6th month paid internship at the Electrolux global design center and of course… hella dough!! (5000 to be exact) Be sure to follow us on Facebook and Twitter for live updates on all the hair-pulling and tears. Okay… so maybe there won’t be any hair-pulling, but it’s gonna be just as exciting so don’t miss out!

Interview with Henrik Otto – VP of Global Design for Electrolux 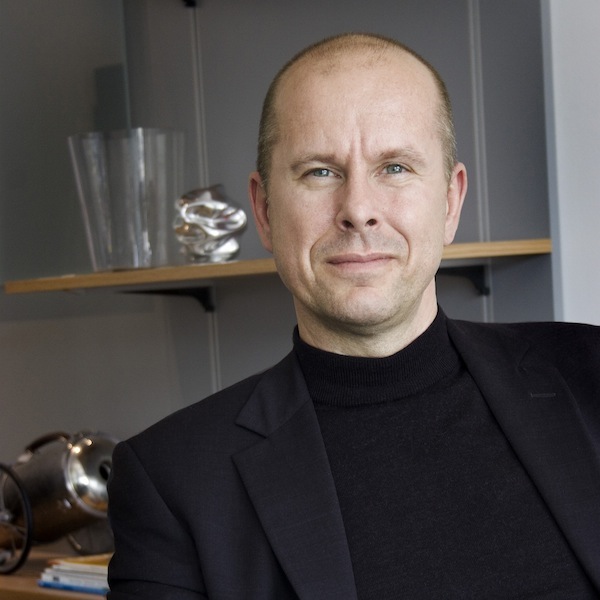 Me: Henrik! Thanks for joining us!

Henrik: Glad to be here!

Henrik: Ha! Thank you very much…

Me: You’re also on this year’s panel of jurors. Tell us, how did Electrolux Design Lab come to be?

Henrik: Well, Electrolux Design Lab was from beginning a student project. It was purely a project initiated in Europe as a way of making contact with young, fresh talent. That in itself was a success and from there it evolved into this big global competition.

Henrik: I remember the first time I was involved. It was after joining the company when the finals were in New York. It was great because the anticipation from all the students there was incredible.

Me: It seems like from the very beginning young designers really took to the competition. How many submissions were received this year?

Henrik: 1 and a half thousand submissions this year!

Me: Geeeeeze! So out of 1500 submissions what do you think of this year’s finalists?

Henrik: Well, obviously they’re in the finals for a reason. They are either the most interesting conceptually or some of the most talented designs in relation to this year’s topic of Intelligent Mobility. I’m definitely looking forward to hearing all of their presentations tomorrow.

Me: What sets these 8 final designs apart from the rest?

Henrik: Wow! You’re asking me to remember 1500 entries!? I obviously can’t do that, but what I think sets these finalists apart from the rest is that they dare to think laterally in relation to the design task they are given. They go outside the box and take a fresh view on how they go about creating a design solution.

Me: Alot of these young designers would probably say you have a dream job. Would you agree? What is like to work for Electrolux anyway?

Henrik: The atmosphere at Electrolux is wonderful. Do I have a dream job? Yeah. Definitely. The day I think it’s not fun I’ll probably do something else, but I’m still enjoying myself and I’ve been enjoying myself for the last 20 years! It’s both organic and strategic. As it should be, my job is more on a strategic level. Otherwise I’d be competing with my own designers. Within the individual studios around the world things are definitely very organic.

Me: What’s your personal design approach?

Henrik: I’ve got 3 keywords that I always say to everybody. You’ve got to be curious, passionate, and have stamina.

Henrik: Hey, if you don’t have those things you’ve got to do something else.

Me: What do you think the world will be like in the year 2050 in regard to home appliances?

Henrik: Well, it’s definitely not going to be like it is today. It will depend on what happens in neighboring industries like the food industry or packaging industry. I think we’ll see a lot of new kinds of appliances. With 70% of the world’s population living in urbanized areas, we’re going to be a bit congested, so things will have to change.

Me: A lot of this year’s submissions incorporated smart-phone technology and mobile control. Do you see appliance’s user interface moving in this direction?

Henrik: I think that’s the flavor of the month.

Me: There’s an app for that!

Henrik: Yeah! I think it’s a sign that people want to interact with their devices without physically being there. I’m not sure it will be a smart-phone… probably not. I don’t think we know what it will be.

Me: Who are your favorite designers?

Henrik: I love Ross Lovegrove’s work and I love his attitude toward what he does. I also think Yves Behar also has the right approach to what he does. I’m actually a big fan of a fashion designer who died not so long ago who I went to New York in the spring and saw the exhibition of. Alexander McQueen’s work completely blew me away.

Me: 100%. Also a graduate of Central Saint Martin’s here in London.

Henrik: Right… an absolutely fantastic collection at the Met but a sad destiny.

Me: Tell us about your inspiration. Does it come to you through research or would you say it’s intrinsic?

Henrik: I’d say it’s random. It can be anything. An event or observation. For the products that we design at Electrolux it’s always based on a consumer insight which has to do with some sort of attitude or value based need. But I think designers in general tend to be inspired by lots of different things whether it’s a party, music, or an existing design they’ve seen somewhere.

Me: If you could design anything in the world what would it be?

Me: That’s not quite in this world, but you could definitely design a space habitat for me!

Henrik: Haha! I met a designer a couple of years ago and she actually does that for a living. The interesting part is that it has to be super efficient and minimalistic while it’s traveling… once it’s there it has to unfold into something livable and much larger. There’s a wonderful challenge in that.

Me: Great answer! Okay… here’s one for ya. It’s a really simple questions but one that can also prove very telling. What’s your favorite color and why?

Henrik: It’s actually a mood thing! Usually I’m wearing all black, but today I’m wearing all blue so it depends on mood. To be quite honest, the simplest thing for a designer is to wear all black because you don’t have to think about what you put on in the morning. I actually like the color of tan leather, though it doesn’t look good on anything but shoes and suitcases.

Me: Nice shoes by the way!

Me: Last question! What advice can you give to designers both new and seasoned that are trying to make it in the industry?

Henrik: Hmmmm… That success is 20% talent and 80% hard work. If you love what you’re doing don’t give up. Hang in there because you’re staying true to yourself and that’s what will drive you forward. You have to be talented to become a designer, but to become a successful designer is a lot of hard work and sweat!

Me: That’s not too hard to remember. Thanks again, Henrik! We’ll see you tomorrow!!

Fashion is fickle. What works today, may not work tomorrow. Which is why it was high time fashion got modular. The Dooq brings modularity to…

This water purifier fits right inside your drinking bottle, giving you fresh water with each sip

https://www.kickstarter.com/projects/nuvoe/nuvoe-the-water-purification-upgrade-for-your-bottle I feel like this year’s prepared me with so much material, I could possibly do a PhD on purification. From masks to filters, antimicrobial…

Sinister Side of Kitty

Nothing better than candles as mood lights and if they are scented, that’s even better! So what are you supposed to do if you feel…