Design is a heady mix of inspiration and perspiration. One avenue that some designers seriously contemplate but rarely incorporate is Biomimetics. It’s kinda tough implementing engineering systems and modern technology to ideas inspired by nature and animals. Here is a look at Ten Creative Bionic Designs that look awesome and are almost as perfect as their inspiration. Almost, coz you can’t get better than Mother Nature. 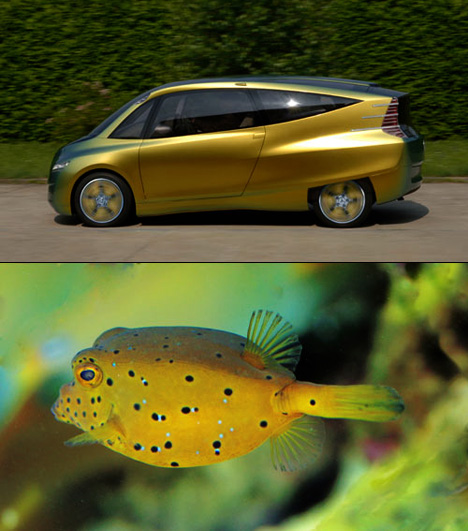 The eminent aerodynamics and efficiency of the form of a boxfish proved to be the base of this 2005 Mercedes-Benz. This very cute streamlined car has a 65% lower drag coefficient than other compact cars that were out at its time.

Creepy animals evoke creepy designs as well, like this Philips webcam by Flynn Product Design. A cross between a spider and octopus (maybe even a monster); the legs help re-position the camera to a favored nook.

Morphotex fibers that you see here are inspired by the “vibrant blue” of the Morpho butterflies. Apparently these butterflies’ wings are made of many layers of proteins that refract light in different ways. The vivid colors are mimicked in these Morphotex fibers sans the use of dyes or pigments.

The complex surface of large-winged insects such as butterflies and sacred lotus remain dirt-free thanks to their complex surface topography and the way it interacts with the physics of water molecules. Hydrophobic surface allows self-cleaning; this is the premise of the Lotusan exterior coating. This coating uses the principles of micro-structure to automatically become clean after a rain-shower.

This balloon floater takes its inspiration from the manta ray. It’s a remote-controlled hybrid floater with a helium-filled ballonet and a beating wing drive.

Here is a set of Bionic Penguins that are actually autonomous underwater vehicles that can navigate through the seas and establish “differentiated, variable behavior patterns in group operation.”

4) Bullet Train Inspired by The Kingfisher 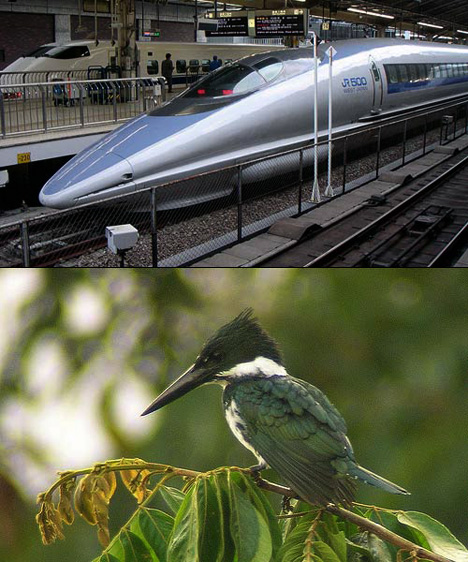 In a bid to resolve the extremely loud claps that occurred when Japan’s bullet train emerged from tunnels, Japanese engineers resorted to the profile of a Kingfisher Bird. The nosecone of the train was designed after looking at how effortlessly the bird dove into the water beak-first. 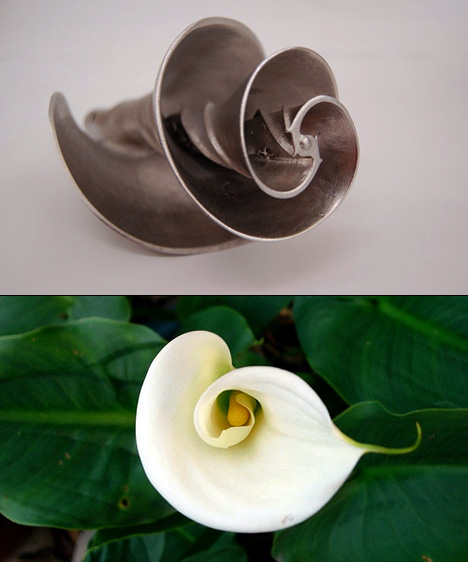 The centripetal spirals of the lily flower aid with the flow of liquid. This inspired designers to come up with this water mixer that mixes more liquid with a fraction of the horse power generally required. 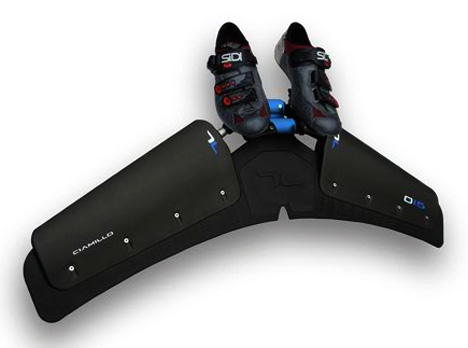 Fish-fin inspired Lunocet is an ideal aid for swimmers. It’s made from silicon covered in carbon fiber with a titanium footplate. This system gives you the same power on a downstroke as an upstroke. Power Swimming here we come! 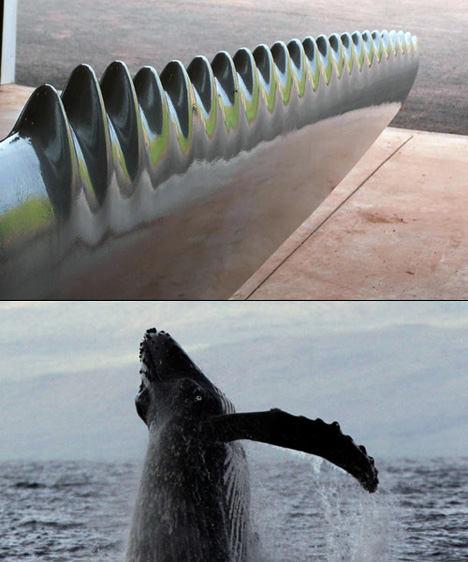 Tubercle Technology or the bumps found on the fins of a Humpback whale is the inspiration behind the wind turbine blades. Using the whale-fin design has made the turbines quieter, more reliable when winds fail, and apparently perform even better in turbulent winds!

When you’re cutting and slicing through ingredients for your next dish, what your knife looks like might be the least of your concerns as long…

Presenting the best way to get lost in a walking stick. The GeoCane by Felix Hardmood Beck takes the idea of a divining rod and…

This crab-inspired catamaran is a luxurious solar powered beast that runs on water as well as land!

There’s not been much evolution in the yachting industry except the interior luxury and cosmetic upgrades. Lazzarini Design Studio wants to change that with a…