The planned demolition of an abandoned tobacco warehouse, focus of a bitter dispute involving developers, Jersey City officials and artists who moved in, was likely to anger preservationists bent on saving the city’s industrial district. So city officials called on a big name yesterday, Dutch architect Rem Koolhaas, to unveil plans for a 52-story “vertical city” of condos and art studios that will dramatically change the city skyline as it replaces the warehouse.

The $400 million project at 111 First St. calls for a mix of apartments, living and work condominium studios for artists, a hotel, stores, parking and a gallery. It’s the first large-scale residential project in the United States for the Dutch-born architect’s firm, the Office of Metropolitan Architecture. Koolhaas, internationally known for designs of striking, practical buildings from Beijing to Seattle, said the new building would blend with the historic warehouse district surrounding it.

The two-acre project, which would replace the P. Lorillard Co. tobacco warehouse, involves a tower of three stacked buildings at First and Washington streets, the Dutch-born architect said. The lower level will include entertainment businesses, retail space, parking and condominium lofts and galleries for artists. A hotel and market-rate condo apartments will be built above those.

The tower takes its unusual shape by facing the middle section at a 90-degree angle from those above and below it. This unique configuration will allow for gardens, open terrace areas for residents, a wading pool and outdoor spaces. 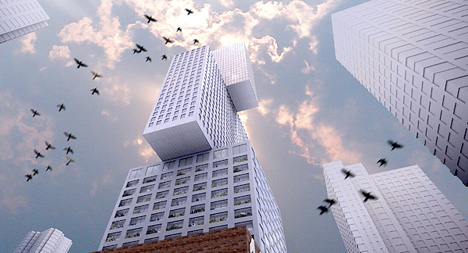 Those who stay in apartments crave for spacious bungalows and those who live in landscaped acres dread the maintenance! So what really is the ideal…

The New and Improved Gas Co.

This original concept by Naser and Taher Nasiri was designed as an office space for a gas company. However abstract, the concrete and glass and…