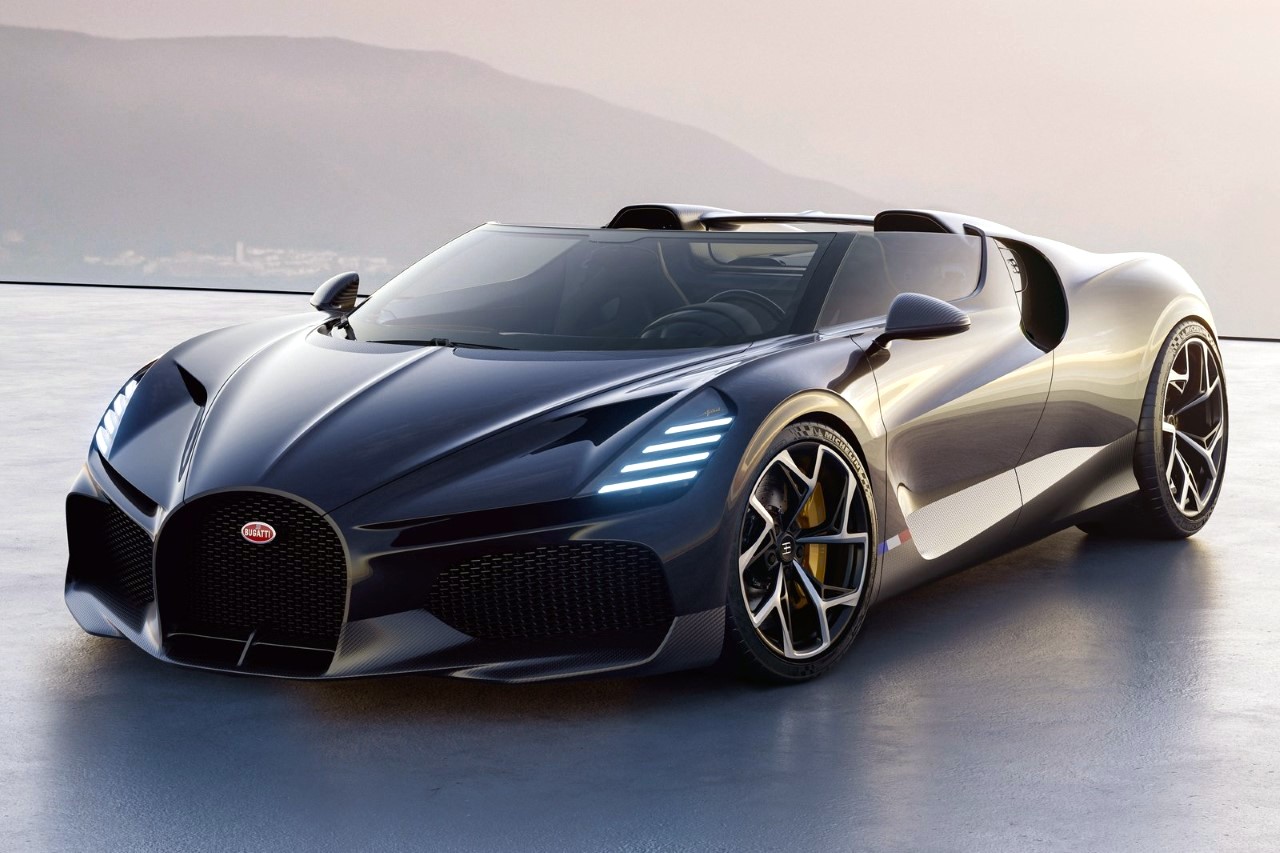 There aren’t many engines that have had quite the illustrious career that the W16 has had. Debuted with the Bugatti Veyron in 2005 (that’s a staggering 17 years ago), the W16 has been at the heart of all Bugattis made since, but the company’s decided to say farewell to it in style – by giving it the ultimate send-off in the form of a stunningly beautiful new racer that brings back Bugatti’s original open-top style. The W16 Mistral, unveiled mere days ago, marks an important epilogue in one of Bugatti’s most noteworthy storylines, with Bugatti CEO Mate Rimac saying, “For the final roadgoing appearance of Bugatti’s legendary W16 engine, we knew we had to create a roadster. Well over 40% of all Bugatti vehicles ever created have been open-top in design, establishing a long lineage of performance icons that – to this day – are revered the world over. In the Chiron era there had, to-date, been no roadster, so the introduction of Bugatti W16 Mistral continues this legacy, driven by enormous demand from our clients for an all-new way to experience the mighty performance of our iconic engine. The W16 Mistral opens the next chapter in the Bugatti roadster story, inspired by over a century of open-top legends.” 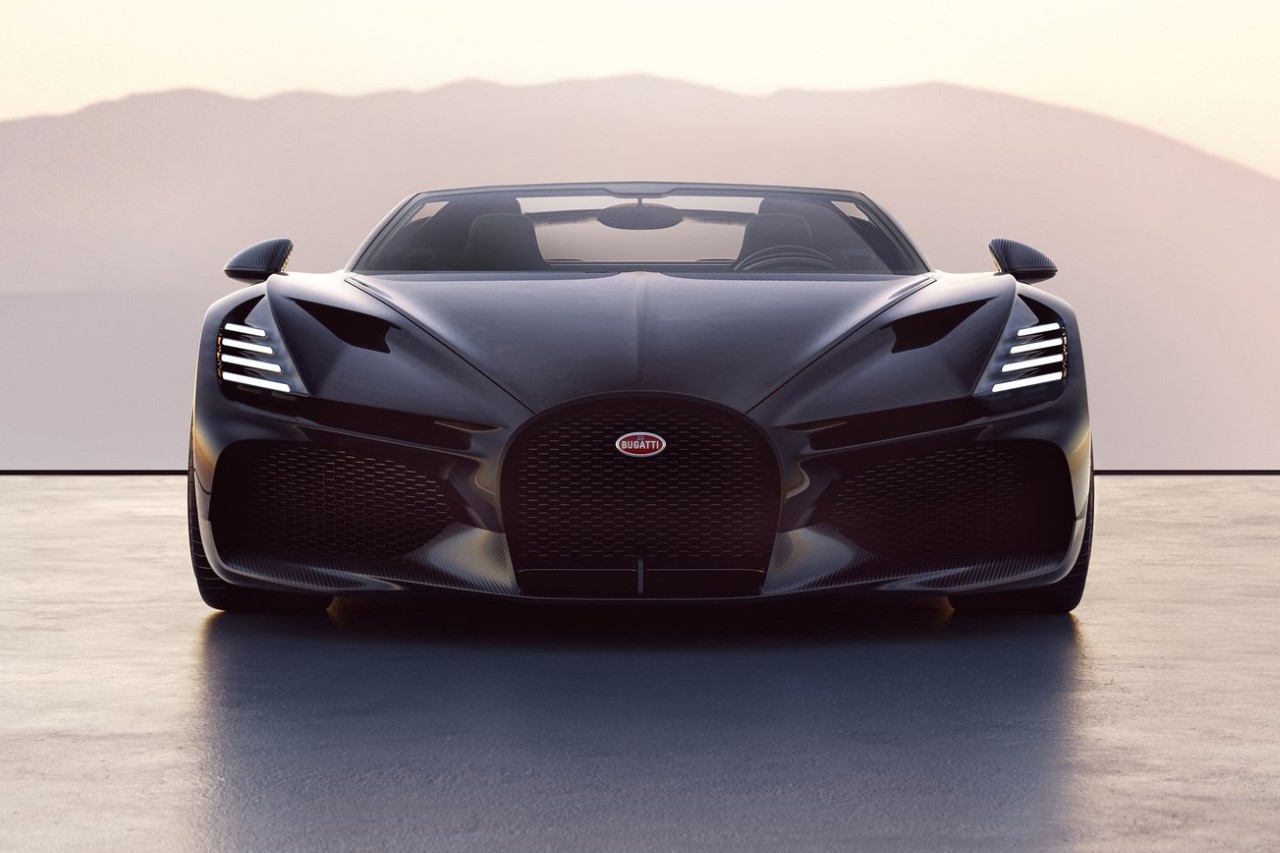 The engine, however, is just a mere component in the glorious machine that’s the W16 Mistral. Named after the powerful wind that blows from the Rhône River valley, through the Côte d’Azur in southern France and into the Mediterranean, the car touts power, along with a performance that can ‘blow you away’. The car comes with a stellar open-top design that harks back to Bugatti’s origins with some of the first cars being open-top racers. Shift your eyes to the side and you’ve got one of the most interesting profiles possible. There’s a gestalt of continuity with the open-top design, and the car isn’t one to shy away from tight curves in certain places, and fuller arcs in others. The car still comes with Bugatti’s horseshoe radiator (although one could wonder what would happen of this detail if the company’s next powertrain was electric), aggressively sculpted air-vents on the front, side, and back, and that gorgeous C-pillar on the back that still comes with a tight C-shaped design. The headlights on the front sport four bars that “subtly nods to the W16 Mistral’s four-wheel-drive and four turbochargers”, mentions Frank Heyl, Bugatti’s Deputy Design Director. 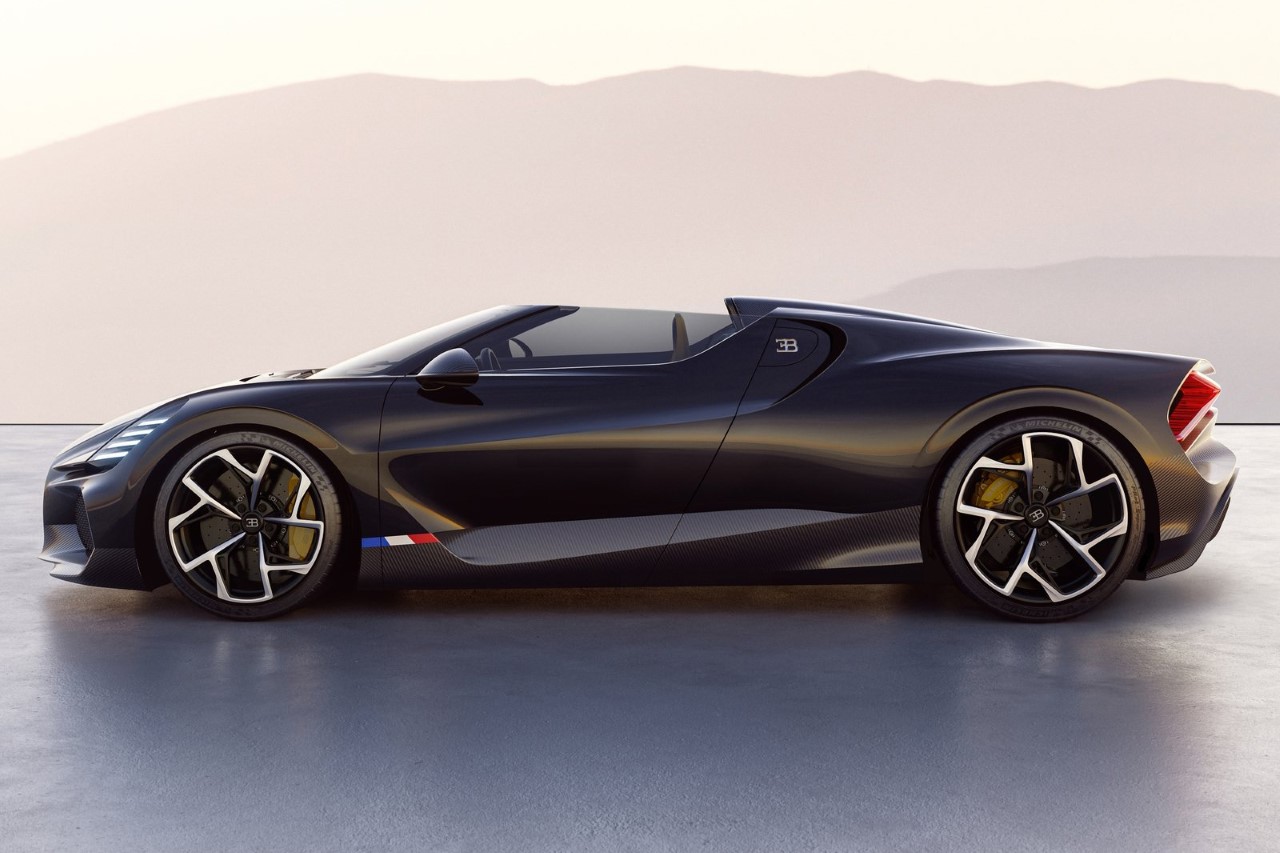 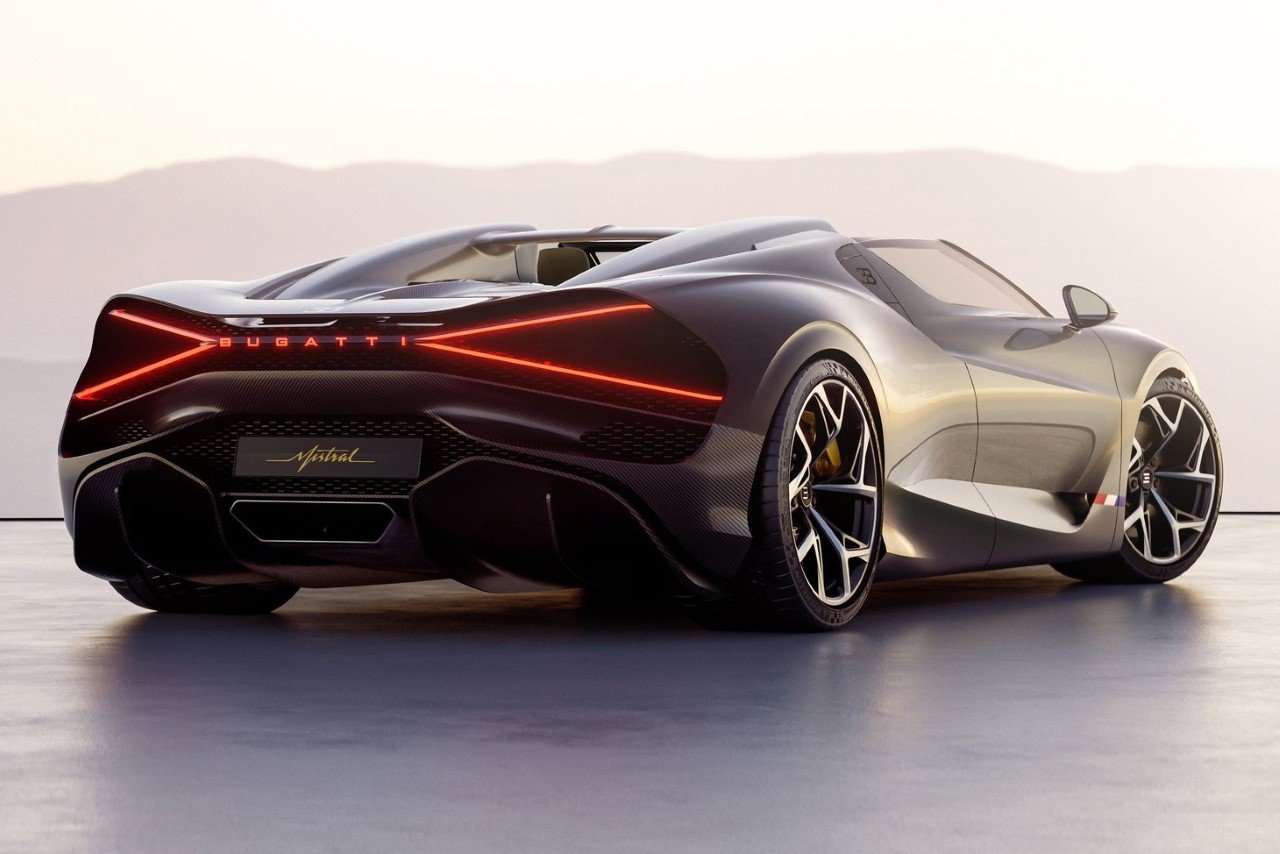 “We know the W16 Mistral will always have significance in the story of Bugatti, marking the last time that perhaps the greatest ever automotive powertrain is used in a roadgoing production car”, said Achim Anscheidt, Design Director at Bugatti. “We, as a design team, felt enormous pressure to deliver styling that immediately conveyed this landmark moment, drawing inspiration from some of the most beautiful roadsters in Bugatti history.” 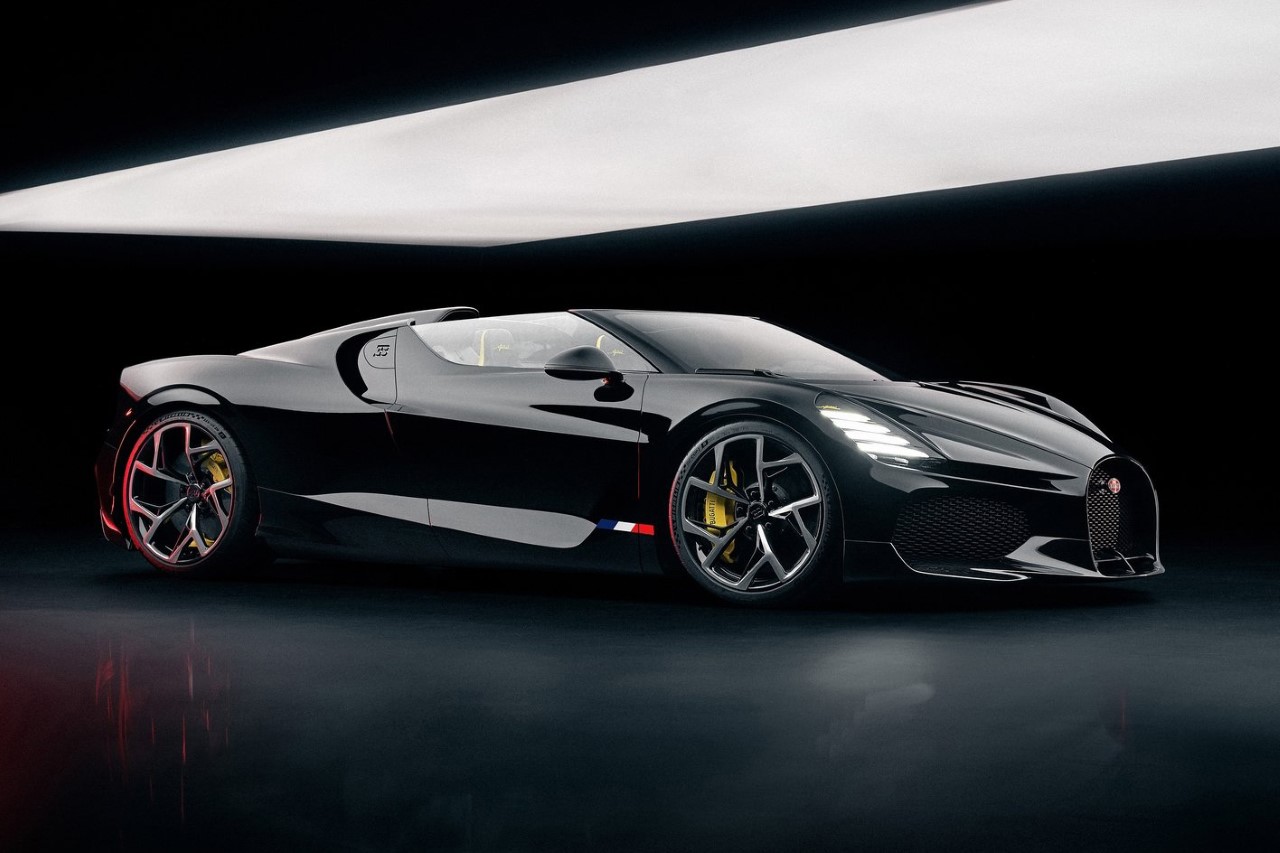 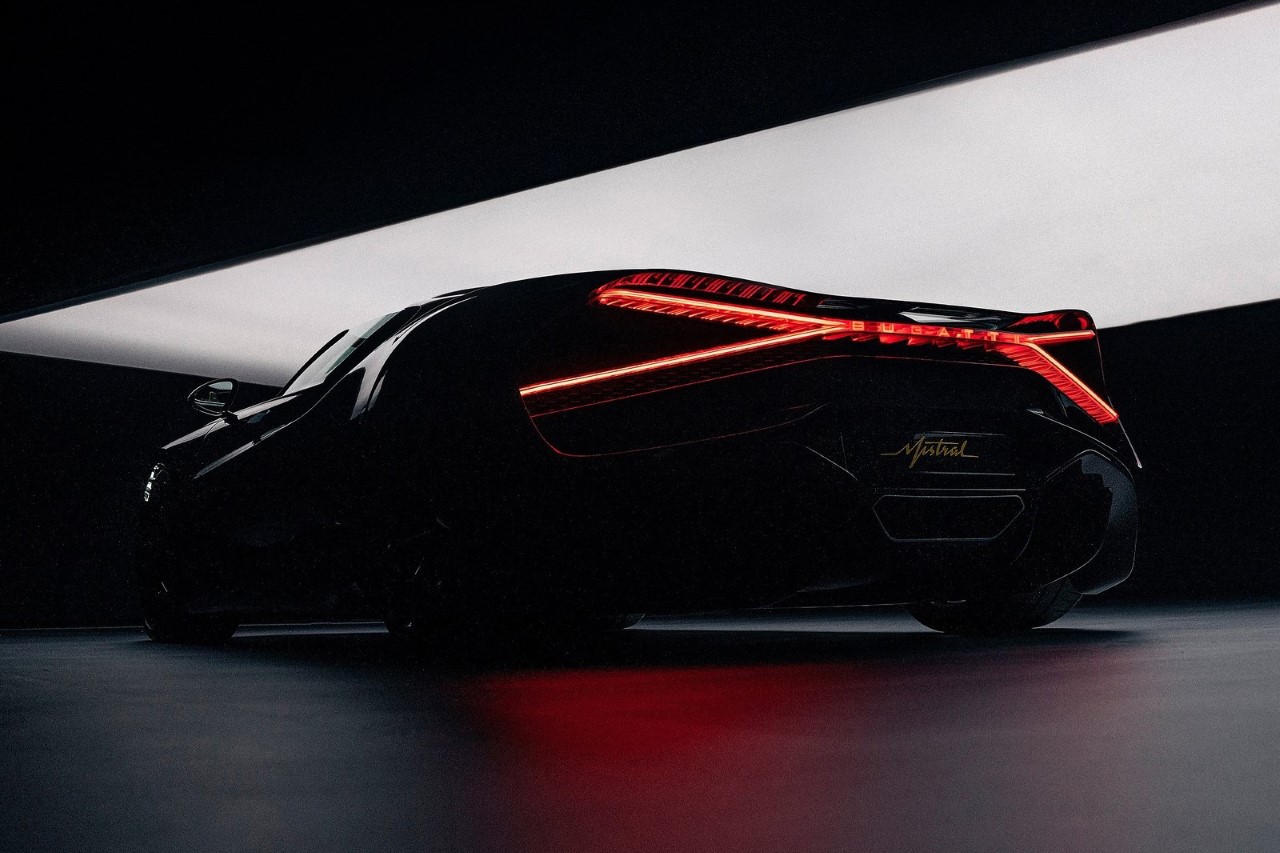 The X-shaped taillights show the company’s willingness to still retain a canvas for exploration. While the front of every Bugatti since the Veyron has remained strongly loyal to the brand DNA, the rear of the car still has its creative elements that allow each model to stand apart, from the Veyron to the Chiron, Divo, Centodieci, Bolide, and the La Voiture Noire. The X seems like a hat-tip to the Bolide’s X-shaped headlights and taillights, although much more striking and elegant, and believe it or not, functional. Heyl mentions that the X-taillight “serves the function of venting the side oil coolers through ducts connecting the triangular negative space in between the X beams to the side radiators. Therefore, a pressure drop is created between the side intakes and the outlets at the back of the W16 Mistral which helps to manage the mid-temperature cooling circuit of the mighty W16 most effectively.” 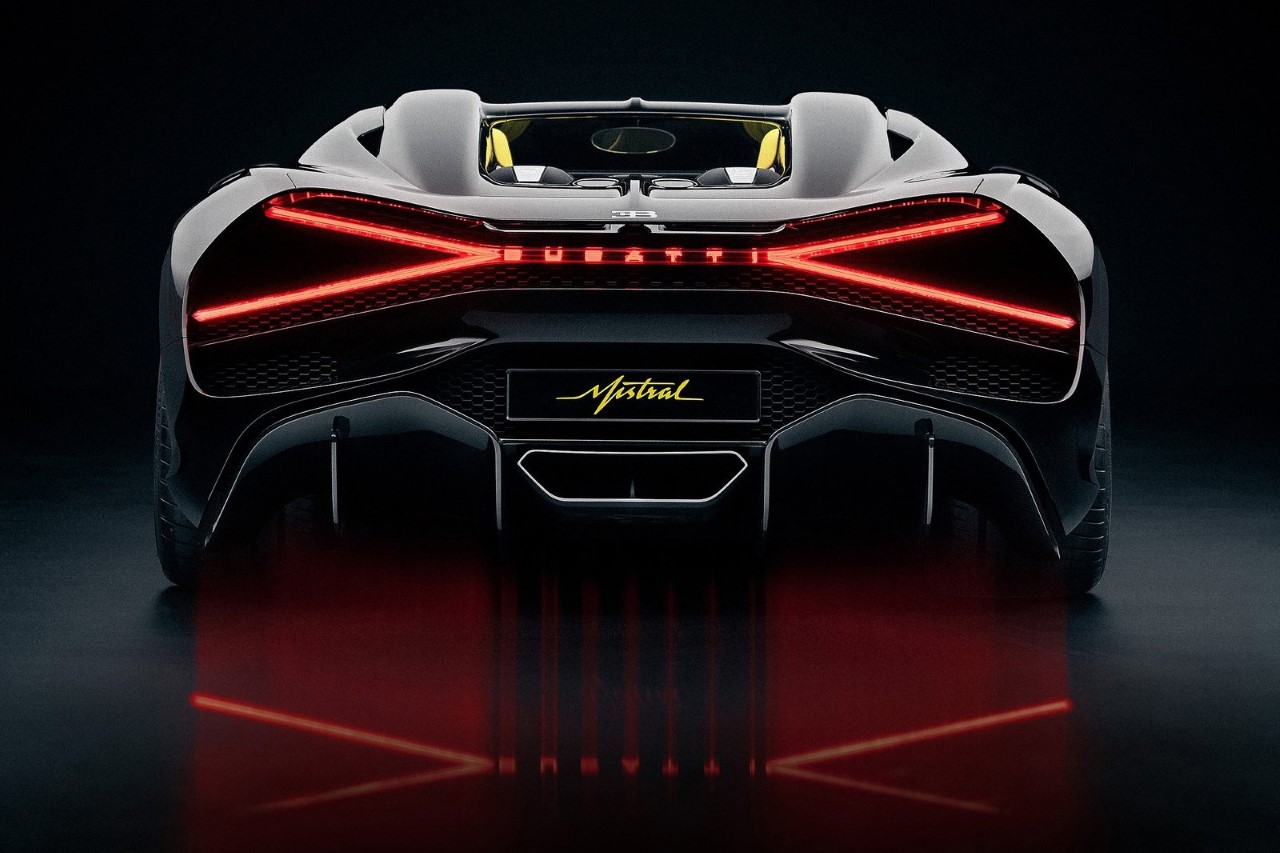 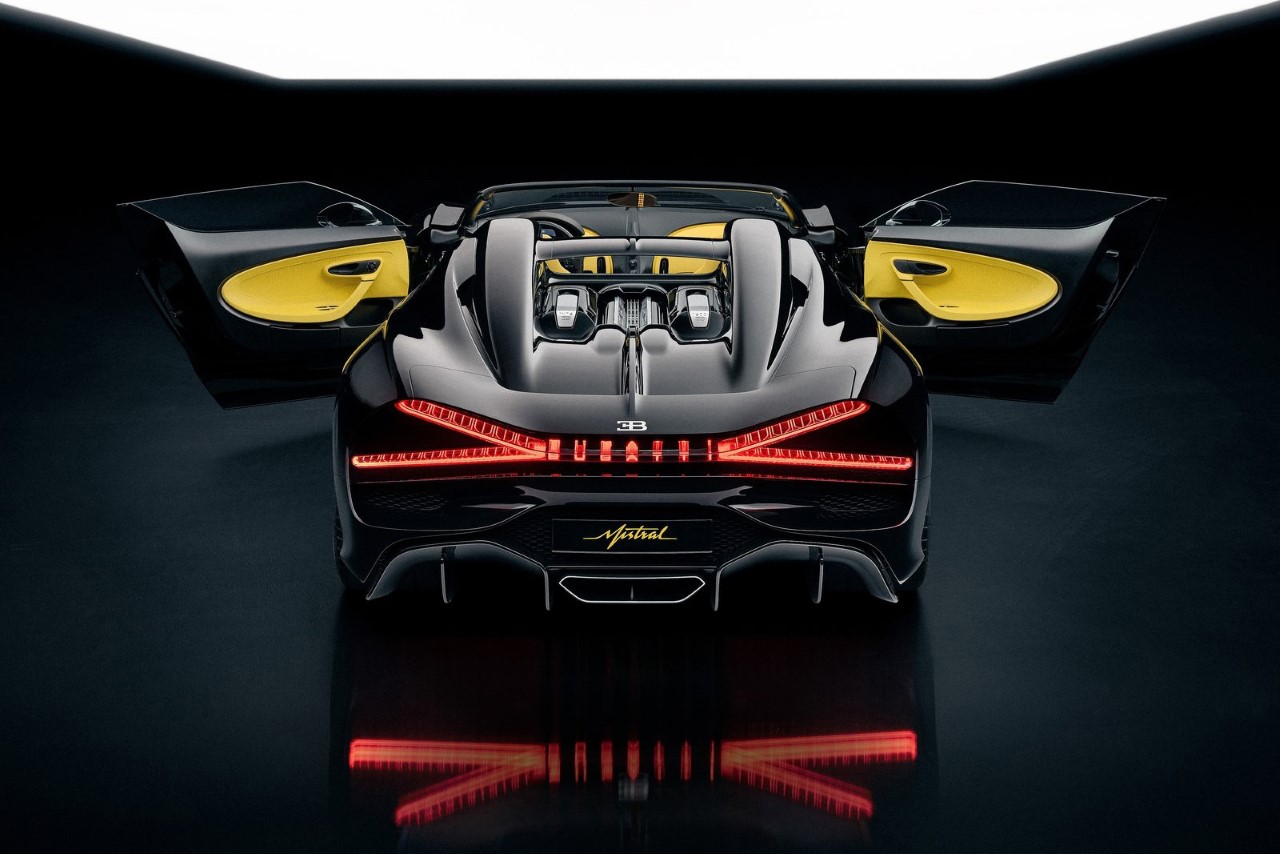 The color scheme is no coincidence either. The black/yellow palette is an ultimate hat-tip to the company’s founder, Ettore Bugatti, who chose the black and yellow combination for many of his personal cars, including his Type 41 Royale. This celebration of color continues onto the inside of the cars too, creating a kind of contrast that seems striking yet pleasant. 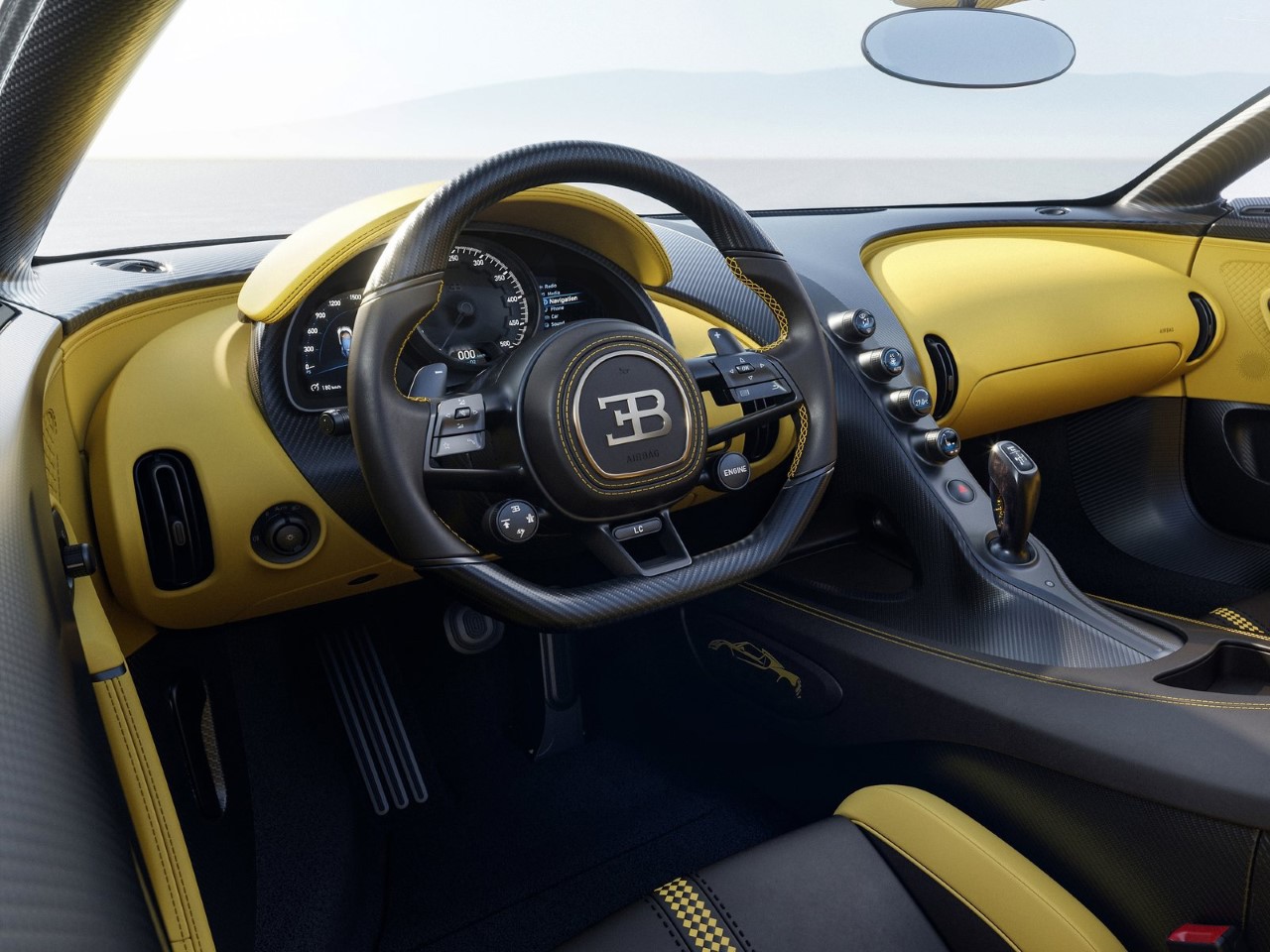 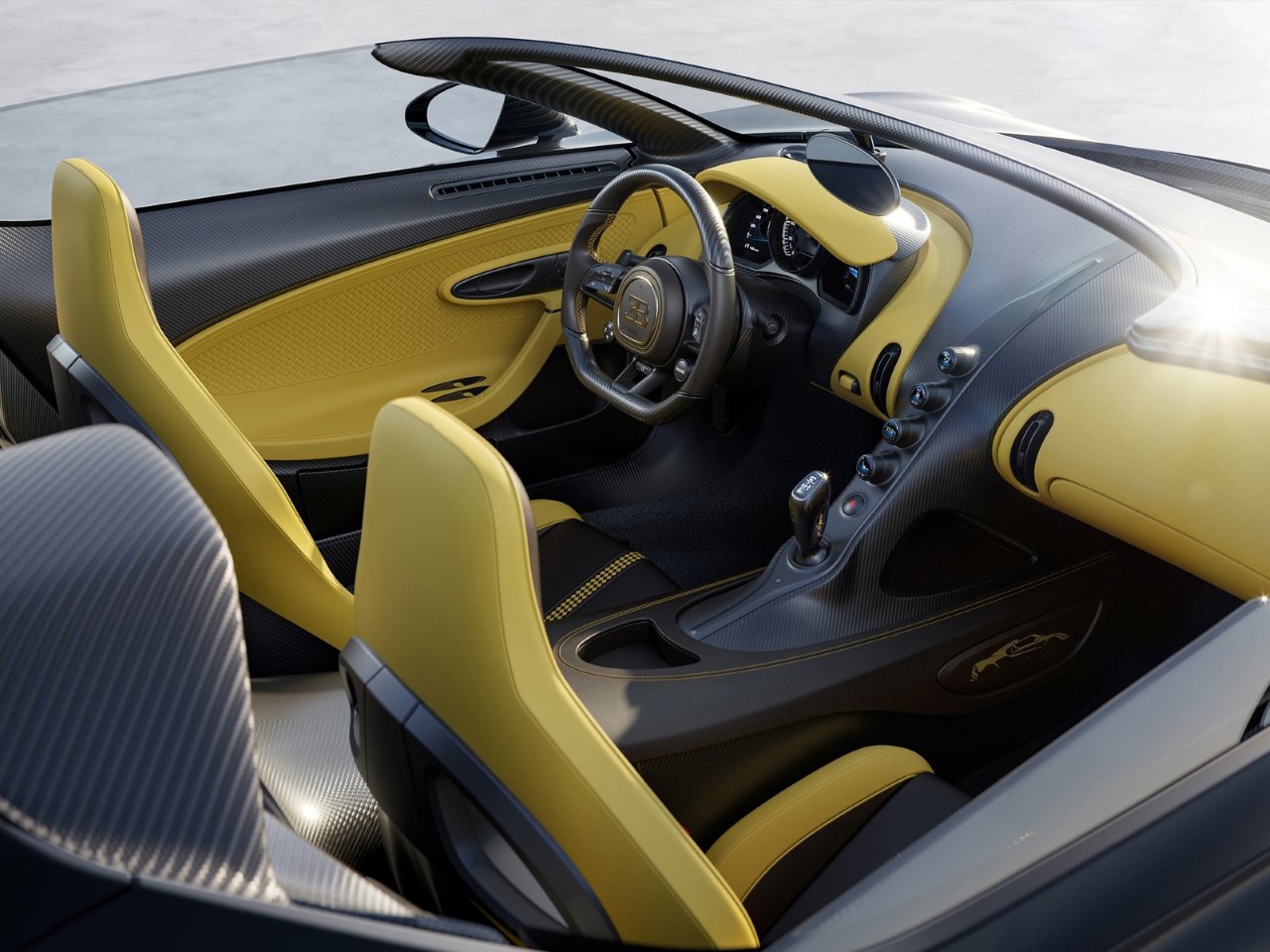 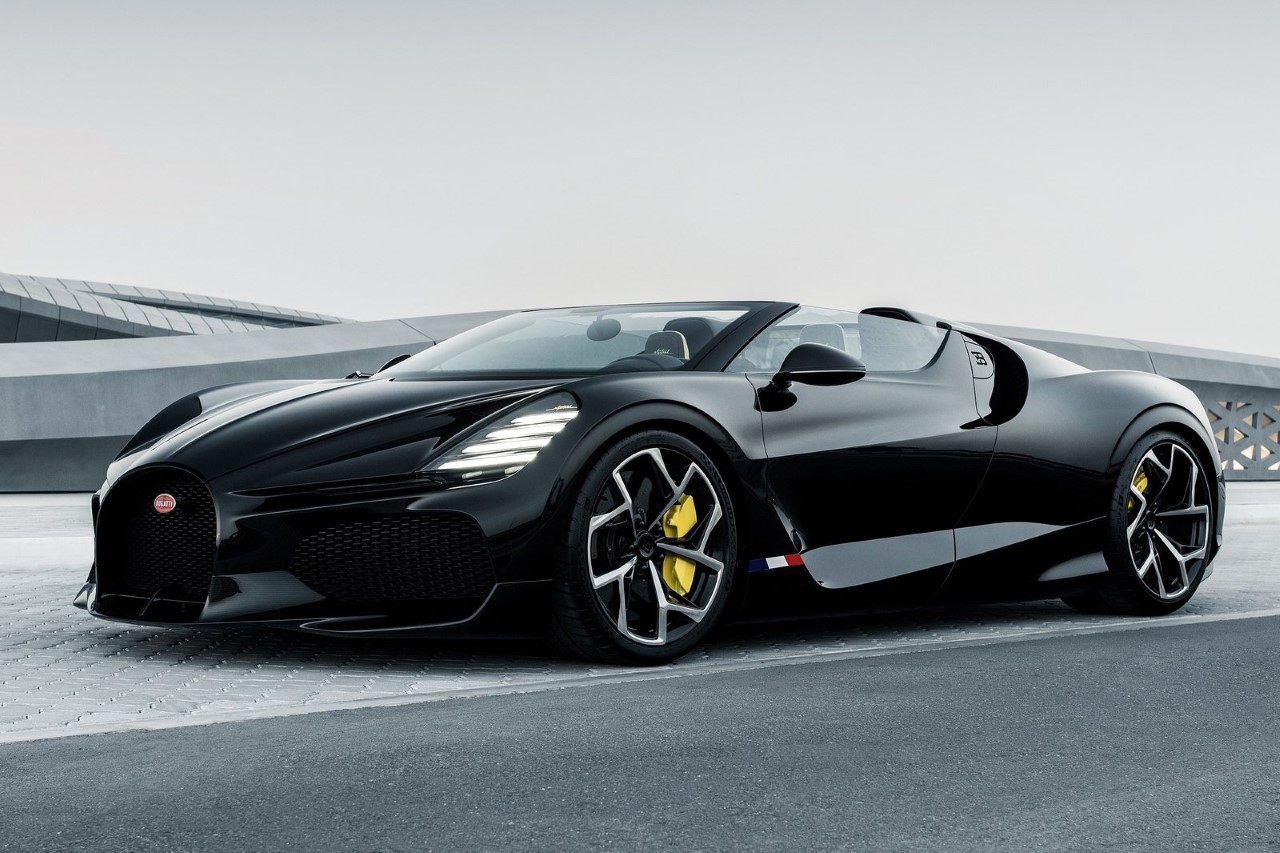 Bugatti plans on building only 99 units of the W16 Mistral, with deliveries in 2024. Priced at a whopping 5 million euros, the car’s entire production run has already been sold out! 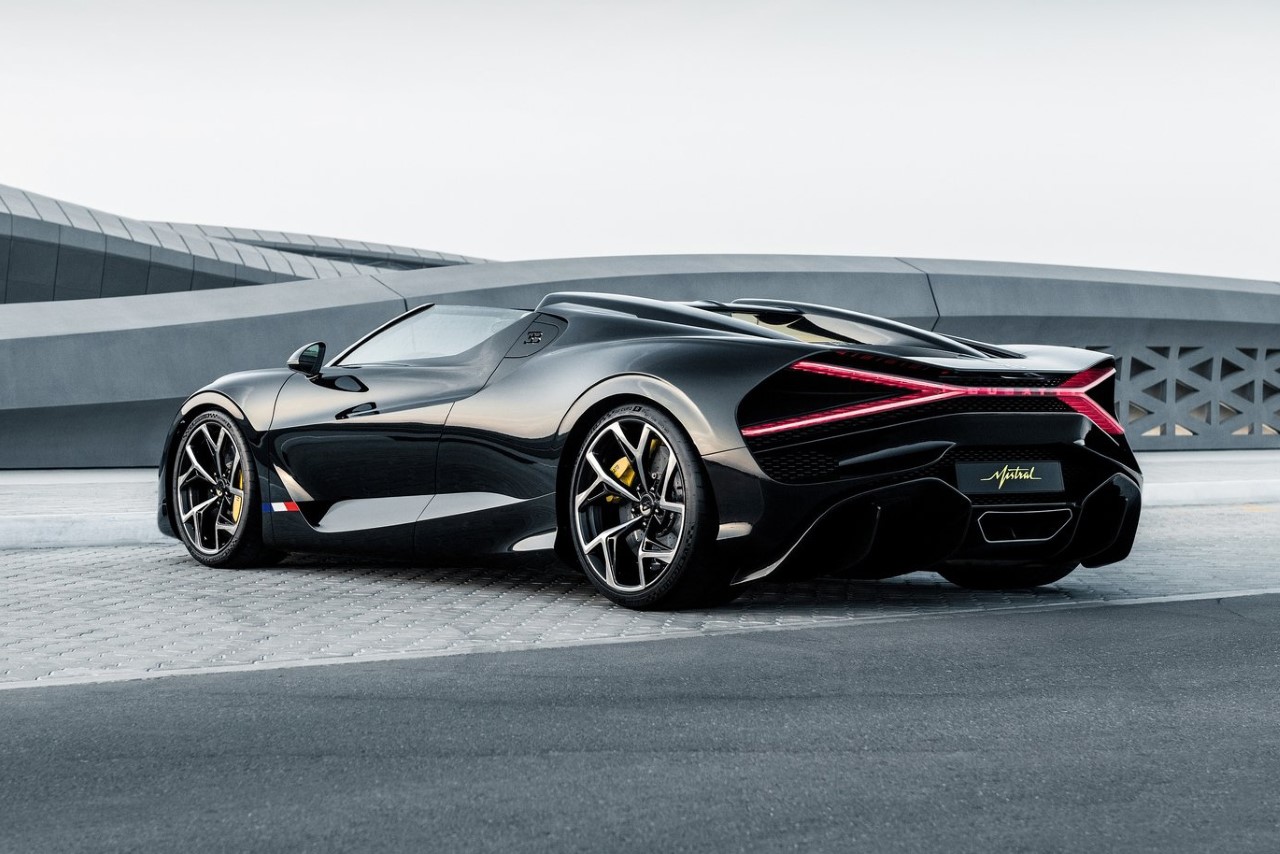 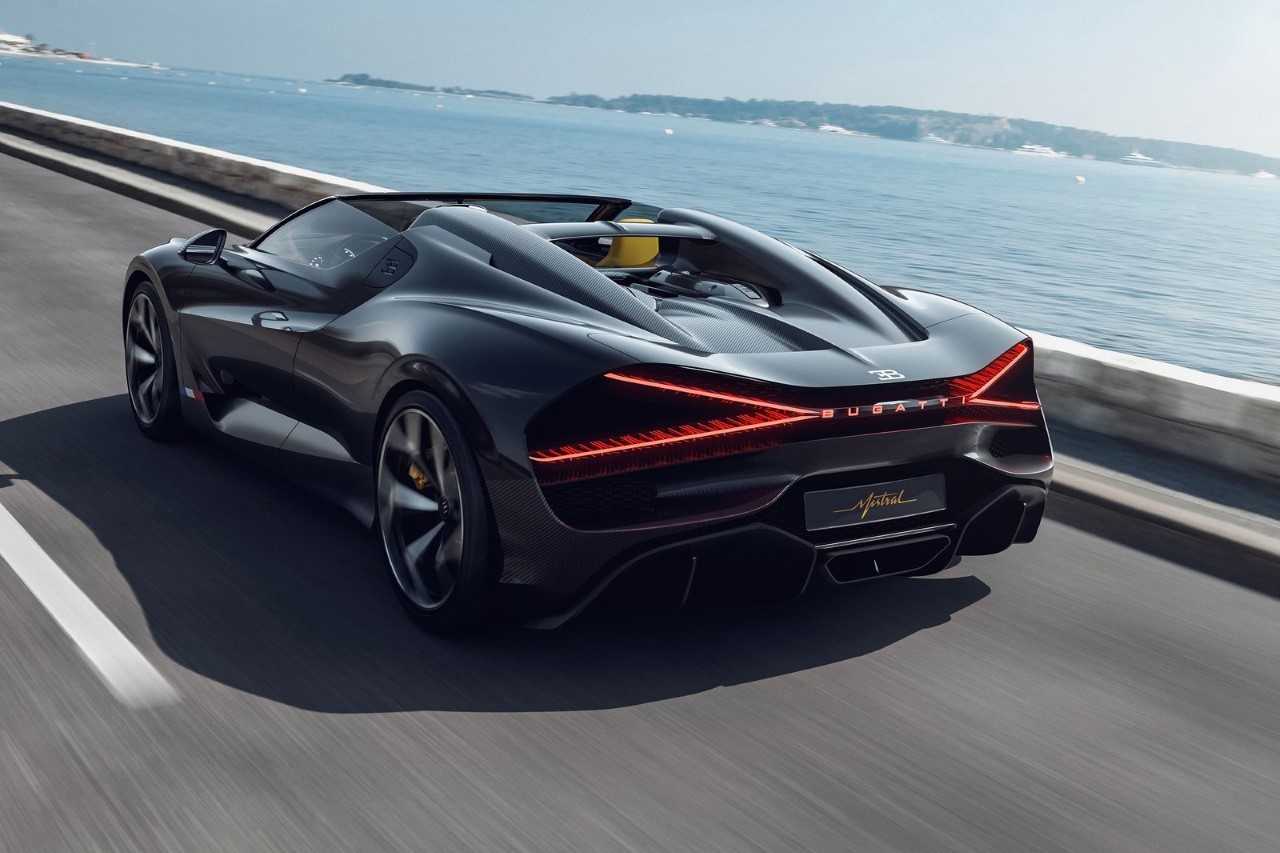 This Ring Fits Me Right

Those of you, who travel by cars, please move on to the next post, because this one is just for my friends who take the…

High modulus carbon fiber! Bike for the talented rider! This bike is made for those folks who use their car during the week, but on…

Rolls-Royce and Yachts. That is how high rollers roll on both Terra firma and Aqua fluida. So why not blend em both into a single…

Trendy electric bike attachment clips onto conventional wheelchair to run it at 20km/h!

Living with a disability presents its own set of challenges, thus even a strand of freedom can be a life-altering experience. In this space, the…