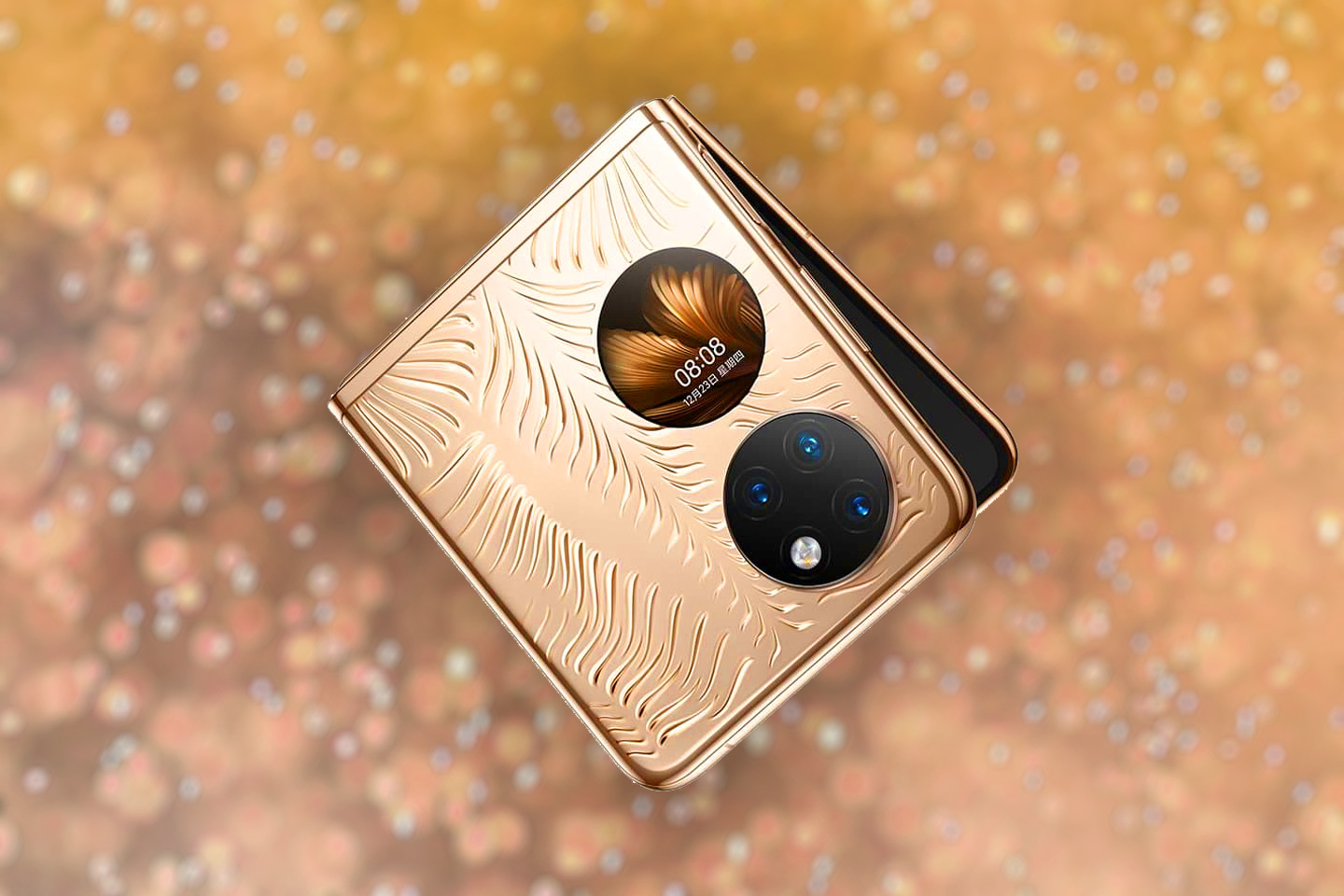 Proving that they may be down but they’re definitely not out, Huawei dropped images of their upcoming foldable, the P50 Pocket in a photoshoot for Harper’s Bazaar China. The folding phone models itself on the P50 (which launched in July this year) and will be exclusively available to Huawei’s Chinese demographic. Set to officially launch on the 23rd of December 2021, the phone comes in a clamshell format like the Samsung Galaxy Z Flip and the Moto Razr, although with an aesthetic that’s eye-catching, to say the least. Instead of flat shades or metallic hues, the smartphone’s surface sports embossed pattern-work with a gold finish, looking almost like an ornate makeup mirror from the Art Deco period. 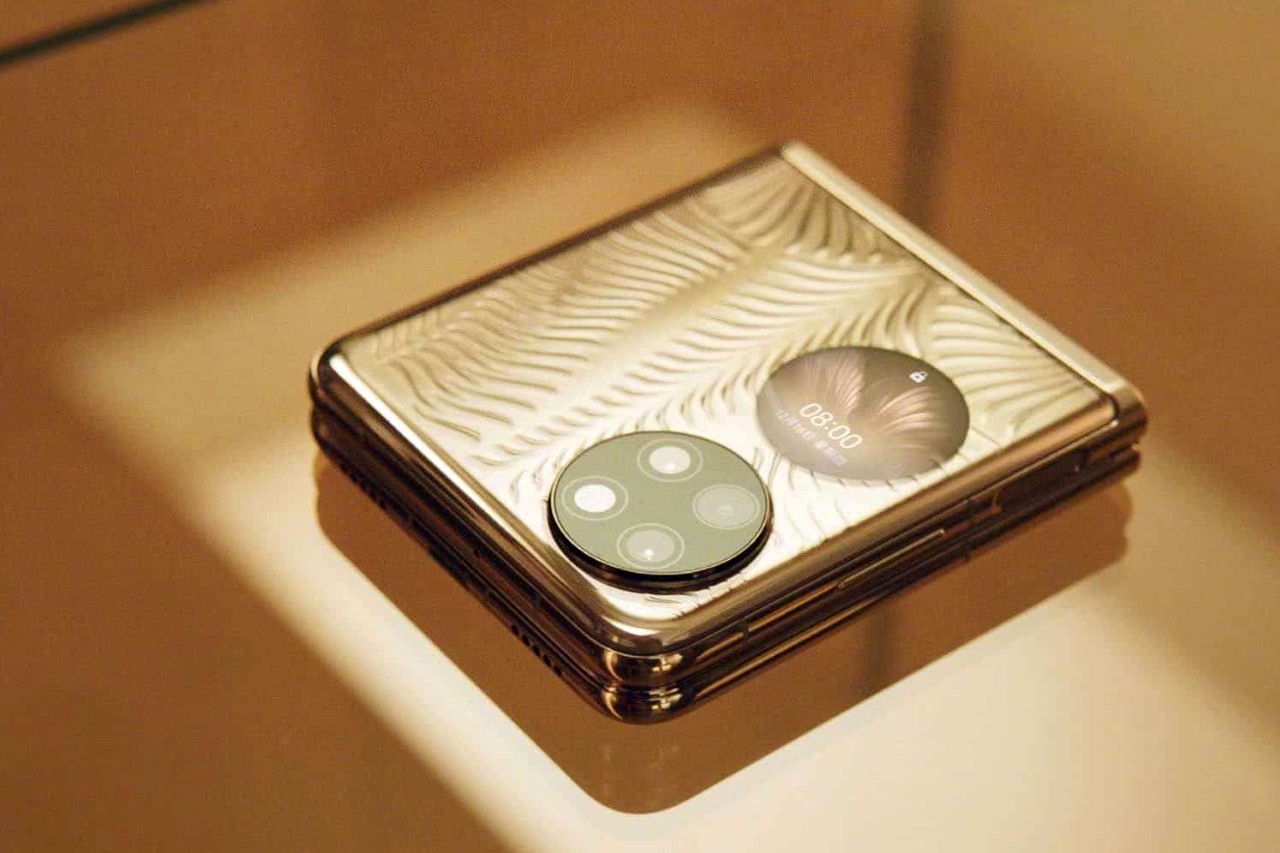 There are a few things worth unpacking with the P50 Pocket’s design – starting with its aesthetic. Created to clearly appeal to a certain demographic, the P50 Pocket probably won’t be a very cheap phone (some speculate within the $800-900 range), which explains its opulent aesthetic. The P50 Pocket, shown here in the hands of Chinese actress Guan Xiaotong, looks more like a makeup kit than a smartphone, trying to blur the lines between tech and fashion to create a phone that evokes a sense of desire. The embossed pattern and the gold finish reinforce that approach, while the phone sports two large black circles on its outer surface – one being a camera bump with not two, but THREE lenses, and the other, in fact, being a miniature display that acts as a notification screen and a viewfinder while taking selfies. When open, the camera bump and screen look a lot like the two black camera bumps seen on the original P50, creating a bridge between the P50 and the P50 Pocket’s design languages. 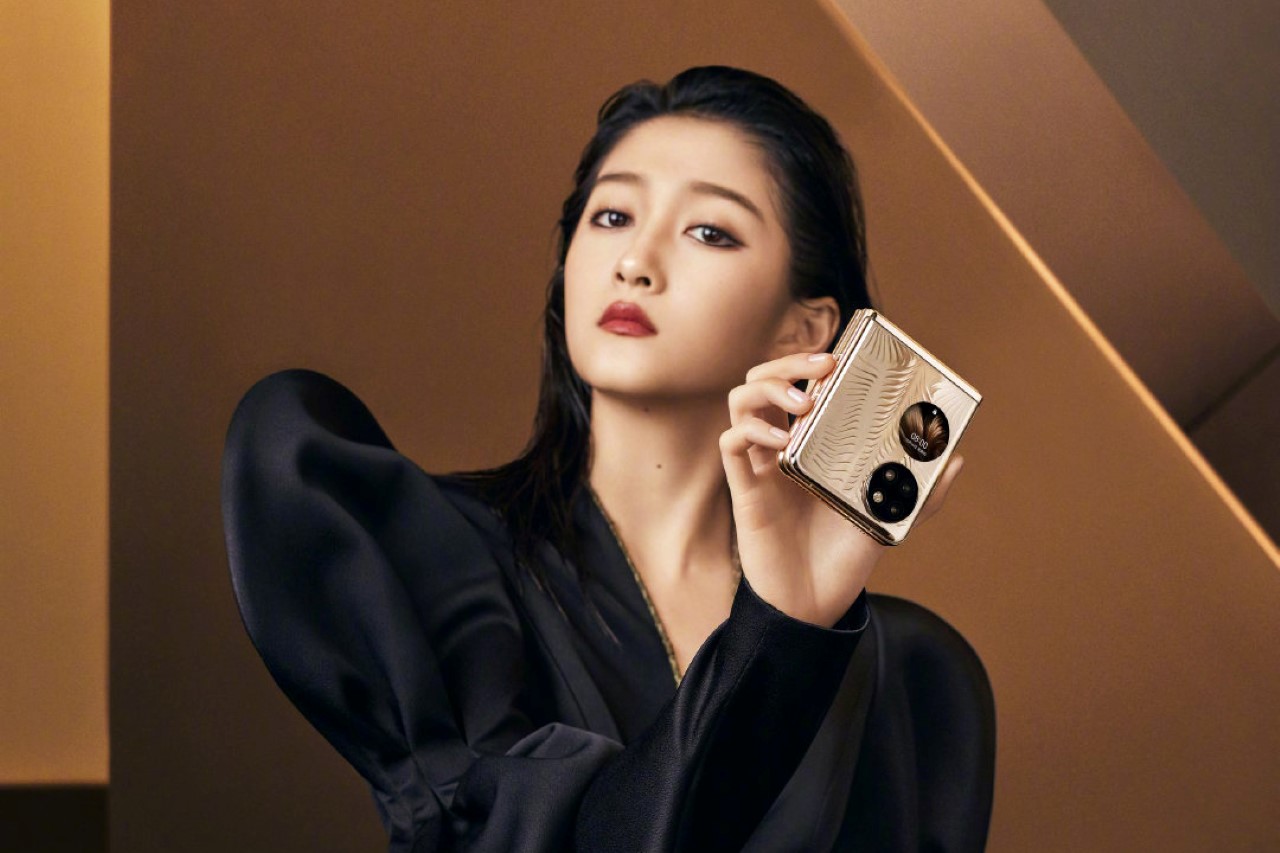 While the P50 Pocket isn’t due for another 3 days, details have begun emerging of its technical specs. The phone is rumored to be equipped with a large 6.85-inch folding screen (marginally larger than the Galaxy Z Flip 3) on the inside, while the outer circular screen measures a mildly disappointing 1-inch in diameter (that’s much smaller than the display found on most smartwatches).

“The rear camera setup of the Huawei P50 Pocket has a Sony IMX766 50-megapixel primary camera. It will be coupled with a 13-megapixel ultrawide lens and an 8-megapixel telephoto camera with 3x optical zoom”, GizmoChina reports. The clamshell-style phone will run on Huawei’s Kirin 9000 chipset (which means it won’t be 5G compatible), will have a 4,100mAh battery with support for 66W fast-charging, and a fingerprint reader built into the power button. The phone is rumored to be available in silver and gold color variants and will run Huawei’s own harmonyOS. Due to global restrictions, the phone isn’t likely to be sold outside the Chinese mainland, although I’m pretty sure a few tech YouTubers will have their reviews up pretty soon. 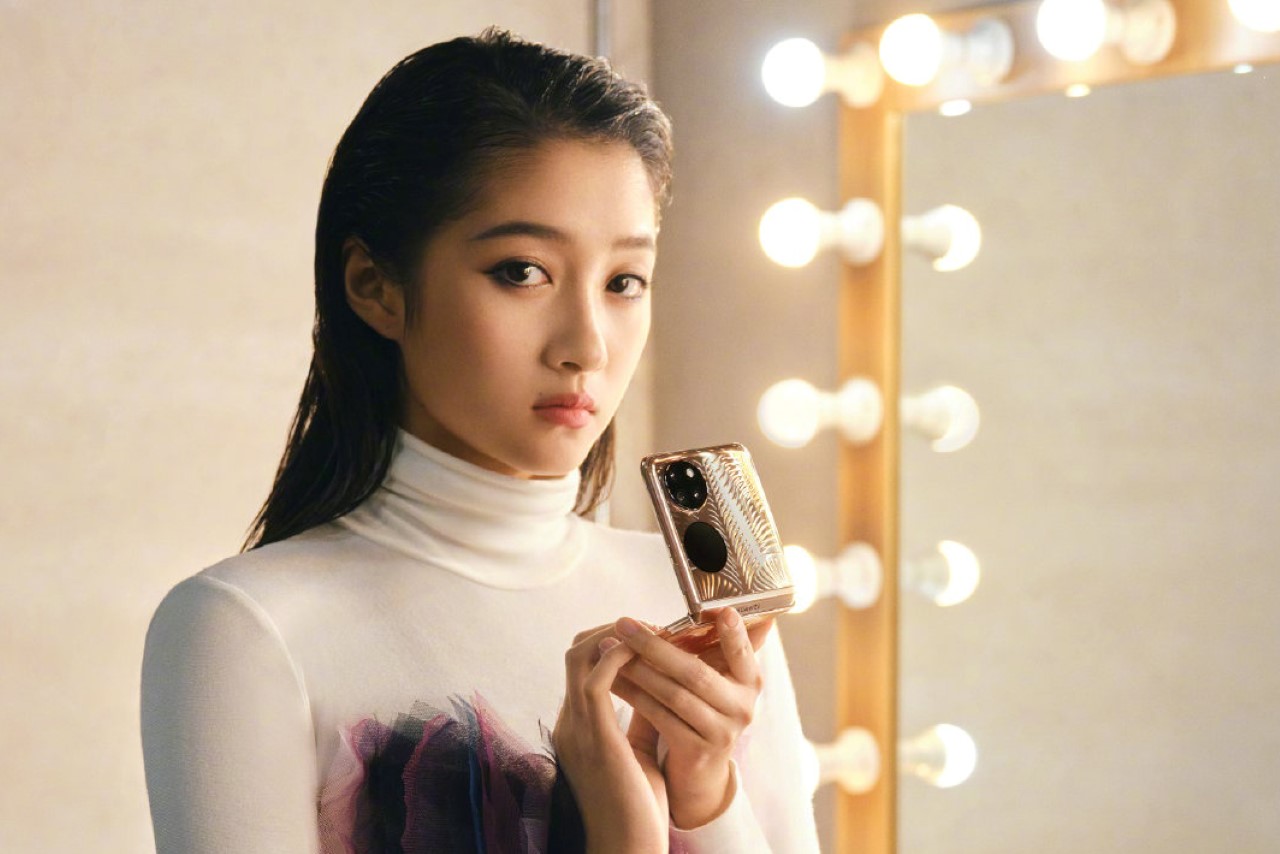 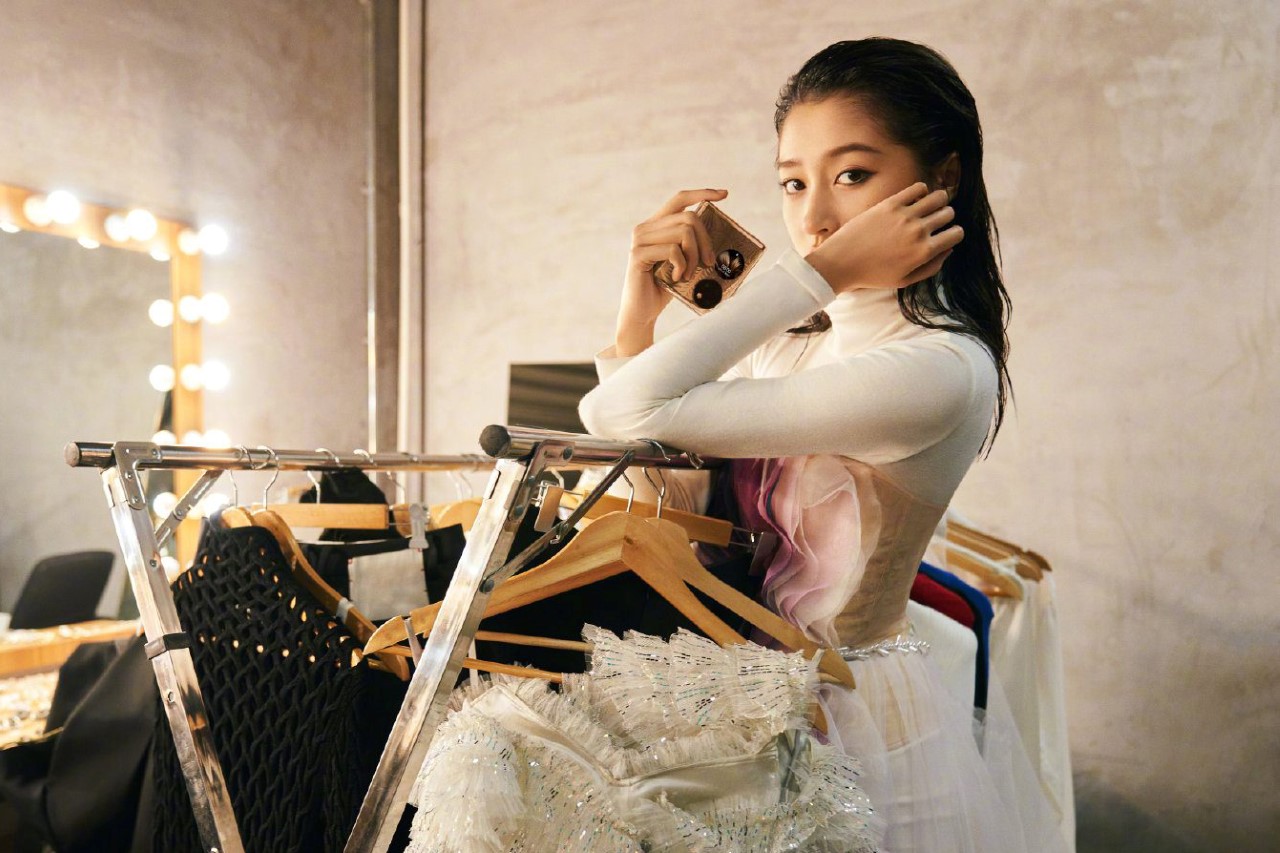 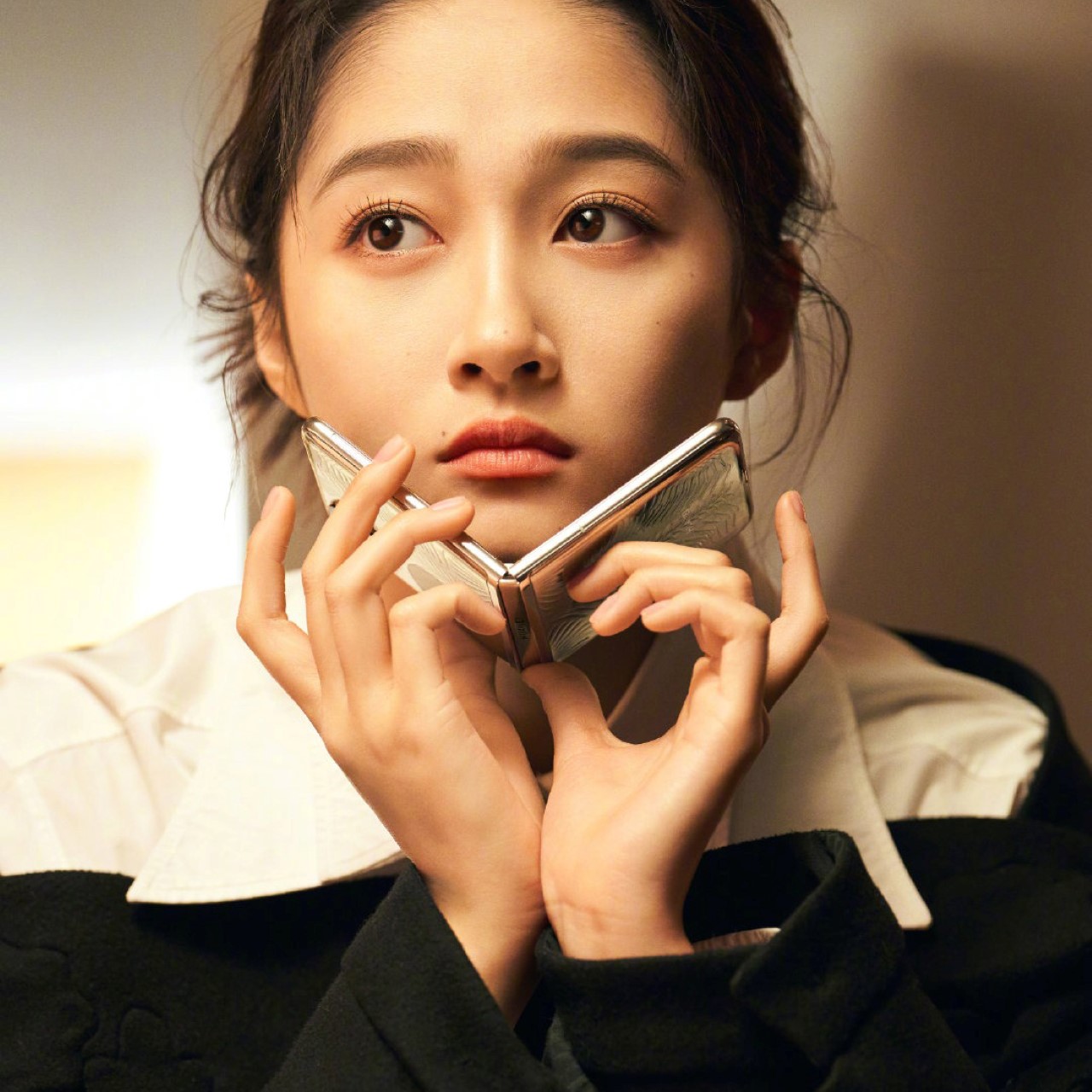 A Cable That Can Take All You Can Give It

https://youtu.be/Wwif2OcIGNU Every year, it seems as though the day-to-day hustle gets busier and busier, and we find ourselves searching for more hours in the day….

Can your smartphone repel mosquitoes??

I’m standing on a fine line between highly amused and highly impressed with the LG K7i. Coming from India, and a scenario where necessity is…

Circle Phone, Going Back To Simplicity

I will give you a prediction here and now. The upswing in high-tech technology integrated into every facet of our lives will soon (say 5+…