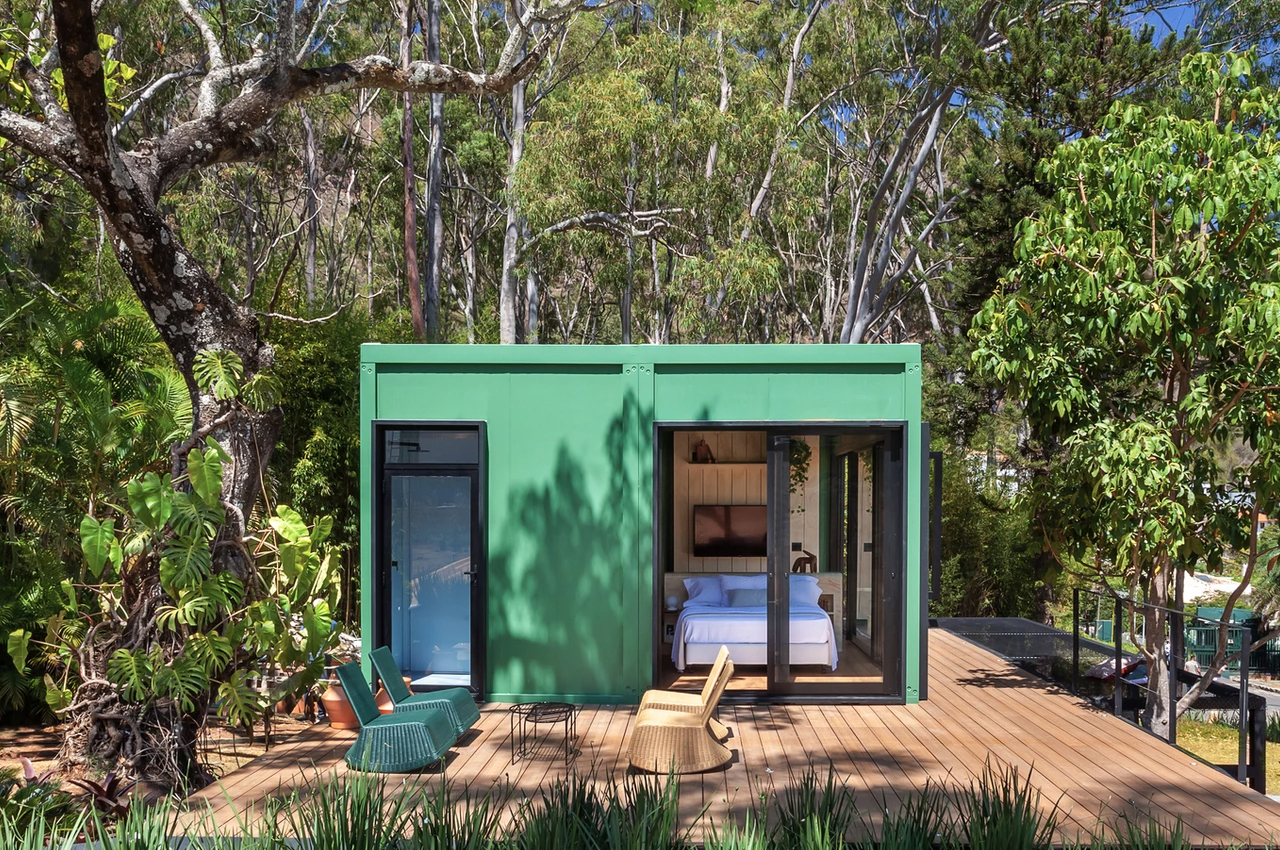 The variations of tiny homes today seem to be endless. We’ve seen tiny houses with roofs that unfurl and expand to reveal concealed bedroom lofts. Then, there are the tiny home designs that can be assembled from flat-pack DIY kits. However, the most frequented choice for designers and architects of tiny homes has to be disused shipping containers. 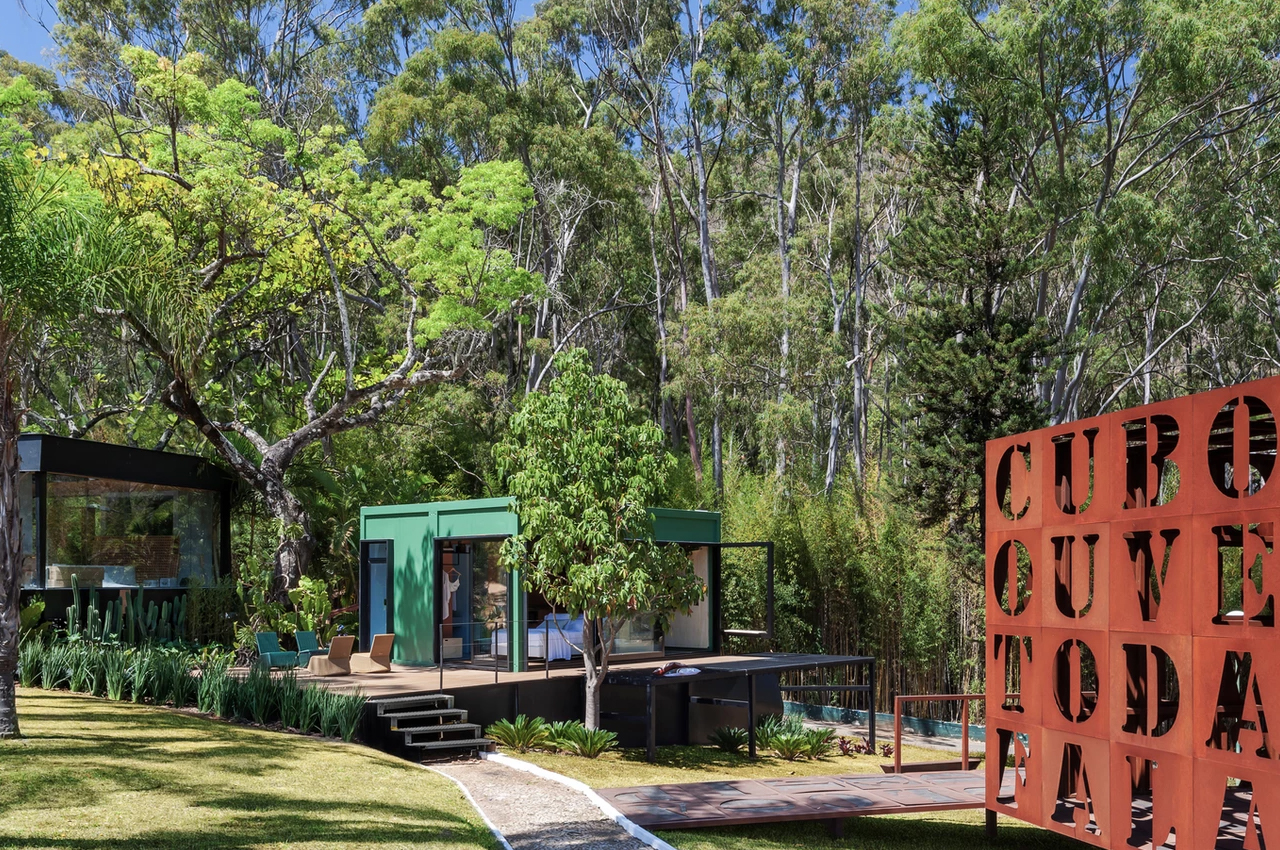 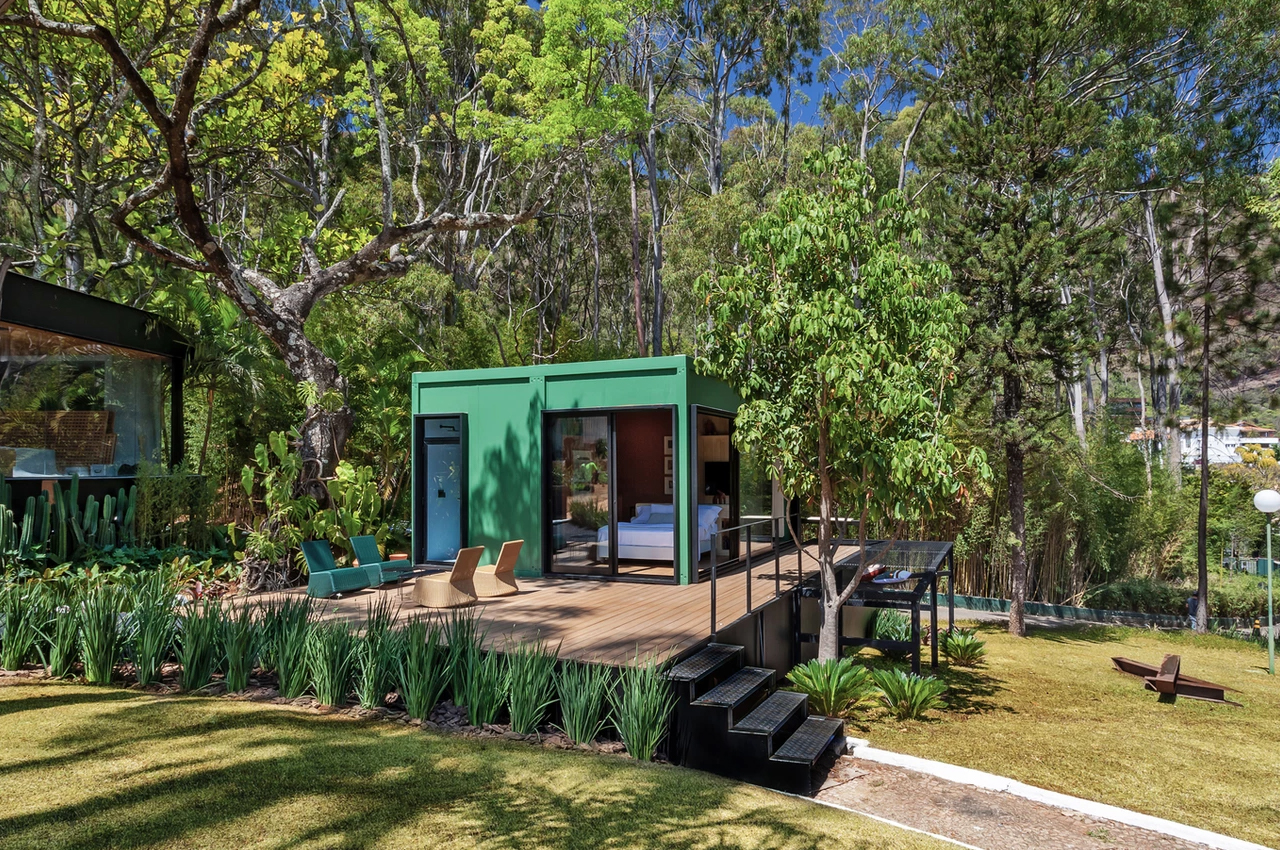 By design, the corrugated steel boxes are prepared for every season and all the elements that come with them. In Belo Horizonte, Brazil, Plano Livre, a Minas Gerais-based architecture studio, designed and constructed Estúdio Lapinha, a tiny home formed out of two conjoined shipping containers. 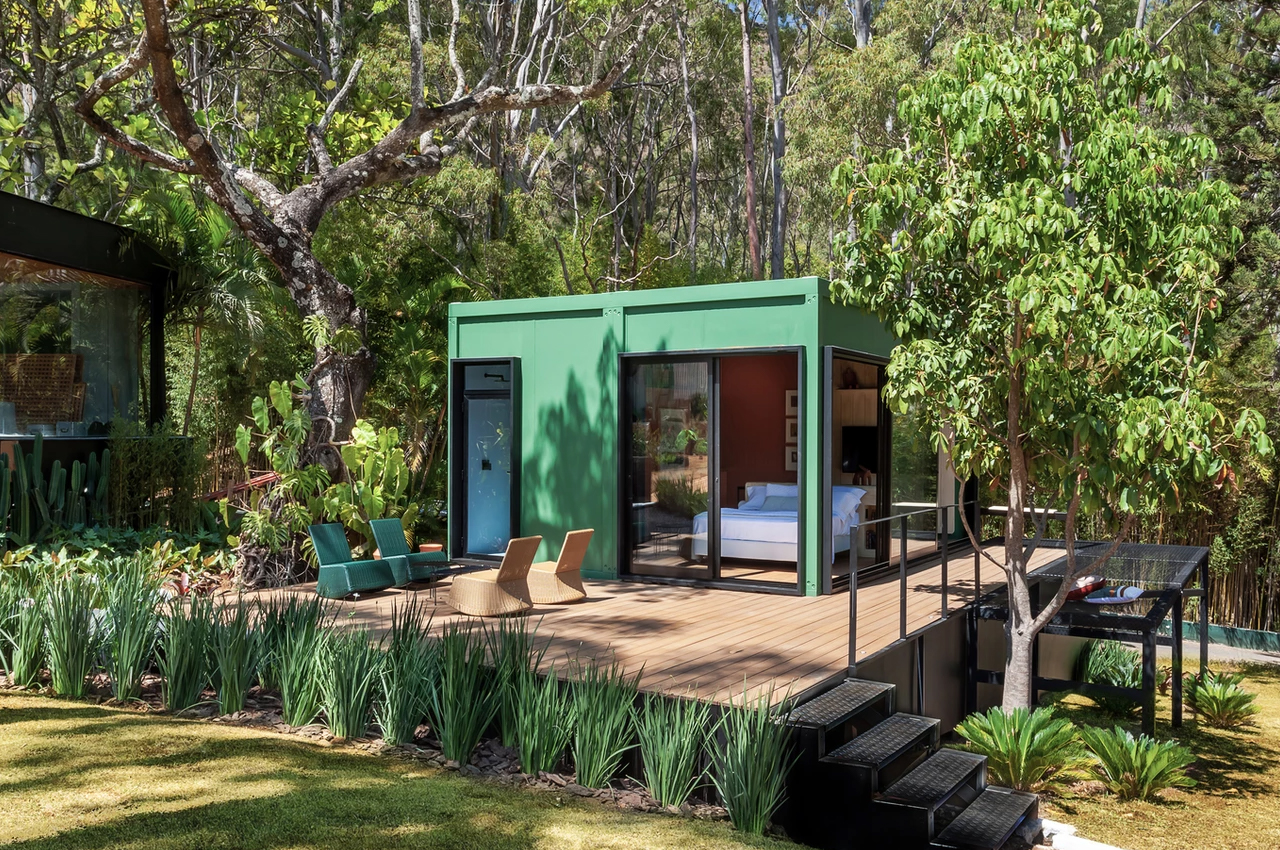 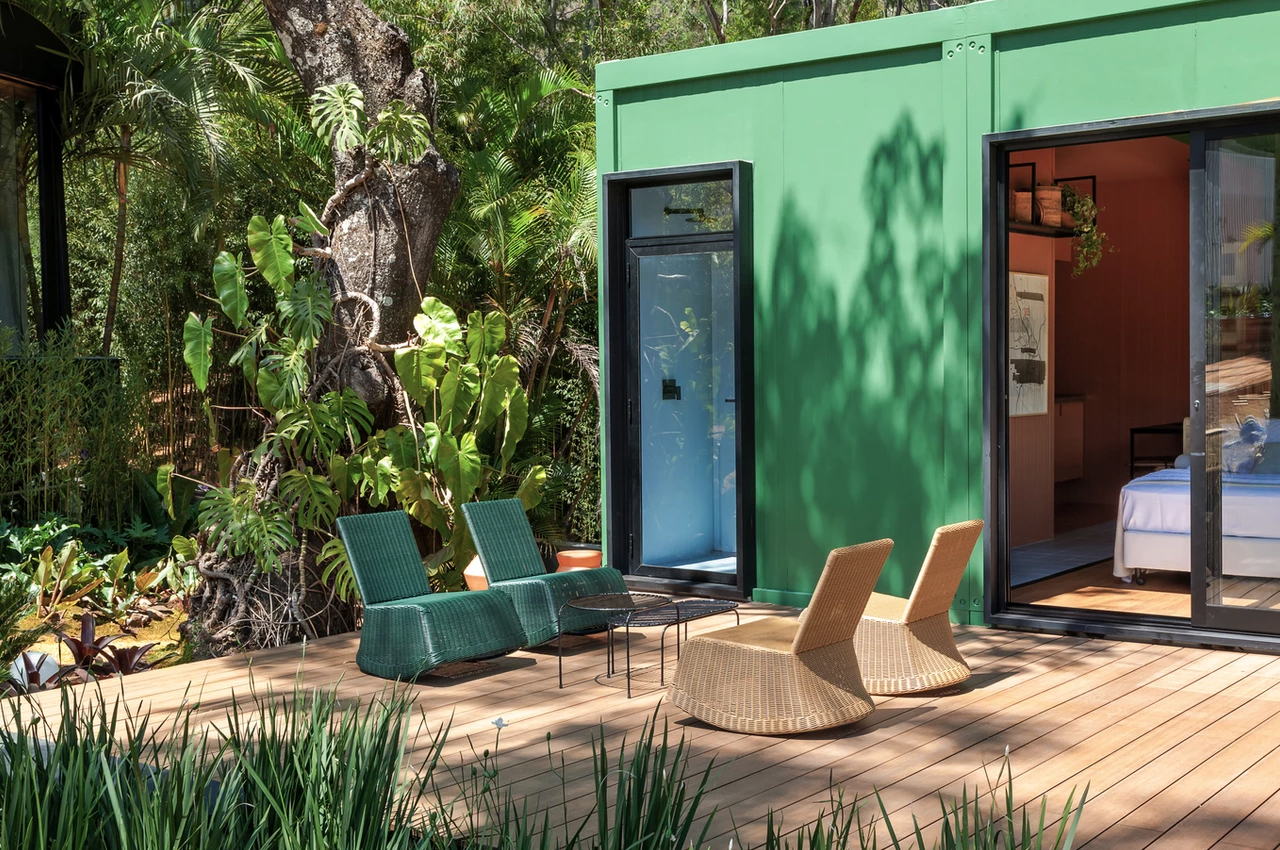 Initially conceived for Casacor, an annual architectural show that takes place in Minas Gerais, the infrastructure and layout of Estúdio Lapinha were designed to be transported from Casacor’s exhibition space to a permanent residence. Finding transportability in shipping containers, the architects at Plano Livre merged two together to have one function as an infrastructural module and the other as the home’s living module. 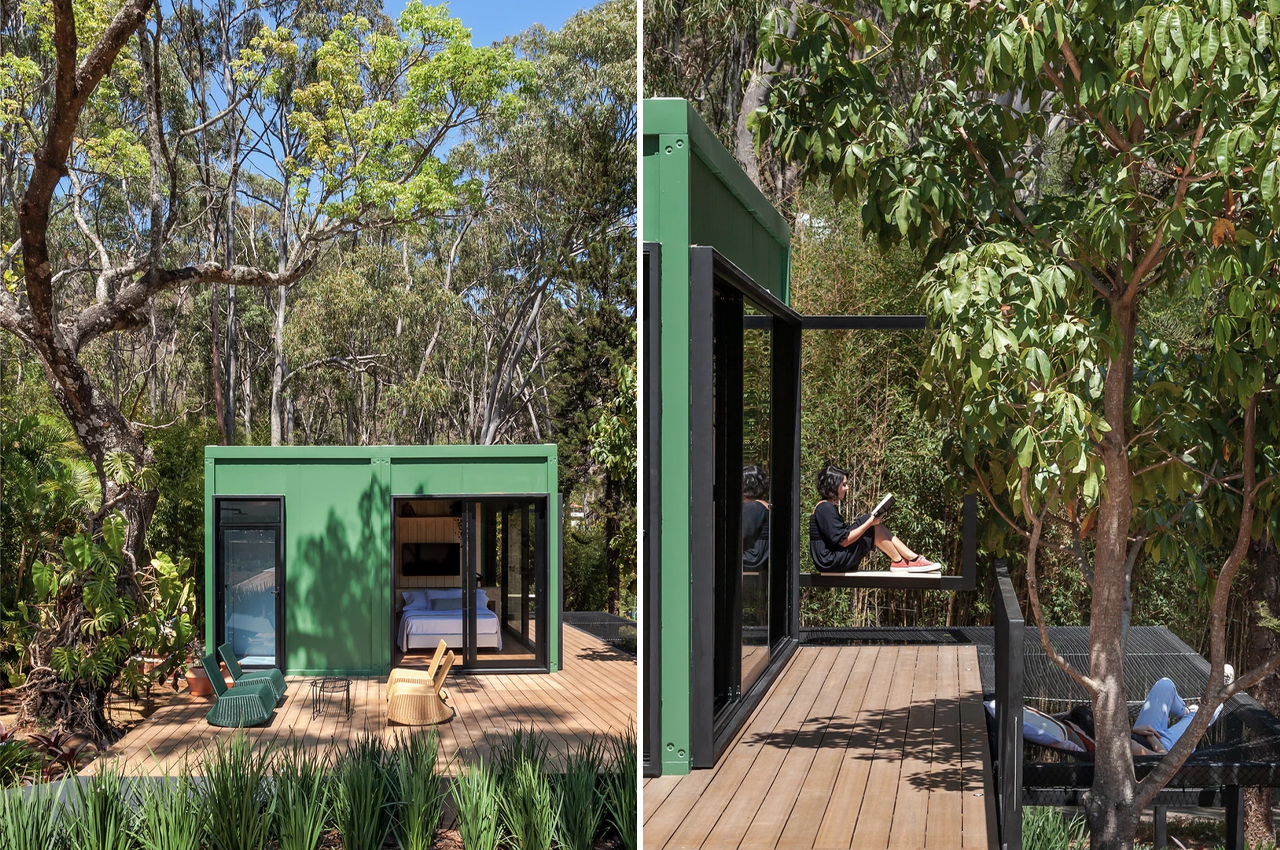 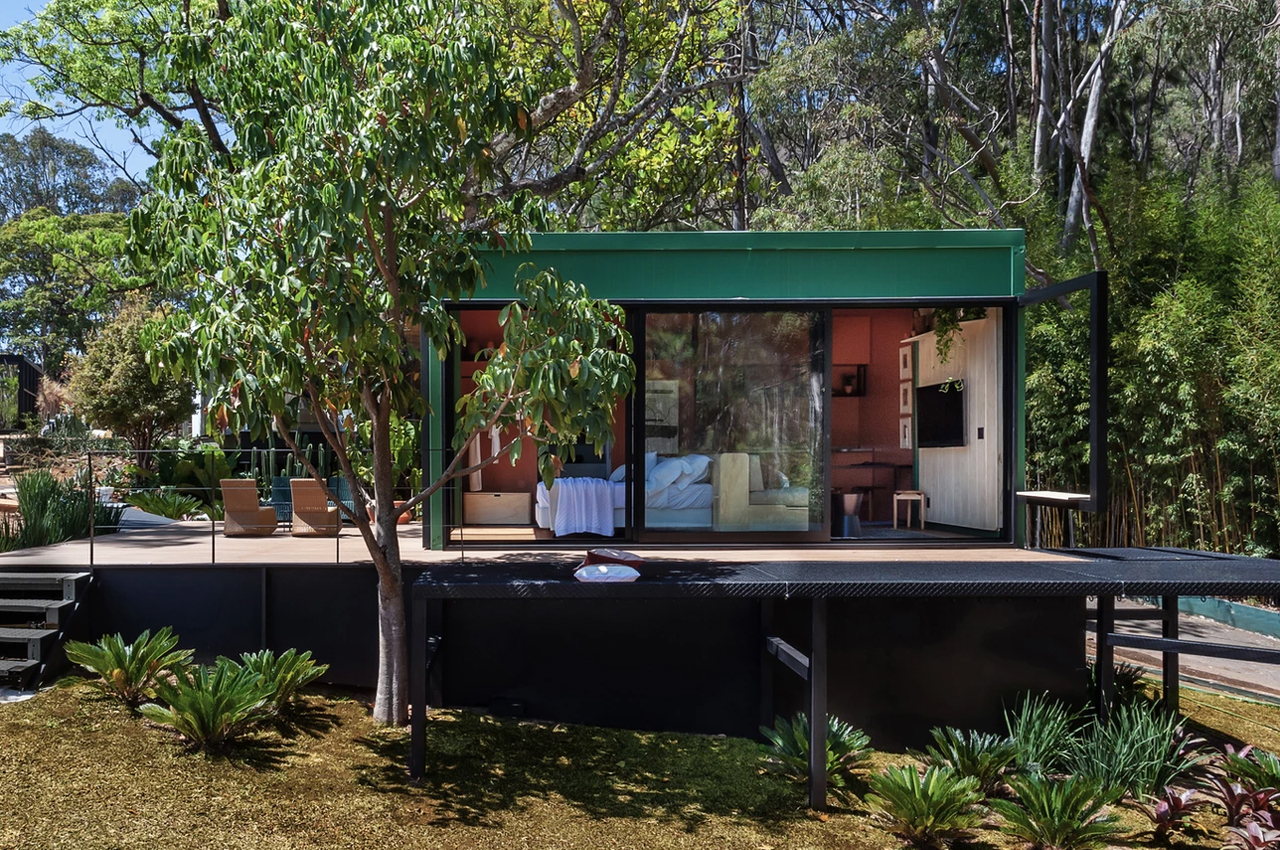 The hydraulics of Estúdio Lapinha reside in the former module, while all of the home’s furniture and living spaces are located in the latter. By creating a dynamic tiny home out of modular shipping containers, Plano Livre constructed Estúdio Lapinha to be flexible and indeterminate in shape and size–a tiny home that can be expanded upon over time. 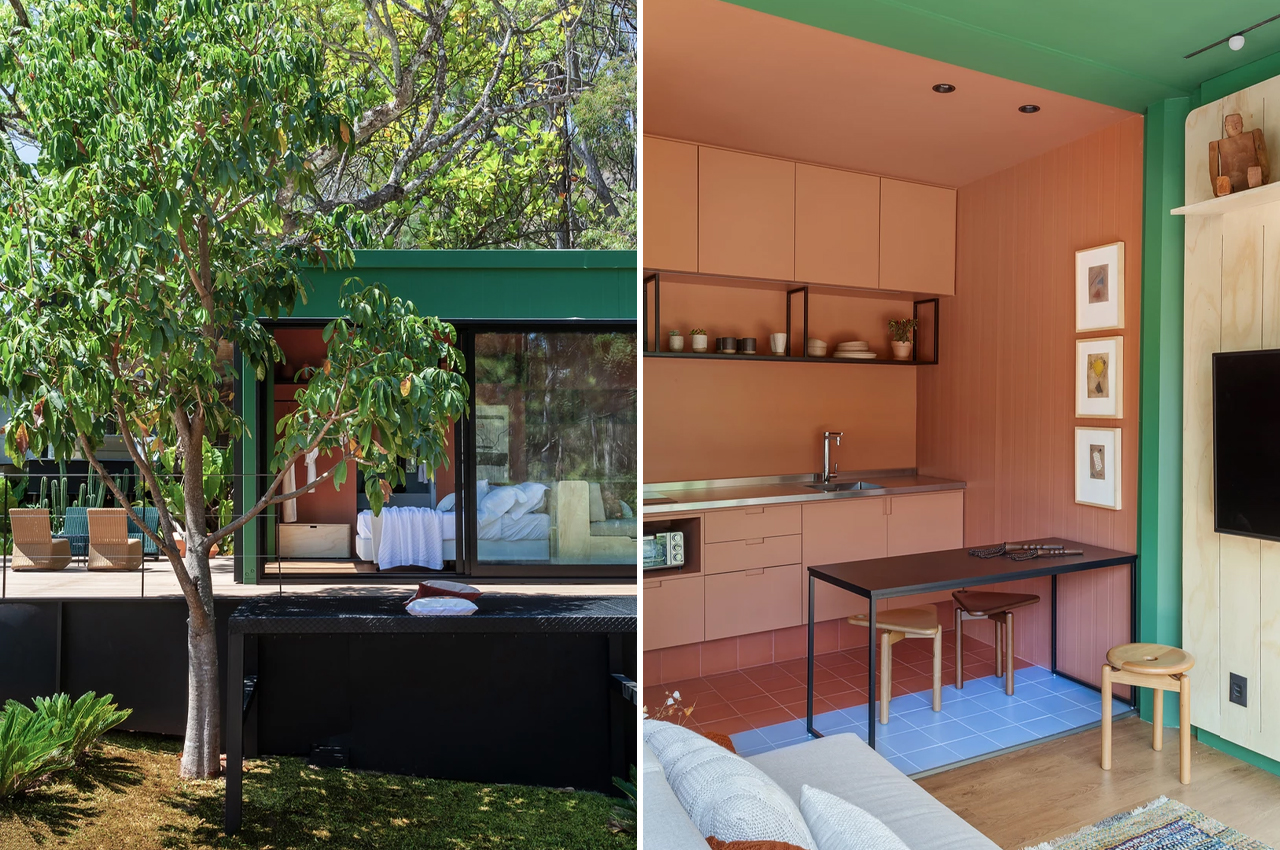 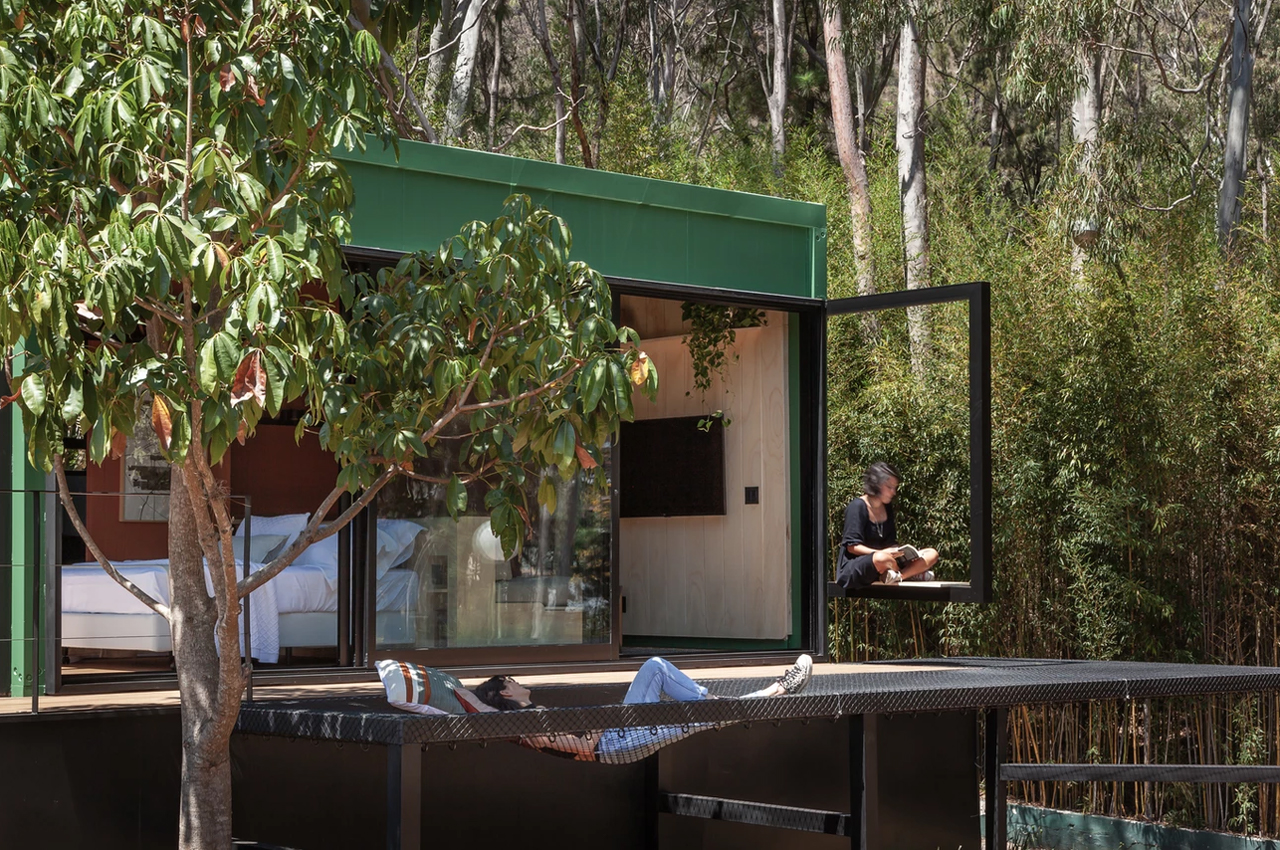 The tiny home’s exterior has been painted a muted lime green to complement the lush greenery that surrounds and completely immerses Estúdio Lapinha. Propped up on a wooden patio, Estúdio Lapinha finds height and rises alongside the trees and tall grasses nearby. Located on one side of Estúdio Lapinha, residents can lounge in a trampoline hammock just beyond the main bedroom’s expansive French doors. 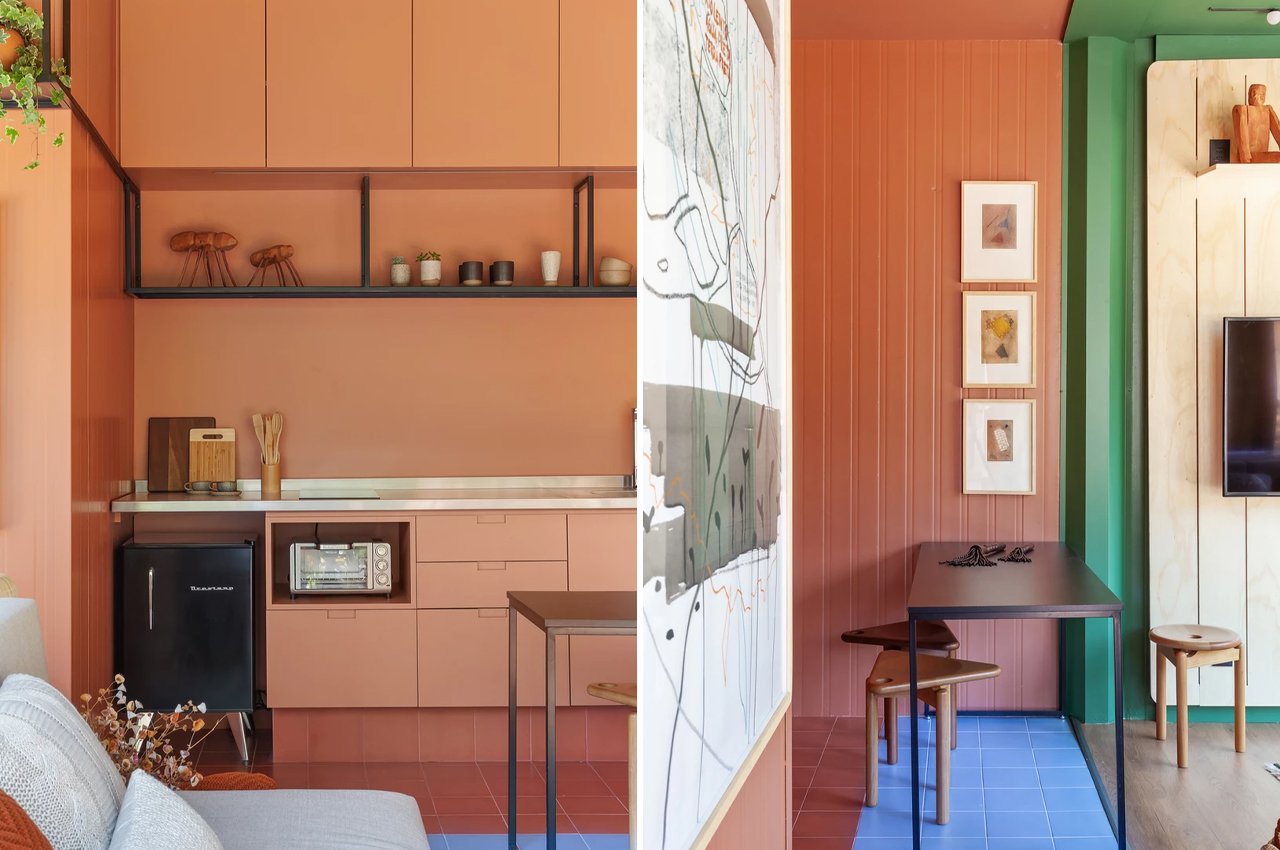 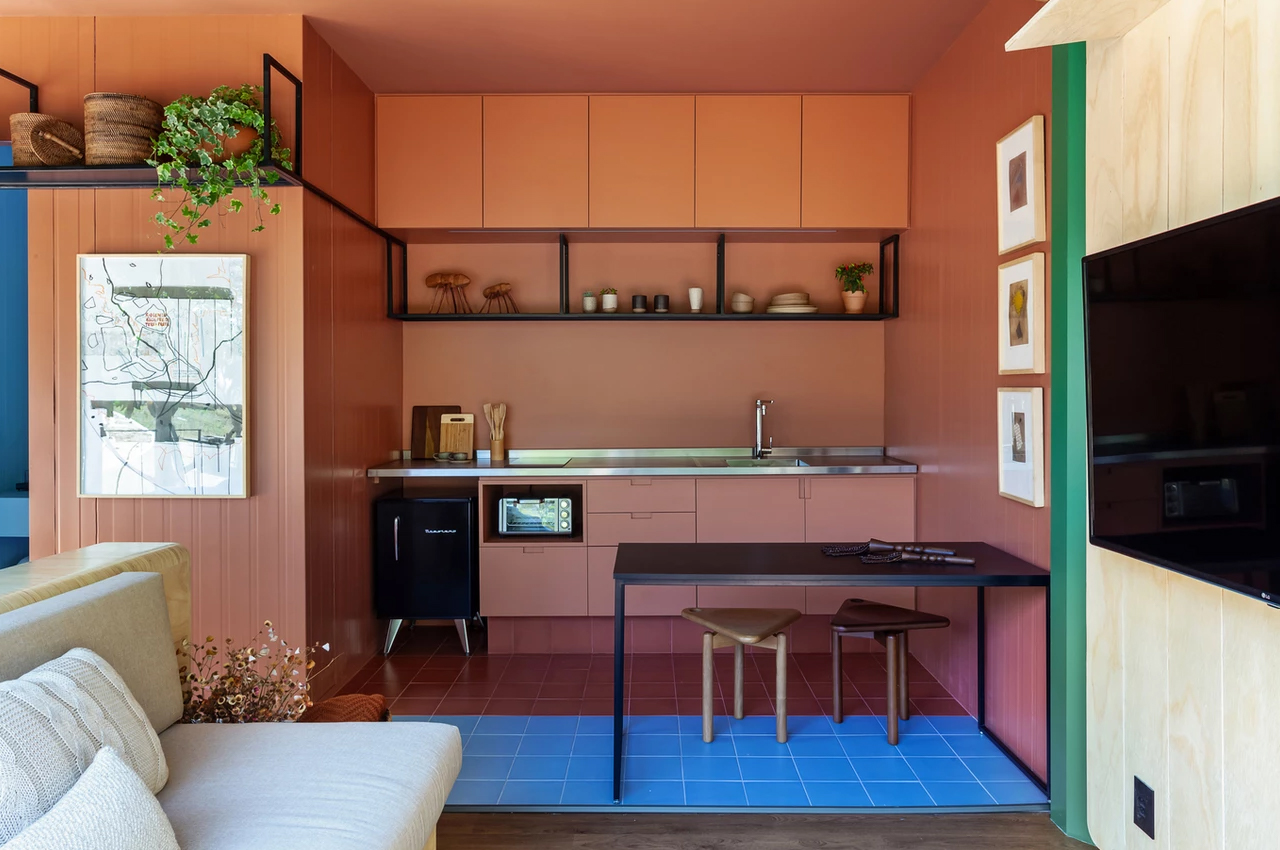 Inside, bright painted walls and tiled flooring delineate each room and pay homage to Brazil’s colorful personality. The living and sleeping areas are the only parts of the home that find warmth in natural, unstained wooden paneling. The sofa’s back doubles as the bed’s headboard to provide a subtle and functional partition. 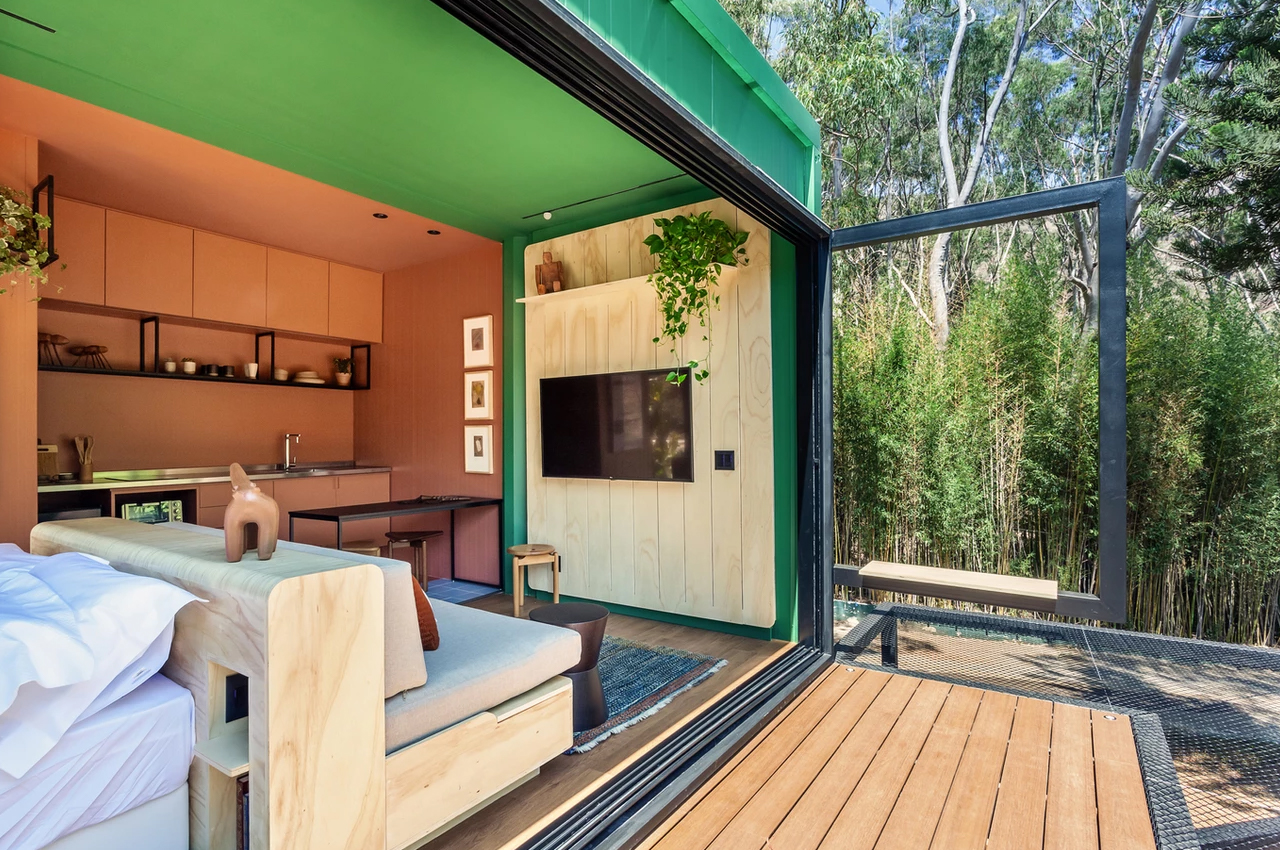 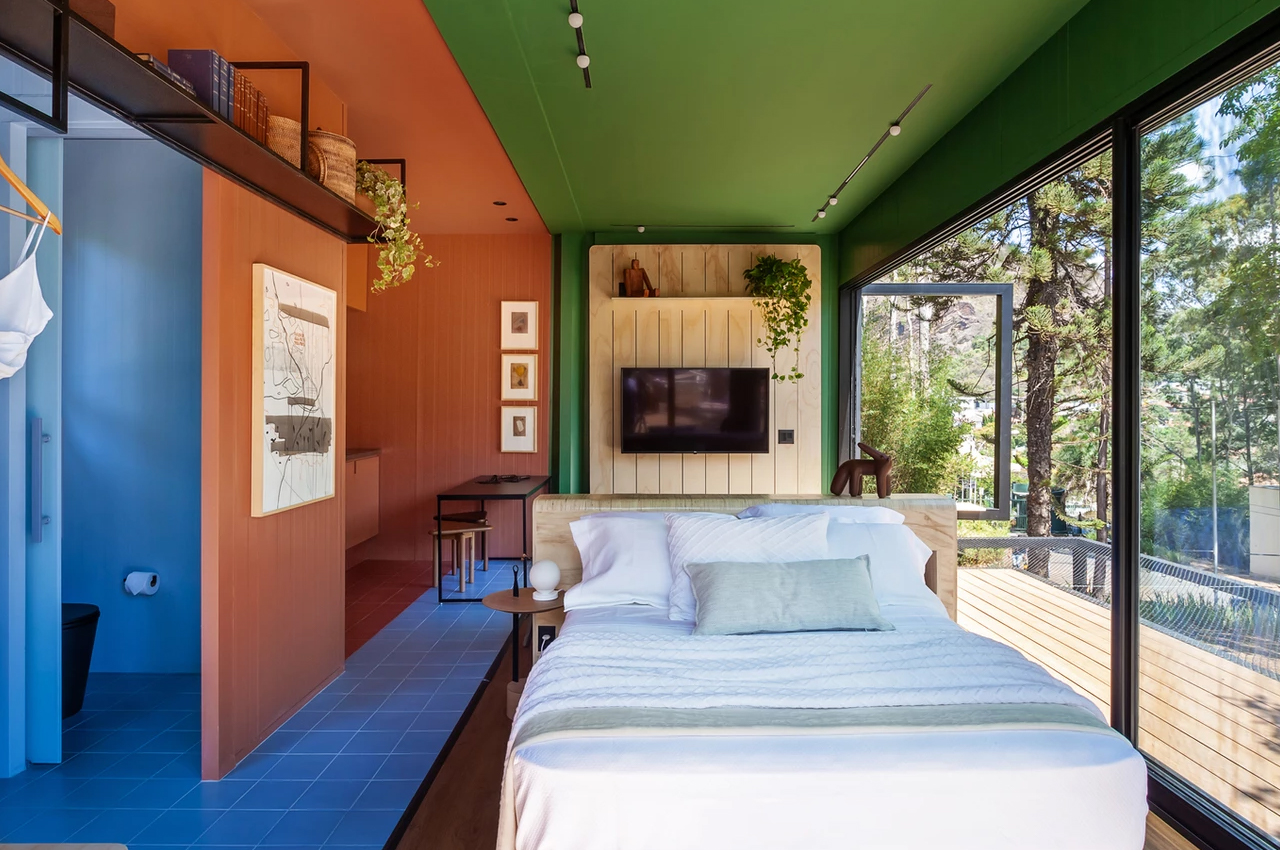 Throughout the home, steel shelving units provide extra storage space for bulkier items like heavy books and houseplants, tracing the ceiling from the kitchen to the cerulean blue bathroom. In addition to the expansive, floor-to-ceiling French doors, the home’s ceiling is painted the same green as its exterior to bring the home that much closer to the outdoors. 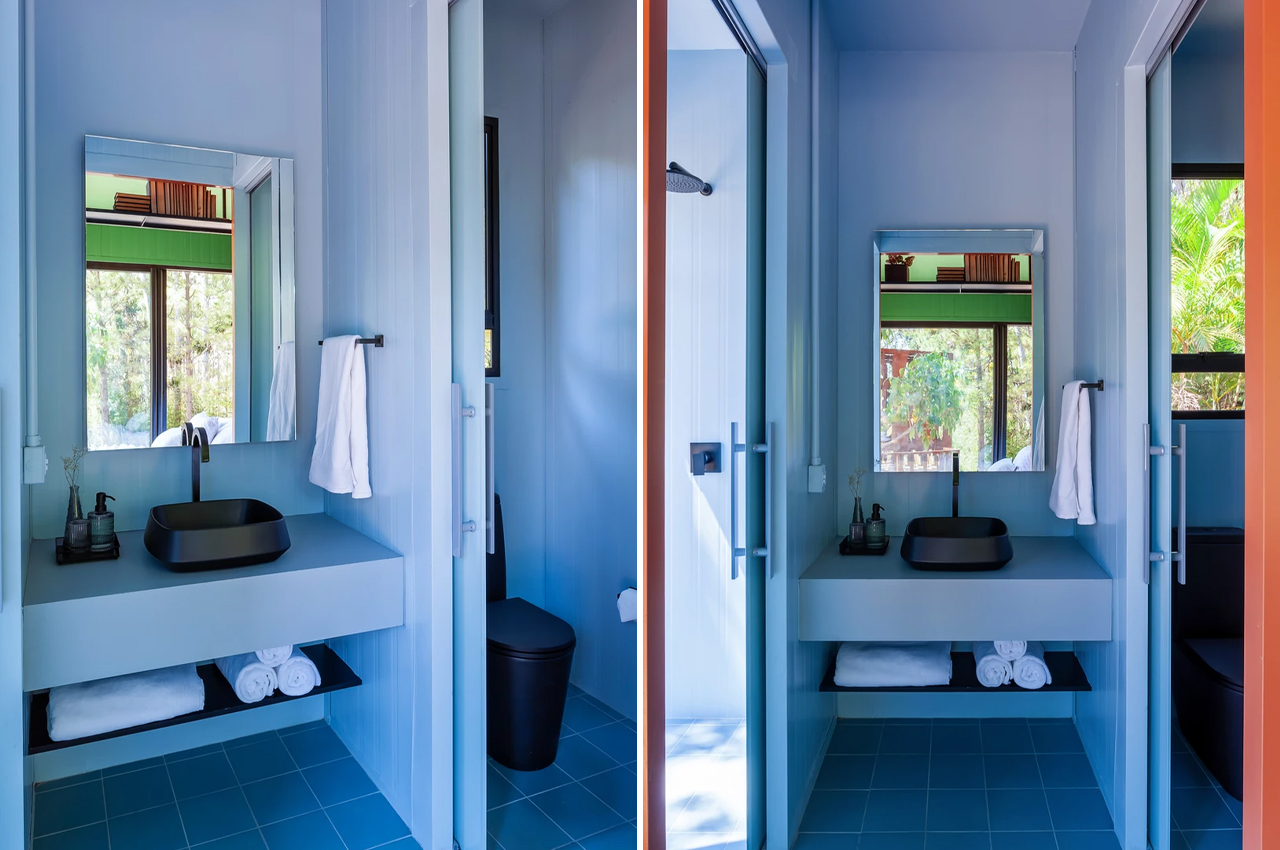 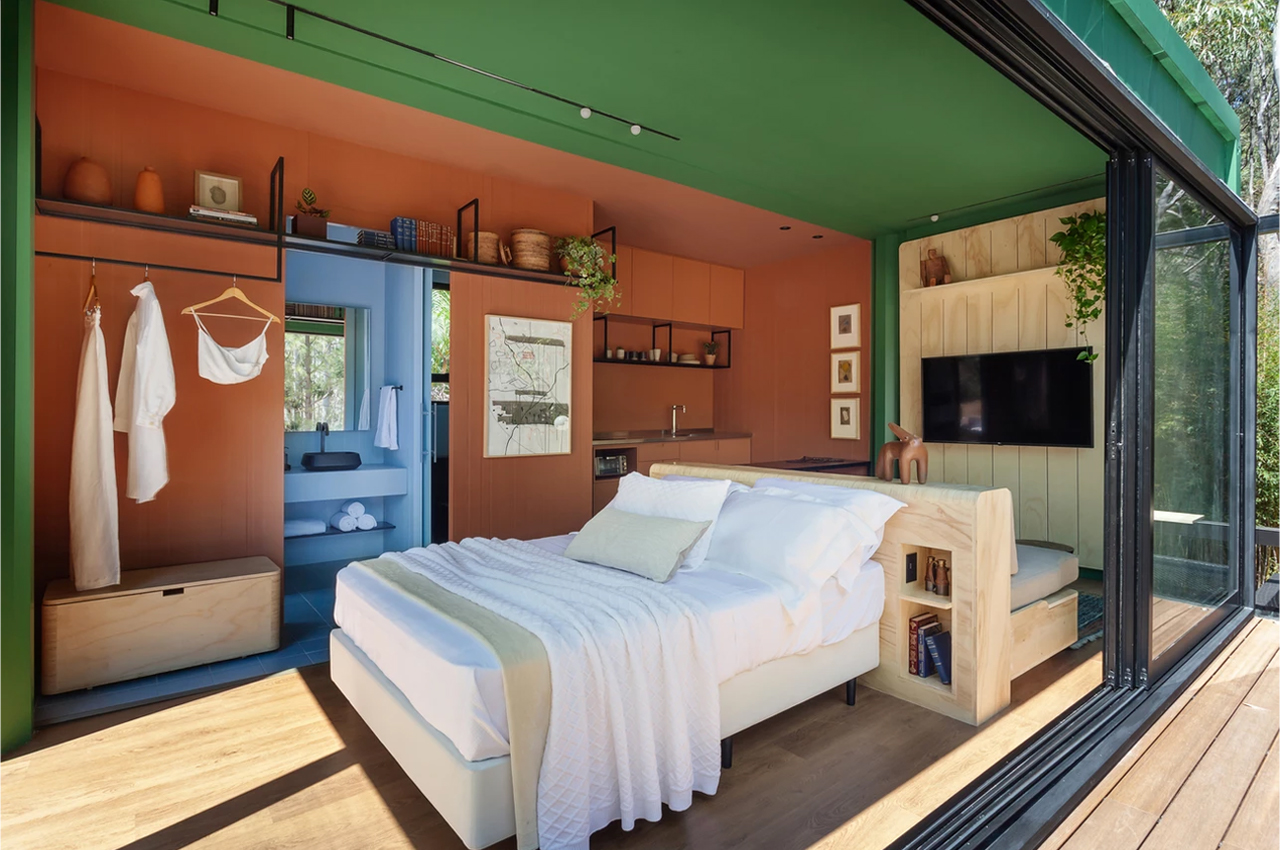 Sliding floor-to-ceiling glass doors dissolve the barrier between the studio’s insides and the surrounding outdoors.

The interior walling decoration subdivides the content in a cell-like system. Physically, the liquid acts with a stable and steady gravity point making it easy…

This floating health + wellness sustainable spa gives you an immersive experience in nature!

I love a floating cabin but when it comes with a floating spa?! That is the ULTIMATE off-the-grid holiday. This luxury getaway is everything you…

David Mellor, the eponymous founder of this illustrious British company, was one of the most important designers of the 20th century. Now, as creative director,…

Designed to be used in apartments and small interiors, Nohoanga (seat in Maori) is designed to be portable. The shape of the seat echoes the…