If you’re the kind of person to simultaneously live in the 80s as well as the 2020s, the Nextube may be just the perfect little desktop accessory for you.

While I love what Apple, Google, and Amazon have done to uplift the home and bring it into the 21st century, one could posit that their devices were designed more to blend in than to stand out. A Nest door camera doesn’t scream for attention, the doorbell itself looks decently sophisticated, and the smart speaker inside your house is almost always a neutral color and form, so it ‘becomes a part of your home’… just as intended. These accessories add features and functionality, but rarely do they add character. That’s a school of thought that eludes most design/tech companies, because they want to build a product that fits beautifully into all sorts of homes – but predominantly Euro-American homes which are increasingly moving towards adopting minimalism. The Nextube, however, was designed for the flashy, retro-loving maverick. 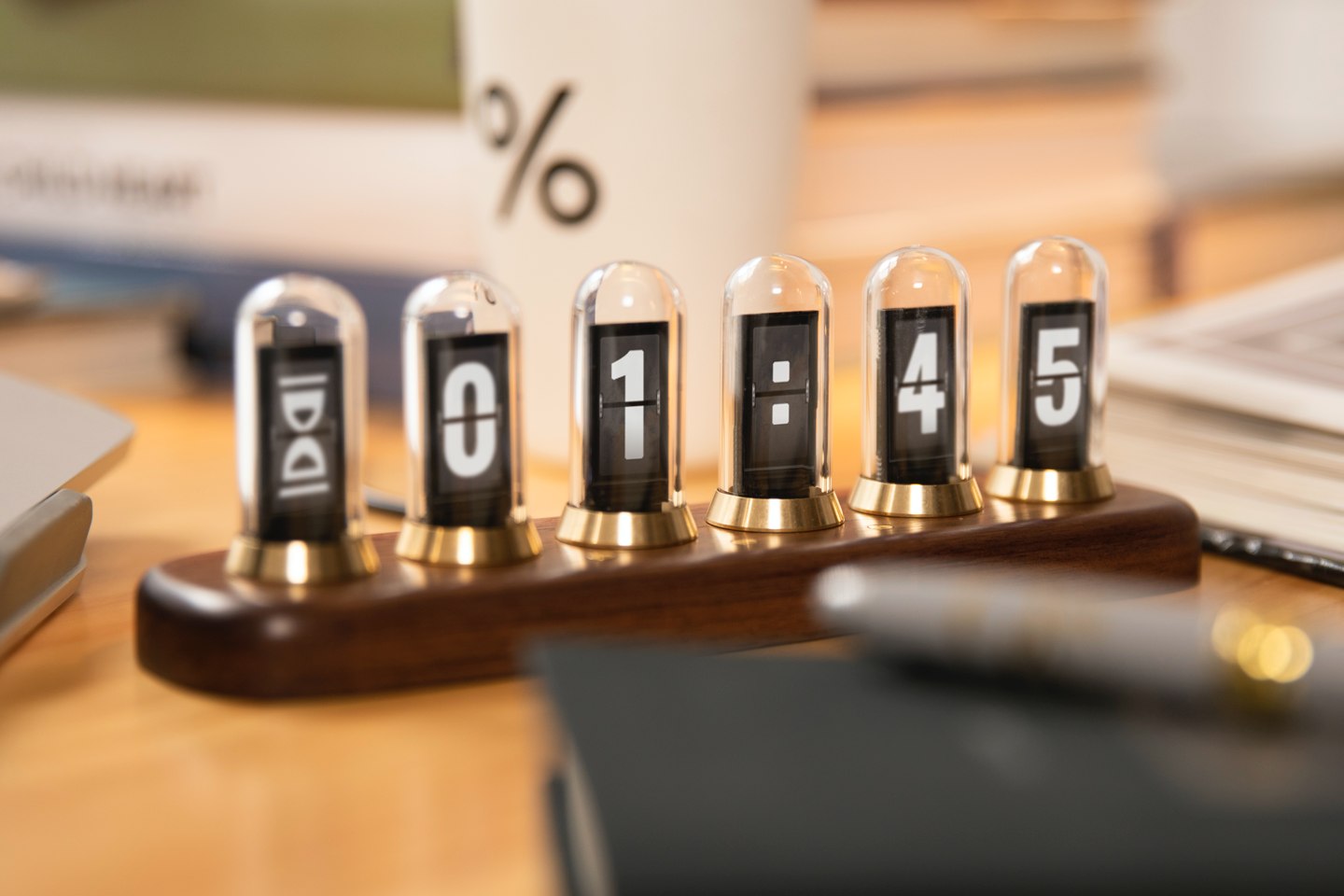 The 70-80s were the farthest thing from minimalism. The music was loud, the fashion was colorful, cyber-synthwave was all the rage, and it was arguably the birth of modern tech, with video-games and computers becoming household objects, and the Nixie Tube increasingly becoming a signature element in sci-fi pop culture. Nixie tubes gradually died out in the 90s-2000s as the technology around cathode-ray tubes, and then LCD and LED displays began developing. However, unlike tech (which progresses linearly), culture is cyclical, and retro-tech is making a comeback. The Nextube is a product of that cultural throwback but relies on today’s tech. It mimics the raw, retro appeal of nixie tubes, but given how rare these tubes are (since they stopped production in the 90s), the Nextube uses a clever set of mini LED displays encased in vacuum glass tubes. Complete with a neat walnut wood base and brass trims, the Nextube looks like something from an 80s laboratory on your desk. The steampunk gadget comes with 6 individual displays that tell the time as well as the weather, in that gloriously vintage nixie-inspired glowing font. 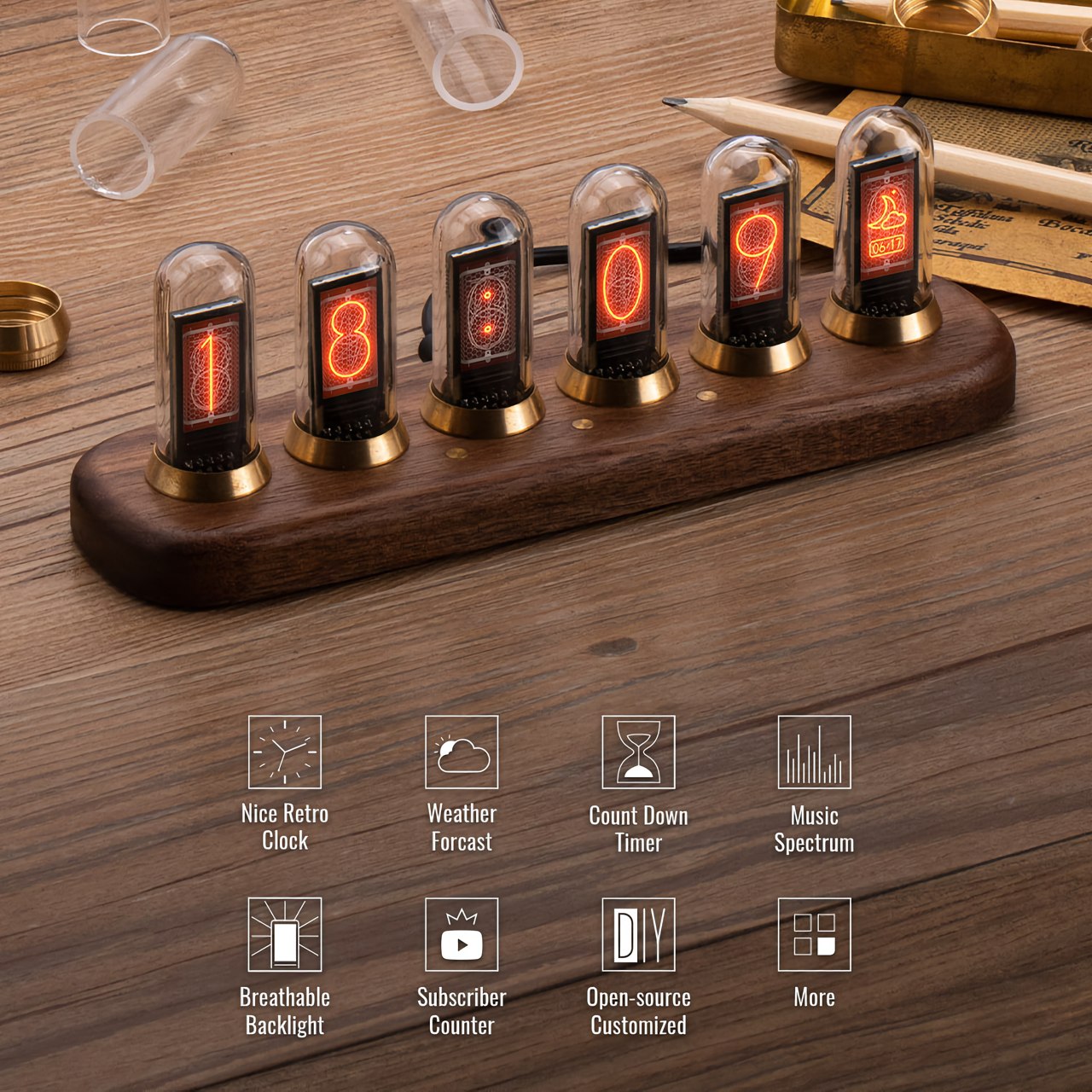 A clever play on the words Next and Nixie-tube, the Nextube is a little retro and modern mashed into one gloriously steampunk device. Its primary function is that of a tabletop clock and alarm, however, the 6 mini displays can be programmed to display practically anything, from the weather to your YouTube subscriber count, the price of your favorite cryptocurrency, or even a countdown clock for a pre-set date/time. The Nextube’s mini displays aren’t limited to the Nixie-tube font either. Outfitted with LED panels, the Nixtube’s mini displays come with an array of retro-inspired fonts, including dot-matrix, seven-segment display, flip-clock, and a variety of cyberpunk-inspired fonts and themes. 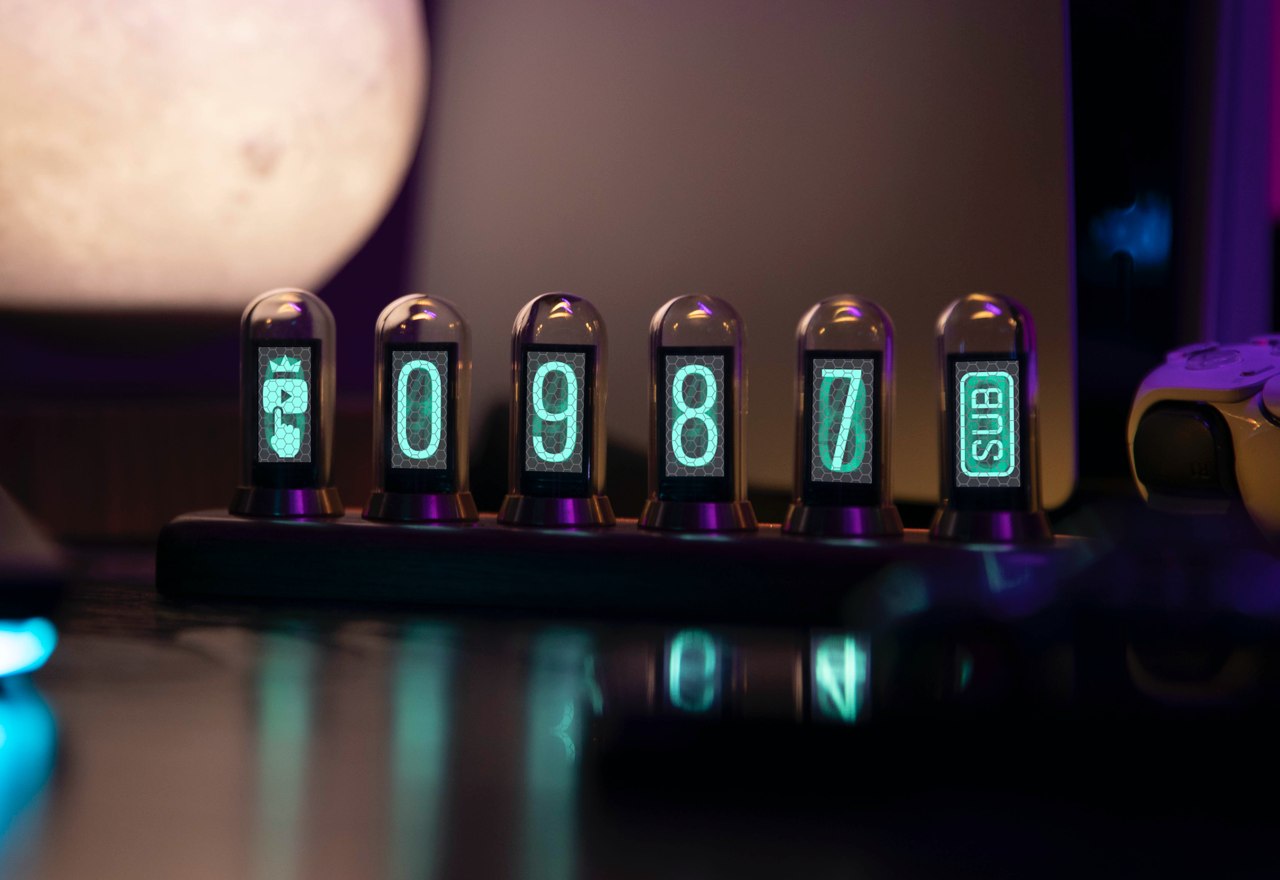 Monitor your sub counts in real-time. 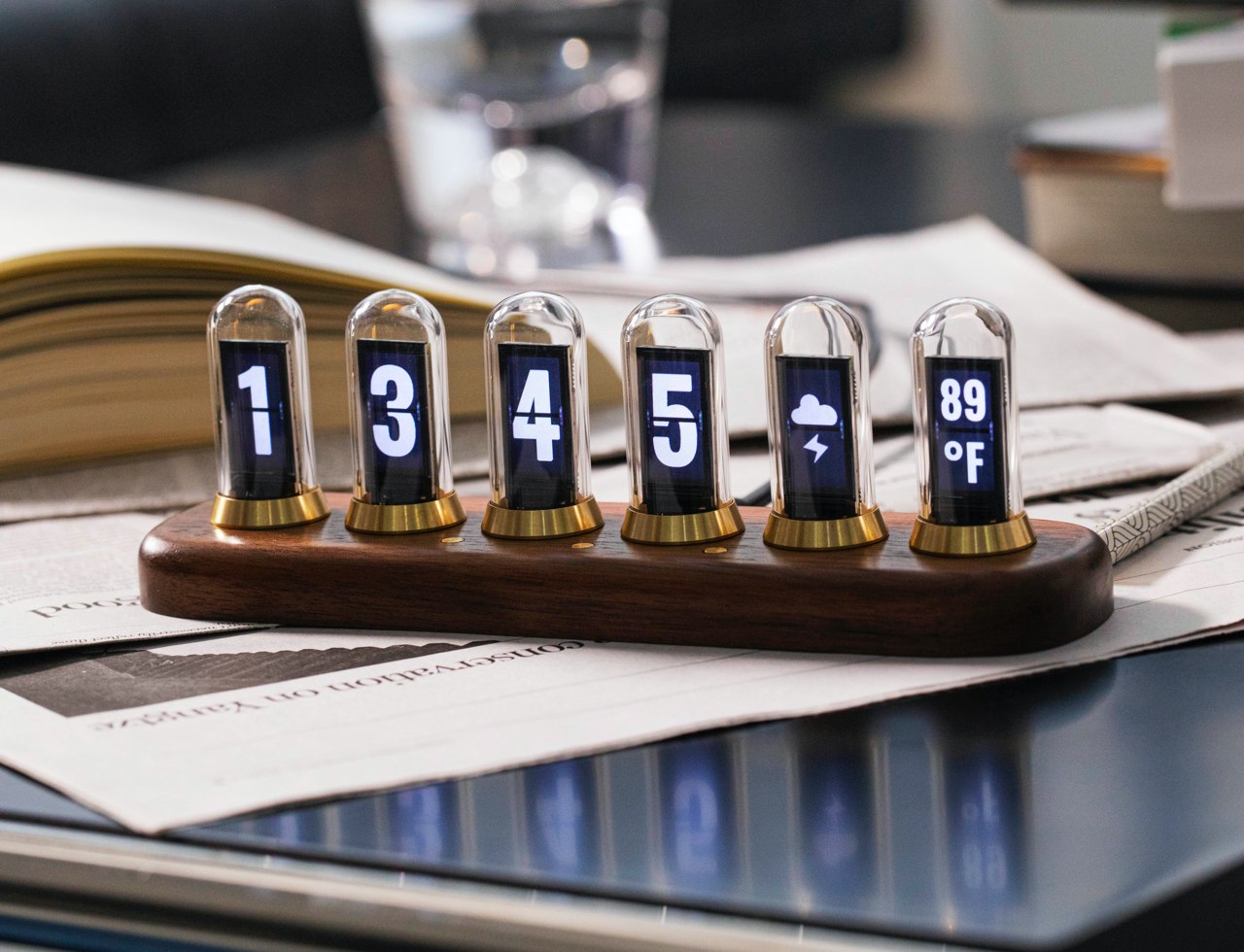 Know the weather at a glance.

Dance with your favorite music.

Armed with open-source firmware, you can practically program the Nextube’s mini-screens to display anything, from motivational messages to calendar alerts, email notifications, or even tiny pictures from your camera roll. Small buttons in front of the tubes allow you to toggle between the Nextube’s various functions, and a spectral analyzer built into the Nextube’s body even lets you turn it into a music visualizer, with dancing bars that respond to any music that’s playing. 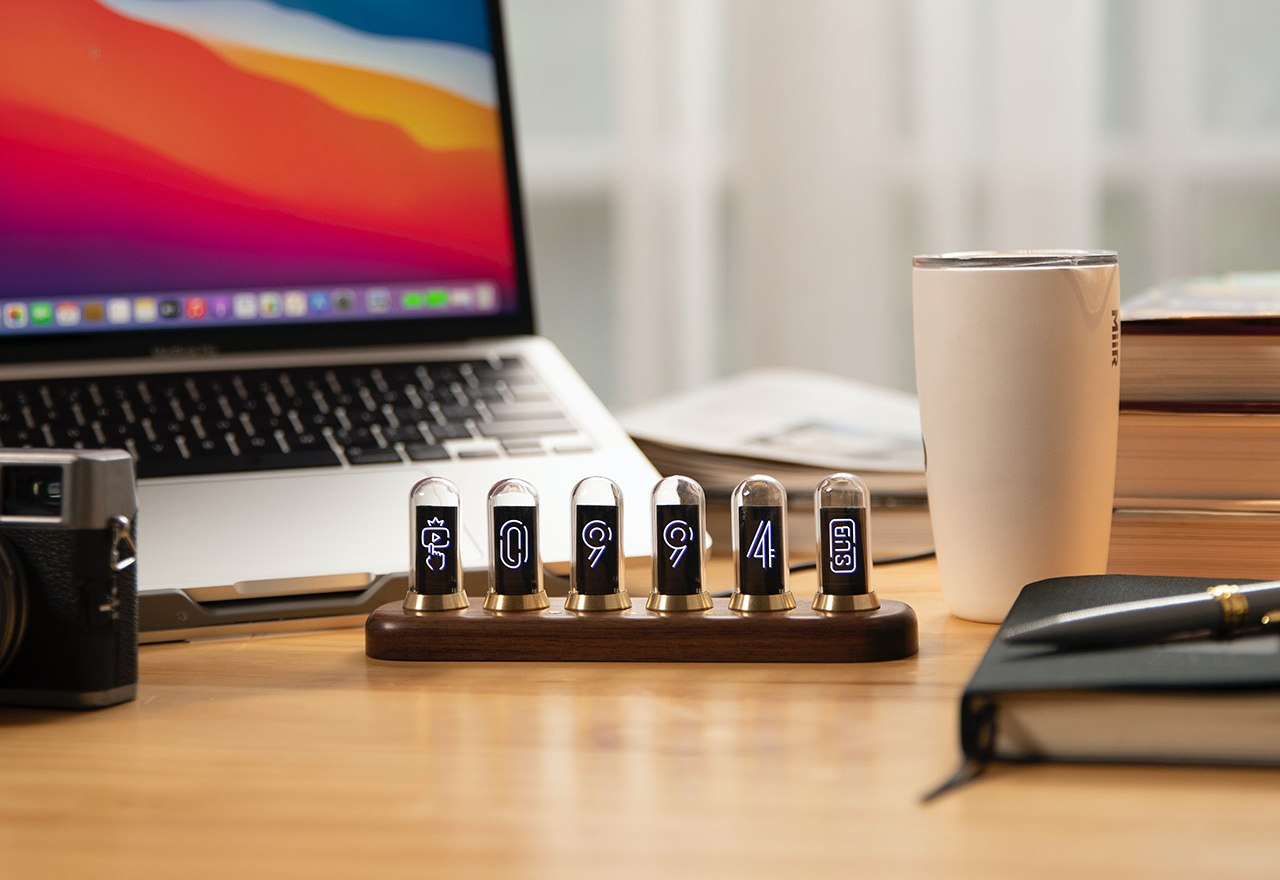 While it does look exactly like the kind of product you’d see in the background of a YouTuber’s setup (we’re thinking on the set of MKBHD’s Retro Tech web-series), its versatility means you can place the Nextube anywhere, from your work-desk to your bedside table, kitchen counter, or even living room coffee table. Wherever you put it, the Nextube’s commanding presence and wonderfully nostalgic retro-vibe instantly make it an eye-catching centerpiece – which easily sets it apart from the other ‘boring-looking’ smart-home appliances you may have lying around your place. The IPS displays ensure incredible visibility no matter what angle you view the Nextube from, and all you really need is a power source to connect the device to. The Nextube is available on Kickstarter for $149 – it comes bundled with a USB-C cable, charging brick, and Nextube’s open-source software; and ships globally with a one-year warranty.

I’m all for brain teasing toys but I never had a knack for them. I blame my parents. Don’t make the same mistake and get…

If you’re looking for something with a sense of humor, then may I suggest The Bathroom Body Builders! Three muscle-rippling hunks that put any WWE…

Got a first generation Apple TV laying around and wondering what to do with it? Daniel Kurt came up with the idea of recycling it into…

A New Look at Drains

At a time when we see most designers concentrating on personal products, we have here InHo Lee who is concerned about the ways to improve…